A wonderful coincidence happened today. As I began looking through this week’s images looking for a possible theme, I noticed that many of the images had a certain agitated or blurred look to them and since my other passion, besides art, is music, an inevitable song emerged, this time; “Shake, Rattle and Roll” made famous by American rock and roll band Bill Hayley & His Comets. The coincidence is that this week’s lead image ***constructivism meets pop art*** by Sergiy Beliayev depicts a building in the Ukraine that was built in 1954, the same year that “Shake, Rattle and Roll” was penned by Jesse Stone. Some things are just meant to be…

…so enjoy the rest of this week’s selections from the following iPC Flickr members, where most of the images are shaken and rattled but some just simply, but no less beautifully Roll with it; so rounding out the group are Dragon Fly, Monowave, ritacall (Rita Colantonio), Keith Midson, Jean Hutter, Karen Axelrad, Tessfra, oola cristina, Paul Yan, Janice Grinsell and Salwa Afef.

If subscribe to the iPhoneographyCentral Newsletter, you are in with a chance of winning this signed, limited edition print TODAY! The winner will be posted here on the iPC website today and on all the social media channels: (Facebook, Twitter @iphoneographyC, instagram nickifitzgerald_photos and nickifitzgerald_iphoneart).

You can find more information about this month’s giveaway here.

I’m giving out iPhoneography gifts every month. For a chance to win a gift, you just need to be a subscriber to the iPC newsletter which is sent out just a few times a year keeping you up to date with iPhone photo art editing techniques, new videos posted and you’ll also be the first to hear about app promo giveaways.

Just click on the button below to sign up to our iPC newsletter for chance to win a gift every month! 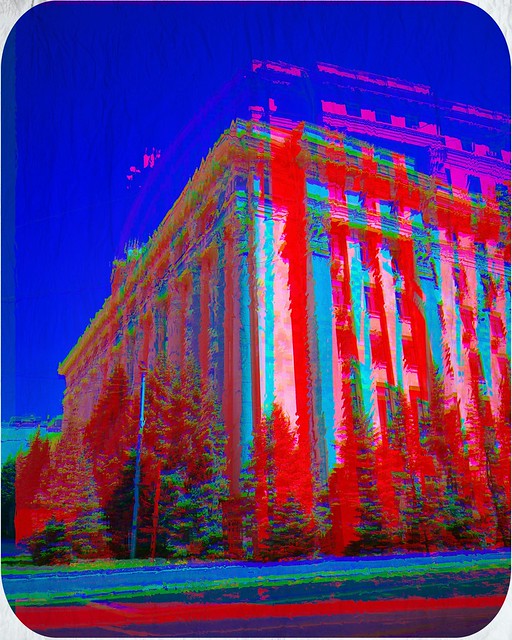 App used: the photo was shot on iPhone 7 Plus (I used Camera+ 2 app, as I usually do). Post-processed in Hipstamatic iOS app using ‘Joey’ Lens, ‘La Seine’ and ‘Apollo’ flash

Backstory: The building in the photo is the Kharkiv (Ukraine) Region State Administration. it was constructed in 1954 and designed in constructivism style (there is an opinion that Kharkiv is “the capital of constructivism”), which was very popular in times of soviet dictatorship. I shot the building from this angle and then while editing the photo decided to try some pop art taste on that echoes of the dark past. 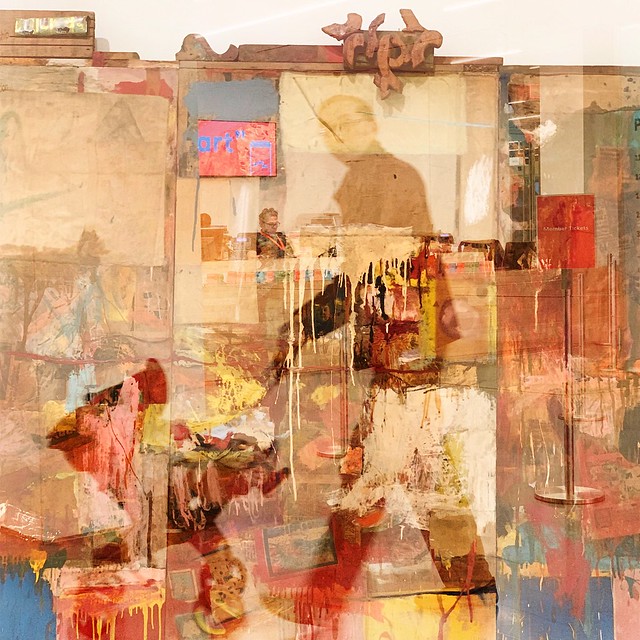 Man with Buggy by Karen Axelrad

Backstory: I was at the San Francisco MoMA experimenting with double-exposures of an art work and a passerby. I shot with the Hipstamatic app engaging the double-exposure lever using the LeAllan lens and Love 81 film. First I photographed the Rauschenberg painting and then the man passing by. I used Lightbrush to define and emphasize certain areas of the photo and then SuperimposeX to combine the 2 versions. The final step was in iColorama making subtle changes to bring out the colors.. 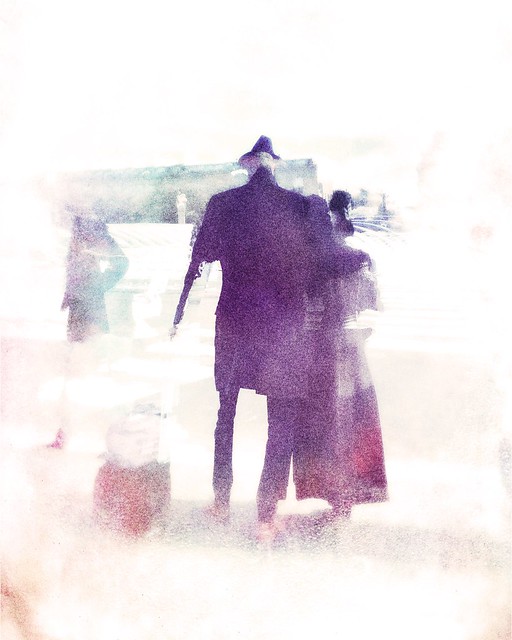 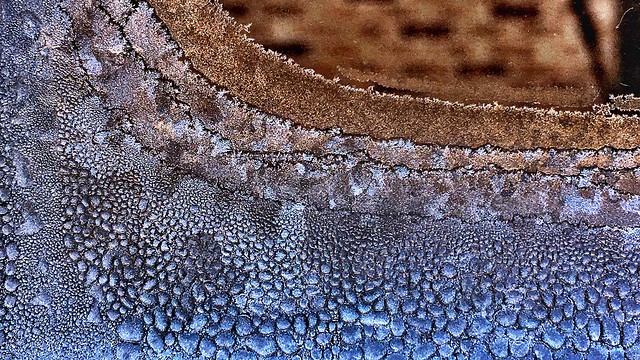 Layers of frost by Dragon Fly

App used: Shot was taken with iP6s using Camera+ 2 app, then retouched with Snapseed.
Backstory: Inspiration? We were in the midst of a brutal polar vortex and I noticed there was frost on my windows. I went from window to window to find the right look, and settled on the window off my kitchen. It faced north. 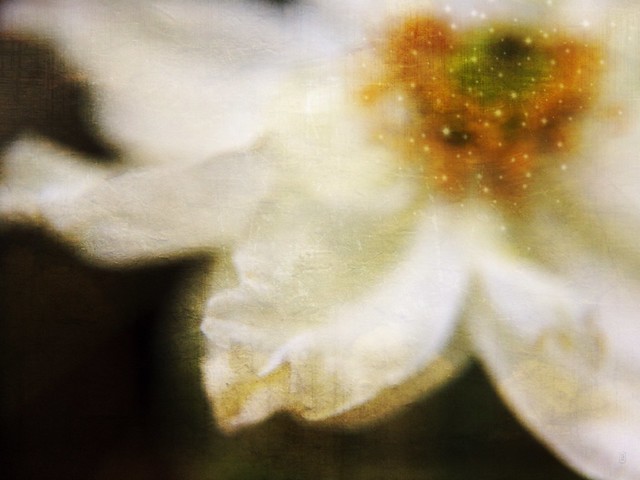 eye of the beholder by oola cristina
App used: Apps Used: Snapseed, TouchRetouch, Procreate, Distressed FX
Backstory: I had been in a bit of a slump both physically and creatively, but was feeling restless to create something. I often go back to flowers during these times, mostly macro… a photo with a filter or two.

The photo is a macro shot of a Japanese anemone, the center of which was decomposing late in the season. I wanted this image to be more abstract or surreal than representational. I first used Snapseed to add smoothness, glow and blur. ThenTouchRetouch to remove a few small darkened areas on the petals that were distracting. Procreate next to add the stars. Then Distressed FX for the final filter, which added a nice amount of texture and blurred the image further.

To me, this image is about what we see when we look at something… what we take in about it. There’s the surface layer of, in this case, “this is a flower”. But what is a flower? What is the essence of a flower? And what else might it be?

In Japanese Shinto Buddhism, there is a concept called “kami” that includes the belief that anything in the natural world that inspires awe and an awareness of beauty, the ethereal, transcendent or ephemeral has a spirit present in it. Every culture that has existed in close relationship with the earth not only has regarded it with respect and even reverence, but has some kind of lore about the spirits that live in nature, often giving story and meaning to everything from animals to rock formations to waterfalls to flowers. Even in today’s world of cities, technology and busy-ness, a flower is given and received with feelings and meaning. As I started to place the stars into this piece, I thought of how everything in creation is made of the same elements… using Carl Sagan’s words, “star stuff”. So, upon closer inspection — perhaps with different eyes — the center of a flower might contain a kind of galaxy… connected with us but also something magical and uplifting to the heart and spirit 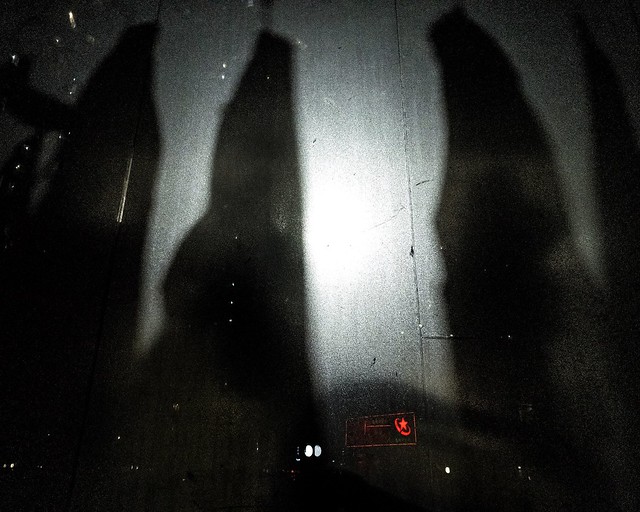 The image was made outside a clothe cleaning shop at night. The robes and coats being hung to dry casted their shadows onto the glass window to appear as people in cloaks having a secret meeting.

The raw file was developed in Lightroom Mobile and then processed in Snapseed for various local dodging and burning, and slight de-saturation except the red reflections. 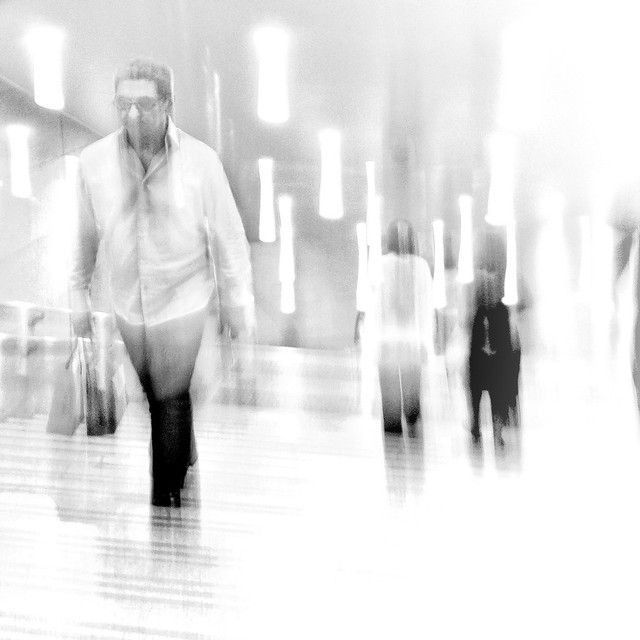 Don’t let it show by Paul Yan
Apps used: Phone: iPhone X
Camera app: ProCamera
Post-processing app: Snapseed
Backstory: “Even if you feel you’ve got nothing to hide
Keep it inside of you
Don’t give in
Don’t tell them anything…
Don’t let it show”

This image was made in an underpass tunnel with the shutter speed of the ProCamera app set to 1/25 second. After pre-focus-locking on the ground 1.5 meters in front of me, I wiggled the phone vertically while firing off the shutter to get the blur effect. The RAW file was developed in Lightroom Mobile. Local dodging-and-burning on various parts along with cropping and monochroming was done in Snapseed. 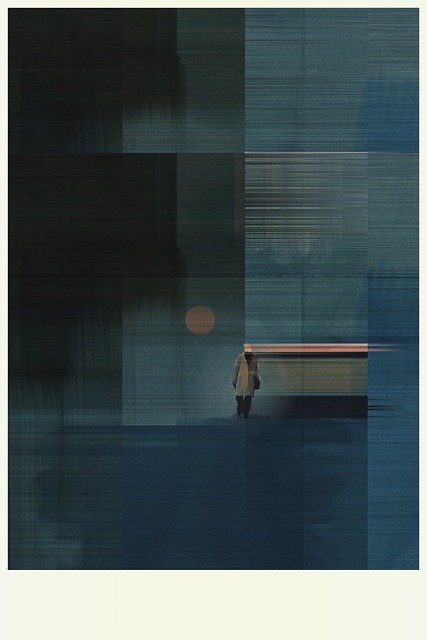 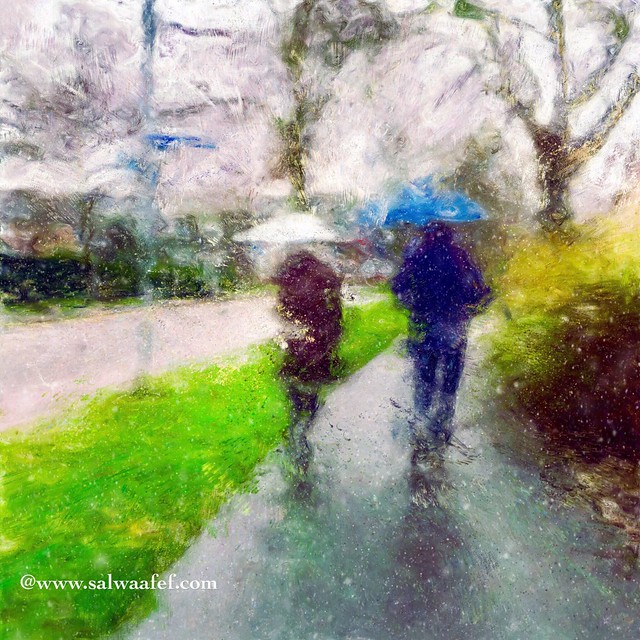 Backstory: This photo about a rainy and windy day in my neighborhood. Using “slow shutter cam ” ” light trail ” gives me the basic painterly effect. Then I work on iColoram for more painterly effects like styles, effect …etc.
In this photo, I wanted to bring out the mood of a windy rainy day, kind of messy mood, so I’ve used also some brushes to make some mess more obvious!
I ended with tons of painterly photos, trying to blend some of them together to get the mood and the impression which I kept in my head from that windy rainy day.

Backstory: This shot was taken with my IPhone6s on a street in Ferrara, Italy, while on vacation there last fall. I was very interested in the architecture but I happened to see this woman starting to walk toward the doorway to this gallery entrance. I was fortunate to catch her movement just as she was beginning to come across the doorway but still against the white frame of the door which outlined her perfectly. As I digitally painted it I noticed the beautiful contrasts of mellow yellows against the electric blues of her coat and the subtle cool tones on the windows. I emphasized those contrasts.  I also noticed the repetition of the horizontals and vertical shapes and I cropped to play up the symmetry of the windows and doorway. Then I also noticed the blue lettering on the gallery sign which again echoed the blue in her jacket. It came together like a well orchestrated symphony, everything falling into place. I could not have planned it better.
Apps used were

Running to the Sea by Keith Midson

Apps used: I used Hipstamatic app on my iPhone 7 Plus.

Backstory: There were some very serious bushfires in Tasmania a few weeks ago.  The smoke in the city made the air quality the worst in recorded history.  So when I went to the shops to buy some groceries I saw this scene as I was walking back to my car and captured it – the smoke haze added something to it.  Even though it’s in suburbia, it has an almost ‘desert’ feel to it.  It was a pretty spontaneous moment.

Backstory: I am taking a Still Life Photography course and our assignment was to take a photo shooting down. I have a few odd pieces of silverware that was probably my grandmother’s and I thought they might make an interesting composition. The actual photo right out of the iPhone XS Max was pretty good but I still brought it into Snapseed for some additional adjustments.