Shake, rattle and roll showcases some images that display some of these characteristics, those artists who love to shake things up a bit and roll their own way when it comes to processing, but if it’s not your cup of tea, don’t let that rattle you, there’s a few gorgeous photos with minimal editing thrown in for good measure. Thank you to Ray Harrop for his uneasy shaking image “Speeding past the church” which gets our top spot in this week’s Apps Uncovered. 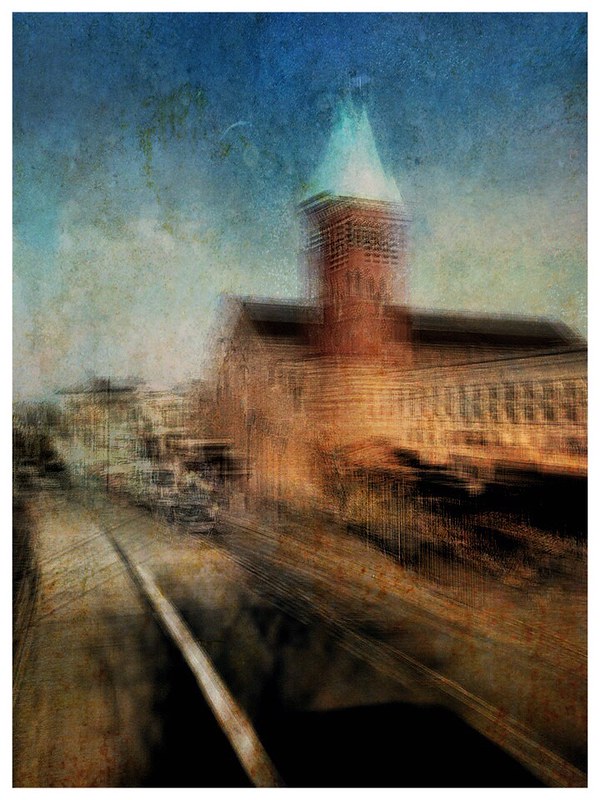 Speeding past the Church by Ray Harrop
Apps used: My photograph Speeding past the Church was created using Slow Shutter Cam,Distressed FX+ and Snapseed.  Backstory: I made the image from the top deck of a bus, this is a favourite place of mine, for this type of photography, I like the high camera angle! As the bus is moving the Slow Shutter app on my iPhone 7 Plus gives the blurred effect I’m looking for. Using Distressed FX+ I obtained the final result. The image just needed a few tweaks and a frame in Snapseed to complete the photograph. 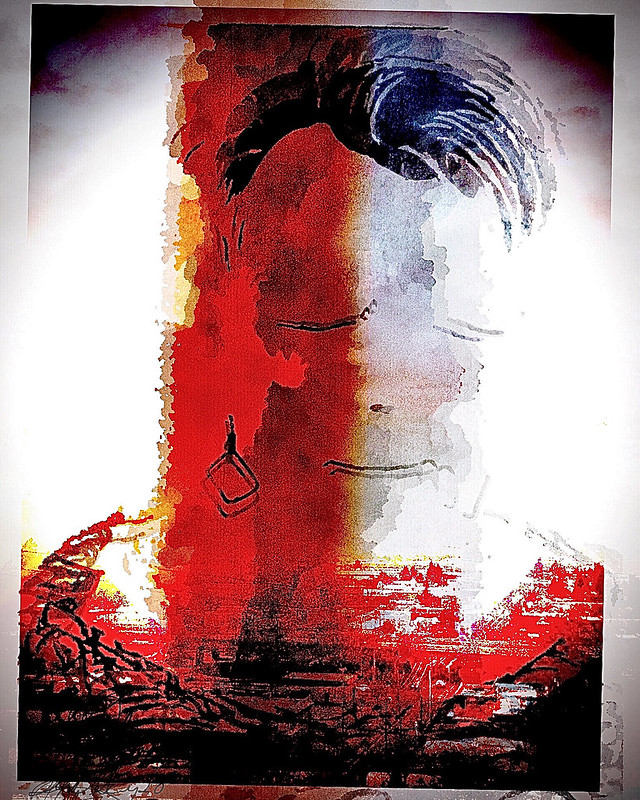 Portrait of a Woman: Fear Can Confuse by FlickrSusan2011 (Susan Detroy)
Apps used: I used several apps, starting with Blackie which is a favorite app I use for self portrait work with all its black and white film choices. Popsicolor is a new one for me. I like its sparseness. Image Blender I use regularly as much of the work in the series is blended. Finally iColorama is an app I am just starting to delve into. This app I am learning, using a class I purchased last year Backstory: How I happened to compose this image. – Lately I have felt fearful for personal and political reasons. I have had serious health issues and I am frightened by the behavior of unscrupulous and megalomanic politicians. After I completed creating this blend for the “Portrait of a Woman” image I could sense the feelings I was experiencing were evident. So I called her “Fear Can Confuse.” 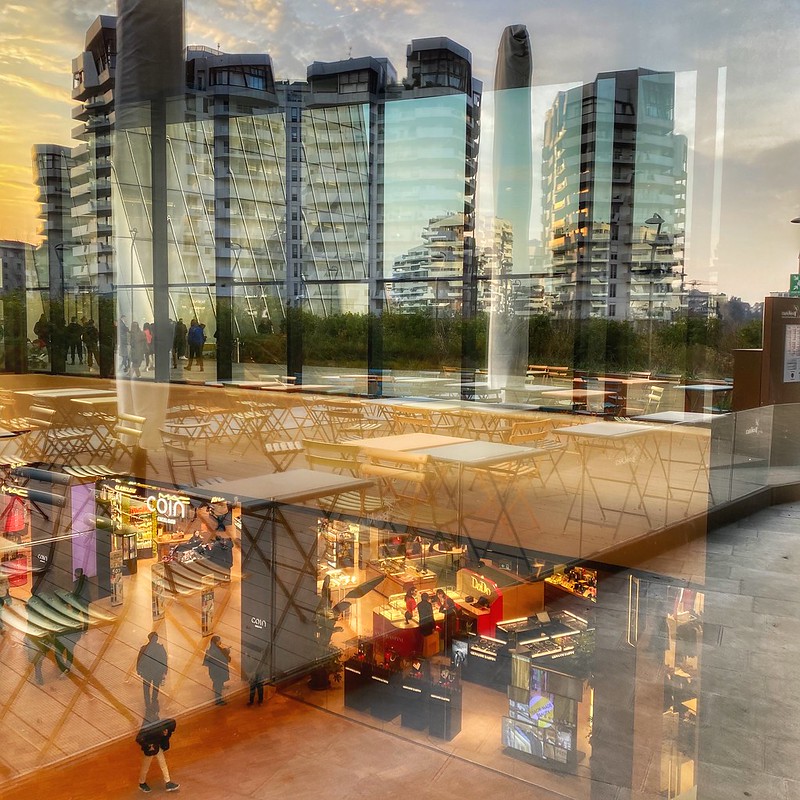 Apps used: I shot with the default camera app on an iPhone 11pro max and edited with Snapseed.
Backstory: The CityLife complex in Milan is always a source of inspiration. I was walking through it with both iPhone and camera looking for new photos and I stumbled into this glass wall, through which you could see the underground floor of the shopping mall, but also the reflection of the bar tables and some buildings, and even other buildings through the back glass. It makes a crowded photo, but it does provide layers of reading. The moment seemed to be perfect. 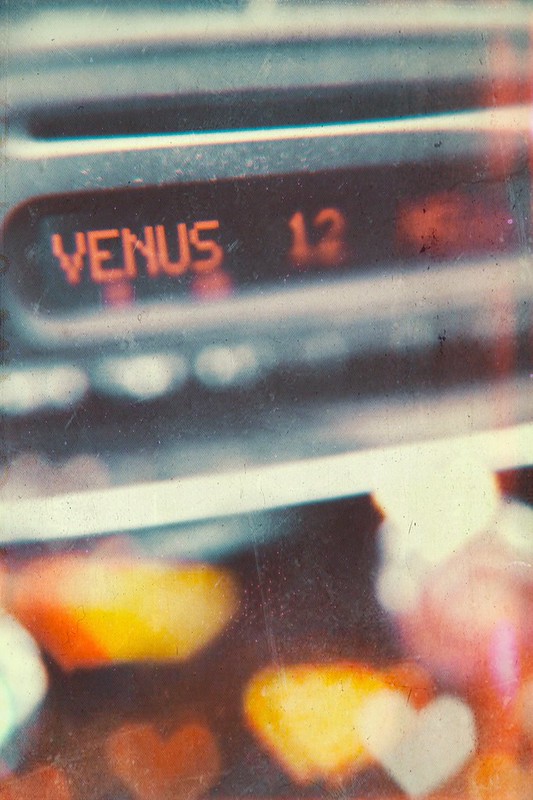 At your desire by Susan Blasé
Apps used: Tadaa, 1967 app and Afterlight.

Backstory: This photo was taken in my little Fiat and I thought was appropriate for Valentine’s Day. I just blurred out most in Tadaa and majority of editing was done using 1967 app. It’s great for adding textures and light leaks etc., and a dash with Afterlight too. My valentine and I have a connection over Venus so it was a sort of wink to him. I hope you all had a lovely day with your beloved ones. 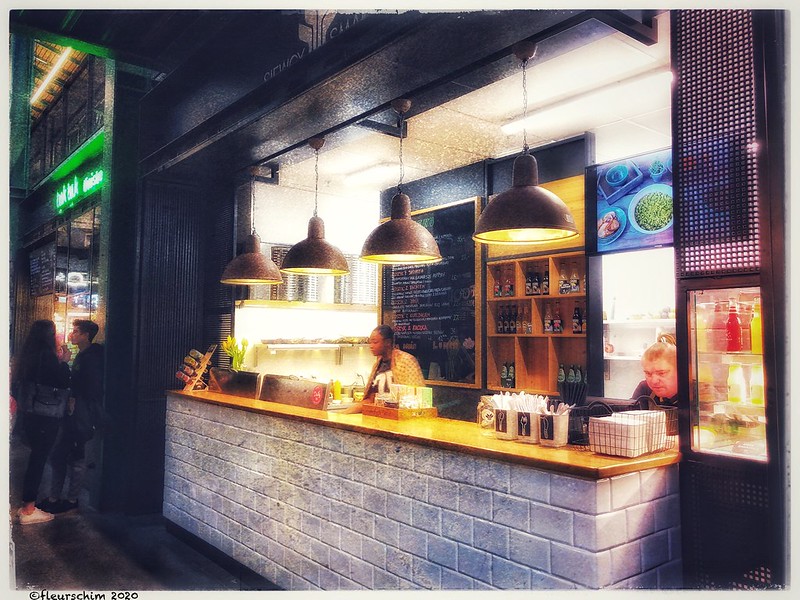 Backstory: Later in the evening, after dinner in Warsaw, we were walking back to our hotel. There was still some night life. This scene caught my eye: Two involved restaurant personnel, doing their own thing, and an involved couple sharing an ice cream cone, and an intimate moment.

There was very cool lighting, with associated colors which enhanced the ambiance. I captured the scene with my iphone11pro. Later, I edited on my iPad Pro in Snapseed. Further editing in DistressedFX , with tone and textures, helped create a very moody tableau. 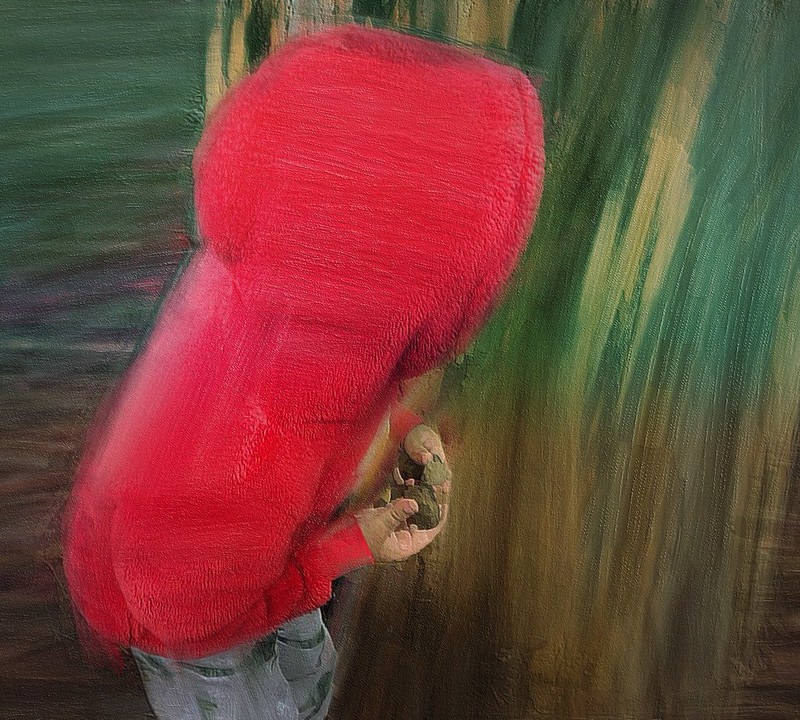 Rock Collector by Kathy Clay
Apps used: Apps used: Snapseed, IColorama, MetaBrush
Backstory: The image was created from one of the many photos I take of my 4 year old grandson on our nature hikes around San Diego. 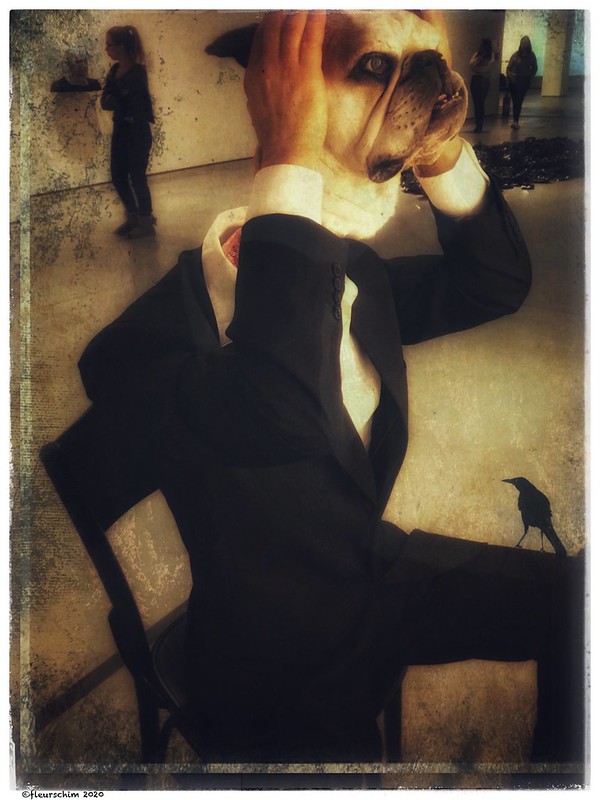 Apps used: Snapseed, DistressedFX and iColorama.
Backstory: The stage for this image was the contemporary art museum in Krakow. There were quite a few avant-garde installations to be viewed as we wandered from room to room.

I am always grateful when I am allowed to photograph in a museum or gallery. I like both observing and capturing the scenes as they unravel around various exhibits.

This particular exhibit was grotesque, as it portrayed an individual sitting on a chair seemingly positioning a boxer dog’s head on its neck. Or, maybe taking it off?
This shocking piece created a perfect antidote to the more tame images on the walls, or inexplicable floor displays throughout the museum.

Later, I tuned the image in Snapseed. DistressedFX has so many wonderful filters that I enjoy experimenting until I am done! The raven, or the watcher, is a recurring creature that creates a fixed point of view. He basically appeared in my image. iColorama offers wonderful textures, tones and forms that are so fun to employ. 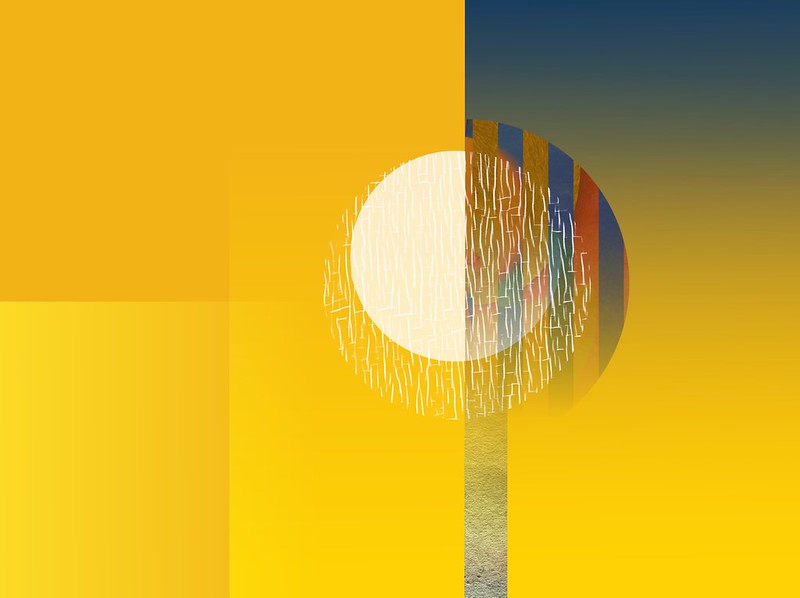 Backstory: If memory is anamnesis, bubbling and flowing out of times and things we easily recall, “rememory” is more arduous…like suddenly finding a hole in the dam that had shut some memories away painfully just out of reach, blurred shadows once vibrant and colorful that we think we should know but now are not quite familiar, forgotten notions in a box on some dusty back shelf of our experience.

In real time I am watching dementia reduce my father’s 94 years to little more than momentary glimpses of a time near high school in a town where the people have no faces that he knows only as Somewhere. This esteemed professor, this lifetime student of history seems to not know his own beyond short scripts that are like handrails as he navigates the stairs to Somewhere that looks increasingly like nowhere in particular.

The work Rememory was created during a recent visit with him where his mind may have struggled to remember my name but his large heart granted assurance. It is deliberately bright and colorful, a moment I want to remember, a moment of recognition that the affliction he now bears may one day be mine to carry, and that I want each piece of art I create to serve as my own handrails for one day when I may need them. I love you, Dad. Apps used: I used an iPhone 11 and just the Hipstamatic app set on randomize.  Backstory: Every morning when I get to work I walk from my office to the cafeteria to get some coffee and then go over to the window to check out the sunrise. Last week I noticed some flowers by a different window and thought if I lined them up with the sunrise they might look like they were outside in the snow. A photo not likely in New Hampshire in February. 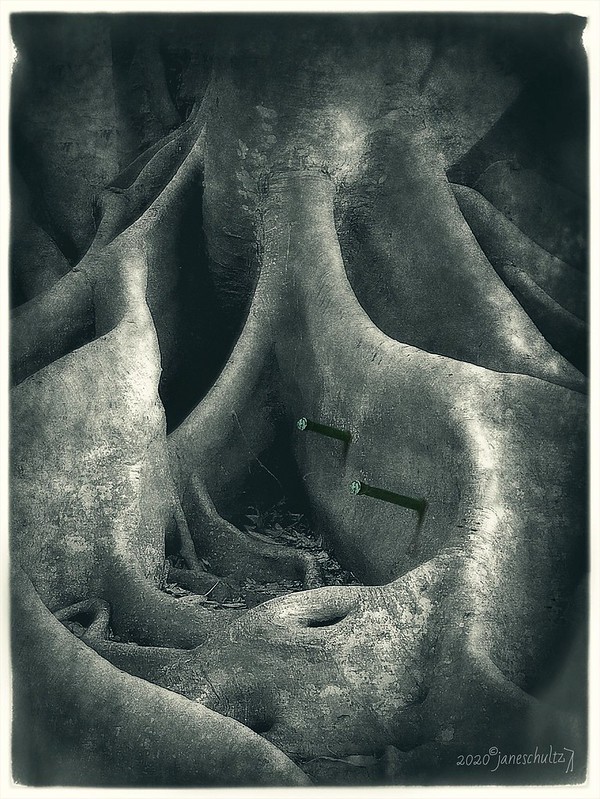 Apps used: iPhone XS native cam, Perfect B&W and Laminar.
Backstory: A continuing series that exposes the enormity of nature and the deep emotions that flow from and through it. It is ladened with the destructive yet permanence of the hardware, as it pours out with love, sweat, loss and it’s own nature. 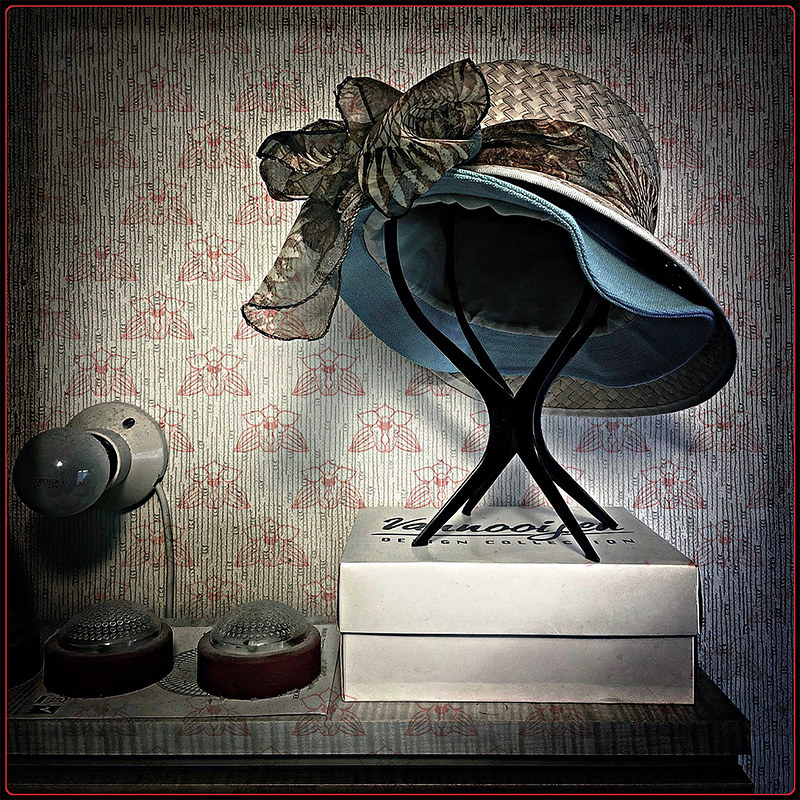 Backstory: Actually it started because I was curious what my new iPhone11 could do.
The hat is an old sunhat from my grandmother, we couldn’t throw it away.
It’s on top of a cupboard collecting dust.

The lighting is daylight and the light of a desk lamp.
Basically, it’s dead simple without any fuss.
It’s square cut, vignetted, desaturated and sharpened in Lightroom.
In iColorama I used a brush mask to paint the vintage texture (31/233).
The red square framework was made in Pixelmator.

My work comes most from an iPad Pro (12.9inch) with the iPhone11 (former 6s) as the basic picture. Most of the time something is added, moved or manipulated in my work.
The so called final processing is likely done in the evening at the sofa.

My straightforward photos so to speak are a different kind of sports.
There I use a Ricoh G3 camera as well an iPhone11. 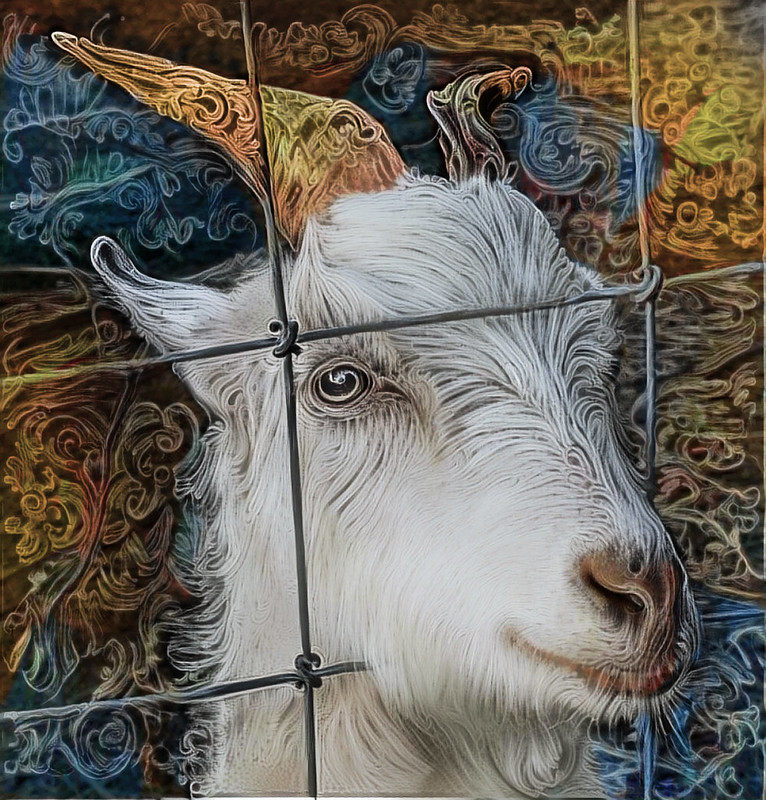 Backstory: Saw this sweet fella who saw me too, and poked his nose through the fence to greet me.
I shot this with my iPhone X and started, as I always do, by opening the image in Snapseed.
I darkened (burned around the edges of the goat to help him PoP off the background, and accentuated and sharpened his fur.

After making color and luminosity adjustments in Snapseed I tried a few filters in the Dreamscope app. In this case I found a filter that was very graphic and linear, amd I thought this would help bring out the strands of fur, but as is usually the case some of the image looked good and other parts do not look good at all.
I opened that filtered version in Snapseed or Photoshop Fix and healed or cloned away areas that did not contribute to the image such as a few areas of the background curlycues to simplify that filtered image to use as an overlay.

Now . . . I try again in iColorama combining the two images. I spent time with the masking tools within iColorama, hiding certain areas partially or completely while allowing other areas of the filter to be emphasized. I then altered the color of the background with soft colors without affecting the shapes to help separate the goat from it’s background. 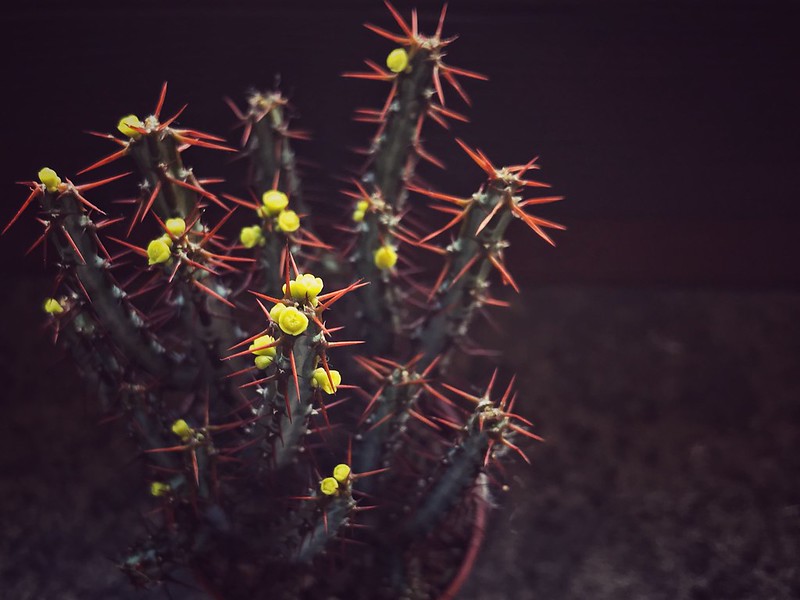 Backstory: It was such a joy finding that my plants were in bloom.
I waited for two years for a single flower so, when I found out those little green gems the only thing i thought was “I have to take a picture!”.