This week’s theme that shook out from the images posted over the last two weeks (hence a larger-than-usual harvest) has to do with geometry, played out in subjects, compositional choices, light-and-dark and conceptual frameworks (even the word suggests geometry).

This week’s lead artwork, by iPhoneography Central regular Andrew Lucchesi, is an eye catching and thought provoking composite of disparate elements, the soft shapes of clouds, interspersed with the hard lines of the stairs and shadow from the cable railing. The mind struggles to figure out what’s going on – whether this is a natural phenonmenon or man-made. 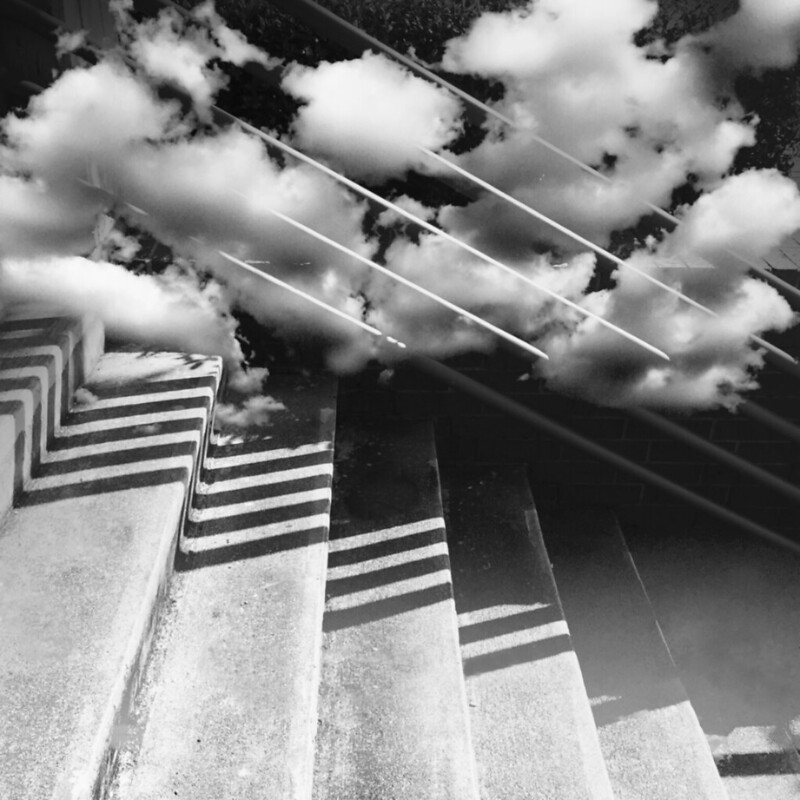 Stairway to Heaven by Andrew Lucchesi

Apps used and backstory: Sometimes I feel the creative impulse, but I have no new photos on my camera roll to work with. When this happens, I use a trick that my friend Meri Walker taught me–I use the Diana app to randomly select and combine two images from my camera roll. This is a great way to jump-start creativity, and it can suggest photo combinations that I would not otherwise have considered. That was the case with the image “Stairway to Heaven.”

In this image, Diana combined a photo of a staircase that I had taken using the Contrast by Hornbeck app, and a photo of clouds taken with the native iPhone camera app. The two images fit together pretty well. The clouds seem to be flowing down the stairs.

There were a few places where the clouds did not superimpose over the stairs well, and it broke the illusion. So, I used the heal tool in Enlight and the clone tool in Filterstorm Neue to clean up those areas. 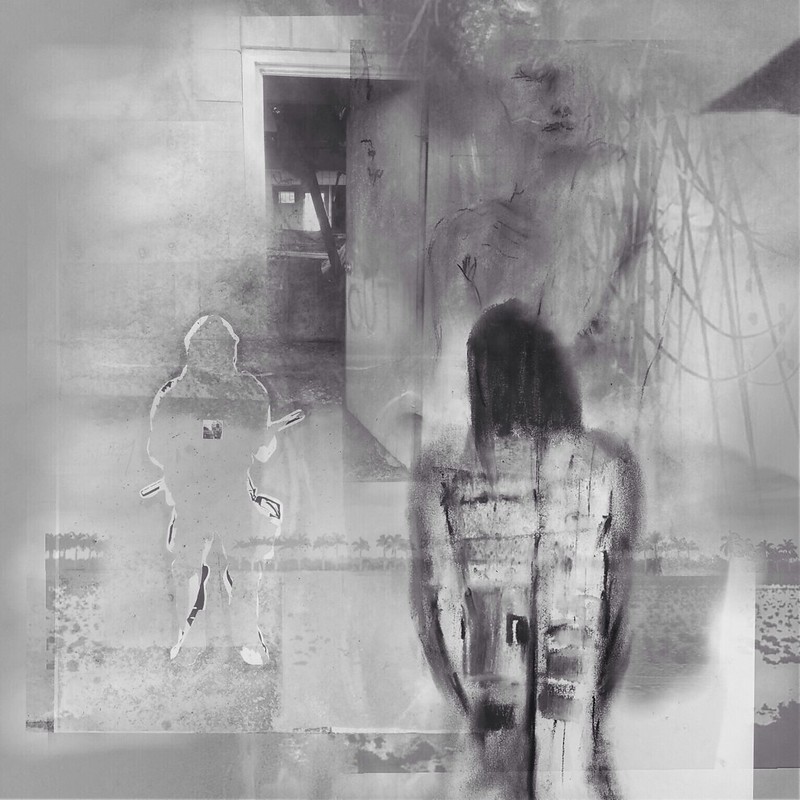 Apps used: superimpose, noir and squareready.
Backstory: When the precious gift of vulnerability is shared with another, often, conscious or not, the expectations fall below our desire.

” a heart twice removed” represents the struggle with lessons which provide a platform for deep introspection. Lessons that are an integral part in determining our choices. 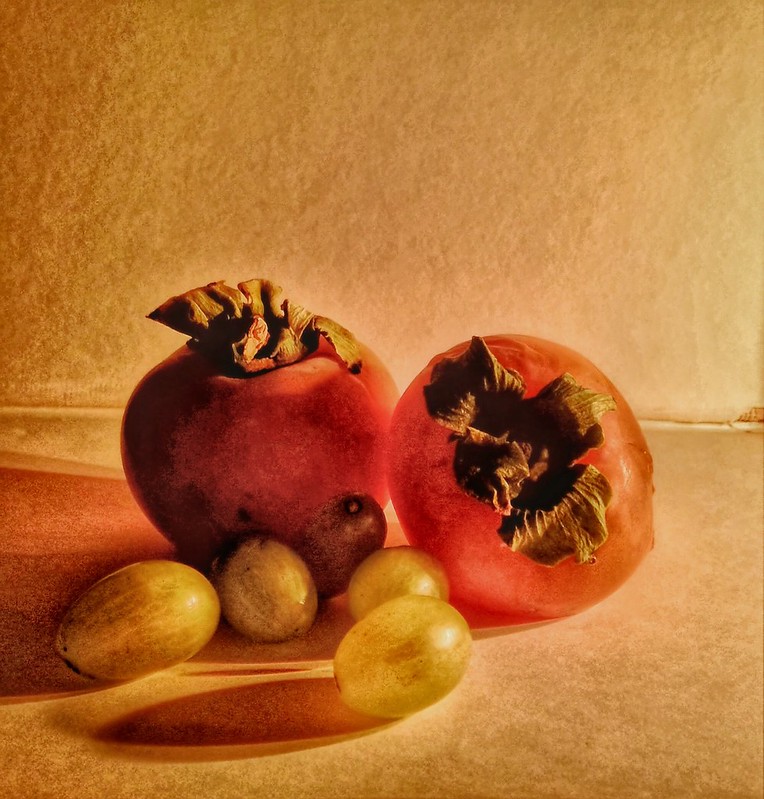 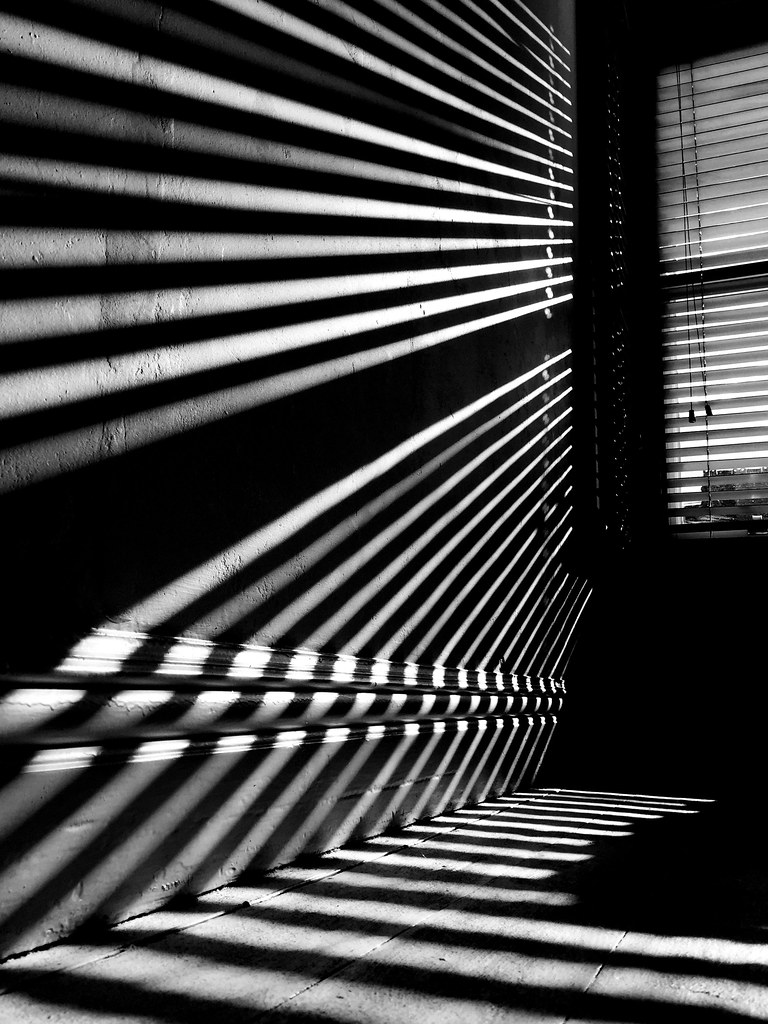 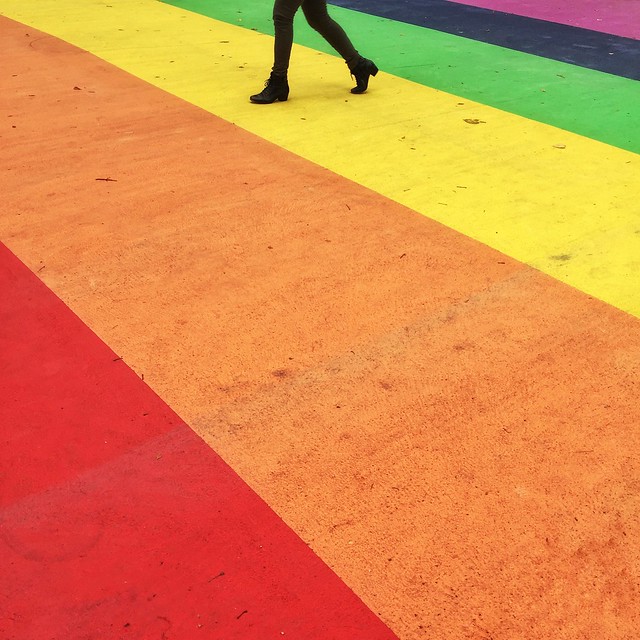 Where black is the color, where none is the number by Tomaso Belloni

App used: I shot with the iPhone6 default camera and only did some basic editing in Snapseed.

Backstory: With a street pavement like this one, in front of the city museum in Groningen, the Netherlands, one just needs to find a good angle and wait for the moment. I did have to wait quite a bit here, too many people and mostly on the wrong side of the road. Then the right legs appeared in the right spot. The title is a line from a recent Nobel laureate for literature who once predicted that a hard rain’s a-gonna fall. 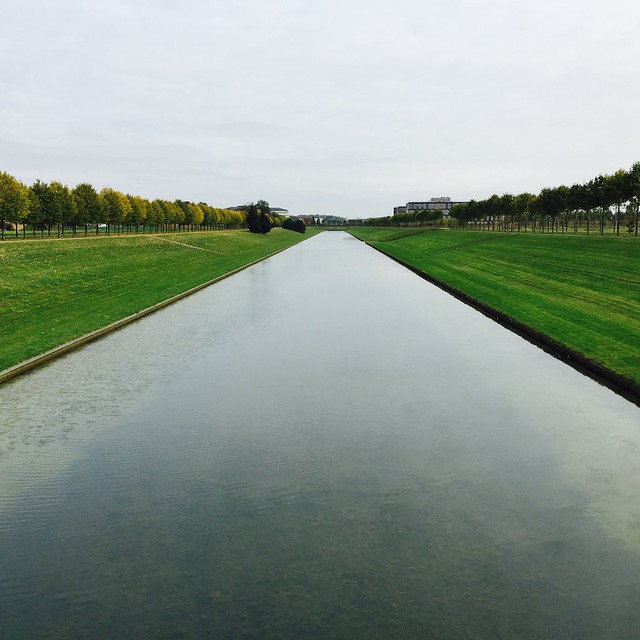 Taken with the iPhone’s 6 photo application

When I went during my lunch break the view I had was nice, luckily I had my iPhone to share this beautiful moment. 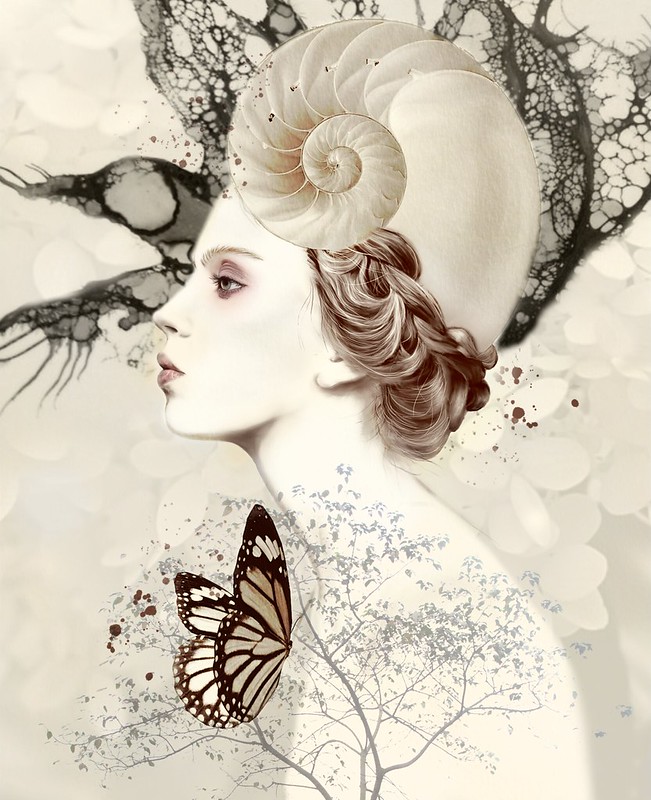 Apps used and backstory: My intent was to combine my Procreate drawing of the girl with various mobile photos that have meaning for me & elements to create a light etherial nature orientated composition. I have been experimenting with introducing more mobile drawing into my photo manipulations with this piece expanding on that idea. After drawing the Figure in ProCreate it was taken into IColorama to add parts of 4 different mobil photos. All was manipulated with a variety of blending modes & color changes. I used an Apple Pencil on an iPad Pro 12.9″. 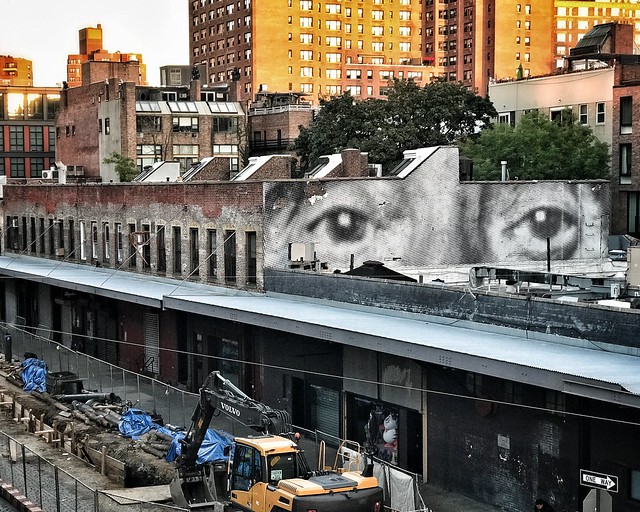 View from The High Line by Catherine Restivo

Backstory: I made this image while walking along the High Line in New York City. I noticed a lot of building and construction going on, and it made me reflect on how the city has changed so much since I moved here in 1987. A lot of the spirit and life has been wiped away, in my opinion. This image sort of exemplified all that – the watching eyes among the construction rubble. 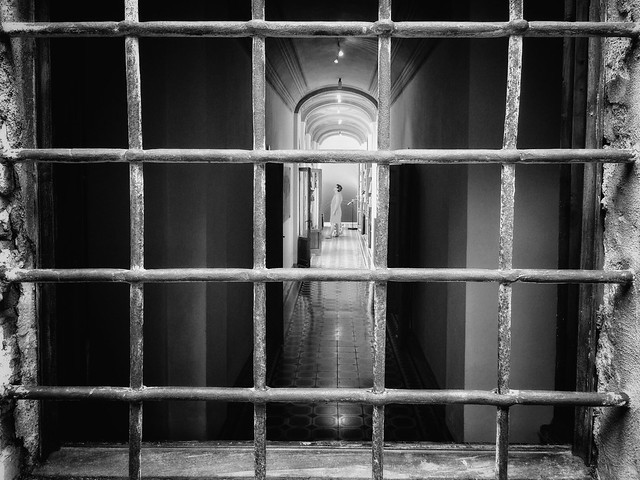 Backstory: I was walking with my family in San Gimignano and suddenly I was attracted by this scenery … it’s not a jail. The lady in the background was visiting a museum!I shot it with my iPhone 6 Plus and processed in Snapseed and Black App. 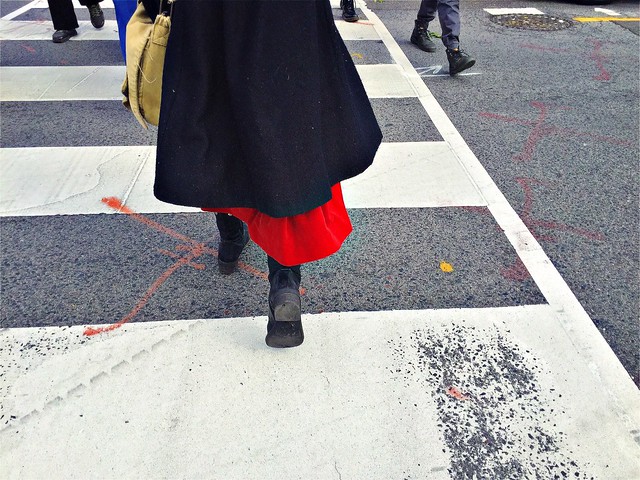 •a hint of red• by Julia Nathanson

App used and backstory: No elaborate back story, but the photo was shot and edited with Hipstamatic.

App use and backstory: When I saw this Hotel with the white and black squares I decided to wait till someone will be passing. Processed with Snapseed. 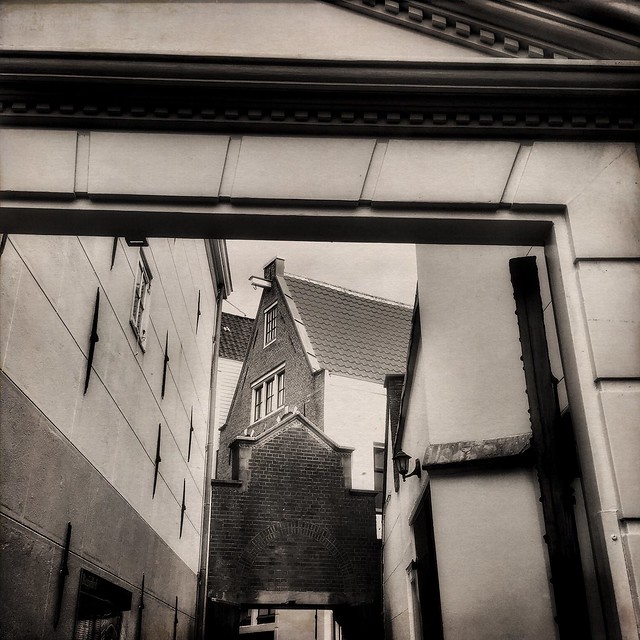 Apps used and backstory: I have been at the Begijnhof in Amsterdam countless times, but this was the first time I noticed this exit. One just needs to find the right angle and the lines all go into place.
I shot with the iPhone6 default camera and edited first in Snapseed for basic editing, then in Hipstamatic (Akira lens, Uchitel 20 film).

Apps used: I used only Hipstamatic Oggl: Lucas lens, Robusta Film. I believe no other post processing was performed. Shot on an iPhone 5.

Backstory: This image was taken by a lake near my house. Although it was cold, it was a softly lit, golden November morning and the fallen leaves coated the landscape with russet, brown and yellow. This made it feel warmer than it really was. A fishing boat had been overturned to prepare for Winter. The leafy debris seemed to form an encroaching blanket, trying its best to cover the boat, the grounds and even the lake. I composed the image to show the main elements of this mood of Fall: the boat hull, the layering leaves and the reflection of Autumn trees in the lake. Taken together, these pictorial elements had, for me, the air of relics; of almost animated objects, left on their own and having their last presence and warming attentions before they would be buried in ice and snow. 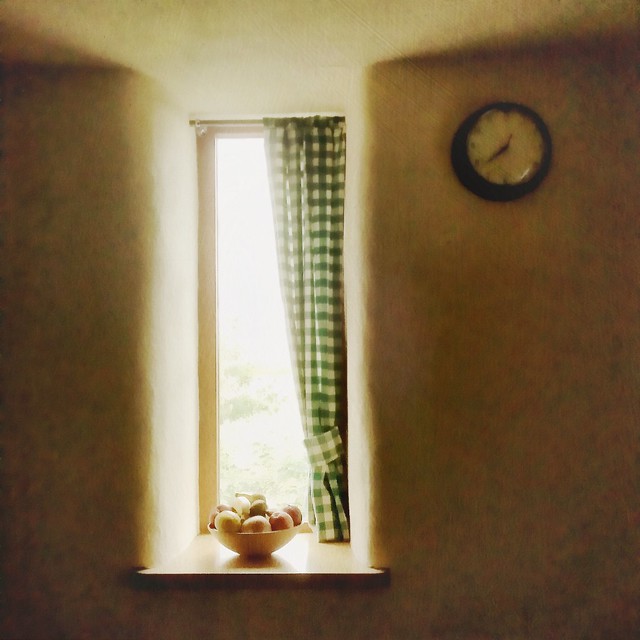 Backstory: The Strawbale Cottage at Howden, Yorkshire is, as the name suggests, built with straw bales and the walls are very thick and deep. In the morning, the light through the kitchen window, with its simple green gingham curtain and the natural finish of the walls matched the wonderful, gentle, calming atmosphere of the whole place. 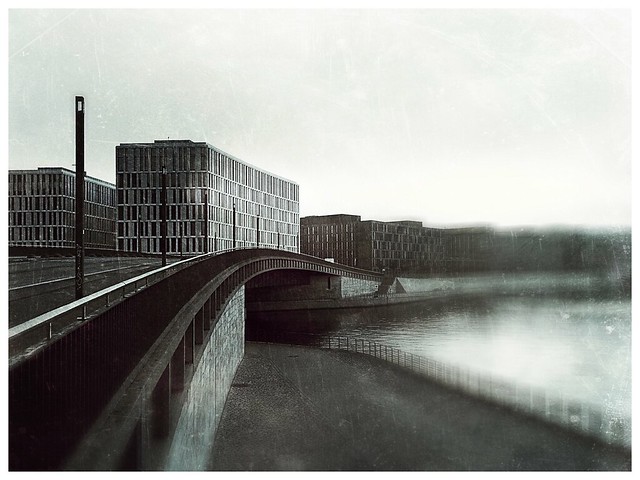 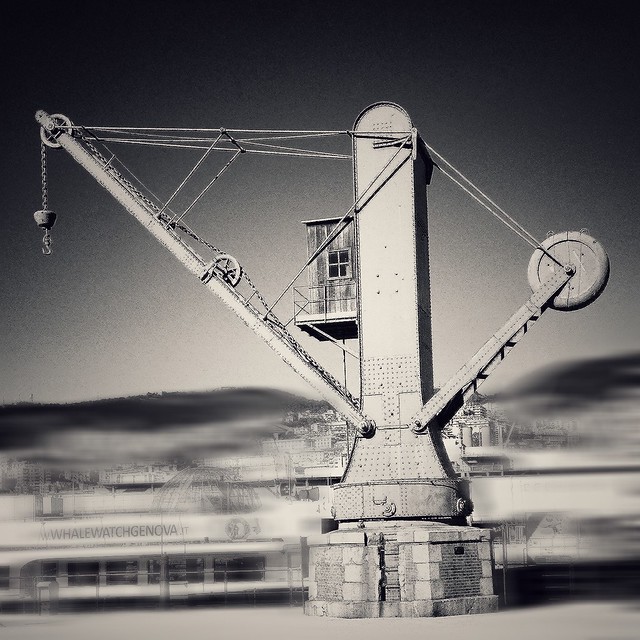 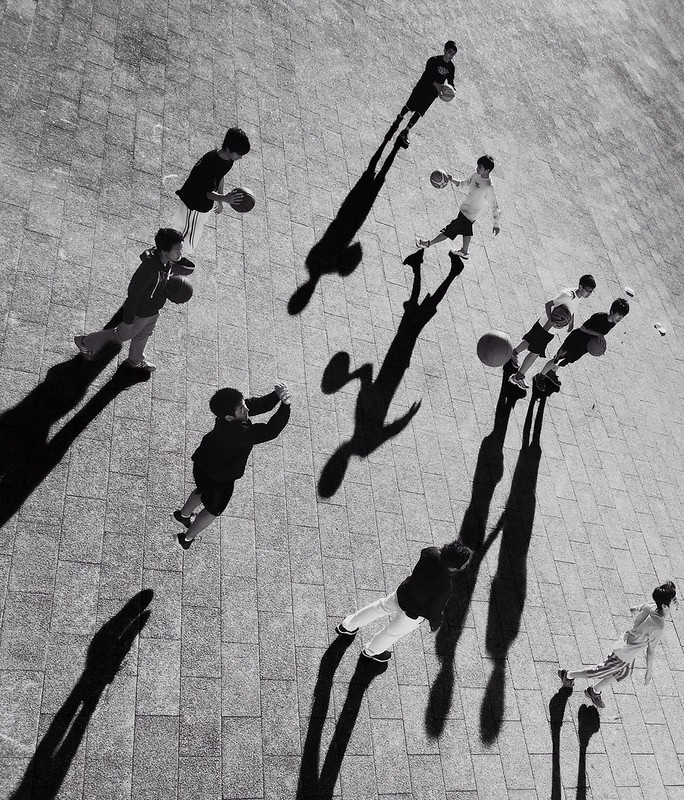 Backstory: This was shot in a park in Tokyo. Usually if you go there on a sunny afternoon at the weekend there’s a bunch of teenagers playing basketball. Fortunately this park has high wall overlooking the court so it’s perfect for taking pictures. Then it was just a matter of getting the right frame. I then made some edits in Snapseed to the contrast. 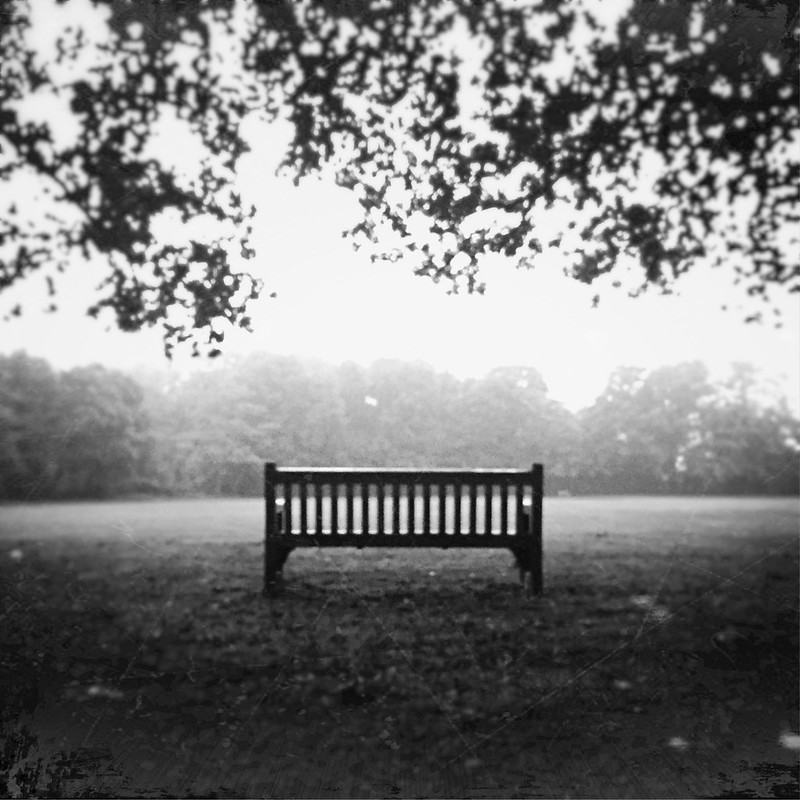 Apps used and backstory: The image was taken early in the morning as I took my dog for a walk. I was in a contemplative mood as it was so quiet and peaceful at that time. I find benches like this strangely interesting, you can just sit and watch the world go by, think about life and often (as is the case here) they are dedicated to someone who has since passed but perhaps tread the same path you are on.

The image was taken with the Blackie B&W camera app which I’ve been using a lot recently. I like the B&W treatment that it has but also it has some manual controls and I deliberately de-focussed the original shot to get the dappled light through the leaves of the tree and to add a mood to the shot. I then tweaked the contrast and cropped in Snapseed and applied a final texture using PictureShow (an old favourite app of mine). 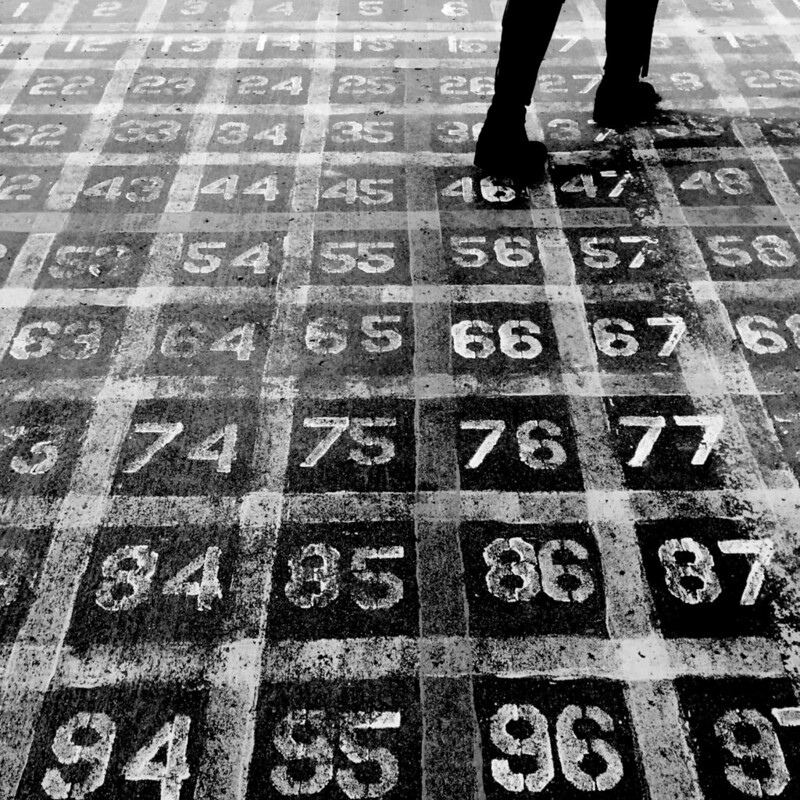 By Numbers by Andrew Lucchesi

Apps used: iPhone 6 Plus, Contrast By Hornbeck, Enlight, Filterstorm Neue
Backstory: I took this photo at a playground. The numbers 1 through 100 are painted on a grid on the basketball court to help kids learn numbers. I thought the grid might look good when shot using Contrast by Hornbeck. I took a few shots of the numbers, but the grid in itself wasn’t a very interesting subject. I waited till people walked by and took shots of them walking across the grid. Those shots were better but still weren’t what I was looking for. Then my wife showed up in a pair of cool black boots. I got some shots of her walking across the grid and the tall black boots made a nice contrast with the grid. I edited the image in Enlight using the Scarify black and white filter, which made the boots stand out a little more against the ground. 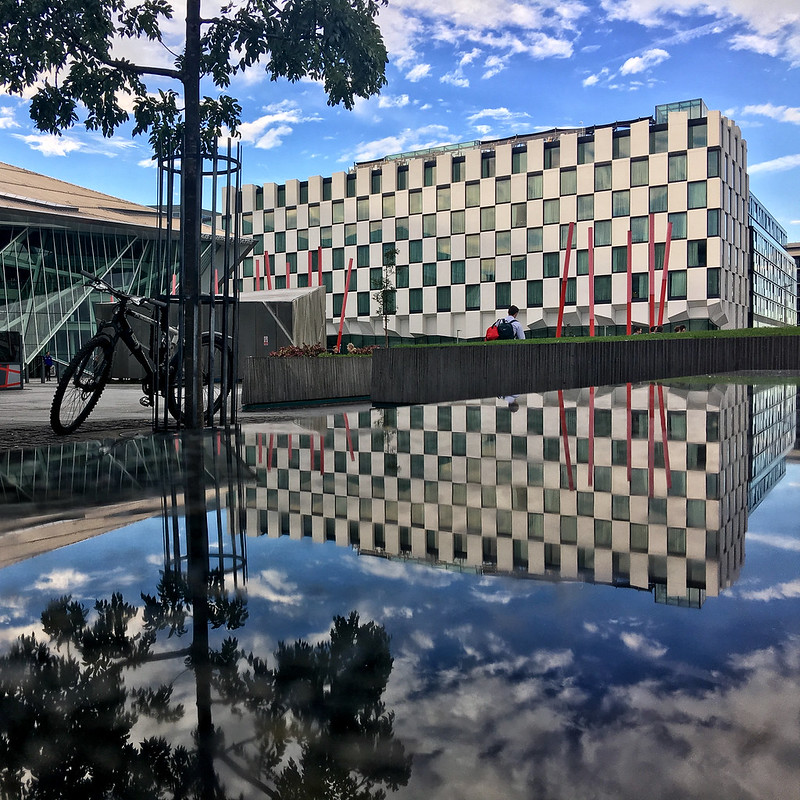 Apps used and backstory: Photo taken in Eastbourne, East Sussex with the native iPhone 7+ camera and edited in Procreate and Snapseed. 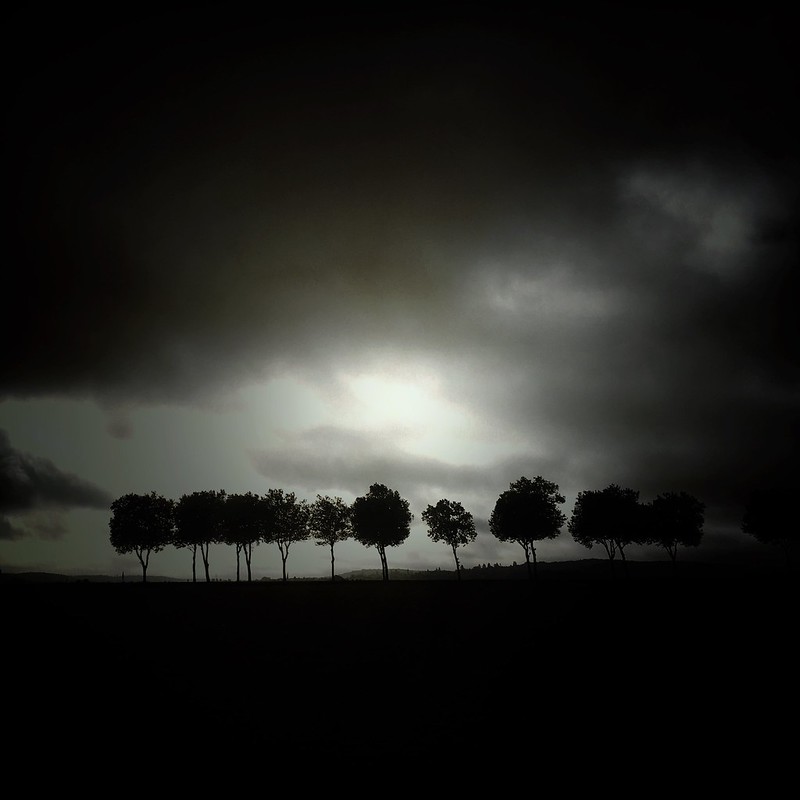