Programs used for this tutorial, there are two, True HDR for the shot of photography and Adobe Photoshop Touch (iPad only), to edit and give effects to the photo, I’ll try to make the whole process and the various steps as simple as possible, keep in mind that any filter applied requires a new level, I will try to list them step by step in several steps.
………………………………………………………………………………
What follows is the original image, of an old abandoned house on my Monferrato, and this photo was taken with True HDR keep in mind that I usually do not edit the image with the various sliders, I just save the image by using only the filter presets without touching anything, the filters that I use to save my image are, Retro and Retro2, then I’m going to choose one that gives me the best picture of departure.

ï¿¼Now we’ve opened the image with Adobe Photoshop Touch, duplicate the layer so we will always have the original image as a sample to always have a comparison between the various phases of our work, so we will have the possibility that if something does not go as we would like , we can always take a new phase with our starting image that you’ll never, in our duplicate layer go to edit it with the palette of the curves. 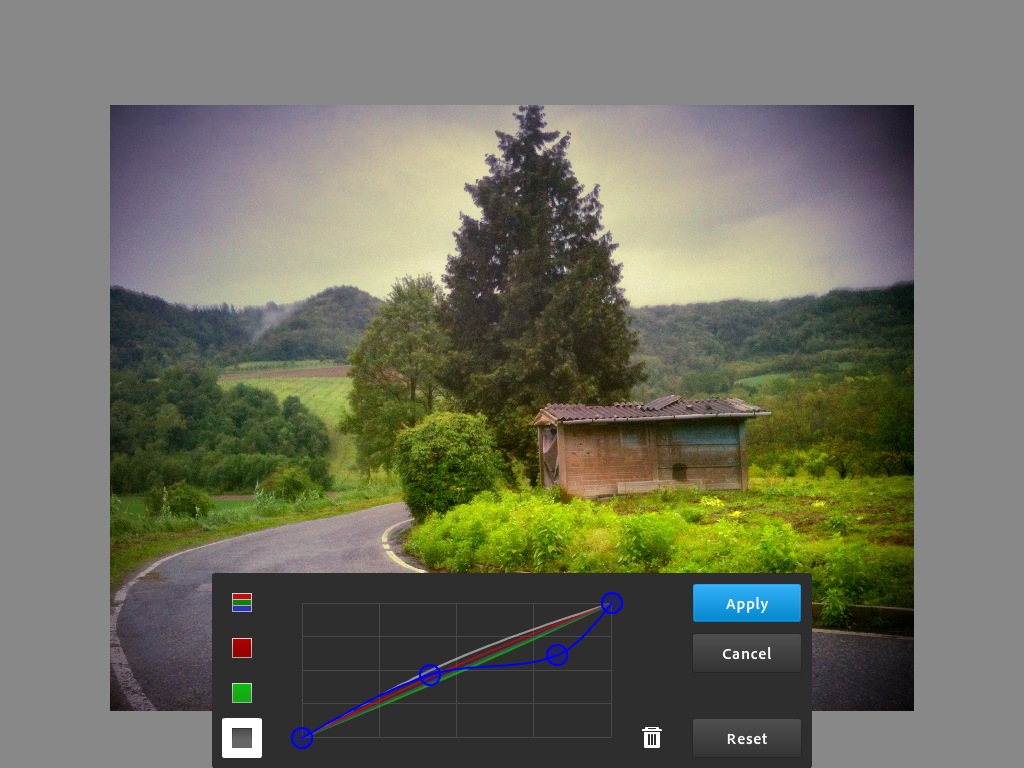 ï¿¼The photo above takes the passage of the curves is indicative only and according to the light of your image is up to you to edit them as much until you are satisfied of the imprint date, in this case we obtained an effect crossprocess and vignetting at the edges, which enhances the subject in the center, reviving colors. 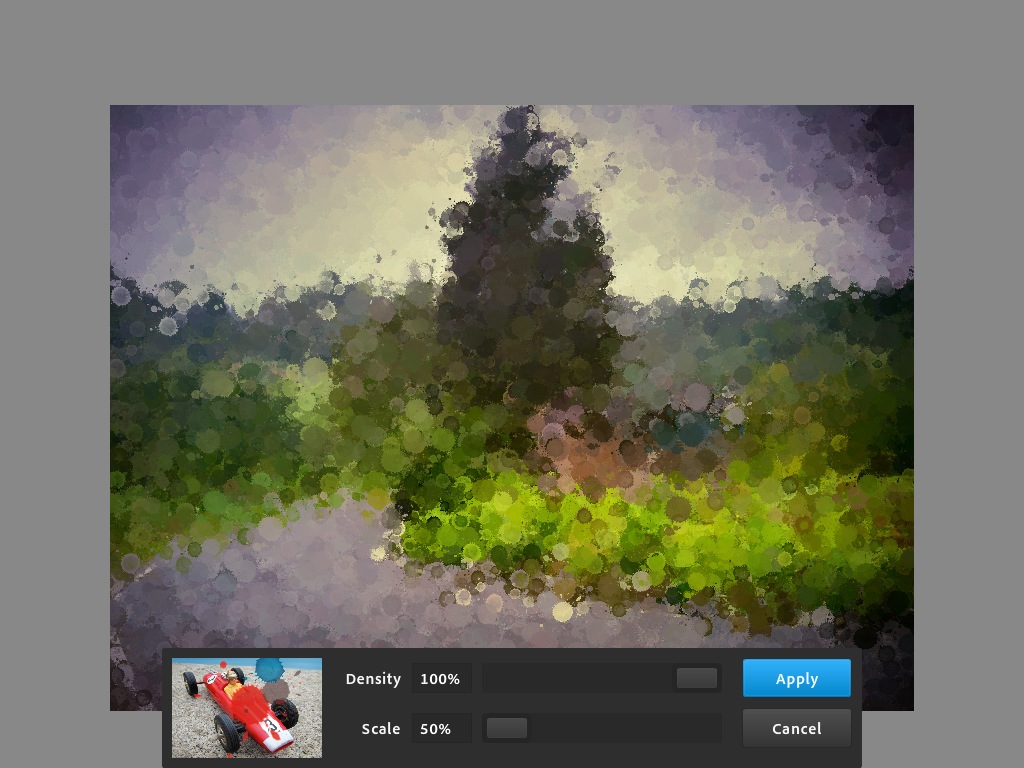 ï¿¼Now our image after applying the shift of the curves we are going to use the filter drops of color, giving the amount and the fusion of the layer as shown in the picture below.

ï¿¼At the moment so let’s leave this level, but let us duplicate the level that we got from curvee carry him on top of all others and at this level will give the effect of acrylic paint. 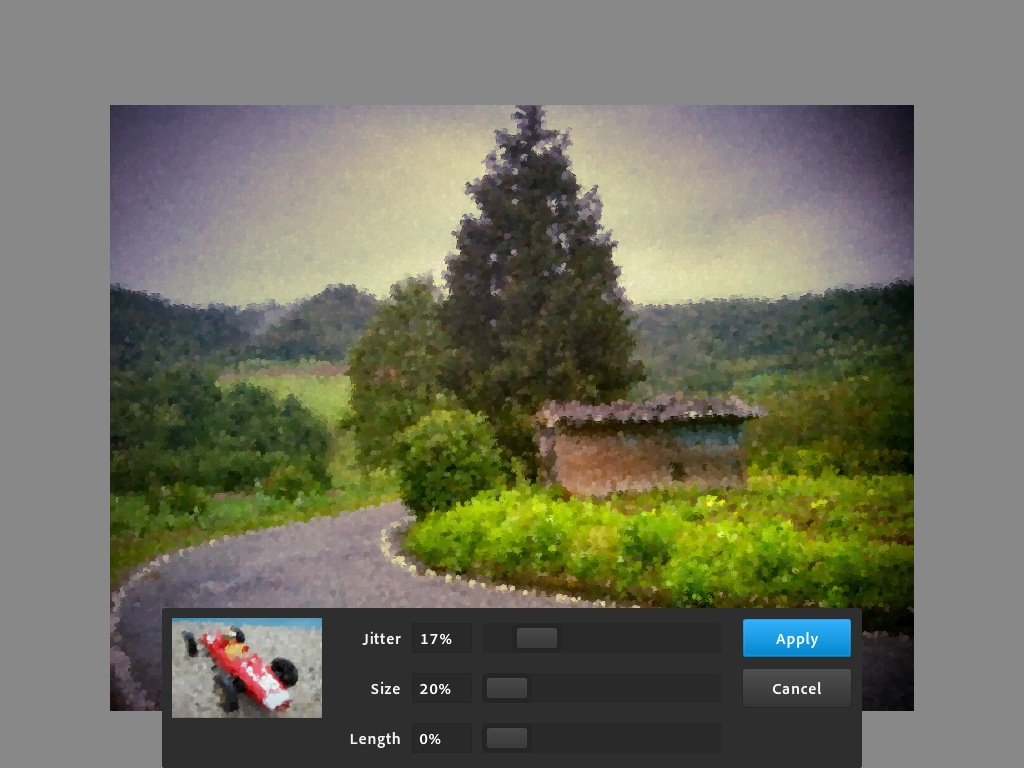 ï¿¼To this effect and level we give the quantity and fusion as the photograph below. 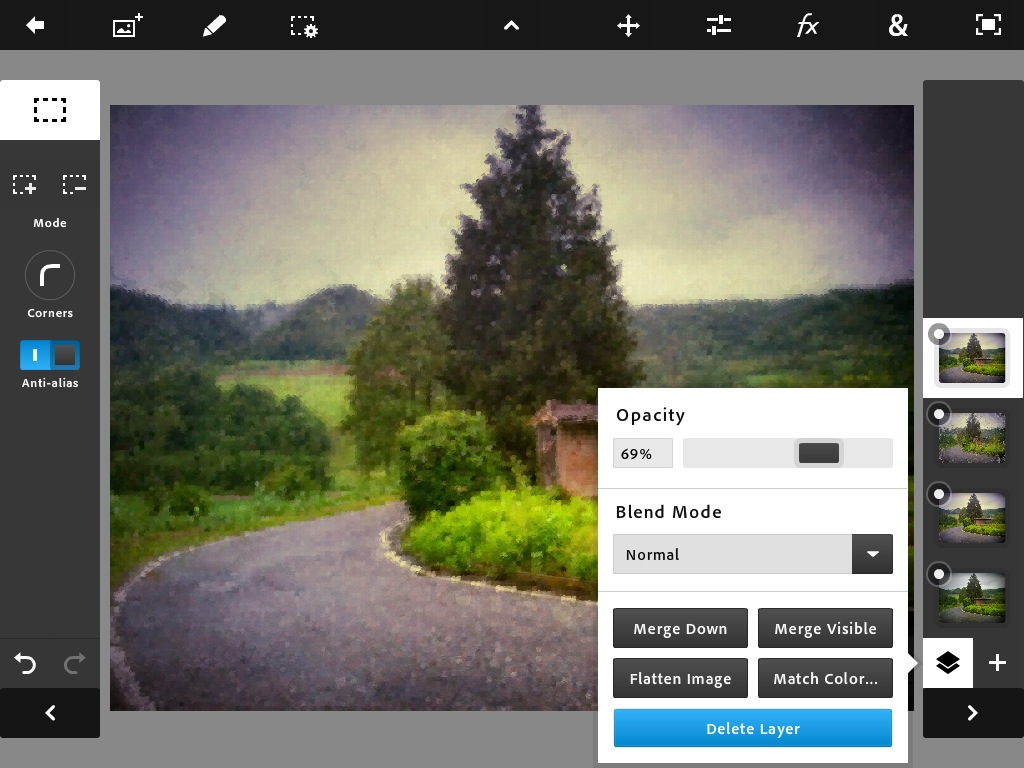 ï¿¼Now without touching the levels obtained with various filters, we go back to duplicate the layer we have obtained from the curves and without applying any type of filter carry him on top of all others, at this level we will work on the merger, that so we need to get a picture that leaves reveal the painting, but this is not too intrusive on image. 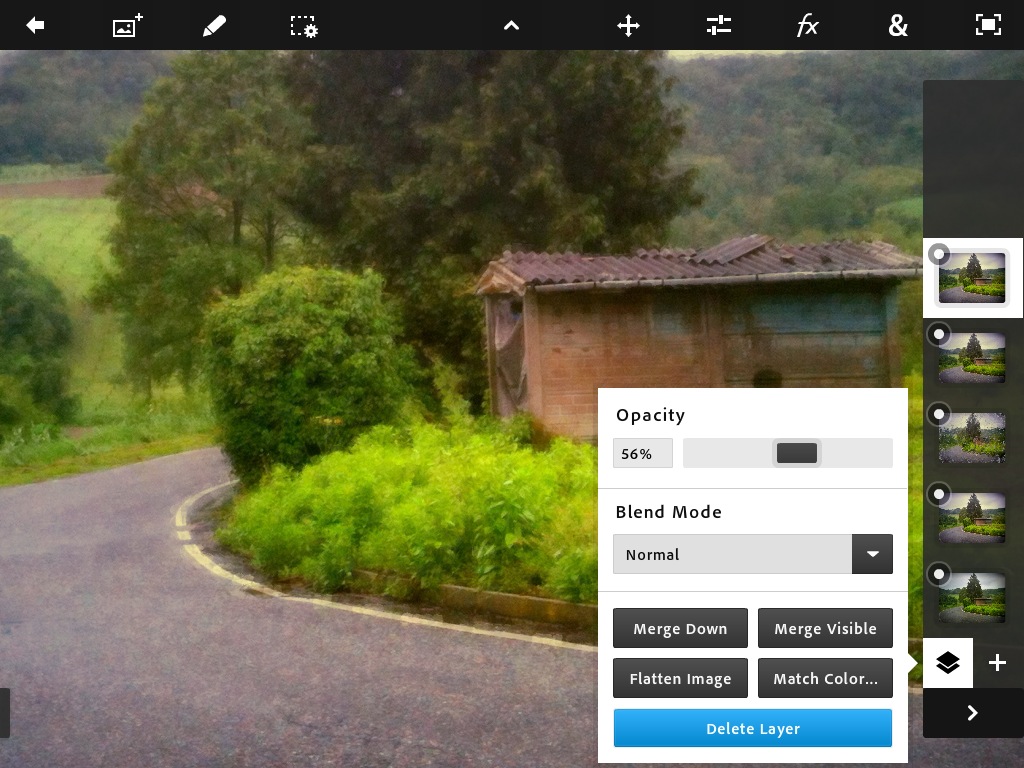 ï¿¼This is the result that we have obtained in particular.
Now we combine and merge all layers in a single layer and let’s duplicate it to give another effect called comics, at least that’s my updated version is called in Italian, but I think it is not difficult to find in artistic filters. 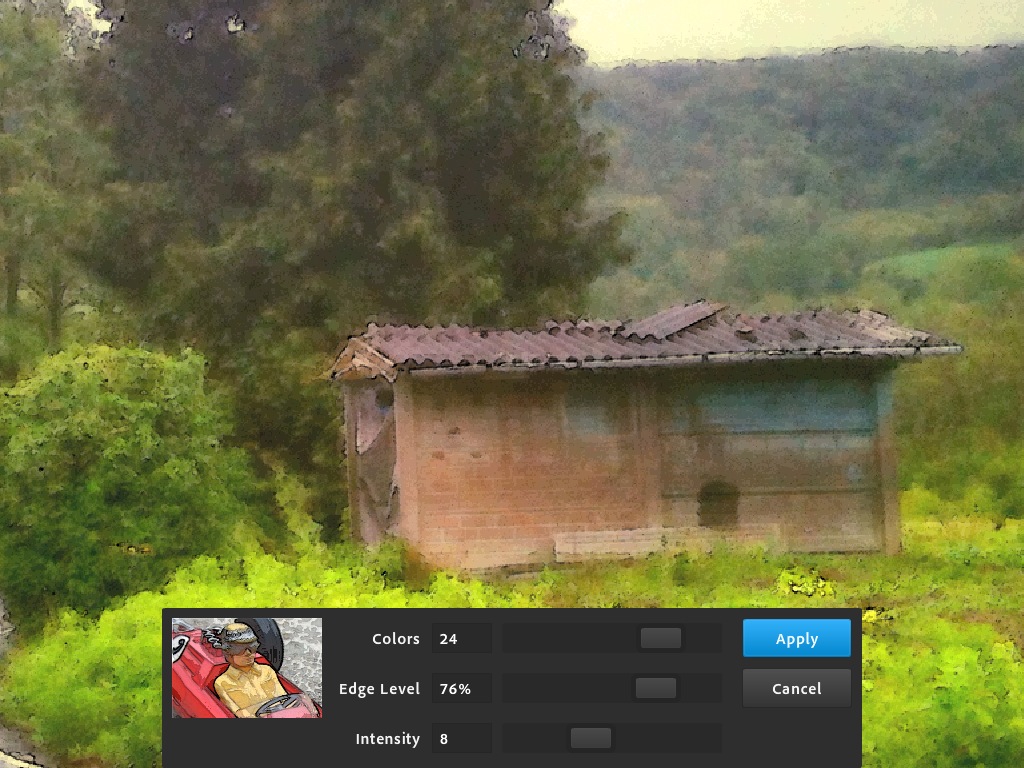 ï¿¼This in outline and the setting, this filter only serves to give a hatch effect to the entire image and also in this case need to adjust the fusion on the normal and lower the alcohol content of the fusion to obtain the desired result.
Another step is we’re done, join again in a single layer and duplicate the results, obtained with the level we’re going to give the effect of light and get the image below.

ï¿¼To this sum, let’s level the merger as evidenced by the picture below. 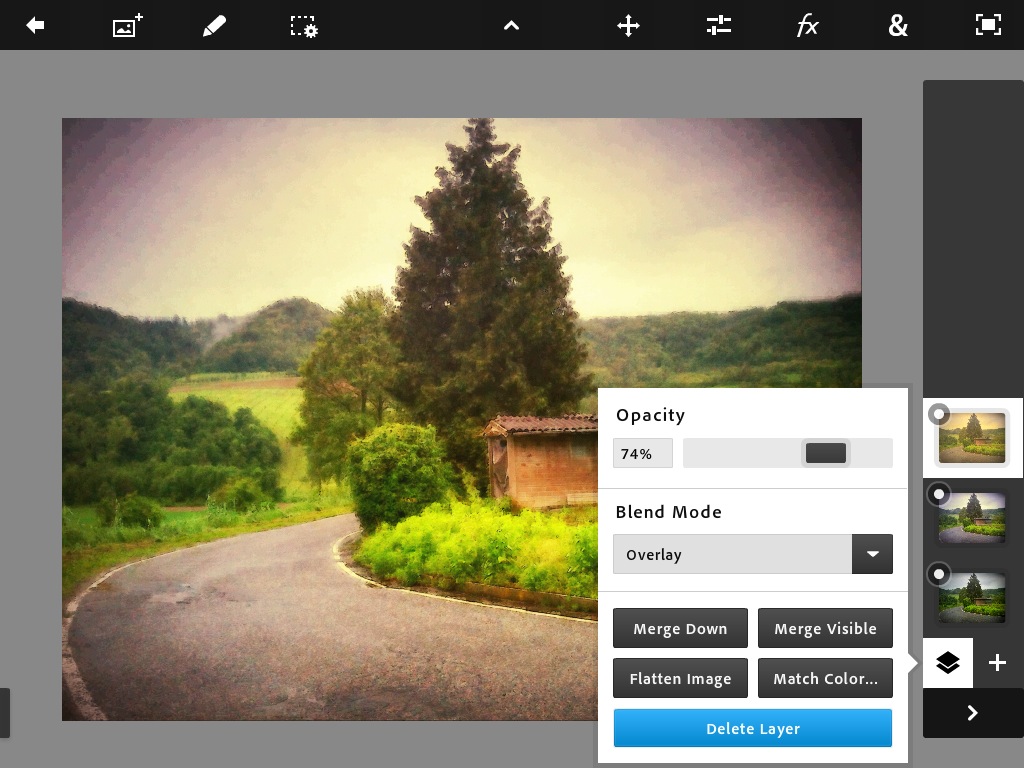 ï¿¼We combine it all, we make a small adjustment to contrast, light and this is the end result that we obtained. 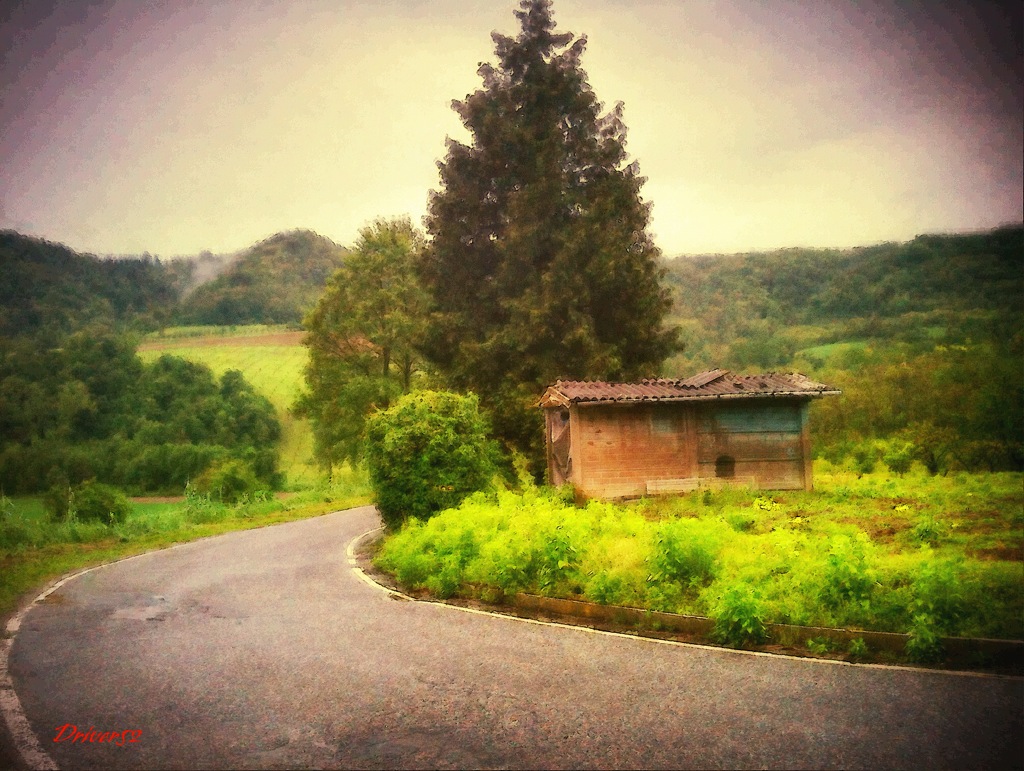 ï¿¼I hope this tutorial will serve to stimulate the artistic side that everyone has, like the passion for this art and photography that can be achieved with a tool called iPhone, and graphics programs that make it unique and versatile.
Thank you all for your attention and patience you had in my regard,
Driver.
Sharing
Tags Adobe Photoshope Touch, country, ipad painting, iphone painting, iphoneart, iphoneography, painterly, Painting, photograph to painting, rural scene, True HDR, water colour