Hello darkness…is the theme of this week’s Apps Uncovered which, as you’ll observe, quick-steps into light and colour towards the end of the gallery of iPhone images. Thank you to veteran Apps Uncovered contributor, David DeNagel who not only contributed our lead image this week with his sensitively edited frank portrait of his friend but also supplied me with this week’s theme title “Hello Darkness”; the two words from the Simon and Garfunkel song; The Sound of Silence both feature in the photograph. David’s portraits have been featured many times on Apps Uncovered. He also writes eloquently on his subjects and processes and this week is no exception – so I urge you to dive in and read David’s wonderful backstory whilst observing the photograph and check out his Flickr feed! Thank you David.

If you’d like a chance to be featured in this weekly showcase, please remember to include your apps and backstories with your photos. For a chance to feature, please join our Flickr group.

If you have any questions regarding this feature, please email Nicki at nicki@iPhoneographyCentral.com

App used: Focos; TouchRetouch;Snapseed; LineEngraver
Backstory: The photo constitutes a street portrait because, in my definition, it was taken on the street and not in a studio. It is an image of a dear friend of mine of many years. We got together recently, while he was visiting the local area.
We were both born in the same year and only lived blocks away from each other( in St.Louis). We attended the same grammar schools and had the same teachers. Basically, we spent the better part of our childhood together; I passed innumerable hours with him and his Greek family. Even in those early years, his interests were predominately scientific, while mine were artistic.
Then he moved away when I was about 12.
He went on to become a renowned physicist and the Head of the Department of Time Services at the United State’s Naval Observatory in 1997. He recently retired but said he would still be active as “ the father of time”(as he was termed by the media) in private industry.
His gaze and his striking shirt (inscribed with “Hello Darkness,” from the Simon and Garfunkel song, and a depiction of a “Black Hole” in deep space) embodies the scientific mind and intellectual humor of the man.
It was very good to see him again.

The image was taken in portrait mode on the iPhone XS Max. It was processed in Focos, in which a “black portrait” was created: the black background mask was generated within the Focos app by computational methods and is seldom perfect; so the mask then required careful refining using the clone tool in TouchRetouch. Then a monochrome conversion and tonal edits were performed in LineEngraver. Finally, burning and dodging and the application of portrait mode were carried out in Snapseed. 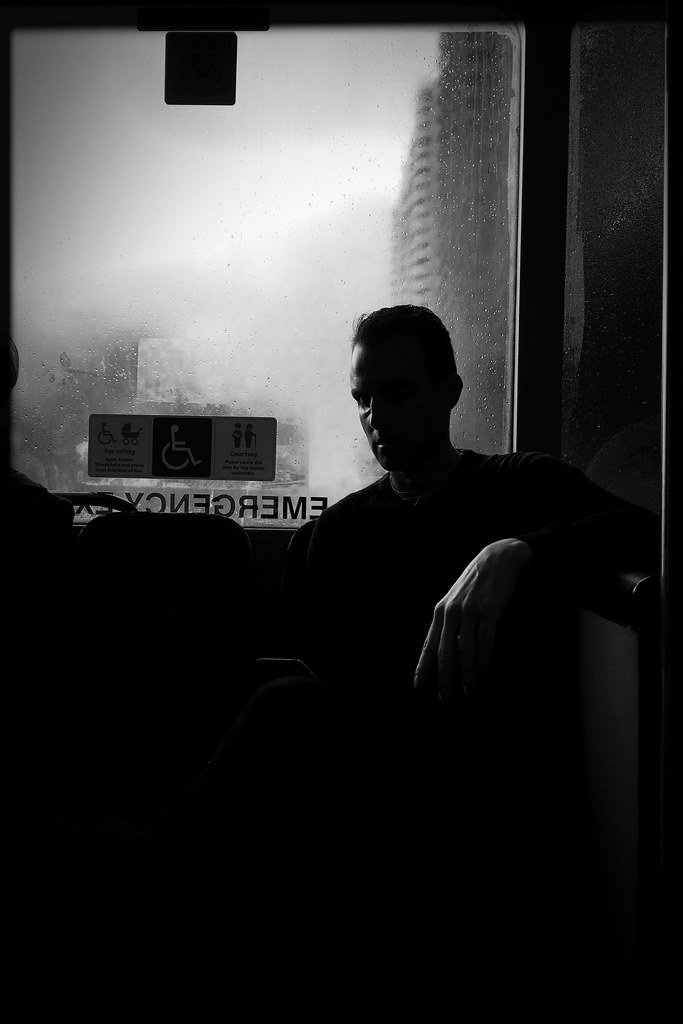 Rainy morning commutes by Albion Harrison-Nash.
Apps used: Apart from the pre-set Lowy lens and BlacKeys SuperGrain film, it is unedited. Shot with iPhone SE, using Hipstamatic app .
Backstory: Took this shot on my trip into work one rainy June morning last year. On Sydney buses there are a small bank of seats near the front that face each other. I rarely sit there as it is also for prams and wheel chairs etc. But this morning that’s where I found myself and as the bus moved out from between high buildings and onto the edge of Hyde Park, we got a bit of light coming in through the window on an otherwise very dark morning. I quickly opened my iphone SE, brought up the Hipstamatic app and took this shot.

onward and upward by Jeremy Cassell
App used: Mextures and Snapseed
Backstory: Traffic on the highway led to this shot. I don’t condone driving while photographing, but I do condone standstill traffic and photography. I took this into Snapseed, cropped the hell out of it and went to Mextures for the final product. 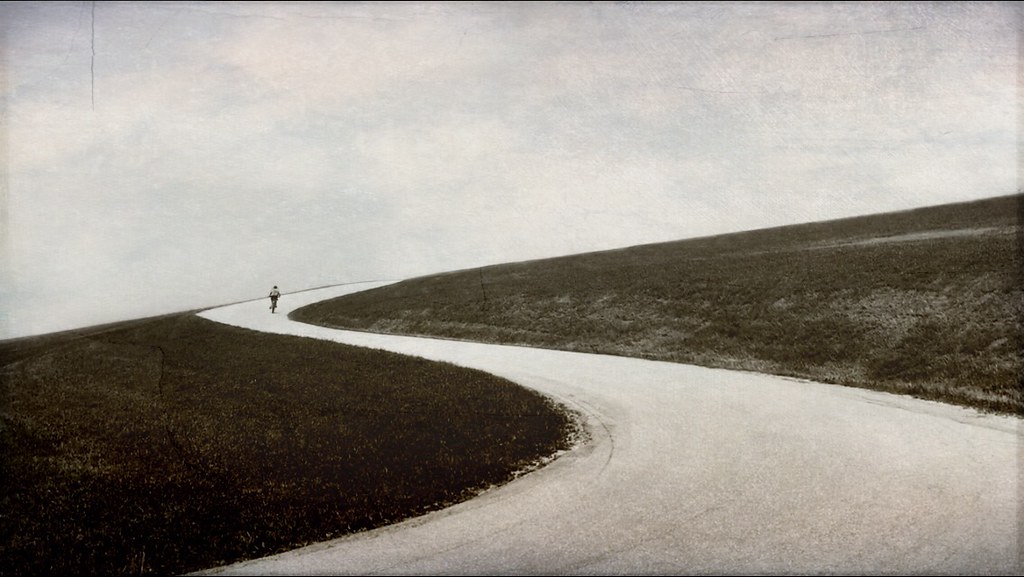 sometimes you don’t by Jeremy Cassell
App used: Snapseed, Decim8, Mextures
Backstory: Yet another shot of me in my bathroom mirror. Not much to say on this one! 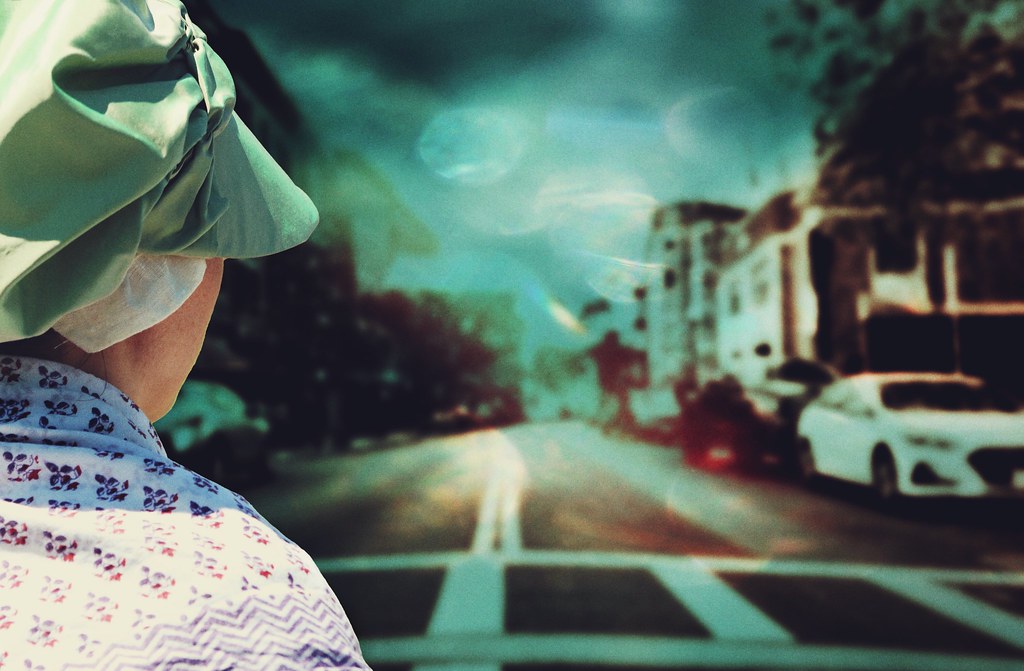 Hannah never did like this town, especially on Slider Sunday. by Robert Laliberte.

App used: Pixelmator, Distressed Fx, and Snapseed.
Backstory: This image was created for posting to the Flickr “Sliders Sunday” photo group. There are two general ideas that I had behind this: the first is that “Hannah” (living in the 18th century) is seeing this strange site (another dimension or time) while traveling about her town. The second has to do with imagining how one might portray our world (or dimension) from the perspective of a ghost (in this case, a young 18th century woman): if we imagine ghosts to be eerie and translucent, then perhaps they see themselves as solid and real, while it is our dimension and time that are ethereal.

Down to the waterline by Fleur Schim
App used: IphonexS cameraplus2 Snapseed distressedfx icolorama imageblender
Backstory: The ocean is a special space. When I go down to the beach, I feel like I am in a different world. All sounds are muffled by the waves ebb and flow. Very dreamy.

This image was created after I watched and waited for the perfect sequence of surfers to appear with their colorful boards. This imagery was captured on my iPhone, then processed on my iPad. I always begin with Snapseed. I play with the “looks”, then tools: ambiance and details. Glamour glow and vignette. After, I played with Distressedfx, for color, texture and mood. iColorama has wonderful paint and watercolor options, that enhanced the image. I finally blended that result with the original snapseed version. I like how I was able to replicate the dreamy ambiance in my capture. 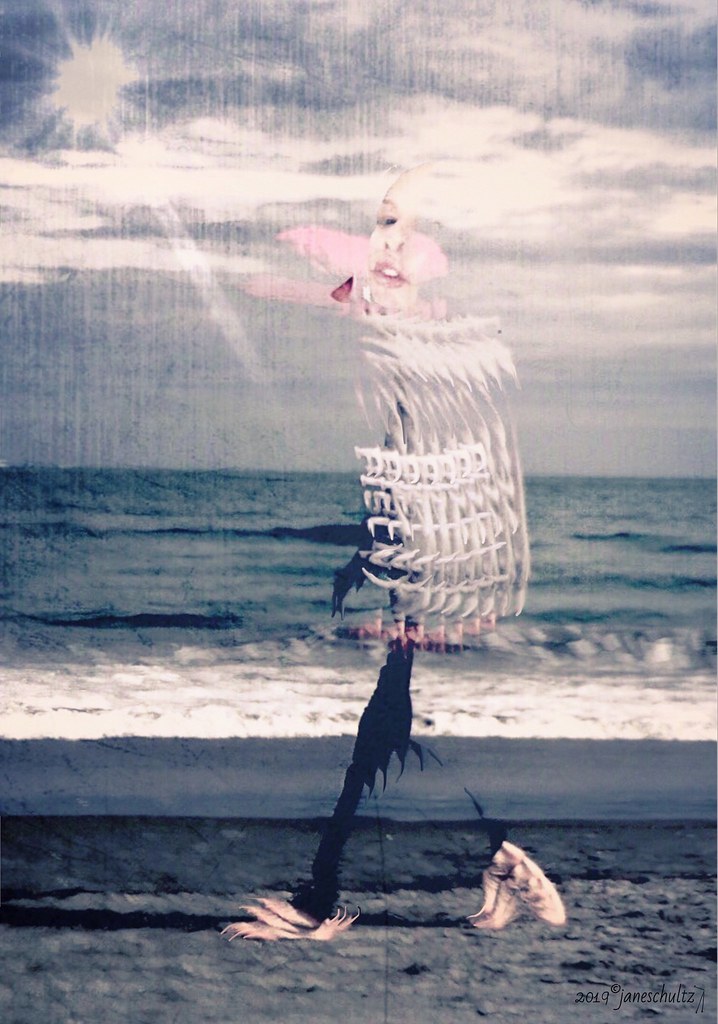 Slow Days at the Beach 6 by Jane Schultz (before 1st.light)
App used: SlowShutter, Procreate, Scratchcam, Lenslight
Backstory: I wanted to create the feeling of walking along the shoreline as summer draws to a close. This another in my slow shutter beach series, featuring me at the walker. I love how the long exposure interplays with movement and light, creating abstract imagery. 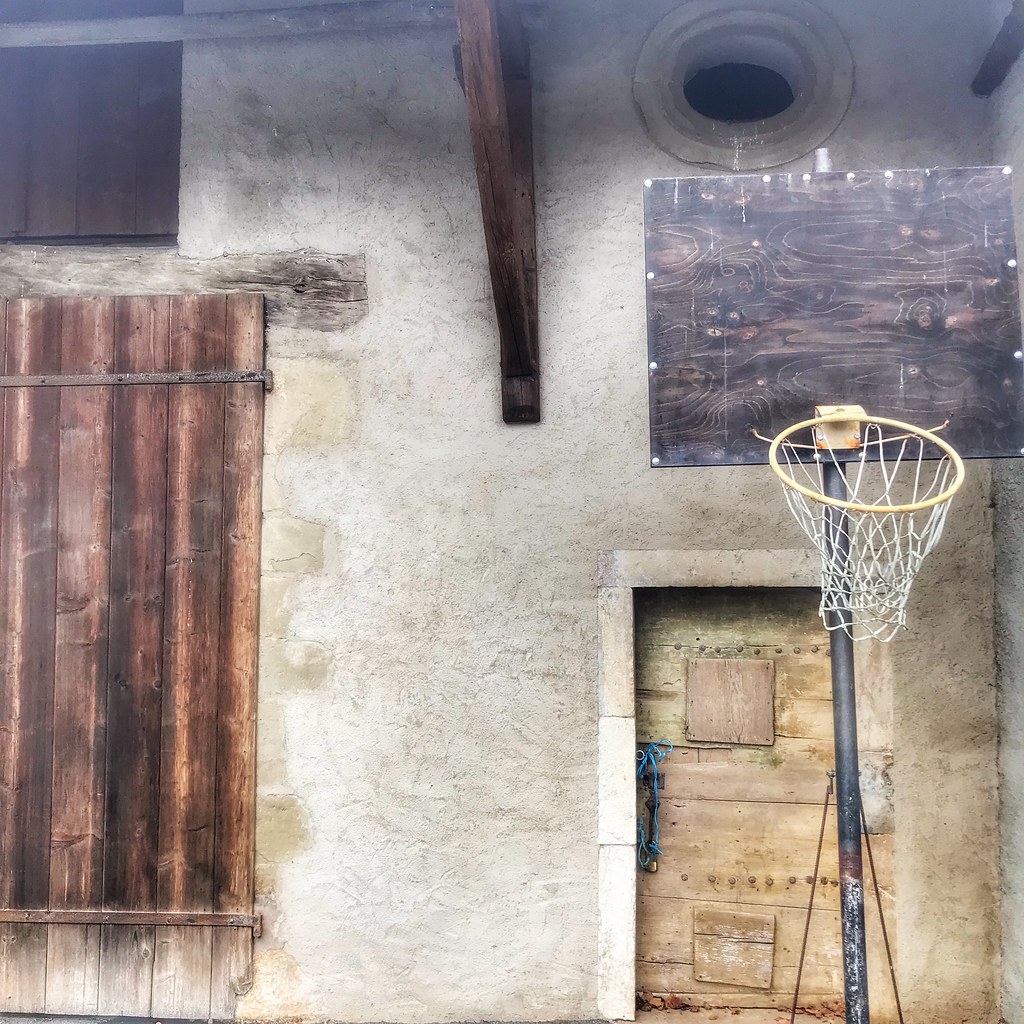 Old and new by Tomaso Belloni
Apps used: I shot with the default camera app on an iPhone 7plus and edited with Snapseed.

Backstory: A rural building in Switzerland did not seem very interesting to photograph, but then I noticed the basket and found an angle where almost no line was straight. With the limited range of tones this gives me a sense of incompleteness. 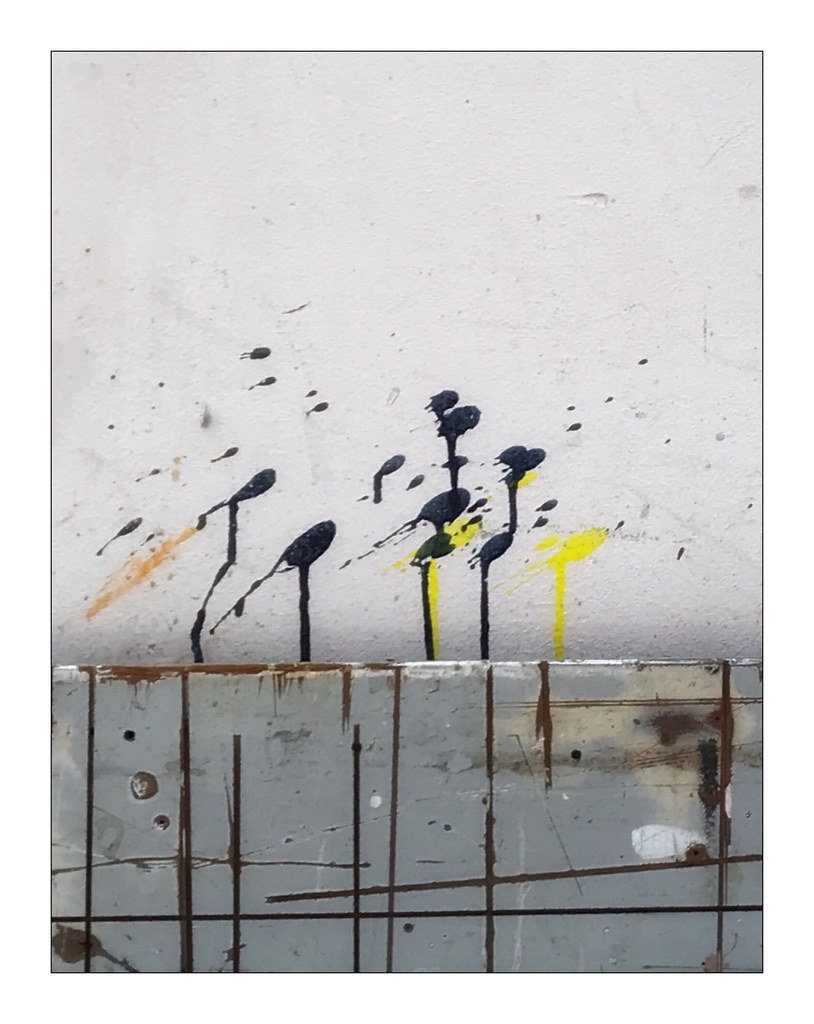 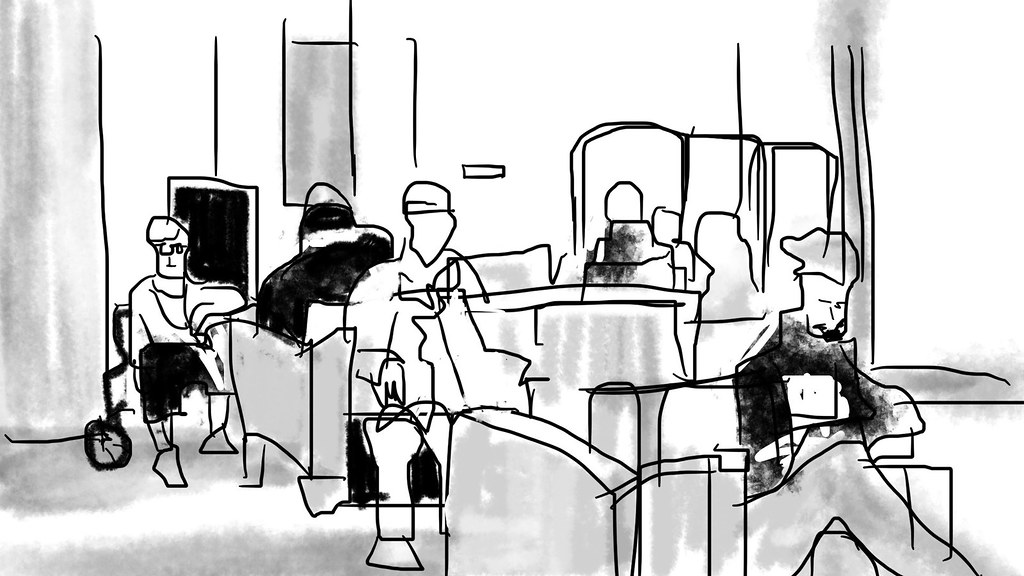 My purpose for sketching (besides to pass the time and have a little fun) is to capture an observation. It’s a note to myself about something I noticed. An iPhone is a handy tool for doing that.

I’ve been trying different methods and tools. A line drawing is fast and easy to do and if I have time I can add a couple of tones in a layer underneath the line to indicate darks and shadows. That’s what I did in the black and white sketch. However usually I run out of time and I’m stuck with just a line drawing which is okay, but it doesn’t carry any information about colors or values. I wondered if I could save time and add more information if I used the Vector tool instead of the Pen tool to draw shapes. It could automatically fill in the shape with a color or tone. I would lose detail, but the sketch would gain graphic interest. So, I tried it as an experiment and sure enough, it worked. The Vector tool was more efficient. It used half the number of strokes compared to the black and white sketch saving time and producing an image with graphic appeal. I liked the result.

I did both sketches using the Sketch Club app with a pen stylus on my iPhone 7. The black and white sketch was done with the Fountain Pen variant of the Pen tool in one layer and the Oil 1 variant of the Brush tool in a lower layer. I used the Vector Tool set to Fill in a single layer for the color sketch. 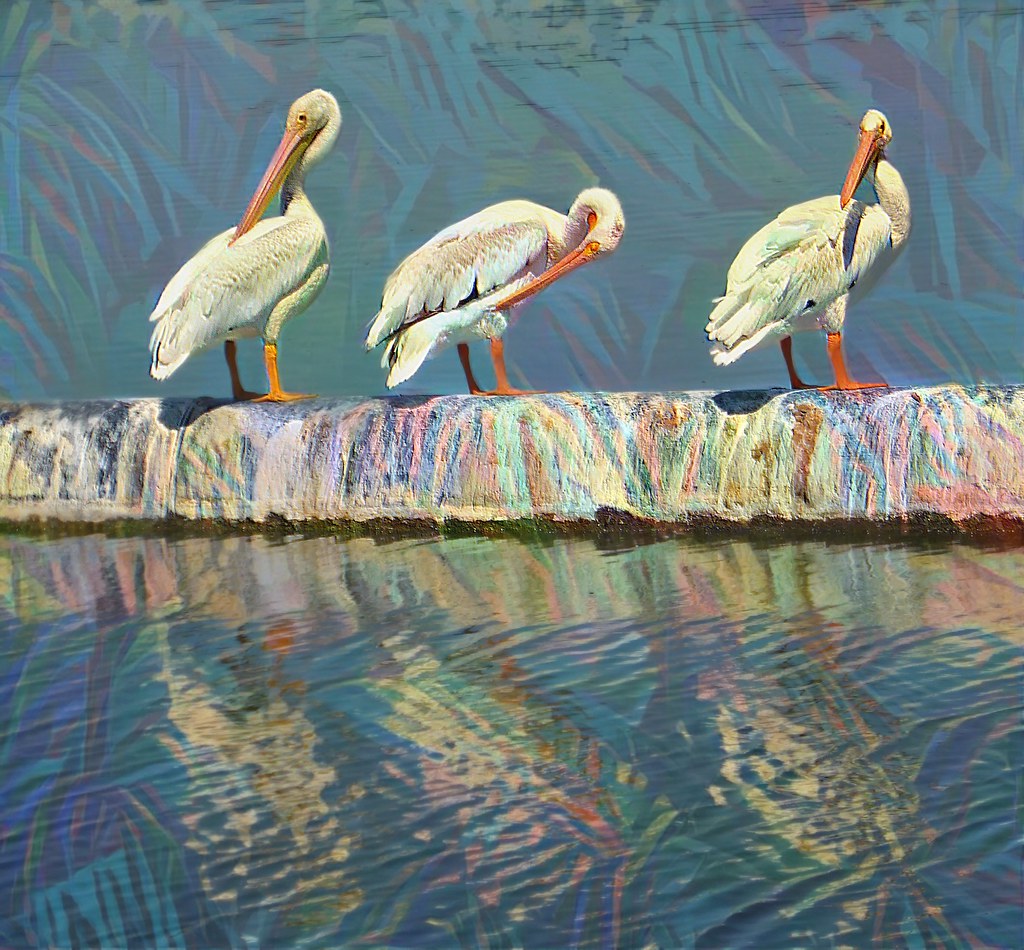 3 Pelicans reflected by Michael Brunsfeld
App used & Backstory: For this image of Pelicans, I started with Snapseed where I retouch/remove bits I don’t wish to see and adjust color and density. Then I open that in Dreamscope and try out some filtered versions. Then in iColorama, I composite the parts I like through masks that help me isolate areas to adjust, using blend modes -sometimes for their texture (luminosity) and sometime for this color components. I walk my doggie every day and often try to find interesting places to walk. This was at a bird sanctuary/nature reserve/water treatment plant near my home. 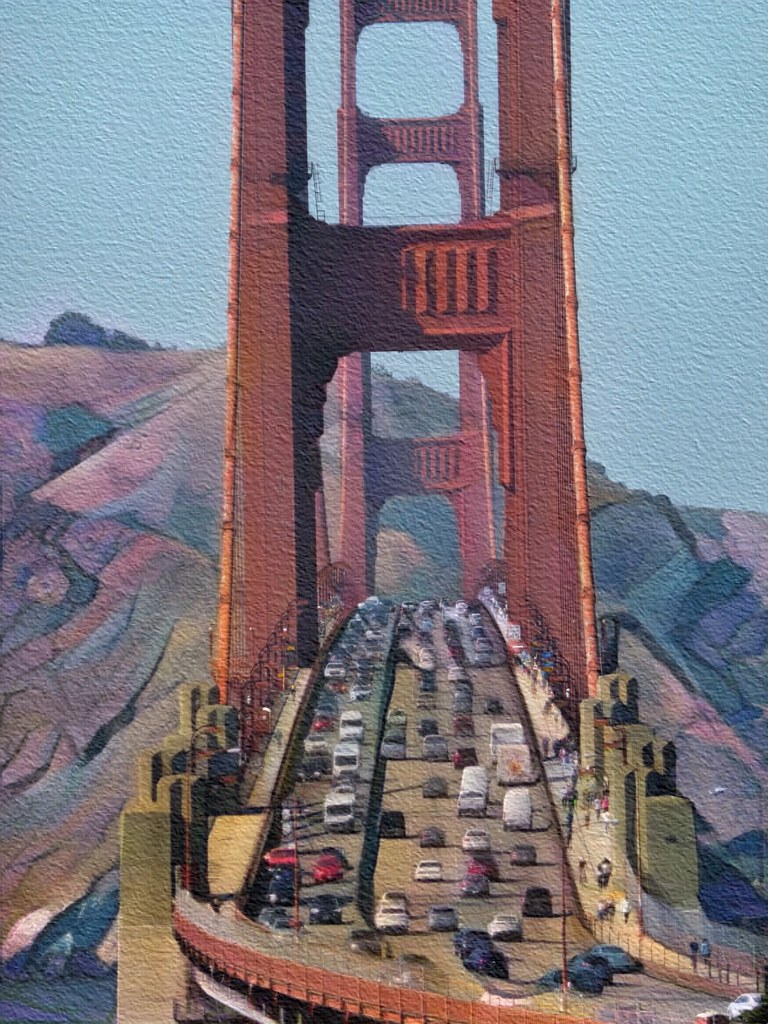 Glorius GG Bridge by Michael Brunsfeld
App used & Backstory: For this image of the Golden Gate Bridge, I started with Snapseed where I retouch/remove bits I don’t wish to see and adjust color and density. Then I open that in Dreamscope and try out some filtered versions. I chose a soft, high-contrast version that I liked. Then in iColorama, I composite the parts I like thru masks that help me isolate areas to adjust. I began by making a mask to allow me to treat the background hills separately from the bridge itself. using blend modes to composite within iColorama—sometimes for their texture (luminosity) and sometime for this color components.  I always wondered WHERE photographers were to have this vantage point for the bridge, and a friend of mine suggested this “field trip” to Fort Baker . . . Aha!!! This was the spot!! 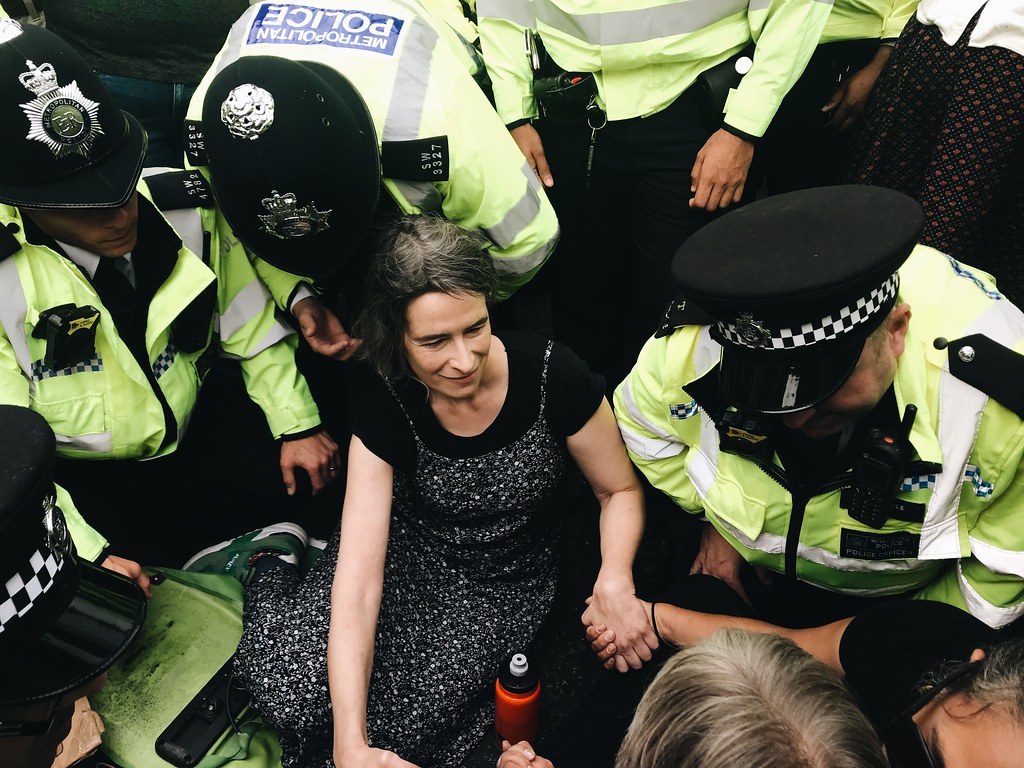 Shut down Parliament, shut down the streets by Rob Pearson-Wright
App used: iPhone 7 Plus