Welcome to this week’s Apps Uncovered, our weekly feature, showcasing iPhone art and photography from around the world. Another superb showcase, thanks to you, our iPhoneographyCentral Flickr members who submit your incredible mobile images every week to our Flickr group every week.

One of the joys of photography is discovering the extraordinary in the most ordinary subjects and my image selections this week are chosen with this in mind – and of course a few others thrown in for good measure. Our lead image spot goes to Occhio Privato’s for his keen eye, spotting this most harmonious collection of ordinary shapes, colours and textures and framing them in such a way whereby the elements are balanced to make an altogether highly pleasing image – I hope you’ll agree! I also love the paler palettes of the first two images including Mark Walton’s stark abstract – the world of iPhoneography can be such a dark place sometimes and it’s great to see these light, fresh hues.

Also I urge you to read Trish’s touching backstory to her fabulous image “Love, actually.” A wonderful cathartic approach to her photography which I highly applaud, especially since she shared it with us here at iPC. 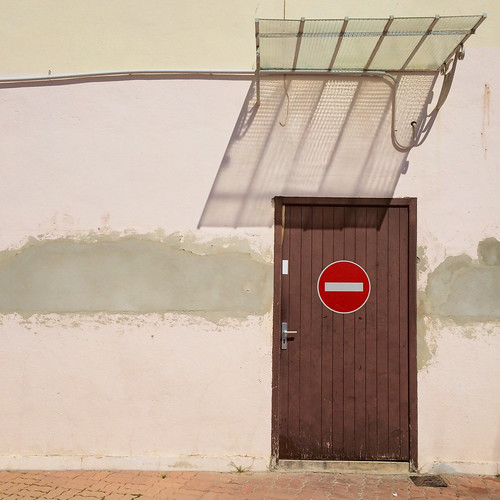 Apps used: Camera+.
Backstory: I took this picture on one of my random “photo walks” round London. The end wall of a row of terraced houses had a mural painted on it. I don’t often photograph other people’s art but I liked the way the crude, unfinished repair provided a counterpart to the row of painted flags. And the colours were harmonious. Taken withCamera+.

Apps used: I shot all on iPhone 5 with the Kitcamera. Grunge lens and Pro 160 film. Converted to bw and framed in Superslides and  then I made in to a collage using the app LiPi.

Backstory: This is part of an ongoing series of mini post the colour version individually, then make them bw, then a collage. Reeling from a recent romantic disappointment, I happened to notice a chair with a heart in its design while having lunch at a cafe. I decided that no matter what my sad tale was, love still is all around, if only one looks. Not just romantic love. I know this must sound like dialogue from the film “Love, Actually”, but that’s okay. I am still a hopeful romantic and not ashamed by it. So, as I find hearts in and around New Orleans, I take photos of them. 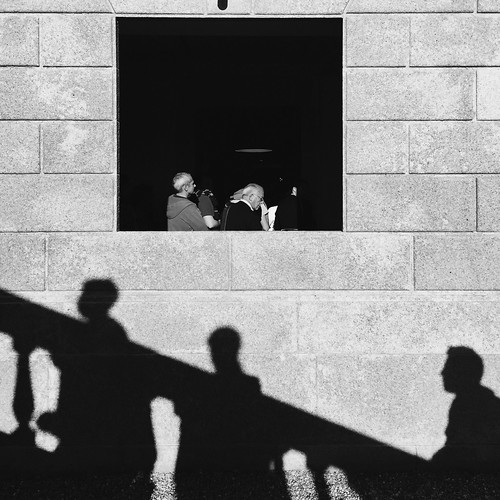 Apps used: Processed with VSCOcam with b1 preset 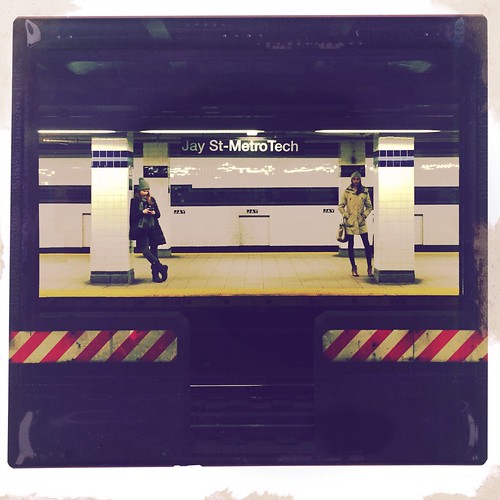 Apps used: Shot on an iPhone6 with Oggl, using the new Eric lens and Manneken film, whose border works to support the balance of the composition.
Backstory: This particular station in Brooklyn affords constantly great opportunities for across platform captures of commuters waiting for their transfer. This shot was taken a few minutes before midnight, on my way from Brooklyn to Manhattan at the start of this years 24-Hour Project. 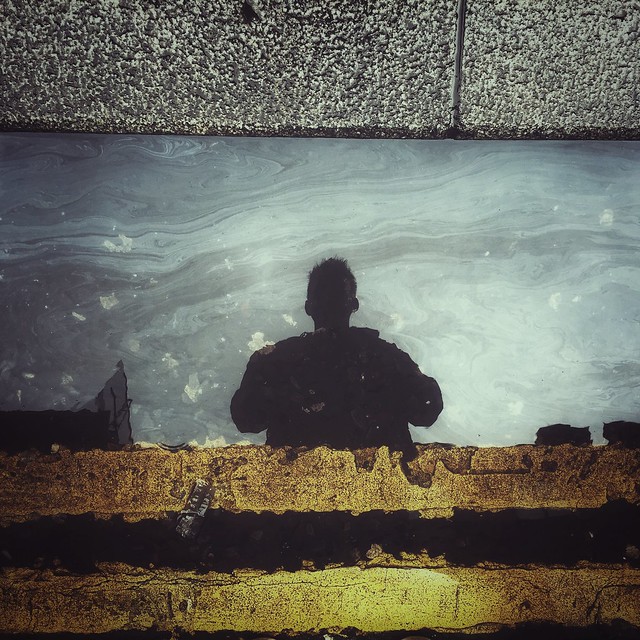 Backstory: The shot was taken in the city centre of Dublin. I was there with Michael Kistler enjoying a photo walk when we both came across this puddle. I saw Michael’s reflection in the puddle and lined the shot up so as to frame it with the grey of the concrete and the yellow of the parking lines. There was a little oil in the rainwater which gives the image a dreamy feel. I used the native Apple camera and cropped and did some work on contrasts and highlights in Snapseed.

Apps used: I shot the original image with ProCamera 8, Filterstorm Neue for vignetting of the background to add darkness, followed by Stackables and Handy Photo for texture, finally finished in VSCOcam for color.

Apps used: iPhone with Hipstamatic, SlowshutterCam, Superimpose, SimplyB&W, Diptic
Backstory: Most of my iPhone photos emerge with the Hipstamatic camera, some even with the normal iPhone 5 camera or with slow shutter camera

When I start working I do mostly with Superimpose, I put layers from scratches and structures about the first image, which I collected on my iPhone, even color planes and light on specular surfaces.

If thereby the original portrait layer is partially obscured, I put at the end again a black and white layer above it that I have created with “SimplyB & W” from one of the previous versions, as the portrait was still clearly visible, and reduce the opacity of this layer.

With Snapseed and Photogene I adjust contrast, color, sharpness and lighting conditions or add a blur – as in this case.

The landscape on the right side consists of a simple sea view, only sky and water. There are structures of stains, scratches and during shooting moved branches added, as well as the surface of a kettle made of brushed steel, which gives the narrow light stripe in the middle.

Then I add in Diptic the two individually processed images together and adapt through the filters contrasts and colors. In this case the two images were previously colored, but then I decided for a black and white version, because it fits thematically better.

The content of my images is usually expressing of thoughts, feelings, moods or anything that currently employs me that day. In this case it was a dream – I dreamed that I was somewhere in an isolated area, a marsh without solid ground, and I did not know how I got there and how I can find out.

Thank you very much for your message. I feel really honored and a great inspiration and assistance in respect of technology and the selection of my apps was your book! I hope this information can help others to just continue to experiment with such apps.

Apps used: iPhone with Hipstamatic Jane Lens with Ina’s 1969 Film. Edited in Snapseed and Vintage Colours.
Backstory: I am sitting in the passenger seat looking to the right at the dense fog in the background. I grabbed my iPhone and turned on Hipstamatic Jane Lens with Ina’s 1969 Film to get the most realistic version of the scene..with Flash Off I quicikly took this pic thru the car window. Editing in Snapseed first to crop then moved into Vintage Colours and chose this warm colour as the original was too cool for my moment. That was it..!

Apps used: SlowShutterCam, Image Blender and Snapseed.
Backstory: This image is about as close as I can get to creating a painterly look using photographic techniques. Rather than using SlowShutter to shoot an entire scene, I used it twice then blended the two images together.

The first image was created by slowly hovering the iPhone up, down and around a colourful image in a magazine. This gave me an abstract colour flow to use as a background. I then took a SlowShutter shot of a person walking in a museum (with a white background.)

I then went back and forth in Image Blender to highten the desired painterly effect. Finally, I tweaked the entire piece in Snapseed. 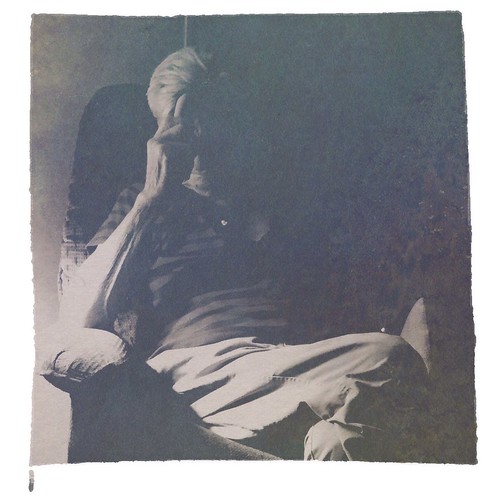 Apps used: Captured with Hipstamatic, using the Uchitel film and Diego lens. The frame was created using watercolor, photographing it with the Camera, then blending the two images in ImageBlender. With Snapseed and Photogene I adjusted contrast, color, sharpness and lighting conditions or add a blur – as in this case
Backstory: My step father lost his wife of 12 years after a several days in hospice. I went to be with him, and this is the day of the event. I dislike invading the private moments people experience, but I thought this captured something we all feel and internalize, yet find so difficult to share.

When I start working I do mostly with Superimpose, I put layers from scratches and structures about the first image, which I collected on my iPhone, even color planes and light on specular surfaces.

If thereby the original portrait layer is partially obscured, I put at the end again a black and white layer above it that I have created with “SimplyB & W” from one of the previous versions, as the portrait was still clearly visible, and reduce the opacity of this layer.

With Snapseed and Photogene I adjust contrast, color, sharpness and lighting conditions or add a blur – as in this case.

Apps used: hipstamatic (lens:Madalena film:BlacKeysExtraFine) handyphoto faded AfterLight
Backstory: I wanted take cherry blossom with shining water drops in the back light. so I sprayed water on it and took this picture using macro lens with hipstamatic in early morning when the sun starts raising. I just deleted a part of the background behind the flower, arranged the tone and add a little bit sharpness. 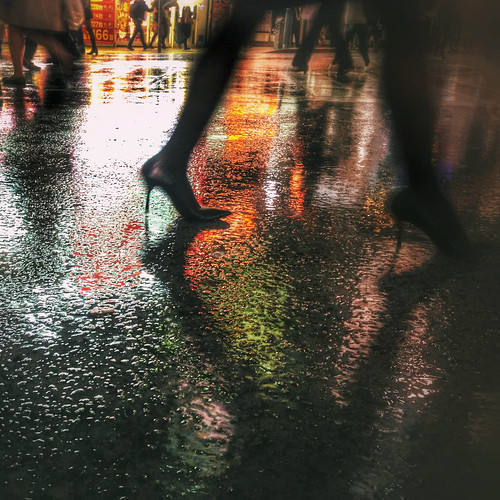 Apps used: Snapseed and Instagram
Backstory: I shot this image in the Shibuya neighborhood of Tokyo on a rainy night. Rainy nights in Shibuya are particularly atmospheric with the combination of movement, light and reflections on the wet streets. I wanted a low point of view on this image to exaggerate the perspective and convey the lively energy of the night. I was fortunate enough with the timing to get several layers of passersby to give the shot some added depth. I didn’t do a great deal of post-processing but did tweak tones, saturation and contrast in Snapseed before cropping the image in Instagram.