Some strong work emerged from the gallery this week which made choosing this week’s theme easy; that of figures; mostly solo. We want and need to be together but sometimes for our health’s sake, we also need to be apart. This is a anxious time for us all but also a time to take care of one another. Enjoy the wonderful images from these talented artists from all corners of the globe and I wish good health to each and everyone of you and your families.

“a meeting” by hugely talented Vadim Demjinov is this week’s extraordinarily beautiful lead image. A peaceful, romanticised scene depicting two people meeting on a path, the simplest and most precious of acts. Vadim’s skilfully uses light and colour together with his clever compositions to draw the viewer into the scene with the leading lines of the path snaking towards the two figures on the horizon, both encircled by the arching cover and bending of the tree branches. Wonderful work Vadim!

Vadim uses mainly uses Snapseed and iColorama in his work. He describes them as “rich programs according to their capabilities.” and this week, I am delighted to say that I am giving away 50 copies of the hugely versatile and unique app iColorama (each worth $4 /£4) away to subscribers, both iPad and iPhone versions.

Make sure you’re subscribed to the newsletter to be notified of the giveaway coming this week.

Rounding out the rest of the group this week are the following artists:

Thank you all for contributing your wonderful images and we look forward to discovering the stories and techniques behind them. If you have any 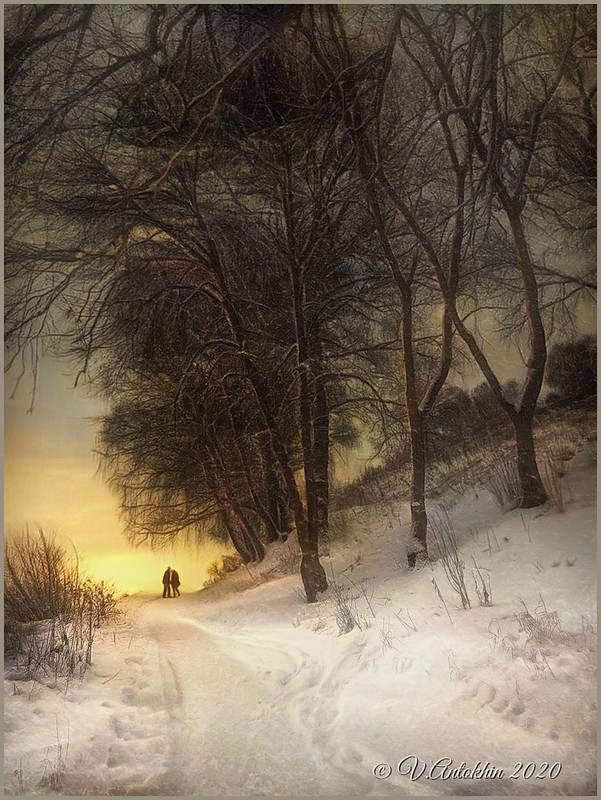 Apps used:For processing, I mainly use the apps, Snapseed and iColorama. These are rich programs according to their capabilities.
Backstory: Walking on a winter evening along the paths of my beloved town of Tarus, I met two people in love, they walked and did not notice anyone. I looked around, they had already climbed to the very top of the trail when I took this picture. Evening, sunset and silhouettes of two lovers. It seemed to me a very romantic plot.
Vadim Demjanov(Antokhin) 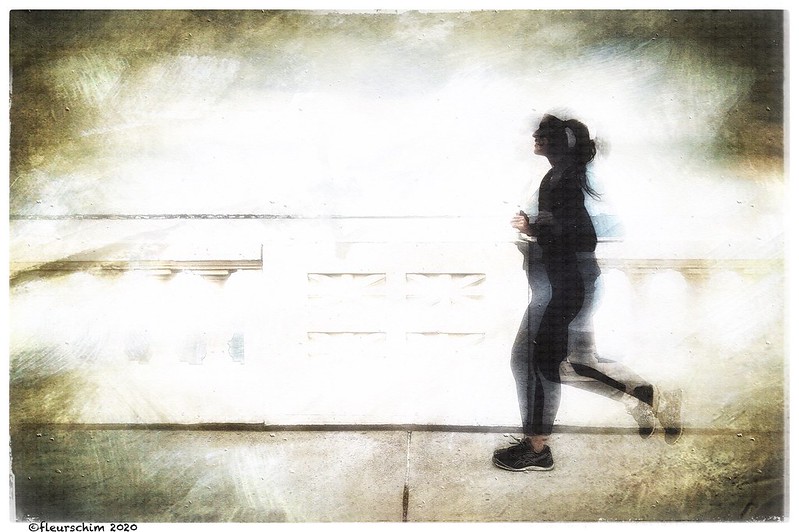 Part of the Scenery by Fleur Schim

Apps used: iPhone11pro Bluristic, Snapseed Distressedfx, iColorama and Imageblender Backstory: I always like to explore new apps. I was introduced to Bluristic, but never really played with it. This time I was standing in one spot, and kept my iPhone 11 Pro stable, opened up Bluristic, and captured multiple images of joggers running along the boardwalk. Once I saw that I had fun images to edit, I later edited on my iPad Pro in Snapseed, DistressedFX, colorama app and Imageblender app. As you can see, I maintained the cool imagery of movement with a blurred image and also created an aura of joy. 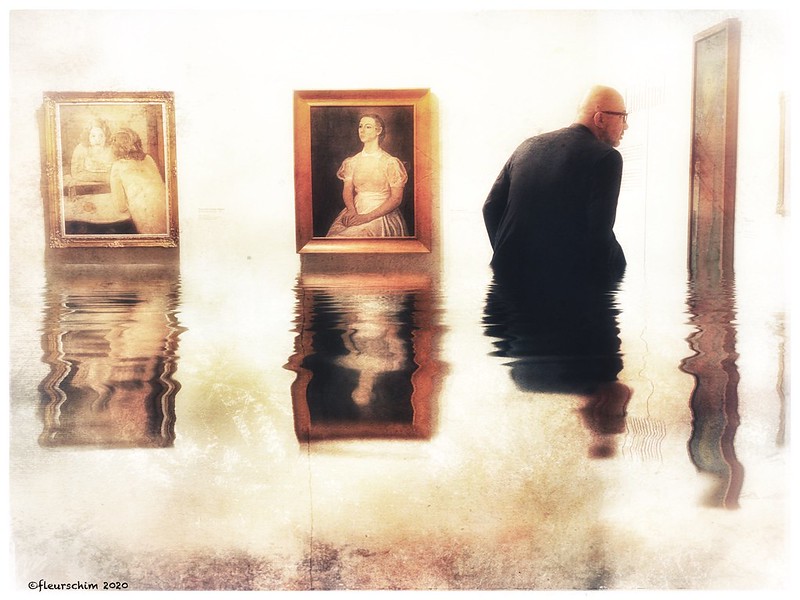 In the deep by Fleur Schim

Apps used: iPhone11pro, Snapseed DistressedFx and Reflect. Backstory: Ok I was walking around the Museum of contemporary Art in Mexico City. I enjoy taking images of gallery visitors while I walk around and enjoy the art. This individual was in deep thought, and I thought it was an opportune capture. Later, while editing on my iPad Pro, I filtered in Snapseed and DistressedFx. Then, I thought it be fun to see what the image would look like in Reflect. So happy that that image shined with the ripple effect of the water. I thought it turned out pretty cool! 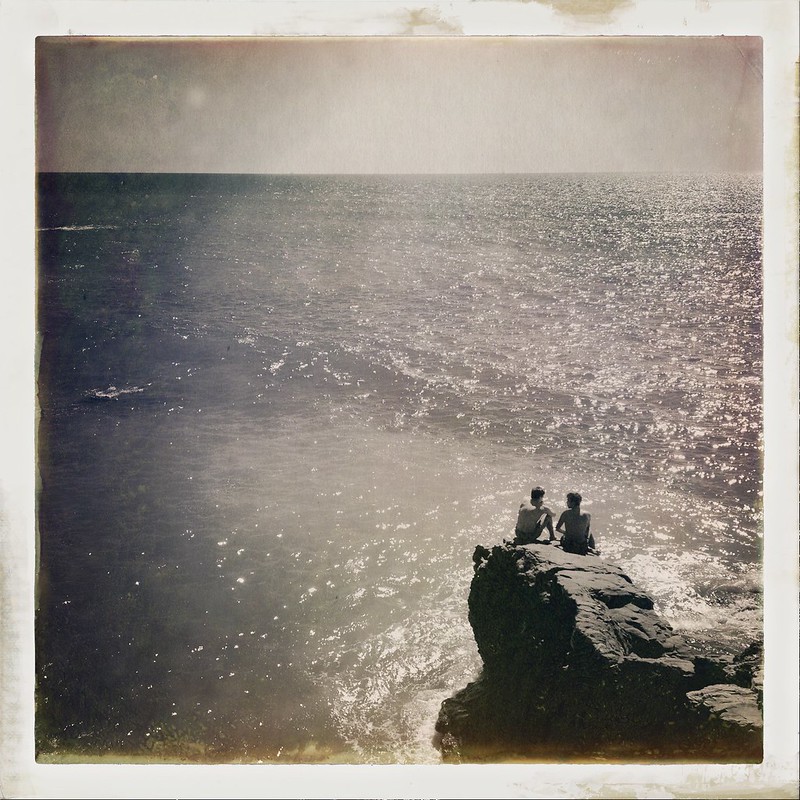 The boys of summer by cristina rossi 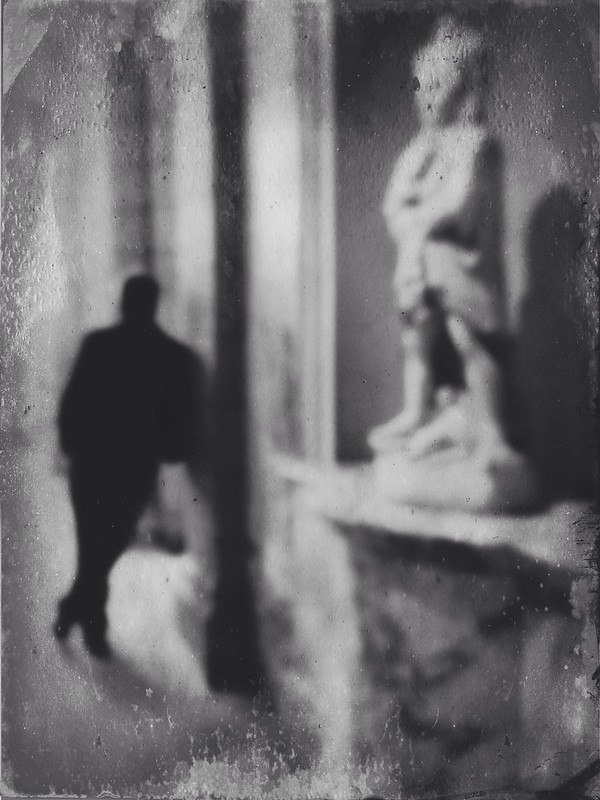 At Ease by Nigel Reader
Apps used: Shot with native iPhone camera, processed in Hipstamatic Tintype, VSCO s5 preset and Snapseed.
Backstory: This is a museum shot (the ever excellent V&A in London) and was taken whilst I was waiting for a few moments near the exit. The relaxed pose of the man (also waiting!) attracted my attention and I thought I could juxtapose it with the statue. It was taken with the native iPhone camera. I didn’t want detail overloading the image so I processed it in Hipstamatic Tintype which not only took out detail but also contributed what I thought was a certain timeless quality. I wasn’t entirely happy with the Tinype colouration, either colour or sepia, so I then opened the resulting image on VSCO to refine it to my liking. Finally a very little tidying up in Snapseed (to remove a couple of distractions) completed the processing. 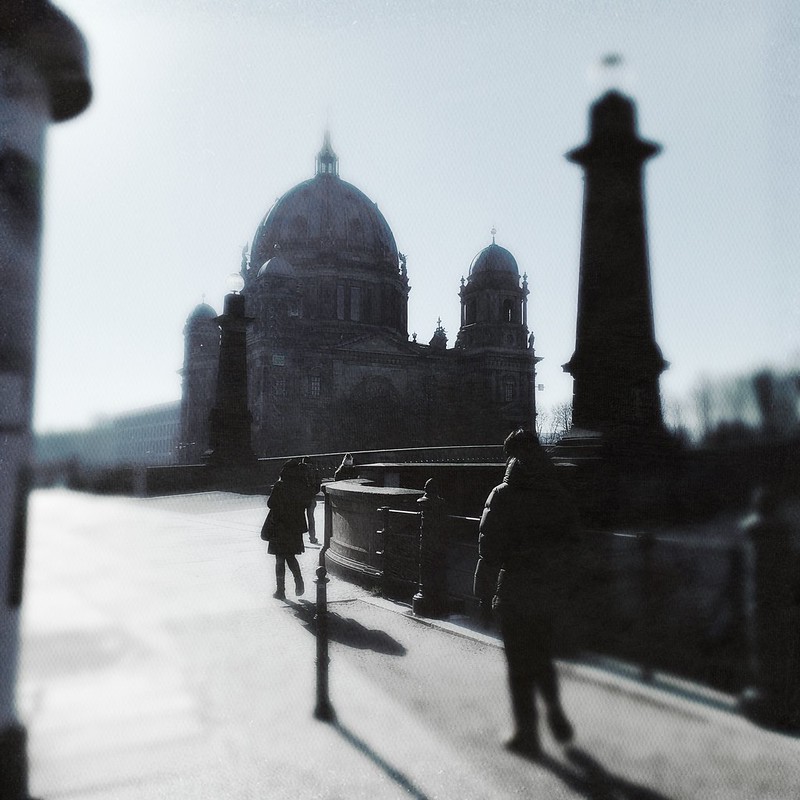 Almost There by Karen Axelrad
Apps used: Hipstamatic with Tinto1884 lens, A-Type Plate film and Standard flash
Backstory: View towards the Dom, and the sun finally shone creating great shadows. I took this on my way to Museum Island in Berlin using the shuffle mode in Hipstamatic, and though I was blinded by the sun, I was happy with the result. Sadly, there won’t be any more museum visits in the near future as all are closed. 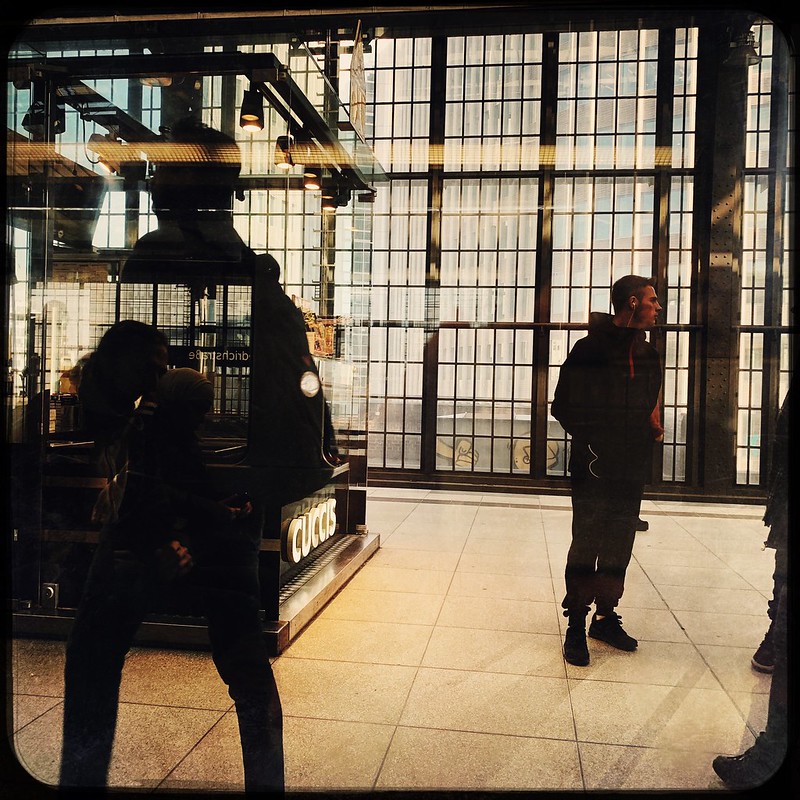 Through Train Window by Karen Axelrad
Apps used: Hipstamatic with Florence lens, Love81 film and TripleCrown flash.
Backstory:I took this photo through the window of a train. I love the mixture of the reflections from the window with the people passing by. 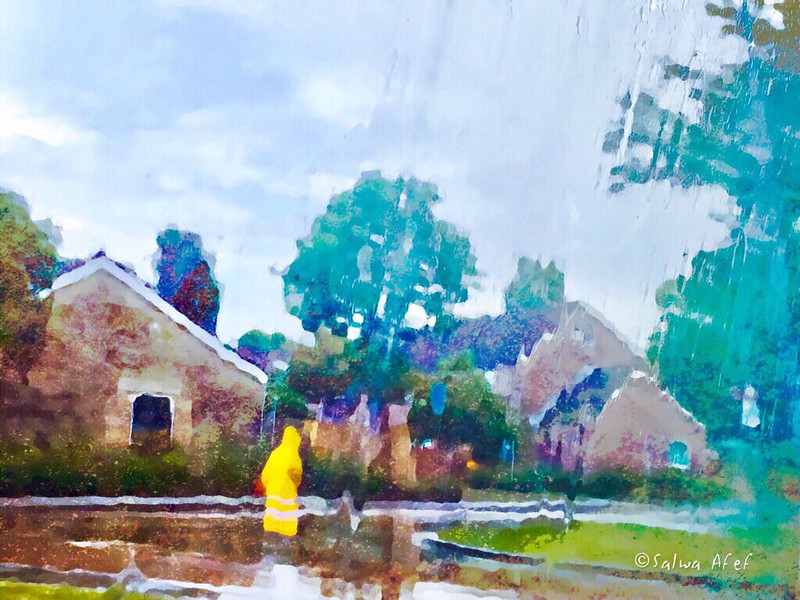 Apps used: Apps Used: Slow shutter cam + iColorama + superimpose +iWatermark.
Backstory: I love to take photos behind the glass, especially on the rainy days, watching people’s actions and the effect of the rain on the glass.

I took this photo while I was waiting through the car window!
Some editing: simplify /iColorama, adding texture/superimpose! 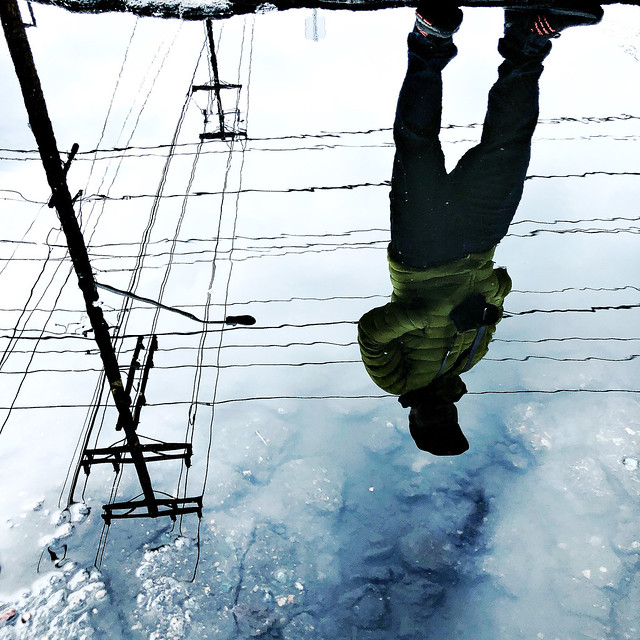 Apps used & Backstory: Captured on a SoDo photowalk, with my iPhone using Hipstamatic. Always love a reflection and some clouds. 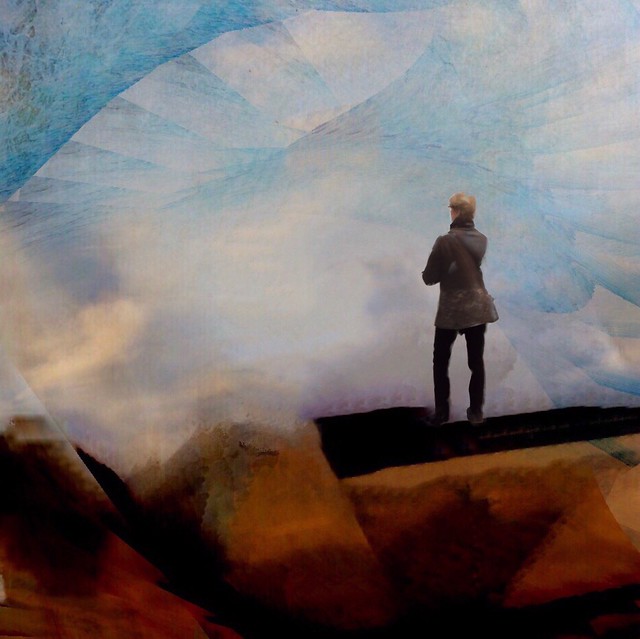 Nouveau Monde by pahamel-mtl (p.a. hamel)
Apps used: iPhone, Decim8,SuperimposeX and PhotoshopFix for IPhone.
Backstory: The idea behind this photomontage was to anchor a real character in a redefined universe. Like the figurehead of a ship, this woman seems ready to face this “New World” with determination. The background was created with Decim8. The character was integrated into the image with SuperimposeX and further edited using PhotoshopFix for IPhone. 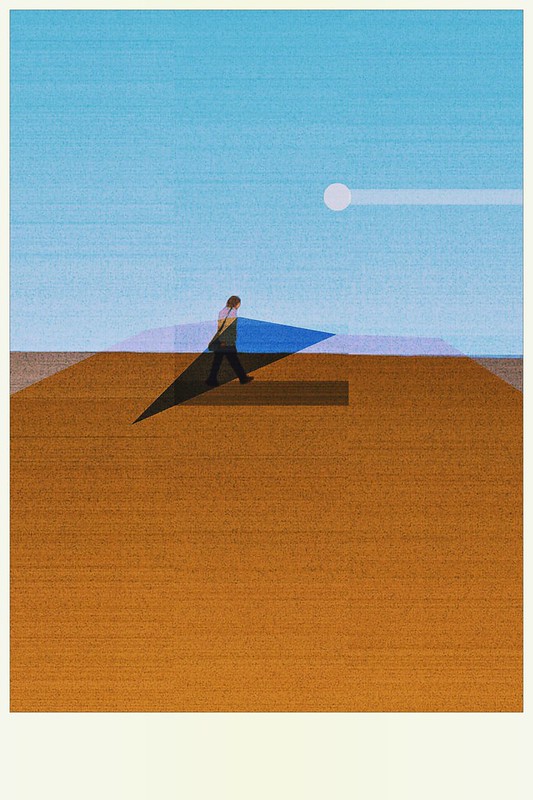 dune and sky by jun yamaguchi