A wintry theme continues in this week’s Apps Uncovered and although our stunning lead image “Gaze” by newcomer Cindy Buske isn’t overtly wintry, the desaturated colours and unblinking stare are cold enough. You will find subtle colours in nearly every image this week and I believe the much used phrase that less is more. In our gallery this week, the brutality and harshness of the winters some of us are experiencing seems to be bringing out the best in our iPhoneography talent; the beautifully lit and carefully cropped skeletal leaves of RkM Photo’s “Painted glass”, Kerryn Benbow’s graceful bowing grasses in “One Creates in Order to See” and the wonderful textures and colours caught in M a r i k o’s “Vanity” swan image. I adore Cathrine Haslor’s “The Winter of Listening”, the shrivelled, downward leaves like musical notes on a scale, perhaps these thoughts prompted by the beautiful title. Sheldon Serkin finishes January’s Apps Uncovered with his cleverly composed image “Upstate”. Thank you all for sharing your wonderful images this week!

This photo of my daughter was taken using Hipstamatic Classic – Tinto 1184 lens + C-Type Plate film. No additional post-processing was used.
My daughters and I often collaborate on the artistic side of a photo before it is taken. In this case, we wanted to create a traditional portrait with a bit of an ominous, eerie twist. The Tinto lens works well for this due to its effect on human eyes. We added black lace (which is actually the bottom portion of a dress) to enhance the dark undertones and give her a veiled appearance. I used a black cloth backdrop and two soft, homemade “studio” lights. The rest is in her gaze and our comfort level of working together. 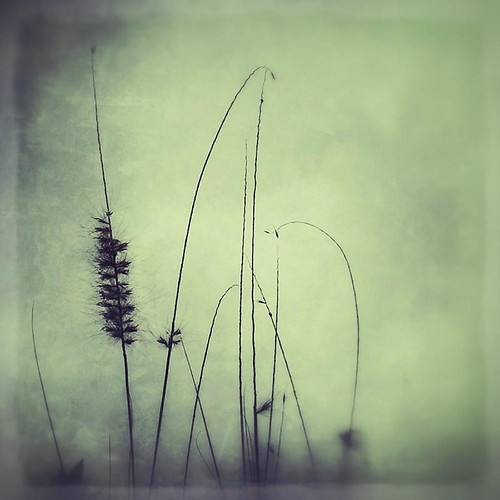 One Creates in Order to See by Kerryn Benbow

I was walking out of a coffee shop at work, and noticed a wall of windows that had these images of leaves painted on them. I took a quick shot with the camera app on my iPhone, and used Snapseed to edit it. It was really very quick and easy; it didn’t need a lot of processing to make it work. I love the detail in veins of the leaves.

Here is the backstory:
Everyday I go to this lake to walk my dog. It was early in the morning, the mist just cleared away and the sun came out turning the trees red. The water was very calm with great reflections and the swan came to greet me. Just one of those lucky moments, I guess!

Apps used:
The picture was taken with Hipstamatic Jimmy lens and DC film. I edited with PhotoToaster and added a texture with Distressed for a painterly effect, then used Blender to blend with the original picture to reduce the effect and to emphasise the original colours. 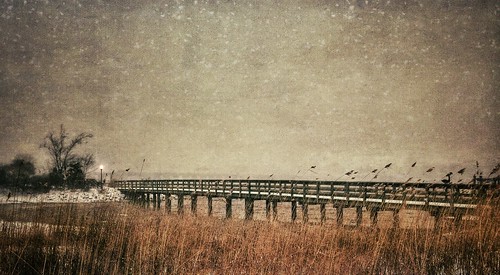 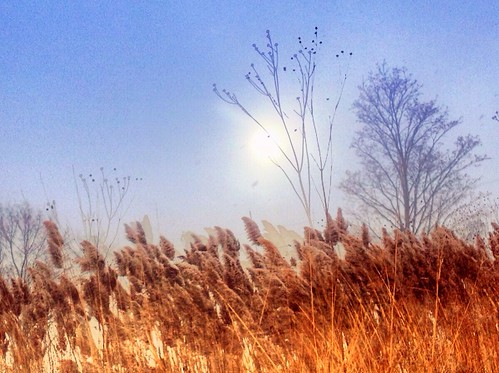 Sun Shining Through A Winter Gale by Lawrence Lazare

Backstory: The winter in the Midwest has been especially brutal this year, but I still manage to get out and take photos every chance I can. Last weekend I went out to one of my go-to spots, a beautiful red barn a few miles from my house. Not only was it below zero and snowing that afternoon, but there were strong winds blowing as well. As I was shooting shots of the barn, suddenly the sun started to shine through thick gray clouds. I got down on my knees by a field of tall grasses and shot directly into the sun with strong winds making the grasses dance, while my face and hands grew numb. I was so cold capturing this shot that I lost much of the feeling in my fingers, and had to get back to my car as soon as I took the shot so I wouldn’t get frostbite.

I shot the image using VividHDR, my favorite HDR app. It’s a lesser known HDR app, but it’s by far the best (and fastest) HDR app out there. The wind was blowing so hard when I took the photo that I got some serious HDR ghosting, something I usually dislike (and rarely get with VividHDR), but in this case the ghosting of the grasses made the movement of the wind become a key element in the image.

Apps used: For post-processing, I used my other favorite photo app, Snapseed, and used the “Tune Image” section to adjust the ambiance and contrast so the image would pop a bit more. 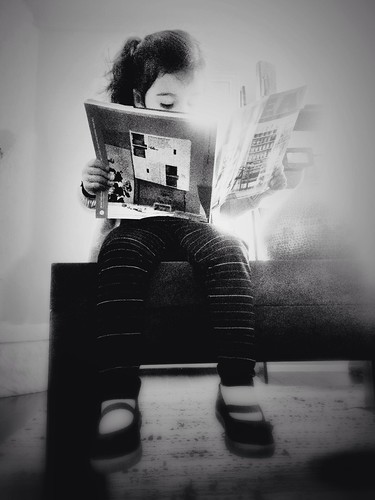 My daughter is my number one model, and every time I have a good opportunity to photograph her in any daily activity that we share together.
For this edition I used Snapseed option Tilt-Shift to blur the background image and Noir to highlight the black and white photography. 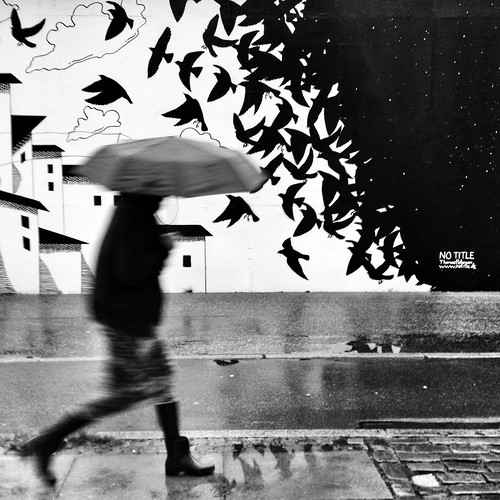 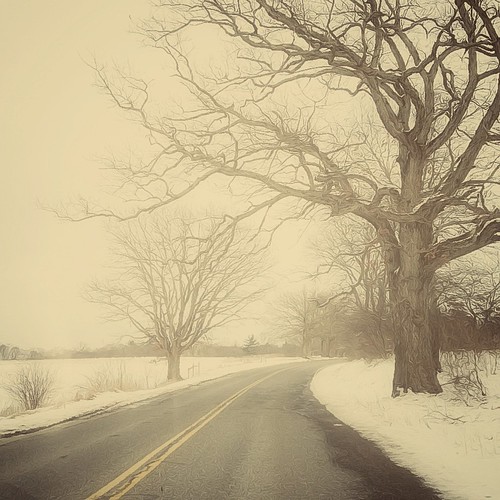 Backstory: I took this picture for my recently abandoned 365 project (it seemed like a good idea to start one at the time). I took this image on some back road in Massachusetts; I think it was near a large veterinary school. The trees in New England are so beautiful and full of character, so anytime a back road can be taken I almost prefer that route. So the two main apps I used to process this image are Shock My Pic and Snapseed. I love how Shock My Pic works on many landscape scenes; creating the tiniest of details. In Snapseed I used one the Retrolux filters, which is a first for me. For some reason I never got around to playing with the Retrolux filters. I love the soft golden tone and the illusion of possibly fog or mist. I will definitely use these filters again!

Apps used: Hipstamatic Oggl
Backstory: This image is a representative vignette of a trip I recently made to a Rehabilitation Center where my Father was recovering from a hospital stay.
The center was decorated in a 70’s like style that made the whole visit very retro.
in a hallway corner,I was struck by the artful simplicity of this artificial flower arrangement and the sparse but solid furniture. Taken at face value this was just another stylish interior decoration ; however, when seen in the context of the location, this still life took on another perspective. It was as if this ensemble,with its dated elegance, was trying to “tastefully” distract both visitors and occupants from the human wreckage all around. So,like all photographs ,the ambiguities were always present.
I used Hipstamatic Oggl to shoot and process the image. I chose John S & Uchitel 20 film; this combo provided the matte like detail and desaturated “Polaroid” tones I wanted for the atmosphere of the final print. 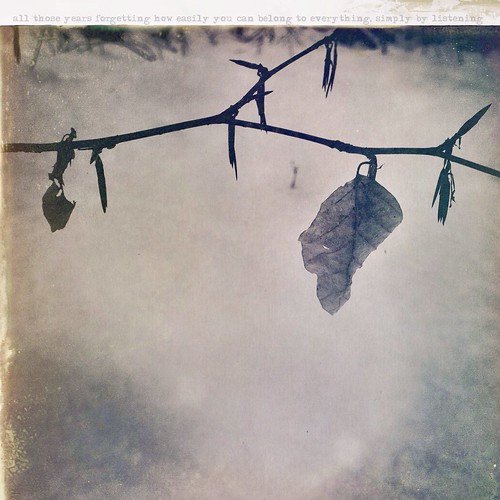 The Winter of Listening by Cathrine Halsor

The Story behind:
Visiting one of my favorite forests here in Norway, I wanted to try out the Hipstamatic Uchitel 20. The beauty of the winter here up North gives me a kind of Zen feeling. The trees are just silently waiting, but still majestetic and beautiful. I think,being among these trees gives me a sacred feeling, which I try to apply to my images.
I appreciate the vintage feel this Hipstamatic film creates and the golden frame gives it a kind of hope for a new spring. I cropped the white frame in Snapseed, just kept one side where I added my text. I like the storytelling with both image and words. I did some small adjustments in Snapseed as well, the light and contrast. Phonto were used to apply words.
I enjoy creating visual poetry. 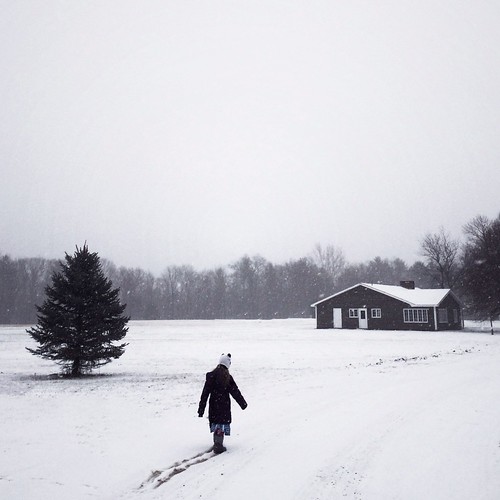