Welcome to this week’s (jam-packed and info-rich) Apps Uncovered, our weekly feature, showcasing iPhone art and photography from around the world.

QUICK ANNOUNCEMENT: My iPC partner Bob Weil has been busy promoting his fabulous new online Artistry course (half-price for last day today!) and will be back next week – hurrah!- with a brand new selection.

Some weeks the iPC Flickr group is flooded with exceptional artworks and last week was certainly one of those weeks making it an absolute pleasure to pour through your images but at the same time, having to make some difficult choices. However, the lead image Prendre soin by _N_X_(Nicolas Xanthos) was not a difficult choice, such a beautiful and dreamy image accompanied by a really tender backstory which I encourage you to read.

Following the dreamy theme, regular Apps Uncovered star, Susan Blase, delights us with another one of her magical, playful dancing flowers; this time a Poppy singing in the light-popping-bokeh. David Nagel brings a different mood altogether with his high contrast black and white (daisies?) but none the less beautiful. Notice here how both Susan and David have both used Hipstamatic’s Oggl to achieve completely different effects. I love David’s second image; the composition and processing of the table and chairs is perfect. David is a genius at creating a certain tension and melancholy in his images that is very compelling to the viewer. (Notice the crack line in the wooden table).

Haywire by Lisamjw is another beautifully composed image. It is a great show of strength of the artist who produces a striking image with such few elements and Lisa is demonstrates this power in her image “Haywire”. I urge you to check out the rest of her Flickr stream. We have a beautiful gold texture abstract from Sandra Nykerk Shadows on the Curtains followed by four pictures of the north sea beach by borisbschulz2009, processed in Snapseed and the unmistakable Tiny Planets app. A great black and white image from Brendan Ó Sé who captures these stripy souls existing separately, captivated in their own mobile planets. The black legs connect these two visually and just marvel at all the different patterned textures Brendan’s caught here, a perfect choice to go black and white, I suspect the colour version may not have been half as powerful with colours proving too distracting. Brendan’s second image also makes good use of pattern in “Empowerment”. In this case, the colours do not distract from the scene.

Cary Larrabee (Skeletoyz) makes wonderful use of TangledFX in his image Creekside (Please check his Flickr stream for more examples of this wonderful style). More illustration this week comes from Jane Fiala’s Waterways in Burano, such a beautiful loose painterly style which although looks effortless will have needed a certain artistic eye to have composed the image in the first place and a sensibility of knowing how to control the app’s effect, i.e. not “overdoing” it. A great creative and surreal submission this week is Ginger Lucero’s Hard-wired and we finish on shinnnnnya’s quiet and softer image humidity…a wonderful image for today’s peaceful Sunday…I hope you all have a wonderful weekend!

You may have seen, or already be lucky enough to be learning iPhone Artistry with Bob Weil’s brilliant new online course (half-price for last day today!). Bob will back next week with a brand new selection of Apps Uncovered! 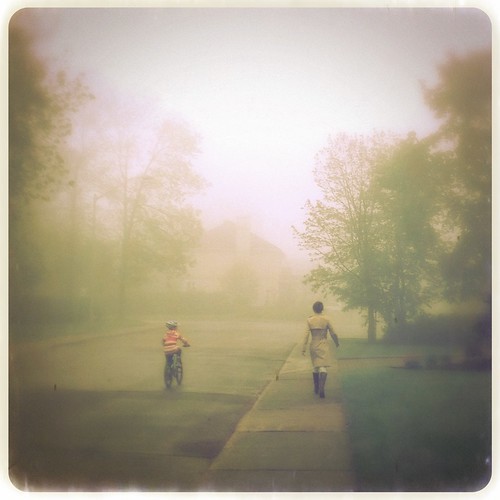 I’ve always loved pictures taken in the fog – but in the city where I live, fog is extremely rare. The day I took this photo, we had for the first time this year fog banks for about two hours. As soon as I saw it, I immediately took my iPhone and I went out into the street in front of my house.
The first thing I saw was my neighbor who was accompanying back home a little girl. There was only them (and me) on the street. I rarely take a picture of human beings, but these two feminine silhouettes, one adult walking and one child cycling, who went into the fog were so touching that I did not hesitate.
I have not had much time to think: when I opened my iPhone, I was already on Oggl so I took the picture with this app. Then I just cropped the image and looked for the best combo. The Monti pack was an easy choice: the Sergio lens created blur and a golden light that highlighted the effect of fog, and the film frame produced a nostalgic effect.
The little girl lived less than two hundred yards away, but my neighbor did not hesitate to accompany her home to make sure that nothing would happen to her. It was an altruistic and responsible act, of the greater for the smaller, of the stronger for the weaker: the act of caring – and that inspired me the title of the photo (“Prendre soin” means to take care). 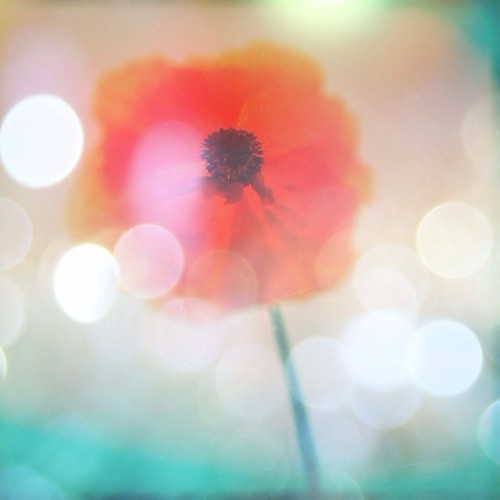 Getting Sleepy by Susan Blase

This shot I took with hipstamatic/Oggl. Poppies are one of my favorite flowers, however the window to shoot them is rather short and even shorter if cut. I was lucky enough to gather a few before a thunderstorm and I shot one against the grey sky. I later wanted to create a sleepy vibe to go with the fowers being synonymous with slumber. I used an app I quite like called Lumie then added to the hazy effect with Mextures. By the time I was done it was very late and I was quite groggy myself, so I simply named it as such.

It had just rained. It was late afternoon, going into sundown, and the the sky was still clouded and overcast. My wife had planted some daisies & bell flowers in one of her garden spots. I was intrigued by the the contrast of the flowers and dark background leaves. I framed the shot to heighten a sense of pattern and flow and took the image. I photographed this vignette in both color and black and white. This was perhaps my favorite rendition. I used only Oggl.No post processing.

This image was taken in St. Charles,Mo. The subject was in an historic museum, containing rooms showcasing life in early Missouri, in the 1800s. To me, this particular corner epitomized a rustic interior.
The setting reminded me of the Shaker hymn”Simple Gifts” and it had a quiet intimacy that was very moving. The only light was from a window on the right and it gave the objects a modest delineation that was so appealing. The furnishing all seemed to be waiting for something or someone, which enhanced the humanity of the still life.
I shot this with Vscocam and chose the E1 preset. I then used Mextures ,conservatively, to add some additional “soul” to the image. 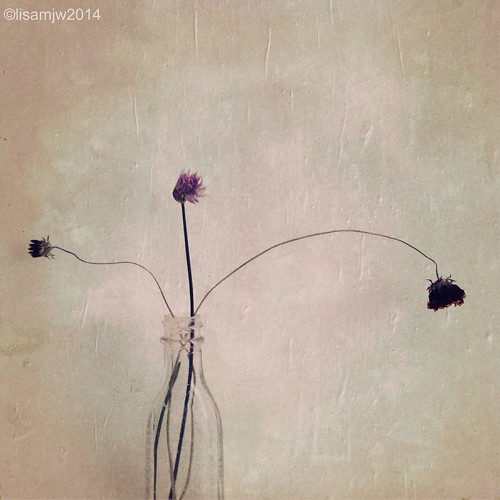 Haywire truly is a happy accident. I was using these three wildflowers, all of which had seen better days, as individual subjects. As I picked them up to throw them away I realized how good they looked together. I put them in the small bottle and started snapping. What caught my eye was how each stem starts out straight then ends up going in a different direction…in an out of order (or haywire) sort of way! Apps used: Hipstamatic camera with Hongdae film/lens combo and iResize. I like this particular HipstaPak for the rich background textures it provides along with the aged patina it gives. 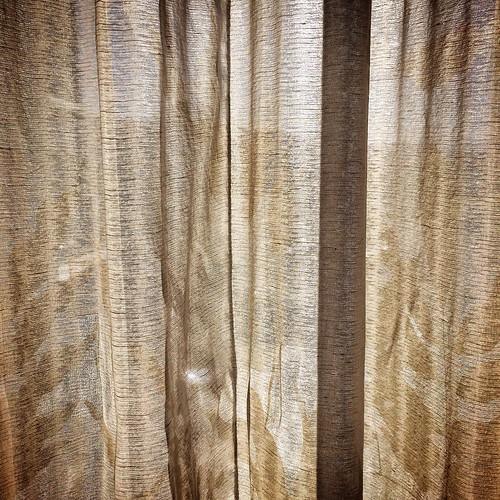 Shadows on the Curtains by Sandra Nykerk

iPhone 5s with Native Camera and Snapseed
I was attending a conference in Las Vegas last week (to speak about iPhoneography!), and while walking through the hotel, I was drawn to the interplay of light and shadows on the curtains against a very large window. In my photography classes, I have always emphasized how important the light is, and I loved how the late afternoon light was transforming an ordinary object into something very special. I often use a combination of many apps to capture and process an image, but this one was taken with the iPhone5s native camera, and minimally processed, using only Snapseed to emphasize the shadows and texture. 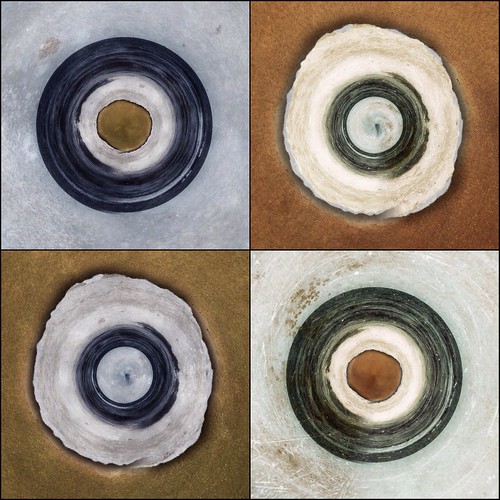 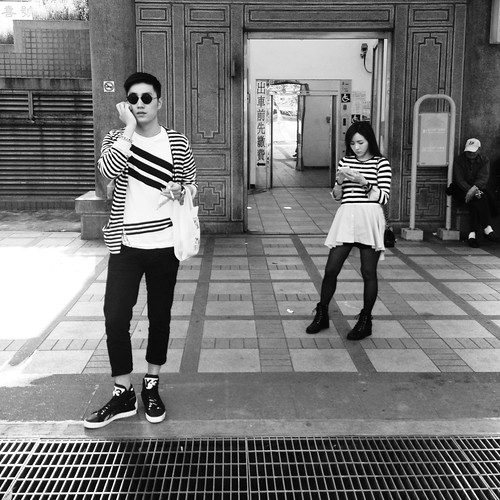 Tic-tac-toe in Taipei by Brendan Ó Sé
This was taken in Taipei, Taiwan. I was in a busy location in the centre of Taiwan looking for things to shoot when this area cleared of the passing crowds to reveal the three characters in the scene here. Photographic serendipity!
I used Snapseed to crop and convert to black and white. 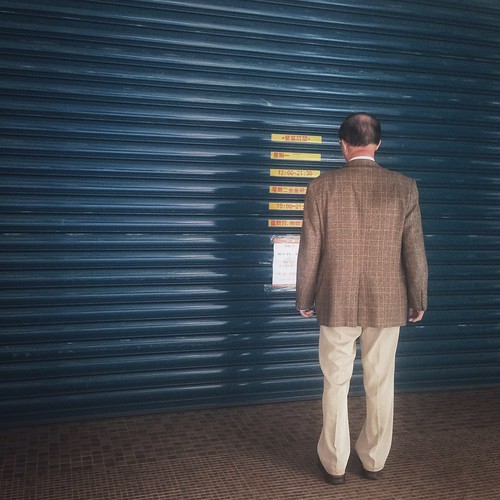 This was taken in Taipei, Taiwan. I was on my way back to my hotel when I came upon this gentleman who was standing still as he read a notice on the closed shutters of a shop. I was struck by his pose and rigidity and the shadow he cast on the shutters.
I used Snapseed to play with contrasts and to get the square crop.

Backstory: The majority of my iPhone tree/path images are captured along The Wheat Ridge Greenbelt in Colorado during my lunch break from work during the week. I shot this area quite a bit during the winter months and the plush summer version is hardly recognizable compared to the bare rawness of the cold, winter months. Lots of experimentation has resulted in the processing style I’m currently using, flowing brush stroke versions of a source image combined with the original, going for a painterly, hand drawn, fantasy kind of look. This shot was part of a rushed photo session of only 30 minutes, covering a fairly large area by foot, trying to capture as much as possible walking at a very brisk pace. The symmetrical look of Clear Creek on the right and the sunlit path on the left caught my eye on the way back to my car, one of the last shots I took during this particular outing. 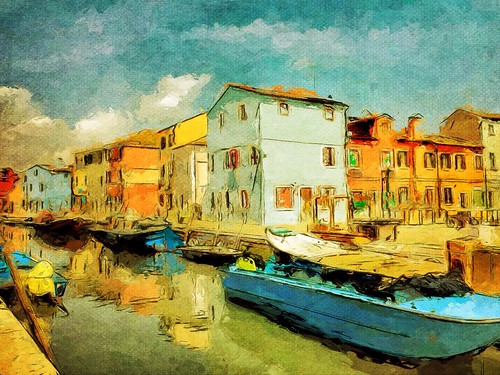 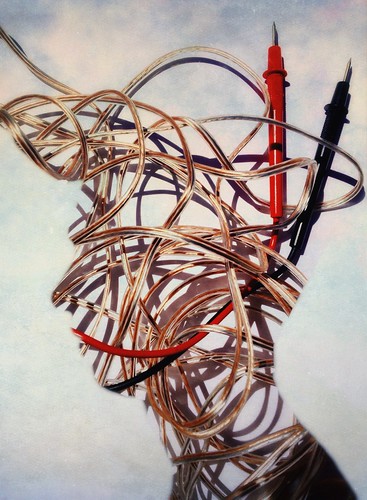 I have been having a great time doing these kind of double exposures lately. So one morning the idea of wires just popped in my head. I found some speaker wire laying around the garage, along with the red and black ones. I then laid them on a white piece of paper, posing them in various ways to get them just the way I wanted. After I finished I took a photo of my son and thumbed through all the shots I had. I then used the apps mentioned to get this effect. 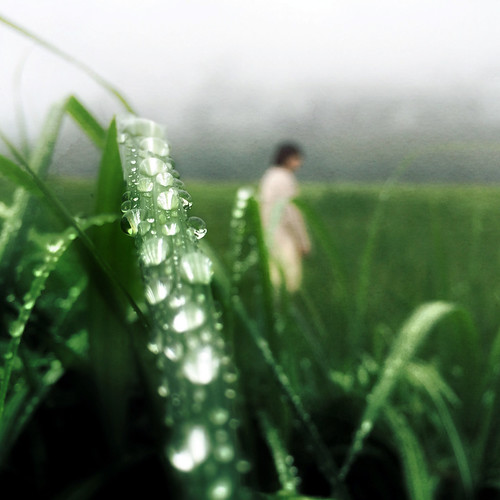 Nature after rain has a lot of very beautiful elements.
I was trying to focus iPhone native camera on water droplets shining in green leaf,
a friend of mine came in in the frame there, and became the background of the image.
Gentle light and background textures added in Photoforge2.
Various elements adjusted by Filterstorm.