I sincerely apologise for the late delivery of Apps Uncovered this week. Staff at iPhoneographyCentral this week have been extremely busy, with Bob Weil’s brilliant online iPhone Artistry course half-pricelaunch – (click here to catch it now before the price goes up!) and my filming debut for an iPhoneography pilot TV series..more on this later this year. So stepping into Bob Weil’s and my shoes, this weeks Apps Uncovered is chosen by our guest (and my dear real-life partner) Robert Snarey, in his words “an old school photographer who learned photography on steam powered camera’s sometime in the middle ages.” Thank you Robert and over to you…

Iphoneography and creating art on mobile devices can no longer be decried by purists, it is it’s own art form. I’ve enjoyed making my selection which was made mostly on an emotional connection.

My lead image is James Metcalf’s Fisherman’s Wharf who’s good abstraction with vibrant colours make this a stand-out image. I think James knew exactly where to stop and rightly ignored any urge to tidy up. I liked the graphic simplicity of Occhio Privato’s Vinyl, the colour tones and how it reminded me of my own emotional connection with vinyl. Giancarlo Beltrame’s The Choir Director has great energy and good tones, there’s good depth to this image, I want to know what is around corner. Rise Above by Michael Beresin is perhaps a odd choice for a traditional photographer especially as the composition is so uniform but I love the vibrancy and the fluttering that breaks up the image and gives it life.

Marginal Confusion by Mike Bowers made me smile, very playful but with menace. I love the expectant look on the woman’s face in Scott Woodward’s Rapunzel, I might have been tempted to make a close crop of the woman but this photos perspective works so well and capped nicely by the flash of colour at the top. A great portrait from Sara Augenbraun entitled Bike Rental/Repair Shop.

I love the grunge and the background that adds interest to the shot and suggests a story. A King Crimson T Shirt, the guy has great taste in music!

Back story: My wife and I were in Monterey Bay on vacation about a week ago. We like hiking along the Coastal Trail following the ocean. Its a nice path and not rugged. Temperature was in the 60s. We would often stop and I snapped this photo of Fisherman’s Wharf. I loved the colors in the buildings on the wharf and the ocean bay.

Later when we were back at the hotel, I loaded the photo into Snapseed on my iPad to brighten and add contrast. I saved the image and opened it in Repix. I love using Repix for the brushes effects. Chalk is my favorite. Its like pastels without the toxic chalk dust and mess. I also used the dot brush and hatching. There is an undo brush which lets me fine tune my effects until I am ready to save the image. When satisfied with the editing, I saved the image.

Now I have two images. The Repix image was a bit too soft. So I opened Superimpose (or blender), I don’t remember which, and loaded the two images, adjusting the opacity and I believe I used overlay blend (could be wrong about that). I saved the image.

The last step was to open the image in Procreate. Add my signature and several layers for brush and color work. Layers feature in Procreate is wonderful because you can turn them on and off add more layers, change opacity and application and then when finished export it out as a jpeg, PNG, PSD or Procreate’s native format.

Once saved, I start the process again with a new image. The apps I use the most are Snapseed, Repix, Superimpose and Procreate. Other apps I love include iColorama, Glaze, Modern Grunge, Union, ScratchCam and DistressedFX… the list goes on. 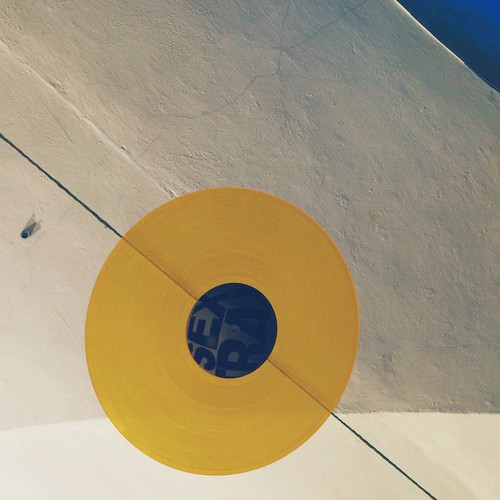 This shot was taken in an independent Italian record shop opened in the 1970s. The shop never stopped to sell vinyl records.

The colorful vinyl records used in the shop as objects of design bring to mind the abstract painting of the Italian painter, photographer, film director and scenographer Luigi Veronesi: 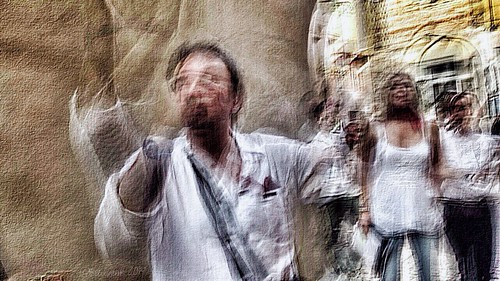 The Choir Director by Bobocinema 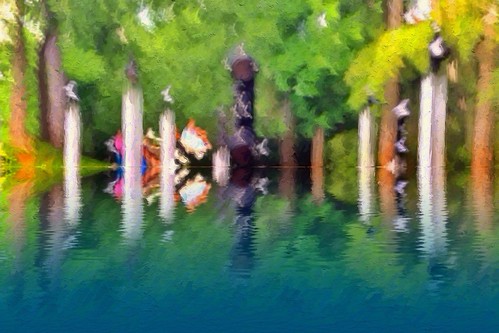 Rise above by Michael Beresin

I visited The Gardens at Dunbarton Oaks and came across what’s called the Lovers’ Lane Pool. I was mesmerized by the Zen like atmosphere and tried to capture the feeling wIth a wide angle. 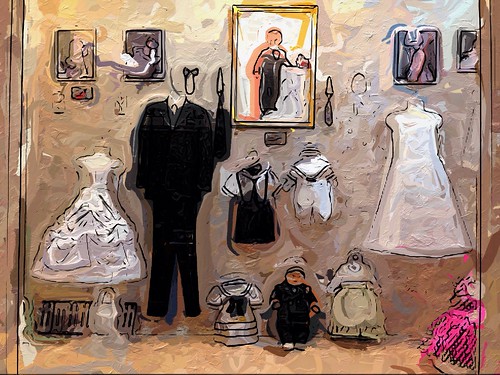 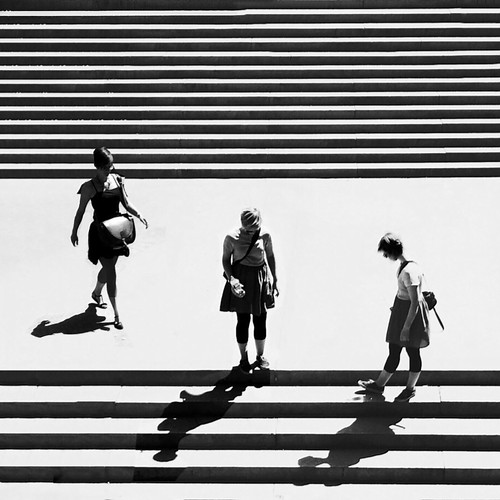 I began with a self-portrait taken in Photo Booth on my iPad, using the Stretch Filter. In Image Blender, I combined this with a photo of some vegetation. The result of that procedure I then opened in iColorama where I managed to give it that off white color, though I’m afraid I can’t remember how. I then loaded the original blended image underneath, and using one of the splatter brushes in Artist, under Brush, I masked selected areas. As is normally the case, I had no prior notion of what I was going to do, but simply responded to what was happening as I played and experimented. 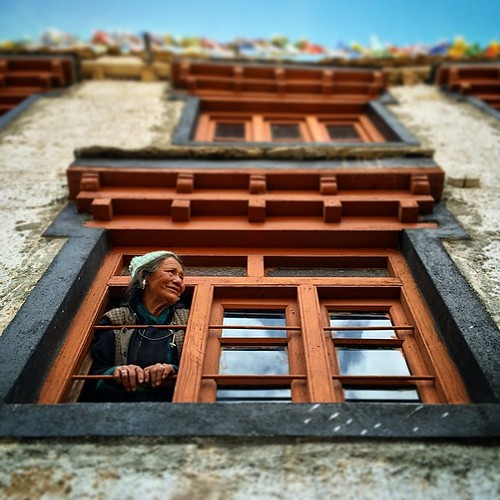 I made this photograph in the small village of Yangthang in Ladakh, India with my iPhone 5S. I processed the image first using PS Express and then added the Tilt-Shift effect when I uploaded the image to my Instagram account.

My creative partner and I spent two weeks in India shooting a documentary photography and film assignment. I captured this picture while our crew wandered through the narrow, dusty lanes of the tiny community shooting B-roll for the film. We came around a corner, looked up and saw this old woman perched in her window, gazing out towards the Himalayan Mountains in the distance. I snapped a few quick frames, smiled and said hello to the woman, and and moved on. It was a beautiful scene with the lady naturally framed inside her window and the prayer flags above floating in the breeze against the bright blue sky.

I call my photography style “Choose Your Own Adventure Photography”, after the books I used to read as a child. Literally and creatively, I can go one direction and discover a remarkable photographic opportunity; or I can go another direction and find something entirely different. It is this adventure that is the beauty of photography for me. To me, this picture articulates this philosophy perfectly. 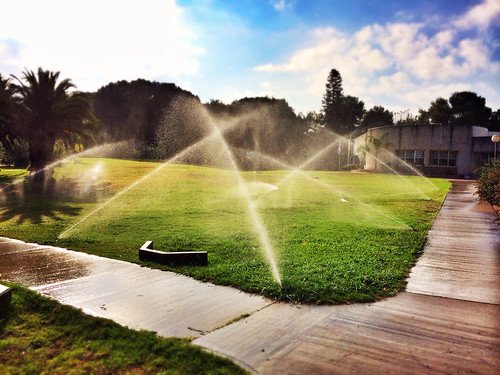 Water backlit always catches my attention,it is beautiful and all the water sprinklers together made for an interesting effect which I tried to capture. Separating focus and exposure areas was key for this frame. 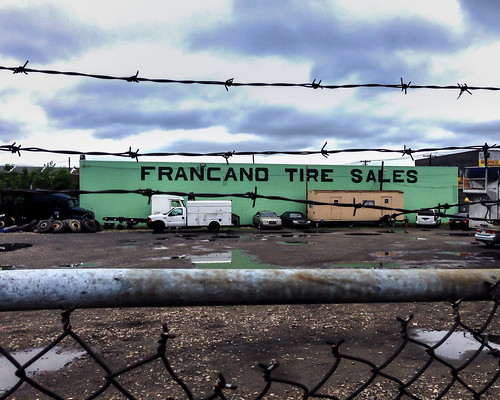 Just walking by and was struck by the bold typography. I used the barb wire to frame it for dramatic effect. The rainy weather added to the desolate look. Like to document old industry in my neighborhood. Just a bit of work to bring out the clouds and reduce noise in LightRoom. No other effects.

I purposely centered the barb wire though. Just a documentary shot. 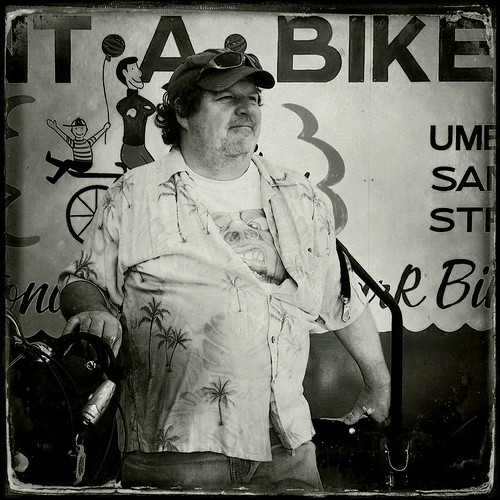 While wandering through Provincetown, MA with my iPhone5 in hand, I spotted this guy at the “Rent-A-Bike” shop on Commercial Street. I was immediately drawn to his stance against the shop’s sign, his hand on a bicycle, his sunglasses on top of a small cap on his head as well as the button shirt/t-shirt over his belly–But mostly by the Mona Lisa smile on his face. I took this image with my iPhone5 to quickly grab the shot of him. Right after, I went up to him and we talked about bikes, NYC and PTown, and asked if he minded that I had taken his photo (no, he did not mind!) Later on, I used Snapseed, Oggl and Jazz to turn the photo into BxW, add a Hipsta look and a nice tone with a cool border.

once upon a time by auketts

The shot was taken as I walked east into the sun along London’s Southbank of the River Thames. The group of boys on their way to school in white shirt uniform popped out of the bright sun as they walked under Blackfriars Bridge. I snapped as I walked. Reasonably low resolution, the bright sun and the motion giving a lack of sharpness all meant I didn’t need do any editing to give it some grungy graininess. I cropped in Snapseed and adjusted the mono effect in Noir.Shot with the native iPhone 5S camera, processed only with VSCOcam with G3 preset, slightly adjusted exposure, contrast, tint and saturation, cropped a bit.