Chilled and chilling were the the themes that floated to the surface during this week’s selections, with a crop of images that both feel cold and/or spooky,..to the bone!  Paul Yan’s ghostly and magical Arhats and Sāmaneras image rose to the top of the picks stealing the lead position n this week’s Apps Uncovered!

As a thank you to all of you who have supported my work over the past year, in 2019 I am giving some of my “stuff” (prints, iPhone gear and more…) away to randomly chosen iPhoneographyCentral subscribers. 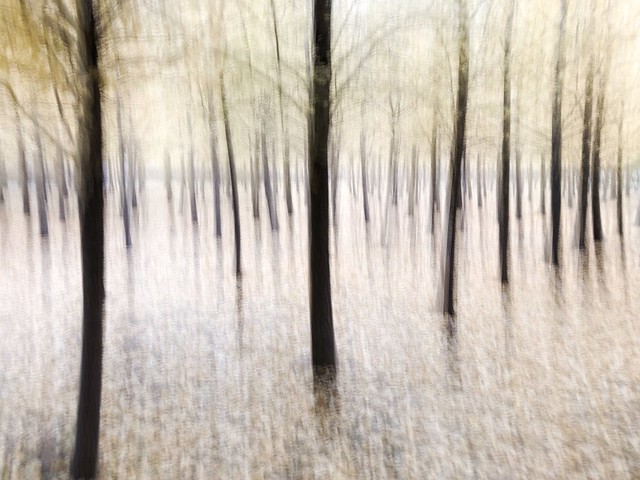 “Arhats and Sāmaneras” by Paul Yan

Early morning in November. Took a walk in a park. The slender trees that were forsaking their leaves reminded me of Arhats and Sāmaneras (the enlightened elders and the novice mendicants) in the Buddhist tradition — those who forsake their clinging, aversion, confusion and practice their way to awakening and emancipation taught by Gotama Sidhhattha, aka Shakyamuni Buddha.

This 3.4-second exposure was made with the Slow Shutter Cam app in Motion Blur + Bulb mode. After focus-locking on the foreground tree, I slowly panned the phone upward to get the vertical blur effect. Mild post-processing was done with Snapseed. 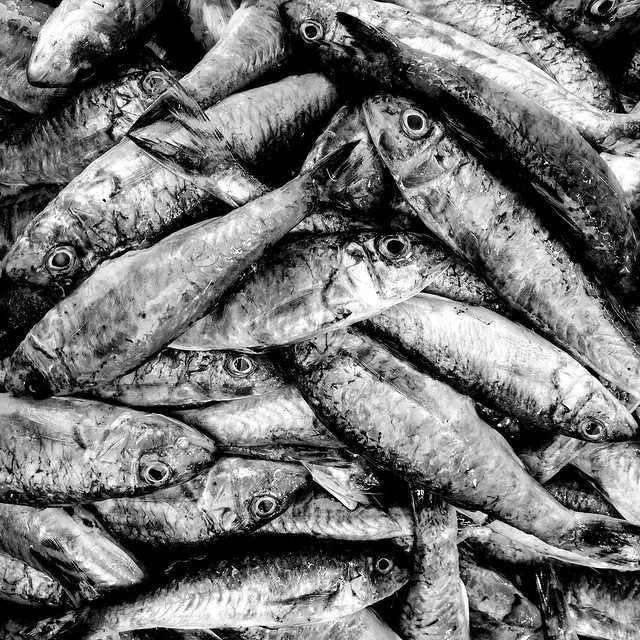 “You can check out any time you like, but you can never leave” by Paul Yan

Apps Used: Phone: iPone X
Camera app: ProCamera
Post-processor: Snapseed
Backstory: Sāmsara is a never-ending cycle of birth, ageing, illness and death of all beings, especially the sentient ones. Like fish, we can die any time, but we can never leave Samāra. The only way out is to practice and train to be truly awake and see how things and lives really happen. 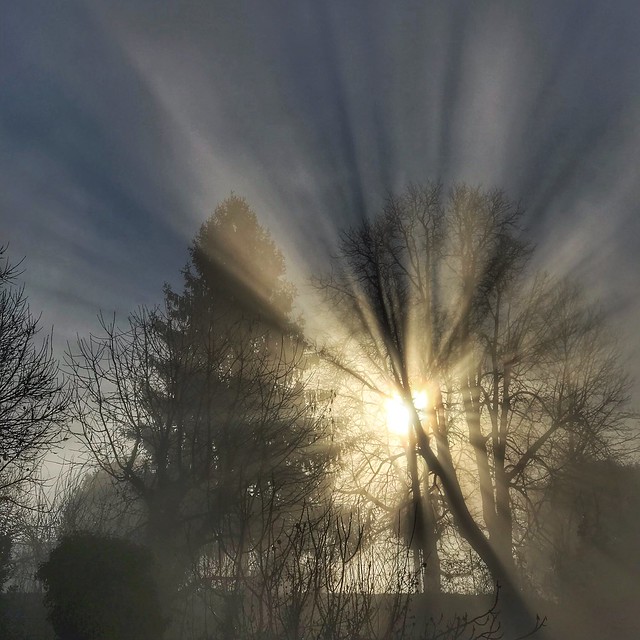 Inside views by Tomaso Belloni
App used : I shot with the default camera app on an iPhone 7plus and edited with Snapseed.
Backstory: When the low sun started shining through the fog I grabbed my phone and ran out in the park. I shot seventy photos in a few minutes. This is the most spectacular. . 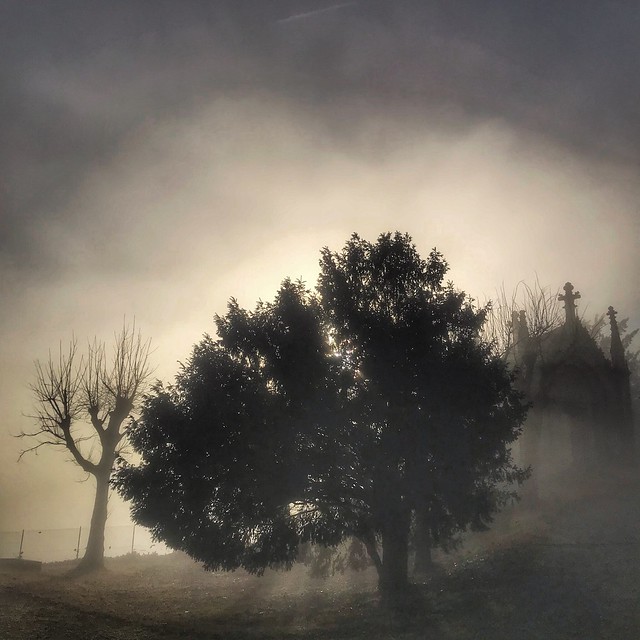 On the wrong foot by Tomaso Belloni
Apps used: I shot with the default camera app on an iPhone 7plus and edited with Snapseed.
Backstory: Another shot in the mist. The sun is trying to get through behind the tree in the middle. The apparent curvature is not a fish-eye effect, but a real bend in the path. Very creepy. 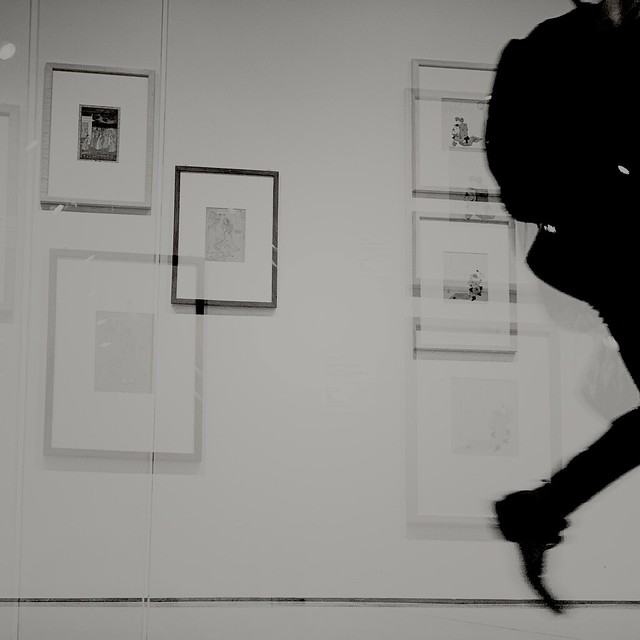 Backstory: The weekly task for the Hipsta365 group on Facebook was to use the Arjan film with any lens. I find the Arjan film difficult to use, but this combination with the motion of the person walking by was serendipity. I did no post-processing. 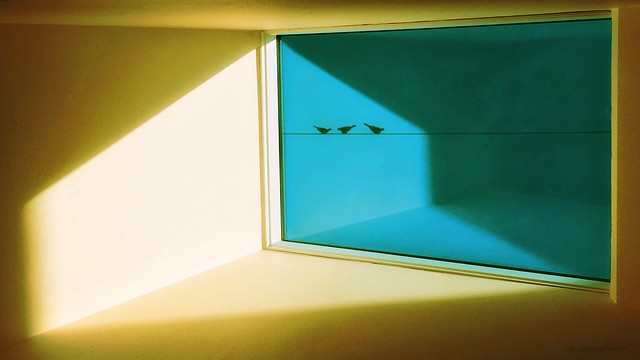 Backstory: This is the skylight above the treatment table at my acupuncturist’s office. I’ve been looking at it regularly for years. When I was there a couple weeks ago, we were having one of the first sunny days in what felt like weeks of overcast and rain. The light was so beautiful coming through as were the clouds drifting by. The geometry of the shadows also gave the impression that there was a room on the other side of the skylight. When my treatment was over, I took a photo.

I first cleaned up the image using Pixelmator and Snapseed. Into Skylab next for the birds, then Hipstamatic and Mextures to get the colors just right and emphasize the shadows, then back into Pixelmator for a bit of softening and blending.

The original photo gave me a feeling of being in a science fiction story where a room exists on another plane of existence. It felt like a place of memory and/or creation. There are four stories in this series with a tree, a cloud, a person and these three birds. As I placed the images into the space beyond the glass, my thoughts drifted to what those things might mean. What’s happening on our planet with pollution, overpopulation, unconscious and unchecked consumerism and changes in climate and environment may bring an end to life as we have known it. With the destruction of the natural world, the image with the tree became “a memory of trees”. The one with the cloud became “cloud illusion”, a reflection of what was and also symbolic of how human perceptions and beliefs can be projections like seeing figures in the clouds. A human-like being walking into “the room” could either be the last human or the beginning of another chance. The birds on a line became symbolic of hope that nature might regenerate and home recreated. 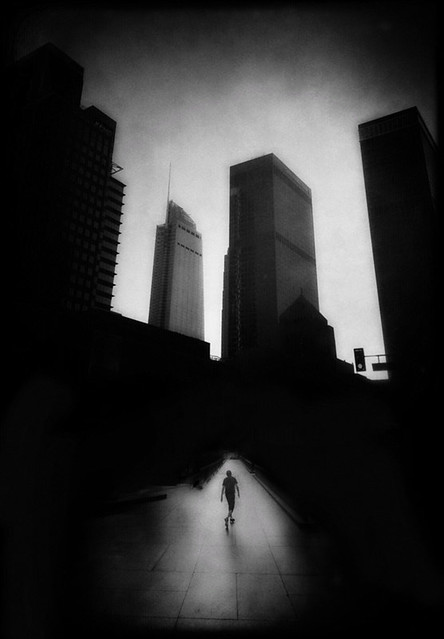 The Last Glimmer by David Ingraham
Apps used: Shot with Hipstamatic, processed in Snapseed, Diptic and DFT (used to be Tiffen’s PhotoFX, and unfortunately it isn’t available anymore.)

Backstory: I was struggling to get the entire original scene into the frame the way I wanted it, so I combined two different images using Diptic —the skyscrapers being one shot and the person below from a different shot. By combing and blending the two, I was able to create an image more along the lines of what I’d seen in my mind’s eye. 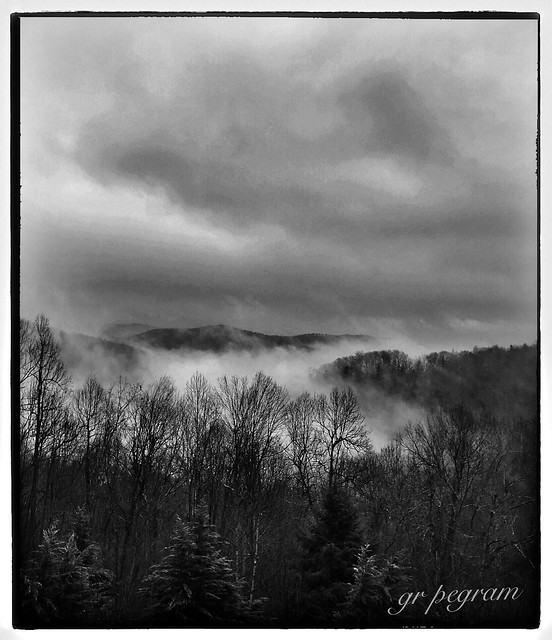 Apps used: Photo taken with Jag.gr 6×7 in the monochrome mode, edited with Snapseed and watermarked with iwatermark app.

Backstory: Western North Carolina Mountains, an early winter view from my back porch. Using my favorite app the Jag.gr 6×7 in the monochrome mode. This photo app has a “Tif” save option as well as the normal high quality Jpeg. I chose the Tif and it rendered a 12 mb image. Too large for Snapseed, it was automatically converted to a standard Jpeg. That said, the Tif save is subjectively better even after the conversion. HDR was added in Snapeed as well as the frame. Watermarked in iwatermark. Jag.gr highly recommended, featuring a more elaborate 645 version, as well. 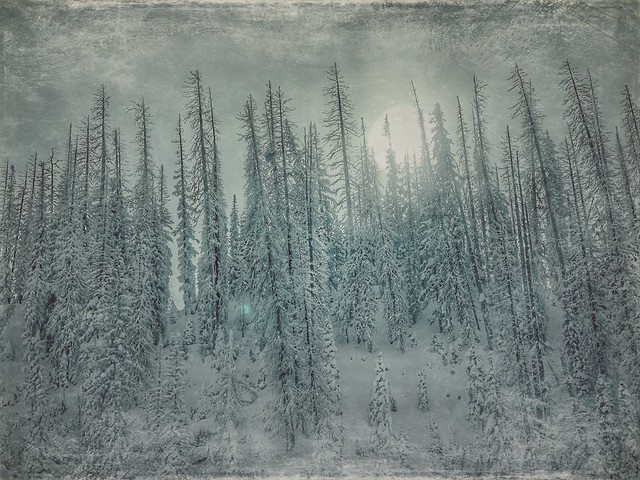 Backstory: My husband and I were traveling around southern Colorado and had to drive over Wolf Creek Pass after a snow storm. The roads weren’t great and the hillsides looked quite eerie. The snow is covering pines that died from the pine beetle infestation which is killing millions of trees in the west. I shot this at the top of the pass from the car. 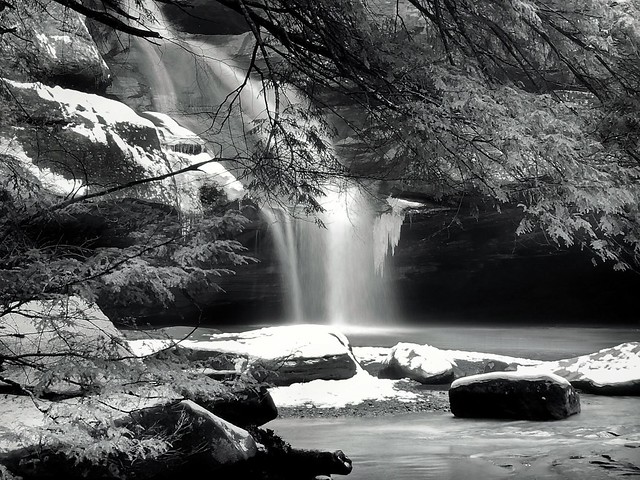 Apps Used: Hydra – Use as a camera replacement and for its hi-res setting. Darkroom – Perfect for desaturating the image, using the RGB curve for shadow and highlight control, and using the HSL sliders for color management.  Also overall basic settings for adjusting temperature and sharpness.    Snapseed – Used for ambiance adjustment and its brushes for adjusting dodge and burn. Deep Crop – for its AI cropping features.

Backstory: Hocking Hills State Park is our sanctuary for hiking, relaxing, and taking in nature. This State forest provides some of the most beautiful scenery imaginable. From waterfalls to spectacular rock formations, Hocking Hills does not disappoint the photographer.

We recently made our winter visit to the Park. One of our favorite waterfall hikes is to Cedar Falls. This waterfall provides a splendid view in the winter with its ice formations and water flow. This year was a mix of freezing and thawing within a few days. The falls were powerful, yet the hemlocks and ice provided a soothing frame. I used my iPhone trying to centralize the falls while including the surroundings.

I love long exposure when photographing waterfalls. It gives them a silky characteristic while preserving their powerful drop. I chose shooting the scene in color but desaturating to black and white during editing. This method provides more control over highlights and contrast in the scene. We are very lucky to have forest parks near our home to get away for a while, meeting friends both new and old. Always carry your iPhone with you to take home a part of nature and preserve a memory.

Apps Used: This portrait came to me from an online website Sktchy which features copyright free images to artists. Editing was done in iColorama and Snapseed.
Backstory: Backstory: The graffiti texture is from my original photograph of graffiti I shot with my iPhone in Europe. I use my iPadPro and Apple Pencil for editing. Butterflies are from a brush in iColorama.
This image represents to me the duality of living a hardened city life with the sweet sensitive longings that harbor deep within. ithin. 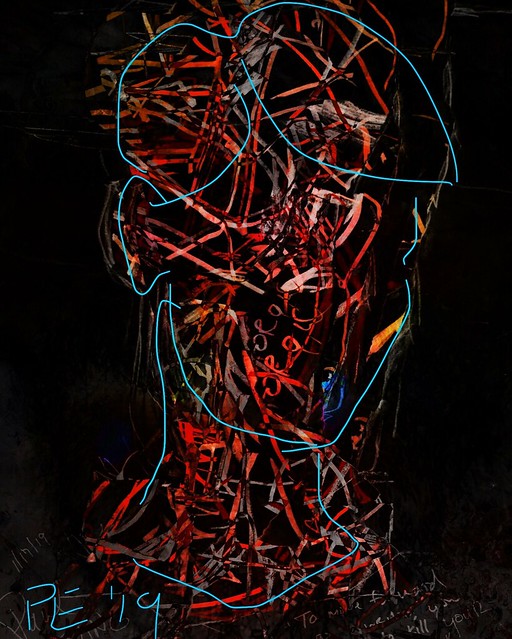 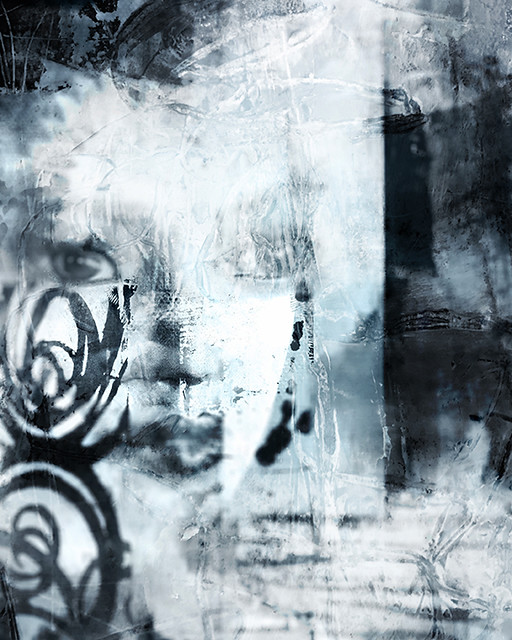