Welcome to this week’s Apps Uncovered gallery of black and white beauties (and some with just a hint of colour).

Big thanks to Nigel Reader for our feature image this week. His elegantly composed stair rail shadows sit beautifully with the circular wall element contained within a brittle frame. Poetically entitled “The Pit and the Pendulum” one wonders whether, given time, where those stairs might take you whilst the pendulum swings. Great work! Thank you Nigel for submitting your work to iPhoneographyCentral’s Flickr group. 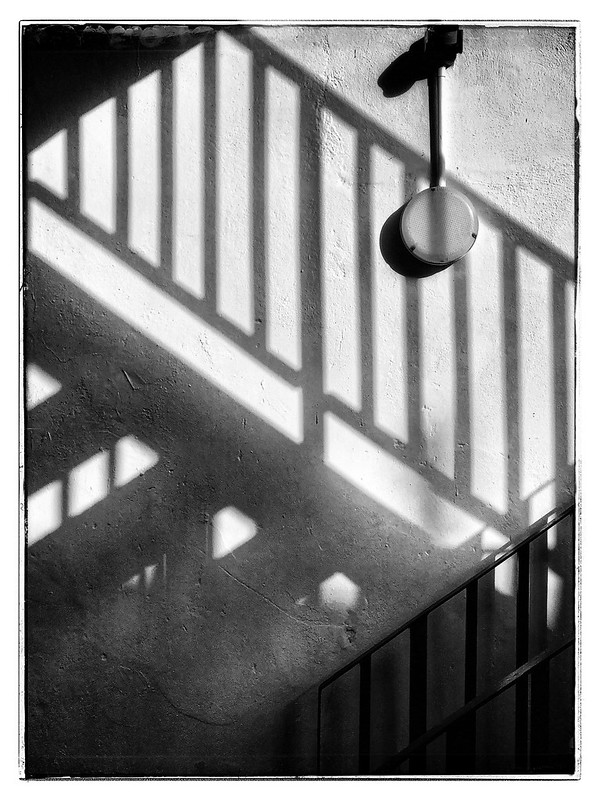 The Pit and the Pendulum by Nigel Reader
Apps used: Shot on an iPhone 8 Plus and processed in Snapseed using HDR to bring out a bit of texture in the wall and other tools to refine the contrast and perspective

Backstory: I had a few minutes to fill whilst other family members were busy in town so decided to try and find some pictures. This shadow arrangement caught my eye almost immediately. It was the result of low sun on an external staircase and either an alarm or light. Later at home I realised that a closer crop emphasised the descent down stairs, with the shadow adding perhaps a sinister element. The alarm or light, with shadow addition, resembled a moving pendulum – hence the title. 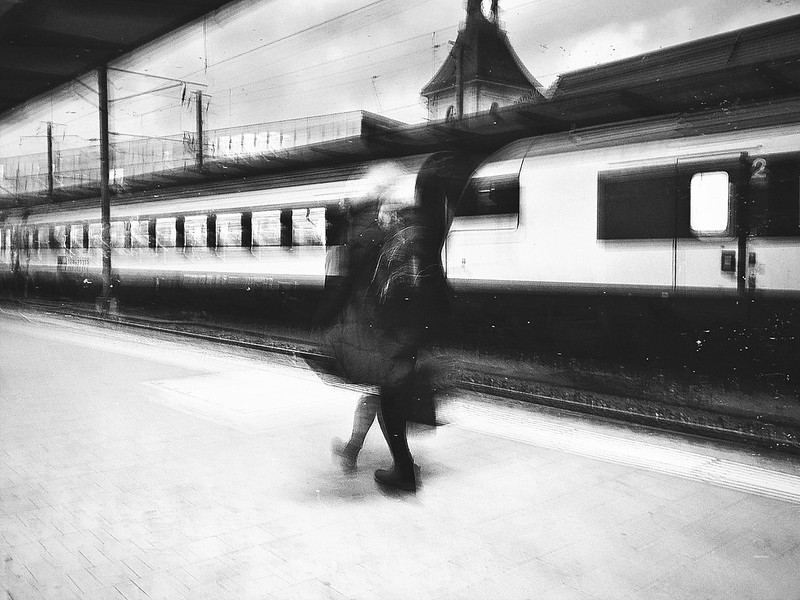 3-2-2020 by lila_lile
Apps used: Bluristic Pan&Track app, Hipstamatic
Backstory: at the train station, arrival and departure are shaking hands. So there is space to go new path with hope and optimism 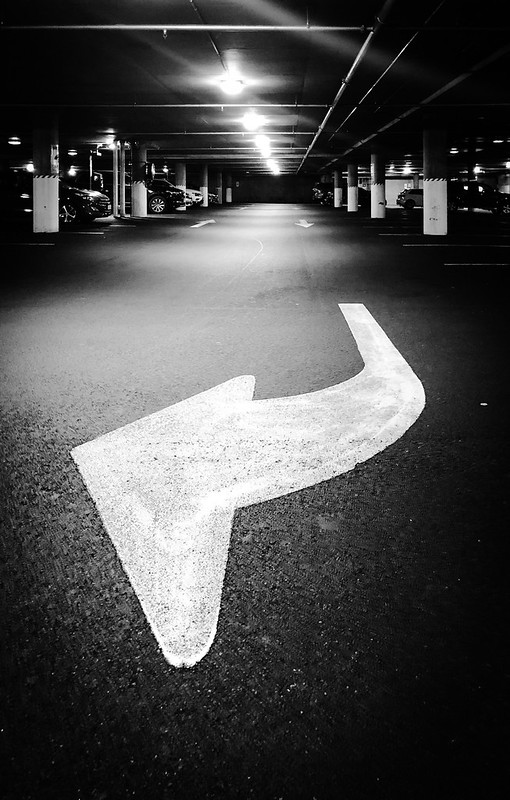 The other way by Keith Midson
Apps used: I took the photo using my iPhone 8 Plus and processed it using PhotoShop Express on my phone. I used B&W presets with some minor tweaking of settings.

Backstory: I took this photo on the way back to my car after having lunch with my family. The arrow and lighting caught my eye. 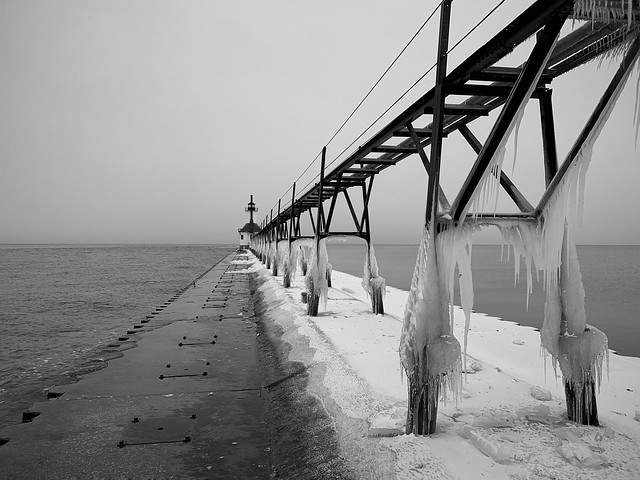 Apps used: I shot this using my iPhone XR using the ProCamera App. The image was then edited on my iPad using the Carbon app. I used the Moscow filter preset and then edited the highlights and shadows with a slight vignette to finish it off.  Backstory: I work close to this pier and like to walk there each day during my lunch hour. The day prior to this, the winds were strong and the waves were crashing and splashing over the pier so it was not possible to walk on it. Overnight, the cold temperatures led to the formation of the ice building up on the structure of the elevated walkways. On this particular day, the weather was mild so I was able to walk out a good distance to take this photo. I tried to show the contrast between the ice and the black metal supports leading out to the lighthouse.

As this has been a mild winter, the next day the temperatures warmed and the ice stated melting and falling off of the supports and onto the pier. 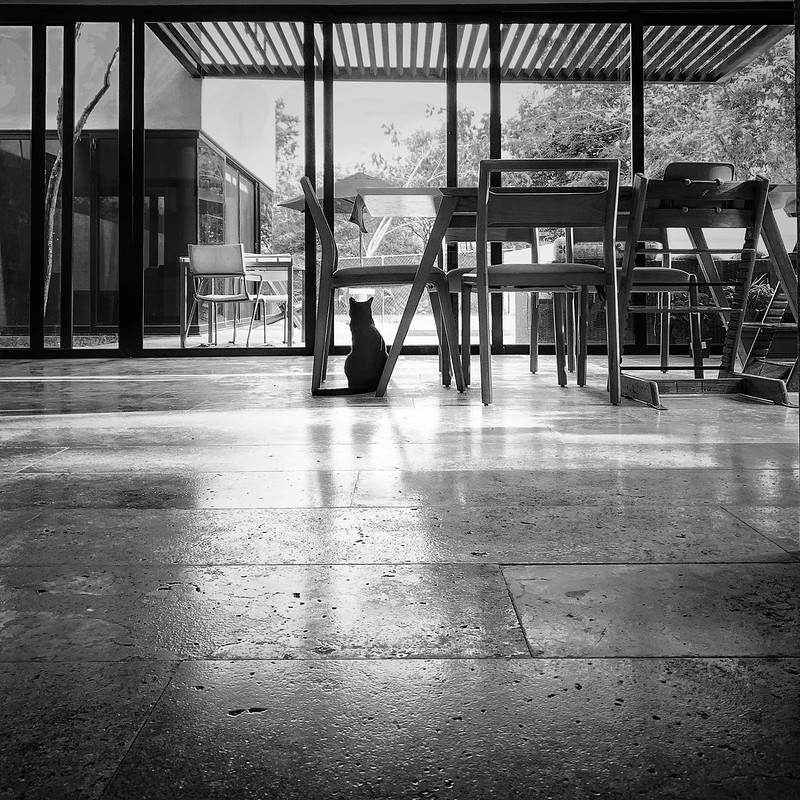 Apps used: For post-processing in black and white I love Snapseed, the TOOLS “black and white” “image perfectioning” and “vintage” work together very well for a nice black and white image.
Backstory: This is the dining room at my home, the sunlight enters at an indirect form, so it gives nices illumination. My blue Russian cat was sitting under the chair and the marble floor was shining, so it gives an excellent contrast. I laid on the floor an turn upside down the iPhone so the camera was near the floor and could give more details of the textures of the floor, but this time no shallow depth of field. I thought that a square format was more appropriate for this scene 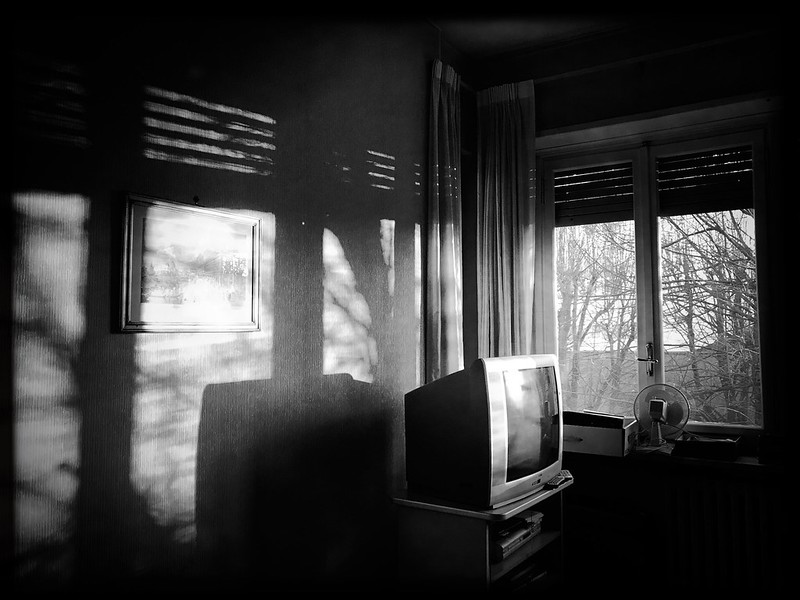 Reflecting by Cristina Rossi
Apps used: I took the picture (tv scene) with my iPhone7 camera, then I processed it trough Hipstamatic with John S lens and Blackeys Supergrain film.

Backstory: I noticed the shadows of the trees on the wall of this deceased person apartment, and I couldn’t help it but taking out my phone and snap. The old tv reminded me of a 80s song by Italian singer Linda Di Franco called “Tv scene”, and I think it sums up the melancholy of an empty house which is being dismantled. 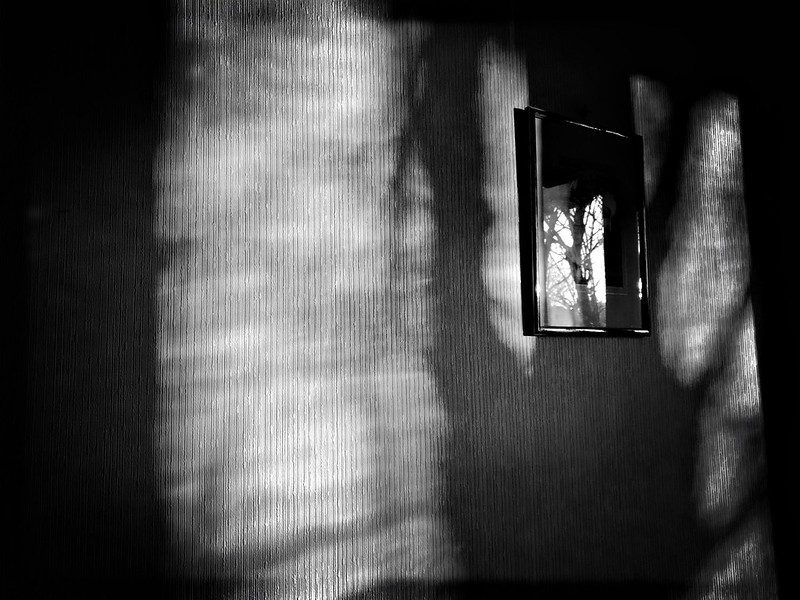 Reflecting by Cristina Rossi
Apps used: I took this picture (Reflecting) with my iPhone7 camera, then I processed it trough Hipstamatic with John S lens and Aristotle film. 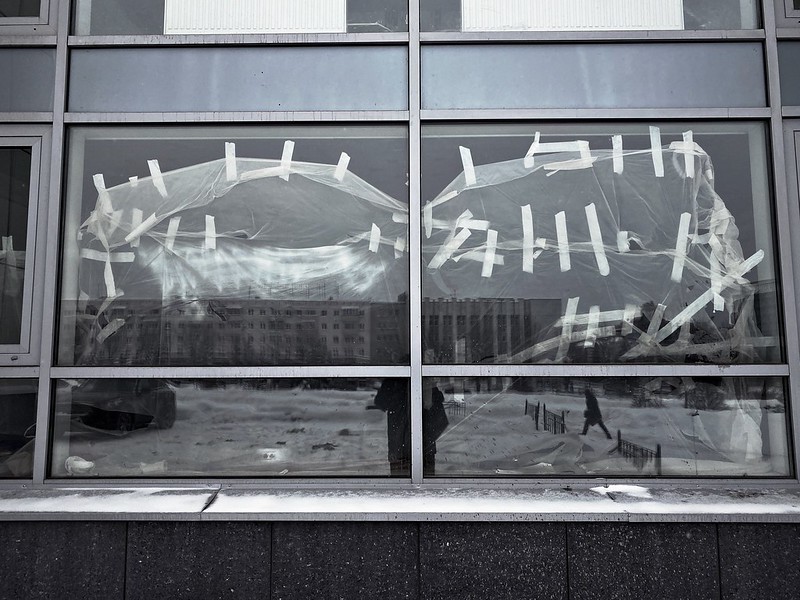 Apps used: Shot on a standard camera iPhone 11 and processed in Hipstamatic (applied “The Photojournalism SnapPak”).
Backstory: Walking once again through the streets of the city, I noticed this window from afar. I liked the window randomly pasted with adhesive tape lines and the film behind the glass gave some ghostly mystery. I could not pass by and not take a picture. 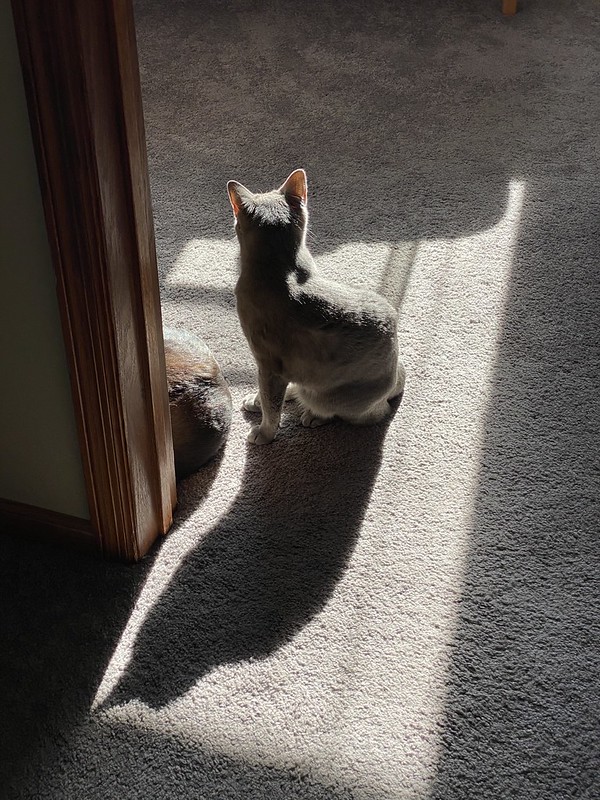 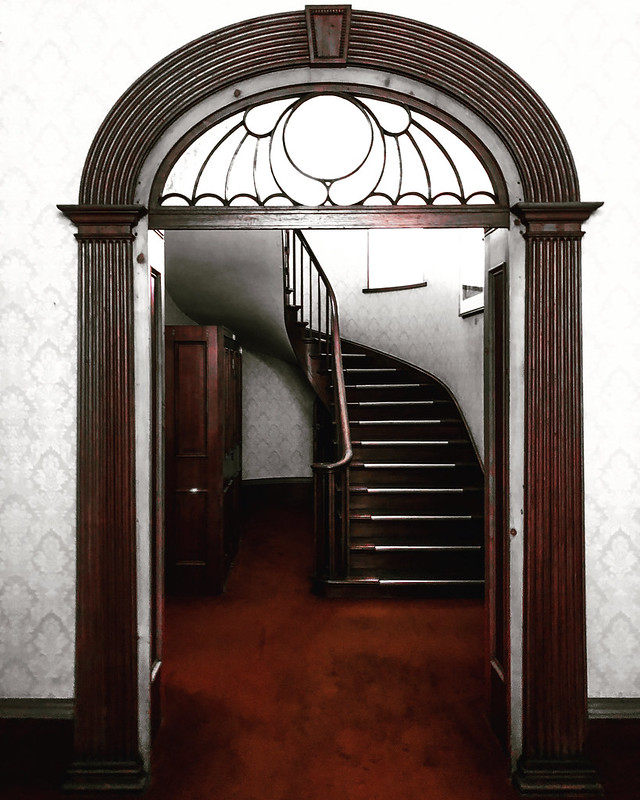 Deco by Keith Midson
Apps used: The image was taken using an iPhone 8P – I used Photoshop Express to process the image.  Firstly to ensure that the alignment of the doorframe and stairs was adjusted, then I used the Photoshop filters in the processing.

Backstory: I had a meeting in an old building in the CBD.  I am always fascinated by the staircase of this building and I always stop to try and capture some interesting photos of it when I am there.  This was the first time I photographed the stairs from behind the arch – most of my images are from the staircase itself. 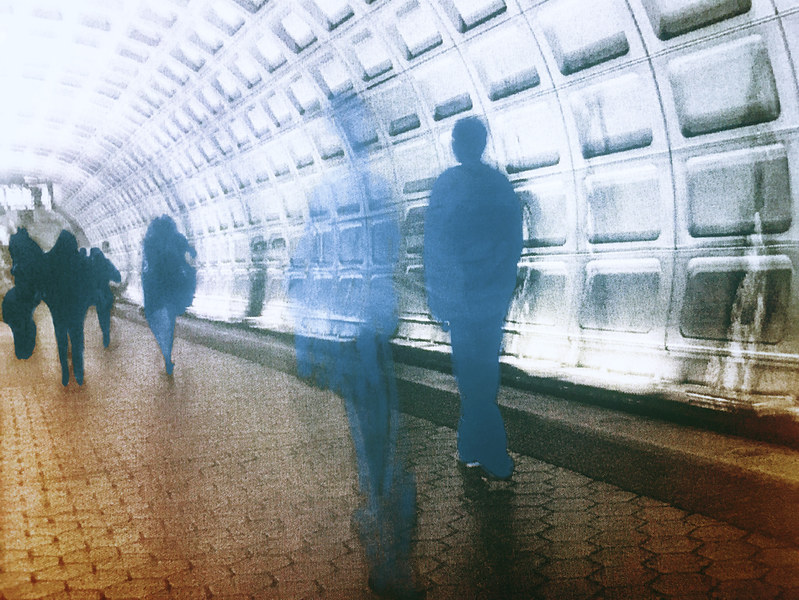 Apps used: Snapseed and Procreate.
Backstory: This photo was shot in the Washington, DC Metro in the summer of 2017. It didn’t turn out that great, but rather than delete it, I decided to play with it and see what happens. I used Snapseed to convert it to B&W and clean it up a bit, then hand colored it using Procreate. I like the results, the blue figures have a ghostly feel to me and makes it feel a little spooky. 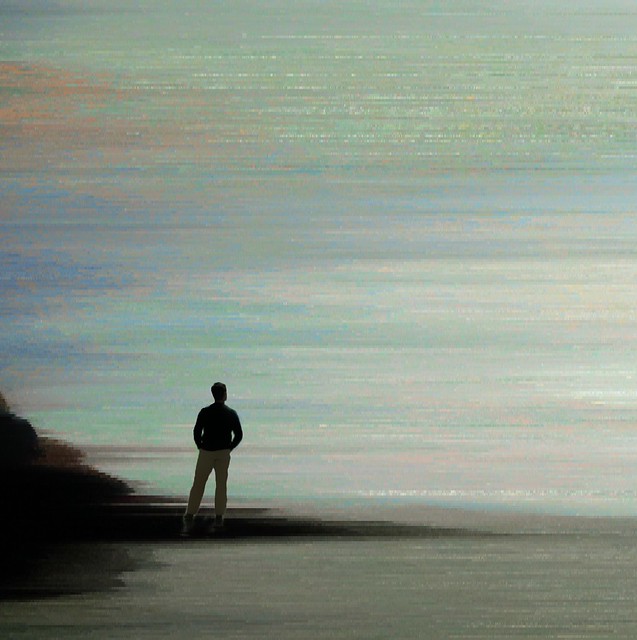 Attendre le printemps by pahamel-mtl
Apps used: IPhone, Decim8,Superimpose X and TouchRetouch.
Backstory: The overwhelming whiteness of winter leaves many hankering for shades of green. I am one of them. The two photos were taken at the Imagine Van Gogh exhibition, an immersive exhibition where people stroll among various animated photos of the painter’s works. It is the ideal setting for capturing silhouettes. An enlarged detail of a canvas was processed with Decim8 to create an imaginary springtime landscape. The resized silhouette was integrated into this image with SuperimposeX and edited with TouchRetouch. The character stands in a contrapposto, suggesting that this landscape inspires in him a certain awe or contentment.