In 2007 I started using my dumb phone to take photos. They were reference photos for paintings or reminders of a location to once again return so as to take a proper photograph. Never would I have imagined I would utilize my phone as my main camera, paint , build collages, as well as occasionally answer a call.

I started to compile an album called: cellular interventions. (Title to be considered as a play on words.)

I am not sure of the extent mobile photographers and artist prefigure the future of art, I do know the following feature, as well as preceding ones serve as examples of the skills and vision of this genre.

Please do take a look at the contributors galleries. You will not be disappointed.

I am leading this feature with the beautiful work created by Oola Christina. The tones and ethereal nature of it are a gentle and warm invite contrasting the chaos of these days. It radiates grace and serenity, something the world needs so desperately.  It is also a fine example of what harmony can be accomplished with differences working together. It, as well as the 2 that follow, are collaborative works.

Thank you all for contributing your wonderful images and we look forward to discovering the stories and techniques behind them. 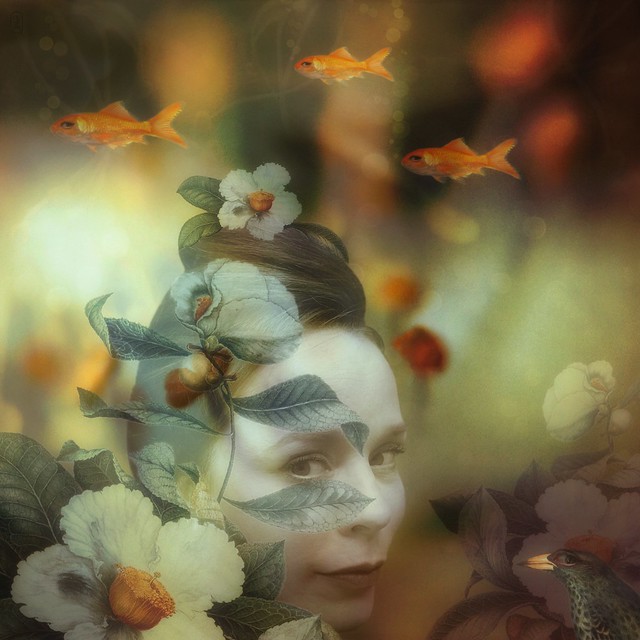 Oola cristina
“between layers of light”

Backstory: This image is a collaboration with Ile Mont for the Portrait of an Artist series of The AppWhisperer. Ile sent some photos of herself from which to choose to create a portrait in my style. I knew right away how I wanted the image to feel though it took a couple weeks before I did anything other than create a layer mask of her image and change it to black and white. Then one evening, it all came together. I used Leonardo to layer four macro photos: three of plum blossoms and one of the top of the bristles of a shaving brush. Each of those images had a good amount of light and shallow depth of field. In between those layers, I added Ile’s image, the fish, the botanicals and the bird. Smoothed out the edges and blended in Pixelmator; put bubbles in with Procreate; then, played around with filters in Snapseed and Hipstamatic until I found ones that added the depth, contrast and richness that accentuated the feeling I was hoping for. 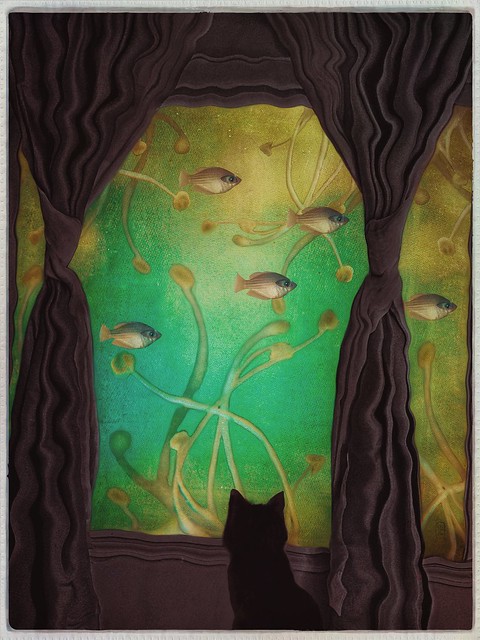 Backstory: This image is a collaboration with Jo Sullivan for a group challenge in NEM Surreal. Jo offered four images from which to choose to transform in whatever way we wanted. I chose a black and white shot of a window with curtains facing out to the street. The window and curtains set the stage for just about anything. I love images of fish and the hint at being partially underwater, so, many of the composites I’ve done have these elements. I started with a background created with filters in Afterlight. Then, used Leonardo to layer in fish and the tendril-like centers of dried plum blossoms. The black cat (from PhotoCrash2) added to the scene’s point of view. I took the image into Pixelmator to smooth the edges, tweak and blend; used Snapseed to add a bit of smoothness and glow; then Hipstamatic to see what combination of filters might appeal. I sent it through HM three times to get these colors, add to the texture, and for the frame. It still needed something after that, so took it back into Pixelmator to add the wiggly watery warped-ness to the curtains and wall. 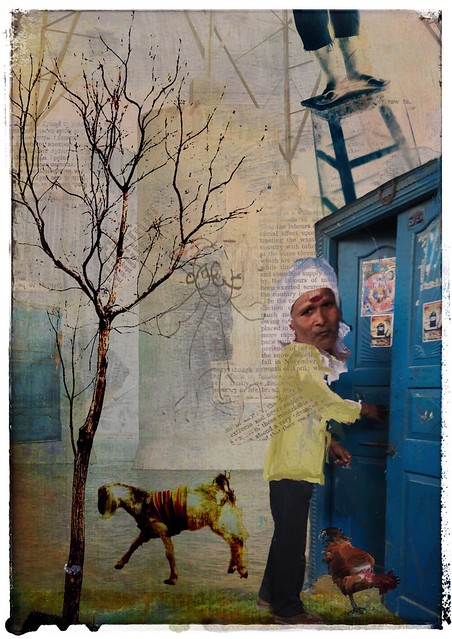 This piece was created for a collaboration challenge. In this case I asked Laurie Amerson to collaborate with me and she supplied me with photographic material. I then used Procreate on my Iphone8 Plus to generate this collage, adding my own textures and finishing up in Snapseed. 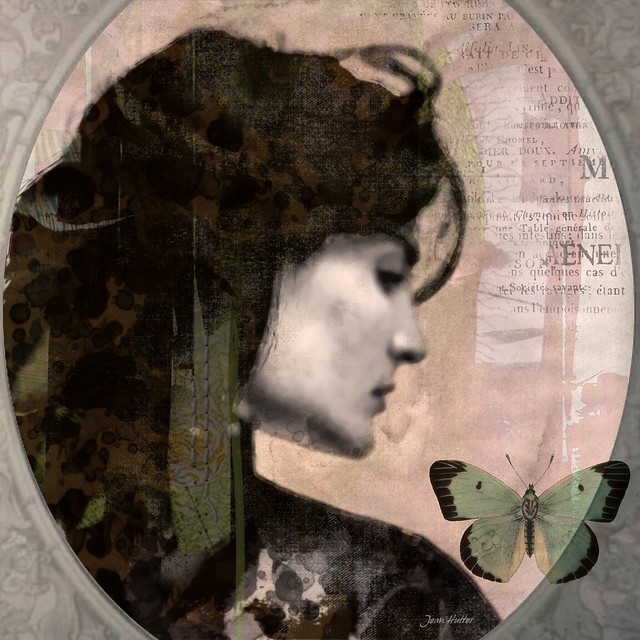 This was a quick photo that was very blurry but for my type of work works great. I have made 2 images from it so far. Never dismiss a not so great photo.

This image was shot with Hipstamatic, processed in Snapseed, with final toning and texture added with PhotoCopier app.

This was a rare case of pre-visualizing the image beforehand: I’d pictured this image, or something of the sort, in my mind’s eye before shooting. I knew if I headed DTLA to Disney Hall on a rainy day, I could capture something with this kind of mood and aesthetic, all I needed was the right people to step into the scene at the right time. (If only it were always that easy!) 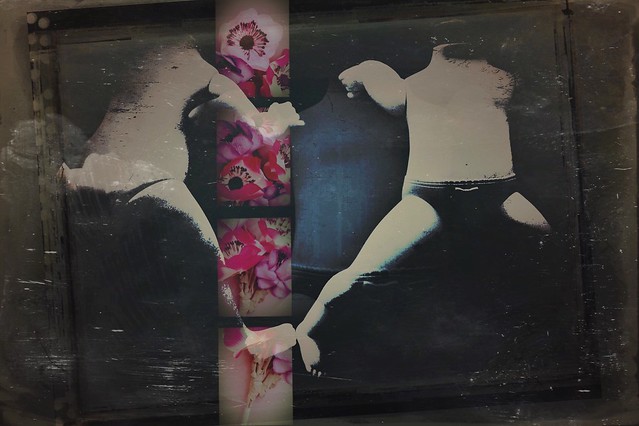 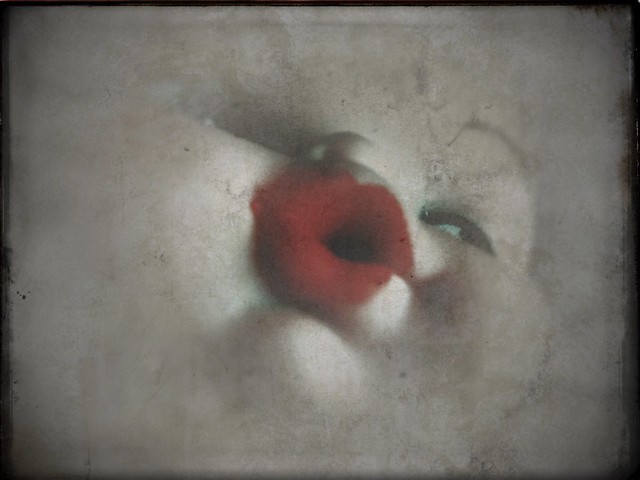 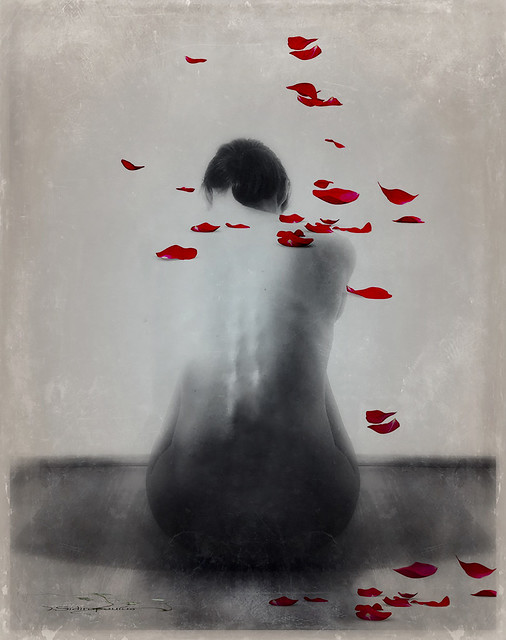 It’s always an honor to be featured to your web site … So about my photo , the million little pieces is inspired from the placebo song “same tittle” .. i used pro camera for the shot … then Snapseed to adjust the light stackable for adding filter and then blender to add those million petals on her like they were her feelings her dreams that were falling apart thank you so much for the opportunity to be a part of your awesome project once more

… to purchase my artwork please check the link here www.society6.com/devine1225aaa

I shot the reflection of these trees because I liked they way they huddled together. I cropped the image and made some general adjustments in snapseed, The rather busy and distracting surroundings were blended with the chalk in repix. distressedfx brought the image together. I lightened the area around the trees to separate them from the background a little more. I wanted a little bit of colour in the image and placed some specks on a transparent layer in artstudiopro and saved the specks as a png, which I imported into procreate, placed them on top of the trees. next I added a new layer with a goldleaf overlay, I had downloaded from the internet, and turned this into a clipping mask, giving the effect of golden leaves in the trees 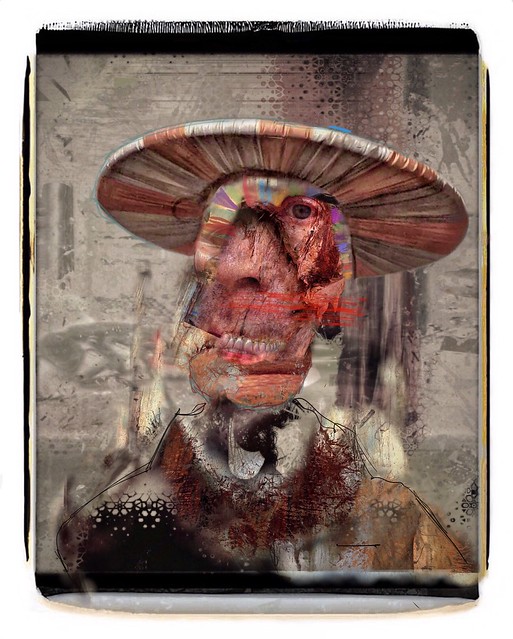 Apps Used: Native Camera, Image Blender, iColorama, Procreate.
Backstory: This image has been sitting in my files for several years waiting for me to decide how to handle it. I recently completely reworked the face and head using elements from that time. That’s one of the things I like about allowing images to linger about, I usually find my way to unexpected destinations. 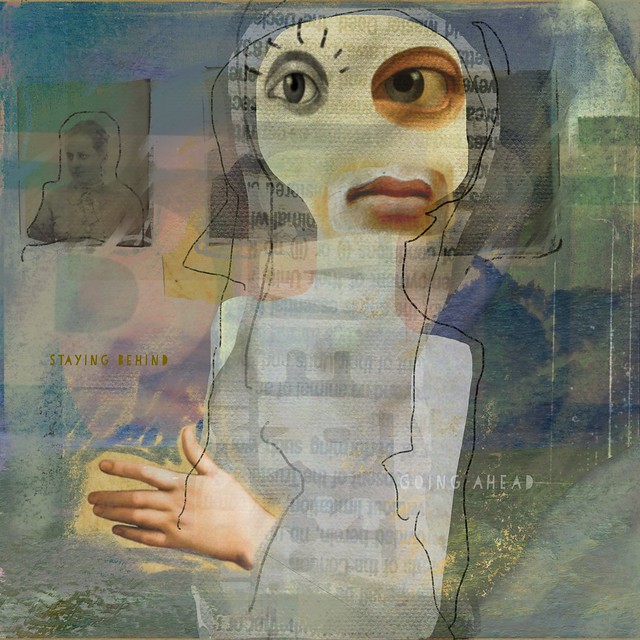 The apps used in this piece were Native Camera, Procreate, Mixerpiece and Over. I have been involved with making portraits for quite some time always starting with a photographic portrait. Here I decided to generate the entire image on my iPad. I used a combination of layering and drawing techniques and the camera to photograph textures and layers. 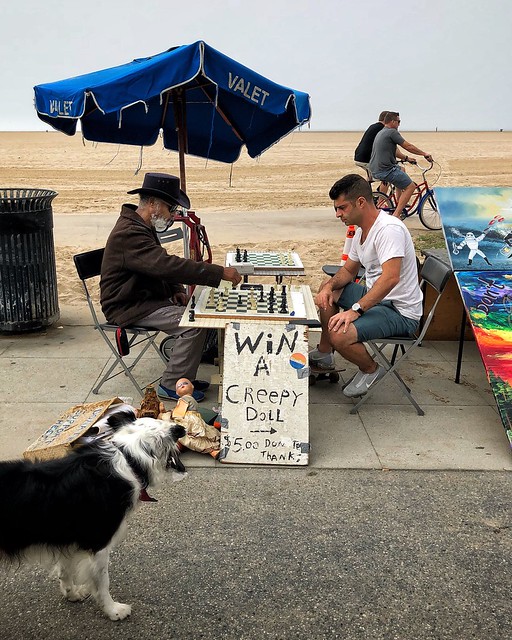 I recently spent several days in LA and decided stroll the Venice and Santa Monica boardwalk. So many interesting people, many who are homeless, so it’s touched with sadness. These two gentlemen were interesting enough for me to snap a few photos with my IPhone X using the native iPhone camera app and edited with Snapseed. 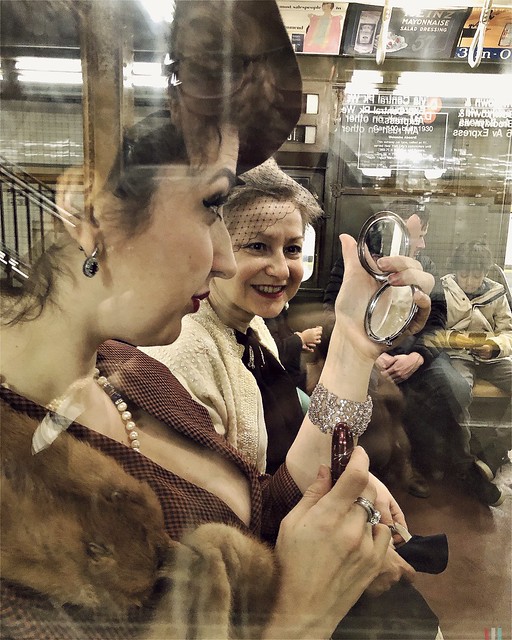 This is an event that takes place every year in NYC during the holidays,

It is a tradition for NYC TO PUT THIS VINTAGE TRAIN, 1930″s

R1-9, in regular service between Thanksgiving and New Year’s

It is a chance to travel through time

People dresses up in vintage clothing, to be photographed or just to have fun.

It is exiting time to meet friends and bring family member to share this moment, to me means to shoot and create moments . 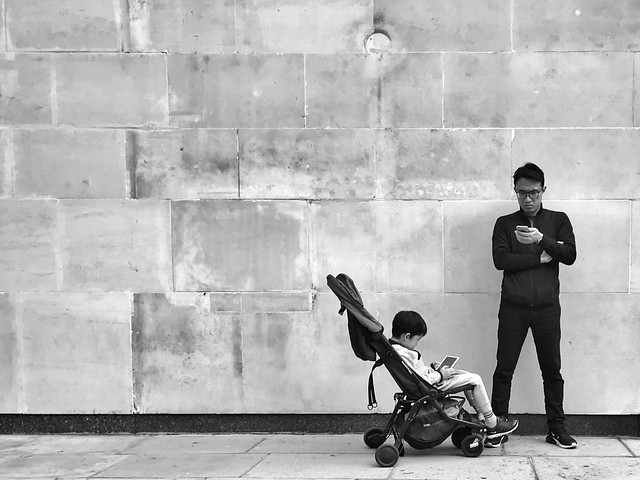 Back Story:
Just out and about and came across this scene. Do we praise the Dad for keeping his kid amused/entertained/quiet or do we have a go because he’s shoved a screen in front of the kid. Who are we to judge. Maybe the Dad’s been in the park all day kicking a ball around…we’ll never know. I just wanted to catch the image that I came across and made me think about it from from both sides. Do we distract or do we entertain or inform. Who’s more distracted? Questions…questions. 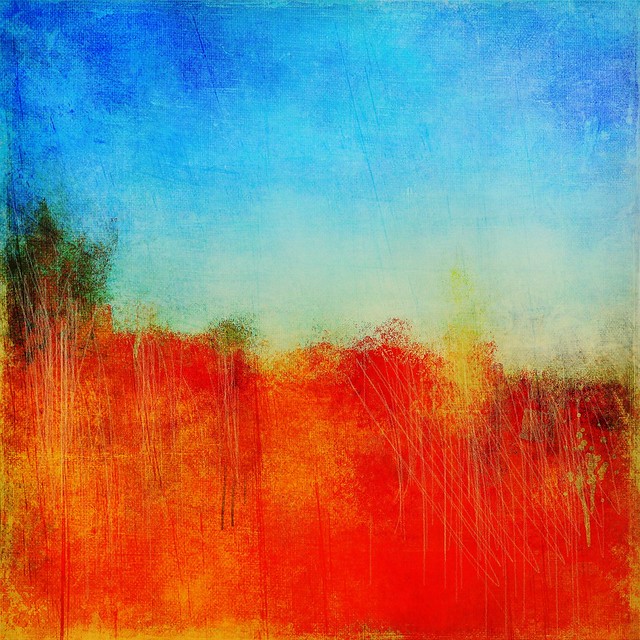 After finding a sea shell with a gorgeous orange colour, I added it to a sky pic in Juxtaposer then moved it around in Repix. The colours reminded me of the Australian outback. I boosted the colour and added texture using Hipstamatic and Mextures, finally adding some detail using the fine brush in the native camera edit mode. 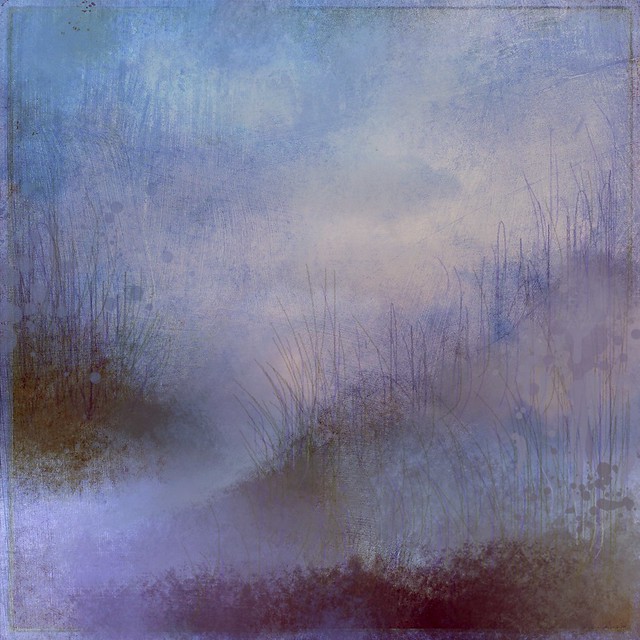 Made with Repix (repix.it). I took a random pic of a pot of flowers and moved it around in Repix until I had something resembling a landscape. I added some colour and texture using Mextures and Hipstamatic and then added detail with the markup brush in the native camera edit mode.

Taken from the train with the very dirty windows acting as a filter to add atmosphere and blur the details like the horse. 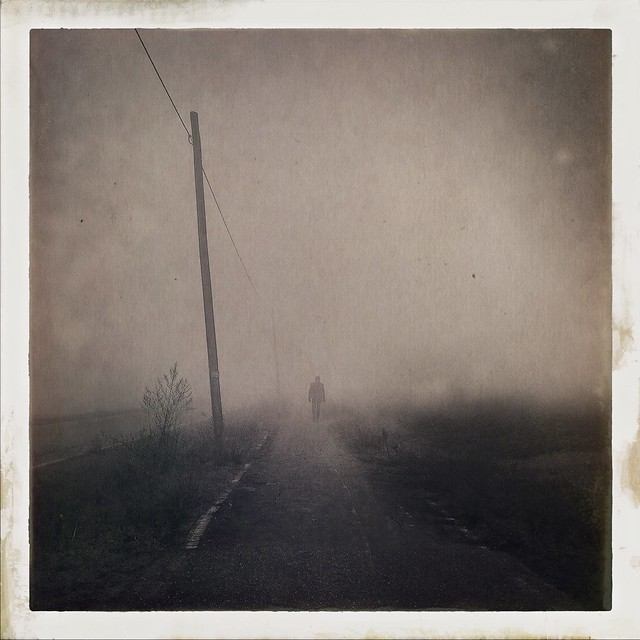 Hipstamatic, JohnS lens, Uchitel film. I was taking a walk in the foggy country when a person suddenly appeared, so I snapped a picture. An old Sonic Youth track came to my mind, so I named it “Disappearer”. I love fog! It’s very good for photos, but unfortunately because of pollution and global warming here in the Po Plain we don’t get as much as we used to. Meri Walker * Sweet Land of Liberty, Of Thee I Sing

I got to this piece by a circuitous route. It started with a straight up photo I took recently of a marked tree in a forest that I love to hike. I knew when I made the shot that I was responding to the shapes in the landscape more than the literal subject matter. Musing – like so many Americans – on the continuing collapse of our political system under Trump, I took the photo into iMaengine and began working it through some permutations. I also worked a moon table into a graphic.. And, as I started working with parts of the images in Superimpose, and then adding textures in Stackables and cleaning up areas using LightBrush and iColorama, I came to a clear recognition of the central figure as a kind of emotional self-portrait, focused on the  helplessness I feel as I watch my so-called governmental representatives destroy so much of what I have valued most about being an American. 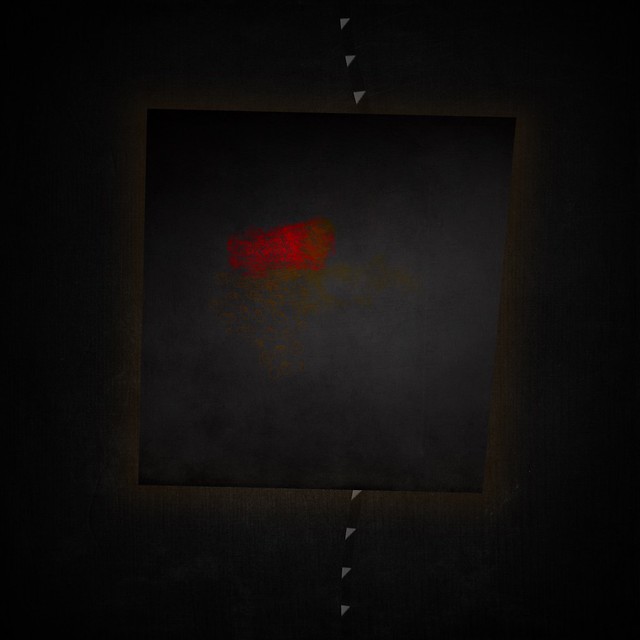 Backstory: This is one of series exploring the meaning of “epiphany,” both as a religious festival, as well as its sense of the essential. “Frankincense” alludes to the coming of the Magi as the first manifestation of Christ to the Gentiles. The triangular shape reflects the three Magi as well as its allusion to the triune nature of God. The diagonal broken diagonal reflects their journey to Bethlehem, encounter with the Christ child, and subsequent return home by a different route due to the threat of Herod’s malevolence. Within the frame of their encounter are two symbols, one the invaluable golden frankincense, the other blood red strokes foreshadowing the sacrificial death of Christ for mankind’s salvation.