This week’s Apps Uncovered features my favorite submissions made to our Flickr group over the past seven days. This week, there seemed to be a large number of images that were symbolic of something else – an idea, a feeling, a notion or a place. These images were somehow emblematic of a state of mind or an experience, beyond what the subject matter seemed to portray if viewed objectively. But then, when do we view any piece of art objectively? It’s always seen through the prism of our experience, expectations, and dare I say it, prejudices and beliefts.

This week’s lead artwork, “ORiGin of LiFe” by Michael Brunsfeld, suggests some process or object at the cellular level that might just be the start of life as we know it – but beyond that, it is nicely composed, has an intriguing, dimensional architecture and is interestingly framed. 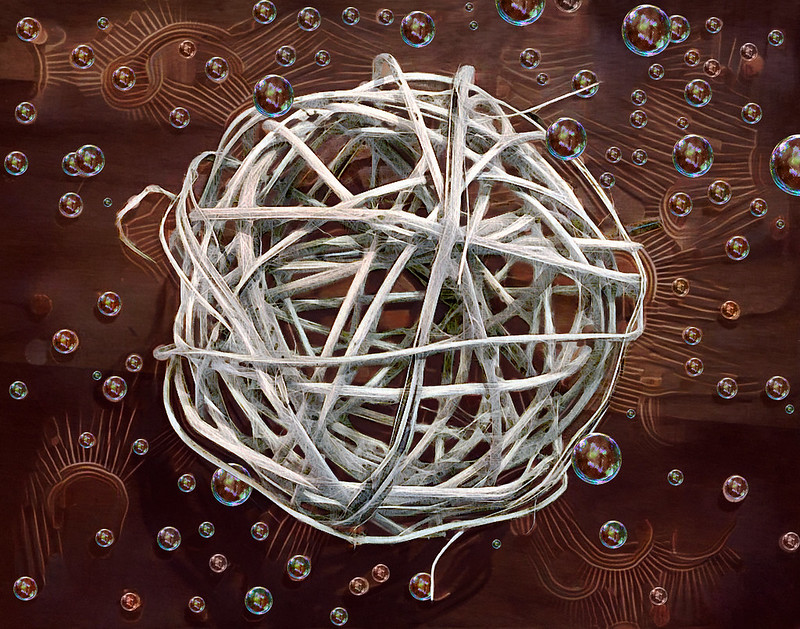 ORiGin of LiFe by Michael Brunsfeld

Apps used and backstory: I gave my wife a massage for her birthday and at the facility, This was one of a number of objects in the waiting room, so I shot it with my iPhone. I adjusted it within Snapseed (always the first step), then made a couple of filtered versions within Dreamscope. I made a high contrast mask to composite one of the textures into the background and another to blend into the twine ball, then decided to add the bubbles all finished in iColorama, where I always add finishing touches like selective sharpening and blurring and final color adjustment. 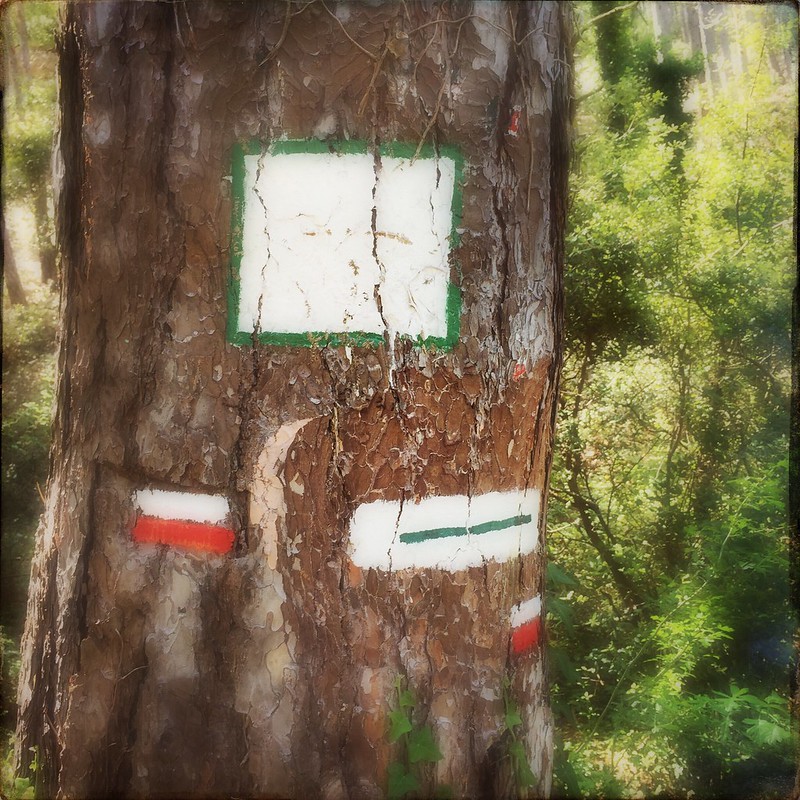 Apps used: Shot with my iPhone 6 and post-processed with Hipstamatic:Jane-lens, Sussex-filmrol, and Triple Crown-filter
Backstory: I am hiking in France and walked on the GR4 hiking trail. The GR trails are marked with two parallel white and red lines. I don’t know what the white and green markers mean.

Apps used: Hipstamatic Tinto 1884 Lens and D-Type Plate Film
Backstory: He likes to visit me from time to time. We have become great buddies over the years. To my inner demon, I see you, I hear you and I am not afraid. 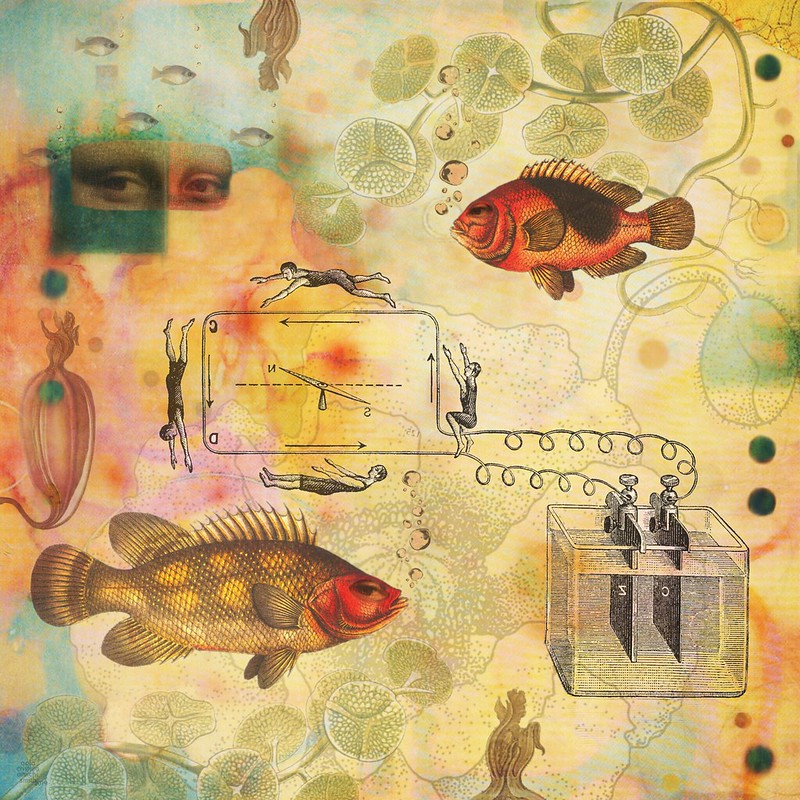 “stream of consciousness no. 1” by oola cristina

Apps used: FotoDa, Leonardo, Procreate, ArtStudio Pro, Mextures, Stackables
Backstory: My imagination was sparked by a triple exposure created while playing with FotoDa, and my attraction to those two fish from a volume of Dover clip art. The piece is about a stream of consciousness… one thing leading to another and another layered on another…
As mentioned, the background came from FotoDa. The various elements were composited in Leonardo with the bubbles added in Procreate. The blending, painting and correcting were done in ArtStudio Pro. Then the piece was finished with filters from Mextures and Stackables. (An aside… can someone please, PLEASE acquire Stackables and continue to develop and make it available on the App Store!)
As the image was coming together, I also saw it as an animation or a moving photo. For those interested in the moving photo, it can be found on my Flickr and Instagram. The apps used to create it are Plotagraph, Lumafusion and D’efekt. 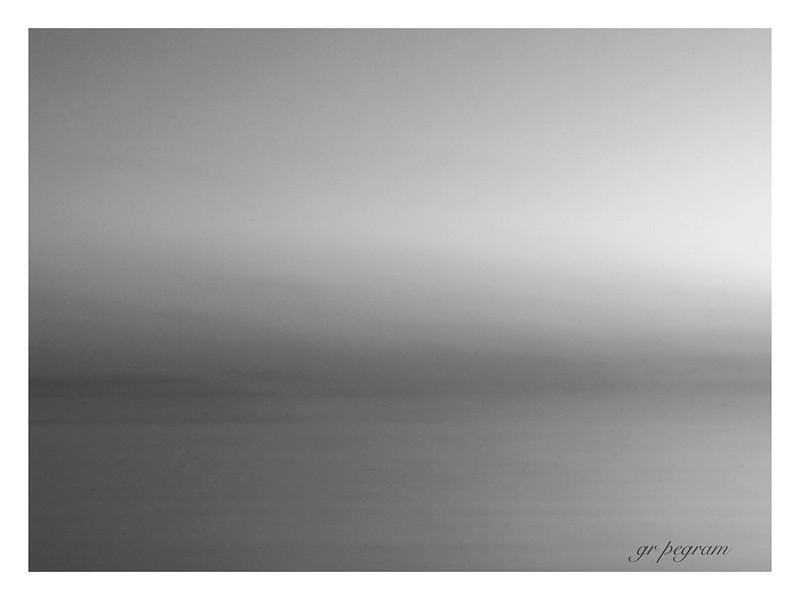 Apps used: Taking app used was the Slow Shutter for iphone. The objective of course, blurring the detail for “impression”. In this particular photo I determined the best exposure was 1 second with slight horizontal ICM (intentional camera movement). Snapseed was used as the editing app, converting the original to monochrome and framing. No further edits were made.
Backstory: Inspired by the master Seascape photographer Hiroshi Sugimoto. 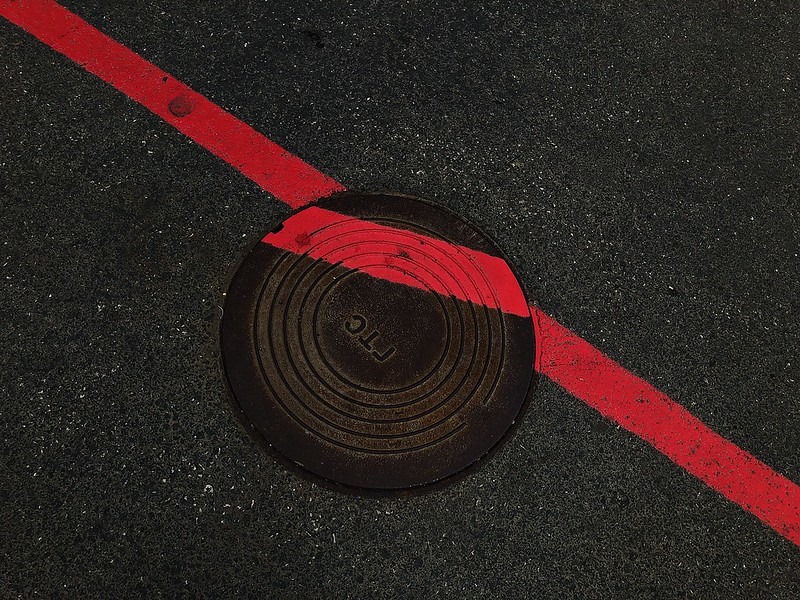 Apps used: Standard camera IPhone + VSСO SE3 filter.
Backstory: I took this shot during a long walk through the streets of the city. I wanted to take a picture of some street scene, but nothing happened around. Seeing this broken line, I thought that I could call it “imperfection of the world”, and a moment later – “life path in which problems happened, but they were solved”. It is very life-affirming. It was the first and only photo that day. 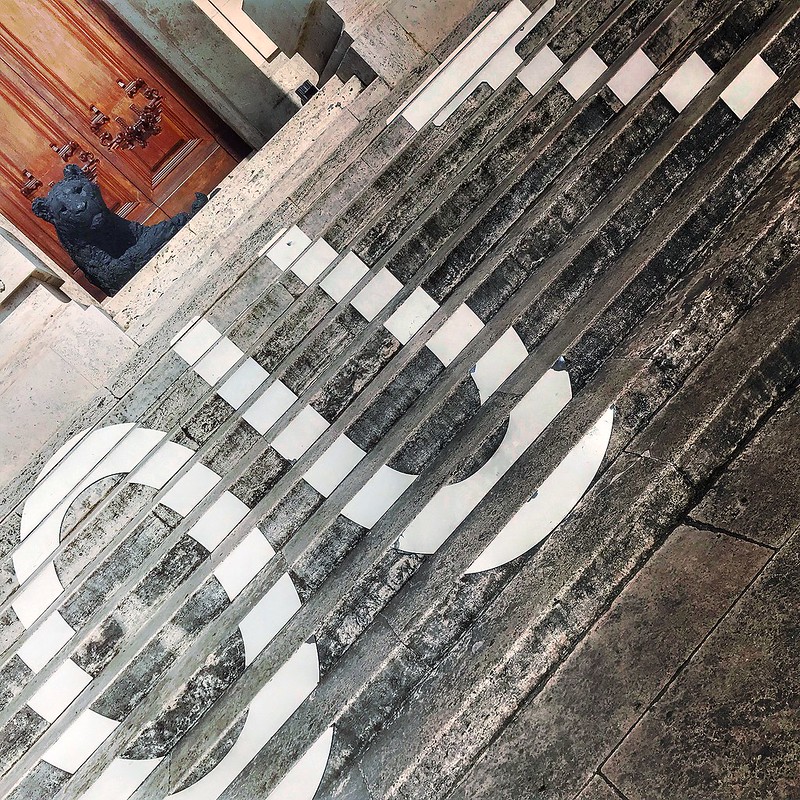 Apps used: I shot with the default camera app on an iPhone 7plus and edited with Snapseed.
Backstory: stumbled upon the National Gallary of Modern Art in Rome and discovered the space in front of it is occupied by large stone lions, plus the staircase bears the writing “Time is our of joint.” I took some shots before finding this angle, where both the writing and the lion in front of the door convey a rather different message. 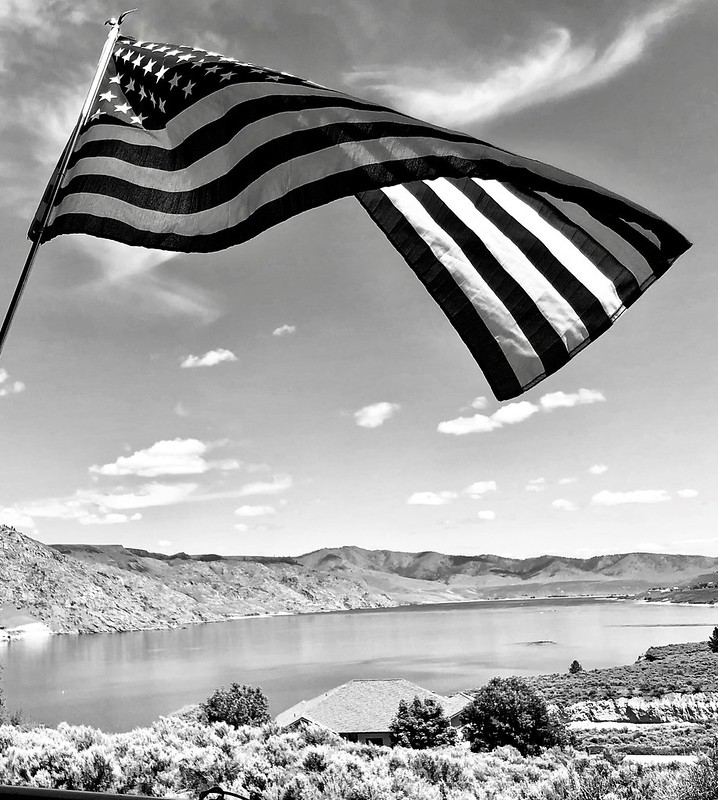 Apps used: I just used the native photo app on the iPhone X but put it in B&W mode to take the shot. I then used the photos app and Camera + to use some Clarity to bring out mid-tones.
Backstory: The backstory is that it was Memorial Day and my wife had our flags put out to commemorate it. I liked how the flags were unfurling in the breeze and it looked like they were flying over the lake, which is Lake Roosevelt, named after Franklin D. Roosevelt. So it all felt very patriotic and retro at the same time. In my mind, I was thinking of the flag scene in Saving Private Ryan and how it was filmed in black and white and I hoped to capture some of the same spirit. 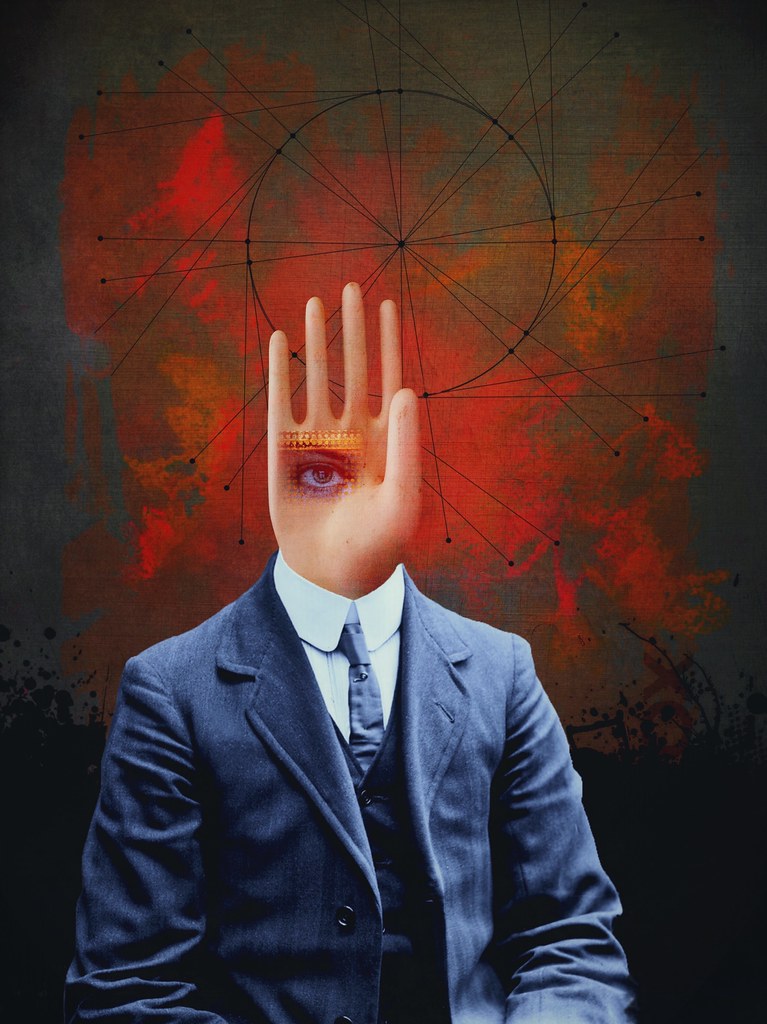 Apps used: Snapseed, Eraser, iColorama, Mextures, Retouch, SuperimposeX
Backstory: Mr. Tuesday is a mixed media piece, and one in an occasional series of surreal images I began this year. The background image is a photo of an oil pastel and ink painting I finished recently. The foreground was an assemblage composed from a vintage portrait, masked and re-colored, a photo of a porcelain rubber glove mold, masked and colored using Eraser and Superimpose, an eye taken from a previously amped image, and a vector image created in iColorama. I’d like to report a deep and philosophical foundation for this image but, in truth, it is no more than a bit of whimsy that allows me to work on technique and to explore creative combinations of disparate elements. Surreal works like these are also an occasional trip home of sorts, as I began my exploration of art as a teenager clipping and pasting photos and typographic elements from magazines and other printed material.

After Work by G. Billon

App used. snapseed
Backstory: It was a long journey working far away from my home and familly. In fact an ordinary grey and rainy day. But the choice of my one Night hostel chamber and the weather reserved me a good surprise. I instinct snapped this particular and perfect moment.