Welcome to this week’s Apps Uncovered; a gallery of iPhone images shot and edited with an iPhone or iPad. Thanks to Debara Splendorio for her beautifully edited illustrative beach image “low tide” reminiscent of children’s illustration in the 1950s. With current storms in the UK, we are longing for warm and carefree days like your splendid image and the backstory with us. Thank you Debara for sharing this with the iPC Flickr group!

Some iPC News: Bob Weil is taking a well earned break for a few months from selections as his life is pretty busy right now so if anyone would like to have a seat in the Apps Uncovered selection chair for a few weeks, please give me a shout. 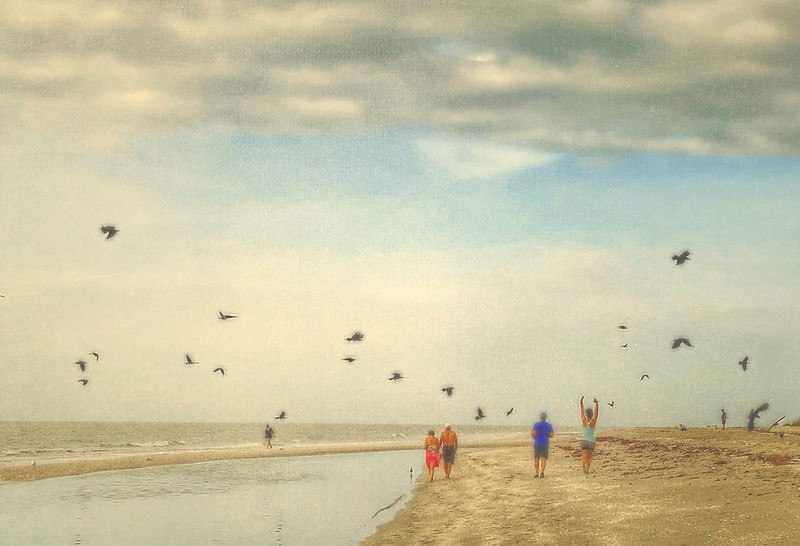 low tide by Debara Splendorio
Apps used: Snapseed, iColorama and Stackables.
Backstory: Sanibel Island, Florida is known as the best shelling location in North America. The best time to shell is at low tide just after sunrise. As the water moves out, shells are exposed in the sand, tide pools and on sandbars. I came upon this quiet scene as I was walking back. There was one person to the far left on the sand bar and four others to the right of the tide pool. It had a nice balance. Out of nowhere a flock of sea crows took flight. I happened to capture the moment that the woman on the right raised her hands in the air towards the birds…the birds nicely added movement to an otherwise quiet seascape. 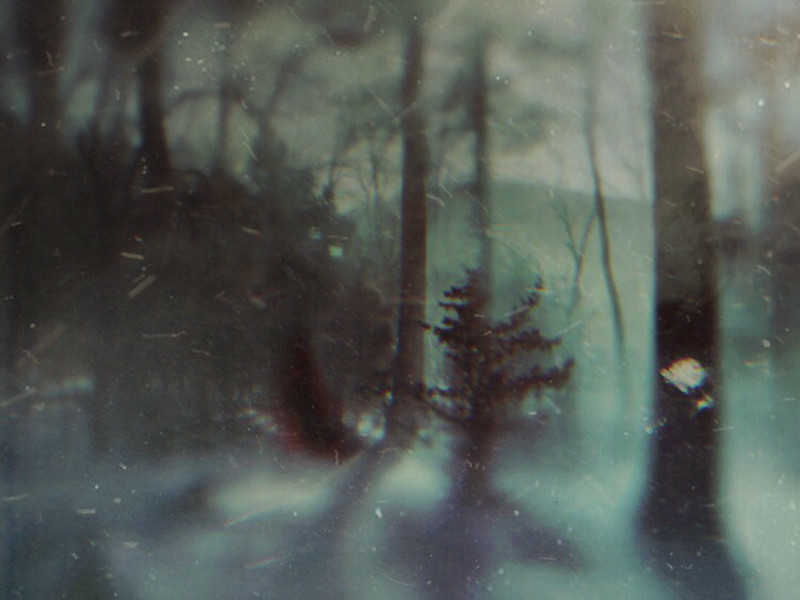 The Vampires Wife by Black Eyed Suzy
Apps used: Tadaa, PicsArt, Mextures and Afterlight
Backstory: This photo actually was taken last winter and edited this past summer. With my part of the country lacking winter weather this season, I decided to post it to give me some sense of a snowstorm. I first darkened the picture I took in my backyard during blizzard like wind, and felt it was missing something. Using PicsArt I added a mysterious figure lurking among the trees. I added some texture and color using the remaining apps. The caped woman made me think of a designer I adore, Susie Cave (wife of Nick Cave), and I decided to title it after her clothing line. 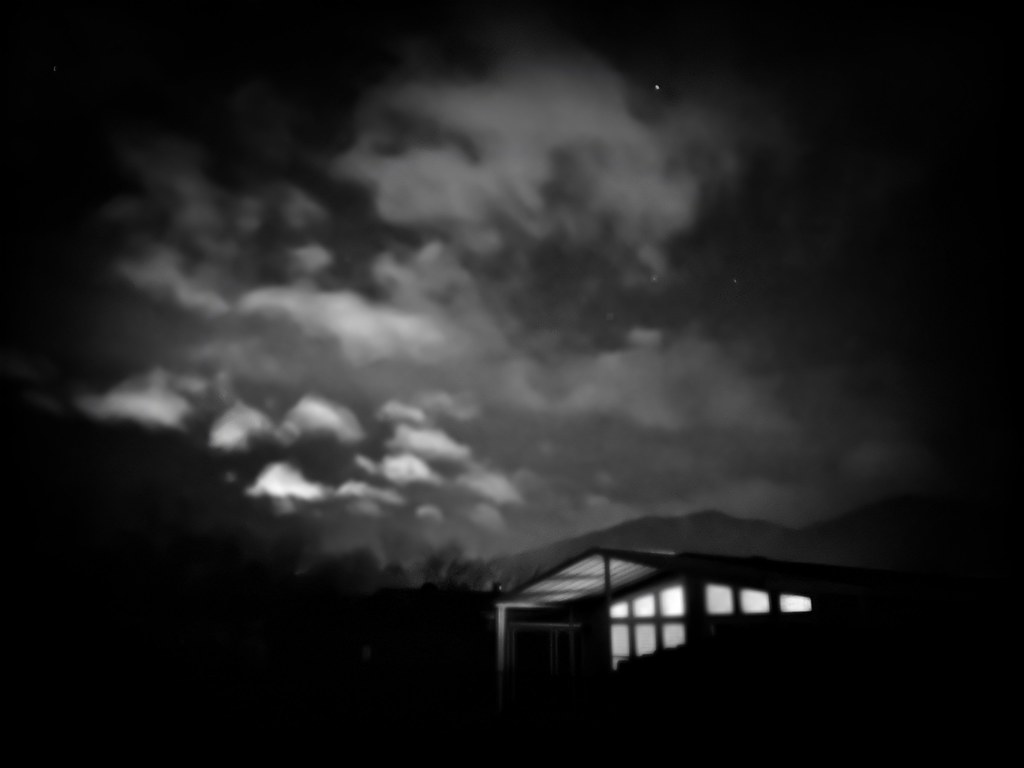 Apps used: iPhone camera using Night Mode, iColoramaS, Hipstamatic 358 and Lightbrush
Backstory: After all I’d been reading and hearing about the new cameras in the iPhone11Pro from other mobile photography enthusiasts, as soon as mine arrived, I wanted to try out Night Mode makes possible. It’s such a provocative analog to my own night vision. When I can brave the cold (and the rain) I’m having surprising and mystifying adventures prowling around in the dark – seeing what I see with my eyes – and then seeing what I can capture with Night Mode.

Night Mode’s odd color is often distracting to me, so with this image, I made a monochrome conversion from the native camera capture using iColoramaS. Then I applied a custom combination I’ve made in Hipstamatic to deepen the contrast further and intensify the glow in the windows of the house. Using Lightbrush, I brought those edits together without sacrificing the stars. 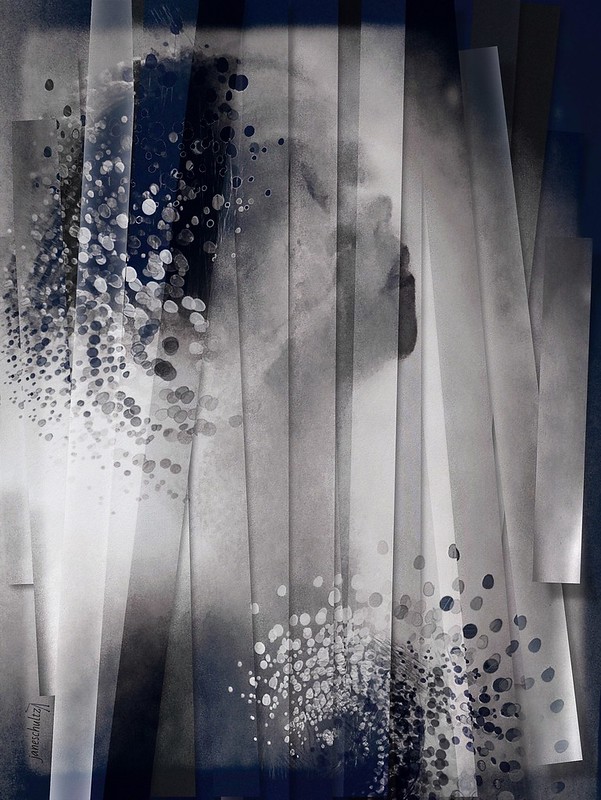 Somewhere Remembered v2 by @before.1st.light (Jane Schultz)
Apps used: It originates as a Hipstamatic and has been edited with numerous apps, including iColorama and Juxtaposer.
Backstory: This image is constructed and intends to convey the feeling of contemplation, when viewed through shades so somewhat obscured. 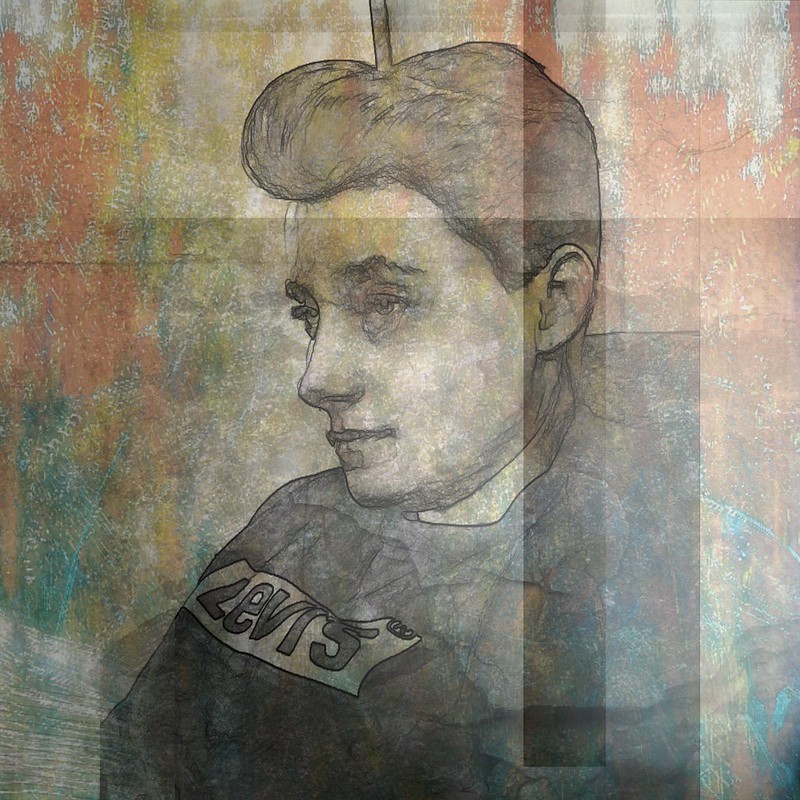 Bijna jarig (almost birthday) by Laila Bakker
Apps used: Shot with Apple iPhone 11 Pro Max.
Backstory: This is my daughter with her weary look of me and my iPhone camera. I love to photograph her but she is not always cooperating. I did several edits in iColorama, layered them in Superimposex. The rectangles are created in Deco Sketch. Finishing touch in Snapseed. 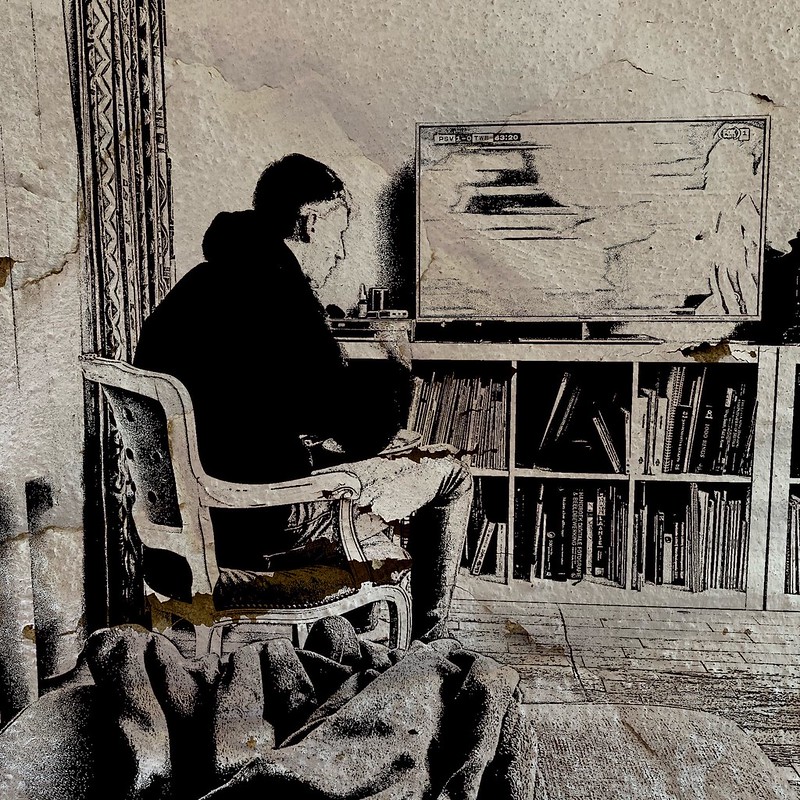 Watching soccer by Laila Bakker
Apps used: Shot with Apple iPhone 11 Pro Max. iColorama, Superimposex and Snapseed Backstory: A lazy Sunday afternoon with my son in front of me watching soccer and eating in front of the telly. 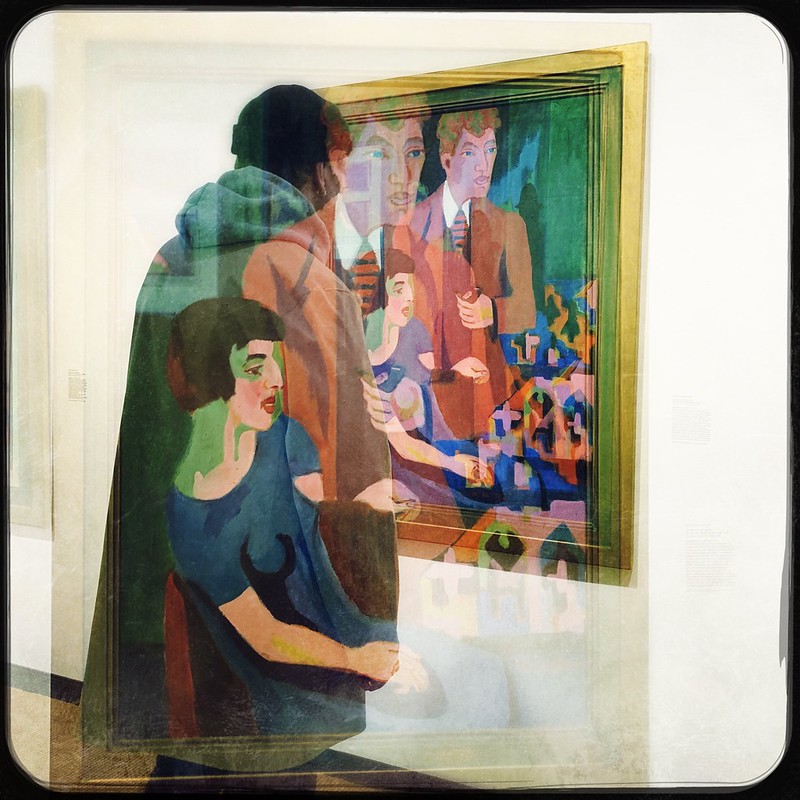 Apps used: Hipstamatic Double-exposure with Americana lens, Love81 film, and TripleCrown flash..
Backstory: One of my favorite photo techniques is using the switch on hipstamatic to double-expose a painting with people. It’s a hit or miss technique which takes many tries to get a good one. In this case, the viewer becomes part of the painting as the woman in the painting seems to jump out over him. This was taken at Die Brücke Museum’s show “Never Apart” in which all the frames were designed and some painted by the artists to become an integral part of the artwork. This one was painted beautifully so that the frame and the painting become a single entity. 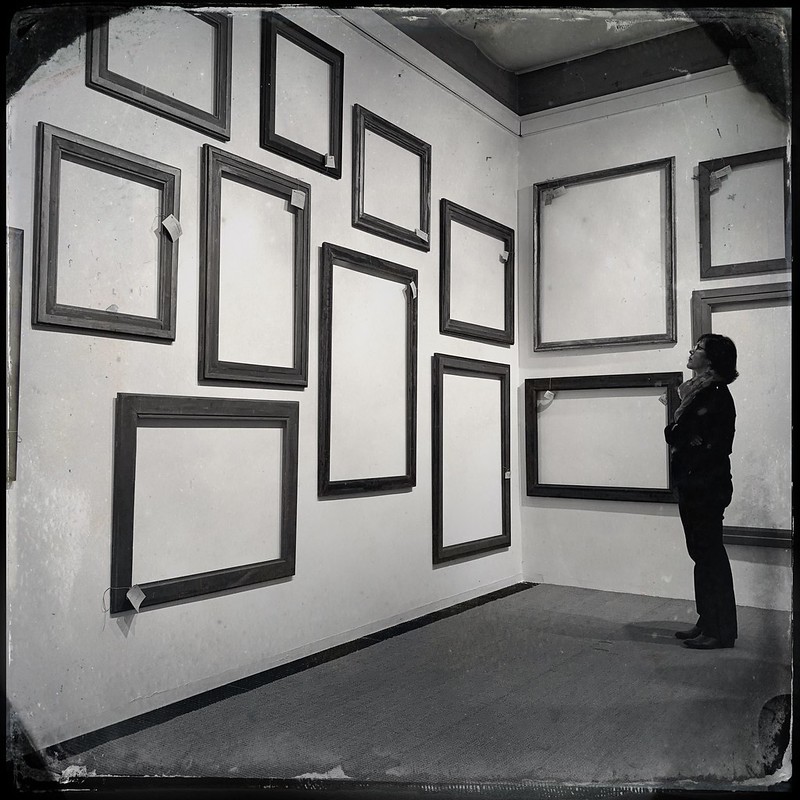 Apps used: Hipstamatic with Lowy lens and D-TypePlate film
Backstory: Taken at Die Brücke Museum’s show entitled “Never Apart”. The exhibit showed paintings by expressionist artists who had designed and often painted the frames to compliment the paintings. Research was difficult because catalogs usually show only paintings but not the frames. This photo is of frames from that time where the paintings have been lost. 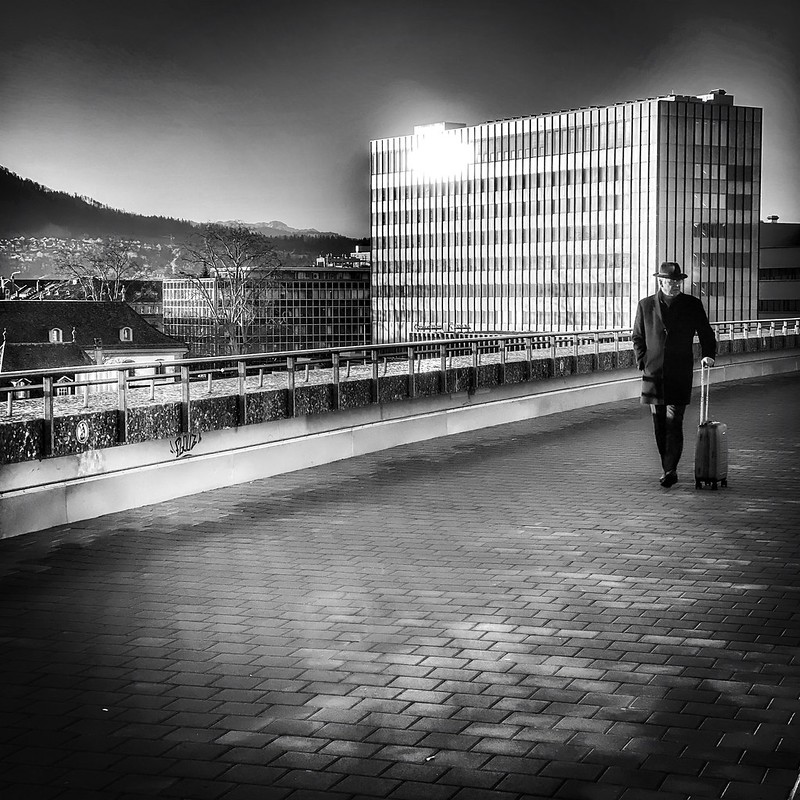 Back soon by tmbx (Tomaso Belloni)

Apps used: I shot with the default camera app on an iPhone 11pro max (zoom camera) and edited with Snapseed and Hipstamatic (Jane Lens, Aristotle Film, and Triple Crown Flash).
Backstory: A cold and clear winter morning in Bern, Switzerland. A man with a hat comes along and yours truly runs towards him to reach the position for the best framing, chasing the reflection of the sun. This is the result.