This week’s Apps Uncovered presents a selection of exceptionally intriguing images posted this past week in our Flickr group. As frequently happens, as I started to make my selections, a pattern emerged in the subjects I was choosing. I had recently created a compilation of photos on this same theme after a trip abroad, and the intrigue of what lies behind a door, or what a window has seen, continues to tickle my imagination.

This week’s lead artwork, “Jugendstil stroll, Vienna” by Joseph Cyr brought back my own memories of this famous facade – but I was never successful in capturing the scene well. The absence of people on the street, save for a man dressed conservatively in a hat, suggested times long past. The stores on either side don’t give away the contemporary nature of the scene, and I could image this as black and white photo as easily as a color one. 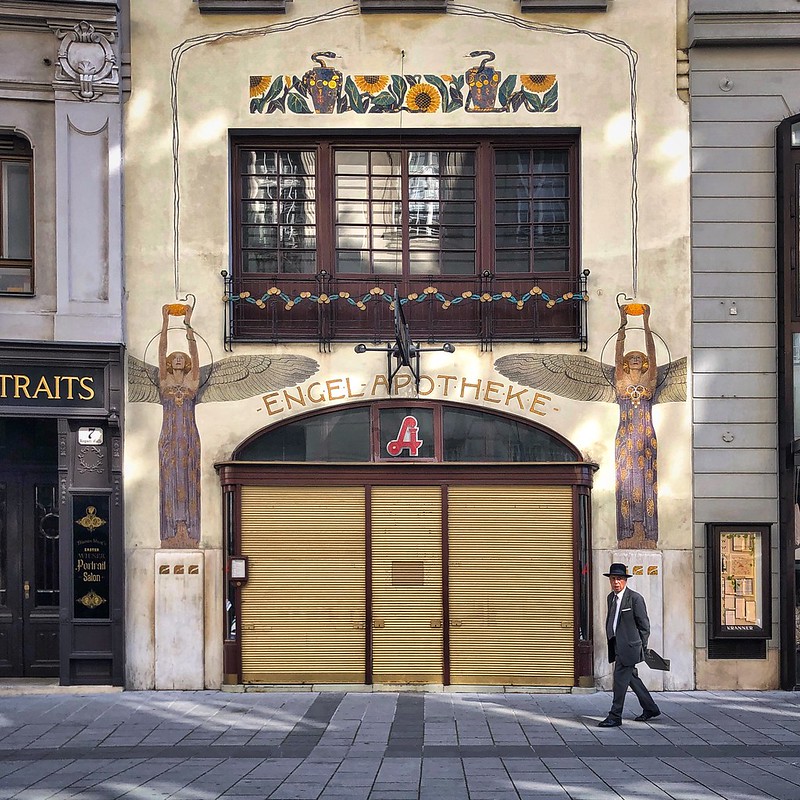 Apps used and backstory: Wandering around central Vienna on my first weekend there, I turned a corner and found myself in front of this famous Jugendstil facade. The city is a pedestrian-architecture-lover’s dream. As I got my phone out of my pocket, I noticed an elderly gentlemen off to my right, taking his Sunday evening stroll. Just a few seconds later, he strode into the scene–perfect timing, AND wearing a fedora… I took this with my iPhoneX, native camera, and used snapseed for just a bit of exposure correction. 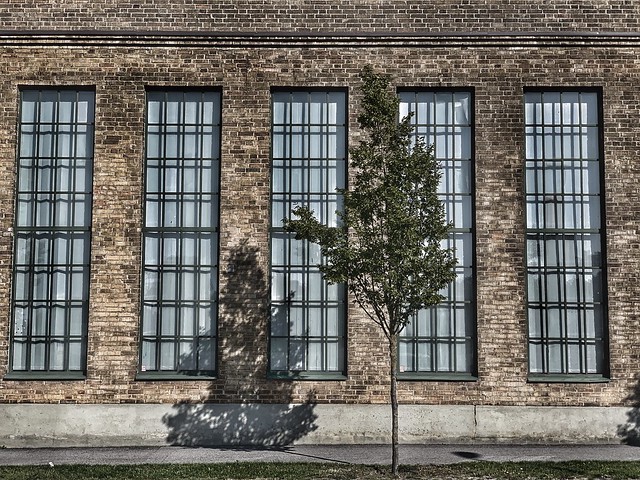 A Tree with a Shadow by Erik Viggh

Apps used and backstory: This image is the street front of vintage architecture that used to be a factory. I was caught up with the squared patterns behind the tree and it’s shadow. A sight I see every day but on this day it was a photo-op! The image processed with Snapseed using the HDR options.

Apps used: iPhone 7+ Pano Sabotage, Retouch, Snapseed, Procreate, ImaEngine
Backstory: I came across the practise of ‘pano sabotage’ on a mobile device a couple of weeks ago and have been having enormous fun with it ever since. I used the pano option on the native camera on my iPhone 7+ and then moved it forward in waves. There’s various ways of doing it and it takes a bit of practise but you can create some wonderful results. When manipulating this image, I removed the black lines it sometimes creates on the sides with Retouch. From here I took it into ImaEngine, choose an option and turned off the lines layer before saving. Finally I took the original and traced some of the doors and windows in Procreate by hand to give some detail and darkened the sky. or help in creating a ‘Pano Sabotage’ go here: www.flickr.com/groups/2892788@N23/discuss/72157685947542874/

Apps and backstory: North Platte, Nebraska. Edited on iPad and processed in Snapseed.

On a winter’s day by Fleur Schim

Apps used: IphonexS cameraplus2 Snapseed icolorama (tone, sketch)
Backstory: It was a bitter, winter day in Kraków. We had arrived the previous night, and ventured out mid day to explore the village. We had no itinerary, as we walked and photographed the picturesque city. I noticed an inviting facade, which turned out to house a restaurant, Albertina. We were invited inside and seated at a lovely table with a view of this scene: The sky was grey. The building was old. The lighting was flat. The trees were stark. Black and white, and grey. I was able to capture the scene while seated at the table.
Always look around and notice your surroundings (both inside and outside). A great capture might be just over your shoulder! 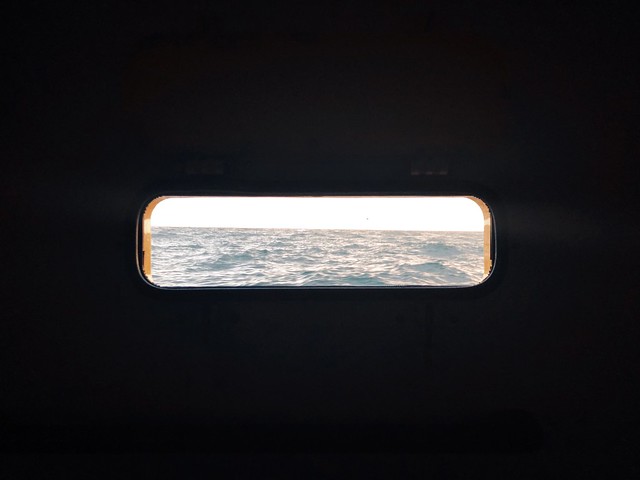 Apps used and backstory: I took this photo last year while vacationing with my family in Gulf Shores. I was below deck of a catamaran, trying to catch a dolphin shot through the porthole but to no avail. The photo was originally shot with Hipstamatic but I didn’t like the outcome so I saved the original and used the VSCO u3 preset. 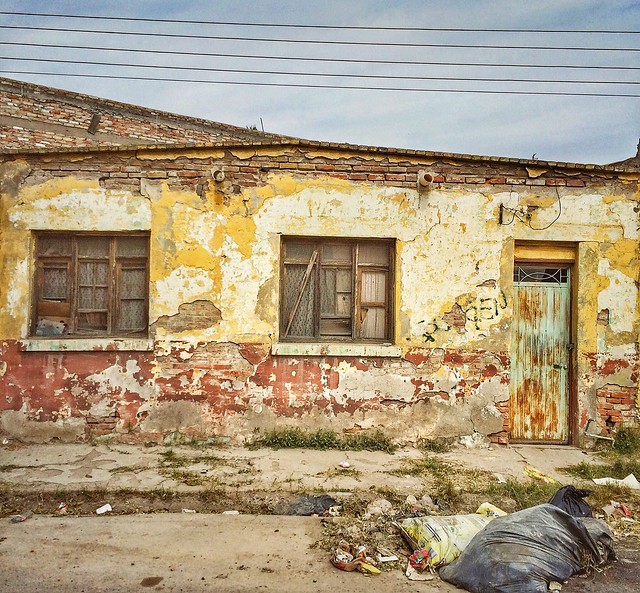 Apps used and backstory: The application I used was Snapssed, with an iphone 5s, yes! I still have an iPhone 5s, I think your camera can be squeezed to take great shots. I took the picture in the city of Torreón, Coahuila, Mexico, it is a place that has this type of old abandoned and ruined houses. 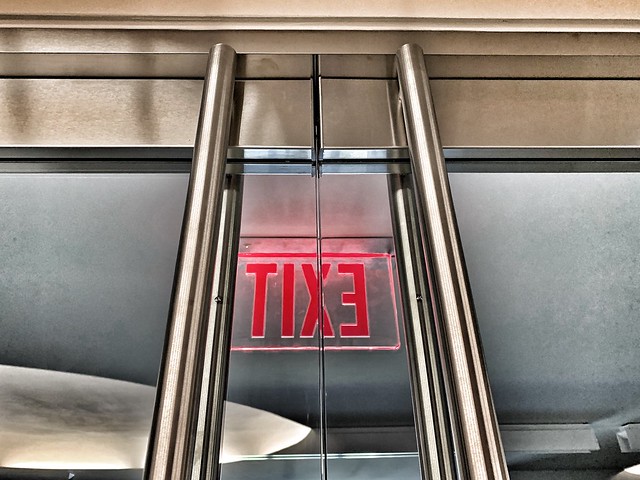 App used: Snapseed
Backstory: I made this photo at Knox College’s Ford Center for the Fine Arts in Galesburg, Illinois. I had just finished a gallery walk of a photography exhibit when I walked by this empty classroom. I was attracted to the reflection of the sign in the glass. 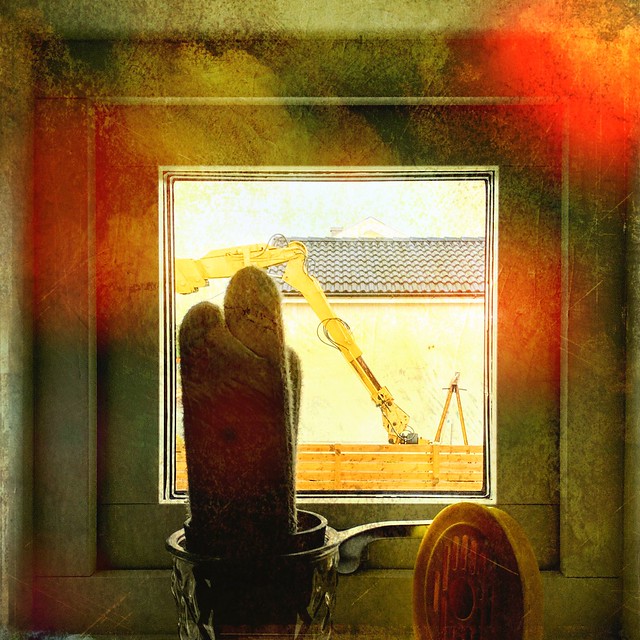 There’s a machine in my window by Erik Viggh

Apps used and backstory: The image was taken out a small window facing a construction site. The yellow backhoe was new to be seen in that little window. The light leaks, exposure and grunge all added using Mextures, Photoshop Express and Snapseed.