It’s been a busy few weeks in the world of iPhoneography. Last weekend I was invited back to the second Mojocon in Ireland to lead a photowalk and workshop with fellow iPhone photographer Brendan Ó Sé. The SOLD OUT, major international media conference focuses on mobile journalism, mobile content creation, mobile photography and new technology and I’ll be posting my adventure here on iPhoneographyCentral very soon along with access to some of the materials I used at the workshop.

Angie Lambert’s beautiful image, shot with Procamera app, steals the top spot this week. Angie says about her image; “I rarely have a specific pose or plan I rather let the artful moments guide me.” The image has a wonderful sense of freedom about it as the figure seems to be dancing alone with bare feet and the blurred treatment and water drops make us feel we are sneaking a peak at this private moment. Really great work Angie!

To find out more information about each image, roll your cursor over the photo. Also, click on the image to find out more about the artist’s work on Flickr. Thank you all for sharing your wonderful images on our iPC Flickr group and wishing you all a great iPhone shooting and editing week ahead!

Thank you to everyone who submits work to our weekly Flickr showcase. If you would like to be considered the weekly gallery, join our iPC Flickr group by clicking here. 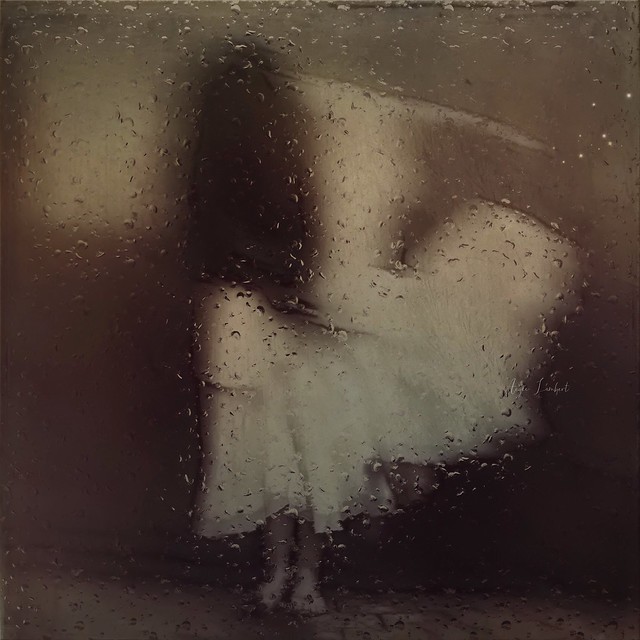 Apps used: Image taken with ProCamera app and processed in snapseed. Camera+ FocalLab Formulas Mextures Repix Over (to add my signature)
Backstory: I gathered my iPhone, tripod, and remote shutter one evening and went outside to the patio. It had rained earlier, during the day, and the skies remained clouded. I twirled, twisted, and moved about the small space until I had captured several frames. I rarely have a specific pose or plan. I rather let the artful moments guide me. This insures the results are as much of a surprise to me as they are to the observer. 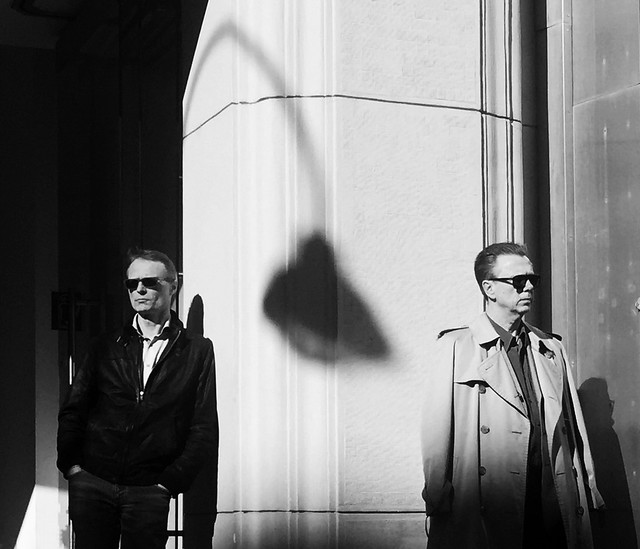 Apps used: Image taken with proCamera app and processed in snapseed.
Backstory: The space between us/ series 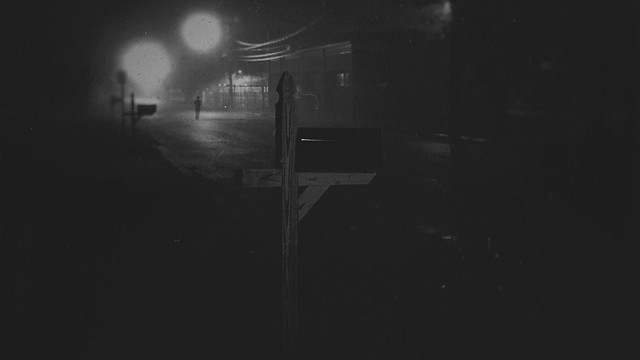 Apps used: “Postman” was shot with iPhone 6’s native cam. I used my own Mextures formula NVTYDKE, then ran it through Snapseed for a b&w filter and 16:9 crop. 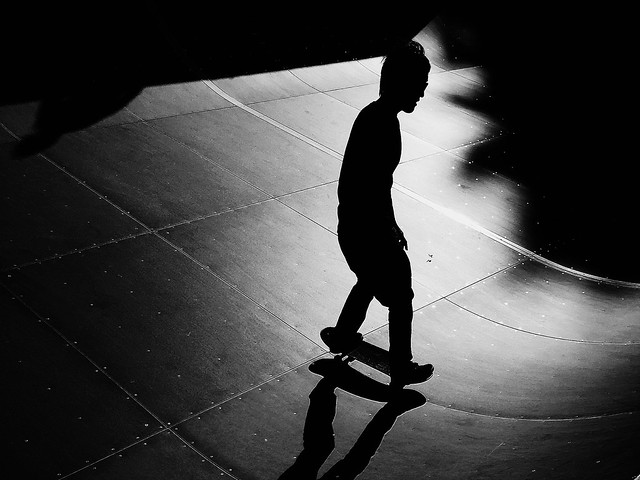 Apps used: Snapseed. Backstory: ‘Shadow Skater’ was taken at Komazawa park, Tokyo. I decided to go there to take some pics at 4pm so I could catch some nice shadows. I didn’t know there was a skatepark there so that was a pleasant surprise. I skated a lot in my teens so I decided the best vantage point would be to get up on the platform. After about 10 mins I felt I had enough pics to work with.. I then tuned the image in Snapseed & used the vignette effect. 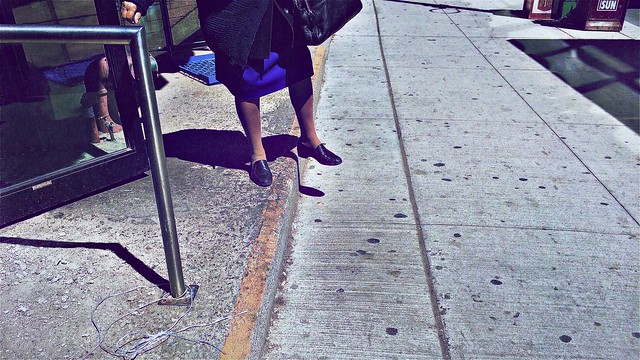 Apps used: Shot and edited with Hipstamatic. +
Backstory: A woman emerging from the Portuguese butcher in my neighbourhood. 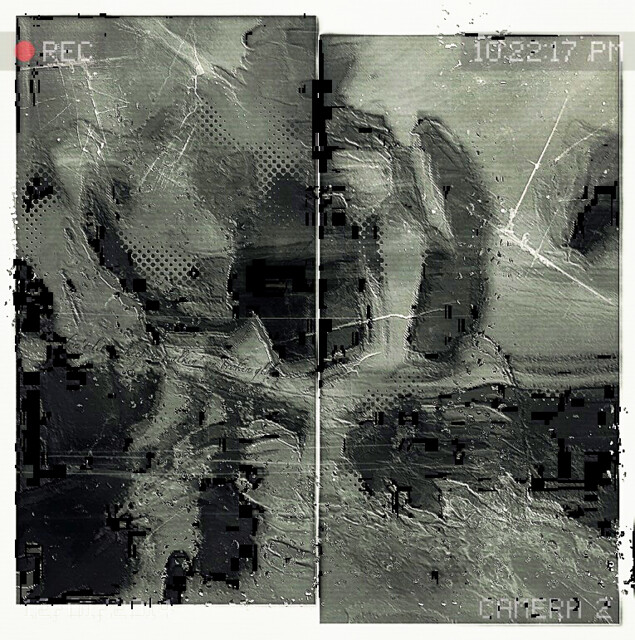 Apps used: Hueless, iColorama, Phonto, Repix, Camly
Backstory: This piece started with a highly realistic, high-contrast b&w shot of some parrot tulips blooming beneath my neighbor’s lamp post. I found myself drawing on them on my new iPad Pro using iColorama and then painting back into them with washes of flat tone. Then the composition turned abstract and I started hearing Annie Lennox singing, “Don’t Let Me Keep on Walkin’ On Broken Glass,” on the giant jukebox in my head.

When I added those words into the image with Phonto, I split it into a diptych. But the words were nowhere near strong enough to carry the rest of the feeling, so I added more tone and line with Repix and painted further through several masks in iColorama before bringing the image into Camly to add the video cam capture texture and words to ground the process for myself in “real time.”

It’s both surprising and delightful that this image has received attention in social media and also here on iPhoneography Central. I’m comforted by the conversation that’s grown up around it because I feel less alone hearing other’s feedback about it and their questions about the backstory.

Fact 1: I’ve been struggling mightily with arthritis pain for the last few weeks and begging the gods for relief.

Fact 2: I’ve also been grappling with emotional pain during this time as I participate in a challenging writing class called “Writing As Legacy,” led by my friend, Marlene.

Fact 3: some recent gut-wrenching interactions online have left me feeling like I was locked, barefoot, in a room full of broken glass, as Annie Lennox sang.

Fact 4: worse than these pains has been the growing sensation that I’m watching my nation crash on the rocks. Americans of all ages and persuasions seem to me to be adrift in high torrid seas of hatred and rancor. And there’s no apparent end to the storm in sight. I’ve been trying to stay calm myself, but every time I stretch my feet down, reaching for some solid ground I can use to push up and grab a deep breath before the dark water rises again, my toes land in the shatters and shards of our democratic ideals. Tough going for a girl who grew up in the Nation’s Capitol and took those ideals deeply to heart in the 1950s.

At this point, in early May, 2016, the only way I can see past the relentless pain is to swim hard and long towards Love. Love for the Earth. Love for my friends. Love for beauty. Love for myself. Love for Love itself. And love for all our broken hearts.

I’ve got nothing political left to believe in… 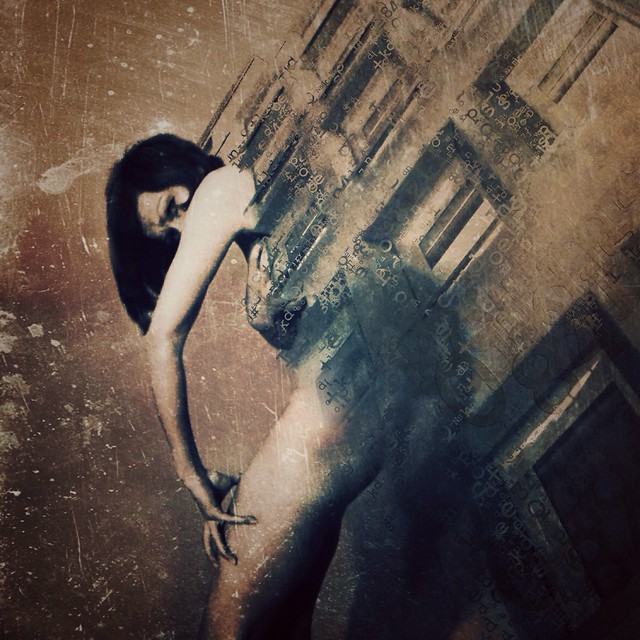 Apps used: Procreate, Monovu, PhotoshopTouch, iColorama and Snapseed.
Backstory: [This] image was inspired from the theme “big data” – how strong we are affected from digital world and data-information flooding on us. The theme was suggested by MCC in smART gallery. I used two photos and did many edits with the apps listed above. 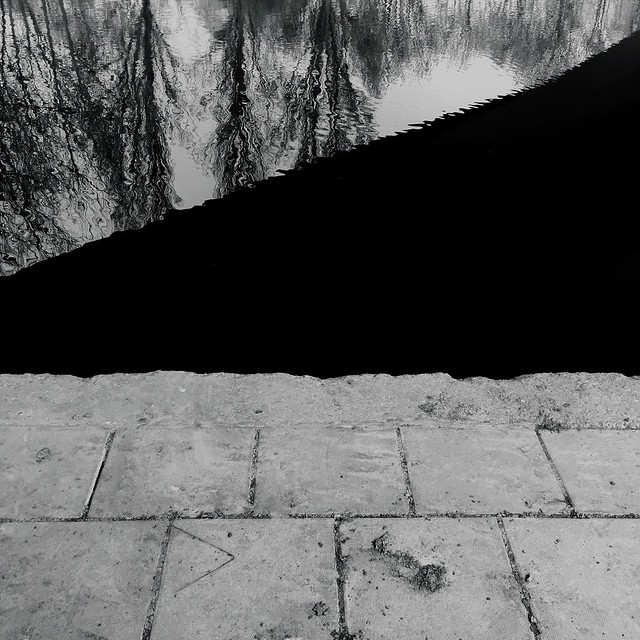 Apps used: It was taken on an iPhone 6S using the ProCamera app set to a 1:1 ratio. It was saved as a tiff file. It was then edited in Enlight, and this comprised conversion to B&W, and a small increase in contrast and sharpness.

Backstory: This picture resulted from a short lunch-break walk in a rather uninspiring area. Having found nothing worth photographing, I began heading back but chose a route that took me under a road bridge just where it crossed a small river.

As well as a picture of the bridge itself (www.flickr.com/photos/smfifteen/26522800431/in/dateposted-public/), I took this one of the water. The reflection shows the underside of the bridge, and the trees of the opposite bank. 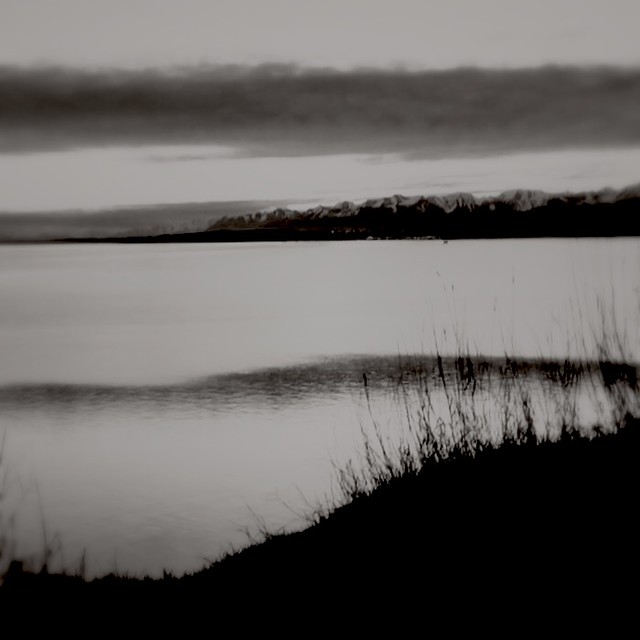 A certain calmness by Alan Julliard

Apps used: This photo was originally shot with Slow Shutter, handheld to soften the edges and emphasize the horizontals, then edited in Hipstamatic to further flatten the image. I commute to work by bicycle so I see this view every morning when the light on the Anchorage coast is the most dynamic. It is not uncommon to see moose, eagles, porcupines, even bears, on the way. 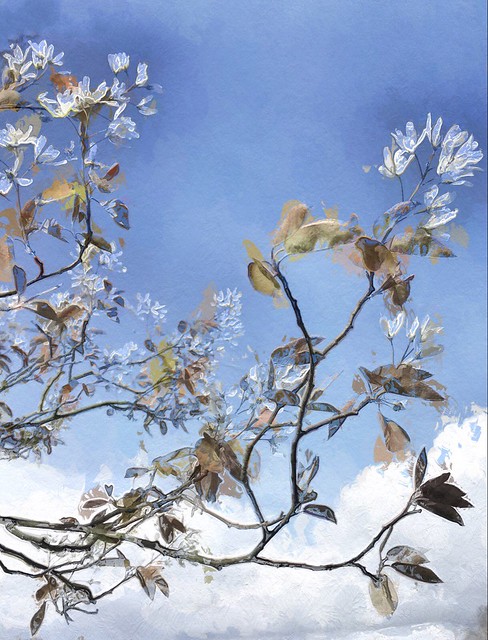 Apps used: I shot this with the iPhone 6s Plus camera app and brought the image into one of my favorite apps, Cameramatic, for the conversion to black & white. Some additional minor post processing was also done in Snapseed.
Backstory: This image was taken during a trip to St.Louis,MO. Although, I was born in St.Louis I had rarely visited Union Station, an historic landmark, dating from the 1890s,which was once the largest & busiest train station in the world. In the 1980s it was converted into an hotel and mall. Later, an Amtrak transportation center was added.
The image pictured is just one of the elaborate artifacts and ornate designs that represent Union Station. It is a detail of a carved panel which formed one of the smaller archways in the hotel lobby. The floral pattern shown was gilded; the gold leaf alternating with the deep shadows of the relief carving cried out for a black & white treatment. 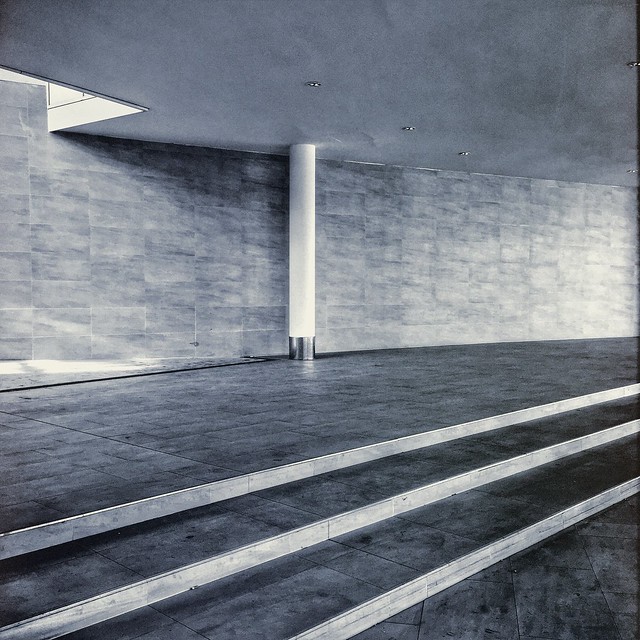 Apps used: I shot with the iPhone 6 default camera and edited with Snapseed for basic adjustments, then imported it in Hipstmatic (Akira lens, T.Roosevelt film).

Backstory: I was in a hospital complex early in the morning. It was an unusually crispy day in Milan and I took many shots. This is a photo of a new building with an empty front area with good lines and a cigarette-like column oddly located very close to the wall. With that special light it was almost too good to be true. 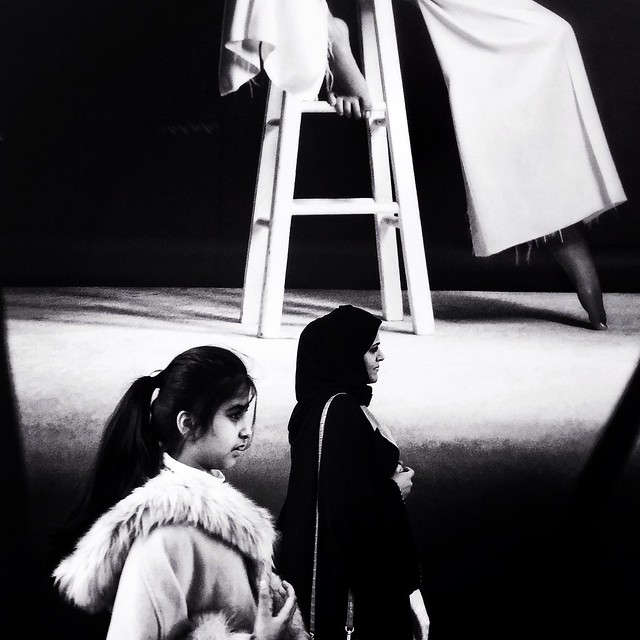 Apps used: Captured and edited on an Iphone6 with Snapseed.
Backstory:  While strolling through Königsallee, the famous shopping street in Düsseldorf, I noticed the big billboards on one of the bridges and found myself a spot where I can wait long enough to catch a good scene. I took photos of many people passing by and this one is one of my favourites. 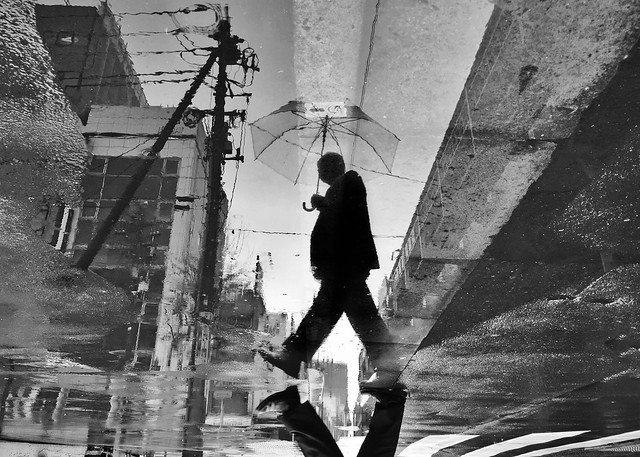 Apps used: Snapseed.
Backstory: ‘Truth is stranger than fiction’ (Mark Twain) was taken in Nakameguro, Tokyo. I’ve become quite familiar with this puddle as every time I go food shopping & it’s raining I stop & take a few shots.. There were a few really cool puddles there but they’ve recently relaid the pavement which was frustrating from a photography point of view.
This time I found a slightly different angle & once I was happy with the composition it took a bit of waiting for the right character to fill the frame. When you find a good place to shoot (even if it’s just a puddle) it’s a good idea to return to the place & see what different angles you can get. After I made a few adjustments in Snapseed.