This week’s Apps Uncovered includes a great range of imagery, from still life and architectural to landscape / street and the surreal. Shinnya Umetsu leads off this week’s Apps Uncovered with an striking image of a lone figure, holding a vase with small red berries. With the popularity of the selfie (and our interview with the talented Susan Tuttle about her iPhone selfie course), three self-portraits made it to the list this week. Other contributors include three contributors to our book (The Art of iPhone Photography) – Cecily Caceu, Ade Santora and Susan Blase, as well as returnees Pirmin Follmi, Paul Moore, Michał Koralewski, Lou Liuzzi, Pu the Owl and Geri Centonze and newcomers juta jazz, Sarah Zambiasi, and Karla Da Silva. 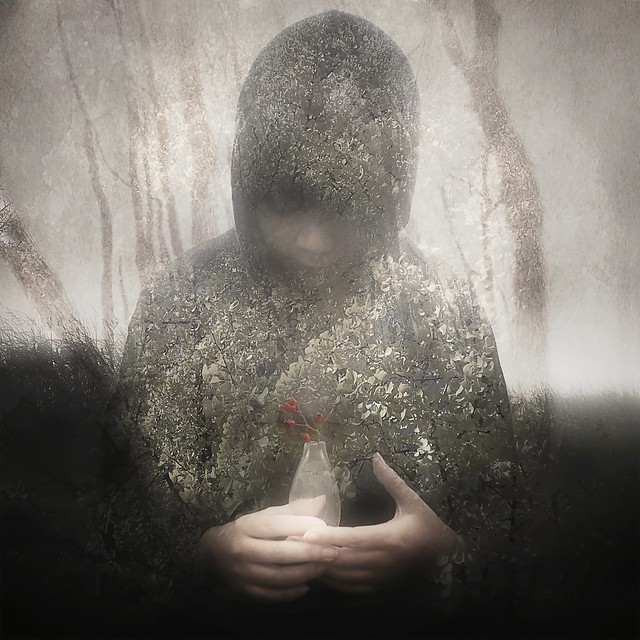 Backstory: By incense of small red fruit, she visualized all the rest from her imagination. This shot was taken in the fall of last year. 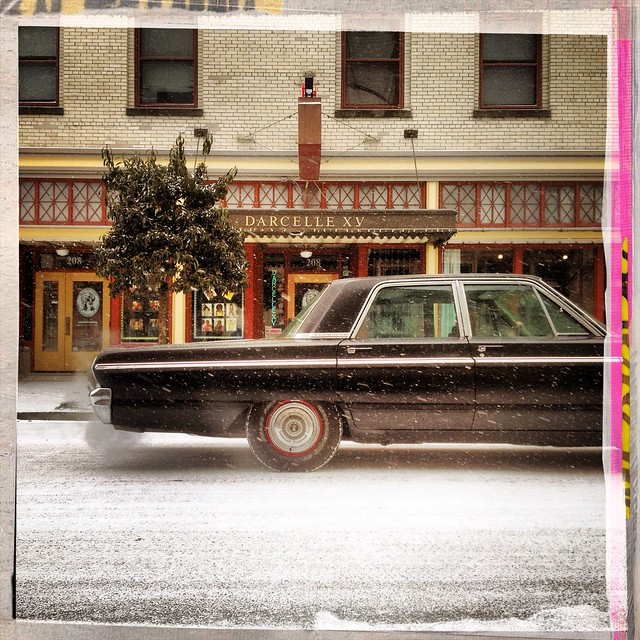 Apps Used: I took this with my iPhone4s using Hipstamatic with the John S lens and the Big Up film. I also used Snapseed to adjust details, structure and contrast.

Backstory: Portland does not usually get very much snow but a couple of weeks ago a big storm moved through very quickly. I was trying to get home before the traffic got crazy but my desire to get some photographs overtook my sensibilities. My camera roll was full so I decided to quickly pull over to delete some photos to free up my camera roll. As I was about to take off, I noticed how beautiful the light was becoming with the snow and then this amazing old car came into view. I quickly opened Hipstamatic and shot with the combination that it opened on. I really like how the Big Up film puts the random tape border on the images — sometimes it works better than others though! 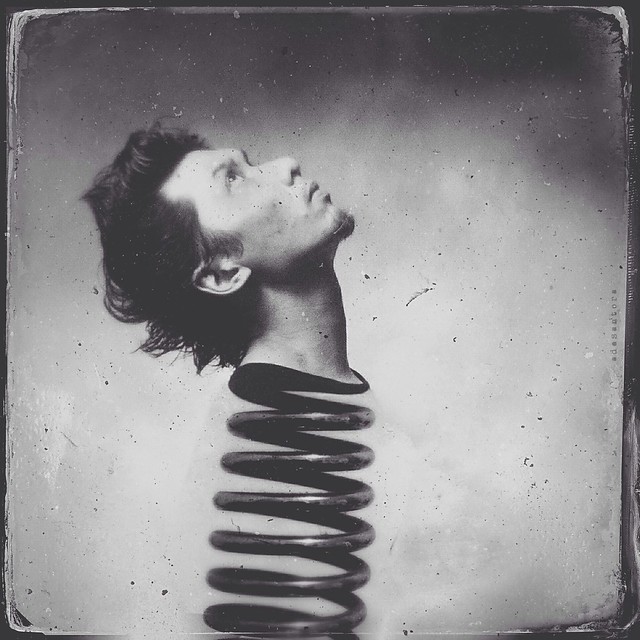 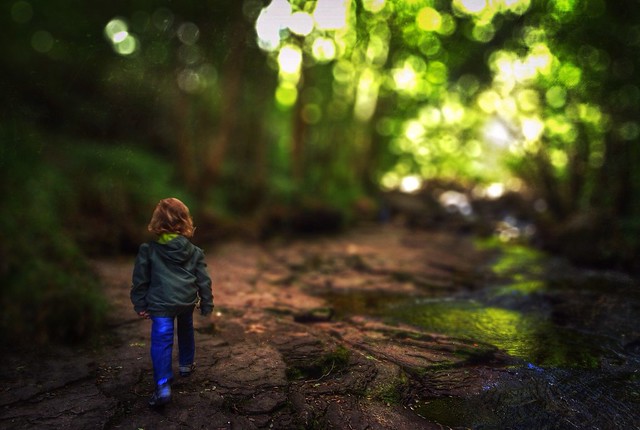 Walk To The Waterfall by Paul Moore

Apps used: I used Tadaa SLR for the depth of field and bokeh effect. I only picked it up last week. It’s a great app but there is a fairly major drawback. It only saves the edited image in low res. I use Big Photo to try and restore photos edited with Tadaa SLR back to close to full res. This isn’t always successful but it worked here.

Backstory: This photo was taken on a family walk to a waterfall (hence the title) in a small mountain range near my home called the Slieve Blooms. To get to the waterfall there is a nice walk along a stream through the woods. My aim with this photo was just to capture the beauty of the surroundings. My son had gone on a little ahead of us and the light was streaming in through the trees on the right. A very tranquil scene.

This photo had been on my phone for a while and I had tried other edits on it to try and enhance the light coming through the trees but it was only when I used Tadaa SLR that the image came alive. The bokeh effect almost adds a fantasy feel to the photo. 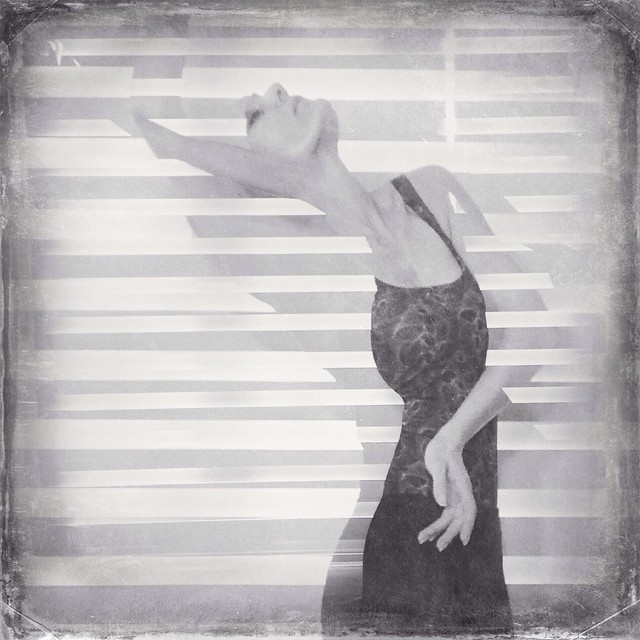 let it go…# dancing with my self series by juta jazz

Apps Used: I did the blending of few images with Leonardo, after that added the black and white effects with Alt Photo and for the final touch I used the Mextures app.

Backstory: I had an idea to do series “dancing with my self”, because I was studied the dance and some times I feel it need to be expressed some how. I did a lot of shots with my iPad app 645 PRO Mk II, and was working with few of them. Because my works always based on the emotional state of the moment/ day, one day I pick up from my library few images, with the intention to express my need to release some thoughts/ feelings I was carry in me.

Apps Used: I used Picture Show for the portrait because I enjoy the diversity of instantaneous effects & in particular the ‘light’ and ‘noise’ features within the app

Backstory: I shoot approximately 10 frames in the one ‘session’ to maintain a sense of spontaneity. I own an iPhone 4 (this is all thats available to me at the moment), so I have the challenge of creating a portrait thats well composed working within the parameters of the iPhone. 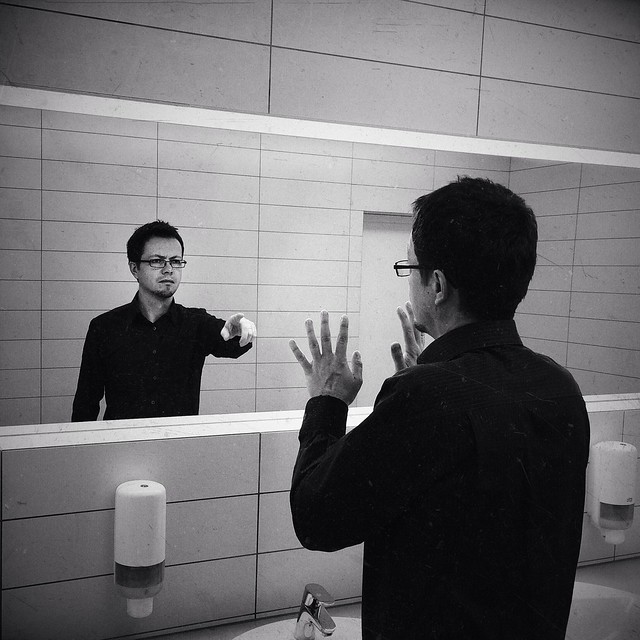 It’s YOU! Again! by Michał Koralewski

Backstory: Well, there is no background story behind this photo. I just wanted to try some simple photo blending. I took several photos, chose two best and merged them with a help of Image Blender app.

I will wade out… by Karla Da Silva 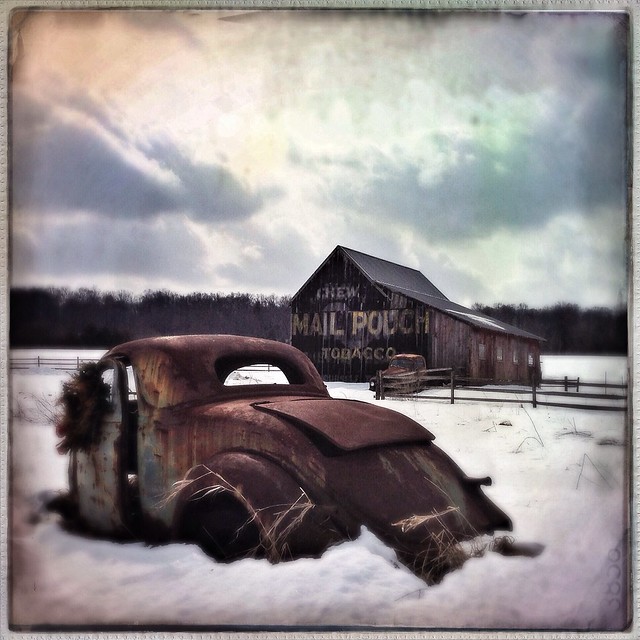 Backstory: I had happened to see another photo of this barn on Flickr and I knew the location was local and wanted to see what I could do with it.

I took a stand-alone shot at first and then noticed a rusty car in the nearby field. The rusty car by itself was interesting but I decided to include the car as a foreground to the barn to add to the mood and feel of the image. 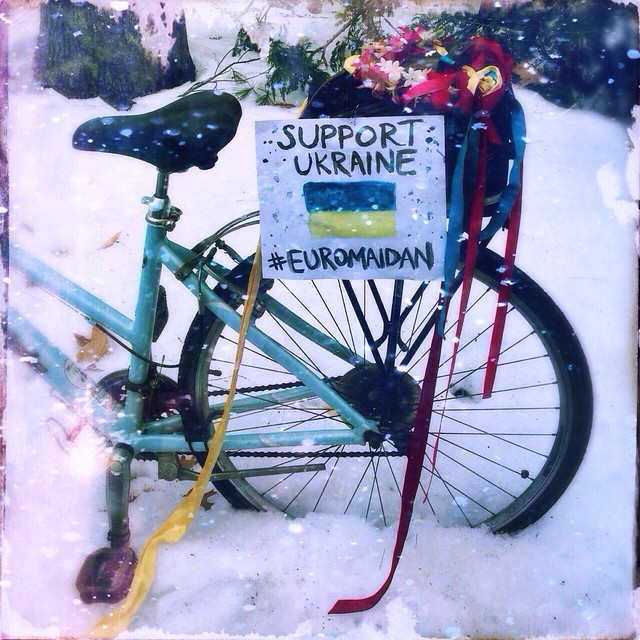 Backstory: Being locked in what seems like a nonstop barrage of snow and cold, I had a tiny break where snow melted enough to go for a bike ride. Being of Ukrainian/Polish descent, I have been keeping watch on the events unfolding in Ukraine and was saddened by the turn the protests had taken. I decided to show some kind of support from across the globe and felt the least I could do was try to inform people what was happening in best way I knew how. I have been posting pictures here and there with links on how to support the Euromaidan cause. I have been particularly moved that among all the chaos, these people still try to add beauty, my reason for using the flower crown as a symbol. As events continue to unfold, I will try to show support in the little ways I can, and I hope they find their efforts are not in vain.

Backstory: On one of our recent weekend excursions around Southern California, I chose the mission at San Juan Capistrano because I had fond memories of going there as a child and hadn’t returned since. The mission is set up to recreate life as it was when Fr. Serra lived there, with many small rooms throughout furnished as they might have been in earlier years.

I was captivated by the light streaming in through this window. The image was shot with the native camera on my iPhone 5s. I edited it first with Snapseed to tune the Image and convert it to black and white. I then took it into Tangled FX where I have some very subtle custom formulas saved. I like what Tangled FX does when used in this less extreme fashion. I enhanced the light coming in through the window with the Lenslight app. I used Sketch Club to blend the Lenslight version with the Tangled FX version so I would not overdue the amount of “rays” coming through the window.

I chose this particular angle to shoot the photograph because I liked how the shadows on the wall slope in almost the same angle as the votive candles in the foreground – kind of pointing toward the artwork of Our Lady of Guadalupe.

With the black and white tones and subdued lighting I hoped to convey the calm and tranquility of the mission. I hope the viewer will feel some of what I experienced that day. 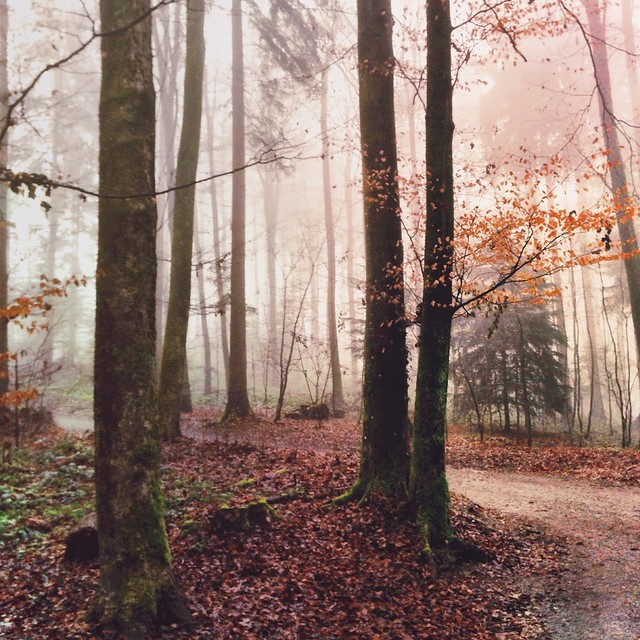 Orlok Redux by Pu the Owl

Backstory: This started as a regular cat picture and ended as a Nosferatu tribute. Even though Murnau’s revised version of Dracula is not one of my favorite German expressionist movies — nor it is Murnau’s most accomplished work in my opinion — I have a soft spot for Max Schreck’s Orlok as a proto-pop icon. The original photo was taken with iPhone’s default Camera, a rare occurrence for me. In Handy Photo I did a lot of cloning and re-framing, taking out the actual cat and leaving only part of its shadow — the head — and the background, which I blurred a bit in Big Lens. I created the new arms with the claws and part of the body in Sketch Club, importing then the newly drawn shadow as a separate layer in Image Blender to be merged with cat head and background. I added texturing and haze in Mextures and Infinicam and finally tuned the black and white in Vsco Cam.