The first image by Scott Woodward steals the show – a great shot of his young niece playing guitar and singing in the golden light of morning, captured artfully in black & white. In fact, the next image is in very expressive b&w (by David DeNagel), and then we gradually widen the color palette with Ade Santora’s fabulous Hid Behind and following by another glorious abstract/still-life from hanakai2001

Each of the shots selected this week is exceptional in how it conveys a mood, concept, moment or stunning real life contemplative aside – we hope you enjoy them!

Backstory: I live in Singapore, but every summer my wife and I return to Canada to see our families and our four young nieces. This is a photograph of my 8-year-old niece, Brooke, that I made in her family home in Caledonia, Ontario last month. One morning Brooke and her older sister, Paige, decided to take turns playing a song for me on their guitar. I listened intently to their performances while using the beautiful morning light streaming in the window to make a few quick photographs on my iPhone as they strummed and sang away.

As in summers past, on this recent visit to Canada, I abandoned my DSLR and instead carried my iPhone with me everywhere I went with the girls, making snapshots of the experiences we shared together: leaping off the high diving board, skimming across the slip ‘n slide, climbing maple trees, dancing in the living room, cartwheeling across the front lawn and floating in the backyard pool… All of these photographs form a document of those times we spent together, rendered how I chose to witness them — inquisitively, spontaneously and lovingly — through the tiny lens of my iPhone camera.

These girls are still too young to understand how ephemeral these times are. Ironically, it is their innocence that provides me the perspective and desire to document, capture and preserve a handful of the fleeting moments that make up the endless summers of their childhood.

Backstory: The roses were from my garden. The summer heat and beetles had taken a toll on many of the flowers. These surviving blossoms seemed full yet worn and huddled together as in a self protecting cordon. I shot the image in 6×6 ;then I processed in Vscocam with the X1 black & white preset which heightened the sense of the ephemeral and fragile nature of the subject. 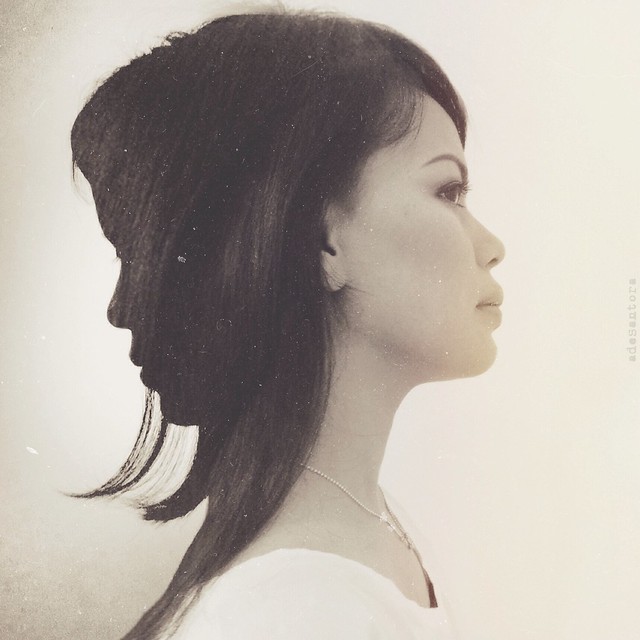 Hid Behind by Ade Santora

Backstory: One day I visited my friend’s store to see the life and art exhibition. I was so excited the complexes of art and life. this is one of them. when I take this, I payed attention to use the space effectively. so I put a plant on the bottom left and took it. this is a simple shot, so I added a little bit of graphic effect with decim8 and decosketch 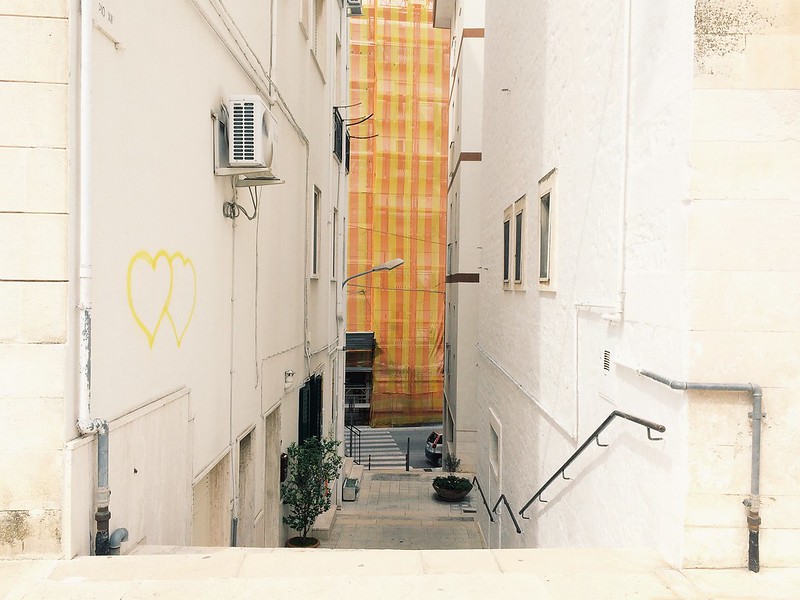 Apps used: Processed with VSCOcam with g3 preset and a tad more luminosity.

Backstory: This is a work about abuse. At one point in my life, I was abused emotionally. I don’t really want to say anything further about that situation. I know I never want to endure it again. The thing about it is that it is insidious. It doesn’t have the outward signals to others that physical abuse has; it is invisible to others. And it is easy to start to feel that there is no way out, that somehow the person is “right” about you, and to just start to shut away inside your head more and more, as a way to escape the onslaught. So the scars remain, but no one knows about them but the person that has them. I hope that others can feel the emotion behind the image; if they do, I will have succeeded.

For this work, I used iPhone 5s camera to shoot a self portrait. After that, I went into Mextures for it’s ability to change the “feel” of the image, then I brought it onto the iPad Mini Retina and did extensive painting using iColorama. There were about 40 saved states of the image as I worked to getting it to where I wanted it, which was a push pull of adding in, editing out, and blending.

Backstory: I took this early one morning on my way back home from a mountain bike ride. I noticed the cows being rounded up for milking on the horizon and the strange cloud formation so took a shot.

It was taken using Vividhdr in dramatic mode and a weak setting in noiseware to clean the grainy look.

Apps used: Sharpened and cropped in Snapseed. Masking in Filterstorm.

Backstory: The shot kind of announced itself – the colour bands in the road, the width of the road at that point and the ranges in the distance all combined to tell me to stop and shoot. I’m travelling the Australian outback at the moment and you can’t help but be drawn to a cinematic approach, hence the iPhone pano shot used here. Further cropping emphasised the widescreen nature of this spot – some 50 km west of Australia’s hottest town, Marble Bar. 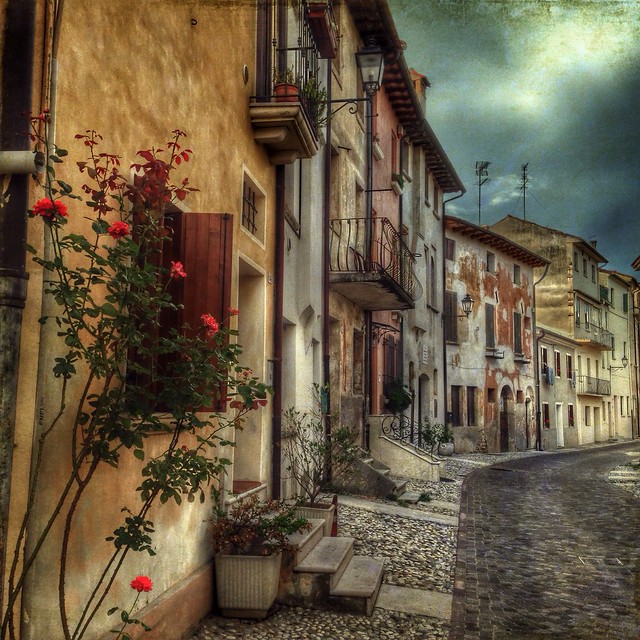 Which way from here? by Tomaso Belloni

Backstory: A beautiful street in the historical center of an Italian town is irresistible when you have a camera with you. From there to this shot it was very natural: the other side of the street was not as beautiful, the street bent gracefully to the side, nobody was in sight, the roses provided a touch or bright color, a storm was approaching (although it never came). You don’t know what lies at the end of the road nor how stormy it will be, but how can you not follow the road?

I shot the picture with the iPhone5 default camera. Then I imported it into Snapseed for some sharpening and increase of dynamic range, then added texture, but cannot remember which app I used, probably Stackables. 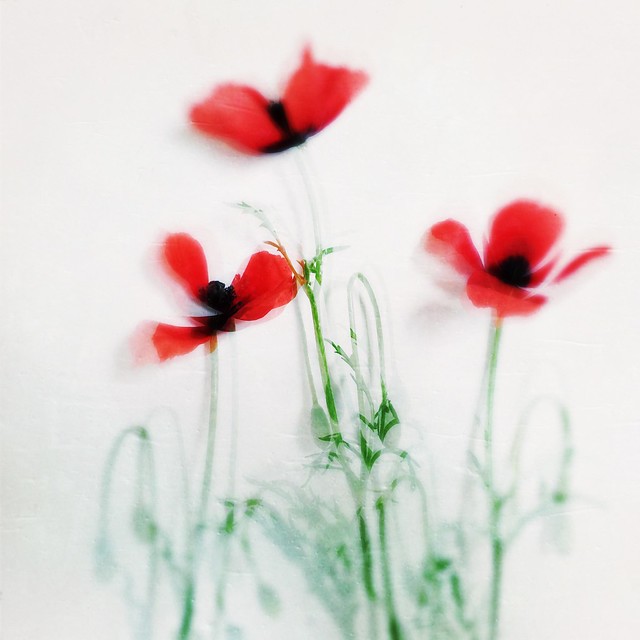 Backstory: Poppies are one of my most loved subjects, so over the years I tried many variations in capturing them. For this picture I picked some field poppies and took them inside. I arranged them in a vase in front of a white wall and took pictures from all different angles and with different Hipstamatic-Filters. Then I remembered the Multiple Exposure Kit and tried that one. And it did a great job in expressing the lightness and vulnerability of these beauties. This picture is the pure outcome of Hipstamatic, no additional apps where used. 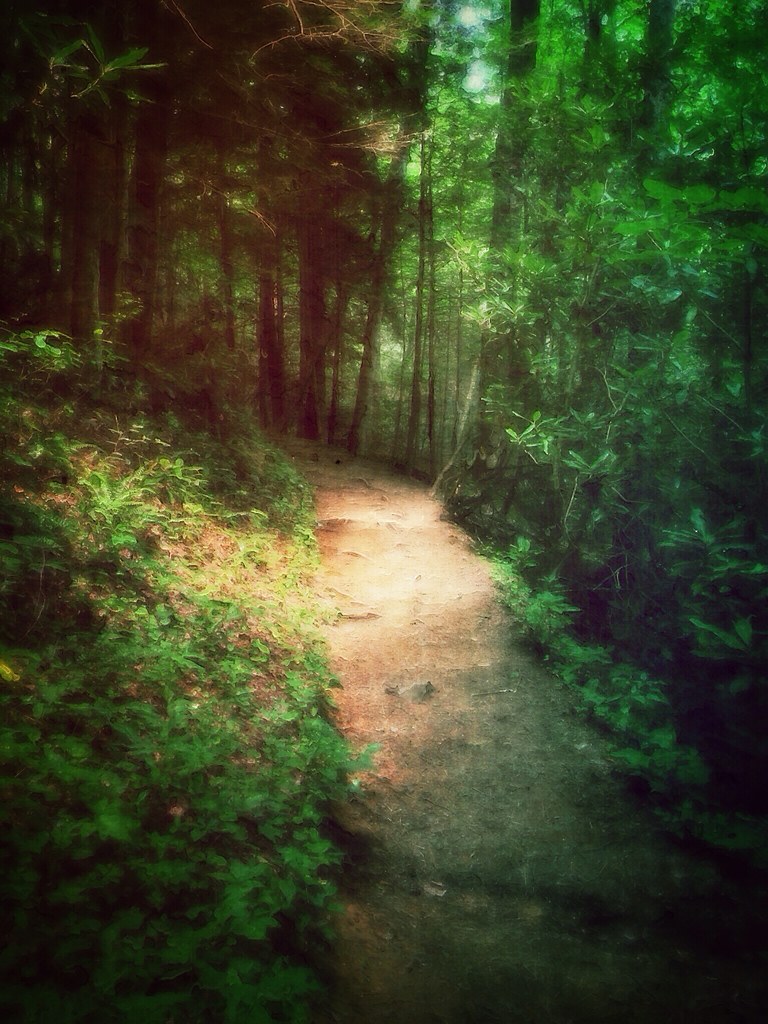 Backstory: We are spending a week in the Smoky Mountains and I took this photo on our first hike – uphill to Hen Wallow Falls. Away from my familiar landscape of the Eastern Shore of Maryland, I had some trouble conceiving images here in Tennessee, despite the awesomeness of the beautiful terrain. On this particular hike, I started looking for patches of light coming through the trees and hitting the trail ahead of me. This shot was the only “keeper” of the day. I first did some general tuning in Snapseed (brightness, saturation, warmth.) Then, I ran the image through a few filters in Glaze, and blended those back with the original image. This seemed to soften the edges of the leaves nicely, and give the whole image a more relaxed feeling. Finally, I gave the whole image one layer of grunge texture from the Mextures app as a finishing touch. 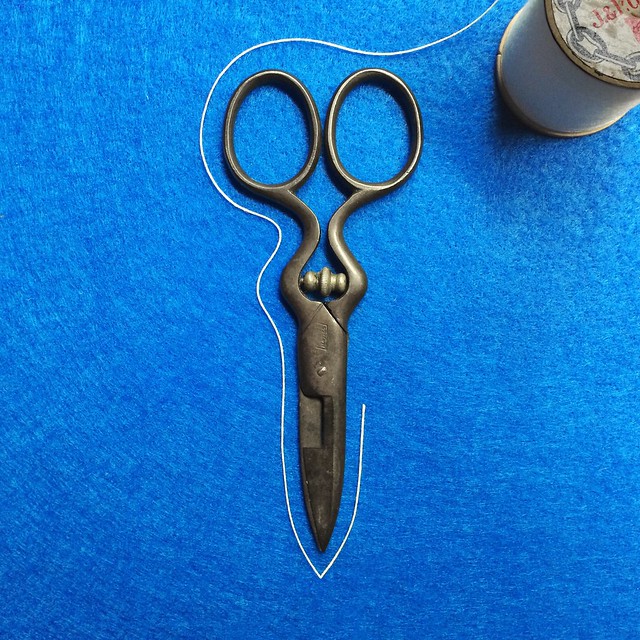 Backstory: This image is the second in a series comprised of objects from a mystery box loaned to me by a friend. (locket and book were #1). in addition to hammers and keys, scissors are amongst my favorite objects. and this is the sexiest pair I’ve ever seen. The scissors and thread were shot on blue felt with ProCamera7, and edited using Snapseed, ColorManager, Retouch, & Superimpose.