Here at Apps Uncovered our choices tend to lean towards the less saturated, often black and white and muted tones of iPhone photography. Something about those muted tones and look of old photography stirs something in us, often a feeling of nostalgia and a sense of mystery. With black and white photography, the distractions of colour disappear and we are left to consider the forms of the image. With so many app filters on the market, offering the look and feel of every era that ever existed, the ability to instantly colour-up and abstract any photo, the choices can be overwhelming and are often executed with disastrous results. Colour choices offer a chance to say what we want in an image, the colours should spring from the content and I advise you to choose wisely. In this week’s Apps Uncovered, I have made my selections loosely based on great use of colour. In the lead image, a striking street photo by Laura Peishl, the main subjects are unusually dressed for this era, reminiscent of perhaps the 60s and Laura has cleverly used bold colours to enhance this feel. The striking yellow road markings add a great dynamic to the picture tying in nicely with the woman’t yellow top and the old looking brown buildings in the background add to the story and create a perfect colour contrast to the yellow. I hope you enjoy these (mostly) colour selections where I think each artist has given great thought to their use of colour.

The Space Between Them/ Series/ 2 by Laura Peischl

BackstoryChina Town, San Francisco. I saw this two having quite a loud argument and was intrigued, as they looked pretty elegant, not the type of people shouting at each other on the street. Then, she said something, got her phone out and they crossed the street. 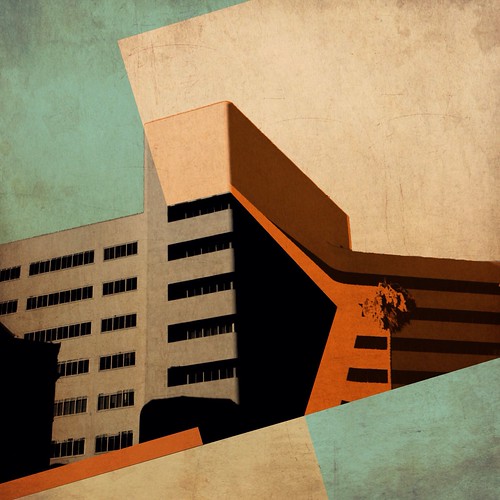 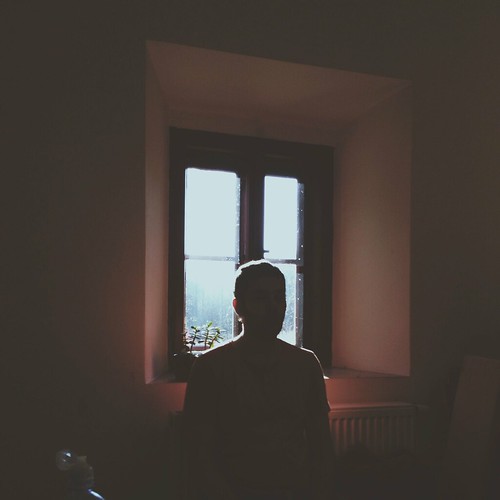 waiting for winter by Martin Slavíček,

Apps used: Taken with the iPhone. Processed with VSCOcam with m3 preset. 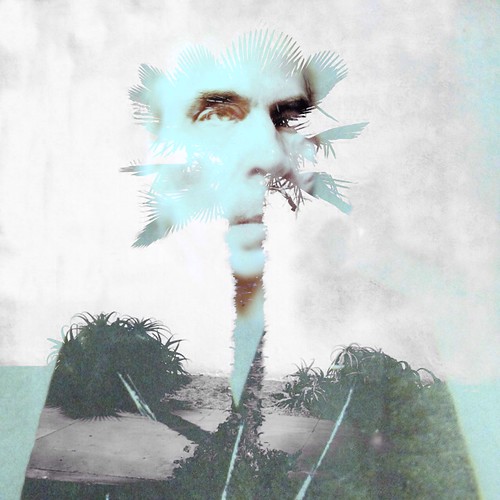 Backstory: This image is made up of three separate photos. A b&w Hipstamatic shot of a palm tree and plants in front of a white wall, a Hipstamatic double exposure self-portrait and a shot of a newspaper photo of Gavrilo Princip, the Bosnian Serb who in 1914 assassinated Archduke Franz Ferdinand, thus precipitating the First World War.

I opened the b&w palm tree photo in Filterstorm where I used the clone tool to remove several windows and architectural details in order to simplify the background.

I brought the self-portrait and the photo of Princip into Image Blender where I replaced his head with my own. Then into PhotoCopier where I used the “Tanguy” filter in “Painting” to give the blue-green tone.
I then opened this image along with the b&w photo of the palm tree in Image Blender. I chose the blend mode “Lighter” which gave me the final image. 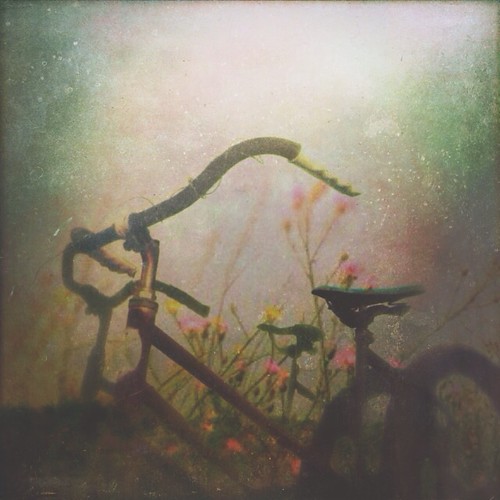 Apps used: Hipstamatic/Oggl, Coowl and Mextures on iPhone
Backstory: I’ll admit I really didn’t like the base shot taken with Hipstamatic/Oggl of an abandoned bicycle I came across. I tried to do something with it a few times and never cared for the result. I was working on finding photos to morph together in Coowl app, and decided to finally try to put this shot to good use. I paired it with a wildflower pic and it took on a whole new life. I used Mextures to make it look like an analogue double exposure photograph. I actually ran it through twice until I was happy with texture and tone. I’m feeling a bit nostalgic as I’m an avid bike rider and very soon the weather will curtail my cycling. I thought this was a nice way to mark the end of a riding season.

Apps used: Snapseed, VSCO Cam
Backstory: This was taken at Cannon Beach. This particular was really rainy and the wind was incredibly powerful (reports were saying that the wind was between 65-75mph). So I thought it would be fun to have my friend take off his red poncho and do a big jump in the air while letting the wind whip the poncho in the air. This was the result. 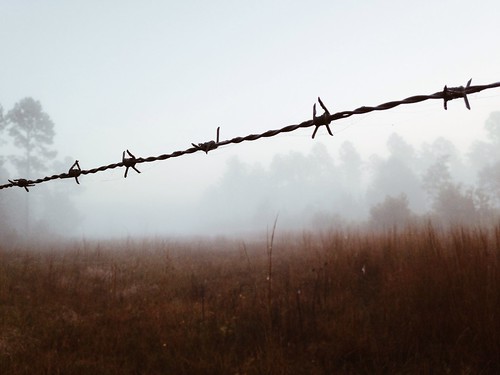 Apps used: Camera+ and VSCOCam
Backstory: This photo was taken in a very obscure back road one foggy morning on the way into work. I was amazed by this seemingly common area and how the atmosphere changed with the hanging moisture. I found this stubborn old barbed wire line where a full fence used to be, the last remaining barrier between one side and the other. I used Camera+ to focus on the barbed wire and imported into VSCOCam for the tones and texture. 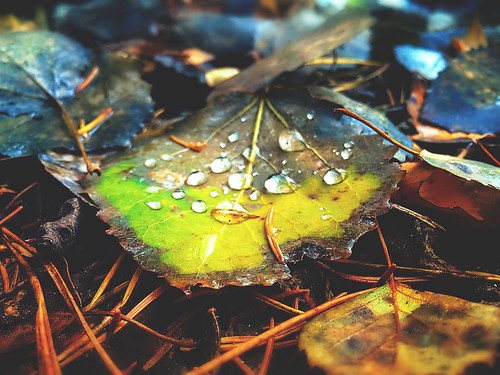 Apps used:
Backstory: The shot was made on early morning, and the idea was to capture the colors of autumn. But after processing with Instaflash Pro (colors vibrance, tilt shift and saturation and hue edit) some leaves in the background became blue. I was satisfied with the result, so decided to leave it as it is. I forgot my macro lenses at home that morning, so the picture was taken with Camera+. And thats it. No more magic here 🙂 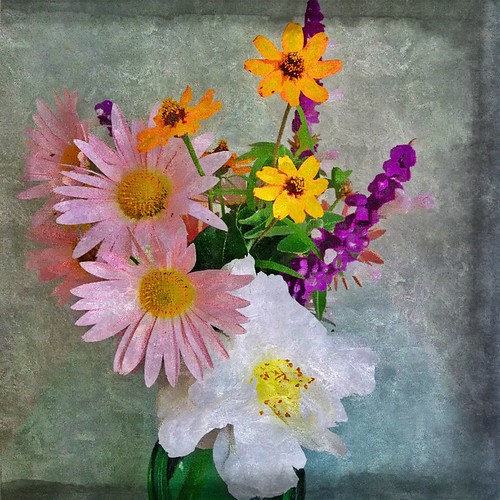 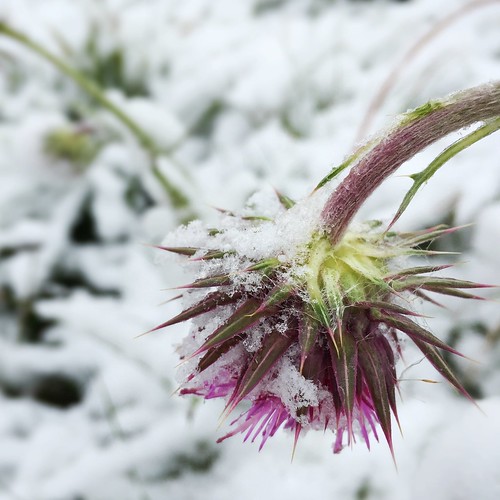 Nodding Thistle in the first snow of winter by Mark Whitcombe

Apps used: Pureshot: manual focus peaking, manual exposure peaking and adjustment
Snapseed: cropping, ambiance, tilt-shift
Backstory: I was planting trees in the first snows of winter, kneeling down to tamp soil, and I glanced to my side to see this beauty. The rich purples, the webby hairs, and the bent head of this Nodding Thistle called to me. I took off my muddy gloves, wiped my grubby hands, pulled out my iPhone 6+ and bent even farther down to emphasize the heavy snow in the background. I used my favourite camera, Pureshot, to focus on the thistle, adjusting the exposure to capture the purples without blowing out the whites. In Snapseed, I tightened my crop, slightly touched up the midtones, and then blurred the background.

I admire this resilience of life, determinedly carrying on despite hardship — and ultimately pulling through. This thistle will be that much stronger next year for having kept living right to this onset of winter. May I achieve the same! 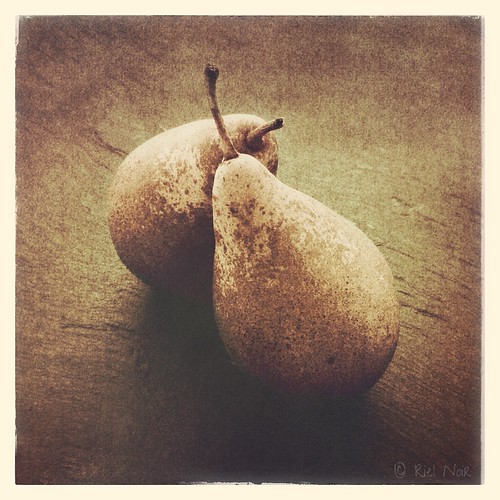 Apps used: 645 Pro was my choice of camera apps as I wanted a large file to work with and clear detail.
Editing apps included SnapSeed, Art Studio, iColorama, PhotoCopier and Stackables.
Apps used: Recently, for the second time, I participated in the 5 day B&W/Monotone challenge on facebook. I have found that this has inspired me to create a more traditional style of photograph. During the challenge I photographed 3 pears and enjoyed the process and was pleased with the result. The image left me with a desire to photograph two pears, but, this time in colour. I wanted the editing to produce a quiet image that descibed both the form and a relationship that involves two.

Although I wanted the image to be in colour, (first I stripped it down to B&W, adding colour during the editing process) I did not want it to be loud, but, gentle.
The light was slightly over cast that day, which was perfect for the look I wanted to achieve. The pears were set up on slate which has a great texture. The resulting image, to my eyes, exhibits a quiet intimacy. 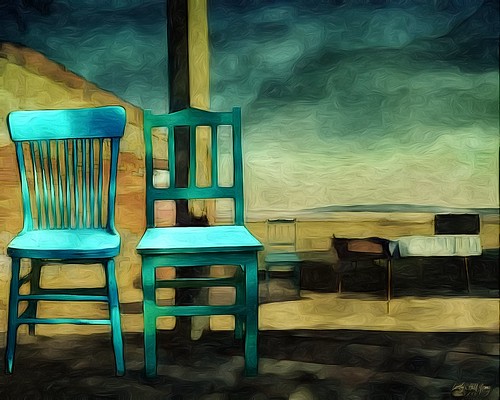 Apps used: Colorama
Backstory:This is an iPad painting, made with a beta version of iColorama. I used some of my images, and one of Gianluca’s as sources to build this. Made for the Collaboration page on Facebook.