I’m often influenced by the first eight or ten images I see as I look through our Apps Uncovered Flickr page – and if they suggest a viable trend, I’ll keep selecting all the images that appeal to me, but if there are more than I can include in a single set, I will pare the group down to those around a theme. This week, the theme came down to seeing the world in pastel and/or in a monochromatic (i.e., single/dominant) color.

This week’s lead artwork, “I love you in a place where there’s no space or time” by lorenka campos really tends a bit more toward pop art colors than pastels – but hey, I get to make the rules, so I get to break them too. Several of the dominant colors are pastels, I can rationalize, and the treatment of the subject (figure, flower and bird) just makes you smile to look at it. 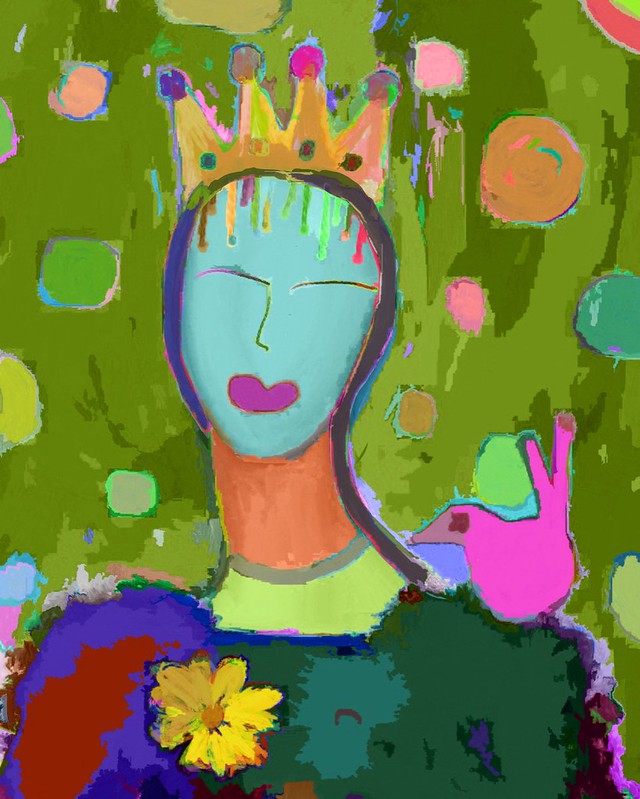 Apps used: Procreate and iColorama
Backstory: The image is all hand drawn in the iPhone Procreate Pocket app. One of my favorite artists is Modigliani, and I know I had him in mind when starting this, but it ended up somewhere else, as usual. Once I start, I just let it go where it takes me. The end image reminded me of a song lyric about loving someone beyond space and time. 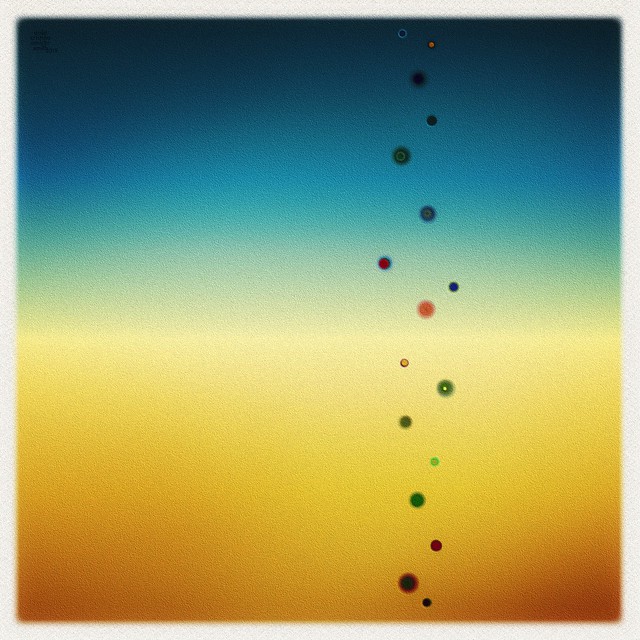 “a memory of happiness” by oola cristina

Apps used: Stackables, Hipstamatic, iColorama, Pixelmator
Backstory: Lately, I’ve been feeling pulled to create pieces that are simple and have a spacious feel but are rich in color. This image is the third of what is currently a four image series. All are minimal abstract pieces using gradients and dots to create a feeling. I’m hoping there’ll be more as I’m very much enjoying the process of doing them and what they evoke. This piece reminds me of some of my childhood memories of being in Japan.
For the background, I used a Stackables filter on white that I then ran through Hipstamatic to get even more vibrant color. I then went into iColorama to brush in the dots, and add grain and texture. Back into Hipstamatic for the border and then into Pixelmator to change the placement of two of the dots. 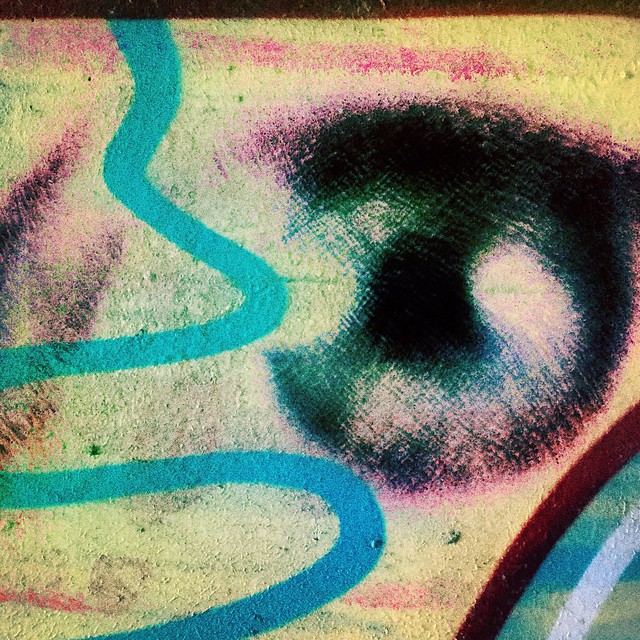 Apps used: Icolorama, SuperimposeX, Hipstamatic and Snapseed. Shot with my iPhone6
Backstory: A 365 project is curse and a blessing for me. The curse is that I have to take an image and make something worth looking at, the blessing is that I have to finished it. I don’t always make the best last minute decisions, but at least I am productive. In this case I pointed my iPhone to my eye and took several shots. I selected one and worked it in Icolorama, I blended it with a graffiti image with a wall structure in SuperimposeX, shuffled it through Hipstamatic until I was satisfied and did some final tweaking in Snapseed. 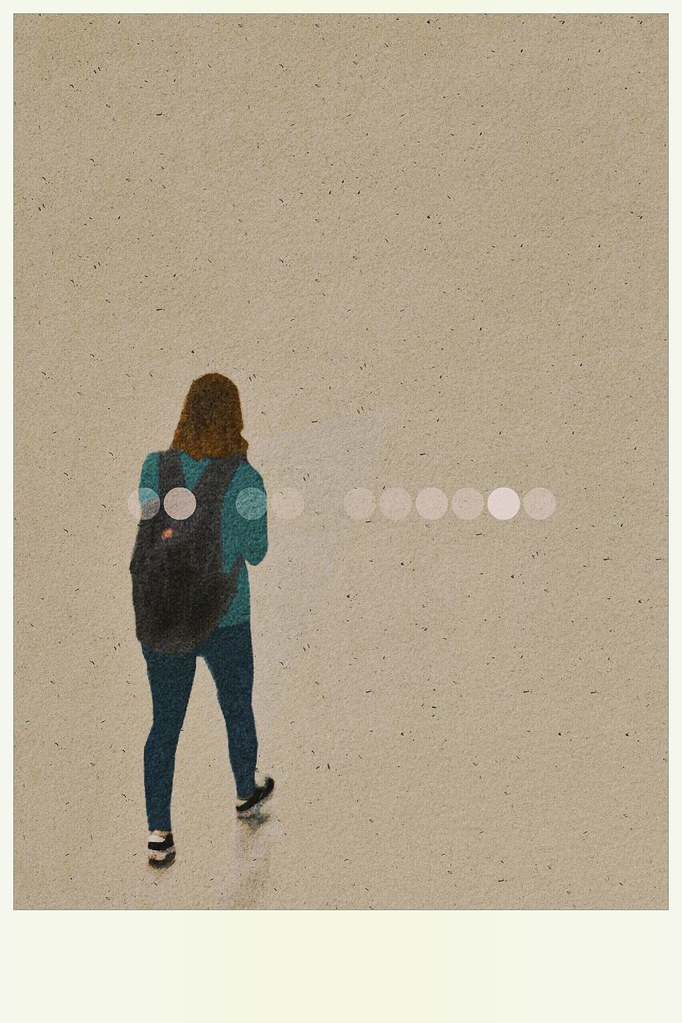 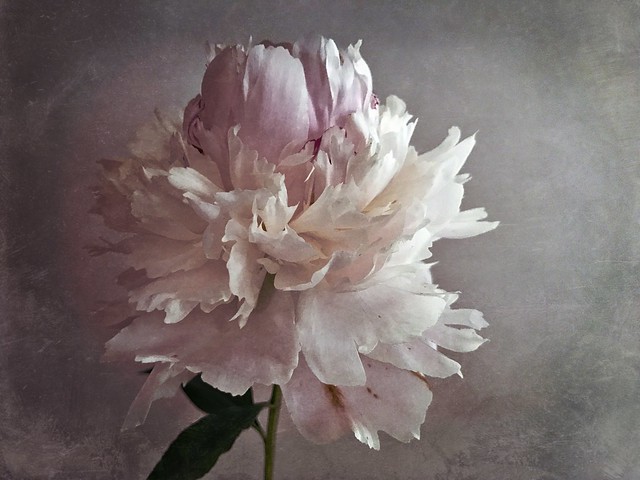 Apps used and backstory: This was one of my favorite images from several years ago. It was taken early , one October morning near a local lake. A soft breeze moved across the landscape. There was a light mist that gave a kind of diaphanous glow to the rising sun; everything was muted, but with that soft Autumn coloration that called to you even from a distance. The trees, leaves, water, all seemed to blend into the gentle delicacy of a dream. I used , I believe, Snapseed. I may also have added a touch of Mextures.
I made it a point not to excessively use “painterly” apps as I wanted to keep the image in the realm of “straight” photography as much as my sensibility and visualization would permit. 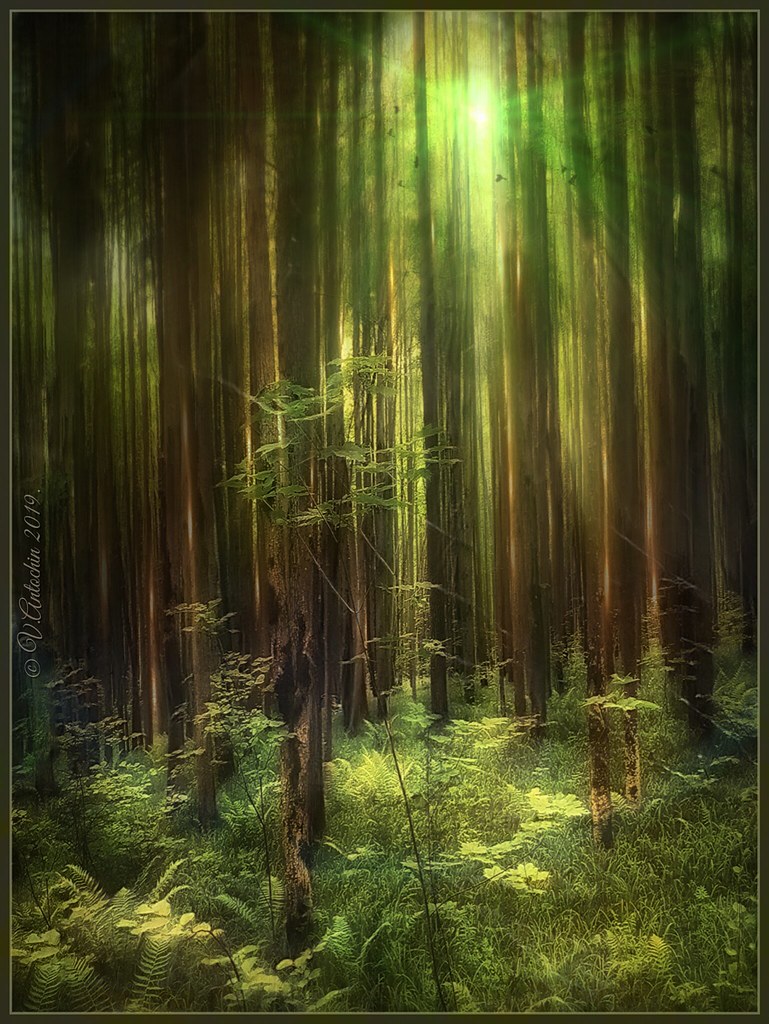 Apps used: Filmed on iPhoneX phone, handled as usual in Snapseed and iColorama.
Backstory: The photo is the result of my morning walk through the forest next to my house. the feeling of a fairy tale did not leave me all the way. 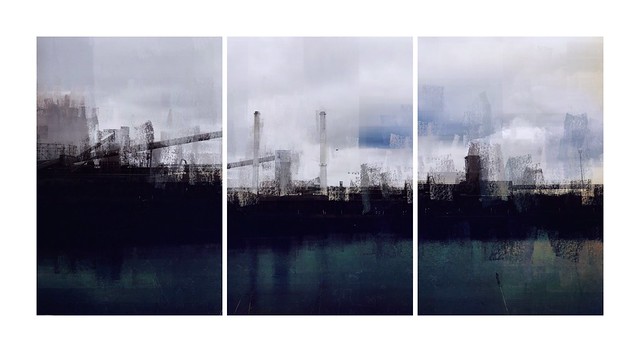 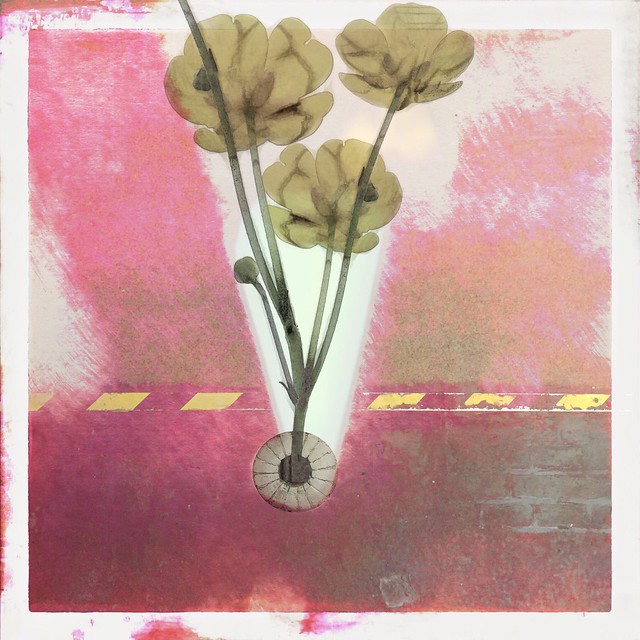 Apps used: Icolorama and SuperimposeX. Shot with my iPhone6
Backstory: Sometimes I have a plan , but most of the time I just start editing an image. And when I am without inspiration, I take a shot without looking and go from there. And that was the case here. The result was a blurry unrecognisable image. In Icolorama I used sketch to give it some lines. Then I took it to SuperimposeX and started blending with my favourite background image. The result was the pink background with the V-shape white area which looked like a vase to me. I added the earlier edited (Icolorama) yellow flowers, some bricks in the background and the tape-like image with matching colours. I do regularly save my images while editing, because I don’t always know when to stop. After this one, five others followed but this was THE one for me. I think I made something out of nothing. 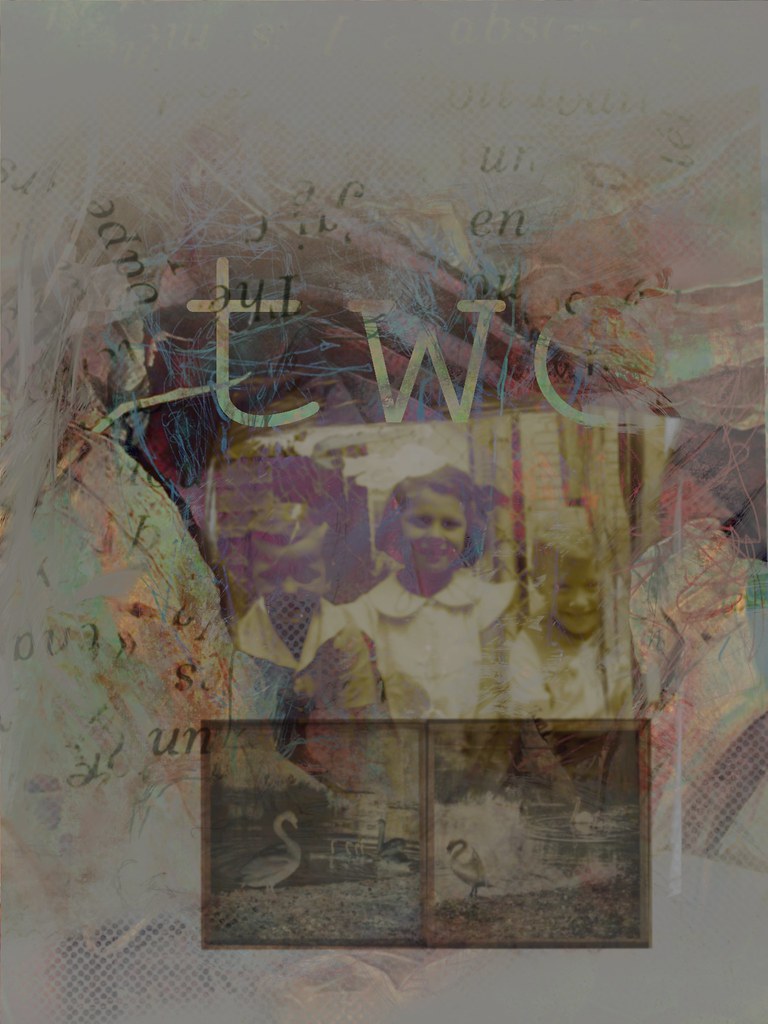 Two one liners by Catherine Caddigan

Apps, Procreate, Superimpose X, Snapseed
Backstory: This image actually started as a collaboration with another artist’s photo, Bradley Pomeroy. The linear quality in his image (dried leaves) inspired me. I had done some live figure drawing on my iPad in Procreate and decided to incorporate some of these line drawings. My inclination is to let the story evolve in an image, so I looked at images I had saved in my camera roll and selected a couple, manipulating sizing, blending etc combining them into the collage. I finally brought this image into Superimpose X for some further enhancement. Lastly give it final adjustments in Snapseed.
I recently heard a musician interviewed, J.S. Ondara, and when asked what a song meant, he said “I don’t know.” He said he just starts with some words and goes from there. It can mean different things to anyone who hears it. That resonated with me. 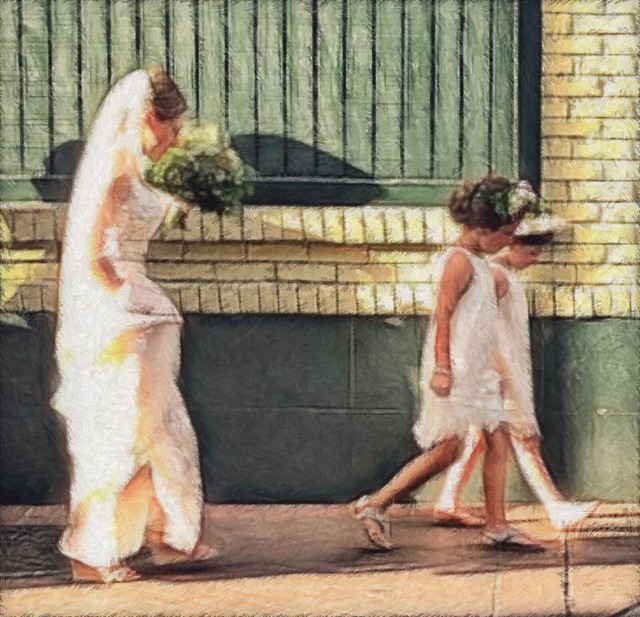 Apps used: Enlight, IColorama.
Backstory: My husband and I took a trip to New Orleans last week where I came upon this small wedding party walking quickly down Conti Street.