This week’s Apps Uncovered explores a broad range of image subjects and genres, spanning street photography to surreal original compositions. Nicolas Decoopman’s Juillet 2015 leads the set with a great found opportunity – young mother with child (wall art), and senior with dog. Having just released our last young one into the wild, we already have the two small dogs to show for the transition. Art imitates life!

Juillet 2015 by Nicolas Decoopman
Apps used: 645 pro camera replacement application on my Iphone 6 and Lightroom for processing black and white
Backstory: I took this picture during a walk on the beach in the town of Dunkerque. I immediately noticed this eve Lady with her dog I liked the resemblance to street art next to her. 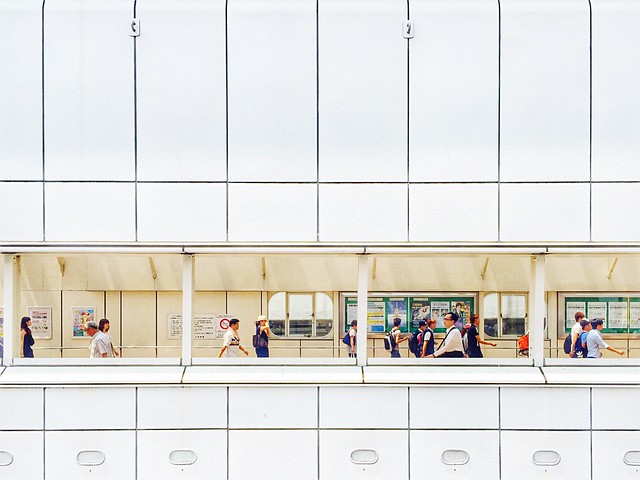 Apps used: Taken and edited with iPhone 6. I used Snapseed to make some minor adjustments and added a filter in Magic Hour.
Backstory: This image was taken on the beach in Fort Bragg in Northern California. I was walking with my daughter and saw this man climbing. I liked the look of a small, solitary figure against the rough rock and sea.

Apps used: Hipstamatic Oggl app, using the Jane Lens and Queen West Film.
Backstory: While taking photos in the streets of Seattle, I came upon a trio of street performers. What interested me as much as the musicians were the people that were watching. As it is so often in street photography, it isn’t until I viewed the photos from the outing later in the day on the computer that I was able to see the details that were captured by the camera, and not with my awareness at the time – here, all the angles of the elbows in particular, including the woman in the far background that I didn’t even notice at the time. 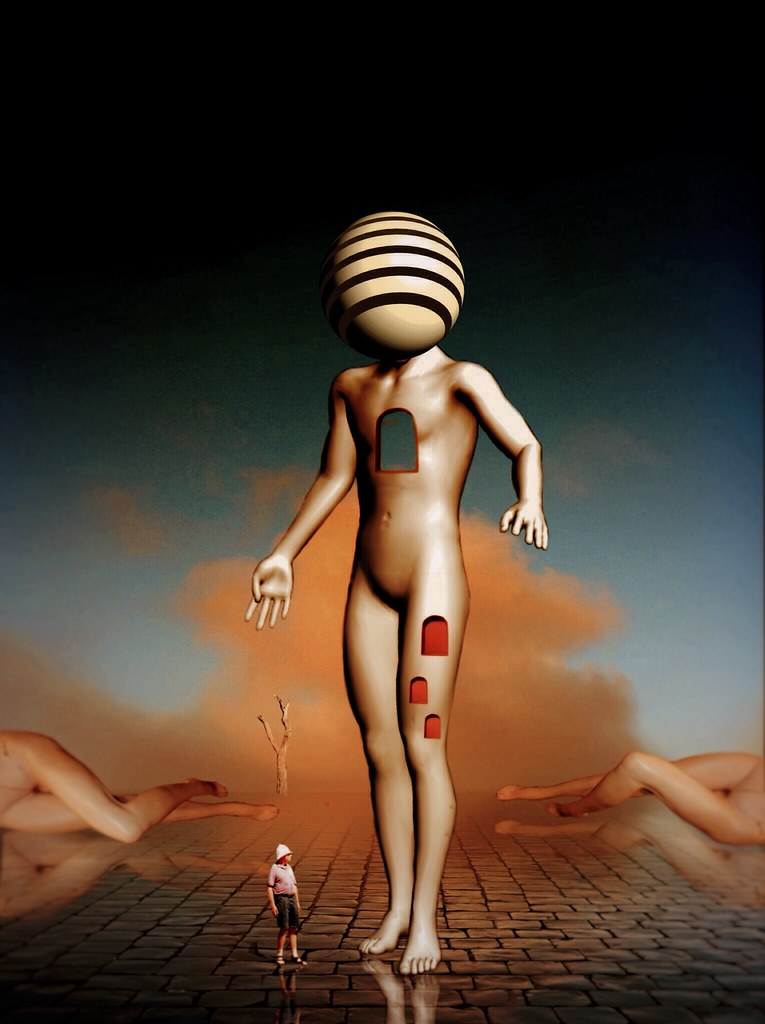 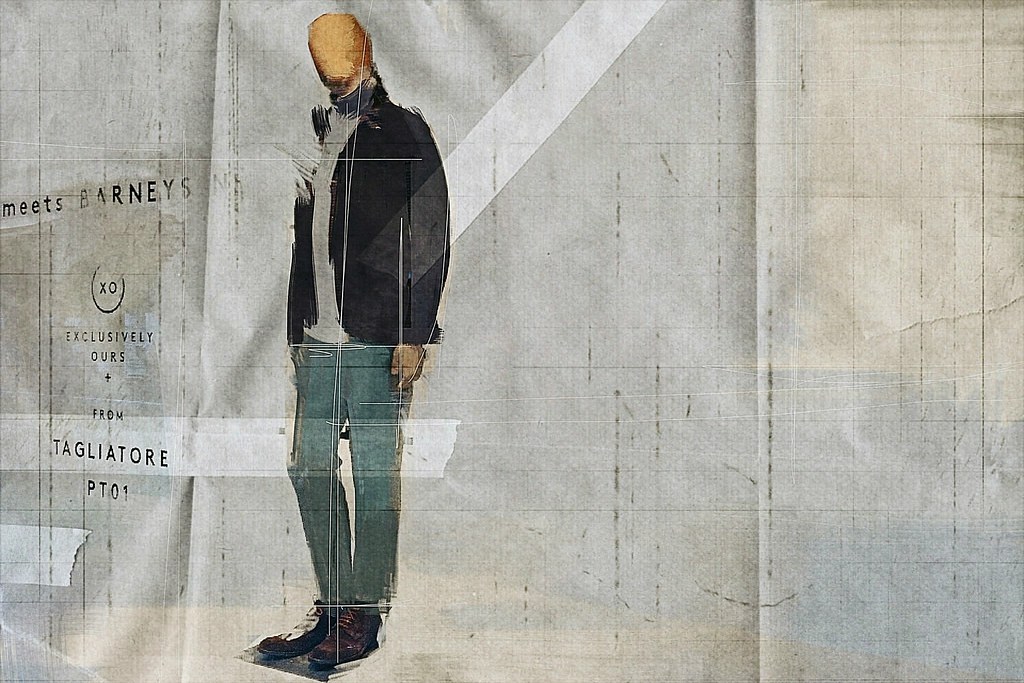 Apps used: iPod touch’s camera / brushes+scratchcam fx+filterstorm+dxp+phototoaster
Backstory: The original photo for this piece was taken last year at Yokohama, Japan. I always am strongly interesting in fashion design, the window display of a designer’s boutique particularly caught my interest. I photographed that and then redesigned with a painting app and some camera apps.

Today, I will be mainly hiding from myself by Brendan Ó Sé
App used: Snapseed 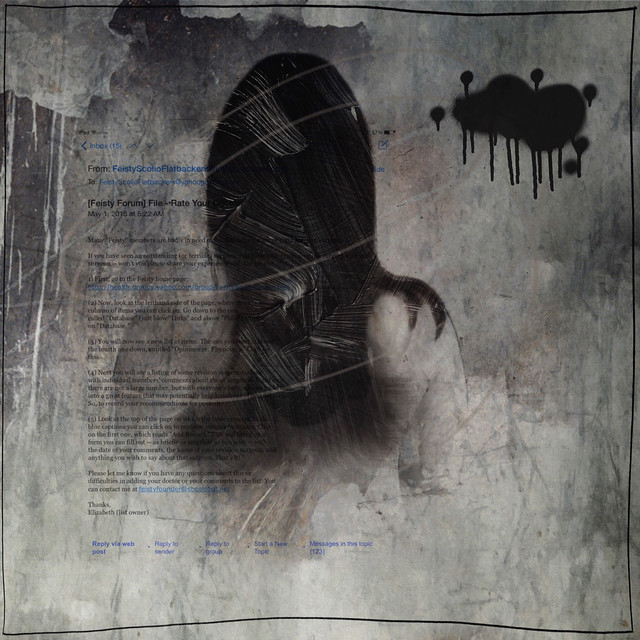 Twisted Sister v2 by before.1st.light
Apps used: procreate, juxtaposer, facetune, and textBlend.
Backstory: This piece, part of a series of two, is highly personal to me. It reflects a physical struggle that I have faced and so far, successfully battled. While the first image in the series represents the confrontation of the battle, this image reflects a navigation through the darkness, while standing tall and walking with grace. A self portrait, I created this image using some of my favorite apps.

Untitled by Geri Centonze
Apps used and backstory: In 2012 I visited the L.A. Mobile Arts Festival. I was impressed by the large floral images. I wanted some flowers to photograph, so this summer I planted dahlia bulbs in my garden and each one has been beautiful. I started with an image of a dahlia in full bloom. I converted it to black and white using Mobile Lightroom and tweaked it a bit with Snapseed. Next, I created my own texture using PhotoToaster, Modern Grunge, iColorama. I applied the texture to the image using Superimpose. The photo was placed on the bottom layer and the texture on the layer above. I applied a circular gradient mask to expose the flower below. I tweaked the image a bit in the Superimpose filter section and it was complete. A similar image in full color is being shown this weekend at the MDAC Summit in Palo Alto, California. It was awarded a place in the Top 10 Photo art images! I actually posted a tutorial on this piece artofmob.blogspot.com/2015/07/create-your-own-textures-part-ii.html 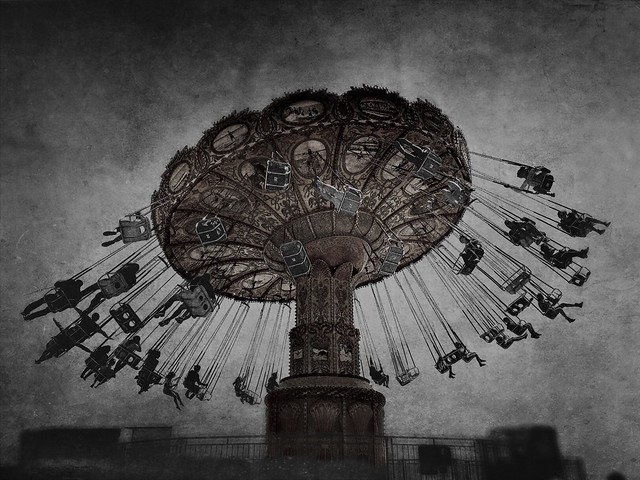 Apps used: This photo was shot with my iPhone 6 native camera. The photo was edited using a saved formula in Stackables. The blur effect and the dodge/burn effect were done using PhotoToaster. The final color effect was done using Superimpose
Backstory: Last year the kids and I visited the Santa Cruz Beach Boardwalk in Santa Cruz, California. We had a great day going on all of the vintage rides and taking hundreds of photos. I had almost forgotten about the photos until recently. I was going through my camera roll and I found them. This one in particular stood out so, I started editing with no real goal – just experimenting. I had never thought of using Superimpose for a “Color Splash” effect. But it worked great and it is much more subtle than my dedicated color effect app. 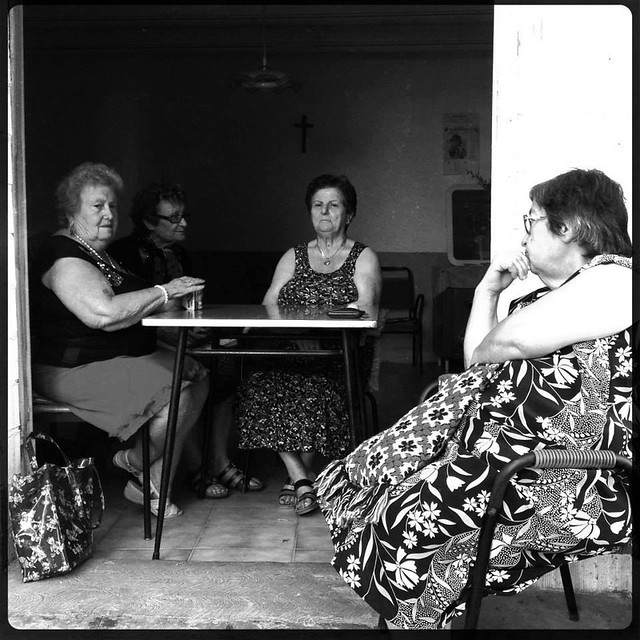 Playing cards, watching the street by Michaela Meerkatz
Apps used: Hipstamatic – I don’t know remember the combo I used, the film is Rock BW-11 but I’m not sure about the lens. Watts? G2?
Backstory: Nidastore is a tiny little village near where I live in the Le Marche region in Central Italy. On a hot summer evening these ladies had opened the doors of a room on the ground floor to enjoy some fresh air. They stayed half in and half outside playing cards. 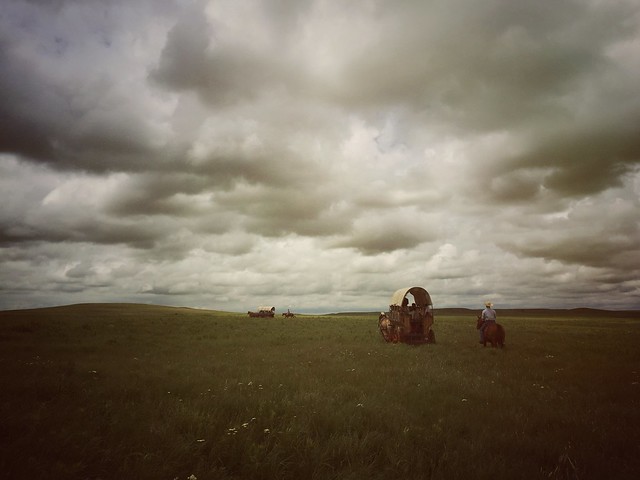 Symphony in the Flint Hills – Wagons Ho! by Wayne Greer

Apps used: Pro Camera and Snapseed
Backstory: This was the last in a series of photos taken at the Symphony in the Flint Hills , an annual event held in this beautiful region of Kansas. This year it was at the National Tallgrass Prairie Preserve. I had a couple of prints up for auction , so I was in a tent for most of the day, meeting people. I managed to sneak out just as a group of covered wagons were getting ready to head out. These were actual ranchers, cattlemen and cowboys.

Day 210 – History is not Destiny! by Armineh Hovanesian

Apps used: The shot was taken with my iPhone6, using Hipstamatic / double exposure (Mark Lens and C-Type Plate Film).
Backstory: I started doing a 365 project this year and this photo was taken on Day 210. This particular day was a day filled with questions and quite a lot of soul searching. At the end of the day I finally came to a conclusion that whatever our history may be, it does not shape our destiny (hence the title).