This week’s Apps Uncovered presents a selection of what I found to be the most intriguing images for the week in our Flickr group, across a wide range of styles and subjects – but all sharing a common characteristic: they are unpeopled, uninhabited. Not completely abstract, but tending that way, and with nary a person in sight.

This week’s lead artwork, “casting far” by oola cristina is and engaging work that consists of both abstract and organic shapes – dandelion seeds against a starry (?) sky carried along in the breeze above patterns and shapes that suggest the 3D polygons that make up terrain in a computer graphics or CAD program. 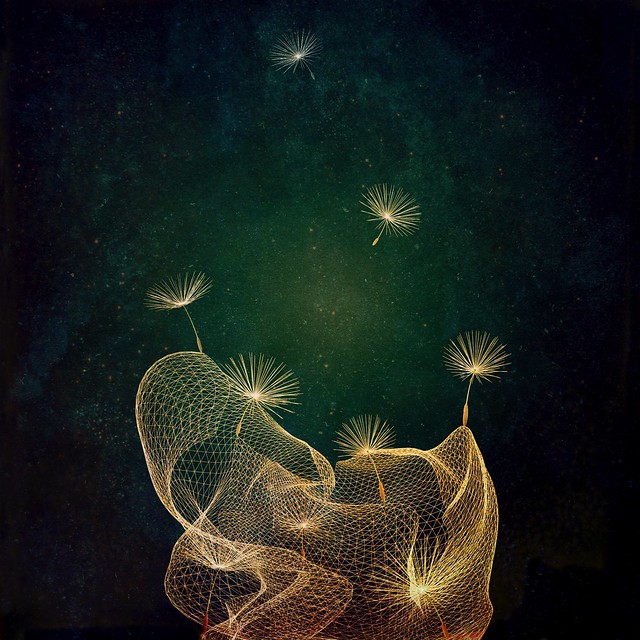 Apps Used: Leonardo, Mextures, Afterlight, Stackables, PhotoCrash2
Backstory: I often get ideas in that space between being fully asleep and waking. Most of the time it’s things like how to improve the way I do a task or figuring out a problem, but I also get ideas for art. The outline of this piece showed up during that in between time one morning last week. It wasn’t fully formed… just some floating dandelion seeds caught in netting. I found both images sometime last year and they were on my iPad’s camera roll. (My subconscious makes much better creative connections than my conscious mind, seems!) The floating seeds came from PhotoCrash2. I’m not remembering exactly where I found the netting, just that it was included on a site’s copyright-free resource page. I composed the image in Leonardo, then took it into Mextures until I found the filter combinations I liked best, which ended up looking like a sky of stars. Into Afterlight and Stackables next for additional filters to enhance the feel of the piece. Then, back into Leonardo for some final tweaks. I sometimes get a clue about a title of an image as I’m working on it, but this one came a while after it was finished. Titles are often a challenge for me, but sometimes I get lucky and one comes along that adds some depth and an additional layer or two of meaning. 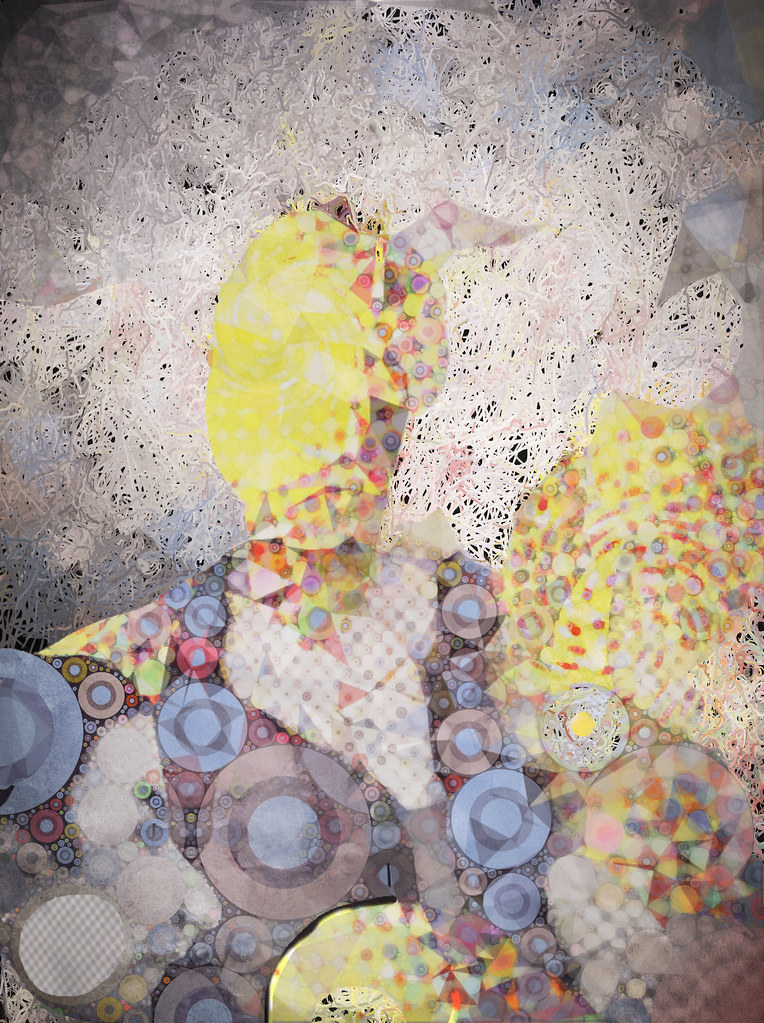 Blame It On the Shoeshine by Jorge Daniel Segura

Apps used: Edited on an iPad with icolorama, percolator, snapseed, repix, glaze and image blender
Backstory: Dont blame it on the boogie. A tribute to our illustrious politicians all around the world, outstanding men that won’t see beyond the end of their nose…

Apps used: IphonexS cameraplus2 Snapseed
Backstory: My backyard is magical. I am drawn to it, especially at this time of year. I was captivated by the abstract lines of this particular agave, “Ray Of Light”. The morning light was soft and enhanced its beautiful green and white stripes. My iPhone is always in my pocket. Cameraplus2 is a great macro app for flora. A little dab of Snapseed. Voila! 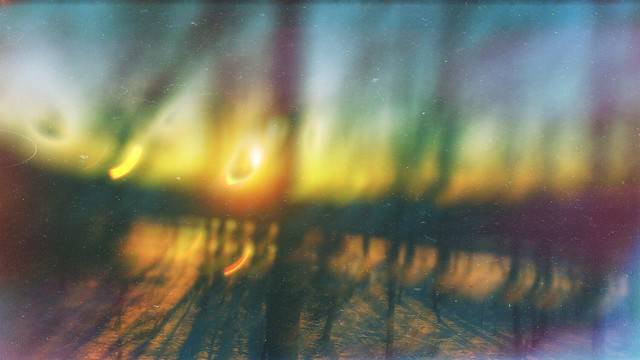 We will spin by Susan Blase

Apps used: Glitché, Mextures and Afterlight
Backstory: This photo was taken in my backyard when the sun was setting and it wasn’t the clearest photo I’ve ever taken. I really didn’t know quite what to do with it until I had the inspiration from an ongoing conversation I had been having about spinning. So, in Glitche I created the effect as if I was moving. I also adjusted the tone and texture in the remaining apps, but not too much, as I did not want to lose the mood of the original moment. I chose the title to dedicate it to the muse of this work, in this the photo is very dear to me. 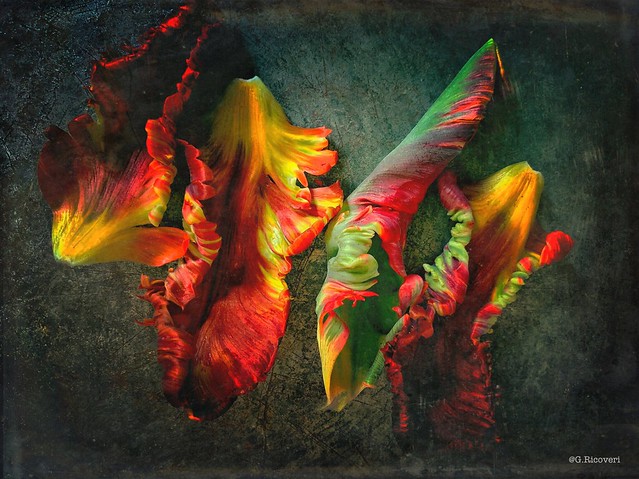 Apps used: I used Hipstamatic with the John / Robusta combo, then I edited it in Snapseed and finally I added various textures in Mextures
Backstory: I decided to highlight the beauty of my parrot tulip that was starting to lose its petals. 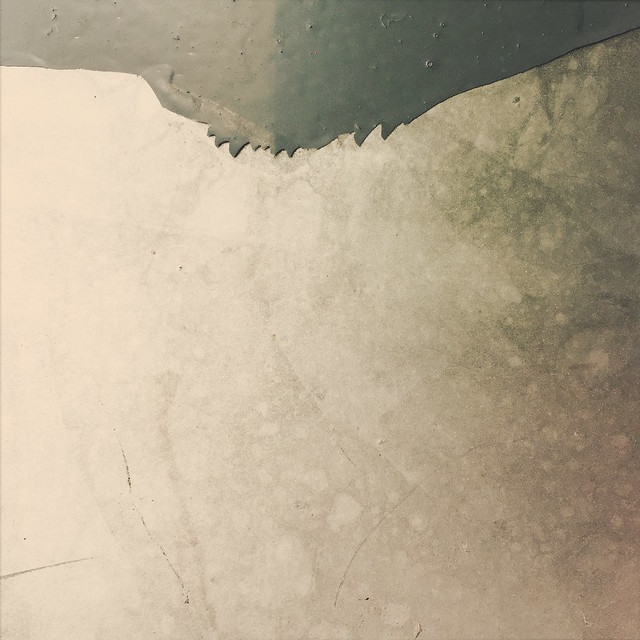 Wax and wane by Thomas Berg

Apps used and backstory: This picture was taken with the Hipstamatic app. The motive is a ticket vending machine where some of the paint has peeled off. 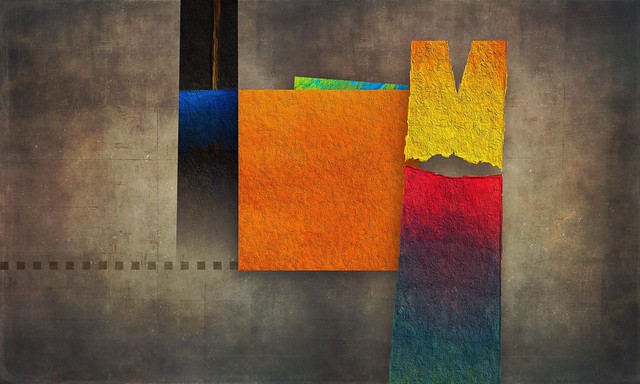 Apps used: Distressed FX, Glaze, iColorama, Mextures, Formulas, SuperimposeX.
Backstory: This is one of a series of reinterpretive works in which I utilize older images, either in whole or by fragment, to create in collage a wholly new work. This process of “renewal” is a common theme in my work, reflective of my Christian belief that we are being made new each day through our relationship with Christ. 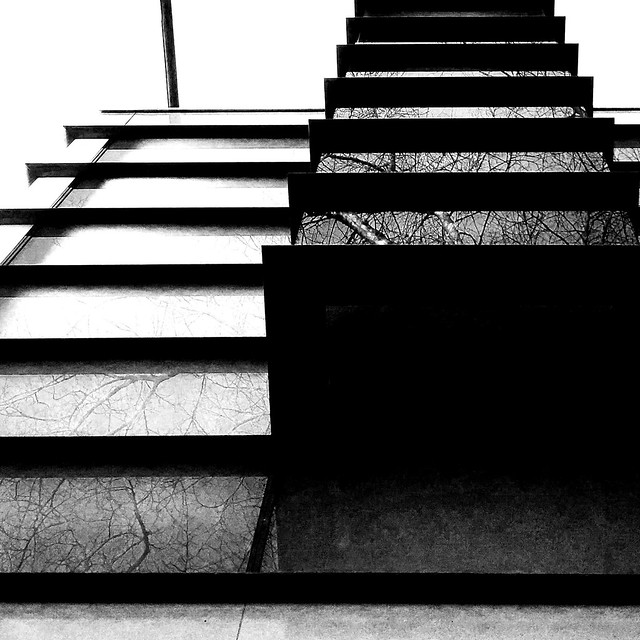 concrete vs nature by Rob Faber

Apps used: iPhone 6 / camera+ / Black and White / Fotor free
Backstory: I wanted to do this shot for a black and white conversion, but the light was really soft. First I tried the graphic minimalistic approach, but I liked the reflection of the tree too much. So I went to enhance that. I then decided to not show the tree itself and go for a square crop. 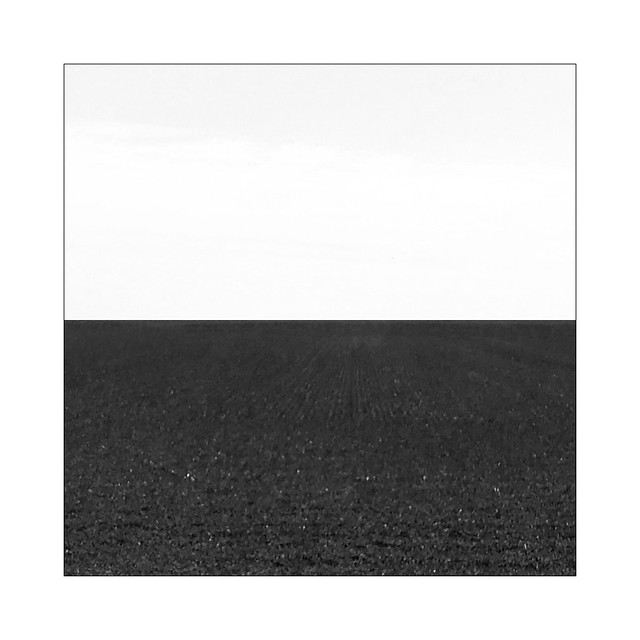 A Dutch landscape in black and white by borisbchulz