Woman are featured as the subject of the selections in this week’s Apps Uncovered. I had originally planned to entitle this post “The Eternal Feminine,” but that idea, even when used to convey the mysterious qualities of womanhood in a non-idealizing or stereotyping way, has become unfashionable. So a disclaimer is probably in order. By choosing these images, I in no way intend to limit the number of ways that women might express themselves or choose to live their lives. While I think these images present a compelling impression regarding some of the roles that women can play, I was naturally limited in my options by those images that contributors to our Flickr group chose to post in this arbitrary period of one week.

This week’s lead artwork, “And whom do you really know” by Clint Cline, evokes something a female archetype. It’s a powerful image with a strong figure in profile, and series of symbols and color variations that lend a certain aura of mystery and strength to the portrait. Not to attribute to this image any meaning that Clint may not have intended, I still found that it spoke to me in this way. Although a number of philosophers have spoken of one or more feminine archetypes, Nadia MacLeod expressed the notion very succinctly when she wrote in the late 90s that “The term Feminine Archetype refers to models or patterns of womanhood and feminine behaviour that are easily recognisable to us.”

David DeNagel, Kathy Clay, Willy Ramhorst, Jun Yamaguchi, Stef L.P., Francesca Ambrosi, Nigel Reader, rita colantonio, Barbara Braman, Paul Yan and Laila complete the week’s selections on this theme. Quite by chance, half the selections are by women, and the other half by men. 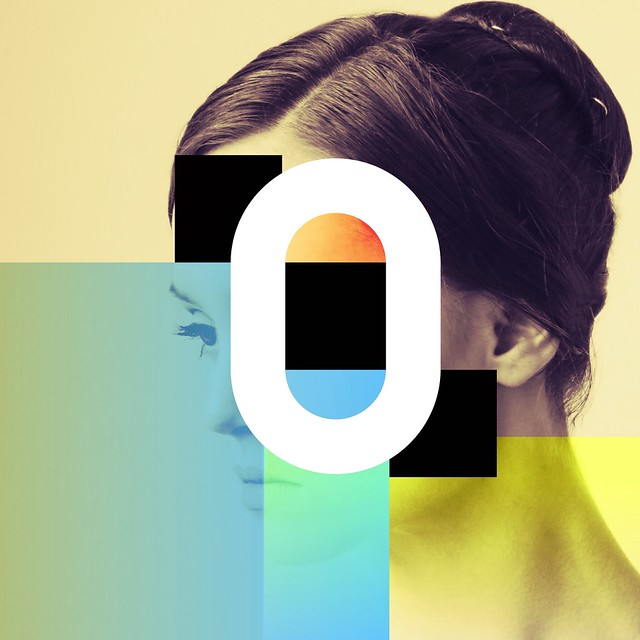 “And whom do you really know” by Clint Cline

Apps used:
Over (typography), Superimpose, Unsplash
Backstory: This is one piece of a 25-piece series exploring geometric abstracts that employ non-abstract human elements. These “mask” portraits were sparked by a study of the universal tendency we have to protect who we are from others, even those we know well, even intimately. This has become ever more apparent with our digital connectedness through online and social media today. Face-to-face more often replaces face-to-image, where identity is replaced and masked by projection. It does seem an odd dichotomy that the openness offered by social media often can produce an opposite result as we seek to shield our person, our identity, our emotions from others all the while manufacturing an alternate identity. In these pieces, the geometric abstract structure is an allusion to the mechanical nature of the digital realm and how it masks most, if not all, of whom we choose to show the world.

I’m grateful to Liliia Bada for an image on Unsplash used in creating this piece.

Apps used and backstory: The original image was taken several years ago and reworked recently.

The photo depicts a mother & her child ,which I met while taking pictures in St. Louis, at the Botanical Garden. I had just purchased the iPhone 7 Plus and was eager to explore its “ portrait “ mode and the newly added telephoto lens. So I approached a few likely subjects, seeking permission to take their pictures. Such was the case in this instance.

This image turned out to be one of my favorites. The mother was such a good sport about their “portrait session”. Even while trying to control the natural exuberance of her child, the mother just “glowed”; affection and mutual dependence were seen in both ,one for the other.

As mentioned, I used an iPhone 7 Plus. I post processed with Focos to set the depth of field, add a curves adjustment and to convert to greyscale. I then imported the image into Snapseed and made further modifications to refine the monochromatic effect( dodging and burning, vignette adjustment,clarity). I finished the image with the portrait mode in Snapseed. 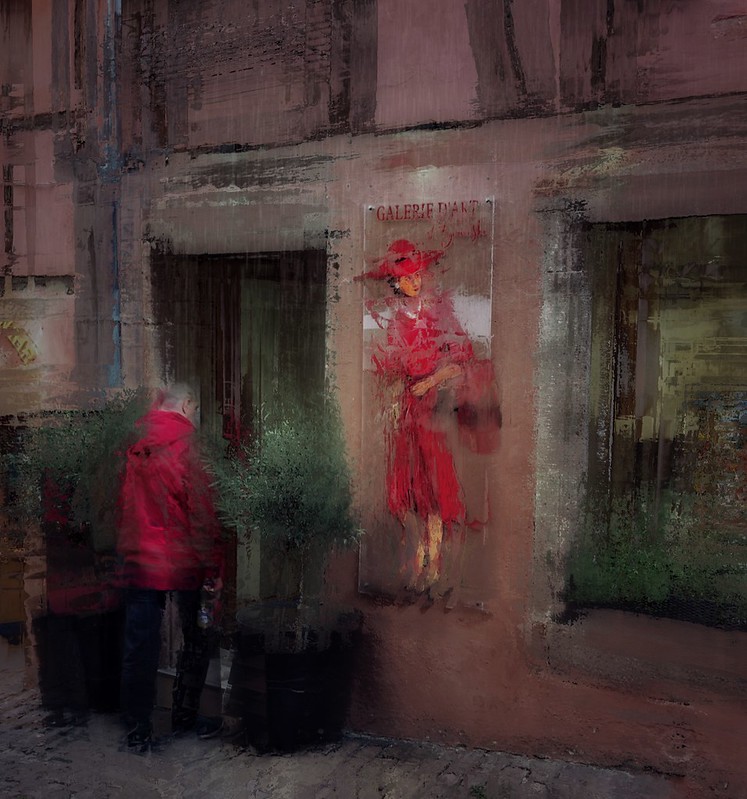 Apps used: snapseed, icolorama
Backstory: I took the original photo recently on a trip to France where we explored some of the smaller villages including Riquewihr. 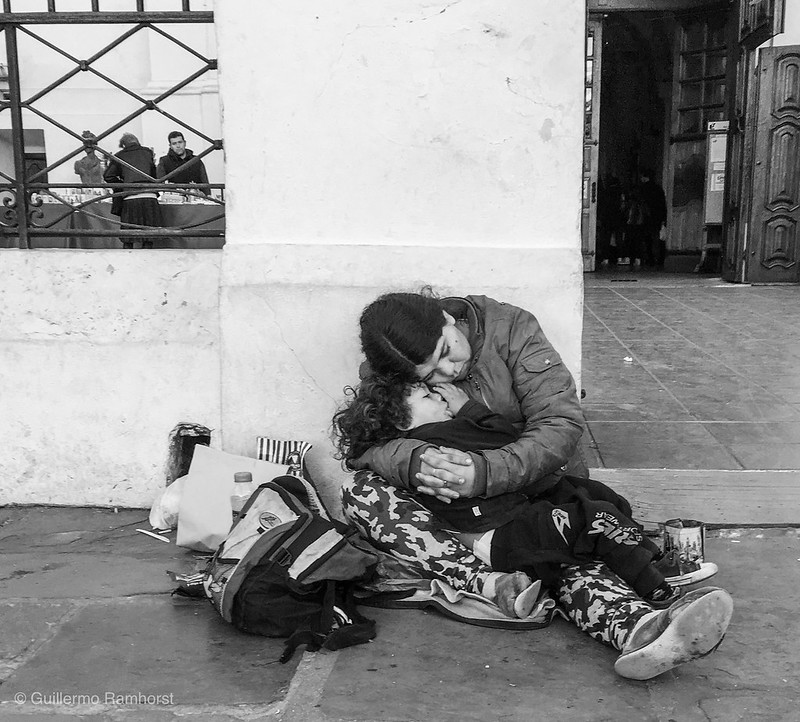 Mother and son by Willy Ramhorst

App used: Hipstamatic 322
Backstory: A mother and her son exhausted at the Church’s entrance of one of the wealthiest neighborhoods in Buenos Aires, Argentina 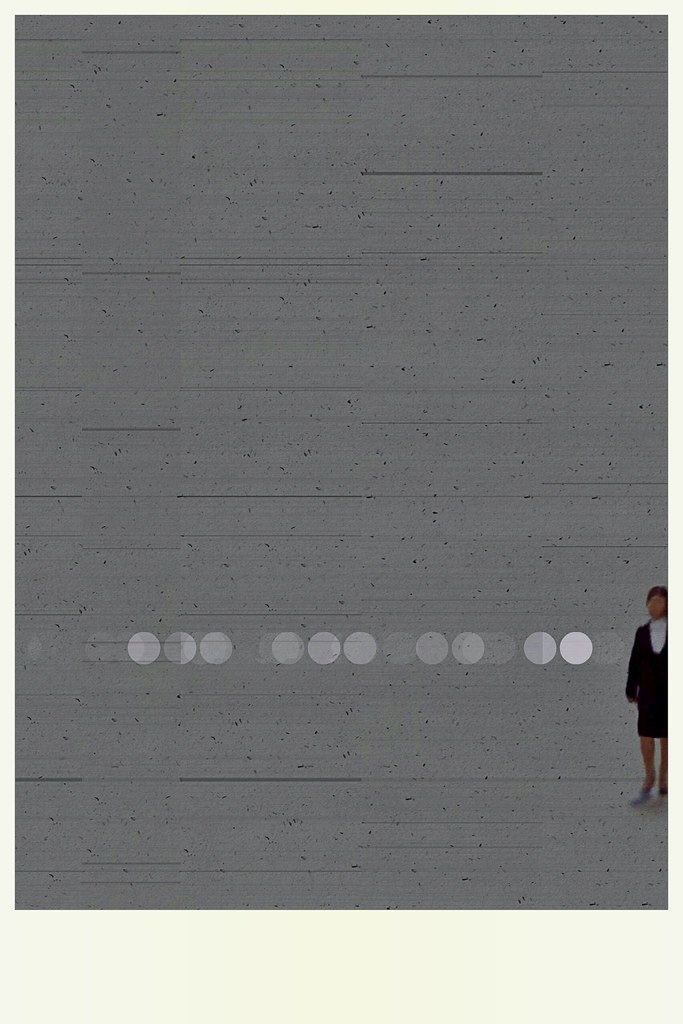 no sound by jun yamaguchi 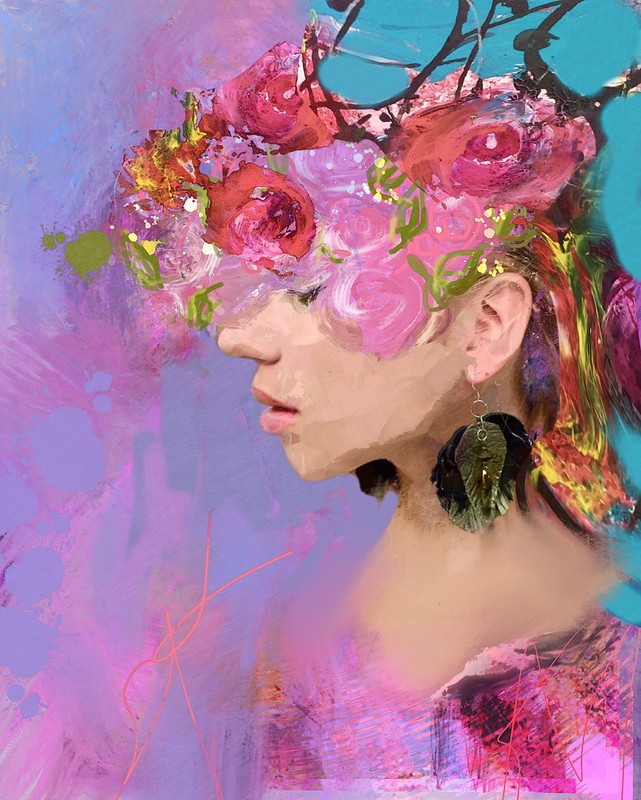 Apps used and backstory: Apps uses: Icolorama— procreate- superimpose. Backstory: I was working with some photos I had taken to display jewelry I make for sale. While editing photos it all felt futile— marketing a venue for income requires skills I fall short of; self promotion and the ego needed to engage are not my forte. As my brain began to wander with thoughts of lifes vanity I began to get lost in editing on my phone— a common distractor for me.

I decided to cut her face in Icolorcama using the marvelous rebound brush tool. While in edit The half face reminded me of a painter whose work I admire and I decided to emulate digitally. I created a background in procreate- travelled into superimpose to layer face- mask and superimpose actually paintings of mine. Returned to procreate to continue painting. As I was developing the piece I was reminded of my models dream photo shoot— A knights tale dress up. My focus landed on her headpiece — a sort of fragile yet punky abstraction that webbed her grounded despite the emptiness she faced. 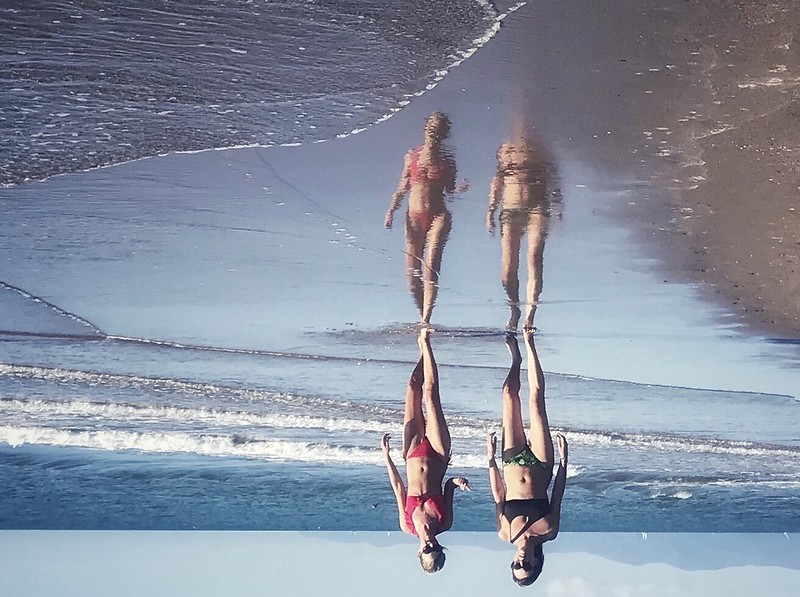 App used: Snapseed
Backstory: I was walking with my Mum on a lovely afternoon of September.
While we were coming back to our beach towels I saw the reflection of these two women and my mind immediatly went to another dimension. I’ve always been fascinated by other realities, so I just took the picture. 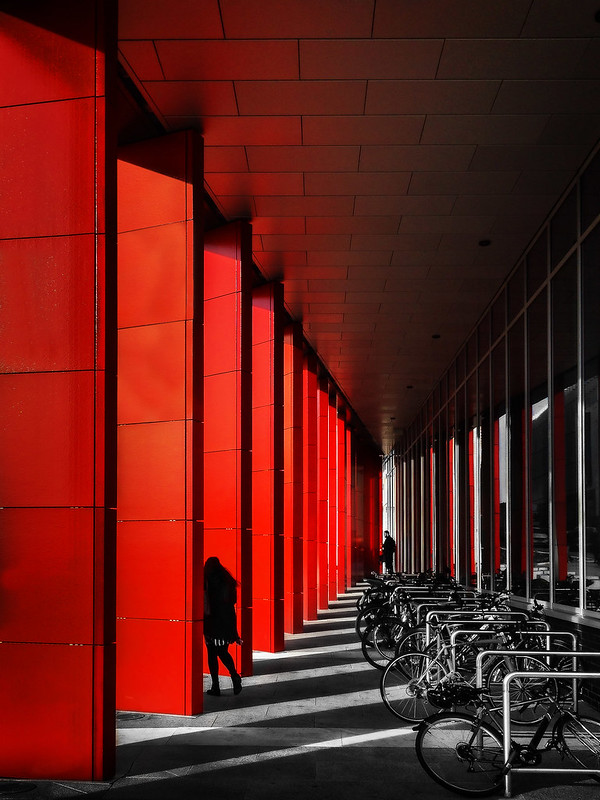 Apps used and backstory: was taken whilst I was looking for shots of modern architecture walking round the redeveloped Birmingham East Side. This is one of the many new University buildings and it was the facade of bright red columns that drew my eye – with the sun just in the right place casting shadows that added to the recession idea. I waited for a figure at the point of convergence and just by chance at that point the girl walked into the frame but headed out straight away. I thought that it gave the appearance of avoiding action – hence the title. Post processing was a mixture of my favourite Snapseed and then a little Photoshop. I wanted to desaturate the image but preserve the red – particularly the reflected colour – which I thought added to the tension suggested by the title. 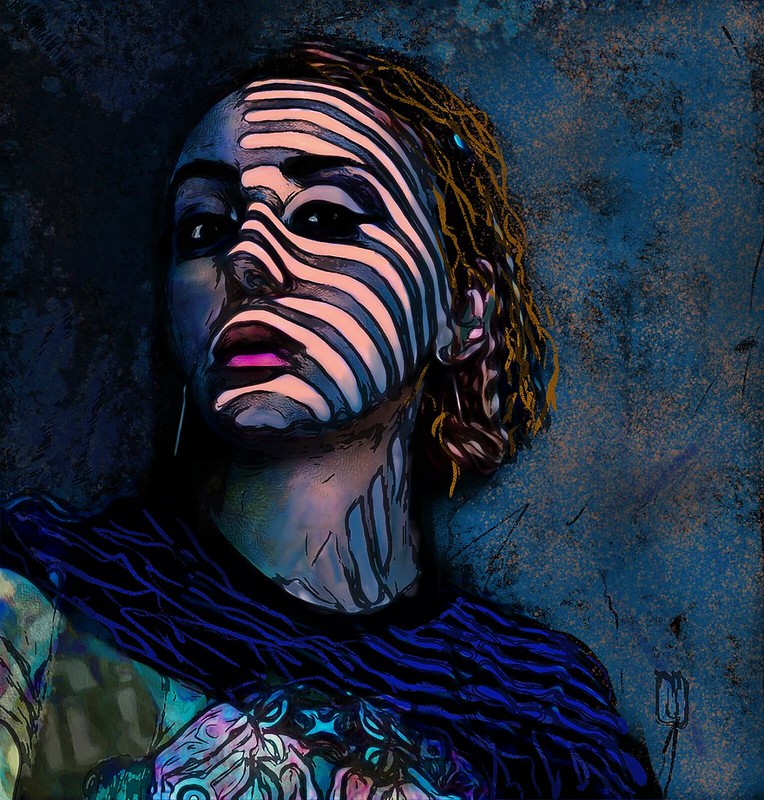 Looking through the shadows by rita colantonio

Apps used and backstory: I found the original portrait on Sktchy, a website offering copyright free images for artists use. I was interested in the linear patterns of the shadows as a design element, and also her thoughtful and detached gaze. Since the lines played a prominent role, I used the app InkWork to create strong lines on a white canvas, and saved it for later blending. I opened the image in IColorama to simplify and tone in preparation for painting. Then in Procreate I proceeded to apply painterly strokes, color and texture to the image over a barely visible original portrait layer, to allow me more creative freedom. I imported more texture into the piece. Back in IColorama I blended in the Inkwork image. In LightBrush I adjusted shadows and highlights, particularly aware of where the light was coming from and darkening the left side of the image. 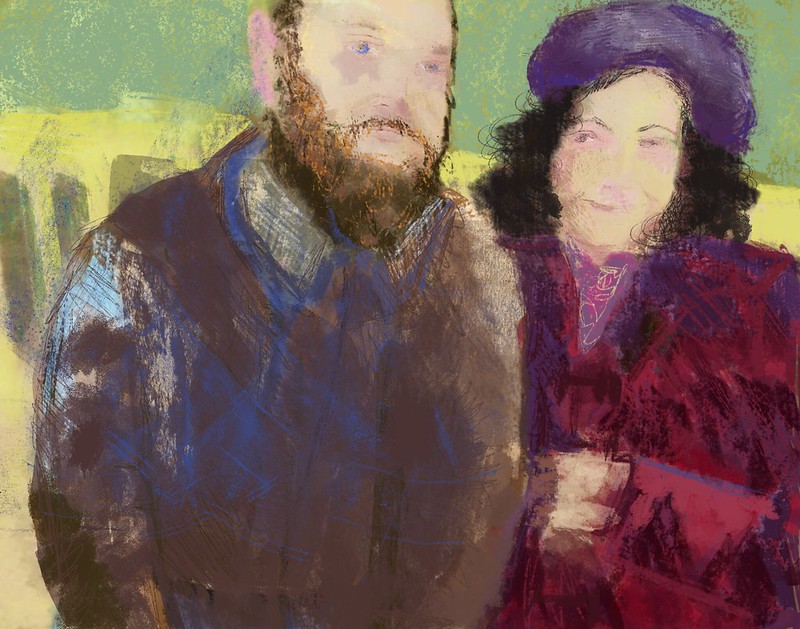 Apps used: Painted in Procreate with some photographic elements added. 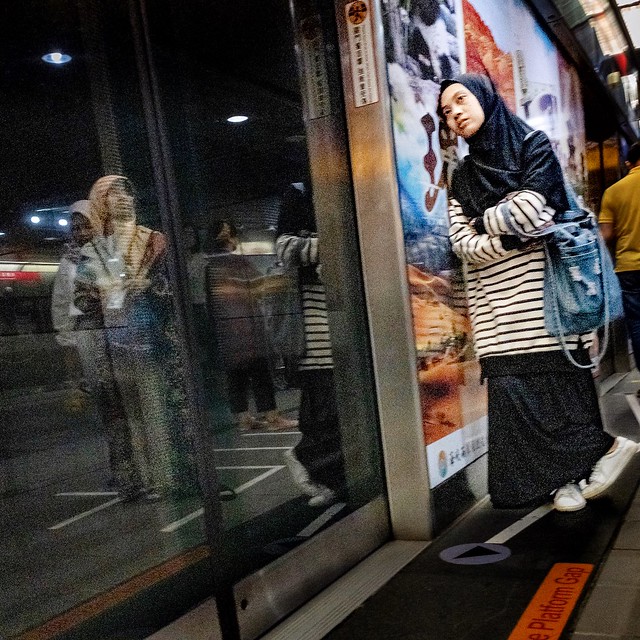 Backstory: She leans on the poster wall submerged in all her doubts: Why was she here? Was she only a property that had to be covered up according to her tradition? Where’s her future?…
The raw file was developed into jpeg in LightRoom Mobile and then dodged and burned in Snapseed. 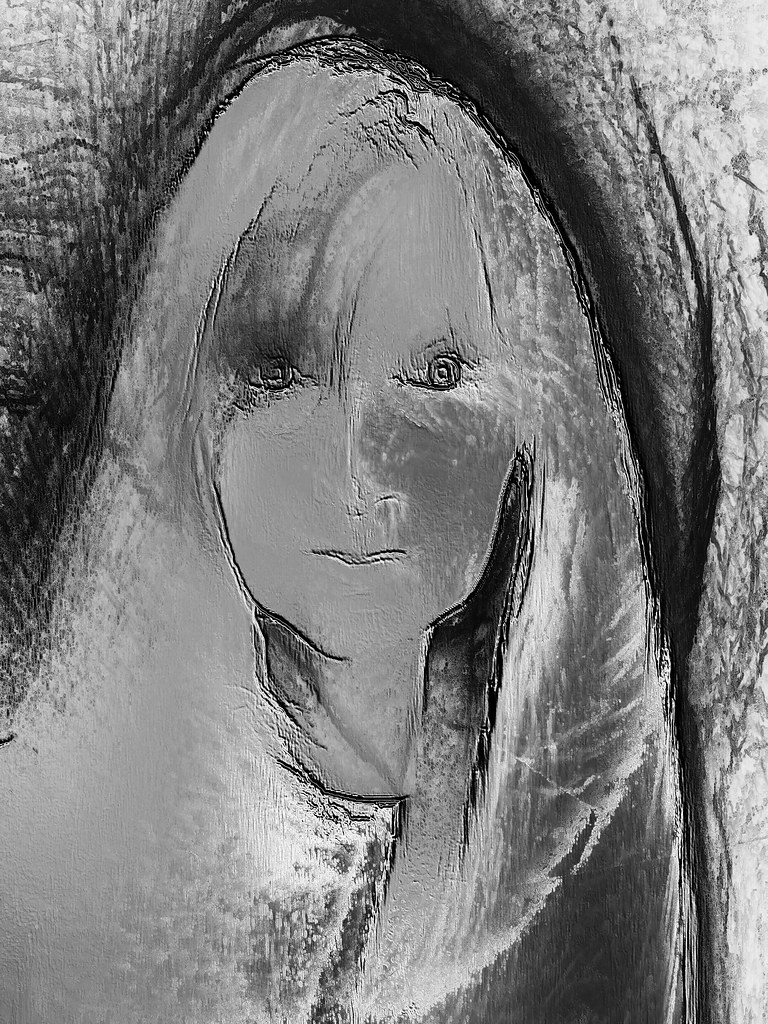 Apps used: Shot with Apple iPhone 6. Metabrush, TouchRetouch, iColorama, Superimposex, Snapseed
Backstory: My in-house models are very reluctant to pose for me, so I again was my own model. I started with Metabrush to rejuvenate myself. With TouchRetouch I grew long hair and removed irregularities. I played around in iColorama until I saw what I liked. I saved different versions and blended them in Superimposex. Finishing touch in Snapseed.