Welcome to the this week’s Apps Uncovered. This week’s lead image is a gorgeous painterly collage in honour of Diana Nicolette Jeon by Carolyn Hall Young. 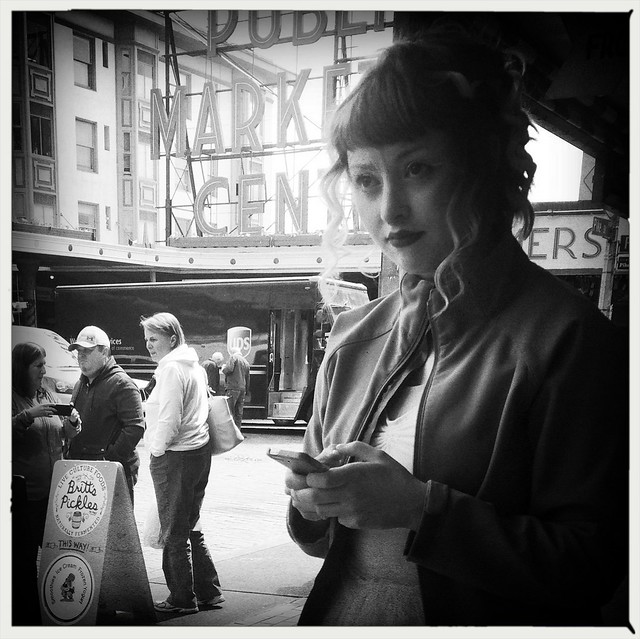 Apps used: This candid street portrait was taken at The Pike Place Market in Seattle using the Hipstamatic app with the Jane Lens and AO BW Film.
Backstory: This combination of apps [listed above] brings a lightness to the center of the photo with a slight darker vignetting around the borders – good for portraits to highlight the details of the facial features. 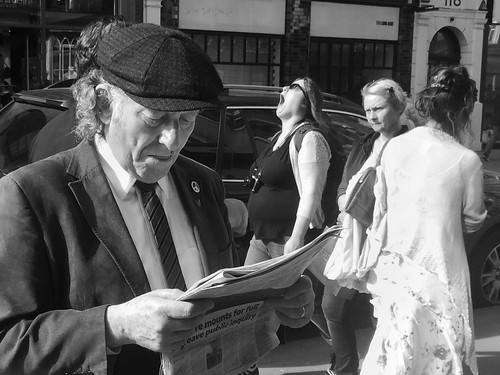 Apps used: Snapseed to make minimal adjustments to brightness and contrast and to convert the image to black & white. Backstory: I took this shot on a nice day near London’s Covent Garden. My girlfriend was in a shop checking out some things whilst I waited outside surveying the scene. The guy in the hat and reading the paper caught my eye so I caught a few shots of him and luckily I got one of him with a lady passing through the frame whilst yawning. The yawn looked like a scream in the shot so I captioned the picture appropriately. Whilst my subject was the guy reading the paper, it gives an interesting background to add interest to the scene. 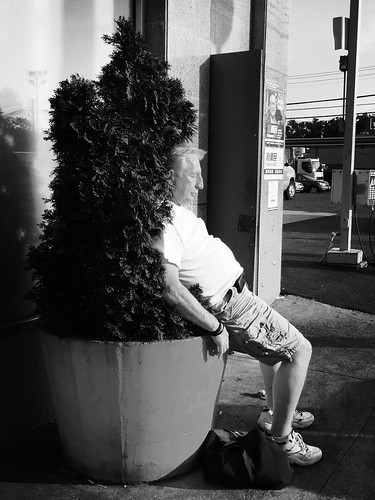 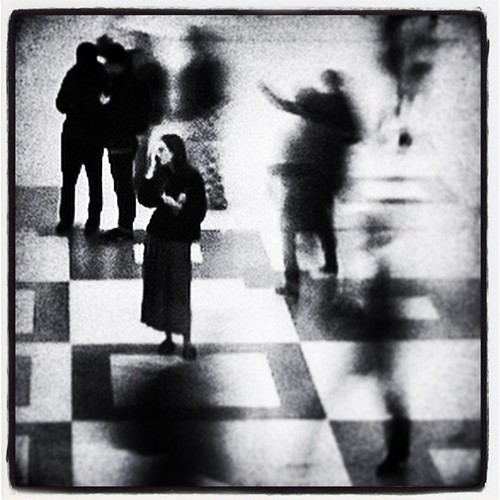 Apps used: Apps used: Shot using Slow Shutter Cam on iPhone 5s. Processing: Enlight; Instagram.
Backstory: There was a delay to the train home from London Victoria station so I whiled away the time playing with Show Shutter Cam from different angles and viewpoints. In fact I enjoyed spending time with this app so much that I almost missed the delayed train home… This image has a 2′ exposure and is a crop from a larger image, which was converted to mono in post-processing.

Apps used: I used the native iPhone 5c camera, added textures with Mextures, then desaturated somewhat with Snapseed.
Backstory: I was on Lake Shore Drive (Chicago), heading home after a long day, and the weather was very stormy, windy, moody. These days always appeal to me. I happened to get this while the rain and wind had let up for a bit. 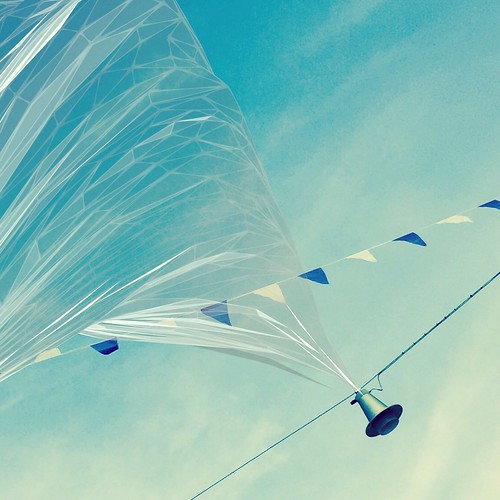 Apps used: Edited with native iPhone filters (in the photo edit menu), Mextures and the whirl phenomena created with Matter app. Backstory: “With this image I intended to create a maritime favour, the combination of sky, air and the illusion of water. I am addicted to pennants, and I like the combination of white and blue. The intense colour of the air I reached via the filter “process”, one of the colour filters of the preinstalled “Photos” app on the iPhone. The whirl phenomena was created by one of my favourite apps called Matter. As on my strolls through my city I have a lot of unexpected encounters, I started to number them.

Apps used: The original photograph was a color image shot with an iPhone 6s plus and Procamera. I wanted, however, to heighten the drama of this “nature morte” and decided to add a bit of texture in Mextures. I then deepened the mood of the image by converting it to black & white , while also adding a darker vignette and some glamour glow, all within Snapseed.
Backstory: I gathered some elements together to form a still life I had in mind. It was to be a meditation on Spring. I included some primrose,a watering can and the pruner I used to cut the flowers. I placed them on a plain wooden bench near a window. That was the only lighting I used. I wanted an aerial view so as to better illustrate the triangular relationship between the three principal objects. While arranging and rearranging the elements, I became aware of the impact small details could have on the entire “mood” of the piece. For example, I opened the pruners, to give the shape of the blades a more active(even threatening) compositional weight. In post processing, I lightened the primrose flowers, to make them more “full of life”. The aerial view also accented the dark half- elliptical opening of the watering can,giving the right side of the image a balancing compositional weight. Cut flowers, for centuries, have symbolized both the beauty and the brevity of life; with the primrose ,severed but still ,momentarily,highlighted, lying near both the life giving watering can and the open jawed pruners, I felt those symbolic associations as well. In a sense the image became a tangible allegory of Spring, in particular and Life, in general. 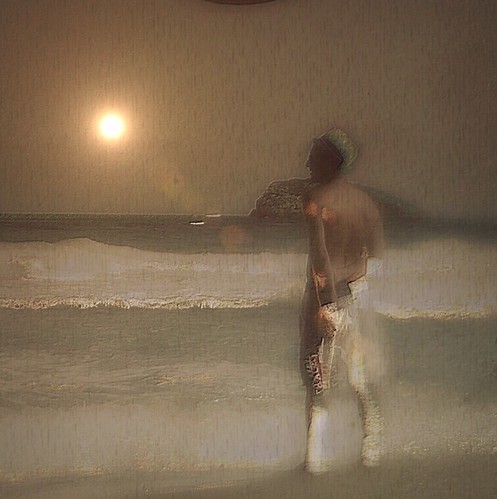 Apps used: Snapseed, Blender and LensLight.
Backstory: I shot this image on a very crowded beach in Ibiza. I cropped it with Snapseed to isolate him and give a sense of solitude. The double exposure was created with Blender/Difference to emphasise the character, Snapseed again for structure, and finished adding a sun to make the image more alive with LensLight. 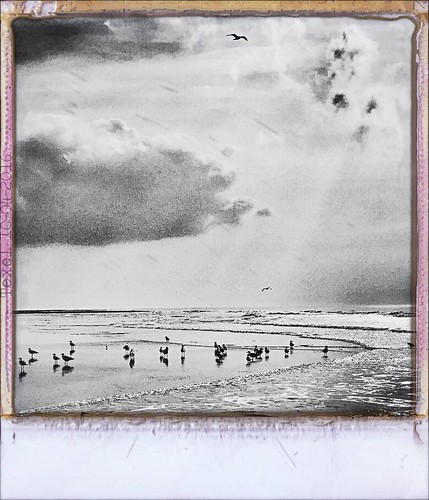 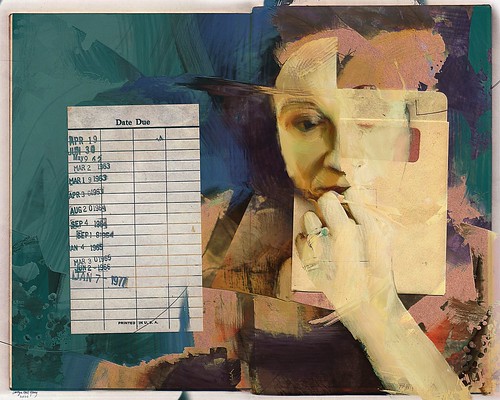 Apps used: I used the native iPhone 5c camera, added textures with Mextures, then desaturated somewhat with Snapseed.
Backstory: For Diana Nicholette Jeon. Three of three versions in a series. This is an iPad painting, made with a beta version of iColorama, and Procreate. I started with an older portrait I had made for Diana, and used some of her images as sources, and some of mine.