Welcome to this week’s Apps Uncovered which attracted the usual amount of serious iPhone art and photography talent with my choices leaning towards the more stark and darker side of photography, many in black and white. Tracey Renehan blew me away with her amazing image of the character at the market shot against the background of New York. This photo works well because there is much to look at from the captivating character in the foreground of dark greys and blacks, the immediate background of the market and then the towering background of skyscrapers. Tracey has conveyed a great story for the viewer. 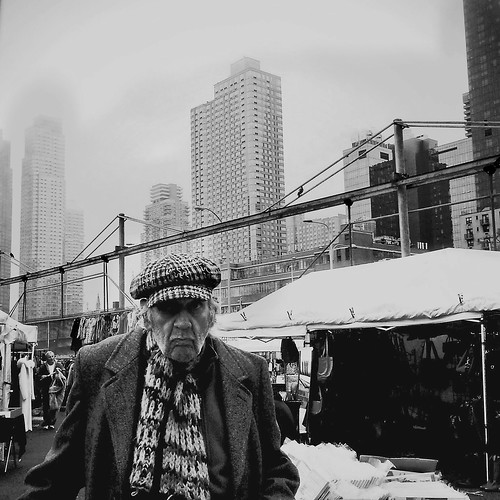 Stories to tell by Tracey Renehan

Backstory: This image was taken at a weekend market on a recent trip to New York. As I walked though the market, I spotted this man with a face that told a thousand stories and immediately felt I had to shoot him.  He was walking into the shadow, however the buildings behind him were a decent background, so I doubled around the market to head him off.  As I approached, he stopped to browse books at a store.  I stood next to him and pretended to look at stamps.  Just as he was about to move on, I turned to face him and took the shot.

The raw image was extremely dark and I really thought I had missed the opportunity.  After testing a multitude of apps to try to improve the exposure, I finally managed to bring up the overall light with FilterStorm and boosted the light on his face with the Selected Adjust tool in Snapseed.  I also used the shadow tool and added ambiance, structure plus a little drama in Snapseed.

I do not know the man’s stories, but as I edited the image, I imagined him to be a creative type such as a musician, an artist or a writer and that his life stories were an adventurous mix of hard knocks and lucky breaks. 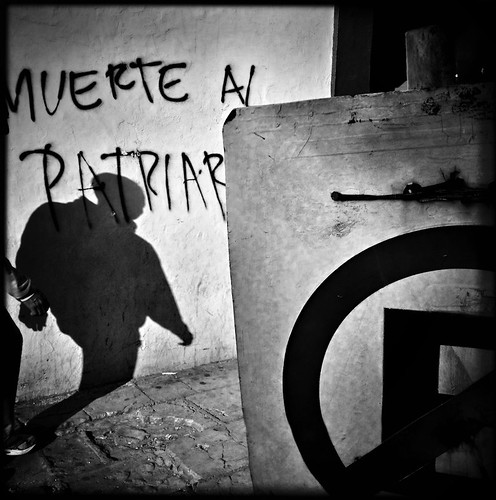 Death to the Patriarch by David Ingraham

Backstory: It was shot with my favorite Hipstamatic B&W combo — John S. lens/BlackKeys SuperGrain film — and then edited in Snapseed to pull out the textures and make the tones pop.

This was taken in Oaxaca Mexico while participating in a David Alan Harvey Workshop. All the students were working towards creating a photo essay that would be shown in a collective slideshow at the Manual Alvarez Bravo museum at the end of the week. This was taken on the final day of shooting. We were all exhausted by this point and had most of the shots needed, but David told us to still go out and shoot one last time.

I’m a fan of gritty urban imagery and I like incorporating signs, symbols, shadows, graffiti, texture, etc., whatever helps to make for a visually compelling composition. I frequently prefer aesthetics over content — imagery with a strong visual appeal as opposed to telling a specific story — and this image would be a good example of that. 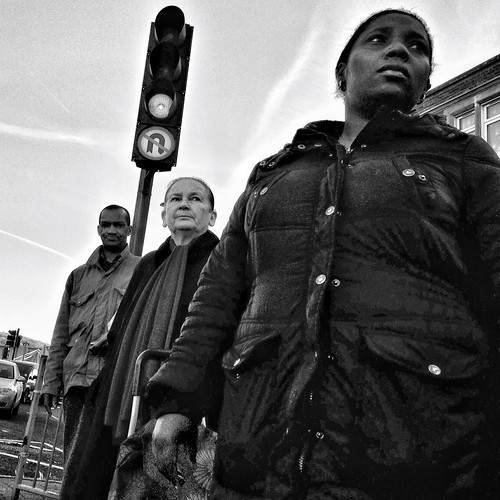 The man on the far left is who drew my attention first. I was walking alongside him before we both crossed the road together. He kept shouting, “I’ve got got no teeth! I’ve got no teeth!” over and over again. This explains the slightly worried expression on the other women’s faces in standing at such close proximity to him whilst being kept at a green light. It is interesting that he is the only one looking at my camera phone. Thornton Heath is not a wealthy area of London, and is not one you will ever see in the Tourist guide books. 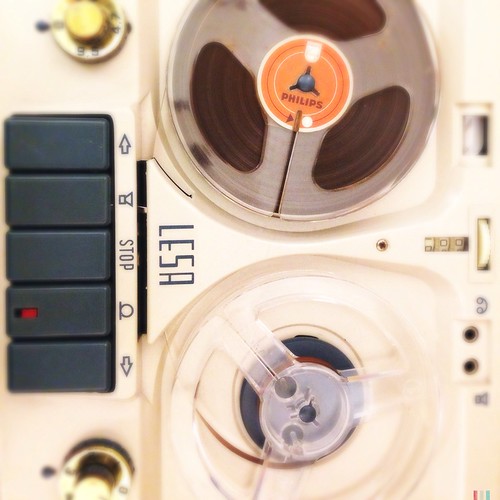 Backstory and Apps used: This photo was taken in Hipstamatic, I was really just trying out the new pak Yoona/Blanko 1. It was a quick snapshot in the mirror with no concept involved. I then used Snapseed for the Retro lens flare and dust. Finally into ArtStudio to lessen the blue/green tint and to bring back the eyes a little. 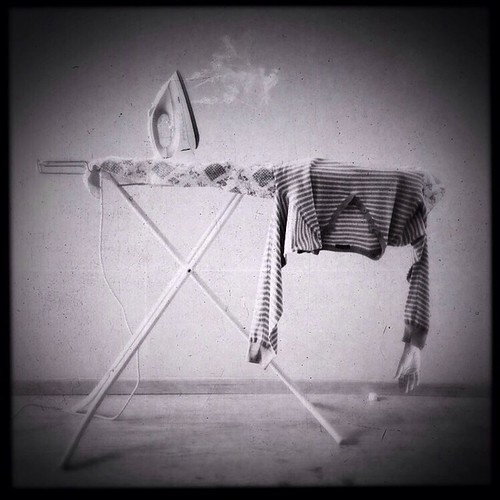 Backstory: I shot this pic with my iphone5s, i love the surreal pic and possible with humor and photos that tell a story,this picture has a very fifties look, it would have been good publicity for flat irons, with one hand 🙂 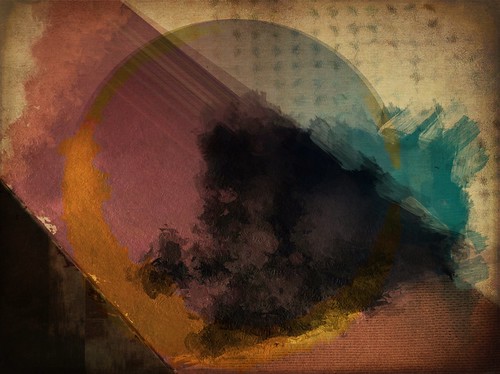 War and Peace by Clint Cline

Backstory: The impetus for this image comes from the weekly challenges my friend Roger Guetta offers on his Facebook group Appstracts. This particular assignment was to produce an abstract that defined your ‘self.’

I chose a theme of ‘war and peace’ as a metaphorical life story of sorts. The image is cut on a diagonal bounded by a precipice into darkness on one side and by an upper light on the other, possessed of order and purpose by virtue of the grid. It is an inevitable tension every person encounters in life, one which must ultimately be reconciled.

The diagonal also establishes a symbolic vertical frame of reference between heaven and earth. The gold arc buffering the dark precipice represents a season of life and, to be more precise, my time on earth more near the dark than the light.

I chose a darkened mass rising from that arc to symbolize my life, my own personal war and peace. It is purposefully rising away from the dark though with vestigial tentacles reaching back toward it. They are ever-present reminders of the sin which so easily ensnares me.

However, my story is more about triumph than defeat, of peace more than war. Light from the heaven touching my life represents the reconciliation I have made with Christ to live in that light, transforming the darkness of my heart and adding color and life which live in the light.

cold morning by M a r i k o

Backstory: It was very cold that morning when I went to a nearby lake to walk my dog.
The outside temperature was about -10°C (14°F) and it was also foggy so you could hardly see the water or the shoreline. But then the sun came out and I shot this image.

App used:
This picture was taken with Hipstamatic (Jimmy Lens, DC Film, no flash) and processed with PhotoToaster. I applied the Antiqued texture which I think even intensified the frostiness. 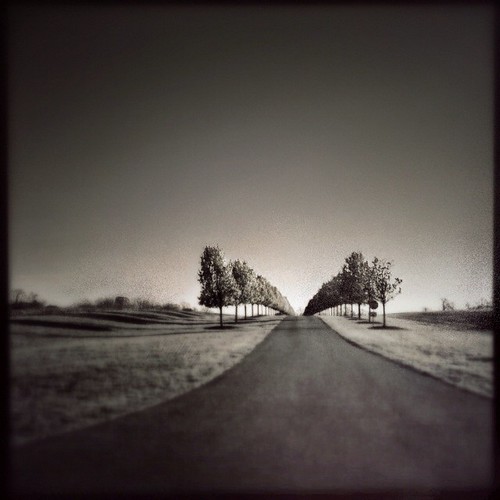 I have lived in a very rural part of Maryland since 2007, and since getting my iPhone in 2012, have snapped thousands of images of nooks and crannies in this picturesque area called the Eastern Shore.  Due to the rural character of my current residence, I have become a landscape photographer by default. That stated, for some reason, I had never stopped to take an image of this remarkable tree lined driveway.  There are a number of Chesapeake Bay waterfront estates and farms whose entrance is gained by way of long, tree lined drives like this one.  This one really stands out though for a number of reason: one is the incline of the drive, and the other is that the trees that line the drive are planted many yards from the main road, which really draws the eye.  The property/estate is called Rose Hill- it is also marked by a state historical placard –  the home, however is privately owned.

I had recently downloaded the new Lowy/Sugar Hipstamatic pack and was experimenting.  I have to say here, that until recently, I had hardly used Hipstamatic – I just can’t seem to get the hang of choosing the right lens and film combo, and frankly, my experiments have usually produced bad results. I also have not been a fan of the square format, and only recently started uploading to Instagram (themobilemind).

I liked my original unapped shot using Lowy and Sugar, but played with [it] a bit.  I imported the image into Snapseed using the Tune Image, Details, Selective Adjust and Center Focus selections. To create mood, I then used Gradation and Diffusion in PhotoFx. That’s it.  The image simplicity tempted me to play, and I like this result almost as much as the original. 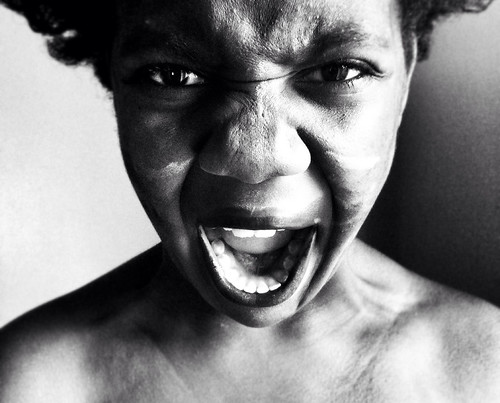 Can you hear me! by Paula Gardener

My daughter is currently studying GCSE Art. She needed some self-portraits, so she composed a few shots of herself. I was really intrigued with how she worked and the style she was trying to convey. Of course I just couldn’t sit and watch so when she had finished. I talked her into to posing for me, I explained she could do what ever she wanted. So she screamed, literally.  I loved it! What you can’t see is that she had smudged makeup all over her face. I didn’t want to use the colour version.  Black and white worked better for this shot, I loved how her energy was so strong.

Apps used: I used the iPhone 5 native camera, then edited it in my favourite app Snapseed. All I did was crop the image to emphasis more on her expression. Then change it to black and white.

Back story – I left my house at 5.00 am one morning after noticing it was foggy outside. This was a first for me since getting into the art of photography so naturally I quickly shot out of my house with my almost dead iPhone 4S, chasing on foot it which lead me to a very dull farmland. Given I was trespassing, I weren’t planning on pushing my luck so I quickly framed a few close ups of this barb wire. This can be tricky to focus on the iPhone so I was glad it happened quickly. My iPhone did die at that moment which left me very sad, and soaked from walking through wet mud, which ruined my shoes in the process. I then processed with VSCOcam with dark tones to express the mood I was in at that moment. 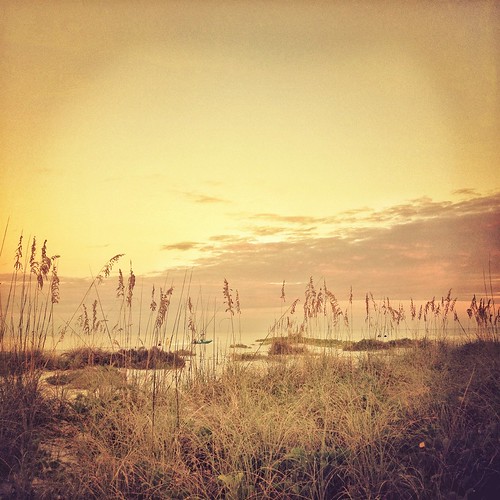 Always thankful for this, even as I look out at a thrilling little dusting of snow on a North Carolina mountain. by Stephanie Roberts

Landscapes for me tend to be about escape, solitude, peace. While this tiny Florida island is quite personal to me, I hope I can transport the viewer there, along with all the quiet, rustling sensations felt on an early morning alone.