Each of the shots selected this week is exceptional in how it conveys a mood, concept, moment or stunning landscape – we hope you enjoy them! We lead off with two very different self portraits – one will make you think, and the other will surely make you smile. We conclude on a somewhat darker image – but as you know, I’m a big fan of conceptual pieces, and Ade Santora contributed a great chapter to our book. I’m a huge admirer of his highly post-processed self-portraits and the portraits of his wife. 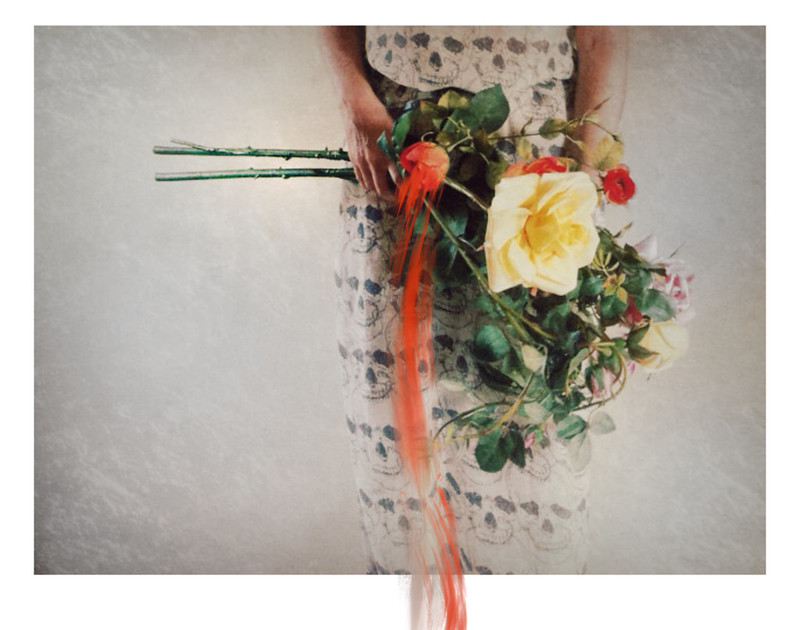 Backstory: I took this self-portrait with SlowShutter camera (with self timer) and then used Snapseed for to adjust contrast, brightness etc. Finally I used the Procreate for the painterly effect with the flower, that’s all ! 🙂

Backstory: I got this idea by reading a men’s fashion magazine, and I told myself that it was costing overpriced, but I love the clothes! so I had the idea to cut the clothes and stick them on a sheet drawing, and then I wrote the price then I took the photo of the drawing sheet with the clothes and the prices and add my hand with scissors (as if to say that I had cut myself) and my head with Superimpose. I then used vsco for added a filter

From a moving train by Dani Salvadori

Backstory: For family reasons I often travel between London and Scarborough (a seaside town in the north east of England) by train. I’d been playing around with some of the various aspects available in 645PRO and wondered what would happen if I took a photo out of the window of the moving train. Much to my total surprise the images were great, especially if I adjusted the settings to focus in the distance and reduced the shutter speed to the minimum 1/30. It was a day with a great variety of weather as the train sped north and was harvest time. I found myself taking a whole series of extraordinary shots of England at its most beautiful.

I did minimal editing: I just adjusted the perspective in SKRWT and pumped up the drama in Snapseed.

Backstory: I wanted to represent affection in the absence of people, so I took two white outside and arranged them suggestively. Then I shot the scene with Hipstamatic (LuciferVI / RockBW-11 / JollyRainbo2X). Over editing would have ruined the effect, so I just used a fading effect and adjusted it. 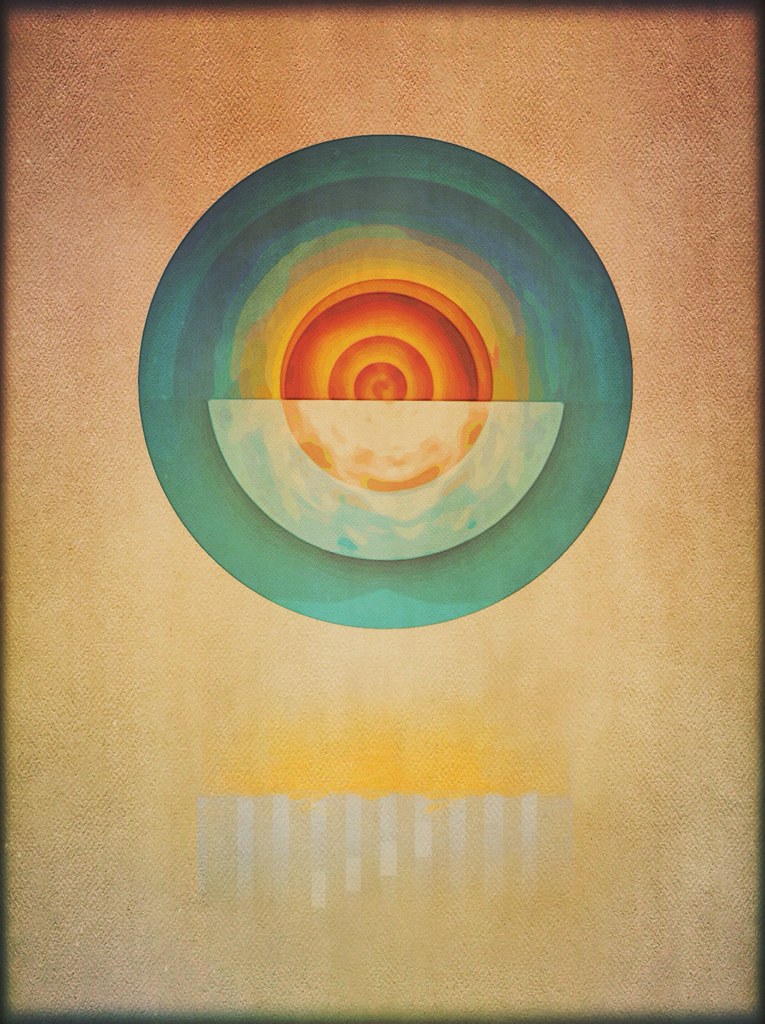 Backstory: This image was inspired by a challenge from Roger Guetta to represent the idea of Summer in abstract terms. It is one of a series of seven images following that theme. Within the series each image is comprised of one major circular element and a complementary second freeform element, both set in a field.

For Maui Summer I sought to represent the sense of summer in the Hawaiian Islands. The major element conveys the colors of the water surrounding the Islands overlaid by a radial warm sun. The half bowl presents a horizon line reflecting the rising sun in the surf.

The lower freeform element is a shorthand repetition of the sun and surf theme. The structure to the white surf notes the rhythmic regularity of waves coming ashore in a manner that reveals the ordered reality of God’s origin design of creation. Both the major and secondary elements are held in a field representing the beautiful sand that surrounds the islands.

Backstory: The image symbolizes my daily way to work. I used three photos to make so-called “double exposure” composition. Two photos were taken in Gdańsk (woman in tunnel) and Gdynia (buildings), Poland. The base picture was taken at home on white screen (image of woman).

I converted all pictures to black and white in Snapseed. Double exposure was made in Union app. First I combined two pictures – the image of the woman and the buildings. Then I added the photo of the tunnel to achieve the final effect.

Apps used: iPhone pano shot taken in the outback ghost town of Cracow, Queensland. I used Snapseed and Filterstorm on the edit. The sepia tone was added in iColorama.

Backstory: I wanted to document the few remaining decaying empty houses in the outback ghost town of Cracow, in Queensland. I like the detail and perspective that iPhone pano shots give me, so I chose to use that technique for this shot. The shot was taken mid-afternoon, so there was some harsh contrast between the shadows and the areas of highlight. I used Snapseed for the crop and detail adjustments. I find Filterstorm is more flexible for tonal adjustments, so I used it next, to make some local adjustments to reduce the overall contrast. The sepia tone was added in iColorama.

Backstory: The scene of an older woman walking by in a red coat simply intrigued me. 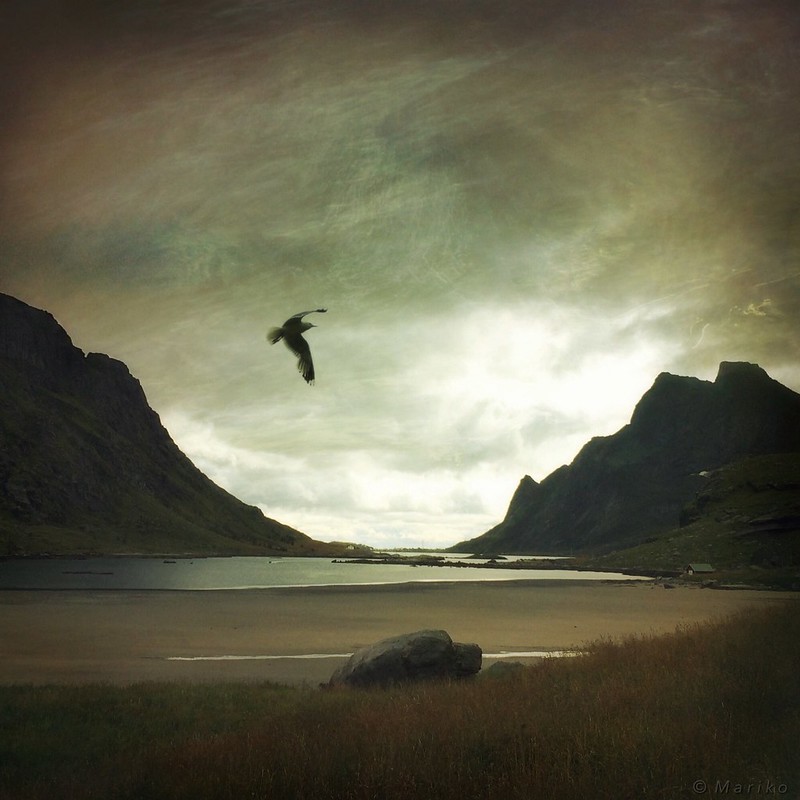 Backstory: This picture was taken at Bunesfjorden on the Lofoten Islands in Norway. It was rainy and windy, just how you would imagine the weather in Northern Norway, uncomfortable but moody. My dog started to chase seagulls and I took this opportunity to take this picture.

The fellow with the brown eyes by Vanessa Vox

Lens used: Olloclip macro 10x
Hint: The olloclip app helps you to set the right focus using the „macro mode“. With this feature you can zoom in the pic to control the sharpness.

The big challenge of macro photography is that you have to come very close to your motives. And you have to find the one and only distance which makes your picture sharp. But don’t forget: The macro world is a bustling world. Its creatures are very busy. And the wind keeps everything in permanent motion. So you have to be patient and concentrated. Sometimes I recognized that I stopped breathing to catch the right moment.

Now to this pic: I was very attracted by the beautiful grasshoppers. These little fellows are really good-looking but unfortunately when I tried to come closer they always fled as soon as possible. Leaping and hopping everywhere around my feet. And some of them can even fly. I recognized that persistence is asked!

After many failed attempts I discovered that some of them are not so shy. Especially when I began to talk to them softly. Suddenly the magic happened. I could enter into a relationship. And my motif was no longer anonymous but a face which interacts with me. „The little fellow with the brown big eyes“ got curious and let me play with my mobile device. And this enabled me to take beautiful portraits of it. I had a close encounter with a friendly inhabitant of my garden. 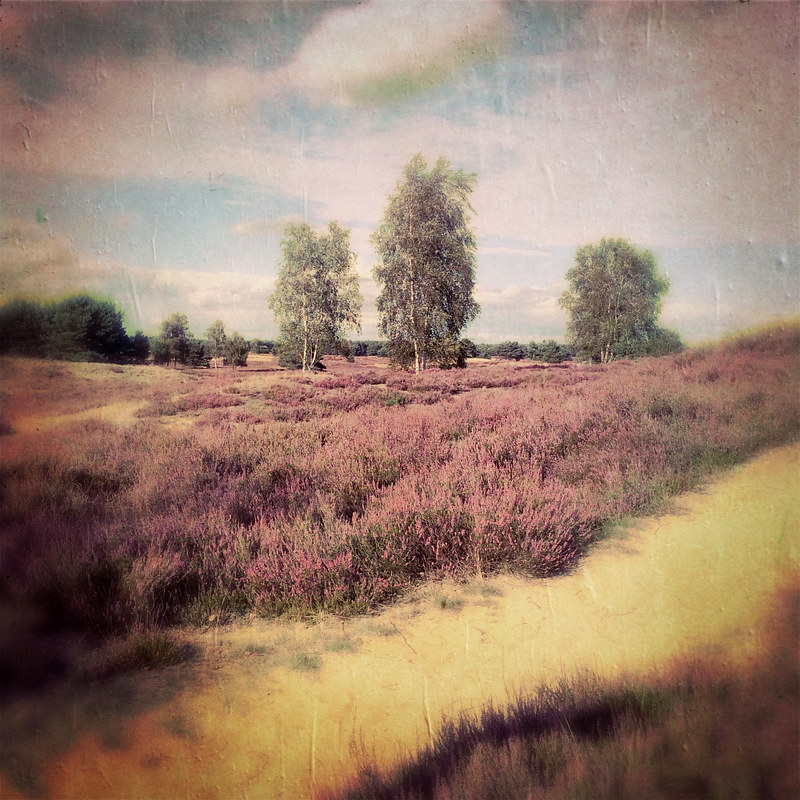 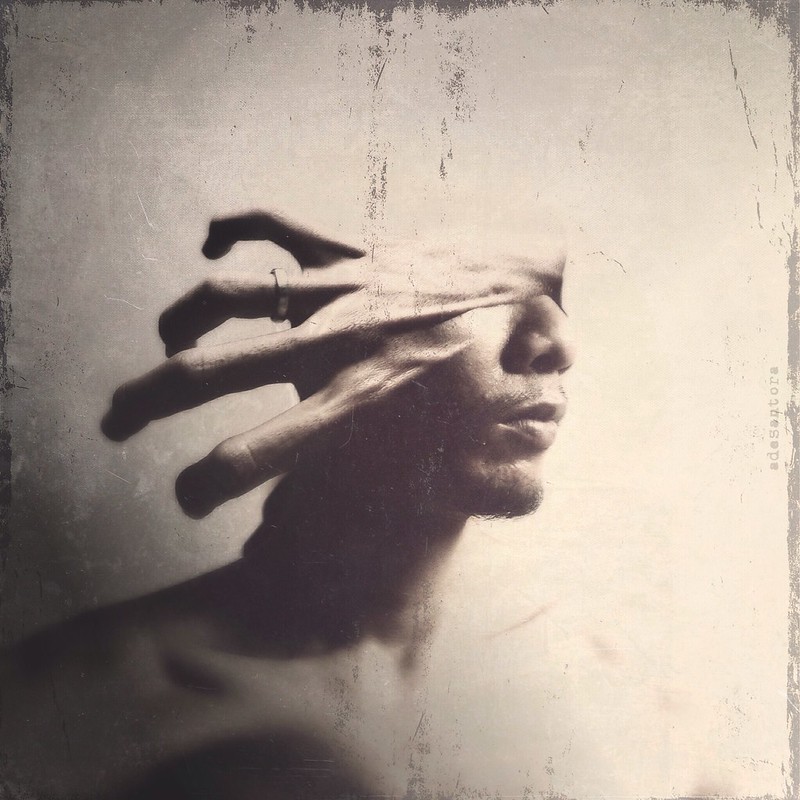