Welcome to this week’s Apps Uncovered where we feature a range of iPhoneography talent and reveal the creativity and techniques behind each of the iPhone images featured. Time is short for us working parents at this time of year so I apologise for the brief introduction this week but thank all of you for submitting your wonderful work to the iPC Flickr group every week. Big thanks to Aldo Pacheco who steals the lead photo with the wonderful image “I’m gonna harden my heart.”
If you’d like a chance to be featured in this weekly showcase, please remember to include your apps and backstories with your photos. Thank you, as always for submitting your amazing work.- For a chance to feature, please join our Flickr group.
Thank you all for contributing your wonderful images and we look forward to discovering the stories and techniques behind them. If you have any questions regarding this feature, please email Nicki at nicki@iPhoneographyCentral.com 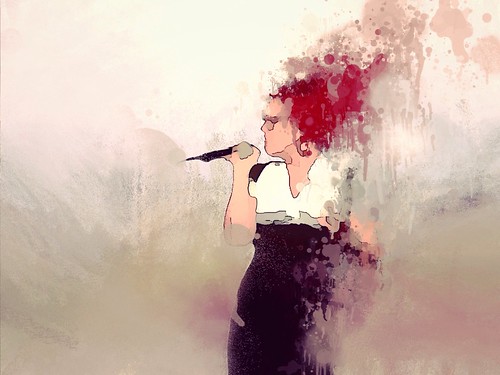 Apps used: Snapseed, Glaze, Repix, iColorama, Superimpose and Elasticam.
Backstory: Image taken with iPhone 4S during a rock jamming in Oakville ON, no flash used, just waited for the right moment and a little zoom.
I used 2 photos to get the result:
Background image: a blurry landscape
Main image: singer
Apps used and process:
Preparing images: I used Snapseed to start with.
For the background I used Glaze to get the painting effect and then Repix to apply chalk and spray affect
For the singer: in Superimpose I deleted everything but the singer and saved as png allowing me open it in iColorama and apply painting, simplify and add edge effects. I then opened it in Elasticam to enlarge the hair, fix the mix and fix curve the body a little
Both images in Superimpose and mixed to open it in Repix to apply Drips effect in some parts of the image: hair and right side
.. Done! 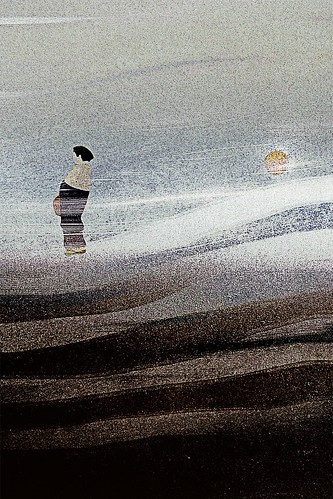 Backstory: The title means “snowing on the end of the land” in English. 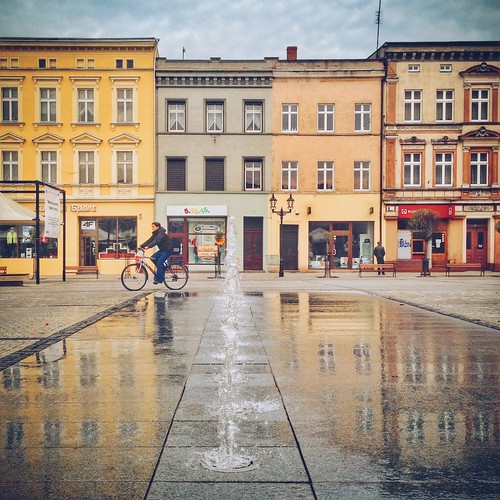 Apps used: Processed with VSCOcam with a5 preset, Snapseed edit
Backstory: I placed the fountain in the middle of my frame and tried to shoot these colourful buildings and their reflections and then the cyclist appeared just in time to complete the composition:) the photo was taken in Krotoszyn, a town in the western Poland. 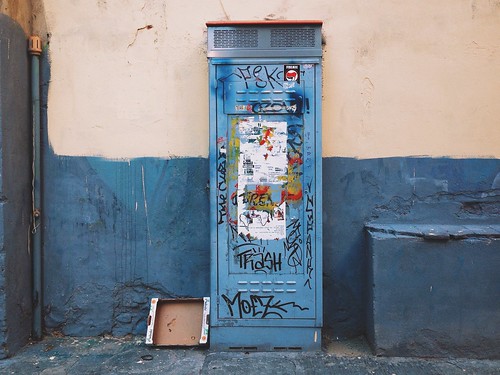 Apps used: Taken / edited with VSCO Cam + K2 preset (and some tweaking).
Backstory: This photo is part of an ongoing series by the same name that I am posting on my VSCO Grid.
Every photo is processed exclusively using the VSCO Cam app and one of its presets, only adding a few tweaks – as I see fit – for each photograph.
Alégria (the series) portrays scenes of urban decay, found sad spots, blue-deviled settings, focusing more on “the corner” rather than on the overall situation surrounding the shot. 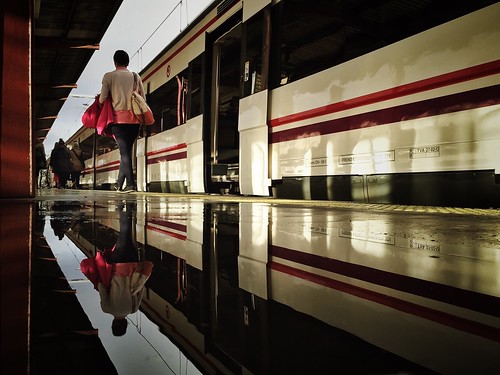 My daily reflection. Hurry up, or we’ll miss the train by Luisón

Apps used: This pic was shot with my iPhone’s 6 native camera and used Sanpseed and Filterstorm to edit it.
Backstory: I was about to take the train to Ponferrada and the was this puddle on the pavement, so I kneeled down and framed the pic trying to have a symmetrical axis right in the middle of it. I didn’t want to shoot only the reflection of the train on the puddle, so I waited for this young woman to pass by and shot. I took several pictures, but this was the best one. The idea was just to have a pic divided exactly in two parts, the upper part the real world and the the lower one the reflected world. I was interested in the perspective of the train and the silhouette of the woman composing the picture. 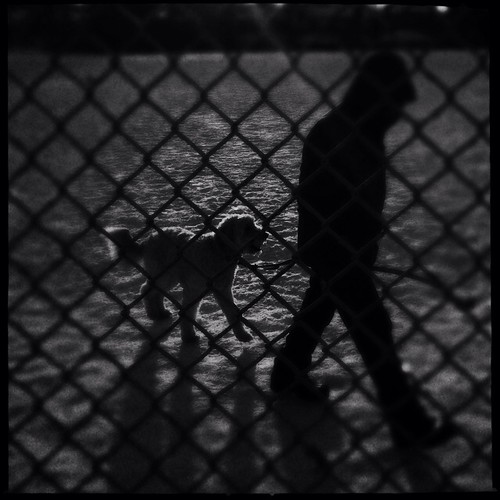 everything’s going to be alright by Julia Nathanson

Apps used: Shot and edited with Oggl (Tinto 1884 lens/US1776 lens)
Backstory: I saw this gloomy-looking man and his cheerful dog walking in the snow and had to take some pictures.

Snowfall on Autumn by Cary Larrabee

Apps used: 645 PRO MkII (V50 setting), Dynamic Light, Tangled FX, Image Blender, Mextures and Stackables.
Backstory: After a fairly long period of warm fall weather here in Denver, things changed overnight, literally! My focus had been on processing some of the fall images I amassed during October and November when our weather was finally forecast to change, bringing with it a chance to shoot some fresh material.
I had been hoping for snowy weather before the trees were done changing so I could get some images of the warm fall colors mixed with colder winter colors before the trees were totally bare. My goal on this day was to get some shots of those still changing trees contrasting with the freshly fallen snow, both on the trails and along the flowing creek.
In this image, the tree directly in front suited my eye for framing along with using the creek to guide the eye into the same tree serving as an eye stopper. The warmth of fall, coexisting with the cold and snow, in natural harmony, seemed like a breath from nature to me.
I love the changing of the seasons and this day really offered a visual example of its natural beauty, at least in my eyes.

Apps used: oggl AfterLight LightBoxr Snapseed PhotoPower mextures…
Backstory: When I got tired from reading a book, my cat jumped on the table. upon picking up my iPhone on the table I immediately held it. I aimed at between light and shadow. then he came.
actually I edited this photo about 2 months ago. but I couldn’t satisfied with it. so I left it in my camera roll. I didn’t record the apps I used, so I can’t remember all. few days ago I found it in my camera roll, I tuned minor adjustments and posted. 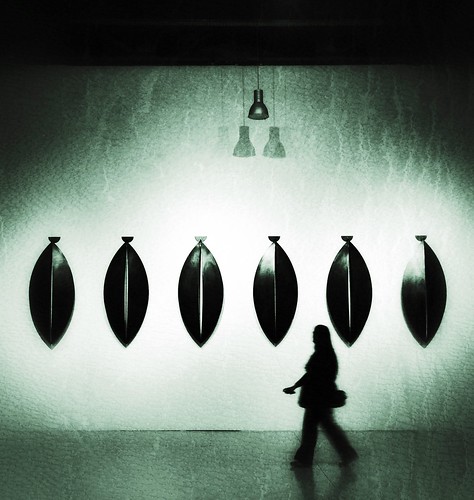 Apps used: Captured and edited on an Iphone5 with Snapseed.
Backstory: Exhibitions are great places for taking interesting shots. There are many nice background opportunities and you won’t attract people’s attention as they would be engaged in viewing the exhibits. This photo is from one of my exhibition visits. I hope you enjoy it. 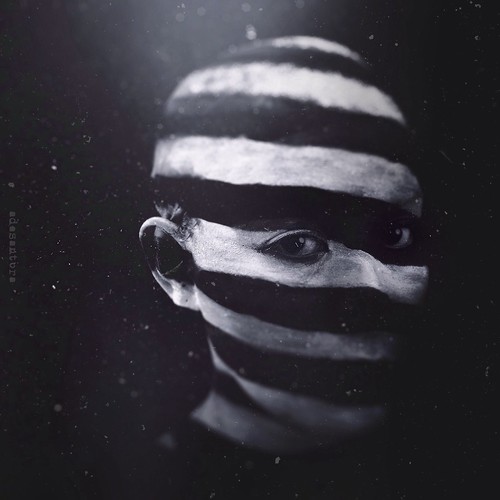 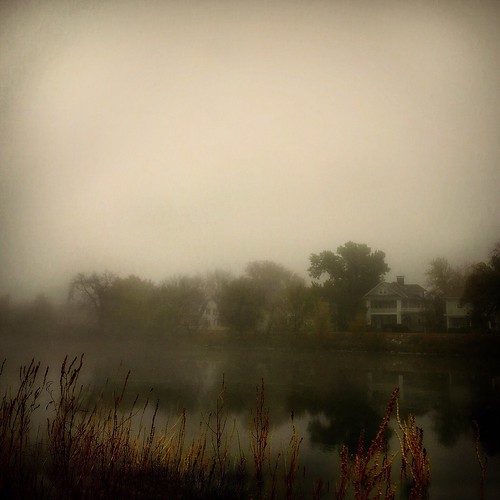 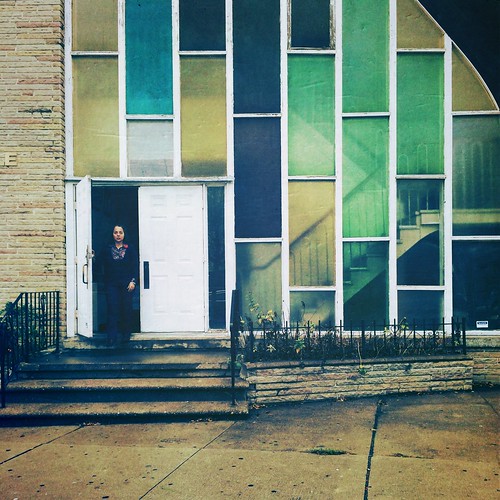 Apps used:I used Snapseed, Photogene, Handy Photo and Photo Toaster
Backstory: We get very little fog around here. I’ve always found this view very charming. So when the fog settled in , I wanted to see if I could get a shot.

Apps used:Hipstamatic Black and White
The Softness Just Before Dark
Backstory: I took my dog Larrabee for a run at a park on the Long Island Sound when I saw this scene next to the park. Couldn’t make it through the marshland to get to it, so raced out on the main road, rang the doorbell. No one was home, so I trespassed. The light was going fast and I got as close as I could without falling in the water. I used Snapseed to get going with it, then moved to Stackables to get texture in the sky and the colors evolved as I went along. I often don’t plot out a strategy for editing. More often, I go along with what is happening. Otherwise my images get over-apped and really don’t come from my heart.

Apps used: oggl AfterLight LightBoxr Snapseed PhotoPower mextures…
Backstory: When I got tired from reading a book, my cat jumped on the table. upon picking up my iPhone on the table I immediately held it. I aimed at between light and shadow. then he came.
actually I edited this photo about 2 months ago. but I couldn’t satisfied with it. so I left it in my camera roll. I didn’t record the apps I used, so I can’t remember all. few days ago I found it in my camera roll, I tuned minor adjustments and posted.