This week’s Apps Uncovered presents a selection of what I found to be the most compelling images for the week in our Flickr group, across a wide range of styles and subjects – but with one common theme: they all feature human faces, or suggestions of faces. One of the most fascinating things that we all, as observers in the world, and as admirers of photographic work, gravitate toward is the human face.

This week’s lead artwork, Estrella Morente II by borisbschulz2009, is a captured still from a YouTube film that draws the focus immediately to the eyes with the high contrast treatment applied using Brushstroke. 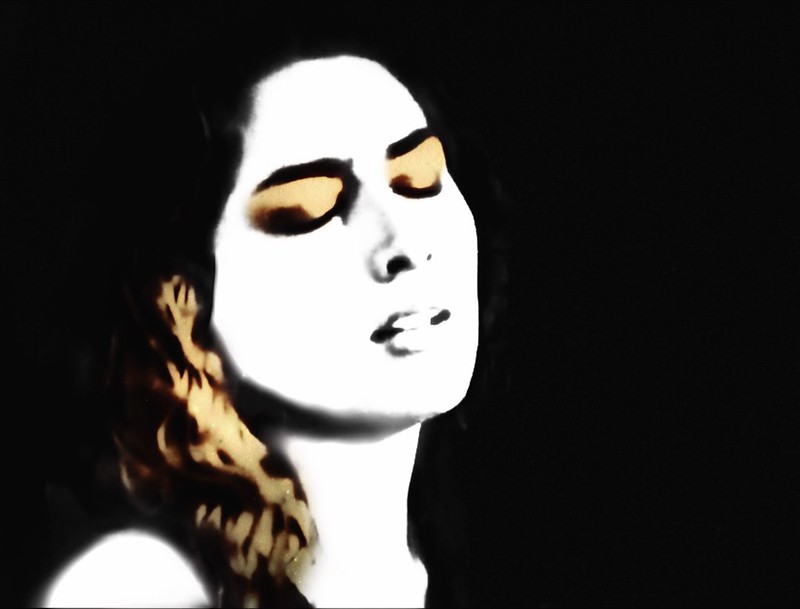 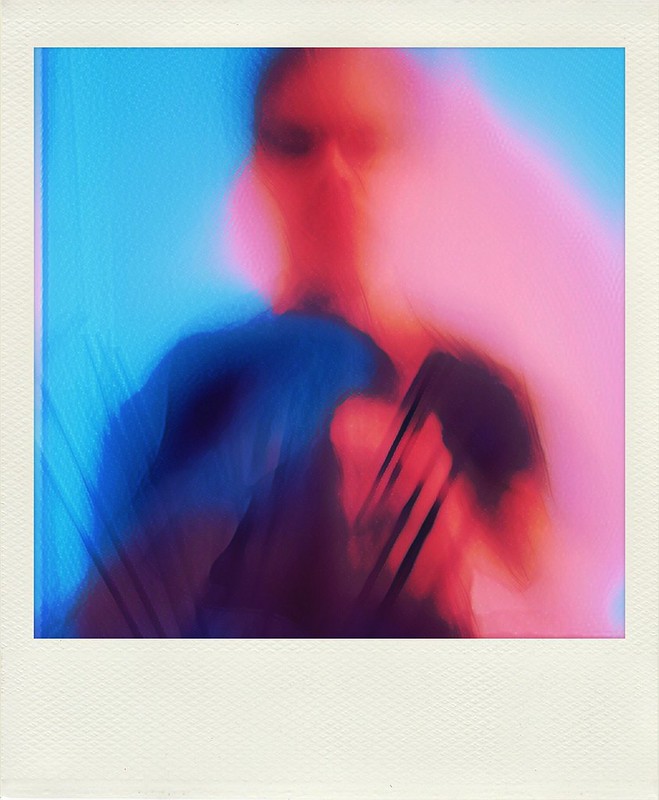 The red pill or the blue pill by Andy Chapman

Apps used and backstory: The photo is a shot of me in misty bathroom mirror, I too the shot using the Bluristic app to enhance the mist / blur. The red and blue colours came from a Prisma filter that I applied. I then tweaked the contrast and saturation in Snapseed (still my goto app for processing) and then added the frame using Polamatic. 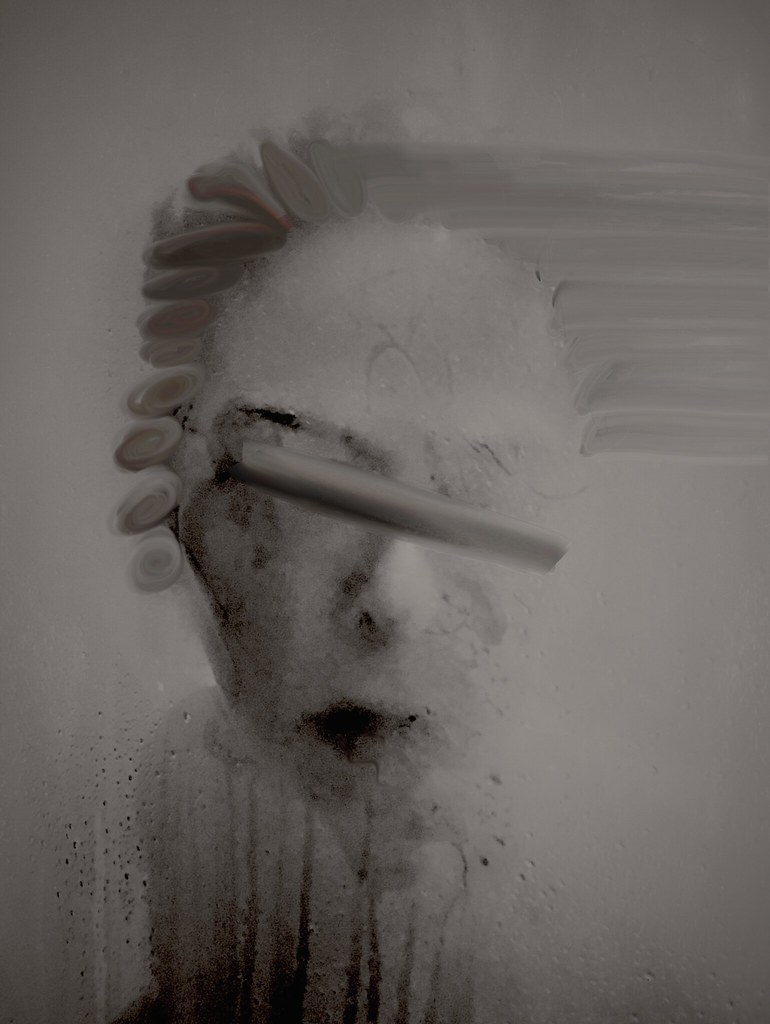 See no evil by before.1st.light

Apps used and backstory: “See no evil” is one of three linked images from a continuing series “Alone behind the pane”. It is a political statement on today’s times, describing two personas, those that shut out reality to convince themselves and others who do it to survive. I shot this image with Hipstamatic and edited it with ArtRage, iColorama, LightBrush, and Hipstamatic. 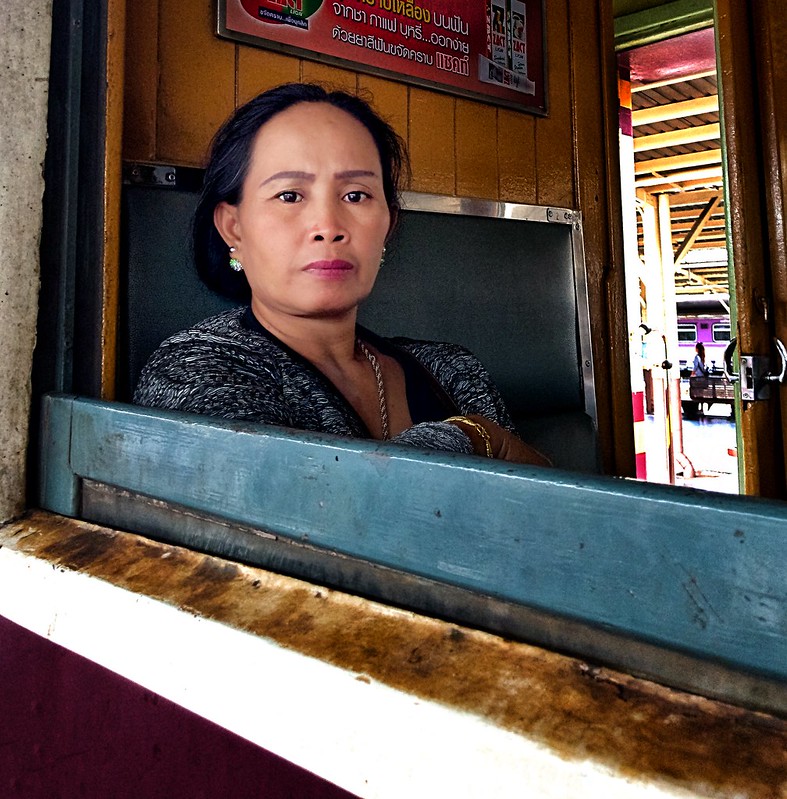 “Back when I was a young girl, I got on a train like this and left my lover…” by Paul Yan

Backstory: Having participated and given a lecture on mobile photography at the 8 X 8 Street Photography Workshop/Exhibition/Event conducted by Monogram Asia in Bangkok on April 29 and 30 (http://www.monogramasia.com/8×8-in-review/) (https://www.youtube.com/watch?v=oCVQ4LUqBEA&list=PL7YmxSi6lsYIcyiIGCxXNOjz1FRMVerDT&t=26s&index=1), I stayed in Bangkok for a few days of vacation and street photography sprees. I got up early one morning and went roaming in Bangkok’s 100-year old Hua Lamphong Train Station (Bangkok Railway Station) for the first time. While strolling one of the platforms, I saw this woman in a parked train, waiting for departure, whose facial expression and posture suggested to me that she was deeply immersed in a thought. Her serenity and aged beauty attracted me to go up to her. As I could not speak Thai, I nodded at her with a smile, slightly bowing and palms joined courteously to show my respect, and pointed at my phone’s lens and then to her, saying “OK?” She smiled and nodded gently as a way of approving my request, and went back to her pensiveness. I didn’t ask her to look at the lens and just made one frame after quickly adjusting the ISO, shutter speed and white balance in the ProCamera app. I said “thank you very much”, again slightly bowing with my palms joined, and then moved on. It was a brief 5-second encounter but left a warm deep impression in my mind. I’m very grateful to the lady for her kind permission. May you always be in peace and joy, ma’am.

Post-processing was done with Snapseed in which “Spotlight 2” in [Face Enhance] was used to lighten up the face; highlights and saturation were slightly increased in [Tune Image]; the top quarter of the frame was then discarded in [Crop].

Apps used and backstory: This is a recent portrait of one of my neighbors and his pet dog, a female Imperial Shih Tzu. I wanted to show the genuine relationship of this seasoned, older man for his youthful pet. After taking several frames, this one, in particular, shows something, in the man’s face, not only of his struggles with life but also that particular tenderness and solicitude that characterizes his feeling for his little dog.
I shot this with an iPhone 7Plus, in Portrait mode. Post Processing was done in VSCO, using the fr4 preset. All major image adjustments were done within VSCO with some additional finishing steps in Snapseed. 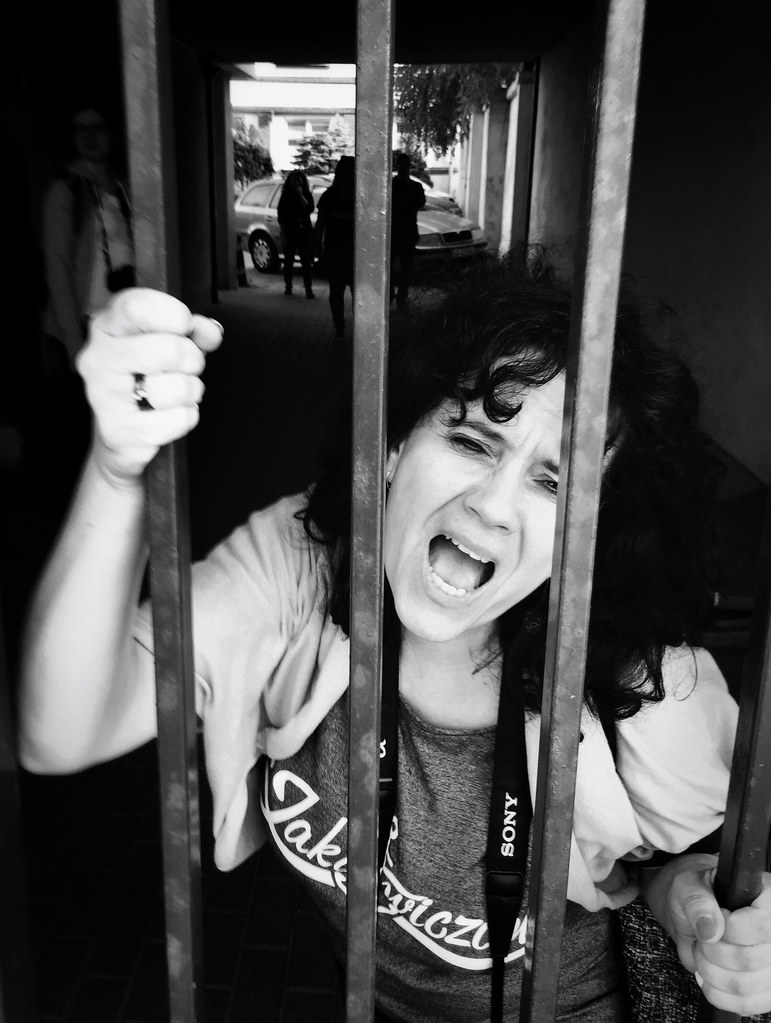 Apps used: VSCO with b4 preset
Backstory: Pictures like this one occur when you are taken by surprise and have to make quick decisions. It is a good anecdote behind a recent photoshoot, during which our team concentrated on capturing Gdynia modernist architecture from the perspective of backyards or other less usual corners. Because of time limitations, we were rather fast in moving and it iwas so easy for each of us to lag behind preparing for a shoot. At one moment, while our group was heading for the next building, a few people realised there were far behind us and tried to find a shortcut to catch up with us. They actually did, but the gate was locked…. Joan (Asia) the woman you can see in the foreground revealed her talents for spontaeous acting. Her humorous distance and a graceful expression of despair needed my photographic instinct and a quick reaction. Fortunately, I could concentrate on that as my IPhone camera was opened.
In postproduction I knew I was dealing with an image with a strong conceptual message, but also representing street photography, street portrait, photojournalism and attitudes issues.
I have chosen monochrome edition, working mostly with juxtaposing Asia and the background. Levels of contrast, highlighting and some presets were generally enough to enhance the basic Snapseed edition. 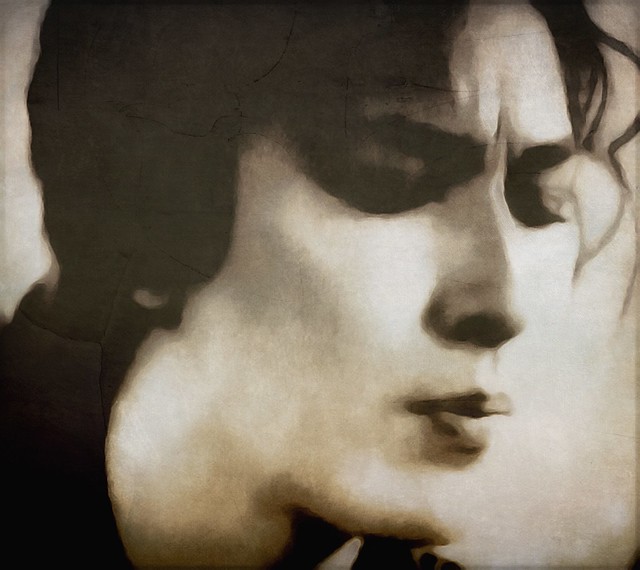 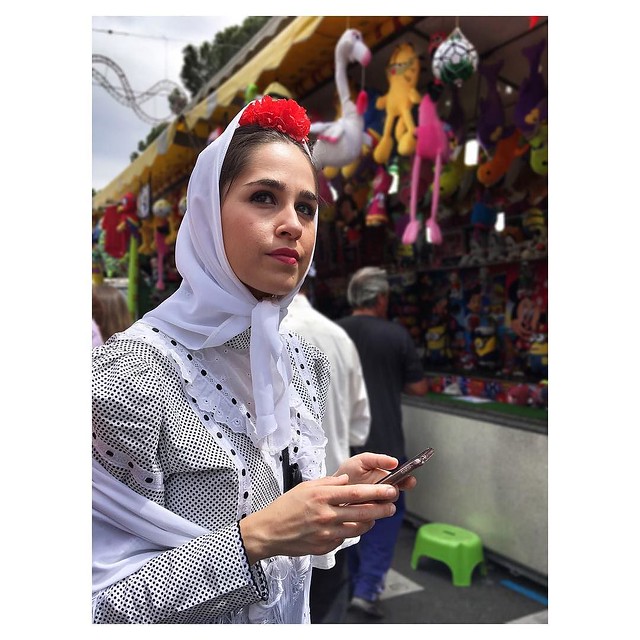 Apps used and backstory: The picture was shot on my IPhone 6S and then edited with Snapseed for slight adjustments of contrast and light, and with TadaaSLR to blur the background.

It was shot on the “San Isidro” Prairie” San Isidro is Madrid´s saint, and we celebrate his birthday on May 15th. People wear Madrid´s traditional costumes and go to this place to spend the day. It only happens a week every year, so I decided to go with my family and take as many shots as I could. I wandered among the people with my IPhone´s camera ready to shoot. I saw this beatuful “chulapa” with her lost glance, as if she was wondering about something, approached her and took a few shots. It was a very quick snap, as they usually are.

The story ends beautifully because someone recognised her on the pic, tagged her, and she left a very sweet comment thanking me for the shot. I was greatly surprised she didn´t get angry at me for sharing this portrait without her permission, so I thank her for her gentleness by sending the pic to her. My gift for her generosity. 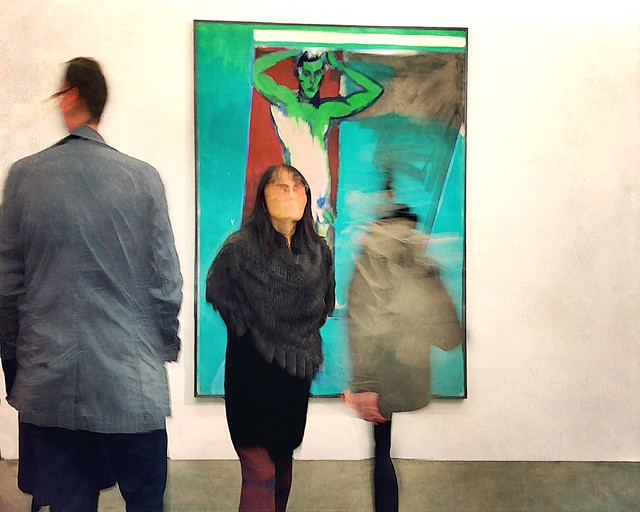 Walk Away by Karen Axelrad

Apps used: Slow Shutter, Snapseed, iColorama, Photoshop Fix, Stackablesapp
Backstory: I love photographing people at art exhibits with the Slow Shutter app. In the background is a painting by the German artist Rainer Fetting. The people become anonymous through the blur created by the long exposure, but their movements create the interest. I started with general processing in Snapseed, then I exported the photo to iColorama to enhance the colors and effect. In PhotoshopFix, I removed some items from the wall, and finally, I added texture in Stackablesapp. One could interpret the look on the face of the woman walking away as consternation caused by the green penis. Or not. 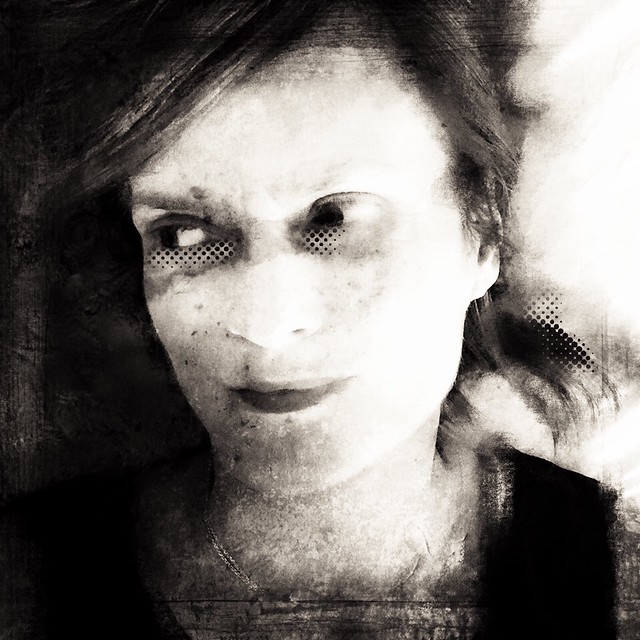 Apps used and backstory: Repix, Snapseed, Distressed FX and Stackables. The image is a self portrait that is meant to convey the feeling of overwhelming human sadness. My art helps me express what words cannot.