Welcome to the first (and very late) Apps Uncovered of 2014; a year that promises no end of breath-taking iPhone art and photography talent judging by our latest gallery of outstanding images. Janine Graf stole the lead image with her fantastic journeying rhinoceros entitled “Roadside assistance”. Janine has produced a whole series of these which never fail to make me smile or howl with laughter and “Roadside assistance” was no exception. Please click on her image to see more witty images from this artist including a rather cool giraffe series.

Despite my excitement about the New Year my remaining selections leaned towards the darker side of iPhone art and photography- perhaps the last two weeks of almost non-stop rainfall in the UK has influenced these choices – but each of these images are beautiful in their own way. Thank you all for your outstanding contributions and may all iPhoneographers and artists have an amazingly creative year ahead. I wish you an outstanding 2014!

I am delighted to announce that at last, one half of iPhoneographyCentral – that’s me Nicki Fitz-Gerald – will be visiting the US with my partner and 12 year old son this year. The first visit will be a holiday to Florida in April and we are planning a second visit to the LA area later this year, probably in August, for a few weeks to do some iPhoneography workshops and generally meet up with fellow iPhoneographers. We are trying to organise everything right now and although we will be booking some accommodation, if anyone has the space to host 3 small, well-behaved Brits (myself, partner and 12 year old) for a few days, that would greatly help us out. We would of course be happy to return the favour should any obliging hosts wish to stay with us in the UK for a few days. Please contact nicki@iPhoneographyCentral.com if you are interested and/or would like to know more. -Nicki- 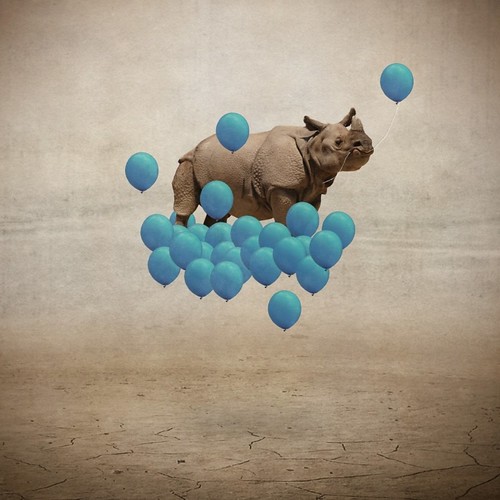 My son was in a fender bender (his fault) the other day. Thankfully, and most importantly, he and everyone involved are fine. Not too sure about the state of the car though; waiting for the insurance person to give their verdict. Gulp.

lake in december by David DeNagel

This photo was shot a few days before Christmas at a lake where I live. It was very cold, Due to a recent ice and snow storm the landscape was even more beautiful.
I visit this lake often. I do this in all seasons but make it a special point to do so in Winter when the landscape’s formal elements are most prominent. In this instance, I noticed a flock of ducks and geese had also gathered in a small inlet at the base of a hill. I knew ,that as I approached, the birds would start to head for the center of the lake. So I skirted around and ahead of their path in order to line up the shot for the composition I wanted. Sure enough, they began to move and I waited until these four wild Canadian Geese moved into the area I wanted for artistic purposes.
Apps used: I took this as a straight Hipstamatic Oggl image. No other apps. Since, I wanted the formal elements to stand out , I chose to process this in black & white with the Jane Lens & Black Keys Supergrain film combo. 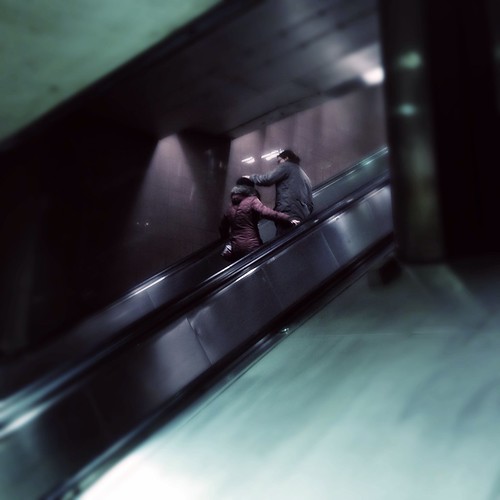 Is this love? by Anne-Martine Parent

This photo was taken on Christmas day in Grand Central subway station in New York (I don’t live there. Unfortunately, I was there only for a few days). I was coming out of the subway when I noticed the escalators, and how a portion of them were “framed” by walls and pillars. I also liked the light that fell on it. It created a great composition so I stood there and waited for people to come by. I took a few pictures, and chose this one for the gesture of the man and the intimacy that emanated from the couple.

Apps used: I shot it with Hipstamatic oggl, and later selected the Tinto lens to further enhance the couple’s intimacy. I picked the C16 film (one of my favorite), which desaturates a little, to couterbalance the high saturation and darkening effect of Tinto. 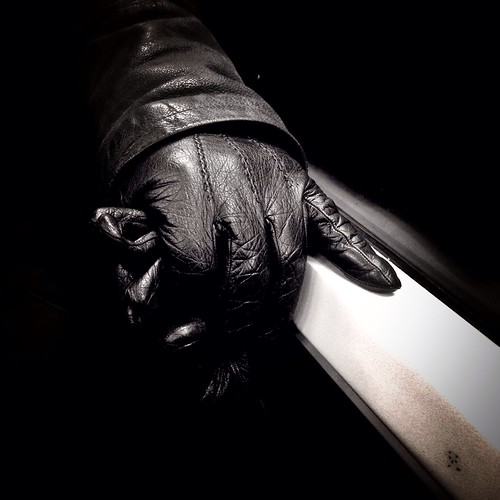 Technique and Apps used: I use the app Camera+ for shooting. Then I transformed the picture into black and white using the app Super Noire. I used Snapseed to blacken a bit and bring out the details.
I like to use a lot of contrast in my photos and love to take photos of the hands of the people in the subway. I think the hands speak much. I am very discreet and always take my photos secretly.
I also love photographing people who read
When I ride in the subway I always try to position myself in the best place to take pictures of my subject’s hands. 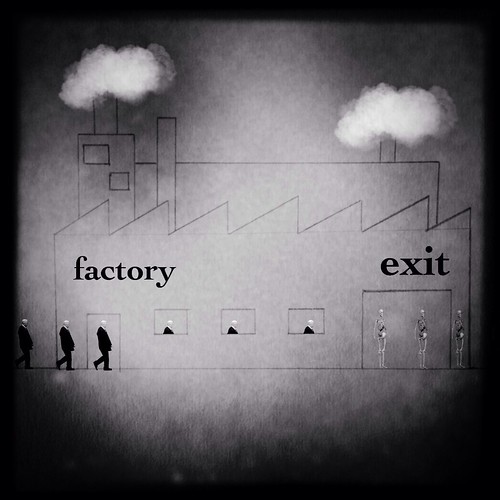 The human condition by Cedric Blanchon

Backstory and Apps used: This photo is born from my desire for a new form of creation. I began by drawing a design on paper creating the factory drawing and then photographing it. I used Juxtapose app to add the man walking into the factory then VFXstudio app for skeletons and clouds. A+signature app was used to create the words “factory” and “exit”, and Oggl for black and white. For me, the factory represents life, you arrive for work,(live), and then you go out (you’re dead), my father and mother spent their lives working in the factory for over forty years, when I think it’s scary. It’s a allegory of life of many people I think. 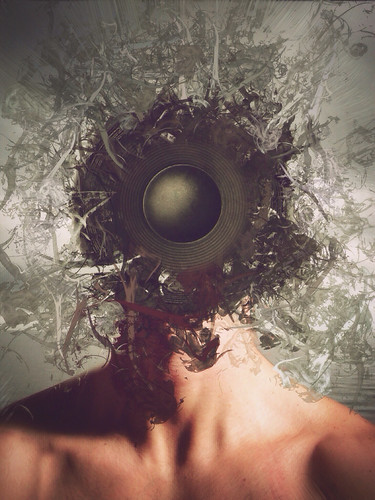 Express Yourself! by Brandon Kidwell

Backstory: I am part of the AMPt community and our current challenge was “selfless” in this I took a series of photos of myself and tried to visually express a state of mind or state of being. This image was inspired by shyness and the thought that life is too short to live behind a veil or insecurity or inability to act upon your wishes at the appropriate time.
Apps: Camera+, PSTouch, Filterstorm, iColorama, VSCOCam, Foolproof and PicFx and Mextures
Process: First image taken on iPhone with Camera+, image then imported into PS Touch where I highlighted and extracted my body from the background and layered it over an image of the open waters of the Gulf. I then imported that image into Filterstorm and masked the image of the speaker onto my face. I imported the layered image into iColorama using the Explode Effect (preset 5/7, size roughly .75 and edge .50) to apply the motion splatter effect. Imported into Foolproof to add the scrape effect which I then masked slightly into the previous image to give the effect of air movement blasting out. From there I imported into VSCOCam, then to PicFx for desired coloring and feel. Finally imported into Mextures for finishing implied texture and vignette. 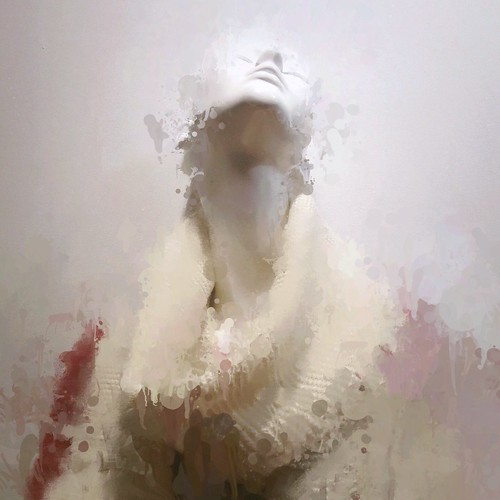 Lady “No Name” VI by by AlexVisage

This work was filmed on iPhone 4S. I used the programs Snapseed, Repics, Photoshop Express and FaceTune. 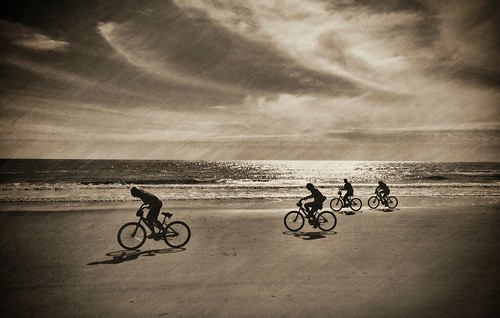 Edited on ipad with Snapseed and Laminar 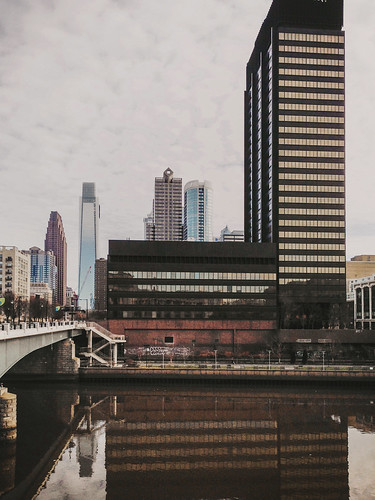 Backstory: I was passing time, waiting for a bus for a bus at 30st station on Thanksgiving. I took a shot of the Philadelphia Electric building across the river. That one I processed as a B&W. This time I was waiting for the bus at Christmas Day. I thought I would give it another try. Same Kitcam but used Brooklyn film effect since the day was more overcast this time. This effect brought out the older, industrial nature of the building and river and contrasted it with the much newer Comcast building and curved Murano Condos.

Backstory and apps used: This image came together rather easily…I looked out my bedroom window after a recent snow shower to find that a car had left these tyre tracks in the snow. I’m sure it wasn’t deliberate to make the heart shapes…and just happened to have my iphone5 with me at the time (o:…. so I grabbed the shot! I cropped and adjusted the contrast, etc. using PS Express. Simple as that! 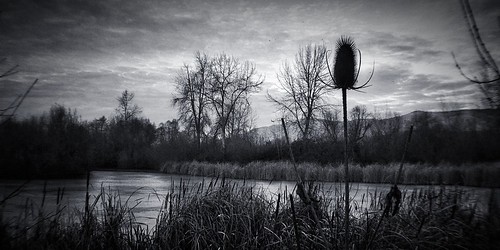 Backstory: My Talent, Oregon, backyard borders beautiful Bear Creek and my iPhone5S, my dog, Blaze, and I walk on the creek trail almost every afternoon. Year-round proximity to the creek has me as a witness of this fragile ecosystem and triggered a series of mobile photographs and mobile paintings I call “Bear Creek Witness.” This shot was made at the end of a bitter mid-December snow storm that gave me a serious case of cabin fever. For over two weeks, I could go outside with my iPhone 5S for only short periods of time, but the cold drove me back in quickly. Either my fingers would freeze or the battery would die really fast. (Friends on Flickr and EyeEm have been listening to me complain about the cold for weeks.)

Using a wide angle clip-on lens
“Savage Beauty” was made  late afternoon, as the dark was gathering. I got an iPhone clip-on lens as a stocking stuffer and thought I’d try out the wide-angle. (With freezing fingers, this is not something I’d recommend again.) The cold rising off the frozen wetland made it challenging to handhold the phone and the clip on lens, but I did enjoy being able to add an even wider angle to the Classic Pan frame.

Apps used:
When I got back into the house and warmed my fingers enough to see what I really got, I was excited by the light and the framing. The color capture, however, didn’t show the way it felt to be there. I used OldPhoto to make a sepia-toned conversion which I then layered with the best color exposure using Superimposer. Still not satisfied with the feeling, I moved into iColorama and worked the layered shot through tone lab and then into two different duotones, one warm and one cold.  The final shot is an iColorama blend of the two duotones set to feel black-and-white while still transmitting the subtle color of how it felt to be there on such a cold, dark winter’s day.