We always have so many great images posted to our Flickr group each week, so it’s especially hard to select a handful that stand out. Sometimes as I start looking, a theme suggests itself – and that’s what happened this past week. There seemed to be a lot of pictures that were still lifes, or represented captured details that, taken together, felt a bit like a still life. I know that sounds a bit arbitrary, but work with me for a minute. I don’t think you’ll find any of these short of excellent, and as a group they make an intriguing collection.

This week’s lead artwork, by iPhoneographic artist and fairly regular iPhoneography Central contributor Dominique Torrent is a fascinating and surreal piece that has a look very close to my own heart. In fact, at first I was concerned I might not be able to include it because it didn’t appear to be a still life. But when Dominique added the backstory information we traditionally request, I learned that the statue and the bust in shadow were both captured in a museum setting. So – a still life of sorts! 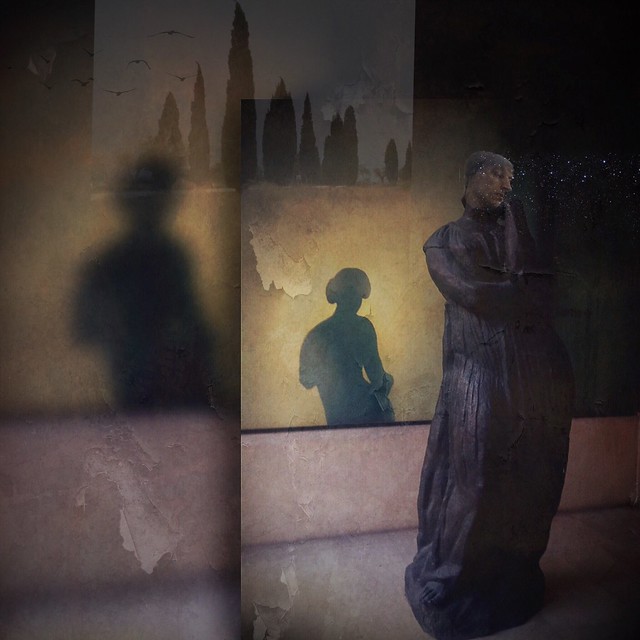 The Astrologer by Dominique Torrent

Apps used: Square ready, Stackables, Blender, AlienSky
Back story: I shot the original image in my favorite museum in Paris, Antoine Bourdelle. The staging was there, made with the statue and a bust in shadow. I used Stackables to make crumbled wall, Square ready to create a square in the square and double the shadow, Blender to add a window with nature, and as i love ambiguity the statue got a man’s head and became an androgine being . I add a milky way on his face with AlienSky. Then the title became obvious. 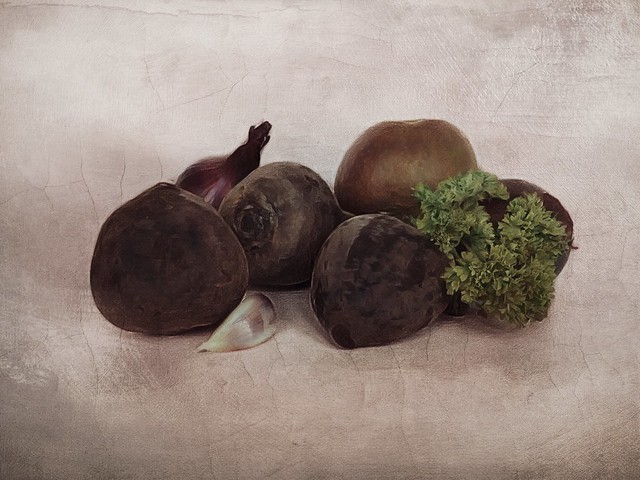 Apps used: iPhone6, Hipstamatic, Leonardo, Polamatic, Moldiv, Picfx,PicsArt, Shift
Backstory: All started here with a Hipstamatic flash photo at night, outside at the street in my neighborhood, of the chair, because no longer needed of someone. A nice way as objects or furniture changing the owners with the idea using the useless before the bulk trash. Started then blending the picture and background, with a part of a window. The Polamatic photo was original an autumn leaf, taken with the prism mobile lensbaby lens LM-30, playing with the picture in picture idea and using some textures. and the last process was thinking about the title and adding the surmountable fence with the wish to stay on the other side of the shadow existence, where hope, joy and perspective for a meaningful future are to realize. 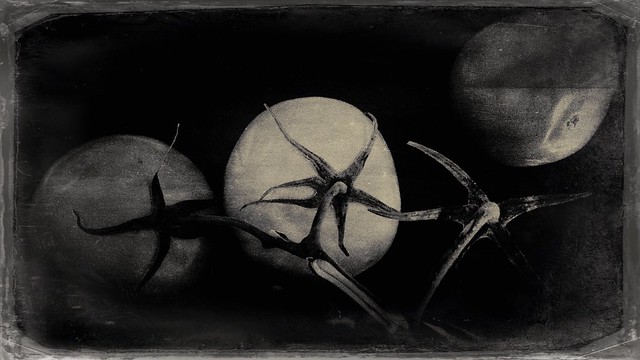 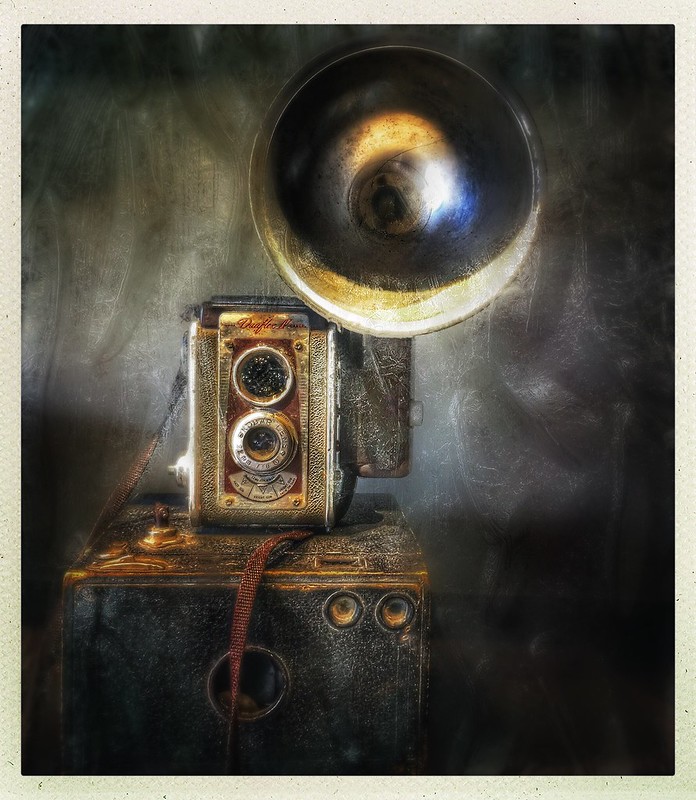 Portrait of a Camera by Kate Zari Roberts

Apps used: Snapseed, iColorama, Hipstamatic
Backstory: I found this beautiful camera in a hat shop and wanted to create the look of an old fashioned portrait. I like to use elements from the day’s shoot so I used a photo of an ice sculpture as the background.

Throw away by David Hayes

Apps used: Snapseed, Stackables
Backstory: There isn’t much of a backstory to this image…just an afternoon session dedicated to some “faffing”…throwing some pieces together into a still life and shooting them from different angles. This is something I like to do just to keep my creative juices flowing! 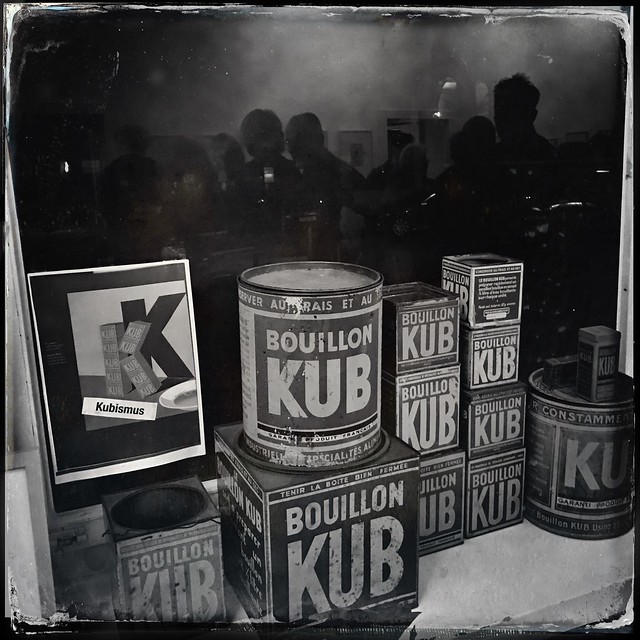 The Art Opening by Karen Axelrad

Apps used and backstory: I was at the gallery opening of Ann Wertheimer’s exhibition “Collages and Ready mades”. I was drawn to the stack of “readymade’s” in the window with the reflection of the people in the gallery. I tried shooting with various combinations in Hipstamatic, but ultimately I post-processed in HIpstamatic using the John S lens, D-Type Plate Film and Redeye Gel Flash. I felt that this combination gave an aged feeling that went well with the flea market stack of cans and boxes.

Apps used: Taken with an iPhone 7 plus telephoto. I also used an Ultrapod 2 mini tripod, Reticam mount,Mooni remote and a simple black backdrop. I shot with the Manual app, in both RAW & Jpeg. I developed the image in Carbon BW. Finally, I used Handy Photo to clone in areas of the background to provide a uniform blackness.

Backstory: The key word to this still life is austerity.

Three object groups: an old bronze Chinese vase, two red pears and some Fall Asters comprised, together, the material subject of the image. The darkness provided the venue.

I arranged the items carefully, so as to provide a flow, visually, from one to the other. The only illumination was diffuse and low and came from a nearby window to the left. Consequently, the objects seemed only to partially emerge, like three shy actors huddled together on an inky black stage. The accents from the window light, provided the sole, tangible reminder of their very part and presence in this simple drama. 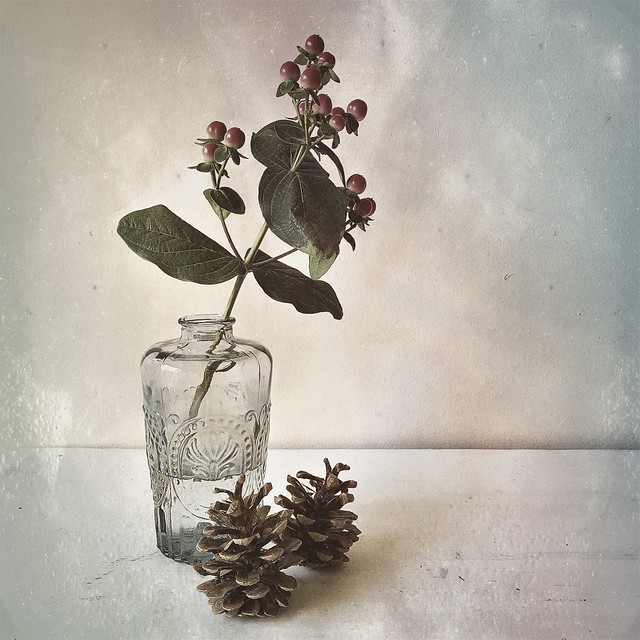 Apps used: The shot was taken with Hipstamatic on my iPhone 6s+. I chose Bruno Lens and C-Type film and did some adjustments in the editing suite.

Backstory: I always have one or two small vases in my home with seasonal flowers in it.
It looks pretty and they’re nice to photograph as well.