This week my selections pretty much had the same motivation as last time. Images to which I was immediately drawn. A year-end potpourri of iPhoneographical deliciousness. A most happy and creative new year to everyone! (Yes… I make up words, from time to time!)

Apps Used: The photo was shot in RAW using the ProCamera app on iPhone7+.
It was then edited on the iPhone using the Adobe Photoshop Express app.
Backstory: One cold morning, while waiting for my bus in Sutton, I noticed the “luminous” head behind the fogged glass of the bus shelter. I had only time to shoot one picture because my bus was just pulling in. 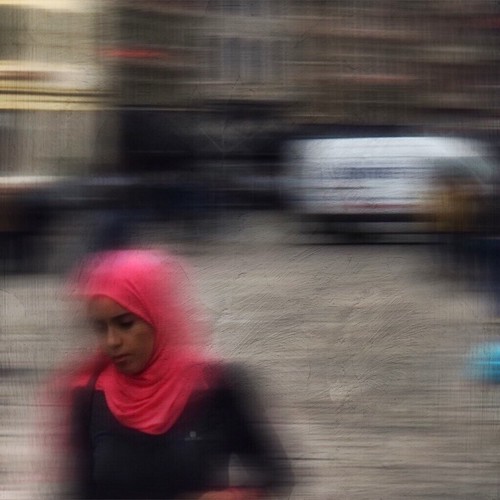 Apps Used: Shot on iPhone 8+ with the ProCamera app; post-processed with ACDSee Pro and Snapseed.
Backstory: The birth-aging-death life process of all beings, including humans, is a perpetually recurring cycle that has no cessation. Just like the alternation of seasons in which leaves grow and fall over again, we’re ever getting closer to our decease with the passage of time right from the moment of every birth and rebirth. To lead a colourful life in peace and joy is to acknowledge and embrace impermanence. We’re only alive in the here-and-now.
So don’t fear the reaper. He’s only an illusive silhouette reflected in the water! 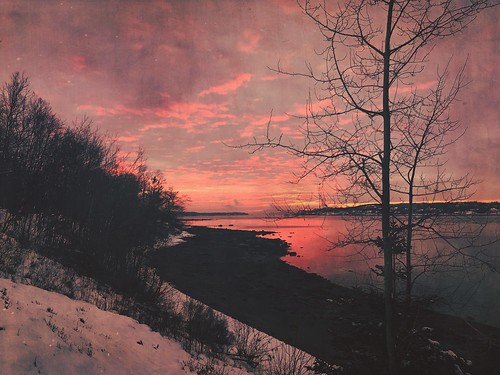 Apps Used: This photo was taken with the Hipstamatic app and then edited with the Mextures app.
Backstory: It’s a view that I love and I have taken many shots from this spot. The beauty never ceases to amaze me. 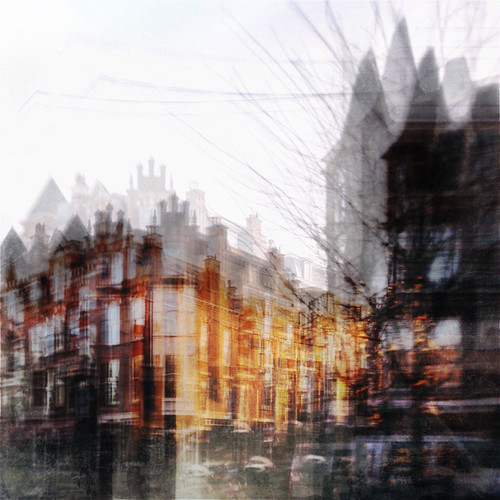 Apps Used: Johannes (@Pytebyte on IG) was so kind to give me a promocode to his app “Bluristic” (this is the app this image was shot with) and on a fairly sunny day, I ventured out to experiment. I’m not a huge fan of “panned” images, so I tried something else. Liked this shifting effect a lot and decided to work with this image. Cropped in Squaready and polished up the tones in Snapseed.
Backstory: The shot is from my neighbourhood, which is an architectural delight. 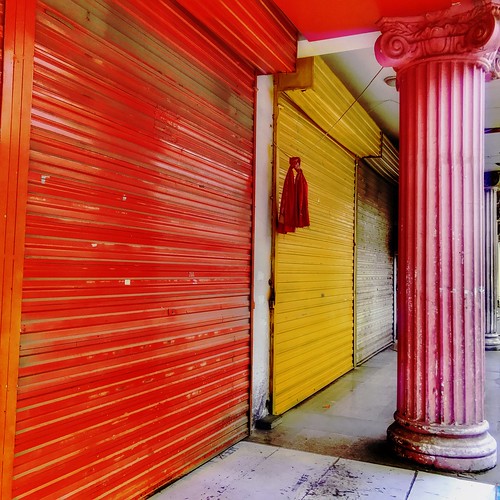 Apps Used: I shot with the iPhone 7+ default camera and edited with Snapseed and with Hipstamatic (Frankling lens and Radama film).
Backstory: This was a series of closed shops in Zhangye, China. The colors and patterns of lines were irresistible and the red cloth hanging in front of the yellow one seemed to be put there to be photographed. Overall, the photo conveys well the feeling of this empty street on an early morning in March.

Apps Used: Shot with an iPhone 6+ on iOS 11, rear facing camera, using Apple’s default camera app. Edited using Apple’s Photos app and the Silvertone filter to create the black and white look. Some tweaks to contrast and brightness.
Backstory: The shot was taken on a busy New York City street. It was a cold and rainy night during the holiday rush hours. I often find myself wandering about in traffic to capture these scenes. It’s amazing how we all can easily get caught up in it all. 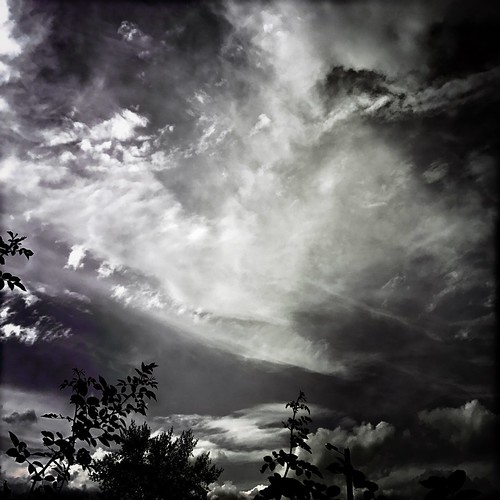 Backstory: With editing of this photo, I had a lot of experiments, and it was very difficult to choose exactly which edition was the best for me. But finally I abandoned all colorful versions. I think, this colorless one is more expressive than any of colorful ones. I believe such edition emphasizes awesomeness of the clouds and immensity of the sky! 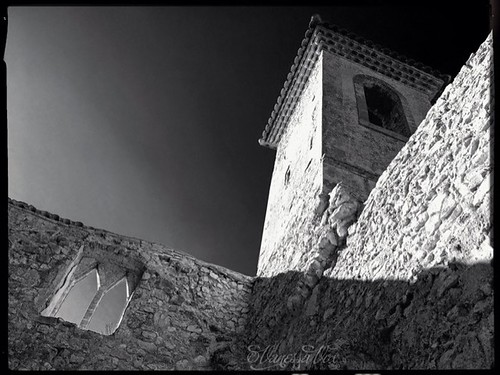 Apps Used and Backstory: Hipstamatic, iColorama
The special character of a ruin is that the interior space of a past time slowly transforms into an outer space. This little church in the south of France has lost its roof over the centuries. On the photo you only see a majestic tower and an abandoned wall with an open window. I stood in the shadow of this wall. A shadow which reminds me of the dark nave. The strongly illuminated tower and the window are witness to the rising sun behind the wall. When I took the pic my eyes were caught by the light. The B&W Hipstamatic combo (Scott S, Blackeys IR) finally emphasized the high contrast light scenario.

Apps Used: Hipstamatic, iColorama
Backstory: Visible traces of time and decay. We look at dense rows of old books in a overfilled castle library. This is a monochrome snapshot from the hip. I tried to accentuate the ancient character as well as the fragile feel of old paper. 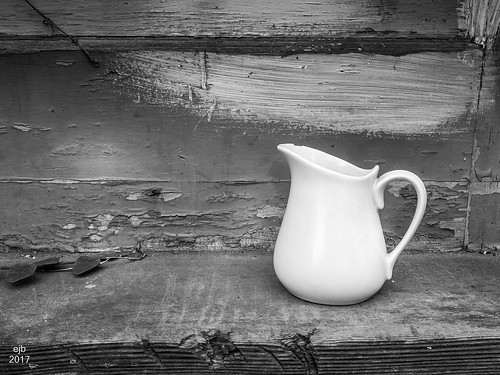 Apps Used: The photo was taken with the iPhone and processed in Lightroom. No other apps used.
Backstory: The pitcher was on a stoop in an alley I often visit on my dog walking duties. I’ve been there dozens of times before and photographed it all, but this time there was the pitcher. I had to shoot quickly, as my dog was heading off in a different direction. In a word, serendipity!
. 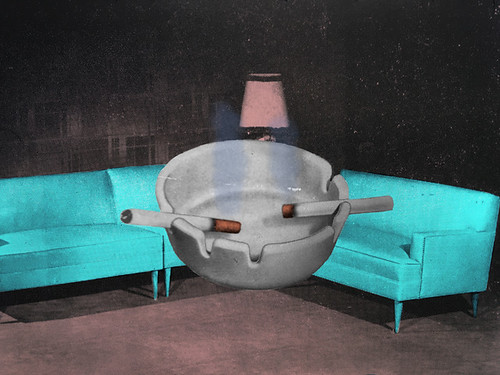 Apps Used: The photos used in “Break Room’ were shot with my iPad Pro. The apps used were Snapseed and Procreate.
Backstory: In addition to photography, I do a lot of collage work, both hand made and digital, and this has led to my exploring ways of making collage type work on the iPad, beyond the built-in stacking effects found in several apps. Break Room is the result of my first attempt to use Procreate to make a collage. The photos are both appropriated, shot with my iPad pro from a 1950’s era catalog of hospital supplies (in the 1950’s, ashtrays were apparently standard hospital supplies!) Both the room and the ashtray were B&W photos in the catalog. I used Snapseed just to increase the contrast a bit and remove a yellowish cast from my desk lights. The photos were colored and assembled in Procreate, and the blue-gray smoke was painted in as well.

It was the bleakness of that room with the dark walls that attracted my attention. This was in the waiting room furniture section of the catalog, and cool retro furniture aside, it looks like about the last place you’d want to spend time while waiting for a medical procedure or for news of a loved one. Two cigarettes in the ashtray suggests a human presence, but not seeing anyone in the photo gives an emotional coldness that I felt fit the piece.