Recently a strange blue hue illuminated the NYC skyline.
A friend of mine said her immediate thoughts found her back in class during the events of 9/11. A sudden, unexpected event that jarred her and her classmate through a days travel …hoping for a safe journey home.
Thankfully , on Thursday evening eastern standard time, there was no major catastrophe nor an alien invasion.
She found herself intrigued by folks first instinct, picking up their phones to document the event.
In one second our lives can be throughly altered. Often we are reminded to have a go bag ready in the event of some unforeseen occurrence that demands quick and decisive action.
At the same time, having close at hand a tool to document every and any second can prove to be useful in many ways.
This site focuses on those of us who tend to use our mobile device as an apparatus to our creative ventures.
Our lead image by Oola Cristina is fitting as the last post for this year.
Opening with a relevant question on many minds, ‘what might the future bring’ it invites us to consider both past and present realities.
It sparkles with a palette that echos hope for things to come while acknowledging the vignette of times passage, shadowing remnants that find one semi melancholic…questioning over and over , ‘what might the future bring’…
In the coming days, some of us will find ourselves learning to not write an 8 over a 9, some of us will use this new year as an opportunity to set new goals, some of us might not register time the same as the Roman calendar and therefore find days forwards as just that.
Either way…’tomorrow is the first day of the rest of your life.’
May each one of you reading this post lean towards tomorrow with hope, love and truth. I know I will.
*
Thank you  :Oola Cristina, Jo Sullivan, Salwa Afef, Kathy Clay, Paul Ewing, Jean Hutter, Cristina Rossi,Michael Beresin, Tomaso Belloni, The McBee, for submitting your work to Iphoneography Central Flickr pool.
Thank you for adding the information necessary to make it easier for us to set this post up.
Thank you to Bob and Nicki for providing a platform for others to share their vision.
*
If you would like your work to be featured in future post here on IPC please add to Flickr group providing necessary information as well as enabling share.
Be good, be kind, be fair …be.
And may you all make art instead of war- be it via word or any other means that leads others to no so lovely futures. 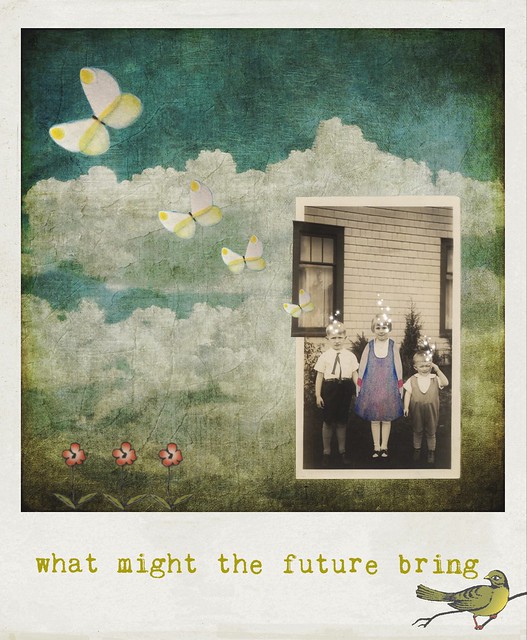 Backstory: One of my favorite secondhand bookshops has a small vintage flat file cabinet tucked into a narrow isle behind the children’s section. The whole bookstore is barely managed chaos. The cabinet is always covered with old maps, posters, handbills and dust and is hard to access. Last summer, I squeezed into the space and found some vintage photographs in the bottom two drawers. None had any identifying information, but looked to be c. 1900 – 1940. I felt like I had found treasure!

All these people who decades ago were children, who were just starting their adult life, who might have had their picture taken for their grandchildren… maybe some are now old… most have likely passed away. I love vintage photos. Even though they always bring some feelings of sadness, there is also always curiosity about the experiences these people had and who they became. What were their hopes? Were they content?

The photos are of the past but they bring thoughts of the future. My personal photos will most likely end up in a drawer or box in a second hand store one day too. Maybe, like these, they will become part of someone’s art. I would be good with that.

This is the first image I’ve made using one of those photos. The background is one of the bonus textures from the iColorama Creative Plus course. The additions to the photo and layering of the other found images was done using Leonardo and Pixelmator with the stars brushed in using Procreate. Tweaked a bit in Snapseed. Polaroid FX to add the frame and lettering. Then back to Leonardo to add the bird. 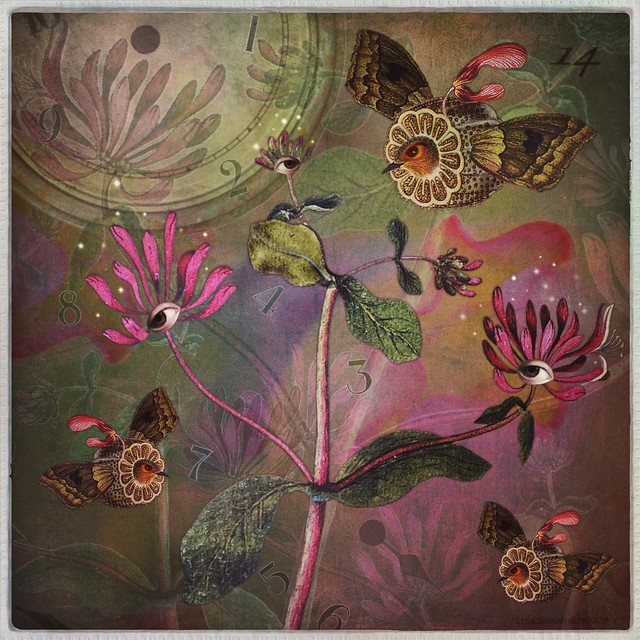 These creatures have shown up in two previous works and one decorative background. In two of the pieces, they are flying into a scene and, in the other, they are not the focus of attention. For a while, I’ve been wanting them to have the spotlight and in a native habitat.

Time is something that is often on my mind… the passing of time, where the time goes, being out of time and when we are in the flow of time. The clock in the background is both about the loss of time and timelessness. 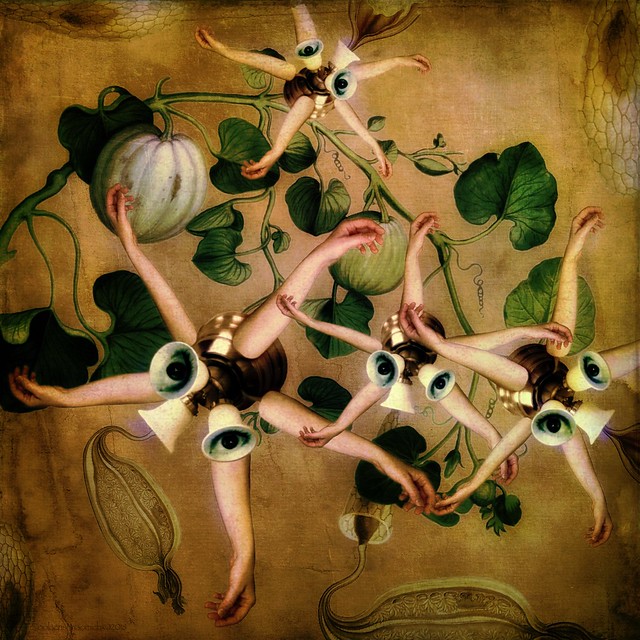 Backstory: This image is a collaboration with Jo Sullivan for a group challenge in NEM Surreal. Jo offered four images from which to choose to transform in whatever way we wanted. This piece was made from a photo of a ceiling fan.

I first used Leonardo to change the ceiling fan into something more creaturely with images of my eyes and arms, then duplicated it. The background is a Distressed FX texture onto which I layered the botanicals and ceiling fan “flowers”. Used Pixelmator to soften and blend the edges. Added a bit of glow in Snapseed, then finished using Hipstamatic filters that added a little depth. I might’ve used an Afterlight filter in there somewhere but I did several versions of this and didn’t write down the steps.

Once the image came together, a fanciful little story went through my head of this being a small corner of a large fresco discovered in a side chapel of some Renaissance church. Perhaps, painted by a monk in the grips of an ergot fueled, mixed up, slightly prophetic botanical vision. 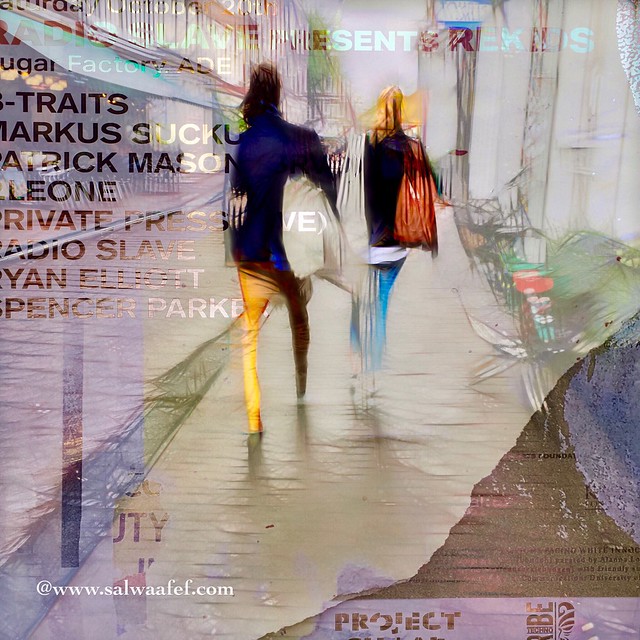 Backstory: I was Walking in Amsterdam, watching people body language and their styles, amazed by the art of street life, as well as I, love to watch many of that accidental street art and graffiti…etc.
later on, I have started the editing by some painterly touches in iColorama, blending many photos under the influence of the whole artistic atmosphere, I can say: recreate the art of that passing moment. 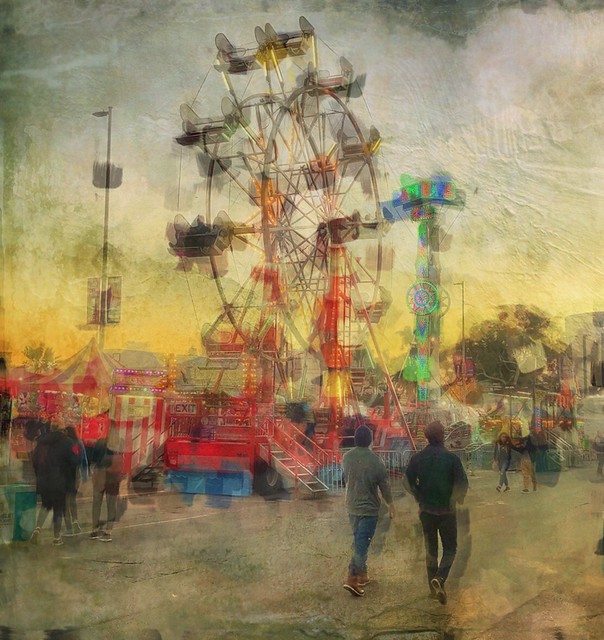 Apps used: IColorama, Distressed FX
There is an event every year in San Diego called December Nights which signals the start of the holiday season for us. Balboa Park is lit up with holiday lights and there is lots of food, drinks and music. There is also a carnival which is the subject of this image. 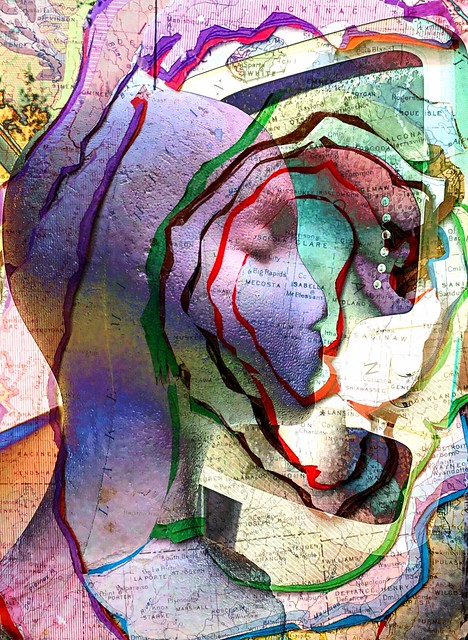 iPhoneography on iPhone 7 Plus using Superimpose, Aviary, and Instagram apps.

My final project in my 3D Design class this semester was to create a sculpture from a book. I decided to create a bas-relief of the geology of Michigan from my 1966 physical geology lab manual. Serendipitously, in the studio were three, clear plastic garbage bags of styrofoam heads. I pulled one out and took it home for another project. I photographed it, and using the “Difference” slider bar in Superimpose, I psychedelicized it. I got the idea that it might be interesting to layer a photo of the map over the head. Using the Superimpose ap, I did just that. I then tweaked the color and contrast using Aviary and Instagram. Oh, by the way, the other project was an all-white box with the illuminated styrofoam head hanging upside down inside it. See photo at left in my Flickr photostream.

My Russian friend Dmitry of Instagram, gave it this title, “«Дыхания Земли» [Breath of the Earth] 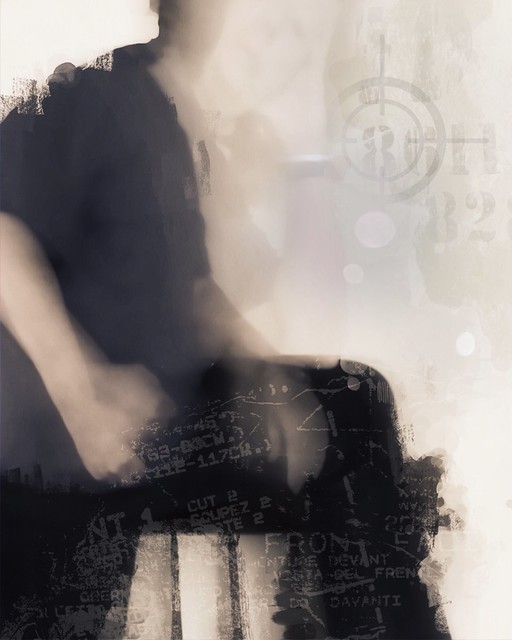 This was a very bury weird picture I took of myself in my hallway. Sometimes the worst photos make the most interesting digital art. 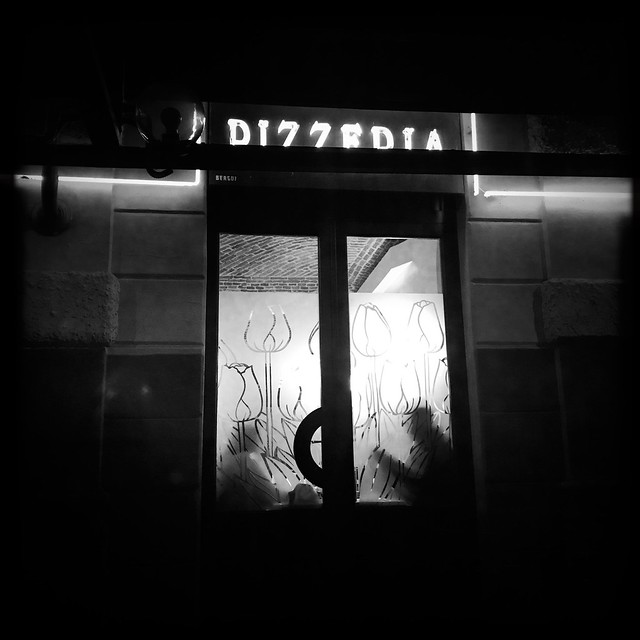 Hipstamatic, JohnS lens / BlacKeys Supergrain film, no edit. I just happened to walk by this pizzeria and I saw this couple through the glass window 🙂 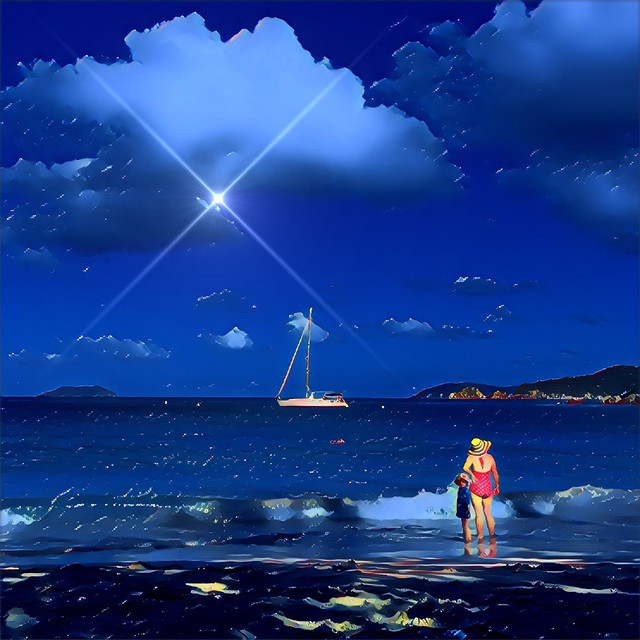 This image was taken in St John, the US Virgin Islands. I used the native iPhone app to take the photo and edited with Snapseed, Prisma and LensLight. 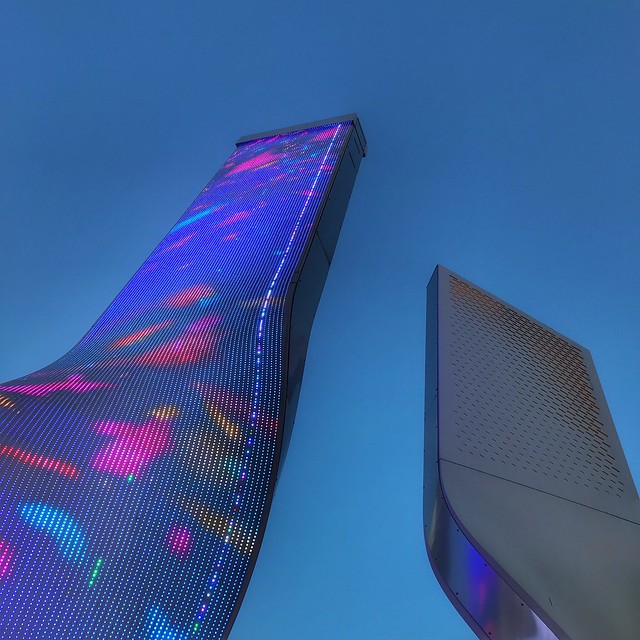 This is my second photo of these two objecs. They are large totems at the entrance of a shopping mall. On some other sides they must have useful info for visitors, but from this angle they look like improbable skyscrapers. In this version one was very colorful and gave it a different mood.
I shot with the iPhone 7plus standard camera app and edited in Snapseed. 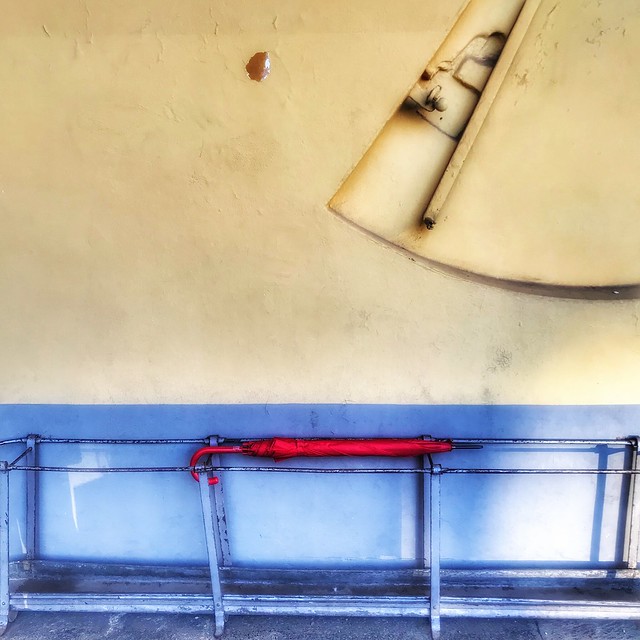 Tomaso Belloni . Just for the record

What else can you do when you are waiting in a courtyard on a cold December morning but look for photo opportunities? The red umbrella was just the right touch for this composition.
I shot with the iPhone 7plus standard camera app and edited in Snapseed. 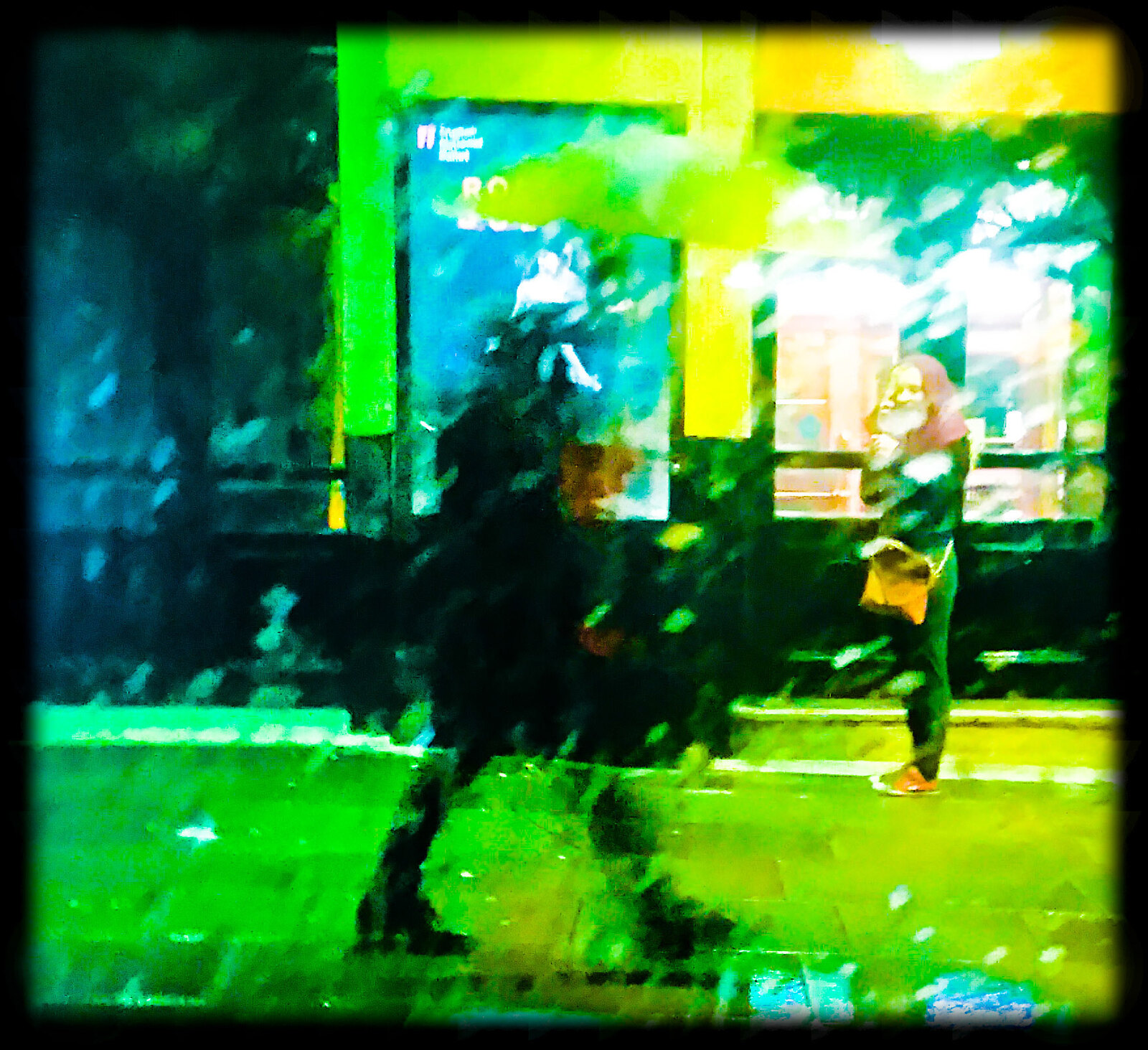 1) This was three years ago when I was using Photoshop Express almost all the time. It was my colourful period which was fun.
2) I was sat in rush hour traffic on a very wet evening in one of the busiest parts of the city. I spotted the woman with the umbrella as she passed the other static woman on her phone. The raindrops are on the passenger window of the car. It just summed up what wet weather in a UK city at rush hour is all about. 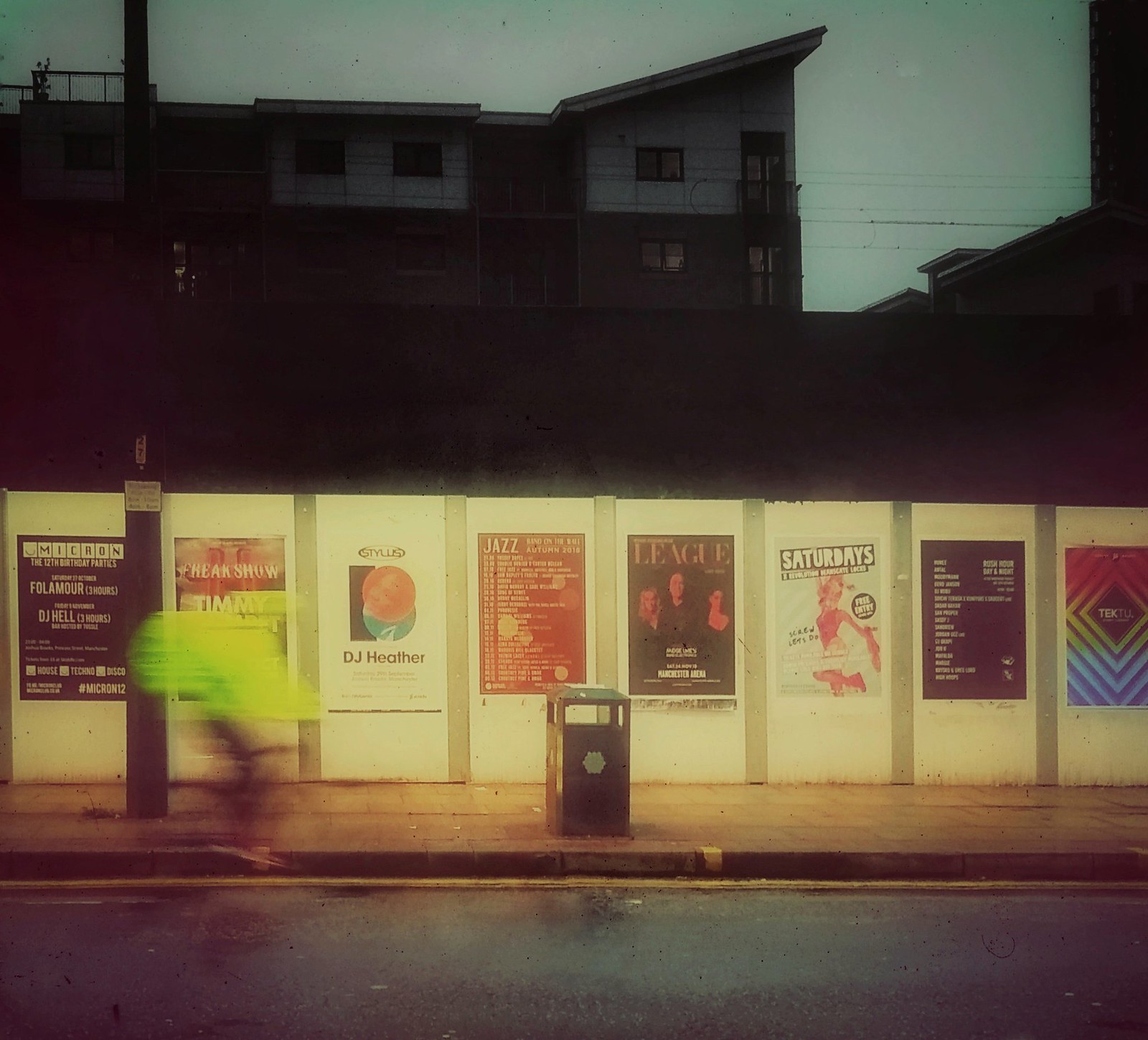 1) Edited mainly in Snapseed with a little bit in Photodirector.
2) I was in the city centre at dusk. There is so much building going on so the temporary fencing is everywhere and is a great background for my style of street photography. The flyposting on this one adds another dimension. The street lighting creates a slightly surreal ‘studio’ effect. 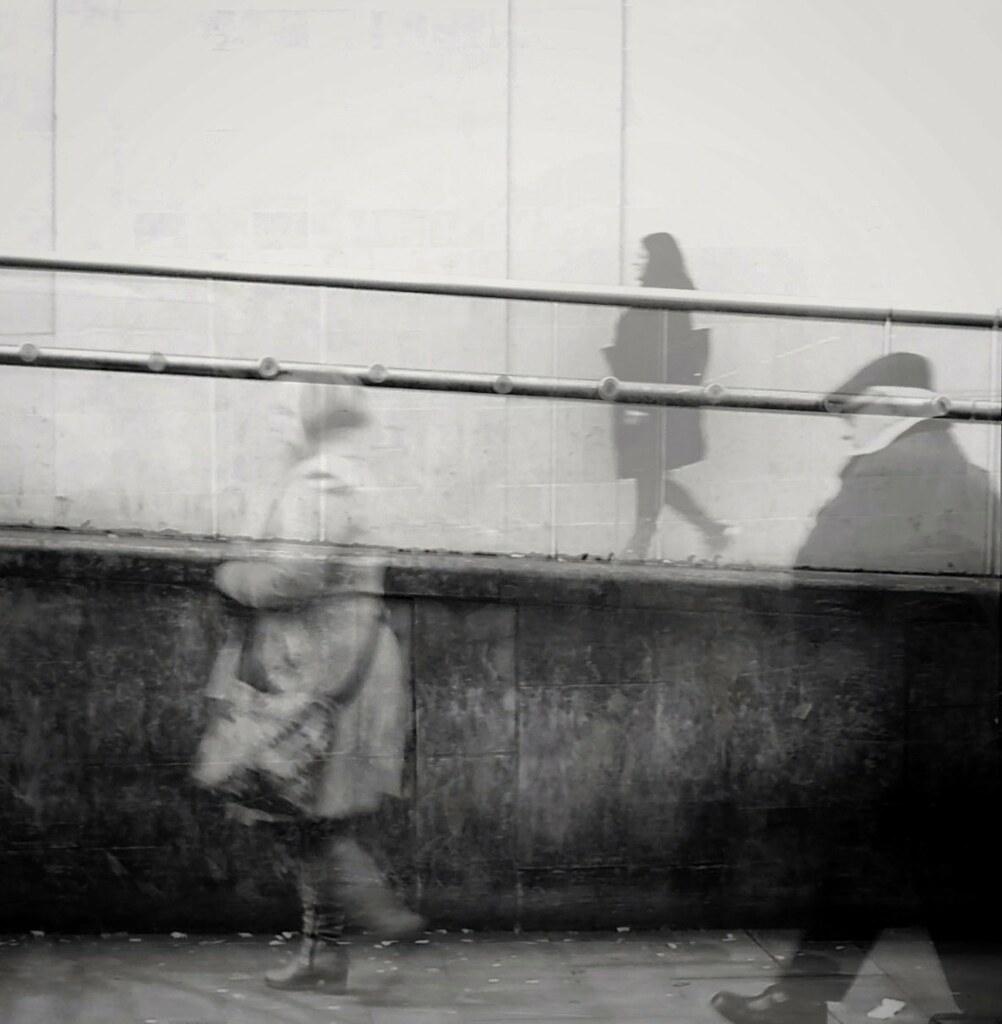 The McBee…The ghosts of Christmas shoppers past…

1) I used Snapseed, my favourite app adding textures and using the ‘double exposure’ tool .
2) I was sat waiting for a friend when I spotted the woman in the background and just took the photo. Then the elderly couple came past and I caught them. A couple of weeks later I looked at the images and thought of creating a diptych but as Christmas approached I had the idea of using A Christmas Carol as a cultural reference and using it to refer to the orgy of shopping. I’m not too keen on really ‘clean’ images as I quite like them to be a bit rough around the edges, like a sketch.