Welcome to this week’s Apps Uncovered. Maybe I’ve been spending too much time on Spotify but any one of the images selected this week I could easily imagine as album cover art with many exhibiting illustrative or graphic styles in their execution especially Anne Highfield’s wonderful photorealistic depiction of a beach scene entitled “Let’s get this party started”….and it’s Anne’s image that steals the lead spot this week and kicks off a beach sub-theme at the beginning of Apps Uncovered. Thank you Anne!

Thanks everyone for contributing your images and enjoy this week’s gallery. 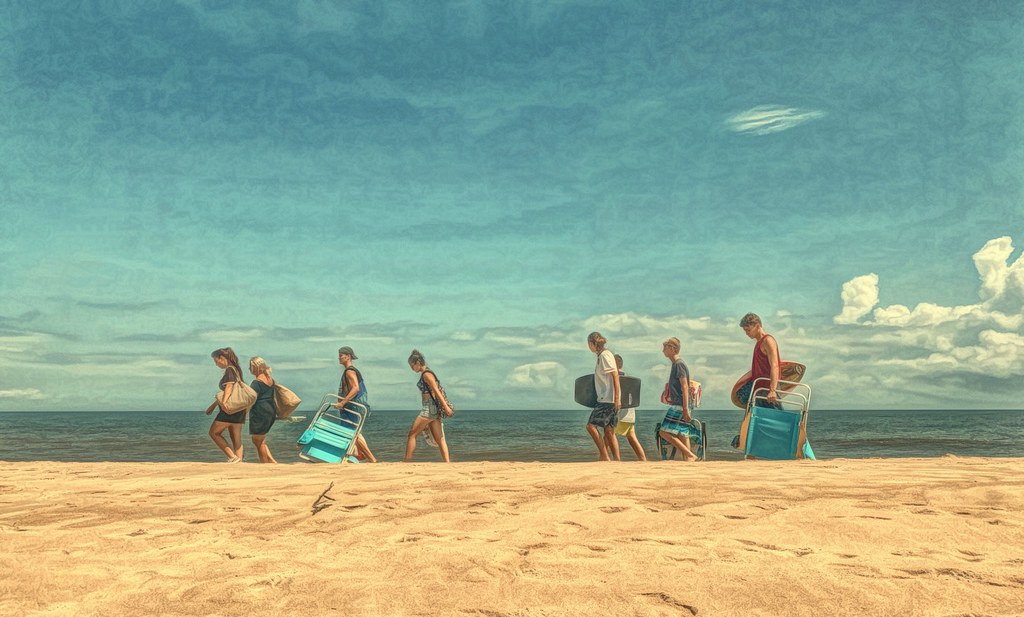 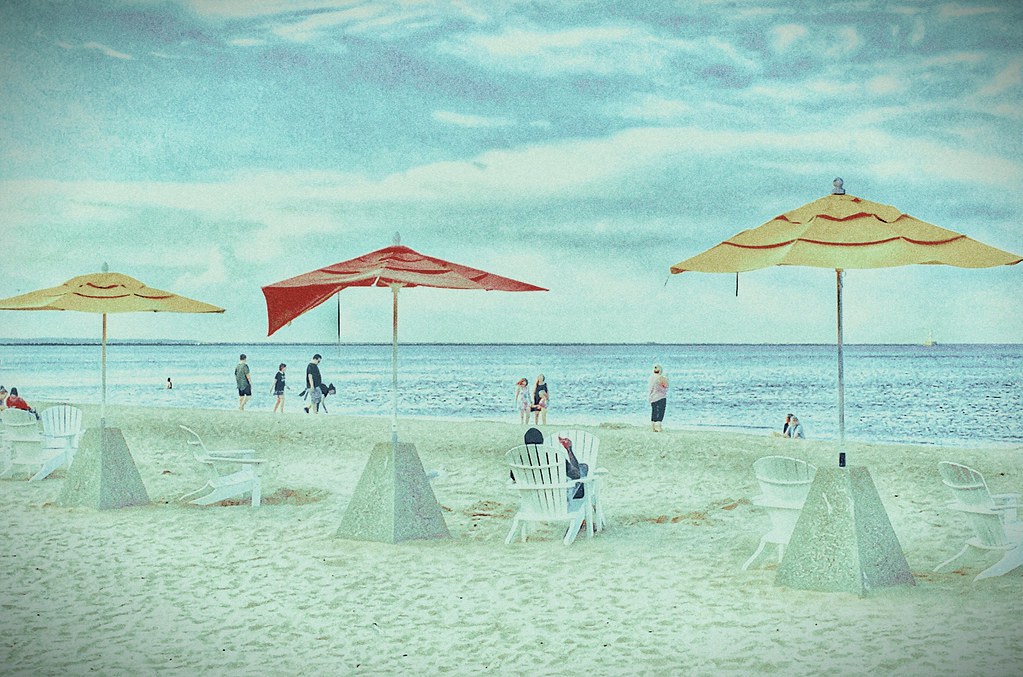 Summertime Blues by Debara Splendorio
App used: Shot with Camera+ and edited with Snapseed and Hipstamatic.
Backstory: My husband and I visited Cedar Point, Ohio last week. It’s the roller coaster capital of the world! Not that we rode any. We stayed nearby at the historic Breakers Hotel on the pristine shores of Lake Erie. The umbrellas and people on the beach reminded me of a vintage, illustrated beach postcard.  I used Camera+ to take the photo. The colors and clouds were enhanced in Snapseed with the HDR Scape, and Tonal Contrast tools. The Katerina lense, and Sponza 16 film in Hipstamatic, gave it the cool, desaturated color quality I was looking for. A classic beach scene. 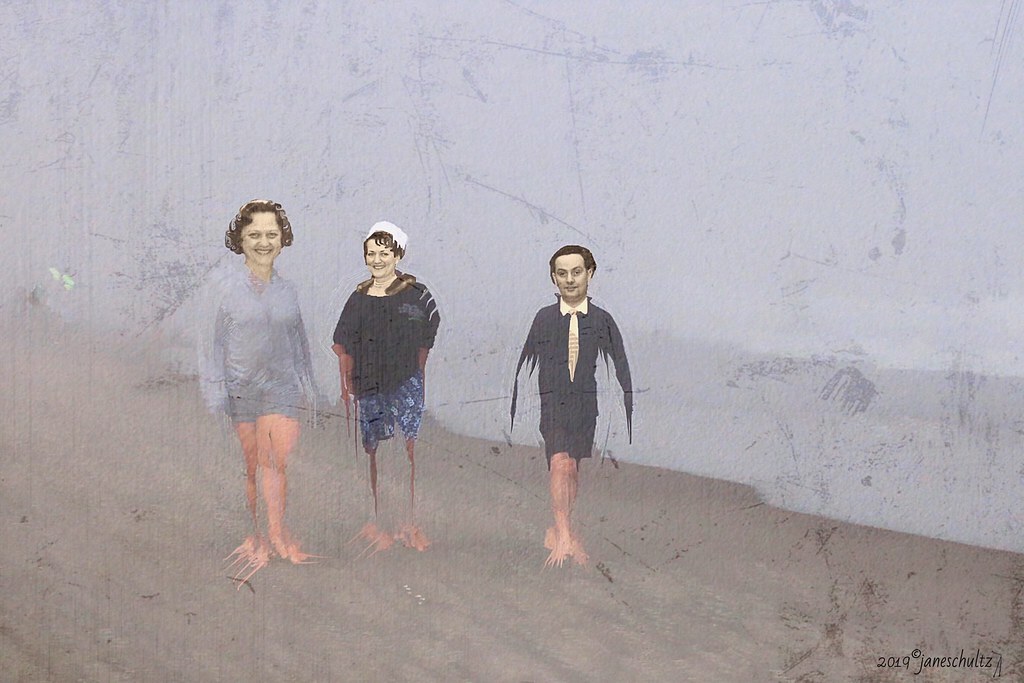 Slow Days at the Beach 2 by Jane Schultz

App used: SlowShutter, Juxtaposer, Scratchcam Backstory: Slow Days at the Beach 2
Backstory: I’ve been drawn to slow shutter images for years and take them all the time. The summer, I’ve been sorting through some old family photos and, in the spirit of the season, decided to create images with them and my beach slow shutters. This is the 2nd image in a series I’m working on. I am already excited to move this to a 2nd series “off beach”. 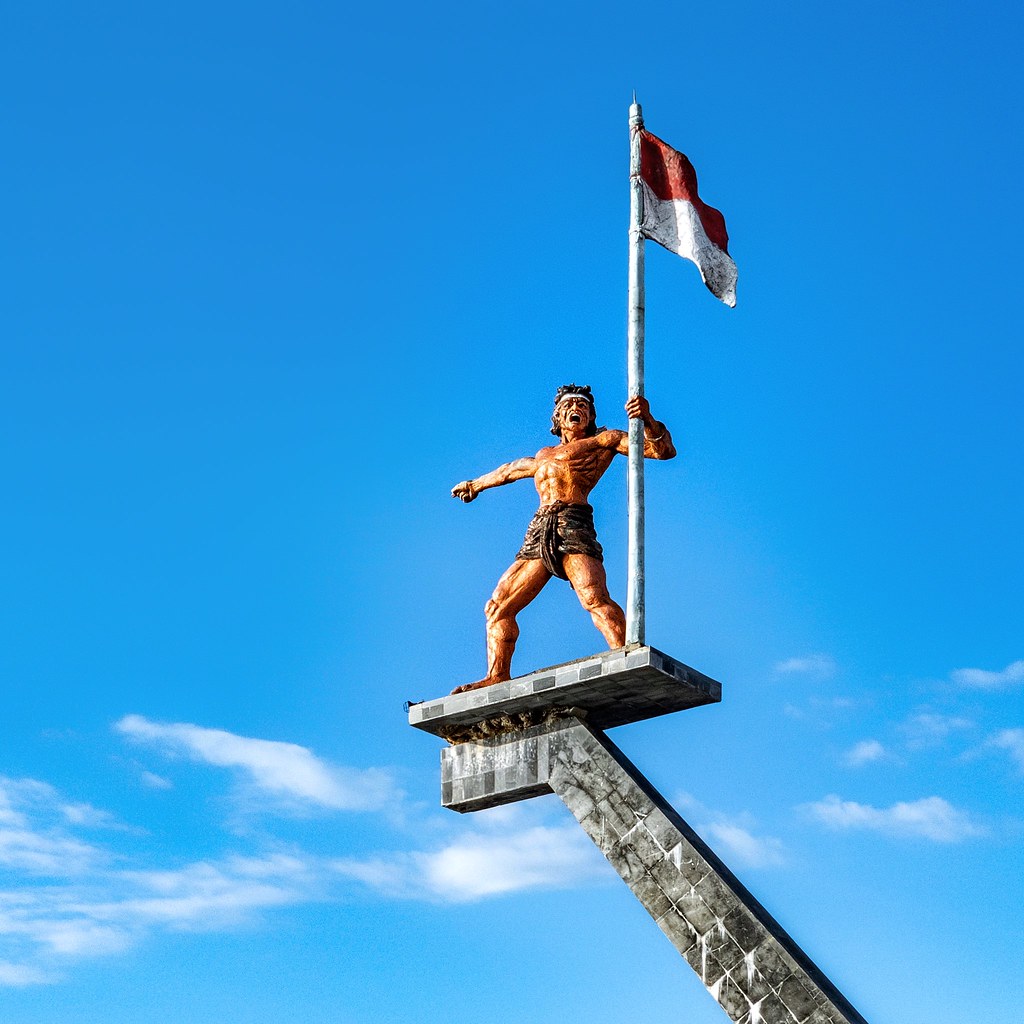 Backstory: This photograph of the masculine lookout statue on a high platform at the Singaraja waterfront was made during the second week of my vacation in the northern Buleleng province of Bali. The 52 mm lens was used as the statue was pretty high in the air.

The raw file was developed into jpeg in LightRoom Mobile and then lightly dodged and burned locally, and cropped to square aspect ratio in Snapseed. 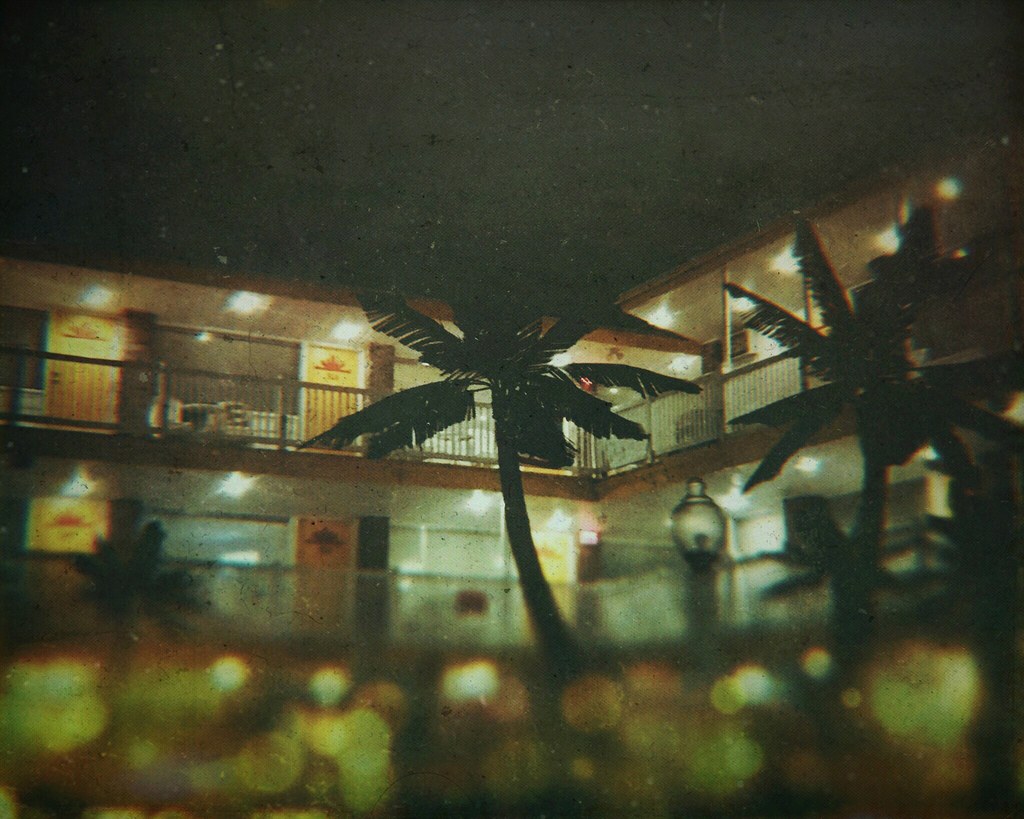 Third Floor by by Susan Blase (BLACK EYED SUZY)
Apps used: Tadaa, Mextures, Artist and Afterlight.
Backstory: This was taken in Wildwood, New Jersey. For those of you who don’t know…yes it’s “the Jersey shore” but this town is home to some amazing retro hotels. In this creation I used Tadaa to darken some of the tones and adjust focus. I used Mextures to add some grainy textures and Artist to add some bokeh on bottom. Afterlight is pretty much my last step in most of my work. I wish I recall the name of this hotel, but if you are ever in the area, this town is great to see at night! 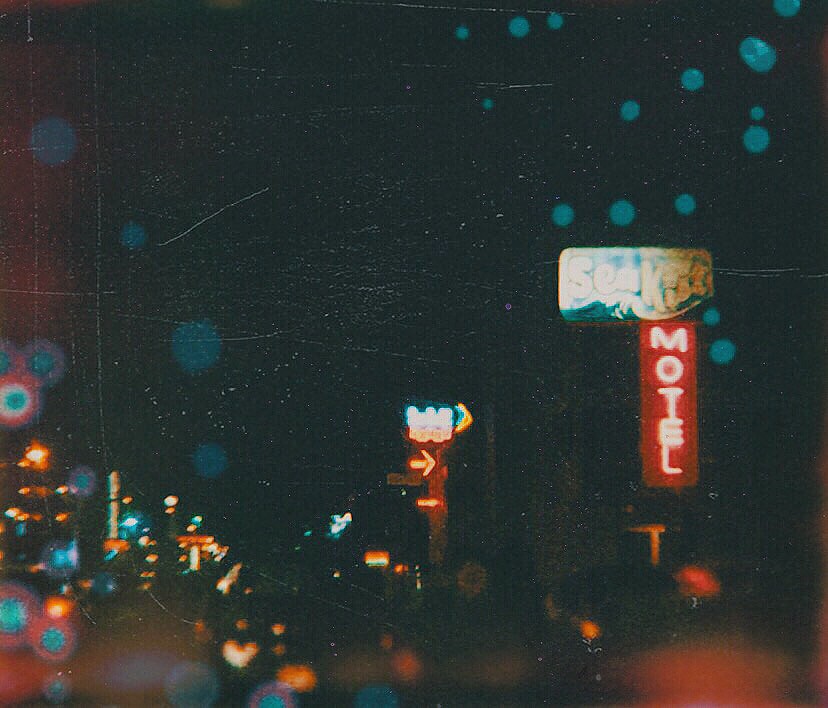 Once upon a time… by Susan Blase (BLACK EYED SUZY)
App used: 1967 and Afterlight  Backstory: This photo was taken in Woildwood, New Jersey as was my other photo featured this week. A really terrible photo technically but with just two apps I made this photo a big more interesting looking. 1967 is a new app for me but I am loving it. And Afterlight is my go to app when I need to give my pics an extra something. The title was a nod to the new Tarantino film. So I did my best to capture its essence by giving it a vintage edit. 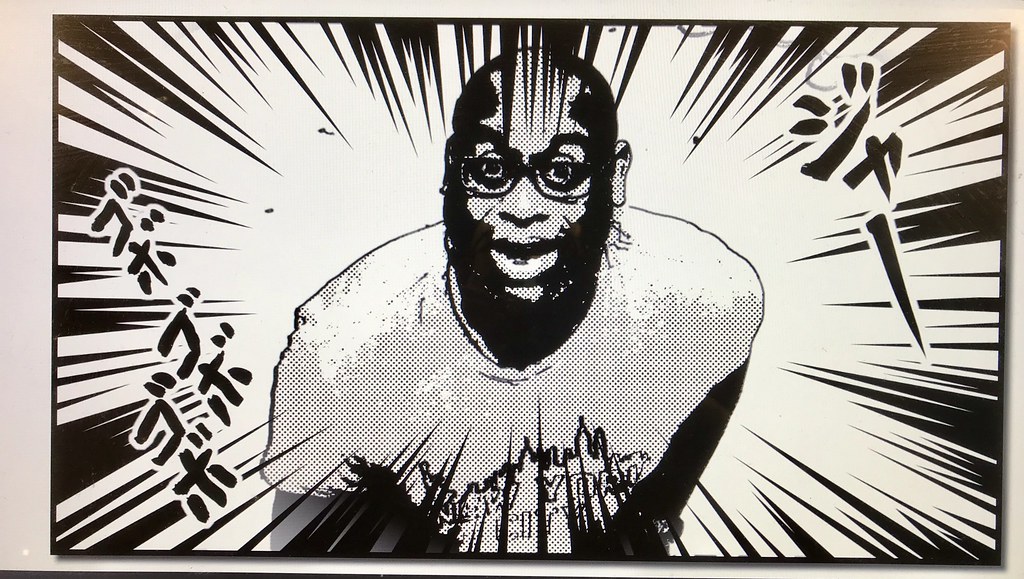 I’ve been Manga’d by TravellingMiles
Apps used: Shot on an iPhone 7 Plus. Post processed in Carbon, Snapseed and Handy Photo.
Backstory: This image came about during my visit to the Manga Exhibition at the British Museum. There was a camera at the exhibition which generates your photo as a Manga picture so there are no special filters or apps used in this image. 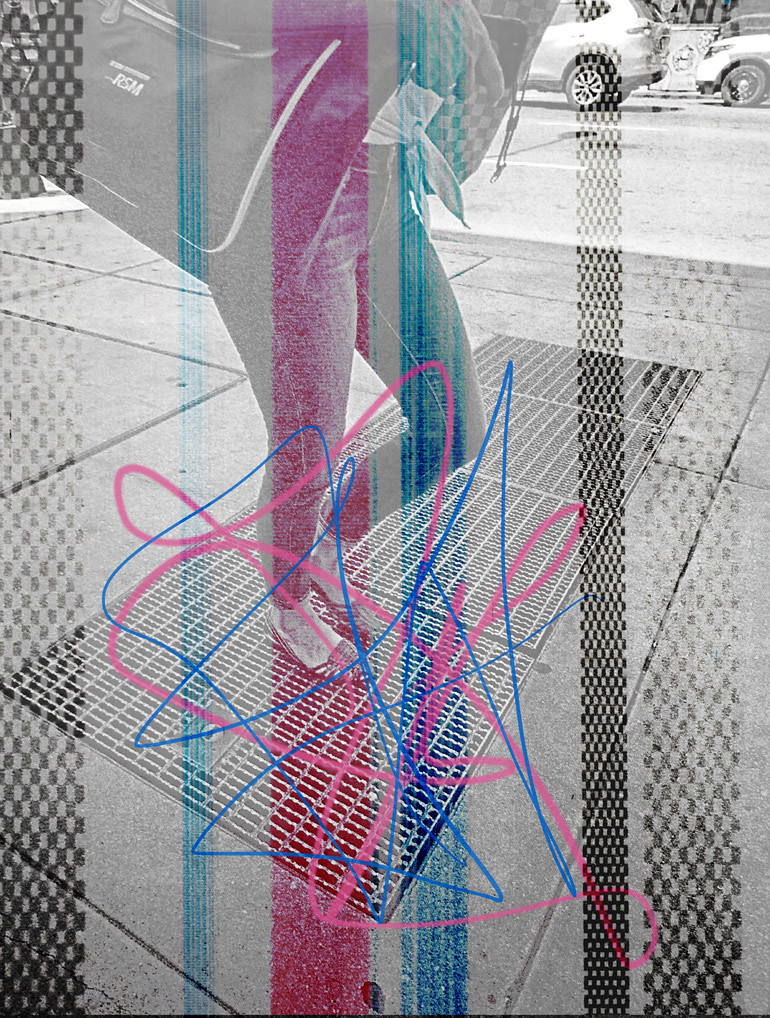 untitled by Tyler Hewitt
App used: Snapseed, Procreate.
Backstory: Last June, I took a group of my Photography students on a field trip to downtown Chicago to shoot for a photo essay assignment. I always bring a camera and shoot my own photo essay on these trips, usually with a theme I determine once I’m there. My theme for this shoot was doors and grates; this is one of the unused photos I shot with that theme. I printed it on a cheap office laser printer, intending to use it in a hand made collage, but instead photographed the print with my iPad and made a digital collage. The vertical stripes of color are a printer ink flow test print I also shot with my iPad, and I added the scribbles on top. One of those pieces where I really didn’t have an idea going in, I just played with it until I liked it.

Fog by David DeNagel
App used: I used an iPhone 7 Plus. Edited in Darkroom and Distressed FX.
Backstory: This image was taken, 3 years ago, on a morning walk, on Christmas Day. There was a heavy fog. The location was a local park, which, due to the holiday ,was practically deserted.
Far ahead of me, I saw a couple, their outline and colors, dimly delineated in the deep mist. The lake to the right, the solitary bench and the position of the couple gave the composition balance. The strong curve of the path heightened the sense of distance.
I used an iPhone 7 Plus. Since, the original image appeared basically unedited, I reprocessed it in Darkroom. I mostly used the Hue,Saturation and Luminance sliders to target my adjustments. I felt that adding some textures would enhance the lonely “atmosphere”, so I gave the image additional processing in Distressed FX. 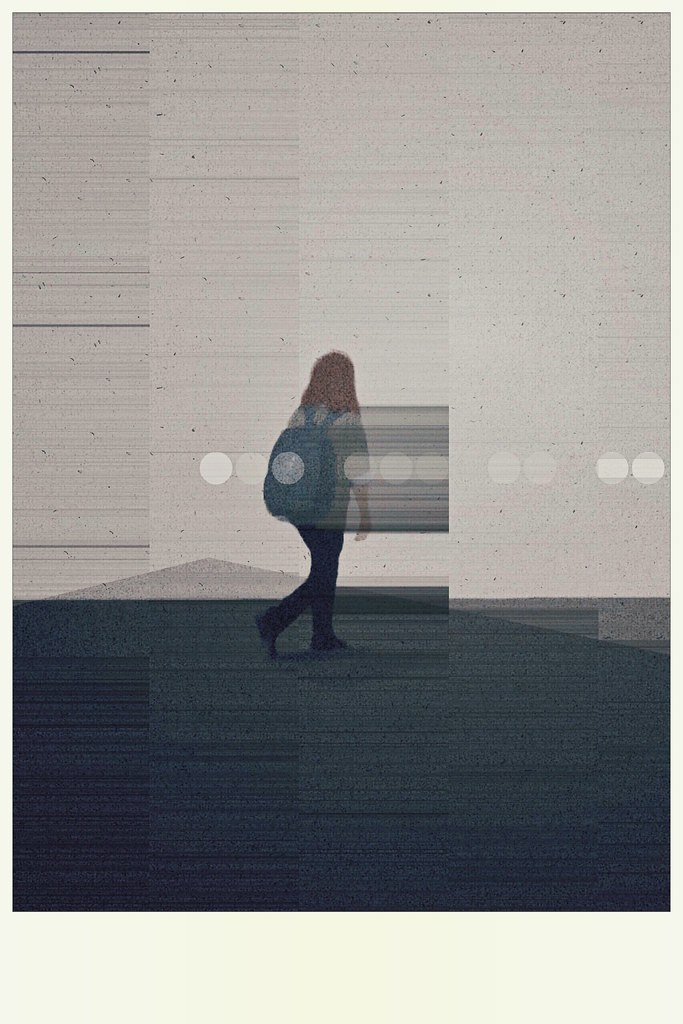