This week’s Apps Uncovered presents images that reflect the two notions of “Darkness” and “Light,” both in the literal and metaphorical senses. Andy Alexandre’s image “Extraction” sets the stage for this week’s selection.

Backstory: For this one idea was to play with move about arm, hands and head without to add too much effect. So it was to create a fantasy mood with this pose.

Backstory: The base image is a blending of a slow shutter self-portrait with a shot of a centipede(found it flattened in a parking lot). I believe the blending mode was “exclusion”. In Image Blender also, I sized the top image of the man so that a few of the centipede’s legs were visible around the edges.

This top image consists of four photos altogether. One is a blend of the same slow shutter self-portrait with a photo of a cracked and weathered board, and the third is a self-portrait taken with PhotoBooth on my iPad(using the Stretch lens).
I brought the slow shutter portrait into iColorama and then loaded the PhotoBooth image on top of it.

Using one of the masking tools, I removed most of the top image including some areas on what remained of the face. After saving these changes I imported a different bottom layer and erased a section of the top image which created the brown, crescent-shaped area that might be construed as a ‘beard’.

Then in Image Blender I placed this compound image on top of the centipede and sized it as described above.

Backstory: This shot was taken on my back deck with the iPhone 6 native camera using Olloclip’s 10x macro lens. Using Stackables I created a formula adding texture, grit, geometric shape, and slight vignette. I then used Halftone to add the numbers down the middle (I like that particular font), and merged the previous incarnation with Union, lightening the numbers and removing some unwanted blemishes from the Halftone version. Using a saved formula in Mextures, I added additional grit, light leaks, emulsion, fading, grundge, and sharpening. I finally used Phonto for the script with a slightly lowered opacity. The two dividing color tones were just a pure result of the outside backround blur from the macro lens and the heavy editing.

Apps Used: Shot with PureShot and edited with Filterstorm Neue for basic edits, then run through Stackables for the added textures, and then finally back through Filterstorm again for final tweaks.

Backstory: Most of my work tends to have a “darker” aesthetic, and this image is no exception. This one wasn’t overly planned out ahead of time like some of my photos, but I did have a few concepts in mind. The final capture simply happened organically while I was shooting. 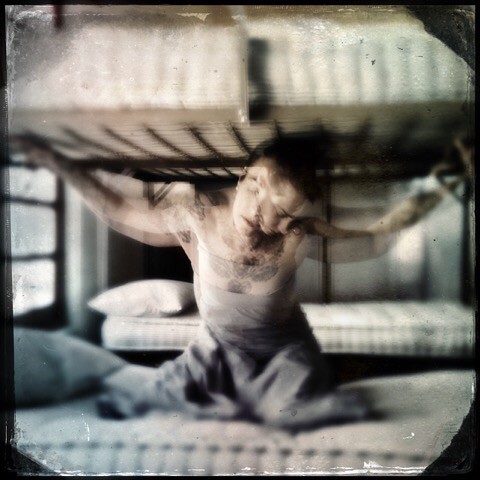 Apps Used: Shot in Hipstamatic as a Multiple Exposure with the Tinto lens and C-plate type film.

Backstory: Like A Bird was taken in a Karen Divine workshop in Santa Fe two years ago. I recently went through my photos from that class and saw this image. This image was shot on location at the Scottish Rites Temple where we were working with models. The top floor had a room filled with lots of empty bunk beds. This model (I regretfully don’t remember her name) was so fluid and comfortable in front of the camera. She took direction well and also had great moves of her own. 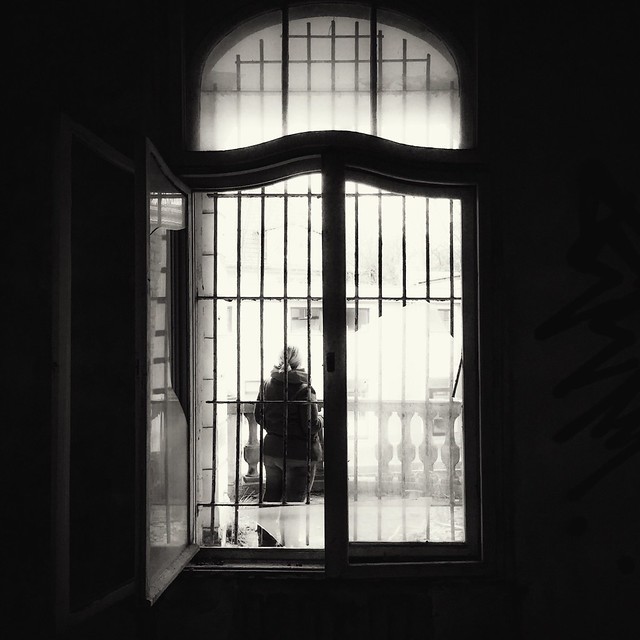 Backstory: It was warm on last Saturday. so I went to the beach with my dog. it was low tide in the spring tide by chance. natural wavy pattern was so beautiful. I wanted to take it clearly, so I shot it from a low angle under backlight.

Backstory: I took this shot at North Beach in Hampton NH last January on an iPhone 6 using the Hipstamatic app with a Doris Len & Uchitel20 film combo. I had just finished walking the beach not having much luck in finding interesting things to shoot. As I was leaving I saw a girl standing on the seawall facing the ocean doing a strange dance. I thought to myself, you don’t see that every day, so I turned around and took one shot of her before I left. Latter I cropped it in Snapseed, then put a beam of light in using the LensLight app. It looked like a natural fit. Just one of those lucky shots.

Apps Used: The only app used in this image was Oggl – John S lens with T. Roosevelt 26 film.

Backstory: This photo was the result of a fun day of vintage clothes shopping with my daughter. “Thrifting” is something we do often together – searching for treasures of the past. We found two 50’s style dresses in her size, one red and one blue, plus a beautiful bridal veil. I used a black cloth backdrop lit with gentle evening sunlight coming through our shades, along with a simple soft-light lamp to highlight the blue in her dress.

I chose the Oggl John S lens with T. Roosevelt 26 film. This combo does something amazing with blue-ish hues. It is black and white, but not completely. Perfect for bringing out the navy blue dress amid a sea of black. The little white dots around her are sprinkles of dried baby’s breath flowers. 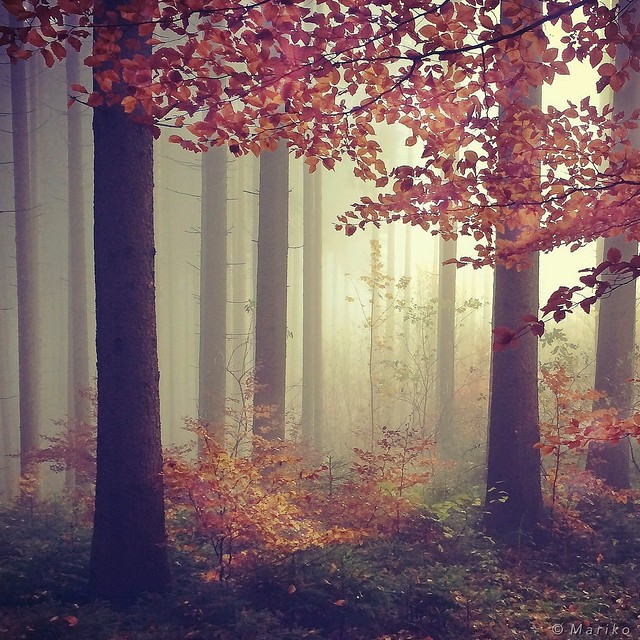 Veil of Leaves by Mariko Klug

Backstory: This time of the year between winter and spring is a very difficult time for nature and landscape photography, in my opinion. The snow melted away, it’s muddy, the nature is awakening but the fresh colours are still missing. So I went through my older photos and found this one. It was taken last November when I went for a walk in a forest on a foggy day. I didn’t like this photo initially, but after a major crop it suddenly became interesting. I decided to give it a try and that’s what came out. 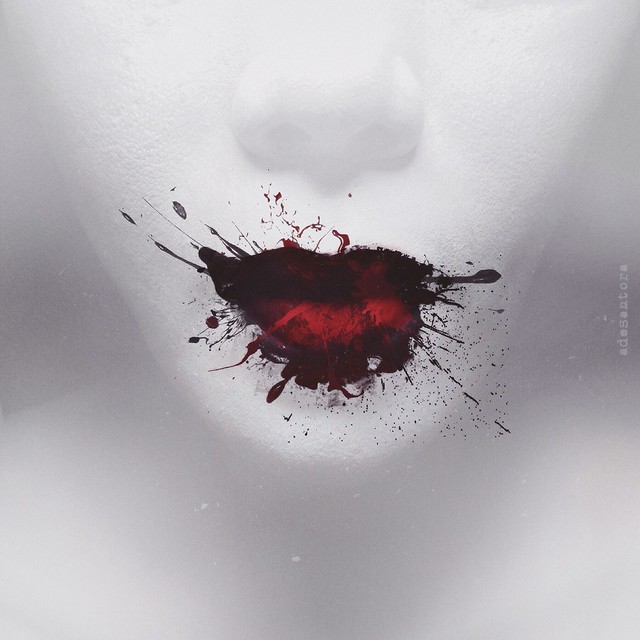 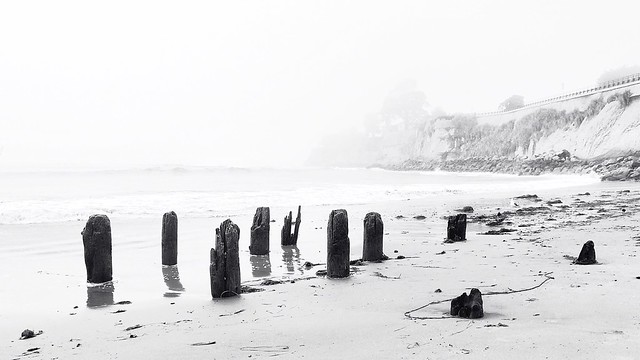 Backstory: I love taking pictures in the fog. Driving into Santa Cruz one morning, I saw the fog had rolled in on Monterey Bay, so I detoured to the Capitola wharf, one of my favorite spots. On the beach there, I found the sand level had dropped, exposing the stumps of many old pilings I’d never seen before, including this group away from the wharf itself. I shot the original in color with vividHDR, hoping to capture the contrast, but I was already pretty sure it was going to end up in black & white. I used one of the B&W Film effects in ACDSee for the conversion, played with the adjustments to push it more toward high key, and made some final tweaks in Photoshop Touch and Instaflash Pro.

She Wondered Why by Bobbi McMurry

Backstory: This image began as a TinyPlanet image that Steph LP had created. We challenged members of the APPart community to explore the image further using whatever apps they wanted. This was my solution which I like very much.