The first image by Mutablend (Mapping Your Dreams) artfully conveys with a self-portrait the theme of opposites in constant tension through both the overall integration of disparate elements and also in a series of details (airplane soaring above the heading, birds dropping from the coat, and a mass of buildings making up the body). The delightful flowing lines implied by the outlines of the buildings and the simplicity of the concept keep the scene from seeming hopeless or downbeat. The tension between reality and dream seem to be a positive and natural part of life.

In an interesting (quite serendipitous) turn this week, we lead off with three selfies – each vastly different from the last. 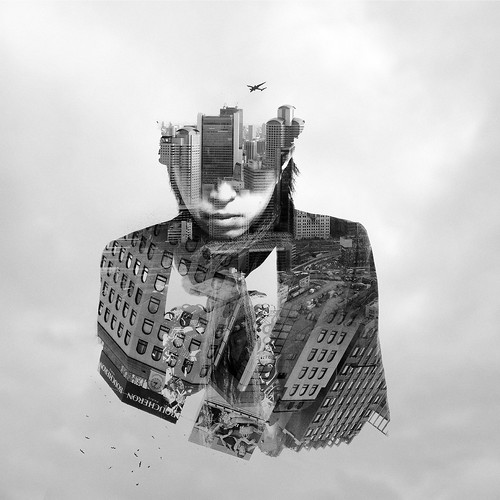 Mapping Your Dreams by Mutablend

Backstory: The image is multiple exposure self-portrait. Basically, the thinking at the root of my works is “the relation between contraries always exist together”… creation and destruction, artificial and natural ones, the surrounding environment and me, dream and reality, and so on. That image is also true. 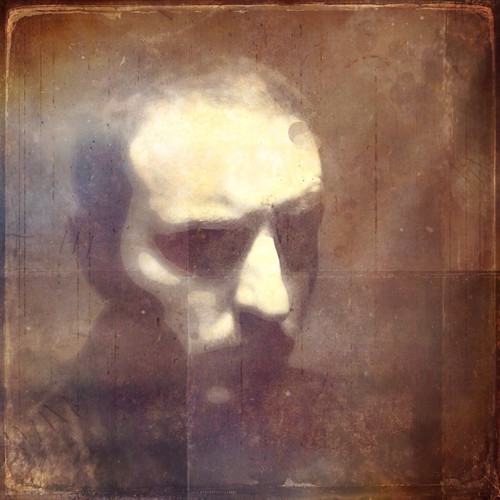 Apps used: The image was shot with Hipstamatic using the Tinto lens and D-Type film. The first edit was with the silk brush in Repix to remove some detail and add contrast. The drips brush was also used to add a bit of texture in the background. This was blended with the original image in Superimpose to bring some detail back. Lighting was added with LensLight, then textures were added with DistressedFX, Lumié and Scratchcam (all blended again and again in Superimpose).

Backstory: I’ve never liked taking photos of myself but I’m growing a moustache for charity at the moment and had to take a picture to prove that it’s actually there. The original image was useless as far as moustache proof goes, but the shadows and highlights on my face created the look of a mask which is something that has always appealed to me. I figure if I’m going to post a selfie online, it might as well be of this mask and not me.

The Ecstasy of the Good Abbot, Brother Andre by Damian De Souza

Apps and Creative Commons image used: I searched out and found a photo of a cathedral interior on the Flickr commons. After photographing it on my iPad with my iPhone, I opened the two images in Image Blender (after putting the cathedral photo through PhotoCopier to give it the same colouring as the “monk”). I erased the wall that was originally behind me in the self-portraits and reduced the opacity of the cathedral enough to give it a light, ethereal look. The image of the “monk” had previously been processed in ShockMyPic.

Backstory: I never begin with a preconceived idea for an image; I like to play and experiment with them and see what appears and then develop it.

Last winter while sitting in a doctor’s waiting room I took a number of slow shutter photos of myself and subsequently ran them through ClonErase. This gave me a single-bodied character with three partial heads. Even though my jacket was blue and my scarf burgundy, when I filtered it through PhotoCopier they took on a uniform brown colour which made them less distinguishable as discrete items and reminded me of a monk’s cowl. Combined with the positioning of the heads, I now felt that I was looking at a monk in mystical and rapturous communion with his lord. 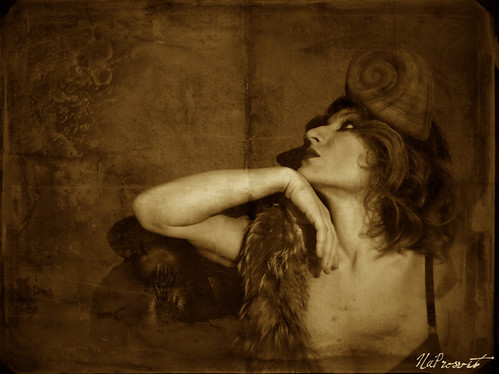 A silent conversation with myself. “Stop Whispering” series by Natali Prosvetova

Backstory: Since I didn’t set a formal date for the my shoot, as a result I could not foresee some things, such as a low light. It seems I had yet another reason now to use the Slow shutter app.

A huge bonus of shooting via Slow shutter is that it really allows you to shoot in very low light. On the other hand, any kind of camera shake or slight movement will blur your shot. So, if you want to guarantee your success, you should use your tripod! 😉 BUT, experimenting with intentional camera movement using slow shutter is another great creative way to turn your pics into lovely pieces of art, since motion blur can be very artistic.

It was my very first shooting with this model and I was unsure about the features of the app. So, I allowed myself to experiment – to just “play” – which helped to create the right mood and also helped the model. I have to say that I was more than pleased with the result.=)

Some additional images captured in the same way are also included in the rest of my “Stop Whispering” series. This series – still unfinished – can be seen here: http://www.iphoneart.com/users/2044/series/4959 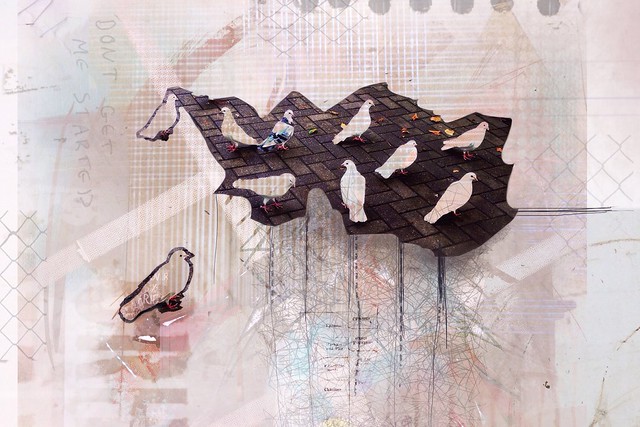 The Outsider by NIcki Fitz-Gerald

Apps used: Shot on an iPhone 5 with ProCamera. Edited on an iPad using Leonardo, Photoshop Touch and ArtRage.

Backstory: I spotted this group of white pigeons/doves as I approached my office building. There must have been about thirty or so of them and their unusual white shapes against the dark ground really grabbed my attention, the sort of moment any obsessive shape-seeking photographer can’t possibly ignore. I took shots low on the ground as well as this shot from above and I loved the way they all seemed to be paying attention. To create this image, I first began building a light coloured texture with various elements I collected in my camera roll, blending them in Leonardo. I then placed the birds in a new layer and began to work intuitively, erasing the ground isolating one bird and using the magic wand tool to quickly erase parts of the birds to let the lovely texture show through. It was about this time that I began to think of the title “The Outsider” relating to the pigeon outside the group and this piece is largely about feelings of isolation and rejection. 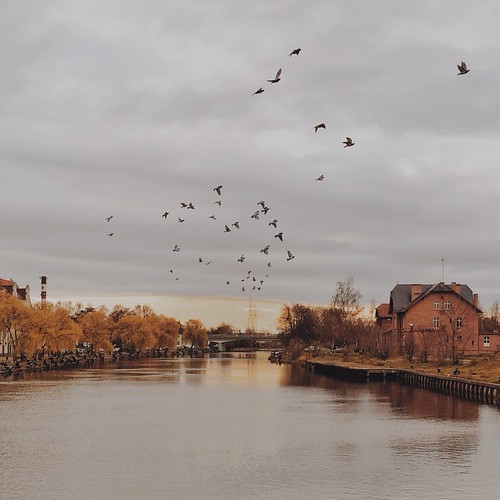 By the river by Adam Oczkoś

Backstory: This picture was taken by the river in my hometown Elbląg (north Poland). Fishing competitions were taking place that day. I was passing by and saw the incoming birds, quickly took out my iPhone and shot a photo. This is what I like in iPhoneography – the speed and the fact that I always have a camera with me. 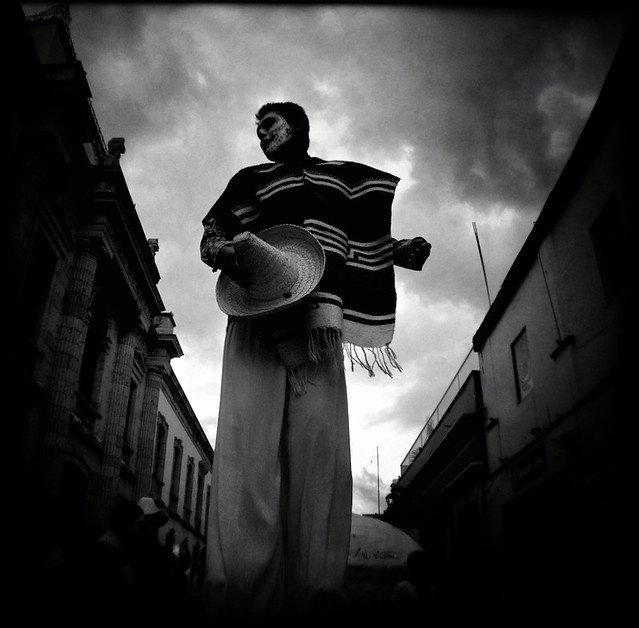 Apps used: I shot it with Hipstamatic ( John S. Lens/BlackKeys SuperGrain film ) and did some subtle darkroom work in Snapseed, dodging his face and vignetting the bottom of the frame to cover up certain visual distractions ( mainly other people ).

Backstory: About ten years ago I serendipitously stumbled upon the work of Magnum photographer David Alan Harvey through his epic book “Divided Soul”. Besides having a profound influence on me as a young, inexperienced photographer, it also planted in me seeds of curiosity and wanderlust — a desire to explore some of these exotic lands in which he’d shot, Oaxaca being the most alluring of all. A place I dreamt of getting lost in, camera in hand; a place that seemed like “real” mexico, not just some fancy tourist resort by the sea.
Fast forward ten years later and that dream was finally realized. However, I never would’ve imagined that I’d be there with DAH himself, through one of his Oaxaca Day-of-the Dead workshops. An amazing experience I won’t be forgetting anytime soon.

This was taken during the Day-of-the-Dead festivities in Oaxaca Mexico while I was participating in a David Alan Harvey Photography workshop. The young man here was on stilts in the middle of the street, getting a crowd of costumed teenagers hyped up during one of the many street festivals ( camparsas ) in town. Fortunately it was a gray, rainy day which helped to create a dark, dramatic mood. 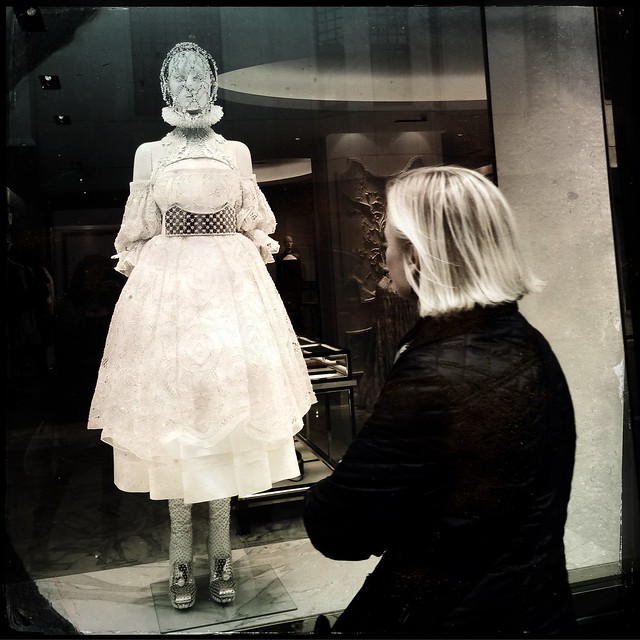 What is she thinking? by Anne-Martine Parent

Backstory: This photo was taken in front of Alexander McQueen on Old Bond Street in London. The spectacular dress caught my eyes (I admit I stared at it for a moment, it is a truly amazing dress – although I would have prefer it in black for myself), and I noticed that it also caught the eyes of everyone passing by. So I decided to take a few shots. On this particular one, I like how the woman is looking at the dress attentively, wondering maybe when and where she could wear it – would it be a little overdressed for the family dinner on Sunday?

I like when, in a photo, there are humans and mannequins, and I like it even more if there is some kind of “interaction” between them. That is why I chose the title “What is she thinking?”; I wanted to create a pseudo-dialog between the woman and the mannequin, as if it was the mannequin who was asking it about that woman staring at her. 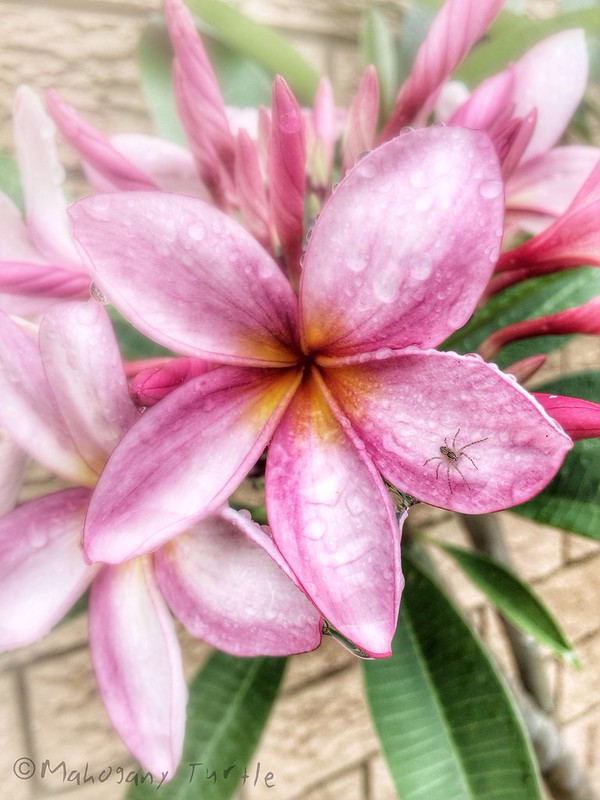 After the rains by Mel Harrison

Apps used: I used the native camera on my iPhone 5s and processed the image in Snapseed using the new HDR setting and Centre Focus setting with the foggy preset.

Backstory: This image was captured in my front garden. Australia has been having a very dry spring and this was just after the first rain that broke the dry spell.

I was heading out the door and spotted the tiny spider on the edge of the frangipani flower.

Backstory: I was in the hospital for a hip replacement and this was the view from my bed. I took the shot with my iphone and processed it on my ipad. First put it through Miracam, my favorite app for creating a specific atmosphere. Then I layered up the five most interesting versions in Leonardo, using different blend modes until i got the effect i wanted. Sent the flattened image to Blender, combining it with a textured shot of my crumpled white sheets to create the grey folds of sky in the windows. Finally applied a custom frame in Leonardo.

This image was created on the day i left. Having my iphone and ipad with me in the hospital was the best thing i could do for a speedy recovery :-)) 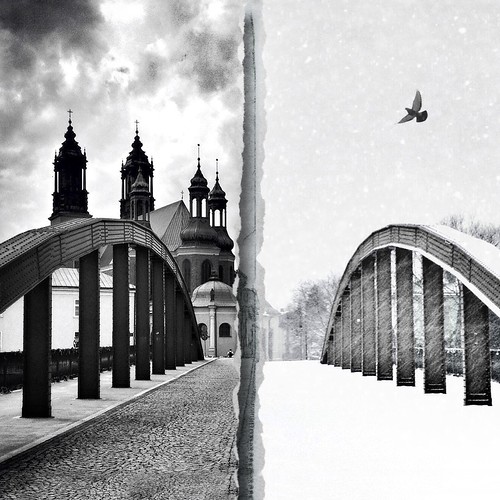 Backstory: This photo was taken in Poznań, Poland. It shows Bishop Jordan Bridge and a street leading to the Archcathedral Basilica of St. Peter and St. Paul. The winter part was taken in February, the summer part in June. I merged them together with a help of two great apps: Image Blender and Ripped from Reality.

Backstory: I took this shot while on a ‘real camera’ -shoot for the food magazine i work for. It was a great shoot and i also wanted the colleague’s back at the office to know what it was like. So while walking back through the muddy fields with several hares shot, I took this shot with my phone and edited it with snapseed.

I love the exaggerated dark sky, wich fits the rainy mood. It was taken in the north of the Netherlands, where the landscape is very flat. The straight lines of the plowed field were a no-brainer. Together with the straight horizon and the two subjects in the middle i believe is quite powerful.

The sounds of thoughts colliding by Karla Da Silva