This week’s lead artwork, an untitled piece by Dominique Torrent, captures a mysterious moment of childhood, one that invites any number of possible interpretations. Captured from the child’s viewpoint, it suggests discovery, the first signs of independence, and a hint of magic. 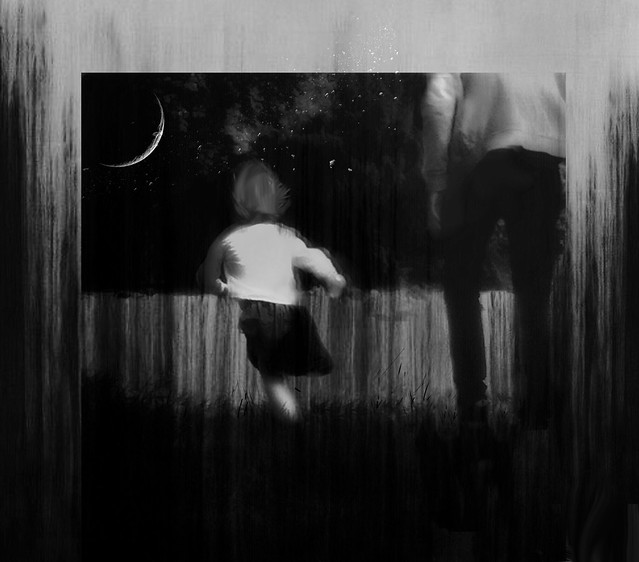 Apps used and backstory: This image was taken in a park in Paris. I was lying on the grass when I saw this girl and his father playing . I cropped the shot and turned it into black/white and added a very wide white frame with Snapseed. This frame gave another dimension to the image, suddenly the father went out of the image. At this moment I found the image much more interesting. I added the grass on both sides with Blender and painted in black at the bottom of the frame with Artstudio. At the end, on a whim, I added the moon and the stars with AllienSky. Et voila!

Apps used: I took the photo using the native Camera app on the iPhone6s mobile camera. I processed it using the app “Dramatic Black and White” to give the scene a bit of drama.

Backstory: This shot was taken from the observation platform atop the Empire State Building in New York City. I was taking some photos when I noticed some pigeons at the edge. I knew immediately that I wanted a shot with the birds in the foreground and the impressive Manhattan skyline as a backdrop. I would have loved to get a shot of the bird in flight but was not so lucky. I created a dark, brooding atmosphere in this image to convey a sense of scale and highlight the contrast between the natural grace of the birds and the concrete power of the skyscrapers.

The elephant in the room by lorenka campos

Backstory: This piece expresses my feelings of emotional disconnect and aloneness in the world. People don’t know how to respond, so they ignore it.

Apps used and backstory: Self Portrait shot through glass using the native iPhone 6+ camera and edited using Mextures and Snapseed.

the couple by David DeNagel

Apps used: The image was shot on an iPhone 6s plus. I used only Hipstamatic and one of my favorite combos, John S lens & Uchitel 20 film. No other post processing.

Backstory: I had wanted to shoot in a different yet familiar locale, so I drove to St.Charles,MO,a large & very diverse city along the Missouri River.

It was going on evening. I saw an elderly couple making their way up a mostly vacant street. The street was steep. Ahead,the sun was going down and glowed on the horizon. I imagined them heading straight for the dying light. They held on to each others hand and moved along slowly. The visible tenderness of this shuffling couple is what moved me the most. The image somewhat brought to mind the passage in Ecclesiastes, Chapter 4:9-10 “Two are better than one…for if they fall,the one will lift up his fellow: but woe to him that is alone when he falleth; for he hath not another to help him up”. This couple certainly would have tried to aid each other. 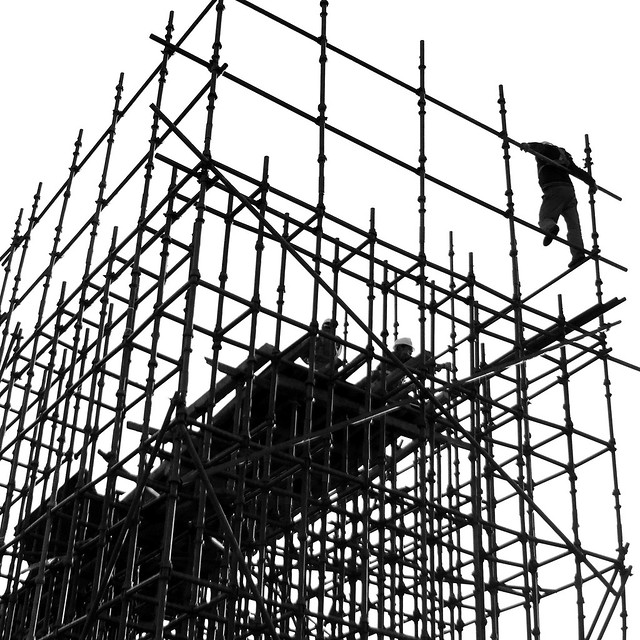 Homage to the hard-working ones … and those who are not afraid of height! by Paul Yan

Backstory: This image is my way of paying respect and gratitude to all public construction workers all over the world who often encounter perilous conditions in their work, way up high or deep down below.

These workers on a scaffold were building a new highway that connects the city of Beijing to its ever-expanding eastern suburbia. As I was about 30 or 40 meters away outside a fence, I had to use my Manfrotto 1.5X telephoto add-on lens to fill up the frame. Besides inward barrel distortion, both the Manfrotto 1.5X and 3X lenses produce severe chromatic abberation that all outlines and borders in the image are discounted by fuzziness. However, I’m glad they can be of help when one can’t get any further to the scene.

Editing was done first in the SKRWT app to correct the distortion. Snapseed was then used to convert the image to black and white, and to crop to square aspect ratio as the sky was pretty bland and not needed.

And Our Faces, My Heart, Brief As Photos [Alberto (1961-2016) and Franca, Belmonte Castillo January 2016 Rest in peace my dear friend] by Lumilyon

App used: The photograph was shot in LENKA, no further editing.

Backstory: In January, I travelled to Italy to visit Alberto: a dear friend and artist who was, amongst many things, a uniquely talented painter. We were intending to collaborate on a number of creative projects and spent many hours talking about what we might do and how we’d go about it. His house, situated high in the mountains…is beautiful but was freezing cold. Winters there are tough. One night, our friend Franca popped over and we huddled around a laptop, watching You Tube videos and introducing each other to music that we loved. The room’s only illumination was light from the computer screen.

At the end of February, my friend was diagnosed as having Cancer and just a few weeks later, he had died. The sudden departure of a very special human being has left all who knew him in deep shock. The sharing of photographs is one way that we’re helping each other to come to terms with our loss. 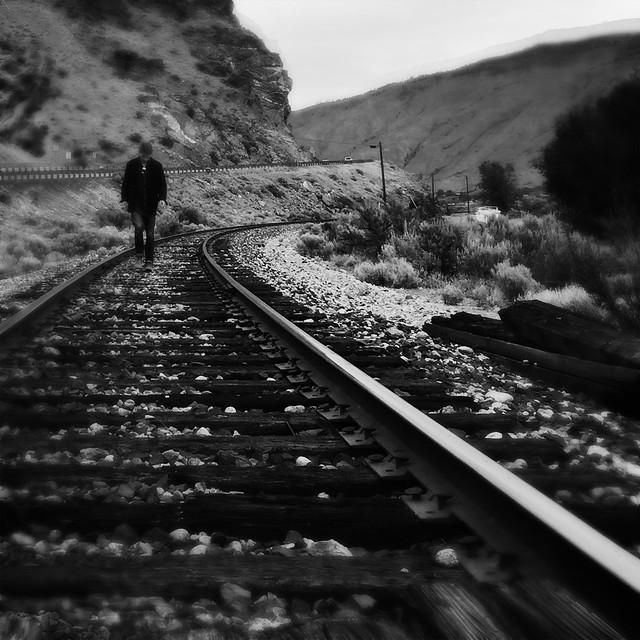 making his own way by Jormain Cady

Apps used and backstory: This image was taken in Oggl (Anne-Marie lens, Queen West film). We drive up for a long weekend in Lake Chelan every year, and because of sports conflicts this is the first time my son has been able to go in the last several years. I stopped on our drive up to take some photos of the river on our way. Walking back to the car my son took a detour on the railroad tracks. He’s heading off to college this fall, and it was a poignant moment for me – my hope is this emotion comes through in the image. 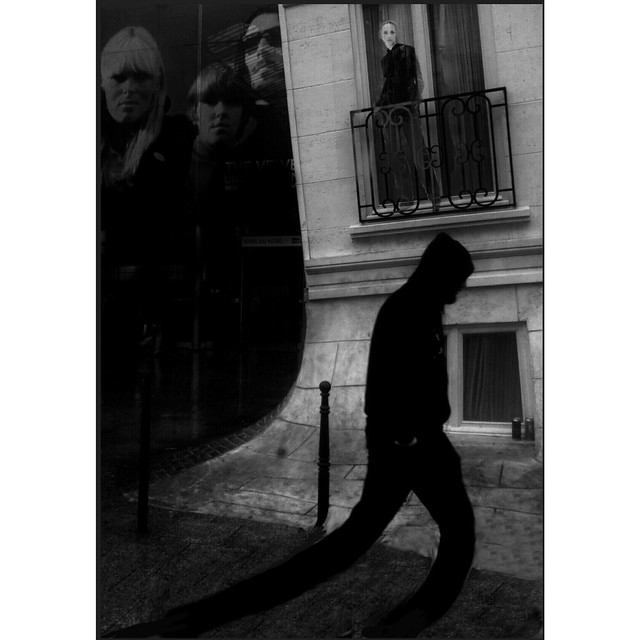 Apps used and backstory: I took this photo when I was at Gare du Nord station in Paris. I saw this false small house, constructed of faux materials. There was a man who just passed in front of it at one moment (the characters on the left are part of an advertising placard). The scene already was quite established, so I simply added a silhouette at the window with Blender and stretched the leg of the passer-by with Effexy/liquify to give the image a surrealist mood, and lastly I cropped and converted the final image into black and white with Snapseed. 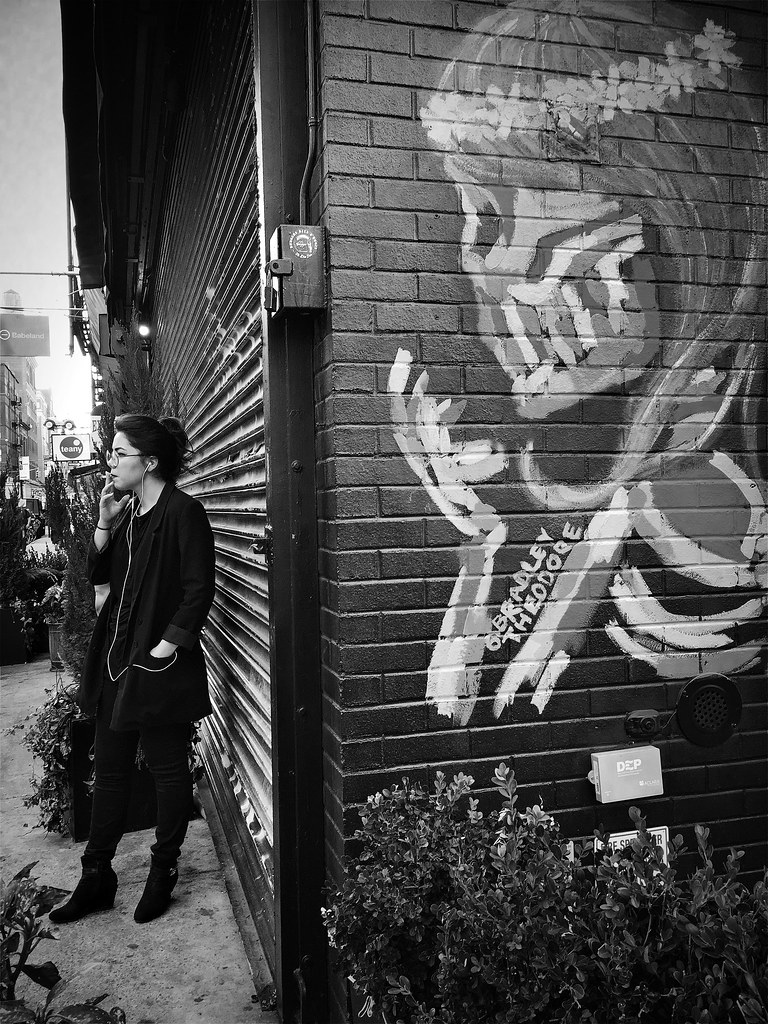 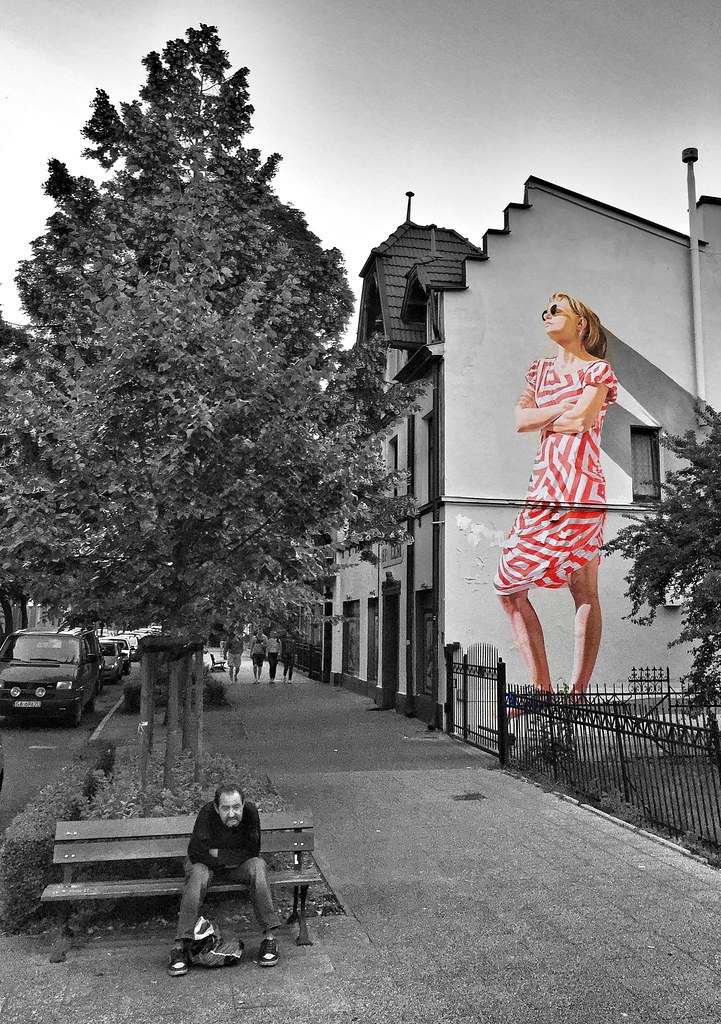 Backstory: In early summer last year I had one of those intensive bike rides that combine taking pictures, exploring places and physical activity of course ! When I was on my way back home from Gdańsk to Gdynia, Poland, I stopped for a while in Sopot, a picturesque spa resort, to take a photo of my favourite mural in the area. I had been thinking of how to frame it but when I got to the exact place, I rearranged my plans totally – that was because of a gloomy-faced man sitting on a bench nearby.

What fascinated me then was rather a contrast of how the glamour girl on the mural and the man appeared. My “street” instinct took over and there I was with an idea of suggesting dreams or visions conceived in the man’s mind or alternative, opposing city realities.

To increase the impact of my concept, I used splash technique to separate the fairy and real worlds, while, at the same time, I made black and white intensively contrastive. 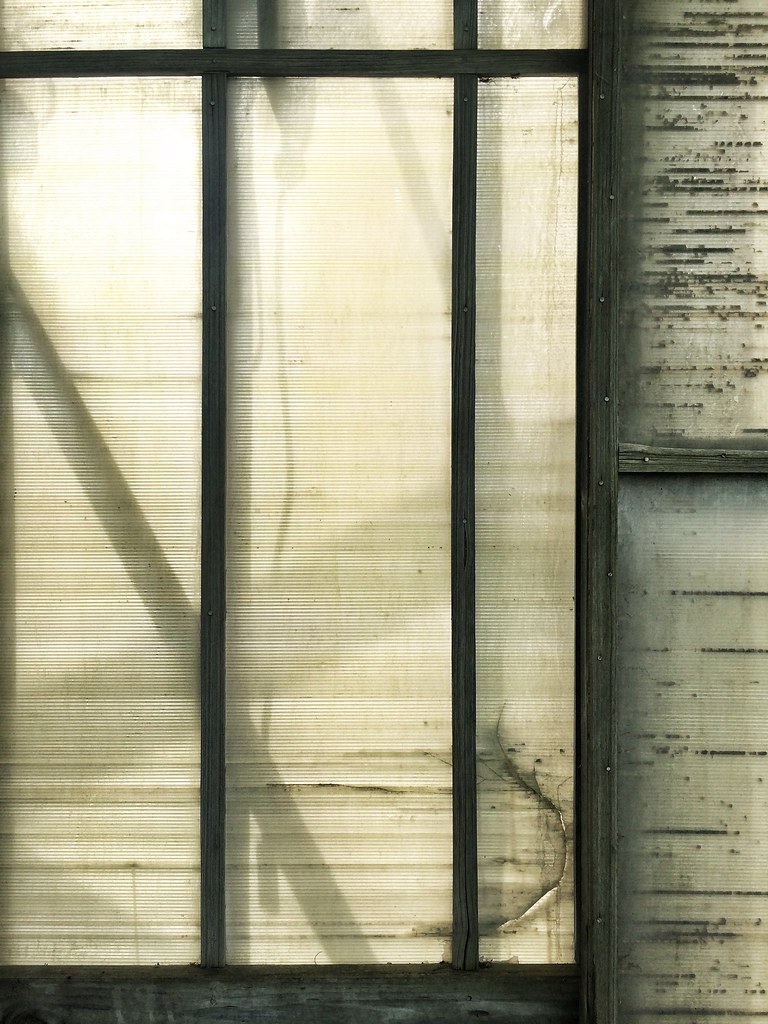 Apps used: This image was taken with an iPhone 5S and I only did some minor tweaking in Snapseed.

Backstory: I was walking the trails of Rutgers Gardens (part of Rutgers University) and stumbled upon this beat-up plastic garden shed. Of course I crawled through a hole in the wall and snapped a bunch of photos. For me, this was an amazing find! 🙂 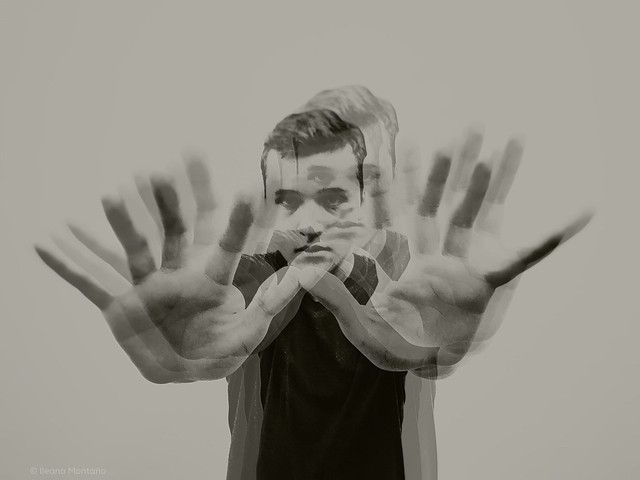 Apps used: This picture was taken with the iPhone 6 native camera and worked with Snapseed and iColorama.

Backstory: This is one of the versions I created to fulfill a request I received for the cover of a Mexican rock punk straight edge band album. The concept is about the youth, in contempt, reaching out for acknowledge and understanding, and at the same time one of the body signals known to stop bullying.

My intention in creating the work in black and white and with that image duplicates out of phase, is to suggest the agitation or turbulence of the subject, and to convey the desolated feelings of youth.