In this combined two-week edition of Apps Uncovered, I built my selection from our Flickr group around a theme I’ve called “Sur(Real).” That is, there are some images that are quite obviously surreal and otherworldly, but there are others that are completely realistic, but are odd enough to seem more than real (hence the prefix meaning “over,” “above” and “in addition”), so therefore (sur)real – in the sense of seeming to amazing in their perspective or look to be real. I’ve sprinkled these realistic images throughout this week’s collection. I hope you enjoy!

This week’s lead artwork, “Good Boy” by Catherine Caddigan, evokes a surreal moment with dog against a strange landscape with a jetliner descending perilously in the sky above. 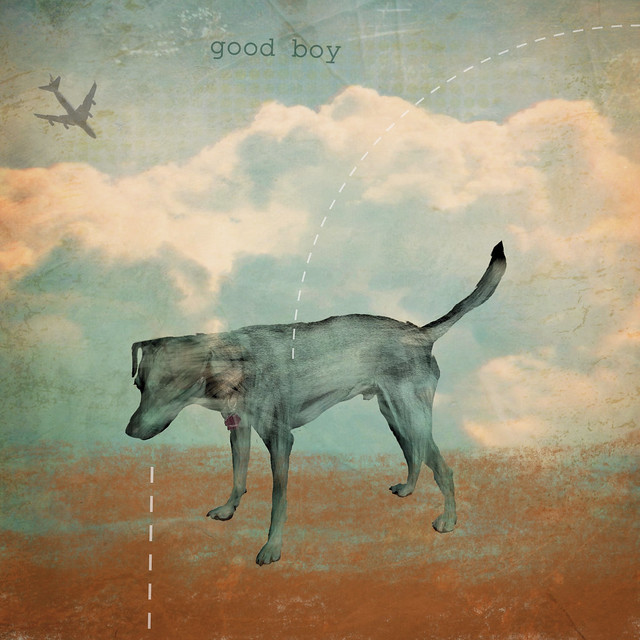 Apps used: Procreate, Hipstamatic, Snapseed, Graphic
Backstory: Working as a graphic designer, I was influenced by the illustrators of early tech marketing, people like Martin O’Niell and Alicia Buelow. It was very much collage art, but was it fine art? I thought it was, and began working this way in Photoshop. Fast forward I still make collage art, only my images are now shot with my iPhone and edited on my iPad. I am drawn to mundane imagery and I spend a lot of time with my dog so he makes a good subject for my work.
All the images used in this piece were shot with my IPhone 8+ native camera and imported into separate layers in Procreate.The cloud background I enhanced in Hipstamatic first. My dog was isolated with an eraser and duplicated and selected as a mask for painting. I painted the ground on it’s own layer. I saved the Procreate piece and imported it into Graphic, where I added graphic elements. I usually make final color adjustments in Snapseed. I love the mundanity of “Good Boy,” while it is simple in composition, for me, it has an iconic feel. 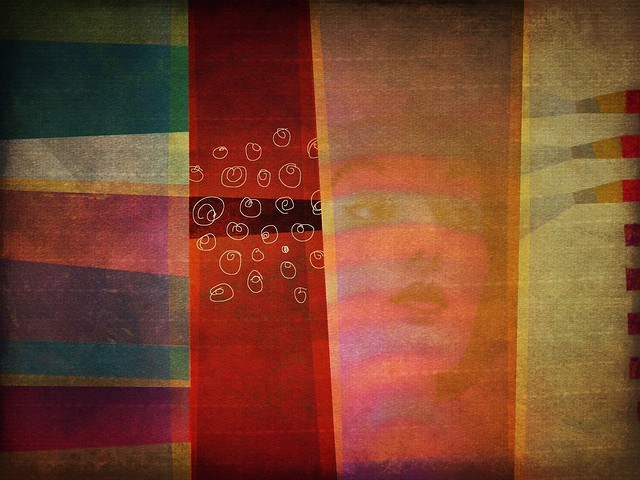 Apps used and backstory: “Unbeknownst” is from a set of images called Quadrille. Each is a figurative dance of the soul, comprised of shards and swaths cut from emotional experience and exploration. Each image in the Quadrille features from four to twelve often overlapping panels arranged in a way that suggests movement through time, and is a nod to the complex dance 18th century dance from which the series draws its name.
“Unbeknownst” explores the facade of human temperament, asking if we can know ever truly know a person through the layers that inexorably shape their life. It is also an expression of faith, knowing that despite the inability in our human condition to know another fully, that we can be known by a Creator who has a count of our every breath and who, even thorough our feeble layers, knows our every thought.
Each image in the series is composed from other images, some created several years ago, so a correct accounting of apps used is impossible. However, the predominant apps used to build the quadrille generally includes Snapseed, iColorama, Stackables, Mextures, Afterlight, MiraCam, and, of course, SuperimposeX. I also employed a series of proprietary image filters created by photographing textures and applying in varying degrees of transparency. 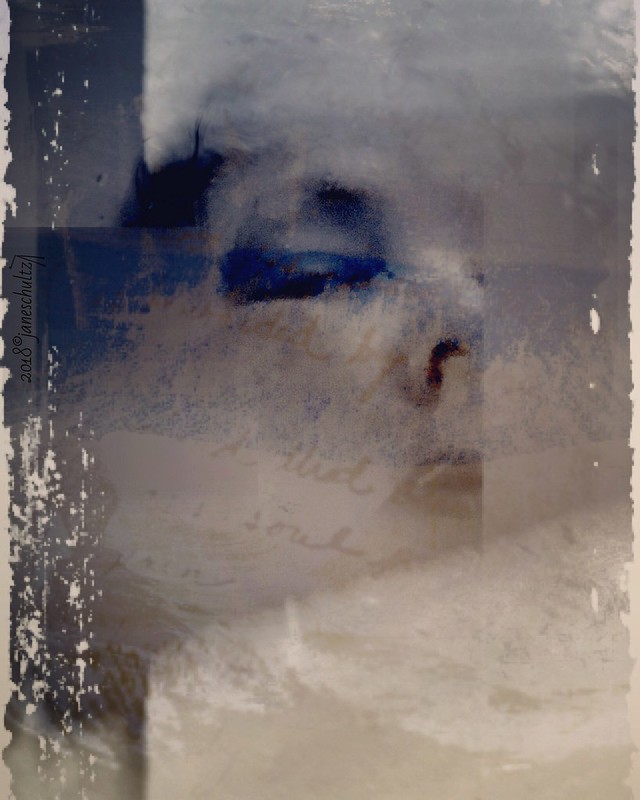 In Your Eyes by before 1st light

Apps used: Hipstamatic, Decim8, iColorama
Backstory: This image was part of a Hipstamatic photoshoot that I keep coming back to for raw material. At the time, the images were part of a political statement. To an extent, the edits from this shoot continue to be…although this one became more of an experimentation with apps that came together. 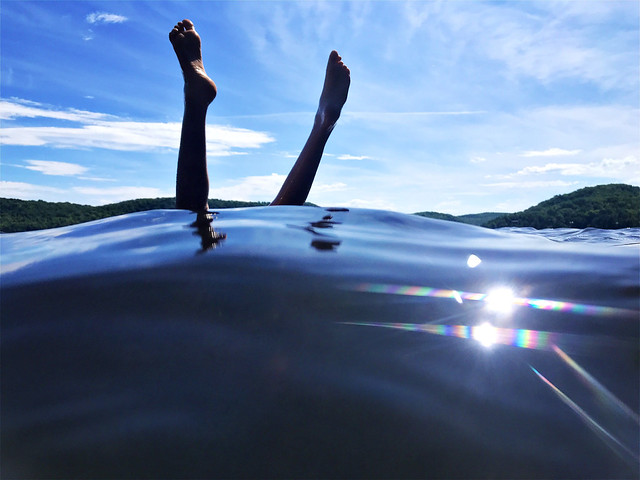 Apps used: Shot on iPhone 7plus with a waterproof case. Edited with Hipstamatic.
Backstory: My daughter, doing a handstand in the lake. 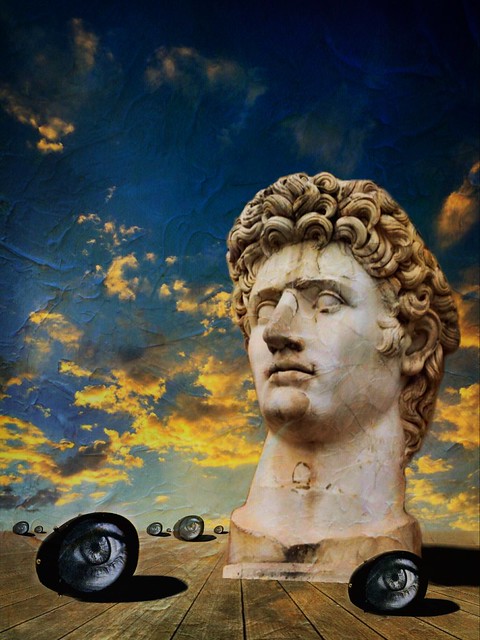 When all Eyes are on You by Chad Rankin / @sirreal

Apps Used and backstory: Juxtaposer, Reflex App, Mextures and Distressed FX. My images are created solely on an iPod Touch with images captured with the same mobile device. By taking separate moments of reality I create Surreal landscapes to illustrate thoughts about the world around us. 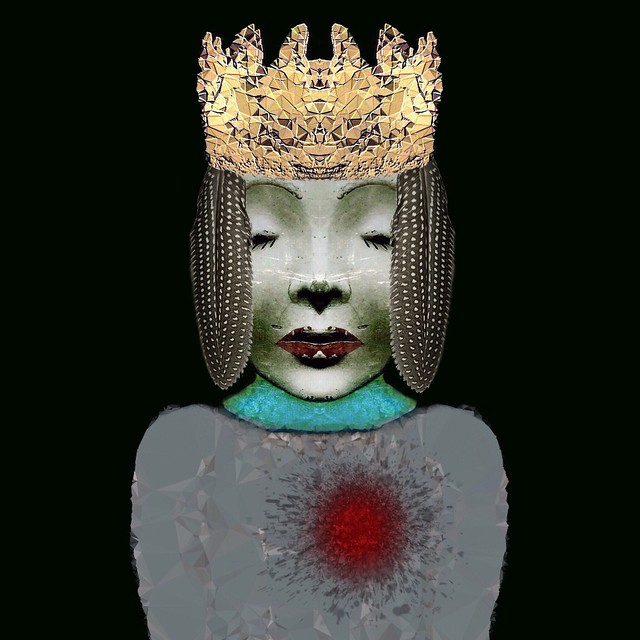 A life sentence by lorenka campos

Apps Used: all images taken with the iPhone 6+ and composed in Superimpose and then edited in Procreate and iColorama. Backstory: This piece is extremely sad and self expressing. It is the story of heart wrenching loss and sadness. The figure is alone, turned to stone, with a giant hole in her heart. 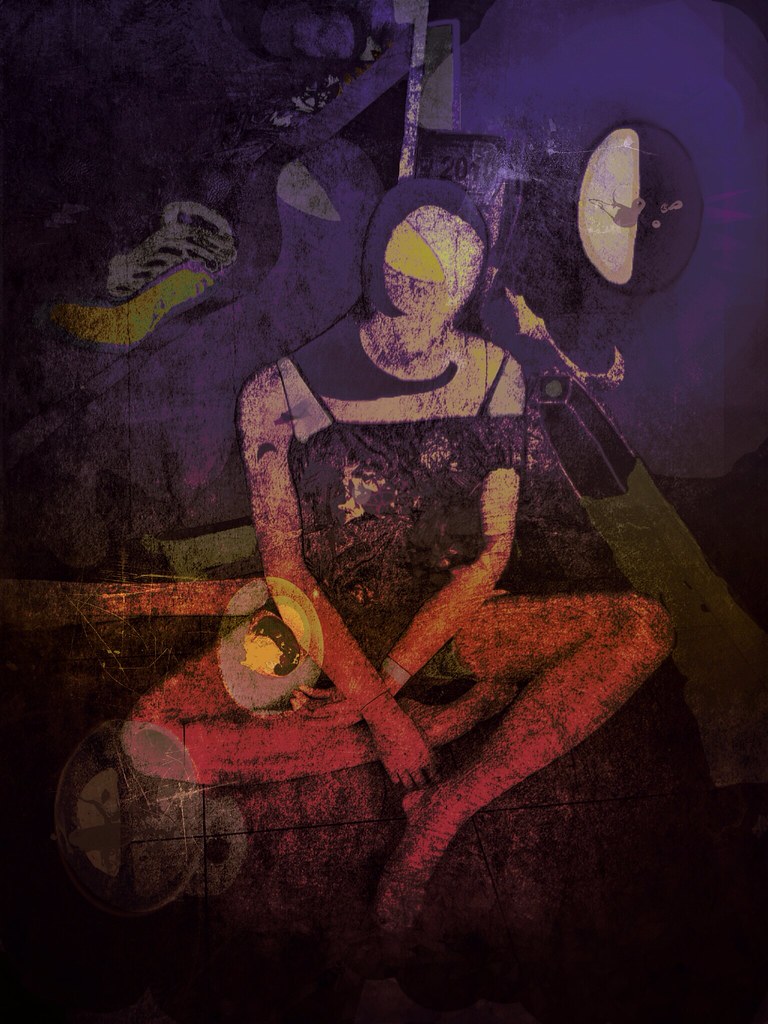 Apps used and backstory: It all started with a display window shot. The dummy’s posture was so suggestive and I felt I could do something with it. Rarely I have a precisely drawn up plan on what I want, very often is the piece itself that take shape on its own, with its own life; but in this case always had the feeling that wanted to transform that dummy in a shaman. Certainly I have preferences and tend toward mystery and magic, but most of the time have no idea of what the result will be.
Love experimenting with textures and colors so I began doing so, adding many layers of textures in Stackables, playing with all the blending modes and saving those that felt could be useful; I always start with my own formulas, saved in the app, and then try to enrich them according to the feeling I’m beginning to get about the piece. When I had a considerable number of images, began to blend each other, masking the parts that wanted to discard or keep. Always do a lot of different blends and when everything begins to take shape I focus on one or two of them, finally choosing only one but going on with the blending. Guess this piece has at least between 15 and 20 layers of textures and at least 10 blends.
Masking different versions of the same image is a lot of fun, because just by that fact you can create new shapes without needing to use a second source image, for instance the presence behind the shaman and both figures’ eyes. To that end I usually work in iColorama S and Image Blender, always both. For precision touches I prefer the second, but iColorama is more versatile due to the fact that you can mask in every tool.
Finished the piece in Snapseed, for vignette and bright, and Repix, a cool app for retouching and adding tiny details. Also love iColorama for details. 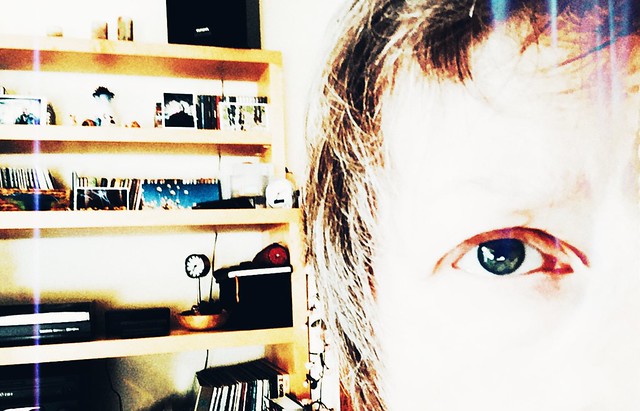 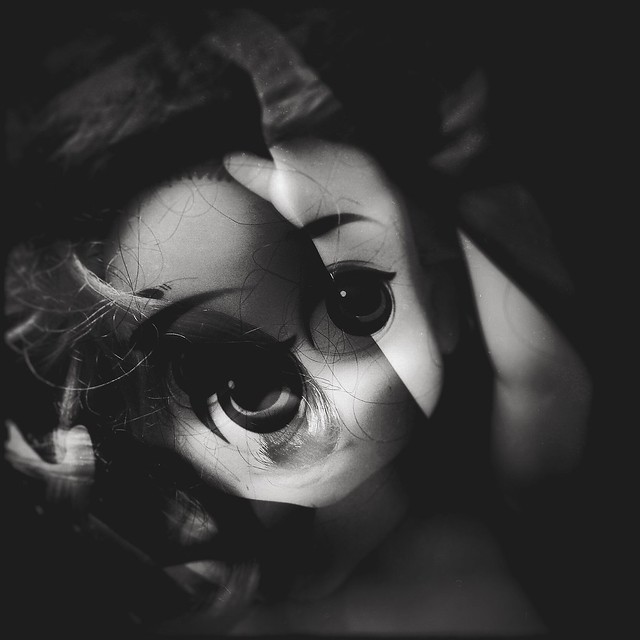 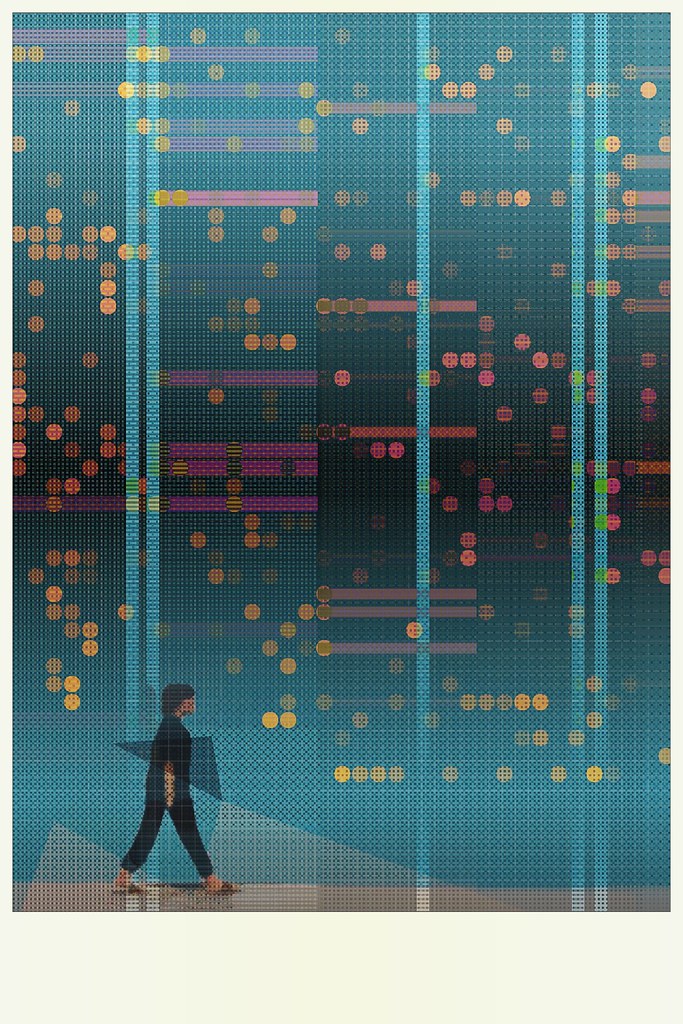 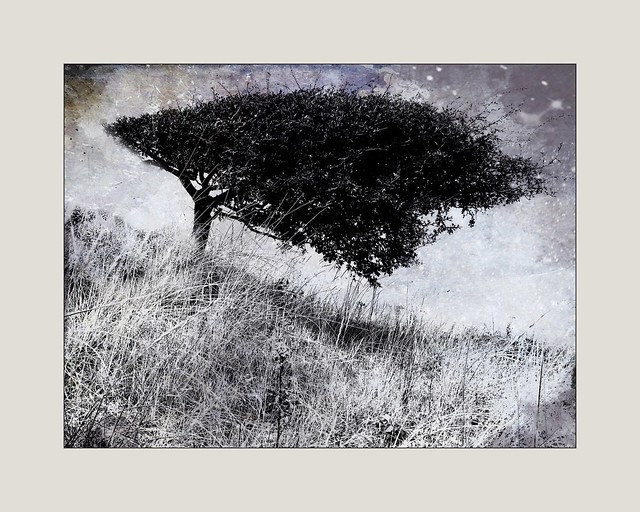 Apps used : slow shutter app, Union, snapseed, retouch, stackables app
Backstory: This photo is a montage that I realized during a seminar of creativity we had to think about how we will learn and train ourselves in 20 years . I visualized this man on another planet. Who knows ? 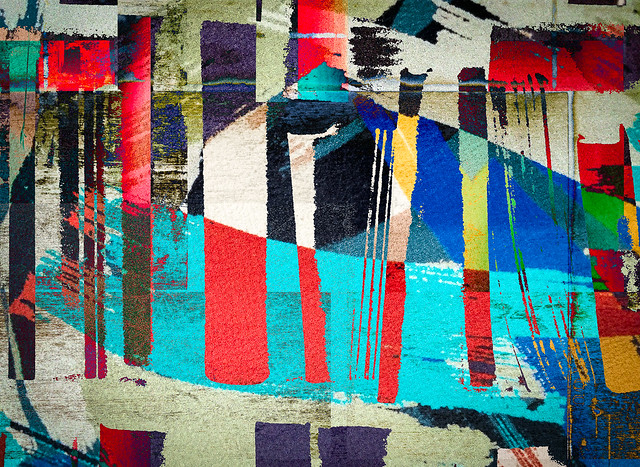 A collage of textures and colours by Milly M. 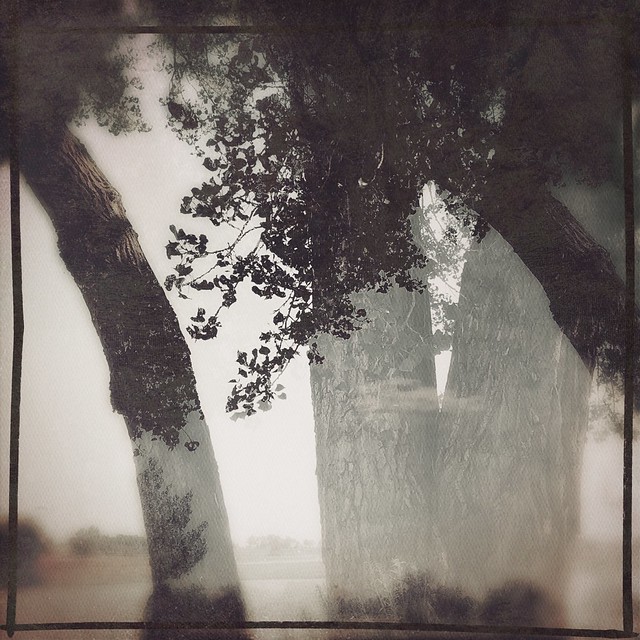 Somehow, Life Goes On by Kate

App used and backstory: This an iPhone image of a collection of my homemade textures but the app I used is Affinity. 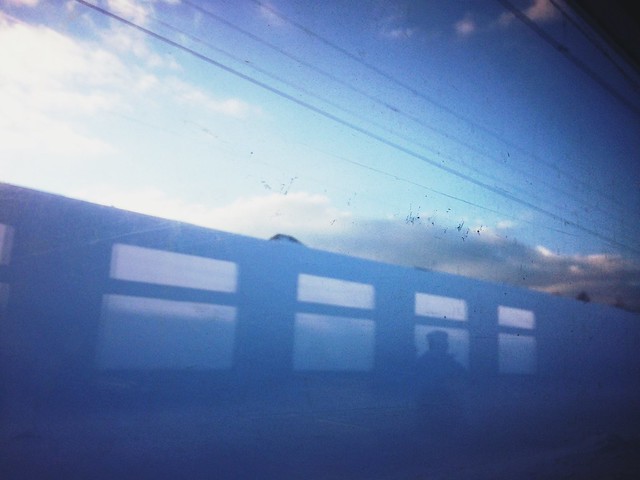