This week’s Apps Uncovered presents a selection of what I found to be the most compelling images for the week, across a wide range of styles and subjects – all celebrating the theme of Mid-Winder Moments.

This week’s lead artwork, newcomer Deena Berton’s image “Life is a journey, not a destination” (Ralph Waldo Emerson)” was captured as her young daughter seemingly labored in the yard to create the world’s largest snowball. What a wonderful euphemism for the Sisyphean task we set before ourselves each morning, beginning the day perhaps with a very small snowball, striving to make that snowball still larger by the end of the day – come Winter, Spring, Summer or Fall. 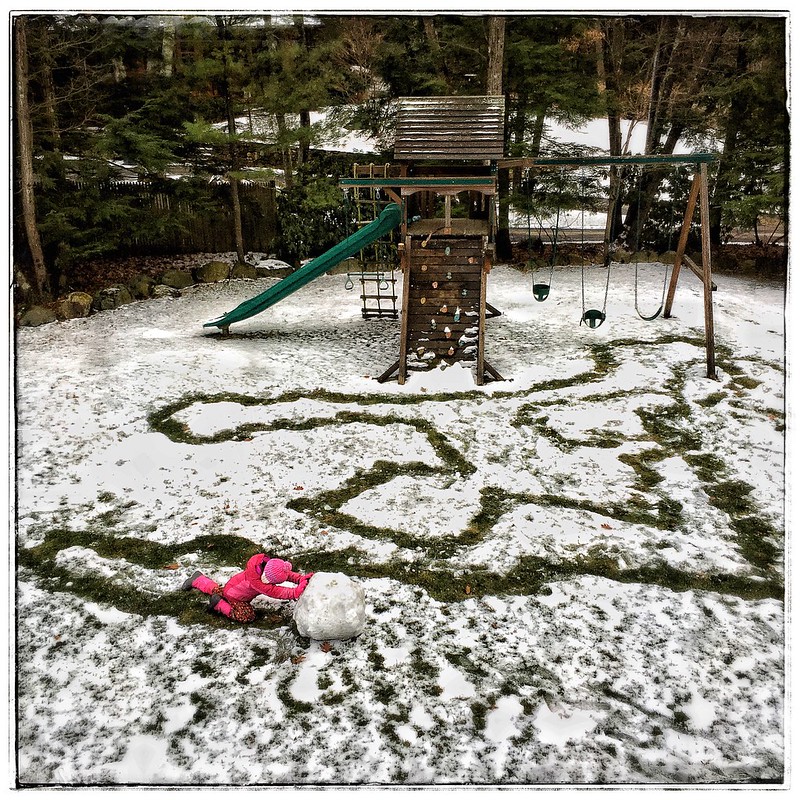 “Life is a journey, not a destination” (Ralph Waldo Emerson)” by Deena Berton

Backstory: I am always trying to document my children’s youth. It seems so fleeting. My daughter was so joyfully just rolling around a big snowball when I saw the pattern because we had so little snow coverage. I grabbed my iPhone and ran to an upstairs window so I could capture her wandering path. She wasn’t worried about a purpose or destination, just having fun. As adults, we forget that skill much of the time and some of us work hard to regain it!

Backstory: i shot the photo with the native camera on my iphone6, then i add the man with the umbrella with the app Juxtaposer, and i convert in BW with the app Noir and Cameramatic, then i use the tilt shift effect with snapseed. 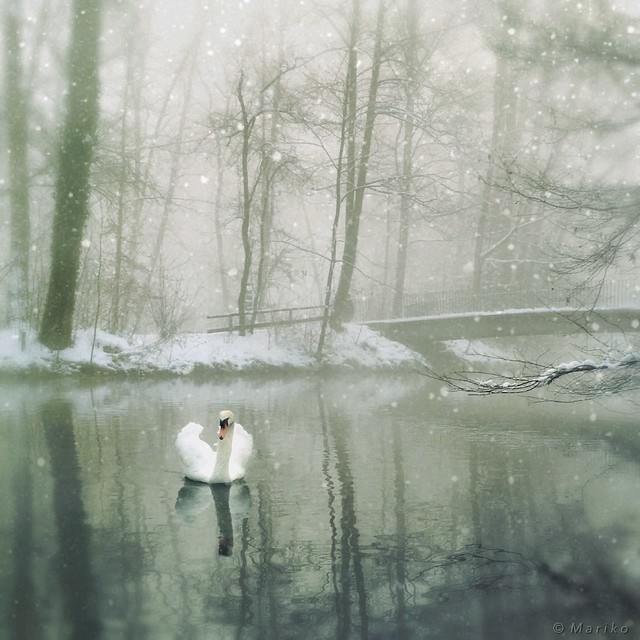 Backstory: The much-awaited winter has finally arrived here in Germany so I went to a nearby park to explore the beauty. It was a snowy and foggy morning, the mood was really enchanting and to top it all a swan passed by and made my picture complete. I was so lucky! 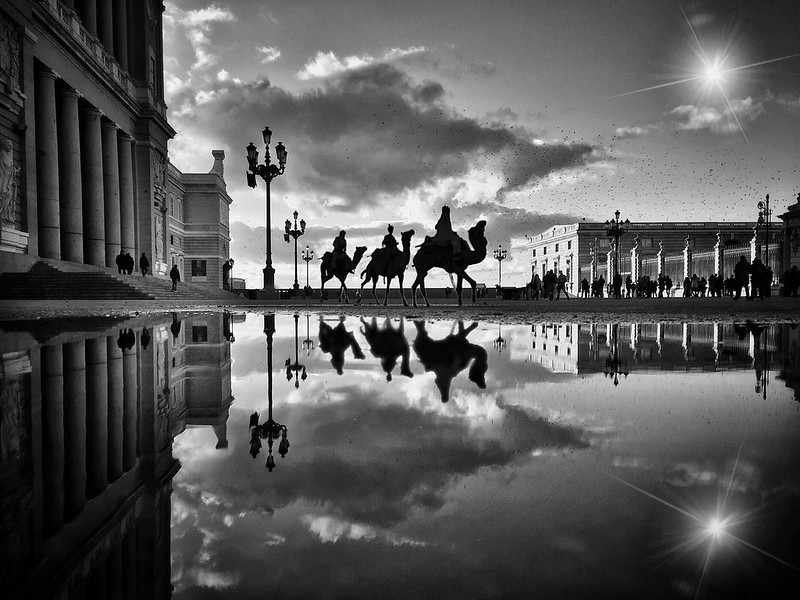 My daily Reflection, today the Three Wise Kings reflected on a puddle… by Luison 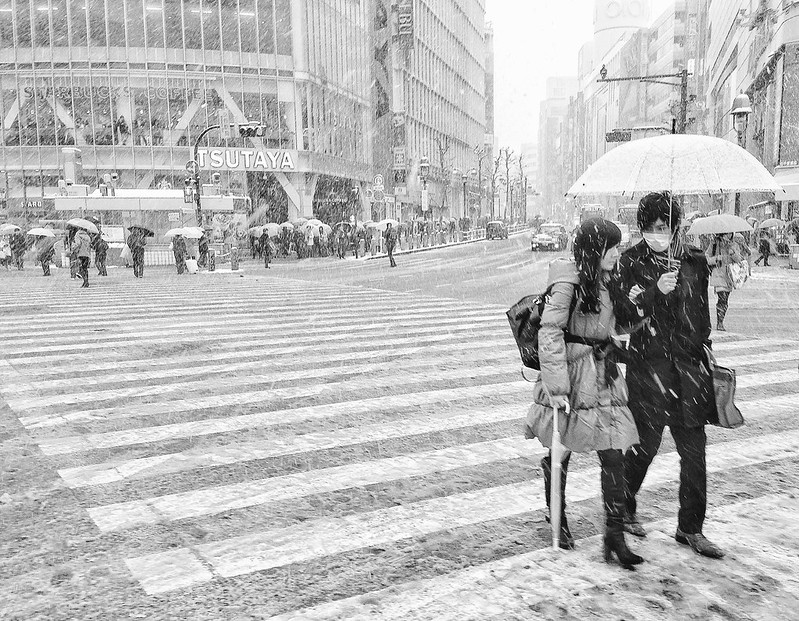 Backstory: This photo was taken a couple of years ago at the famous scramble crossing in Shibuya, Tokyo. Tokyo doesn’t usually get a lot of snow so I was really excited to get out and capture it. There’s something really beautiful about the way snow transforms the look of a city. I spent about 90 mins that day taking pics around the crossing.. I thought my hands were gonna drop off but it was worth it.. I then made a few minor adjustments to the image in Snapseed. 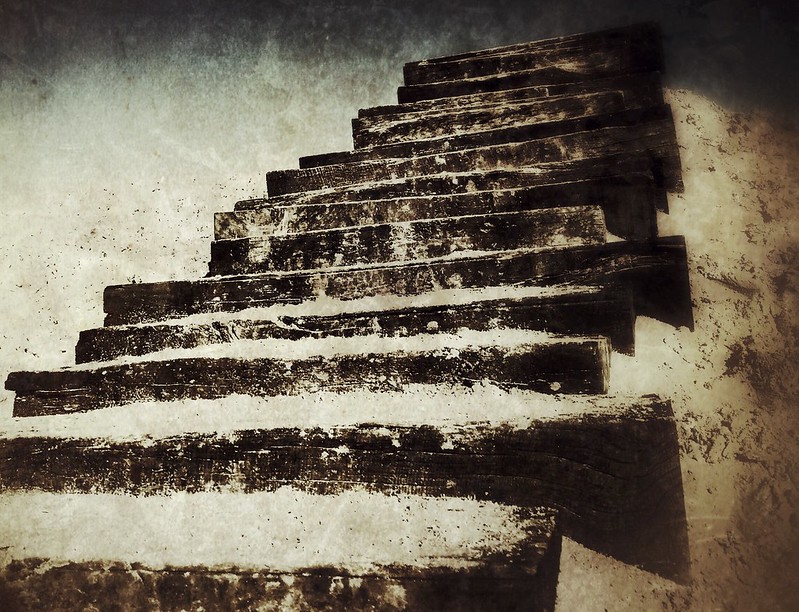 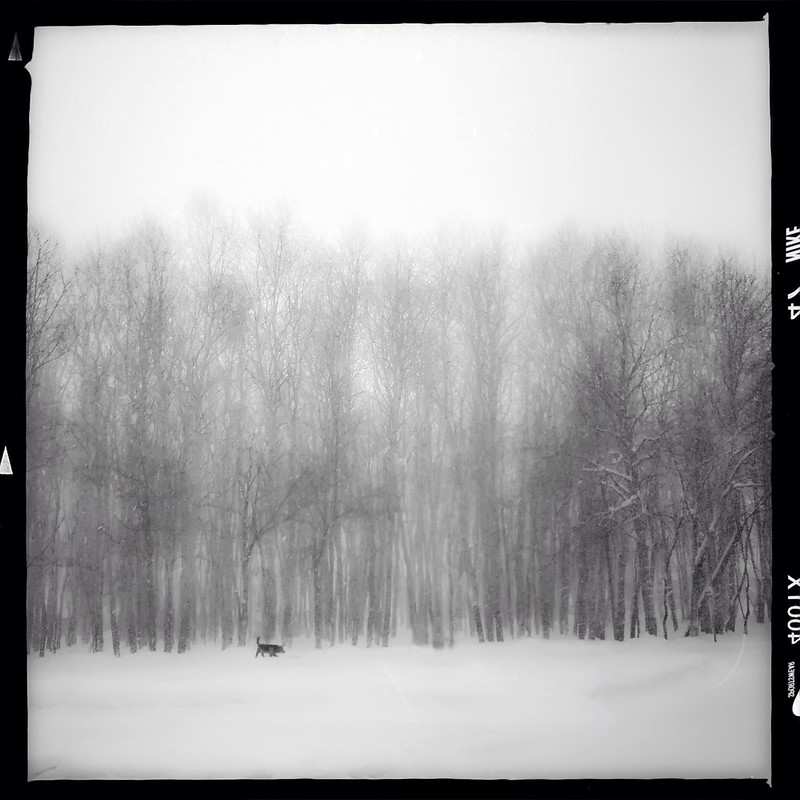 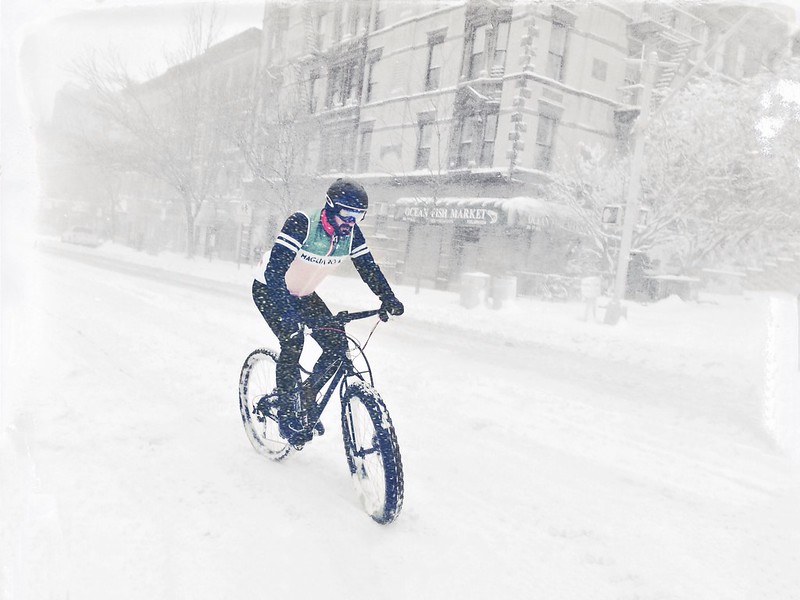 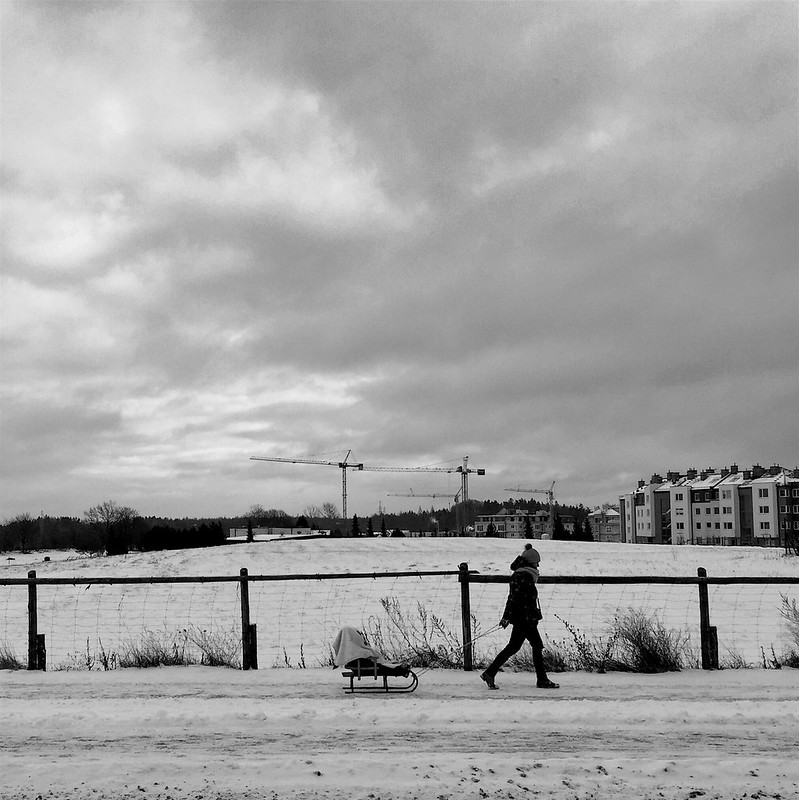 Backstory: Whenever I go out ( or stay in 🙂 ) I have the habit of having my IPhone or some other camera on standby – it doesn’t really matter where you are: the potential of powerful captures is actually in your head but of course some places inspire more!

I was just on my way to a client in a residential suburb of my native city of Gdynia ( North Poland ) when I spotted a landscape of my fancy – my initial goal was to carefully frame it, in fact to recreate my previous approach to that place, so much different in atmosphere with fresh snow. But then, seeing a mother pulling her child in a sledge, I changed my decision and resolved to take more distance, include the fence to my frame, which would strengthen the rhythm of movement – that’s how my passion for landscape and street photography often meet !
The only thing I needed now was that no cars or other passers-by ruined the concept. I was lucky but the “distractors” were not far from success 🙂

I used Snapseed for most of the edition. When I convert to BnW I nearly always start with Pixlr, where I like certain filters. To enhance the effect, I often use Ansel. 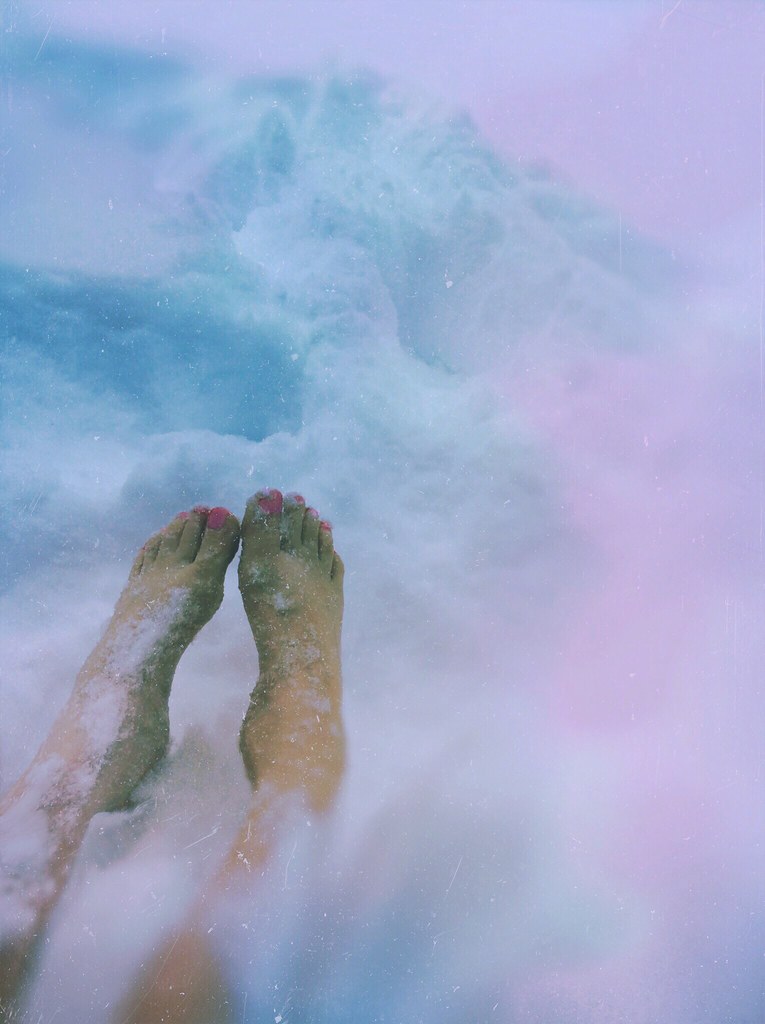 Swimming in Snow by Susan Blase

Backstory: This is what happens when you are snowed in by a blizzard. I was in middle of Jonas dumping almost two feet here and I wanted to try to do something creative with it. I wasn’t sure what but I just jumped into it barefoot and this is what resulted. It was freezing but honestly kinda fun. Thank goodness neighbors can’t really see me. When I came in I went off of my pink toe polish and wanted it to take on effect of swimming in cotton candy. I blurred some in Tadaa and adjusted tone. I then got a great mix of texture and more hues with Mextures. This is my memento of the storm after the snow melts, happy to share it with those who didn’t get to play in it.

Backstory: This image was taken after the first snow of the season. The location was a section of the Katy Trail, in Marthasville, MO. I appeared to be the first one there. The trail lead through a woodland and, because of the snow, the landscape seemed particularly pristine and untouched. I saw myself as a solitary figure going down a seemingly endless path; a motif that is always intriguing and symbolic.

I also wanted to portray my thrusting into Winter,leaving in my wake, the first snow prints in that location. I used an iPhone 6s Plus mounted on a mini tripod in the snow. I triggered the camera with a bluetooth remote shutter to allow me to get into position and(after several attempts) in the proper stance. Shooting from ground level gave the image a more dynamic feel. Also ,the strong diagonals in the composition enhanced the perspective. 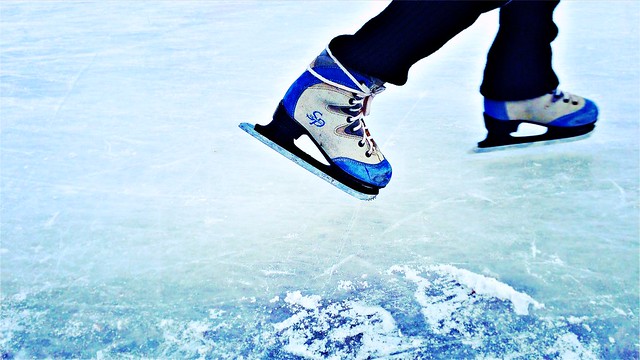 Backstory: My daughter, skating past me at the local rink.

Backstory: i took this photo on a walk over lunchtime. it was cold that day and the small lake was frozen, the thin ice covered with fluffy snowflakes. 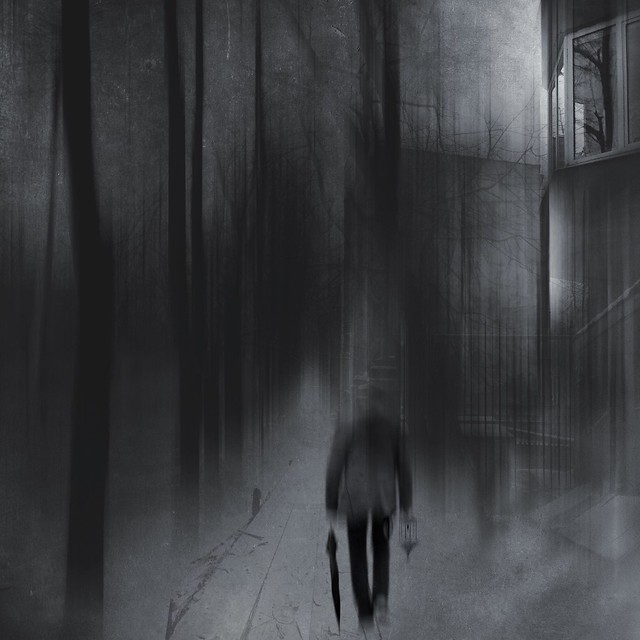 Apps used: I made the main picture on my Iphone 6, then processed applications PsTouchApp and MexturesApp

Backstory: As usual, I would be a bit surreal here – I hope I succeeded!)