Welcome to this week’s Apps Uncovered, our weekly feature, showcasing iPhone art and photography from around the world. Keith Woodlands grotesque composite “Sisters” couldn’t help but grab my attention this week and please read Keith’s generous backstory on the technique on how he created this collage using some app favourites like Mextures, Juxtaposer, PaintFX and Image Blender.

Thank you. as always to everyone who submits to this group. We have some beautiful use of available light in this week’s selection notably Albion Harrison-Nash’s Bunting ll-Traces, Susan Blase’s “Drowned by the sun”, Brendan Ó Sé’s “Daegu”, Sheldon Serkin’s “Gregor”, Ade Santora’s Finger Head and Cold Hard Reality by Matt Brock. Wonderful splashes of colour from Mark Walton’s irreverent “Rubbish” image, great use of textures in “Sailing” by Kawol and fabulous burst of burn’t and vibrant orange in Windswept by Kristen Radden.

Beautifully lit and composed flower joy this week comes from Firery Broome’s “Cherry Pink 1” and Ann Highfield’s “A time for Healing”. And of course, last but never least, the Queen of joy, our dear Janine Graf bringing laughter to our household on a regular basis; Janine Graf’s marvellous “Woof”. I’ll say no more except that I hope you enjoy the gallery and please click on any of the images to see more of each artist’s work on their Flickr stream. 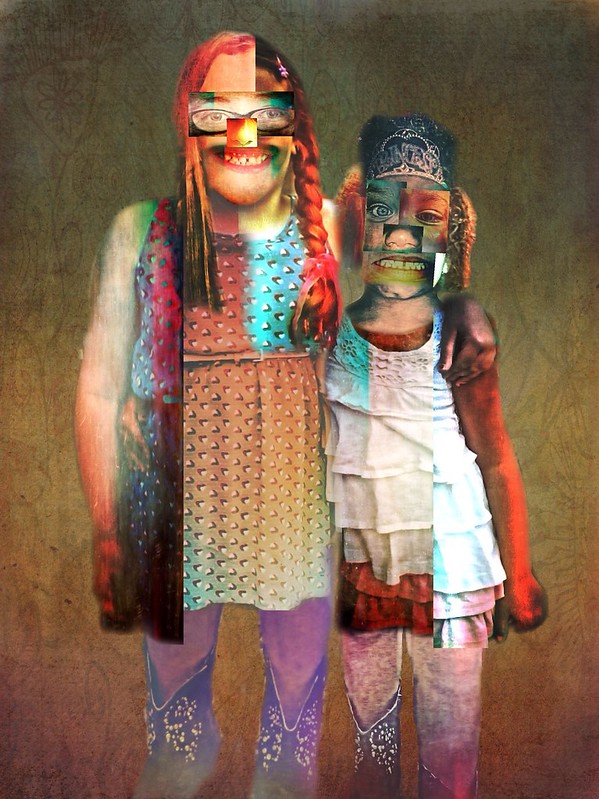 Sisters
Multiple photos shot with iPhone 5s then bits and pieces of each photo was taken from them and used to make this. Apps used were iPhone camera, mextures, juxtaposer, Paint FX and image blendr. This image was inspired by the paint of Salvador dali that was painted by Sidney Maurer. I first started with several photos of the girls and a base photo of the two girls standing together. I took all the head shots of them and selected a section of each shot that I wanted to use in the photo ( like the eyes or the mouth or another section of the head ) then I moved the image of each photo to mexture where I used the the preset destroyed film formula. from there I pick which formula I wanted to use then tweak it some then save the image. Once I got all the images of the head and body done in mexture, I moved the images to juxtaposer where I put them all together the way I wanted them. In the meantime I made a background for the image in Paint FX then saved it to my photo album. I took the image I made in juxtaposer and moved it to image blendr then blended one of the textures I have on my phone just to tweak the image some then added it back to juxtaposer with the background that I made in Paint FX and just added the two images together in there. I hope Ive explained it well enough, any questions Just let me know. I hope you enjoy, thanks for looking. 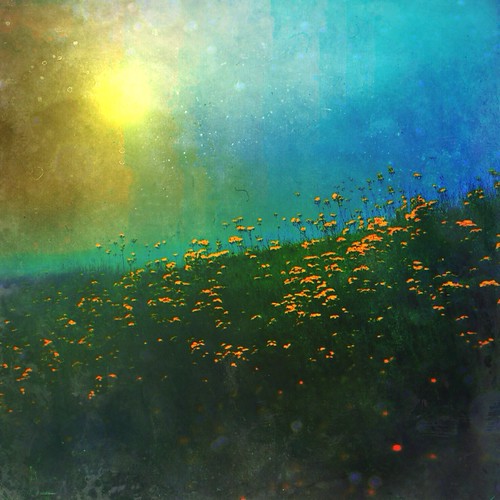 Drowned By The Sun by Susan Blase

This photograph started out a little hazy and distorted by the sunlight. I first went in and further blurred using Tadaa, as well as intensified the color. I further amped up the hues in LensLight and added some of the bits of color you see in the bottom of frame. Most editing was done using Mextures. When I added the right blend, it almost gave it a watercolor effect which I was happy with. The original shot was very pale actually! Now that it’s completed I’m glad I stuck with going on the opposite end of spectrum. 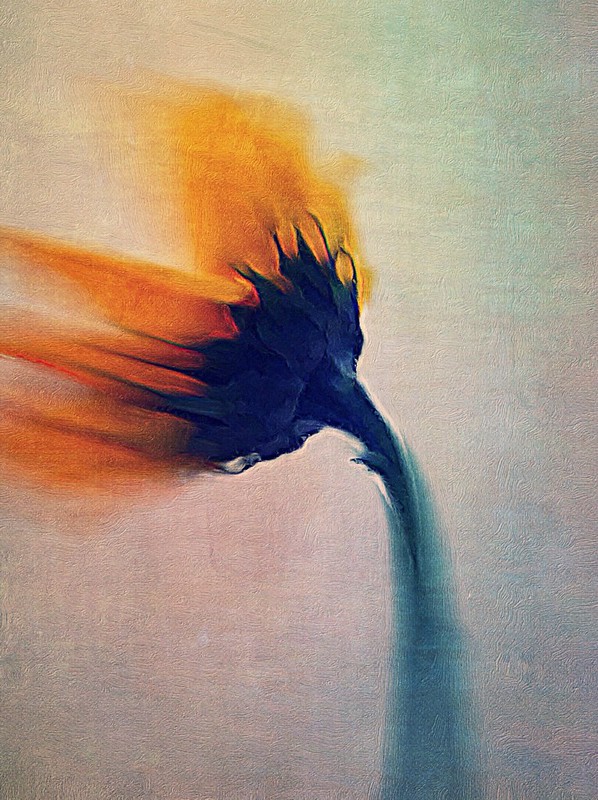 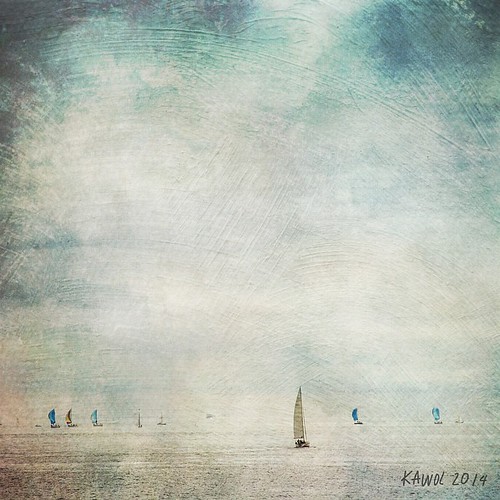 I took this photo some years ago during a wonderful vacation on the Channel Island Guernsey. Lots of maritime motifs to take photos of. This was one that I liked, but I always found it a little bit to bland, even if I liked the minimalistic feeling. Than I got an iPad and discovered the apps. I cropped the photo a little bit with snapseed and gave it a slightly painterly effect wit stackables, both are my favorite apps still. I wanted the minimalism with a little bit more structure and more sky. 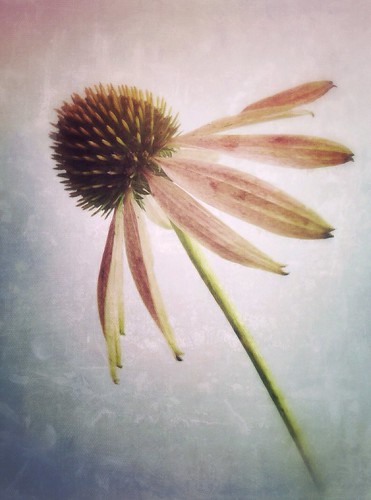 A Time For Healing by Anne Highfield

I love to photograph flowers from my garden and usually try to compose the shots during the morning light in front of a east-facing window in my home. I took this photo using the Pro HDR app and then made a few saturation and warmth adjustments, as I always do right away, in Snapseed. I then added a grunge filter and retrolux filter from Snapseed as well. Using Image Blender, I blended a few versions of the flower to soften the effects. Then, I added some finishing edits using Mextures and Glaze, just to give the whole image a bit more softness. 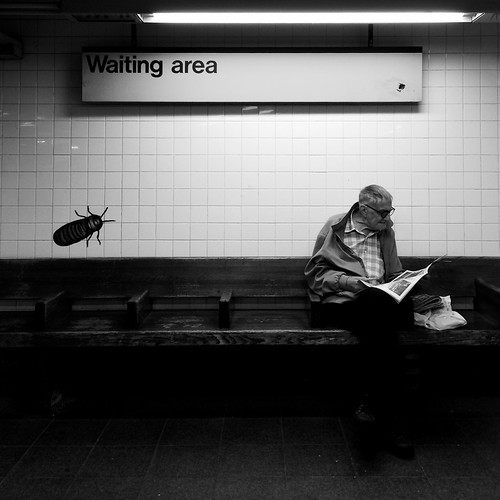 The 81st St. subway station in Manhattan features various mosaics of animals and insects to indicate that it is the stop for the American Museum of Natural History. Entering the station, I came upon Gregor the cockroach and an unsuspecting man both waiting for the B train to Brooklyn. Shot with an iphone 5s using oggl. 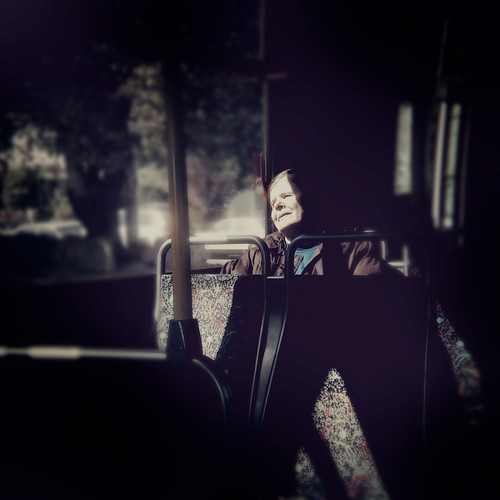 On the bus with a group of students, on our way to photograph, I spotted this woman, with the loveliest expression on her face. Taken with the app Kitcamera. 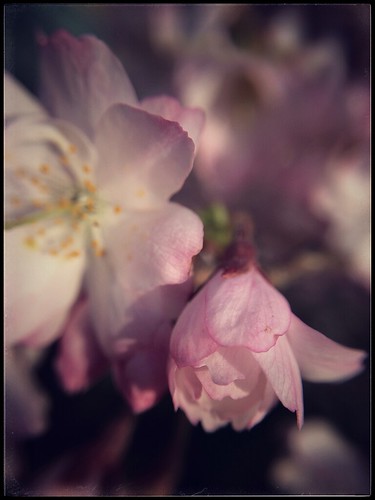 Captured back in April in the early morning on my way to work.
Usual iPhone and Olloclip macro lens combo and iPad Snapseed edit with some very light vintage texturing applied. 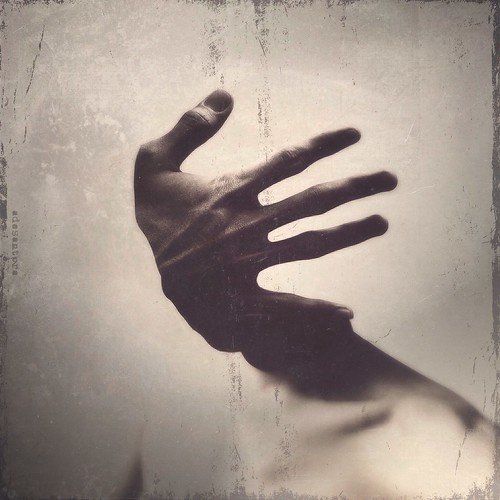 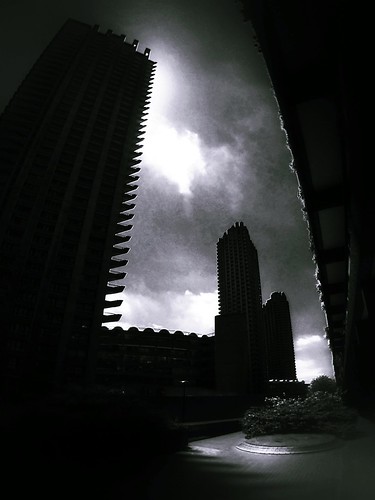 I was taking a lunchtime walk on the wonderful Barbican Estate in the City of London on a beautiful summer day. The light was perfect for photography with plenty of blue sky and textured clouds. I composed this shot to try and emphasise the imposing, brutalist nature of the towers, and to highlight the effect I used the wide-angle lens on the olloclip which also added some appropriate blur and distortion to the image. Later I transferred the image from my iPhone to my iPad where I edited it in Snapseed to enhance the atmosphere of the photo by converting it to monochrome and increasing the contrast to bring out the dramatic edges of the buildings. The title sums up the mood of urban brutality and paranoia which I was trying to achieve with the photo and its processing. 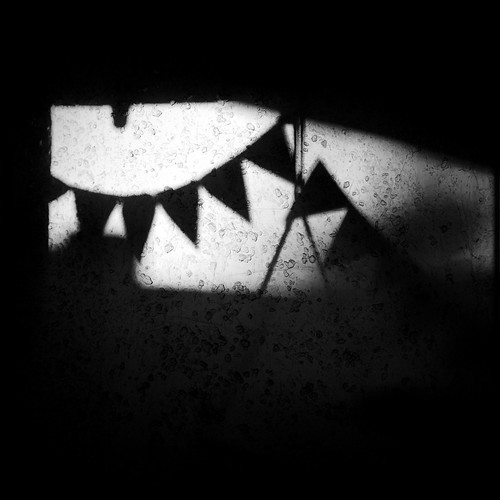 Earlier in the year I was at a family wedding where, as many of the guests were from overseas, there was a large bbq at the home of the bride’s family the day after the wedding. I spent much of the day wandering around the garden and courtyard taking photos of people. At one point a group of old family friends were asking after the photo taking and if it was something I did more broadly. As the conversation developed they showed an interest in what sort of stuff I usually did. Not having anything on hand, I looked around me to see if I could snap something to show them.

Behind me I saw some shadow patterns on the wall on the other side of the courtyard along with some other bits and bobs to help with a sense of depth. Being quite partial to high contrast light and shadow games, it looked just the ticket. I snapped off half a dozen, showed my questioners what I meant and bob’s ya uncle.

This picture is the second part of a quartet and is shot with an iphone 5s and the hipstamatic app. I’ve used the Lowy lens and BlacKeys SuperGrain film, but it is otherwise unedited. 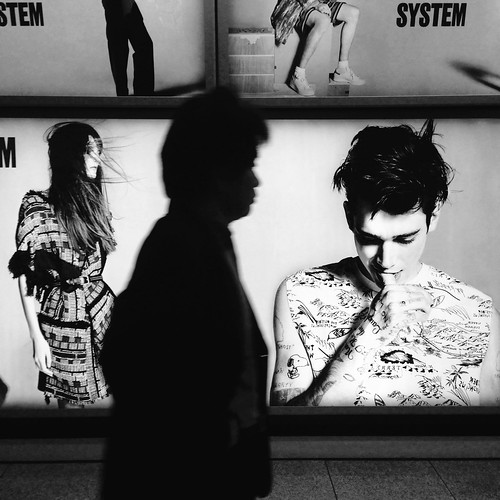 This was taken in Daegu, South Korea in April of this year. The backdrop of the advertising and the bright lights that come from it allowed the passerby to become a silhouette.
I converted to black and white in Snapseed and worked a little on the contrasts too. 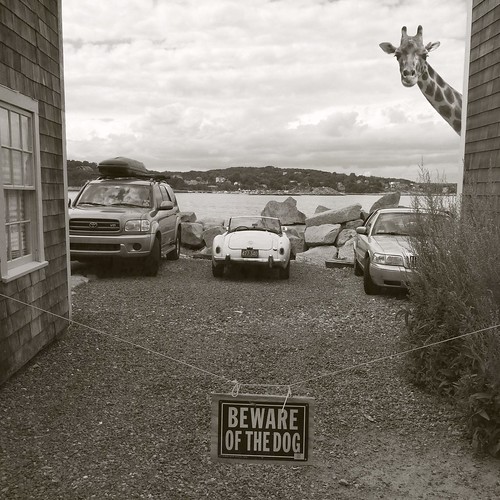 I took this picture while in Rockport, Massachusetts the other weekend. I originally took the picture to show my mother-in-law, as that car in the center there is her favorite car (an MG Midget). Going through my camera roll later, I noticed the “Beware of the Dog” sign and knew it needed a guard giraffe instead. The picture of the giraffe is one of the many I took while in San Diego a couple of summers ago at the Wild Animal Safari Park. She’s saved as a stamp in Juxtaposer, so she was easy to place “behind” the building. I did have to change the contrast and brightness on her a bit (love that updated layer feature in Juxtaposer!) so she’d match the scene better. The “Beware of the Dog” sign was actually pretty dark in the original image, so I used the auto-select tuning feature in Snapseed (love that feature!) and brightened it up so you can actually read it. I finally put the image into ScratchCam and used one of their monochrome filters.