Is it possible for images to possess sound….or the opposite… to have little or no sound? Of course it is; take a look at this week’s gallery for evidence of images that possess little or no sound  and just to mix things up a bit, I’ve included a couple more audible ones at the end of the showcase. Enjoy the (mostly) quiet!

Congratulations to Paul Hamel for being our feature image this week, with what I believe to be the quietest image in the group. If you like Paul’s image, I encourage you check out his wonderful Flickr Stream. Thank you Paul.

Latest iPhone & iPad mobile art classes
If you’d like to learn more about creating art from photos on an iPhone or iPad using apps like Snapseed, Procreate and Superimpose X you might like my new iPhone art video classes.
You’ll find a list of classes here.

Get the latest news
Sign up to iPhoneography Central’s occasional newsletter for latest classes news, giveaways and video tutorials.
https://tinyurl.com/uxpz34e 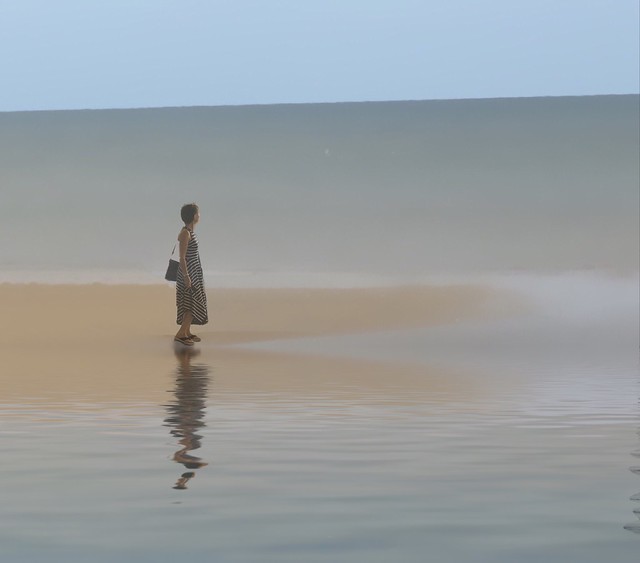 Apps used: IPhone8, iColorama, SuperimposeX, TouchRetouch and Reflect.Backstory: Everything is on hold here. The landscape is flat; the sky blends in with the sea. No waves wash ashore. The figure seems to have just arrived and is perhaps searching for something to appear on the horizon. The landscape was redesigned with IColorama and the character was integrated into the landscape with Superimpose X. The image was then reworked with TouchRetouch and the water reflections were added using Reflect. 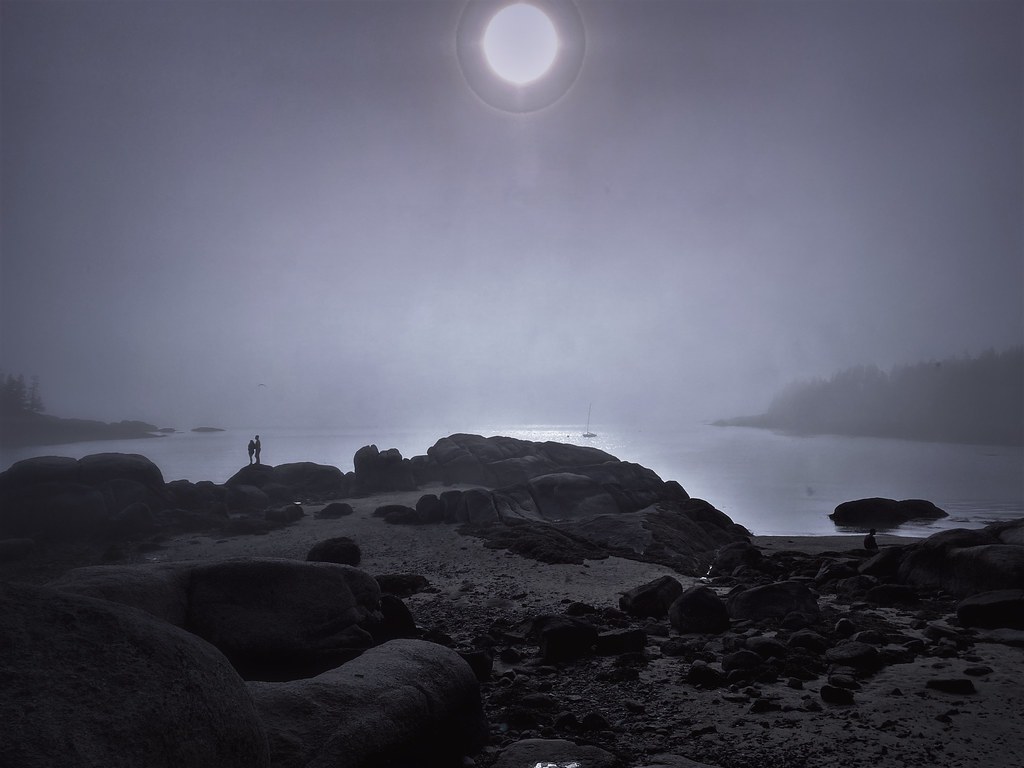 Apps used & Backstory: I am always trying to capture fog and I felt that this quieter tones catch the mood of a foggy evening in Maine.. 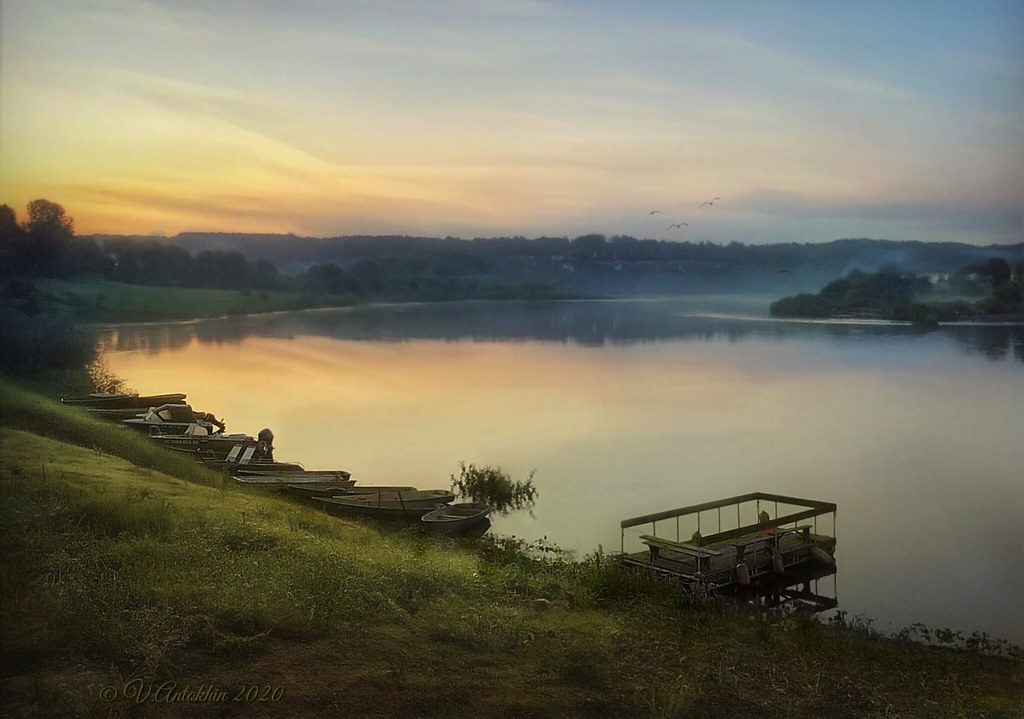 Apps used & Backstory: As always, in the summer I move to the small old town of Tarusa, which is located on the Oka River. In the summer, a lot of people who value beautiful nature come to these picturesque places. Artists, writers, poets, musicians make up the main contingent of city guests. it is impossible to remain indifferent to the beauty of Russian nature. Therefore, I have many photos of these places. as always processing in Snapseed and iColorama. 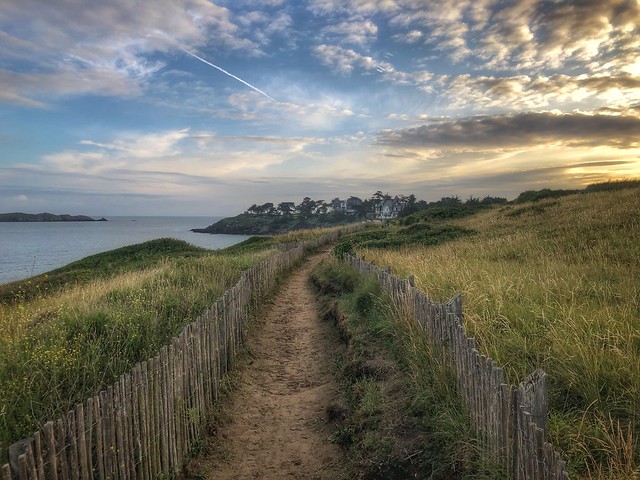 Apps used & Backstory: I used Snapseed app for the post treatment. During 3 months of lockdown I was confined to a location near Paris. It was very hard, I missed the sea of my native French Brittany so much. I took this picture during the first session of running when I was finally able to go back to my favourite place. 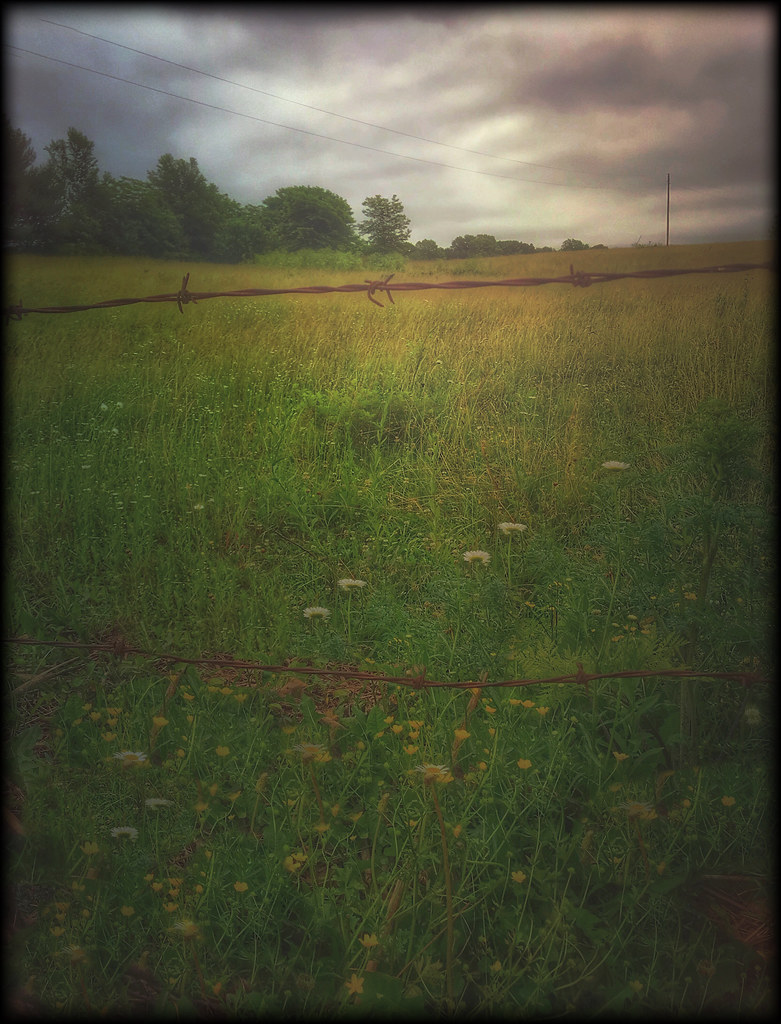 Backstory: Looking through the wires…at more wires. What you can expect to see on a backroads drive. It was a cloudy, cool day when I came upon this rural Missouri hillside. I love barbed wire fences, as long as I don’t have to crawl through them! When I came upon this one, I stopped to admire the wildflowers and grasses that I saw stretched across the field. The colors were lovely, and I snapped several shots. It wasn’t until I was doing a little editing that I noticed the other “wires” above the meadow. Instead of trying to remove them as I often do, I decided to leave both the rusty wire fence and the power lines…. the old and the new, existing peacefully together. 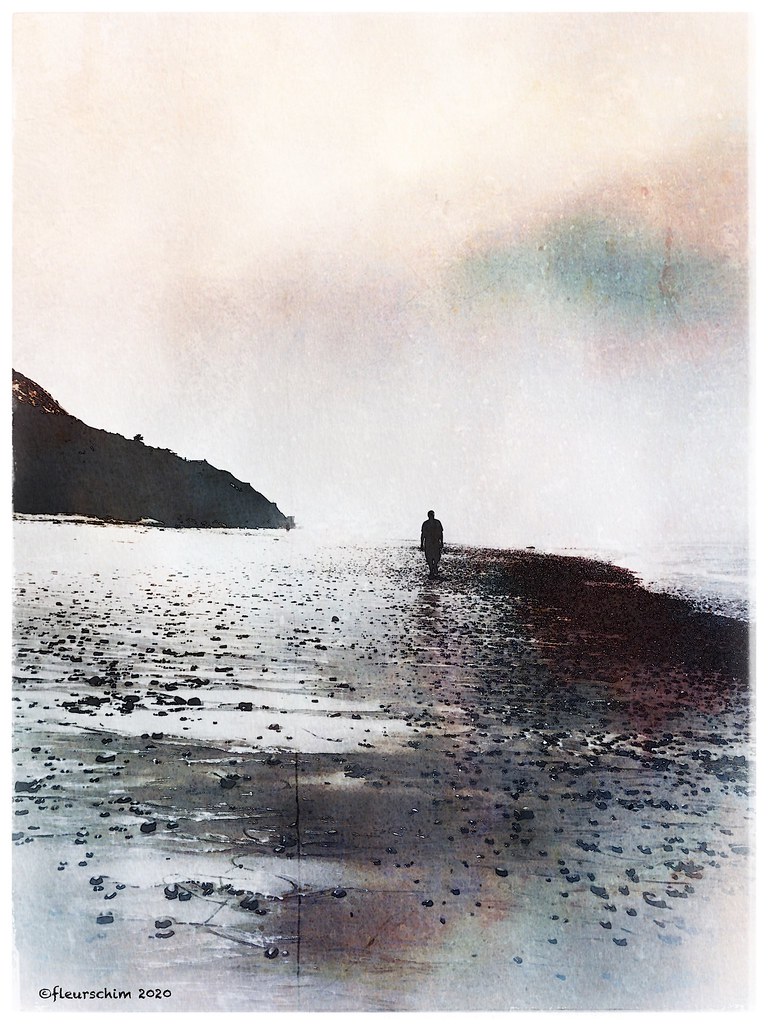 Apps used: This image was captured on my Iphone11 Pro. Later, on my iPad Pro, edited in Snapseed, DistressedFX and iColorama.

Backstory: The beach is definitely my happy place. I love the moody lighting in the early morning, when the sky is overcast. I also like the long views down the beach. The tide was very low; a perfect canvas for imagery.
Few people were on the beach, and I was lucky to be behind a man strolling the along the pebbles at the waterline.This image was captured on my Iphone11 Pro. Later, on my iPad Pro, edited in Snapseed. In “looks”, I like to see what the image looks like in both “morning” and “bright light.” Depending on that result, I further tuned, then edited with a filter in glamour glow and Drama. I was going for a lot of drama and high contrast. I was able to get some neat colors and textures using DistressedFx filters. Last, I edited in iColorama in both sketch and watercolor. I went back and forth to Snapseed, and revisited glamour glow, and fine tuned until I was satisfied with this amazing atmospheric image. 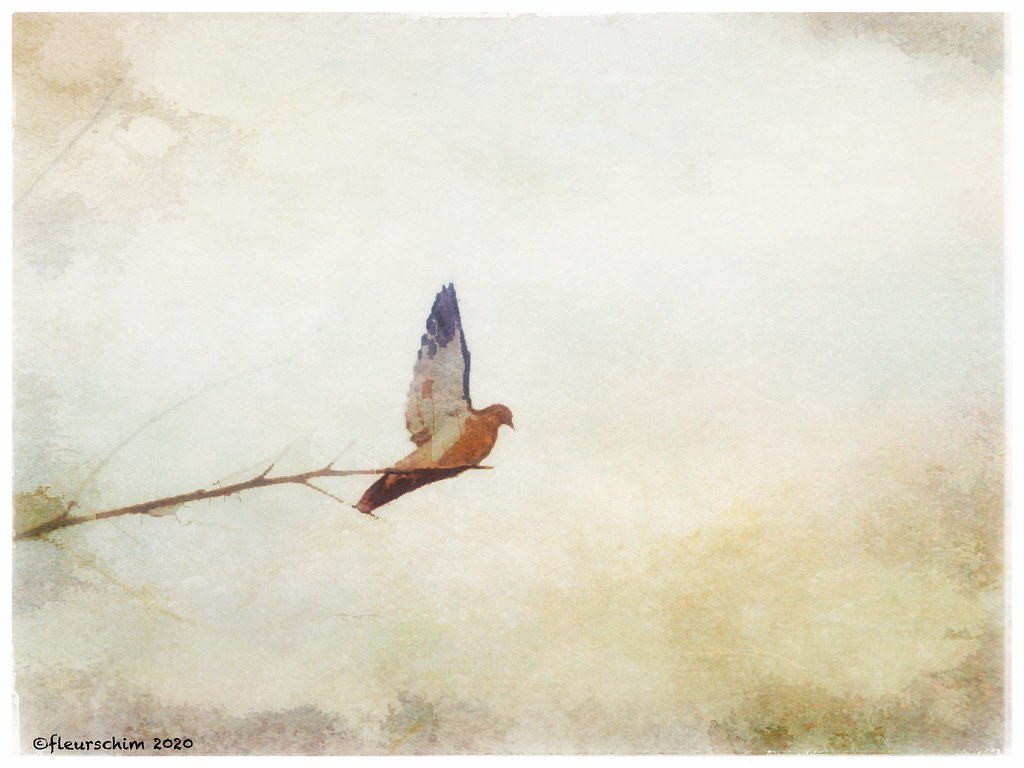 Apps used: Iphone11pro with Snapseed distressedfx icolorama imageblender.
Backstory: This image was shot on my iPhone11 pro, while on my daily hike. I am always scouting out potential captures in the skeletal trees. I was happy that a bird was perched, but was hoping to capture it in “live” taking flight. The bird refused to move! Finally, my husband created a little commotion under the tree, and the bird took off! The fun thing about shooting “live” is that you can edit your shot for the best version. Later, on my iPad Pro, I edited in Snapseed (looks, then the usual tune, details, and glamour glow.)
I edited in DistressedFX for an atmospheric effect. Icolorama has some amazing features and filters. I played around with different versions and ultimately, blended in Image blender. My result was this ethereal beauty. 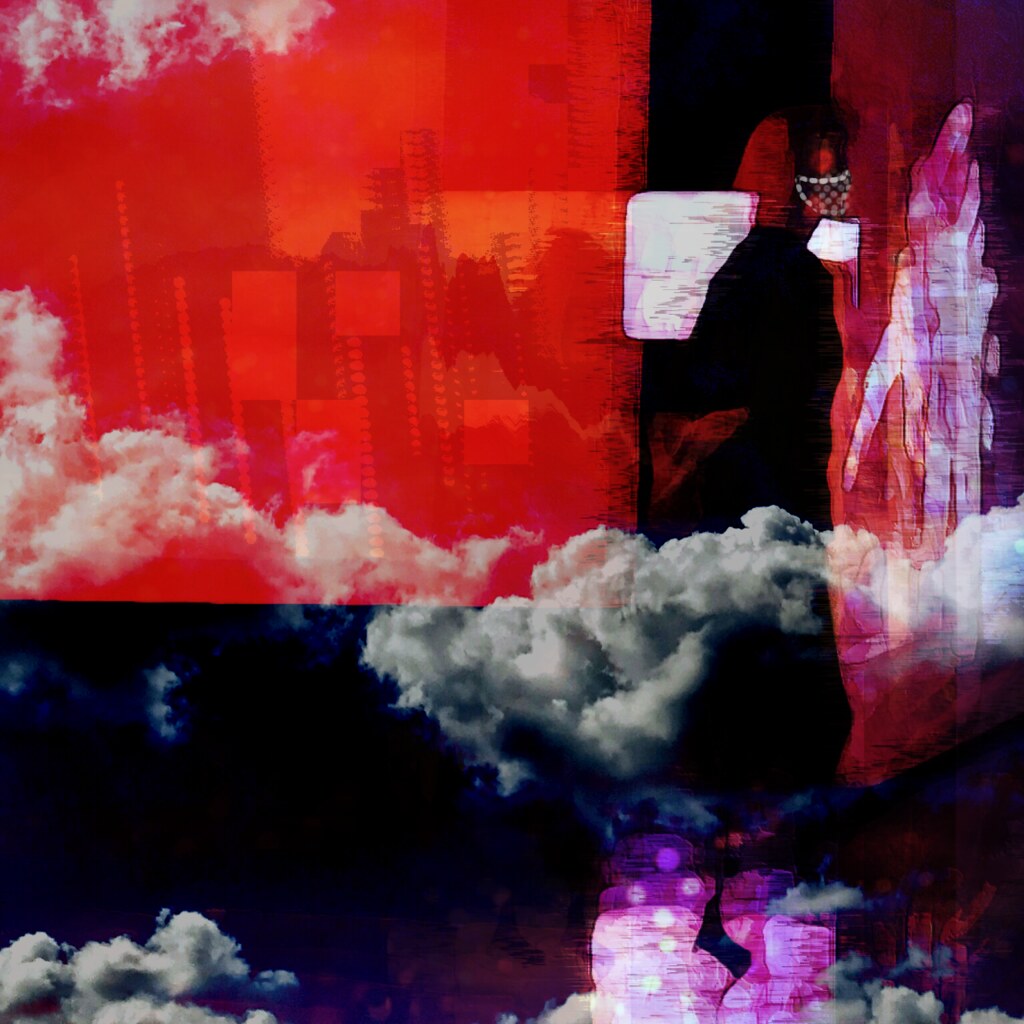 Backstory: I took this photo with the SlowShutter app last year at the Los Angeles County Art Museum and processed it in iColorama. The figures on the right in the background are actually dancers in a film. Though I liked the original photo, I used it as a base for playing around with other apps. In Dianaphoto I doubled-exposed it with the clouds, then I added the design in the red wall and some textures in Decim8, and finally, I blended various versions and painted the mask in Procreate. It has an ethereal quality to it, but also speaks to the reality we are experiencing today. 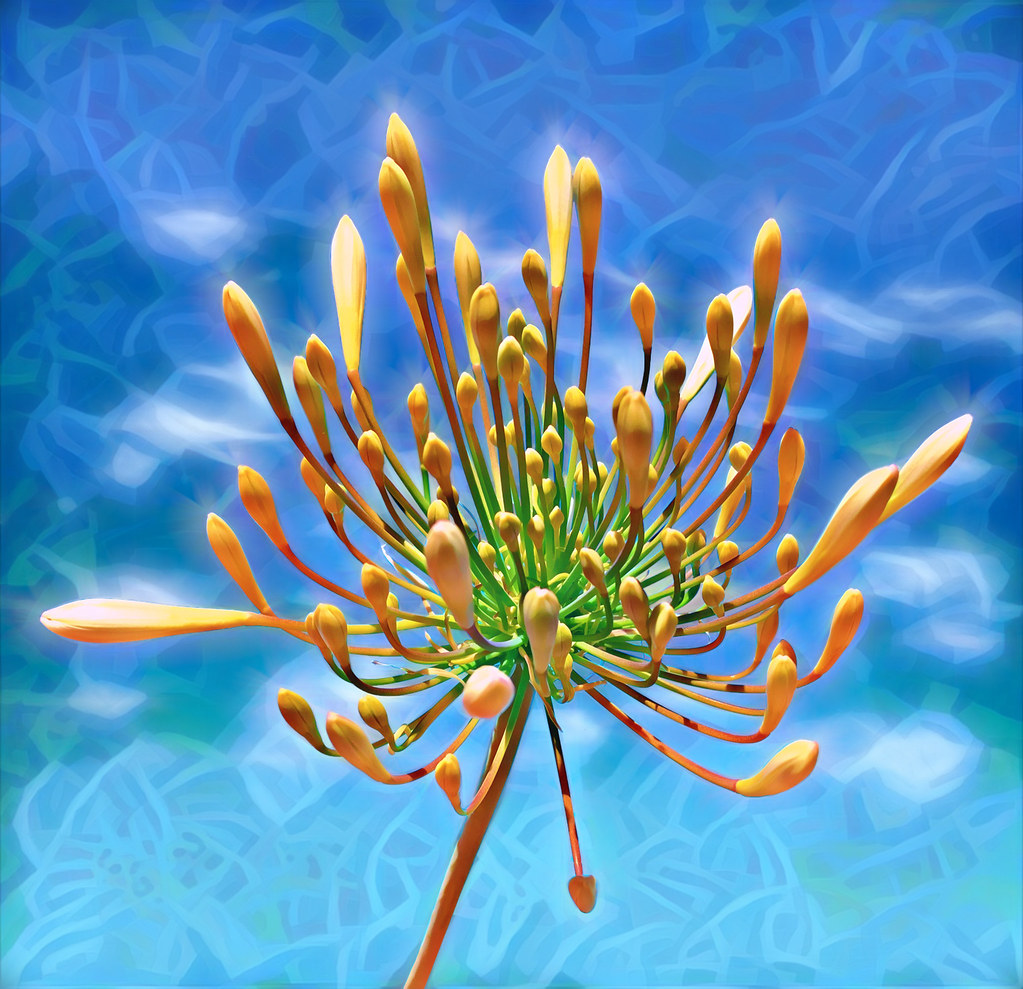 Apps used & Backstory: I shot this with my iPhone X, and since it was still growing in our yard, I held a painted blue sky airbrushed image from my old days as an animator behind the flower, trying to avoid any shadows. I started as I always do by opening the image in Snapseed, to clean up and tunie the image. Then I opened that in iColorama and went to Threshold to help me get a black mask so I could treat the flower independently from the background. Then I tried a few filters in Dreamscope and chose one that had a series of cubist shapes. back in iColorama, I composited that in the background and softened those shapes and reduced their opacity. Then inverted the mask and applied some glows and lighten, again at low opacity. I also warmed up the whitish flowers to push them toward yellow to pop off the blue background. 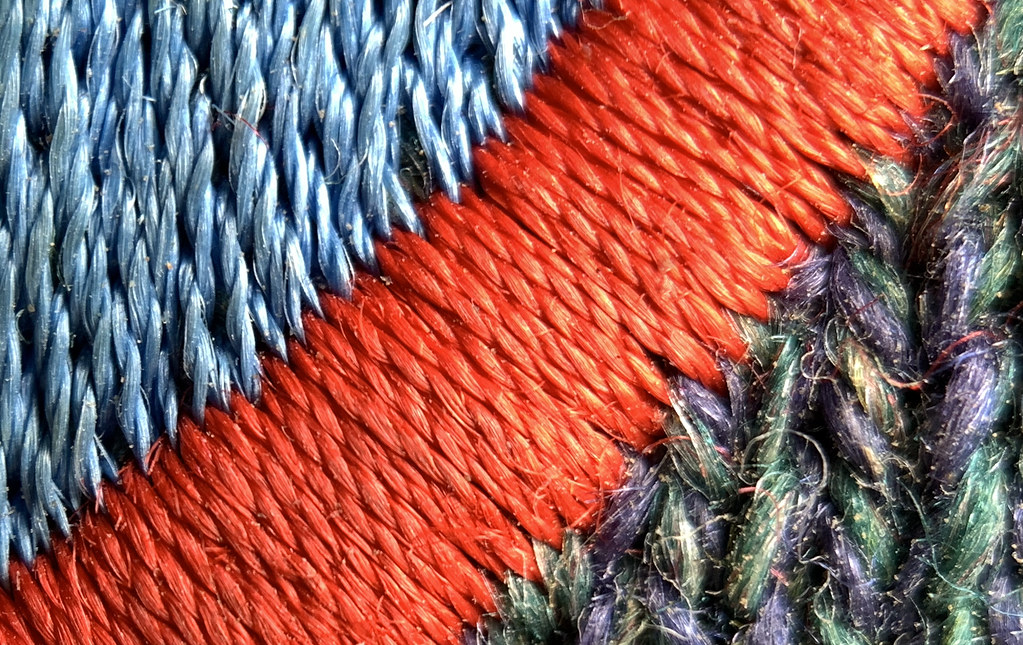 Apps used & Backstory: Taken with an iPhone XS and Sandmarc Macro Lens I shot this abstract close up of a badge made from colored fibers.
No post production, only minor cropping. 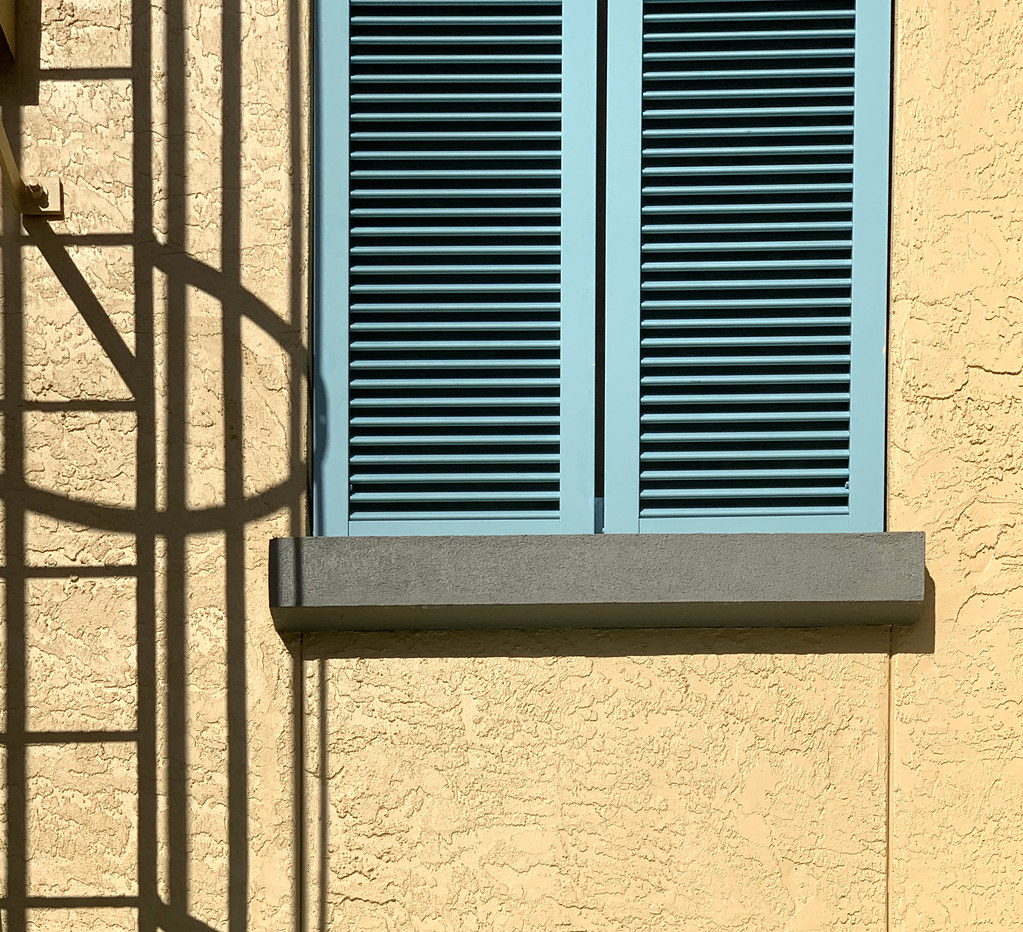 Apps used & Backstory: Looking for ways to get the creative juices going during the pandemic I just happened to walk by this building and noticed the wonderful light of the blue shutters on a yellow wall. It created a nice abstract on a very bright sunny day.
No post production, only cropped to square format.