This week’s Apps Uncovered presents a selection of exceptionally intriguing images posted this past week in our Flickr group. Repeatedly, as I looked though the images, I found myself doing a double-take – finding something unexpected upon first viewing, and even more provocative on the second viewing a moment later.

This week’s lead artwork, “Hannah reflected” by rita colantonio has a fascinating creation story that begins with a photo taken during a posing session where the artist drew inspiration from a painter (Mary Cassatt) in creating an interpretation of the photo that achieves a completely “non-photographic” effect in refining it into a line drawing. 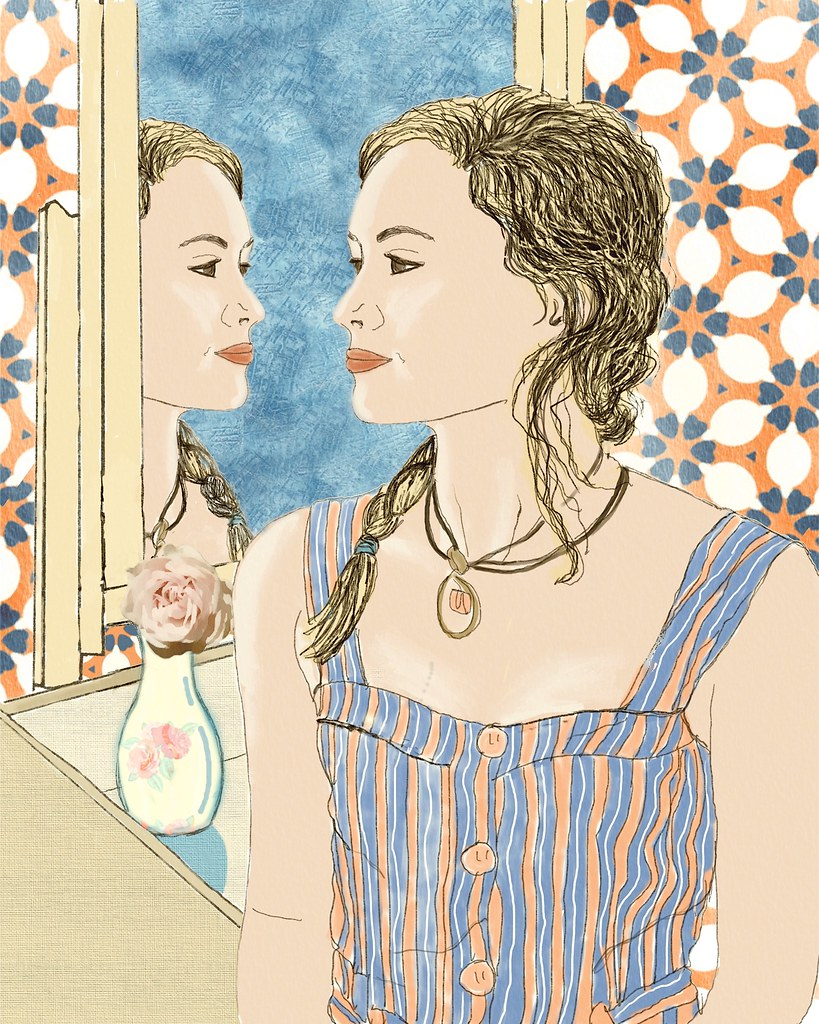 Apps used and backstory: My inspiration for this piece came from Mary Cassatt’s painting The Bath, an artist I have always admired. I love her use of line, limited color pallet and patterns. For this piece I used an iPhone photo that I took of a young model who was posing for our class. I started in procreate with a line tracing of just the model on a blank white canvas and then added in freehand the background elements. I then continued to paint in sections in procreate. Then in Icolorama I added a reversed image in the mirror, some painted details and texture throughout. Finally I worked on toning in IC matching it to the original painting by Mary Cassatt. 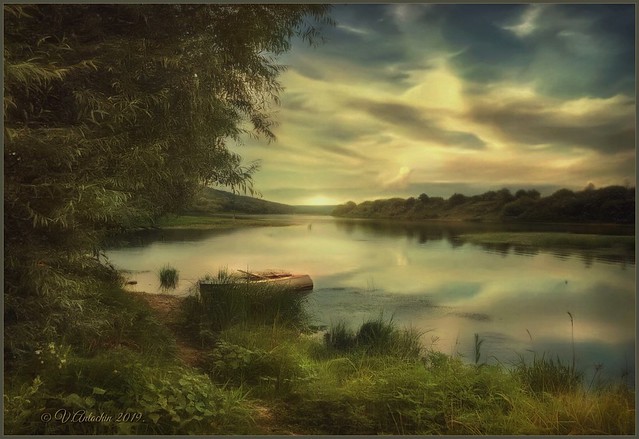 evening on the river by vadim demjianov

Apps used and backstory: In the summer, I live in a small rural town of Tarusa, which stands on the Oka River. In my opinion there is no more picturesque place on earth. I spend a lot of time in walks around Tarusa. I think I was able to convey a quiet warm evening on the river. As always, I take pictures on iPhonex, and processing in Snapseed and iColorama. 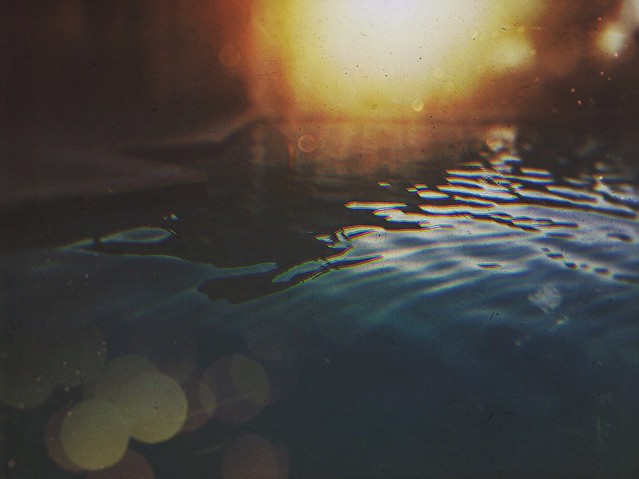 Apps Used: Tadaa, Afterlight and Artist
Backstory: This photo was taken not long ago as the sun was setting on a very hot July day. I’m blessed to have a beach house and here I find both solace and creativity. I wanted to capture a moment as I love summer and swimming at this time, and I’m happy with the mood that I got by using a few of my favorite apps. I tend to start off adjusting some color and focus using a Tadaa. Artist is a newer app for me and it’s got some beautiful overlays that I used heavily in this photo. Lastly I use Afterlight to add some grain and scratches as I love the look of old found photographs. I am always trying to break the idea that iPhone pics are inferior to “real camera photos ”. When I started I had some people telling me my work would never compare to photography done in a more traditional way, I’m happy to see that this notion is being dismissed and apps continue to evolve. I thank everyone who has stuck with me and supported my vision. 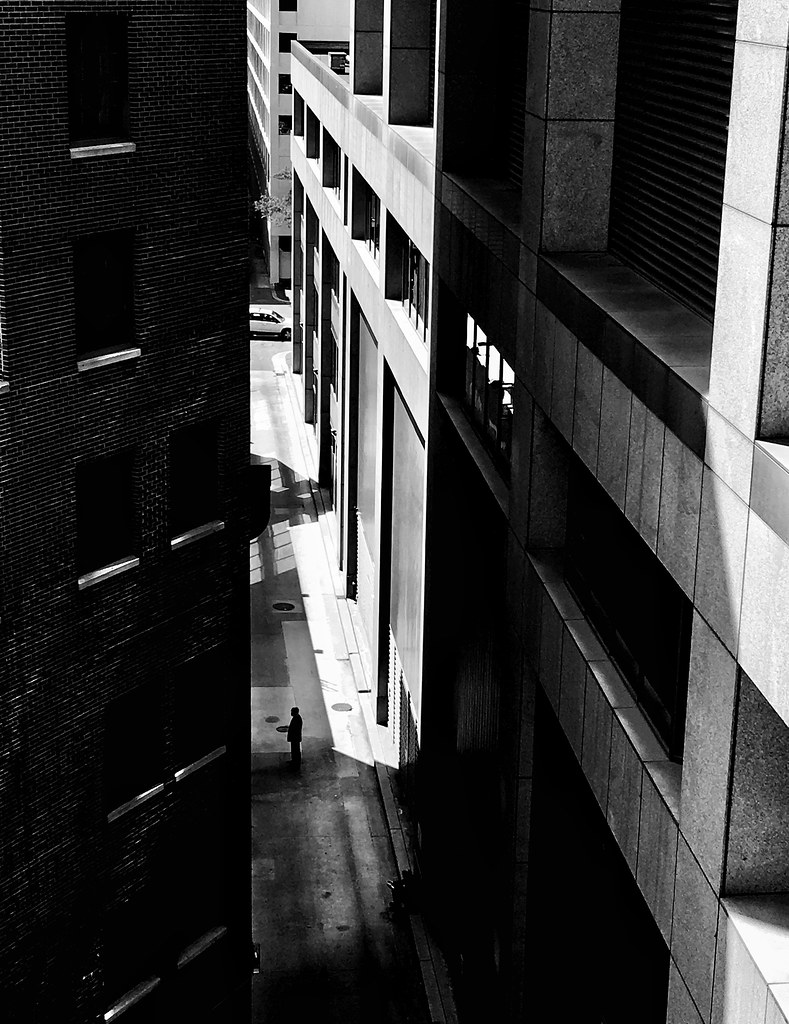 Apps used and backstory: Only the shadows know … iP6s with native camera. Touched with Snapseed. Captured from the 7th floor of a downtown Indy parking garage.

Apps used: Hipstamatic (Tinto 1884 Lens and D-Type Plate Film)
Backstory: Not much to this one, got in the shower and let the water run over me. It was a particularly hard morning emotionally, so this is outcome and the reason for the title. 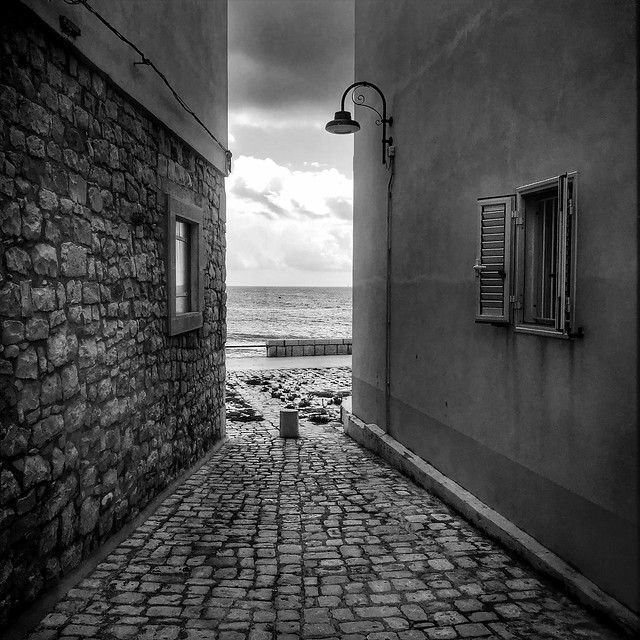 Narrowing down by Tomaso Belloni

Apps used: I shot with the default app on an iPhone 7plus, applied basic editing with Snapseed then imported into Hipstamatic (Akira lens and BlacKeys XF film).
Backstory: An interesting alley in a small seaside village in Sicily and variable September weather. I liked the tapering shape of the alley, the two windows facing each other from very different walls, a streetlamp watching on the scene, the cobblestone floor mathcing one wall, the sea and the sky matching the other. It looked like the scene had been staged for a photograph. 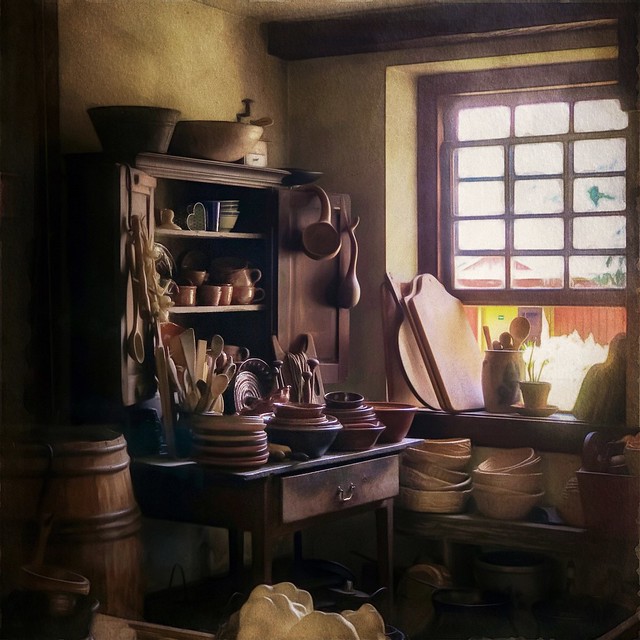 Apps used: hot on an iPhone Xs and processed on my iPad Pro, first in Lightroom Mobile for perspective correction and initial color adjustments, then iColorama for a few filters, and finally into Leonardo for layering of personal textures and final adjustment.
Backstory: The image was made at a local historical site, Landis Valley Farm Museum, in Lancaster County, PA, where I live. 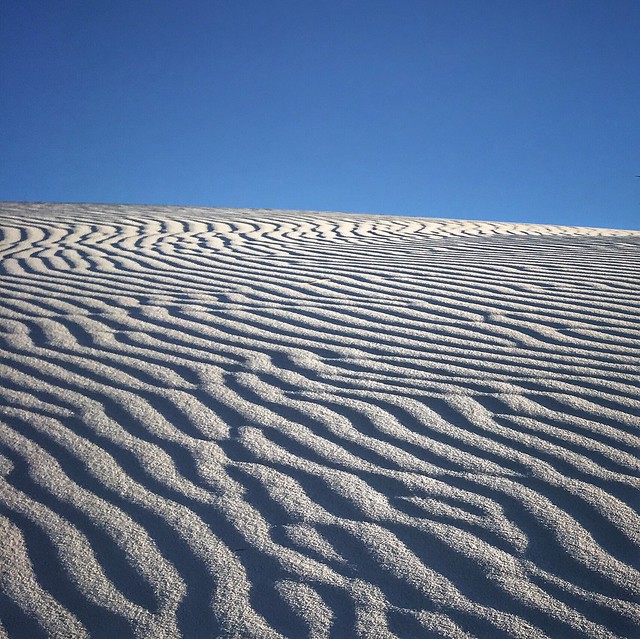 Apps used and backstory: White Sands National Monument, in New Mexico, is a half-day’s drive from where we live in Arizona. The landscape is minimal and surreal, especially right before and right after sunset—like giant piles of wind-sculpted sugar under endless skies, with mountains on all horizons. We went during the winter, while on a long-weekend road-trip with friends who used to live in New Mexico. I still had my iPhone 6s when we visited thesejill gypsum dunes; the photo was taken with the native camera, and edited slightly with snapseed, adjusting just a bit for exposure.” 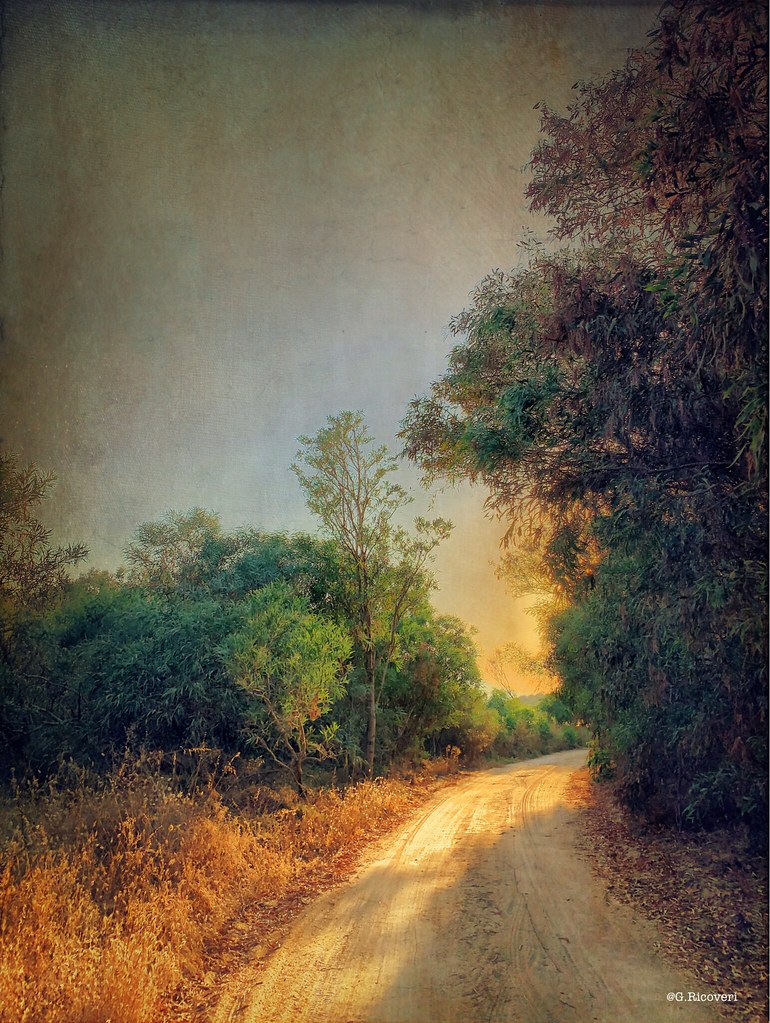 Apps used and backstory: I took this picture at the golden hour during my holidays in Sardinia, I used Pro Camera with the HDR option, for the editing: Snapseed and Stackables 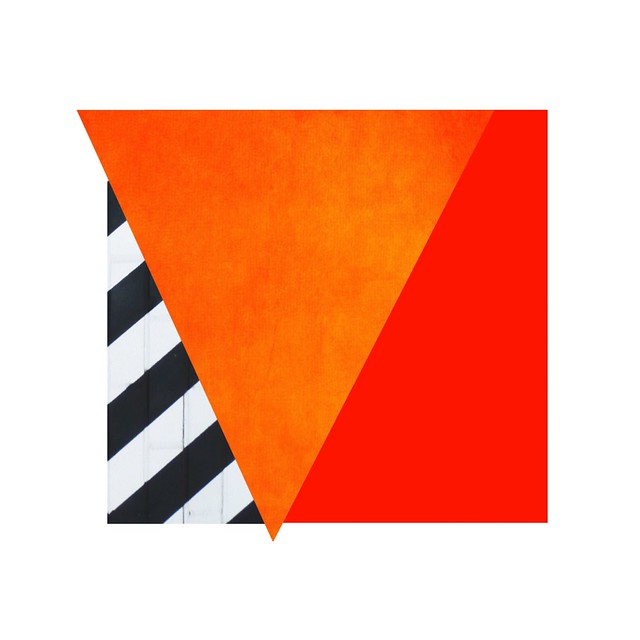 Apps used: Procreate, Mextures, Formulas, SuperimposeX, Big Photo
Backstory: I recently have been exploring the dynamics of shape and how a given form can be used uniquely throughout a specific folio of work. My ongoing series “The Things You Do With an X” was the first such exploration.
This piece is the first in a new exploration utilizing triangular shapes. Each piece has two principle elements, a dominate triangular field and a contrasting repetitive line work or striping. Each of these elements is either a photograph, such as parking lot striping, or a triangular shape made from photographs. Shapes and textures made from apps like Procreate, Mextures, and Formulas (Stackables) are also included, and each piece is then created using SuperimposeX. My goal with each piece is a minimalist shape that achieves balance through color, negative space, and structure.

Apps used: IphonexS cameraplus2 Snapseed icolorama
Backstory: We were at the Museum of Contemporary Art in Krakow, on a cold, snowy day in March. The lighting was very very flat. I saw this beautiful stairway scene, and captured my husband as he walked across the landing, with his reflection. Later, when editing the image in Icolorama, I intensified its black and white tone. It was a cool scene. However, I was not finished.
Recently, I viewed a pic of a stairway mirror image, and was “wowed”. This prompted me to further edit my image. I used IC: Form, and created a great mirror image!
Takeaway: Let your imagination direct where your art flows. Allow yourself to see and be influenced by other’s creativity. You may find that an interesting image can be transformed to a great image! 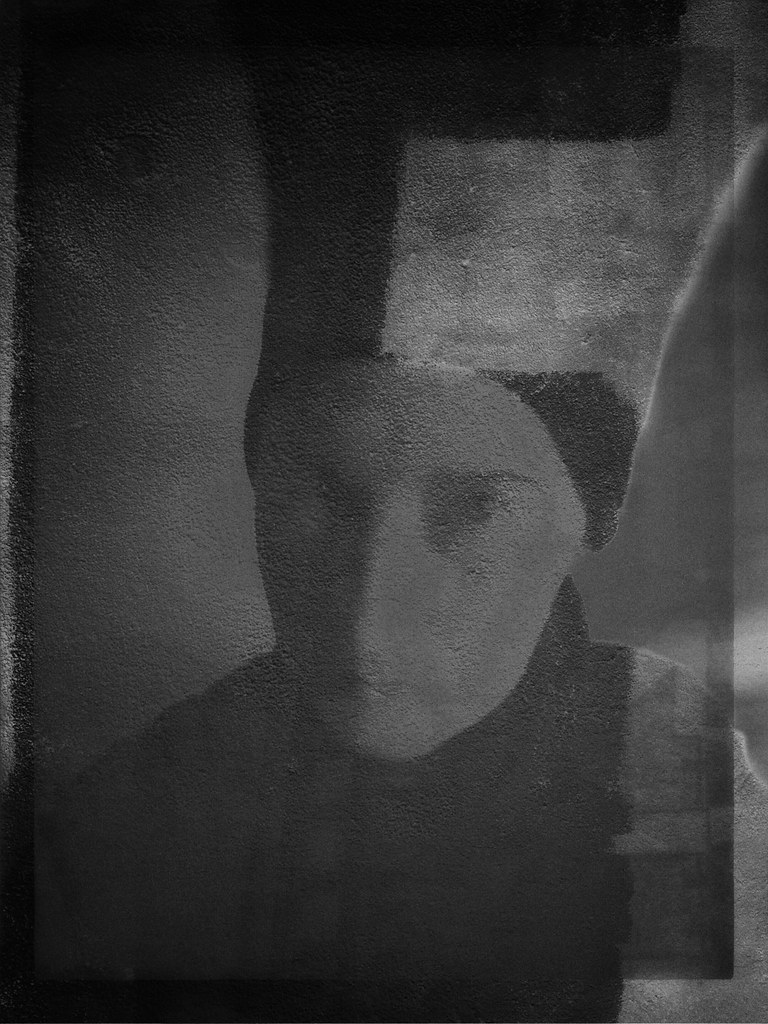 Apps used: iColorama, Metabrush, TouchRetouch, Hipstamatic, Snapseed, Superimposex
Shot with my iPhone6
Backstory: I started with Metabrush to smooth the image. With TouchRetouch I removed irregularities, did some cloning and added shadows with Icolorama.
I used some of my homemade background images for layering and blending in Superimposex. In Snapseed I did the finishing touch and black and white conversion.