The images this week are of people and places, some far away, some close to home. And in two instances, ways to get to these places. 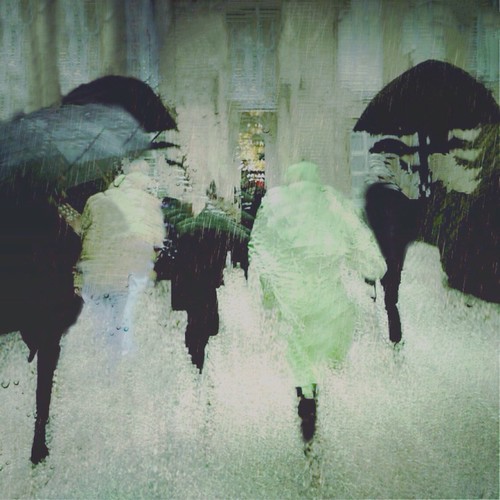 Apps Used: Slow Shutter, Retouch, iColorama, Repix, Snapseed
Backstory: For over a month, it’s raining. Taking pictures in these conditions is a real pleasure because the light is so special and I like to observe people trying to protect themselves from the rain. 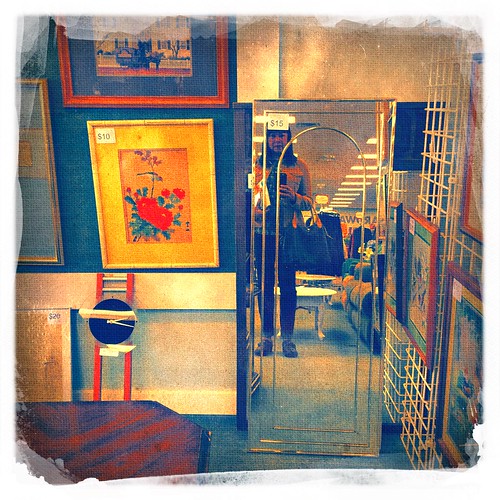 Apps Used: I used the updated Hipstamatic 340 app (Tejas lens + DreamCanvas film + Apollo flash) and tweaked exposure, clarity, shadows, highlights, and texture and grain in the editing suite to produce the image I liked.
Backstory: I love going to area thrift stores on Saturday mornings where I can spend some “me” time to relax from chores and everyday family commitments. This particular store always has framed prints hanging at one end which I love to peruse slowly and I spied the full-length mirror before turning into their large, used book section and hung out there for awhile. On the way towards the clothing section I decided to turn back to the mirror to check it out and take a selfie photo while foot traffic remained sparse. I managed to get one quick shot with the Hipstamatic app before a couple strolled by. I left the mirror for someone else to snag. 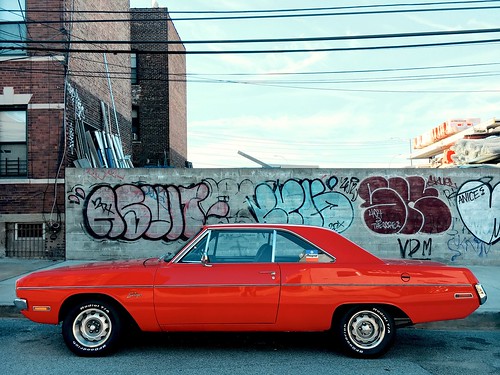 Apps Used and Backstory: I walk by this red car pretty much every day on my way to work. On this particular occasion, it happened to be parked in the shade, right in front of this wall. It looked pretty good to me so I took a shot with my iPhone 6s. I then straightened / cropped the image in SKRWT and used the Filmborn app to make some adjustments utilizing either the Portra 160 or Portra 400 setting – I can’t quite remember exactly which. Finally, I added 25 points of Lux in Instagram. 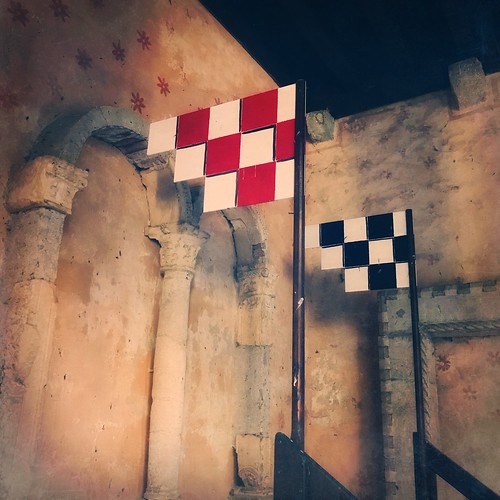 Apps Used: I shot with the iPhone 7+ default camera app, applied basic editing with Snapseed then imported it into Hipstamatic (Tejas Lens and Love 81 Film).
Backstory: This is a corner of the inner yard of the lower castle in Marostica, Italy. There were some wooden structures and I was attracted by these two flags. The combination of lines seemed perfect for a square frame. 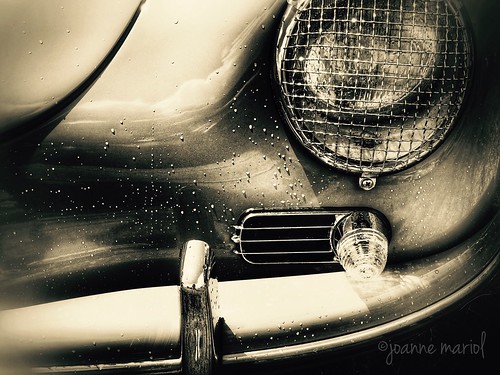 Apps Used: Shot with iPhone 7 Plus and processed with Snapseed and Phonto.
Backstory: I captured this image last summer at a car show after a brief rain shower. I was able to shoot this wet vintage Porsche and several other vehicles before their owners were able to dry them off. 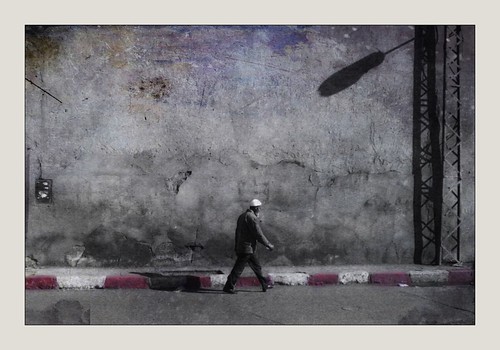 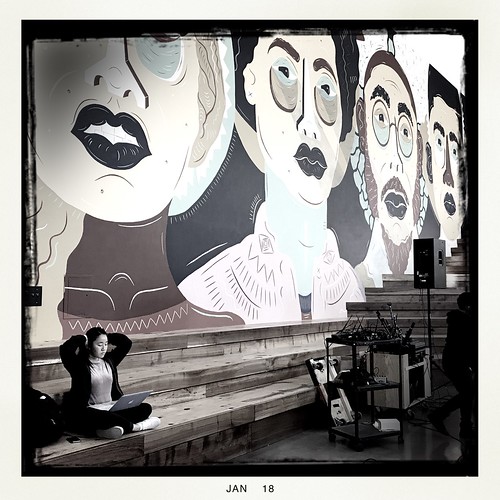 Apps Used: Hipstamatic: Watts + BlacKeys B+W
I decided to do a 365 day project using only Hipstamatic, and though I’ve used Hipstamatic for years, I had never tried the shuffle function. Using the shuffle, I get quite a lot of photos that I don’t like, so if I like a shot, I’ll hit the shutter a couple of times to have a choice of settings. I found this setting through the shuffle function and liked it so much I added it to my favorites.
Backstory: The background of this photo (an artwork at the Berkeley Art Museum) was so richly colored that it was hard to settle for this toned down version, but the warm contrasts, the angle and young woman’s expression captivated me. 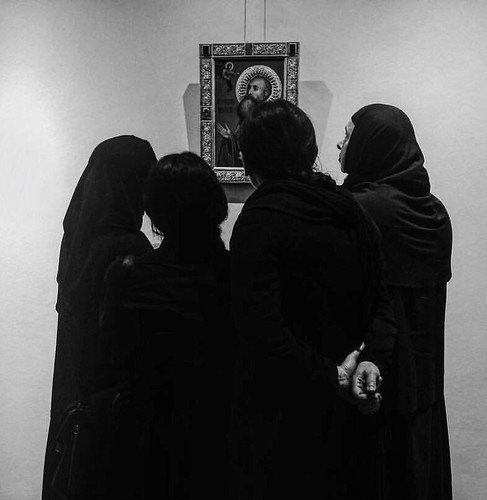 Apps Used: I’m using VSCO, and some times Photoshop CC, if it’s necessary. In this
case, I used them both.
Backstory: At the exhibition of “modern icon” was group of christian women. Black cloth was so beautiful on white wall, I wanted to capture it.

Apps Used: Shot on iPhone X with moment wide v2 lens. Processed in Lightroom CC Mobile (The free functionalities) and Snapseed. I brought up the shadows, added some contrast, converted to B&W and did some minor dodging and burning.
Backstory: I was in the midst of a very difficult time, therefore decided to take a mini road trip to work on it. Also, I was dying to test out my Christmas present to myself… the moment wide 18mm v2 lens.
The 160ft (48m) spire of this “redundant status” 1800’s church caught my eye in the distance, so I decided to go and investigate. The door handle was broken on the inside, and a telephone number was listed in case one became trapped inside! So I propped open the door with a brick and went cautiously in!
The wind was howling outside at around 60mph (100km/h), the inside felt eerie, yet tranquil. I am considering a revisit in less harsh light. 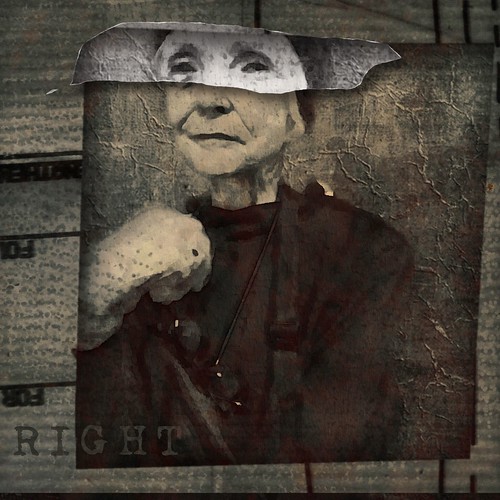 Apps Used: This image was shot with an iPhone 6 and the apps used were Snapseed, ImageBlender, SuperImpose, iColorama, RiPix, and Over for type.
When I work on an image I go from one app to another and let the image take me where it wants to be. The finished image is usually the product of 10 or 12 iterations.
Backstory: I met Lorrain at a discussion meeting in a church basement, and I was impressed with her fortitude. She seemed independent and somehow gave the air of having lived a full life. I later met her when I was photographing a social in the same church basement. We had an interesting conversation, about how she had had a prison ministry in her past life. I love to hear stories from older people because they are so much more than they appear to be. I asked if she minded if I photographed her and she agreed. She seemed at ease. I especially liked the way she looked at me in this photo, with a knowing yet amused glance. I was drawn to her eyes. 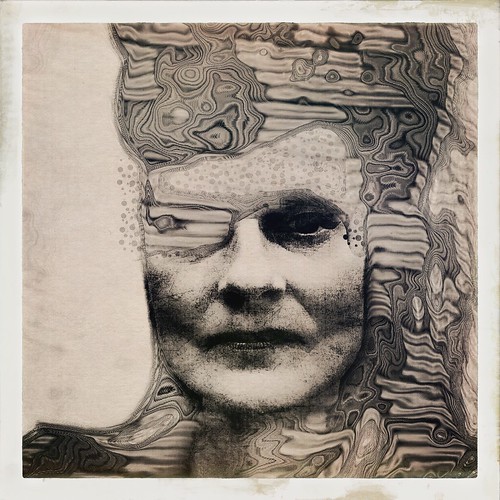 Apps Used: The original self portrait taken with the native camera iPhone 6+, Snapseed, Superimpose, ArtStudio, Repix, iColorama, and Hipstamatic.
Backstory: This image is a self portrait entitled Unbalanced. It’s my attempt to portray the science of life.

Apps Used: This photo was taken with Slow Shutter on the iPhone 8. It was processed using Procreate and Snapseed. 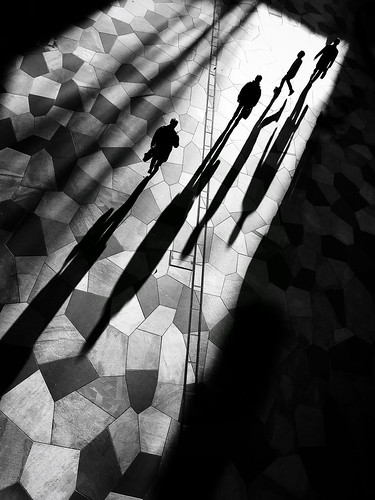 Apps Used and Backstory: “Early birds”’ was shot in Tokyo in the early morning at a favourite location of mine. There’s only a small window of time when you can get this shot before the sun gets higher in the sky. It also has a perfect vantage point for shooting. Photography is not permitted at this location so the iPhone is ideal due its discreet nature. There are a couple of security guards that do the rounds and, if they see you with a DSLR, they’ll be onto you in no time. With the iPhone you can just shoot away without drawing attention. On this particular day I wanted to catch a group of shadows and I was lucky to get these four people walking close to each other. I then increased the contrast in Snapseed and slightly cropped the image. 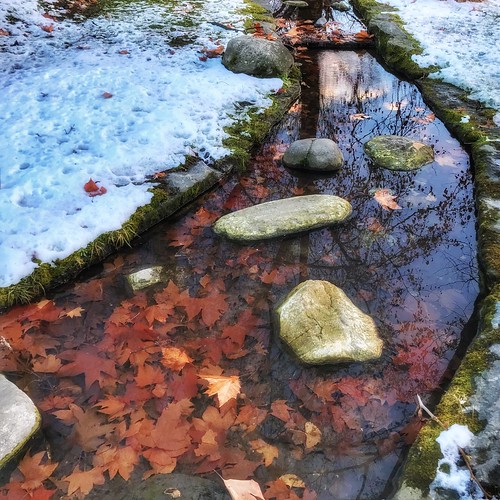 Apps Used: I shot with the iPhone 7+ default camera app and applied only basic editing with Snapseed.
Backstory: Locarno, Switzerland in the last days of the year is cold and it had snowed the day before. I was attracted by this creek in a small park along the lake and found the right angle. The transition from autumn to winter. 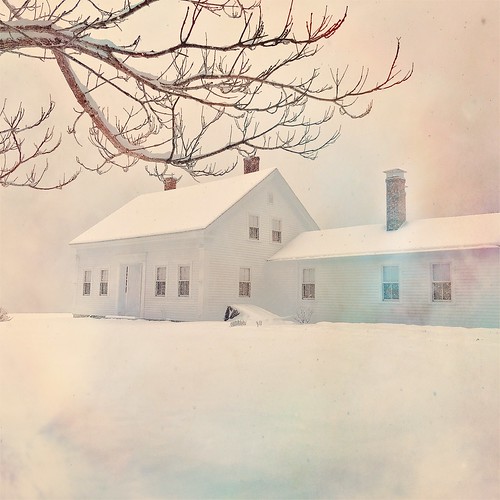 Apps Used: This photo was taken with the Hipstamatic App. Hipstamatic has a feature called, “shake to randomize,” which allows the photographer to randomly choose a combo by shaking the iPhone. I have gotten some marvelous surprises using this feature and the combos are ones that I wouldn’t have put together. It was freezing when I took this shot…. I shook, took the photo, and had a nice surprise! 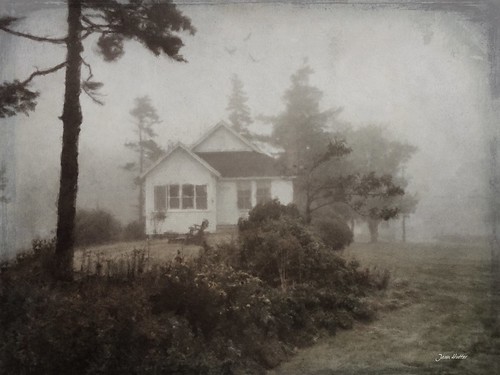 Apps Used: iColorama, Touch/Retouch, Procreate
Backstory: I took this photo near Brunswick Maine. My friend and I were attending an art workshop there and we stayed in this cabin. This particular morning it was so foggy and everything was so soft and damp,a great atmosphere to take photos. It is hard to believe but this was in the middle of the summer. I am in the process of taking an iColorama course so I am pretty much trying to stay in that app. I am finding it to be a very powerful app and it has really grown on me!