Welcome to this week’s Apps Uncovered, our weekly feature, showcasing iPhone art and photography from around the world. Artists also share the apps they use and often the backstories too, giving us a fascinating insight into the creativity and techniques used in the journey the image makes from the artist’s eye to the completed digital image we see on our screens.

This week welcomes old faces and new. Fairly new on the block, Jason Farrar steals the lead spot this week with his striking colour image “0054 Lonely Pastels”. I adore the colours in this image and the irregularities like the dark split in the left window that add interest and mystery to this otherwise fairly symmetrical image.

Veteran Apps Uncovered star, Cedric Blanchon returns with another of his dark humoured images, perfectly executed as always. Enjoy stunning, dramatic black and whites from _N_X_ and Apps Uncovered regular David DeNagel. We end the showcase another dark beauty “Rococo Noir” from Nettie Edwards (Lumilyon) shot in Painswick Rococo Garden in Gloucestershire, UK. There is little processing done on Nettie’s shot; sometimes – infact – often, it is all about the composition.

Thank you to all of you who make this feature such a pleasure to select from every week and don’t forget to click on any of the images to see more of each artist’s work on Flickr.

This past fall, my family and I were walking around a small reservoir near our house in NJ. We came upon this little building that is used as a maintenance office or something. I was immediately taken with this doorway and windows combo – particularly the odd choice of colors. So, I framed up a shot on my iPhone 5S utilizing the native camera app. I edited the shot in Snapseed on my iPad as I like to use the larger screen when possible. This image is the result. 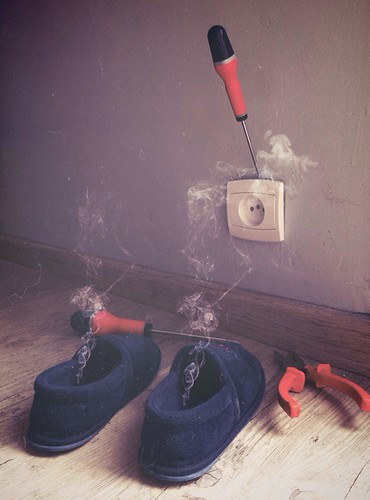 Later i would be electrician, like my daddy! by Cedric Blanchon

This photo was made at home, surrealism and black humor, everything I love, It is all done with my iphone5s and ProCamera. Surprisingly, there is little editing. It is the staging and the idea which is more important for this photo. I added smoke with Spacepaint and a filter with Rookie. When using Spacepaint and you save your photo, the resolution is reduced to keep the resolution to the maximum, I used Superimpose, then loaded the picture without smoke (background) and the photo with smoke effect (foreground). I then erased everything and then I left smoke the smoke reappearing effect. Then I saved and my photo with the smoke effect in full resolution. There are apps that do not backup full resolution such as Noir app, so it is sometimes necessary to “cheat” to save in full resolution

Conception, composition, planning, etc., more often that not boils down to “see, shoot, move on”. This is the case for the subject of this photo, who I was drawn to because of his seeming melancholy. I shot this with Hipstamatic’s Oggl.

I noticed the gentleman and the group on the other side of the road and had a fairly good idea of how I wanted to frame the shot by including the bin, the street sign and the road marking as inner frames. I knew that it was quite an ‘everyday’ shot and at first glance might seem a tad uneventful, but I was hoping to present an intimate portrait, despite being at a distance. I wanted to depict the sense of isolation and/or loneliness we city dwellers all feel from time to time, despite living in such close proximity to so many others. 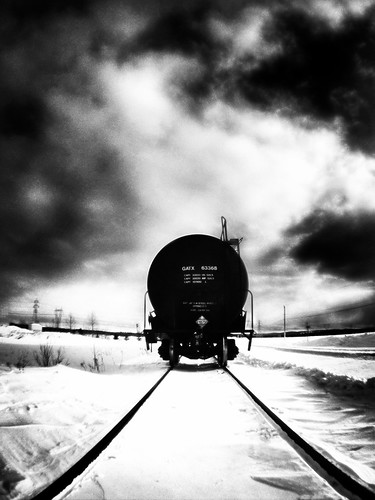 I took this photo recently, during the afternoon where my goal was to photograph snowy landscapes. I wandered in the countryside not far from home and I remember experiencing all kinds of impressions in these vast fields covered with snow: vastness, solitude, desolation, inhumanity or even the end of humanity.
On the way back, I saw this lone wagon on an abandoned track in the middle of a field. It seemed to me that, by its nature of dark human artifact lost in the middle of all this whiteness, almost post-apocalyptic, it had expressed my thoughts on snow. I also imagined McCarthy’s novel The Road and the thoughts of concentration camps began to emerge in my mind.
Either way, I looked for the best way to take a picture. After a few attempts, I felt a vertical picture taken with the Olloclip wide-angle gave a good result: the wagon remained at the center of the photo and became the main focus, especially because of the rails leading into the picture and the carriage set against the dramatic sky, I managed to capture something of the feeling of immensity.

Apps used: I took the photo with VividHDR “Bleach” which gave me the hardness, contrasts and omitting midtones seemed to me to give the idea of the harsh indifference of winter. For once, the editing work has been minimal: a little definition with Drama in Snapseed and grain in Noir Photo. Very quickly, I realized that, for tones, the interest of the picture lay in hard contrasts: minimal production worked best with the elements of the picture (the rails, the carriage, the field, sky) with the austere and hostile rigours of the climate.
Apps used: Snapseed, Noir Photo and Vivid HDR

Backstory:
I have always loved seashells . My wife had placed these in a room as decoration and I felt they would make an interesting subject. Originally,I photographed the shells in color. Afterwards. I chose some of the images for black & white conversions,emphasizing their form and structure.
I placed them on a small table and decided on a compositional arrangement. A window on the right provided the natural light..Bracing myself, I took the shot, handheld with an iPhone5 using Mattebox.
I post processed the image using a Mattebox filter, “Fading B&W.” I removed any slight distractions in HandyPhoto. I enhanced the mood of the photo by adjusting the grit,grain and emulsion in Mextures. Finally,in Snapseed, I made tonal adjustments and added some vignette, trying to highlight the evocative stillness of the piece. 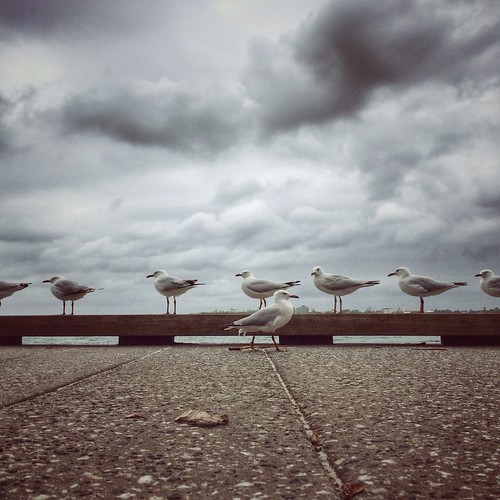 I took this shot using my iPhone 5s. I had it on square format. It was a bit of on overcast, rainy day and I was out for a walk along the beach when I saw all these gulls lined up facing in the same direction. I did my best to sneak up on them so that they didn’t fly away. I had to crouch down and put my phone on the ground to get this low to the ground perspective. By the time I had done all this, one gull had decided that he would be a bit of a rebel and head in the other direction. It wasn’t, therefore, the shot I intended to get but in the end, but I liked this one even better than all of the birds facing the same way. I did a small amount of tweaking in Snapseed.

Retrospection by Pu the Owl

I took the original picture in Reykjavik in 2010. It was a double exposure taken with the ClassicToy app and subsequently filtered over in Infinicam. Going through old images from the iPhone 3GS (the one I used at the time), I found this again and thought to reshuffle it a little with the help of Image Blender. As memory and perception of past experiences develop with time, so do images, sometimes.

Ironically I was looking through a gallery of 2013 best images when I looked up and saw the sunlight streaking across the clock on the wall. No ordinary antique, the clock really was my grandfather’s clock, and I have very strong memories of it and him and it’s place on the wall in my grandparent’s house. This cascade of memories is best triggered by my opening the door to wind the clock and smelling the air inside which seems to hold some of the very air from their house a half a century ago now. I won’t go so far as to say the sunlight was my grandfather calling out to me but I did grab my iPhone and used Oggl to shoot about a dozen shots before the sunlight disappeared. I then transferred the image I thought best to my iPad where I used Filterstorm and Snapseed to clean up the image and add mood before I finished it in Oggl again with the Wonder lens and Uchitel 20 film. 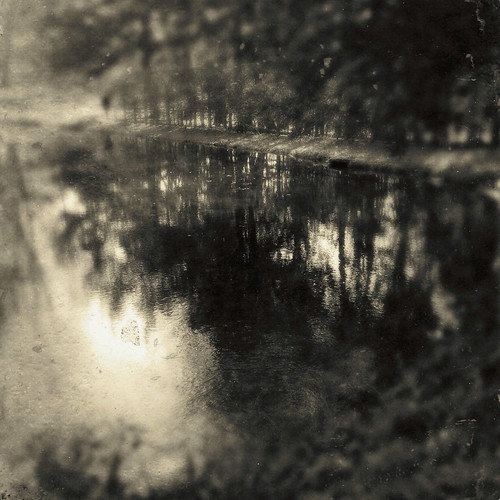 I’ve been visiting Painswick Rococo Garden, here in Gloucestershire, since 1989, during which time, I’ve witnessed its transformation from overgrown wilderness to England’s only complete example of an 18th century Rococo style garden. A beautiful, tranquil place, especially during the week and on rainy days.

It has taken me some time to “feel” the structure of the garden and begin to make images there that satisfy me. The Rococo period is generally considered to have been one of pleasure and frivolity but there is a darker side to be glimpsed. Despite appearances, this photograph was shot on a dry, sunny day (rare here in England, this winter!)