“We are never more fully alive, more completely ourselves, or more deeply engrossed in anything than when we are playing.” – Charles E. Schaefer

The importance of play in creativity has been voiced by many great philosophers and teachers throughout history and in the world of iPhoneography, I am happy to say that the results of play and experimentation are in abundance. For many stifled creatives, the iPhone gave us back our creative expression, freedom and the joy that we had more or less forgotten about or had buried deep down since entering the world of responsible adults and the tethered obligations these positions afford.

The gallery this week highlights examples not only of being playful in the photographer’s approach to choice of subject matter, illustrated by Susan Blase’s delightful and mischievous “Full of quacks” but also to our approach to experimentation with the apps to see where the experimentation takes us as shown in Jo Sullivan’s exploration of Enlight with her piece “Ready to Burst” and jun yamaguchi’s expression of Autumn using a combination of painterly and pattern generating apps. I hope you enjoy the gallery this week as much as I did choosing the images.

More top talent in the group this week comes from the following iPhone photographers and artists:

Have a great week shooting and editing and don’t forget to play!

THANK YOU to all of you who have enabled photo sharing on your photos and to those of you who have always done so. As a bonus this week, the amount of images included in the gallery showcase is much higher, since there is usually a certain amount of drop-off when group members don’t include apps used and therefore, unfortunately, cannot be included in the gallery…however everyone seems to be paying attention to the guidelines of the group and including the necessary information so thank you very much…your cooperation is greatly appreciated!

For more information on the group rule changes, please see below:

IMPORTANT CHANGES TO THE GROUP:  It is a real pleasure for Bob and I to pour through the weekly gallery of your images each week. We love reading about the stories and techniques behind the images and then sharing the best of them with the world. This can take a few hours to put together, and can even longer when image-sharing is disabled on a Flickr member’s images. 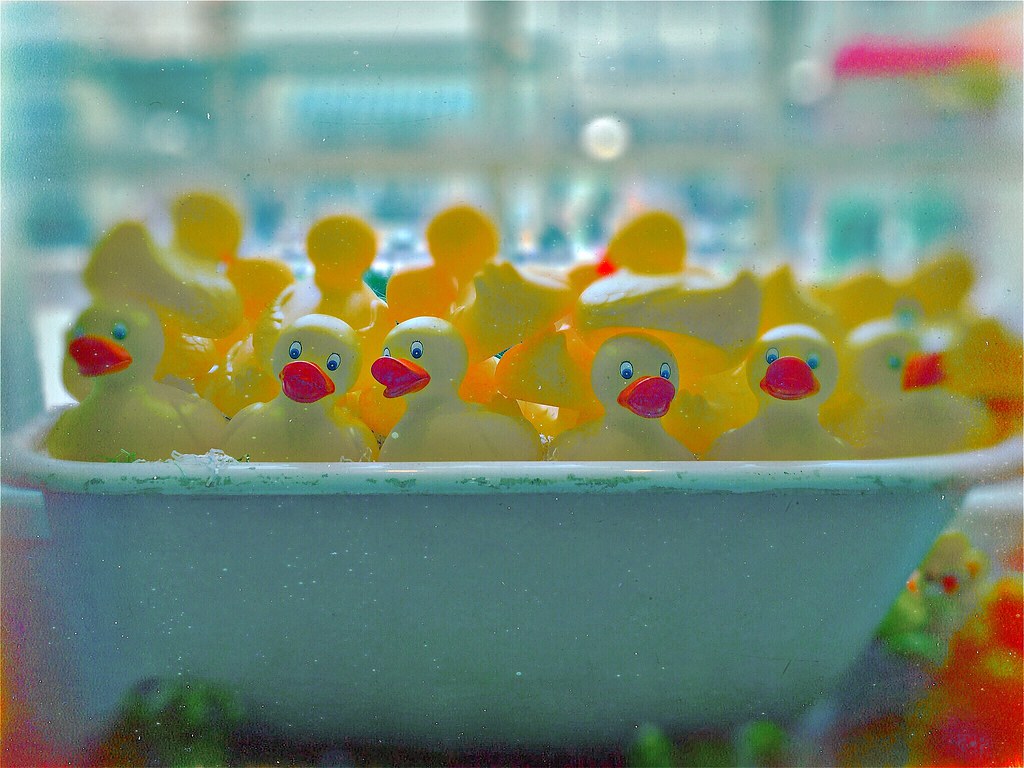 Apps used: Tadaa and Afterlight Backstory: This was taken in Cape May, New Jersey. I try to take a ferry over there at least a few times a year. I love baths and this is my favorite store in town. They always have very cute rubber duck displays and it was just a very hurried shot. Most editing was done with Tadaa, I tried to blur out the surroundings as much as I could. Was still looking too “normal” so I found a good filter combo that accentuated the duck’s beaks. I then went into Afterlight to add a few retro touches and there you have it. Although it was in middle of heat wave that was melting Northeast, I still had a really lovely day and this was a nice rememberence of it. 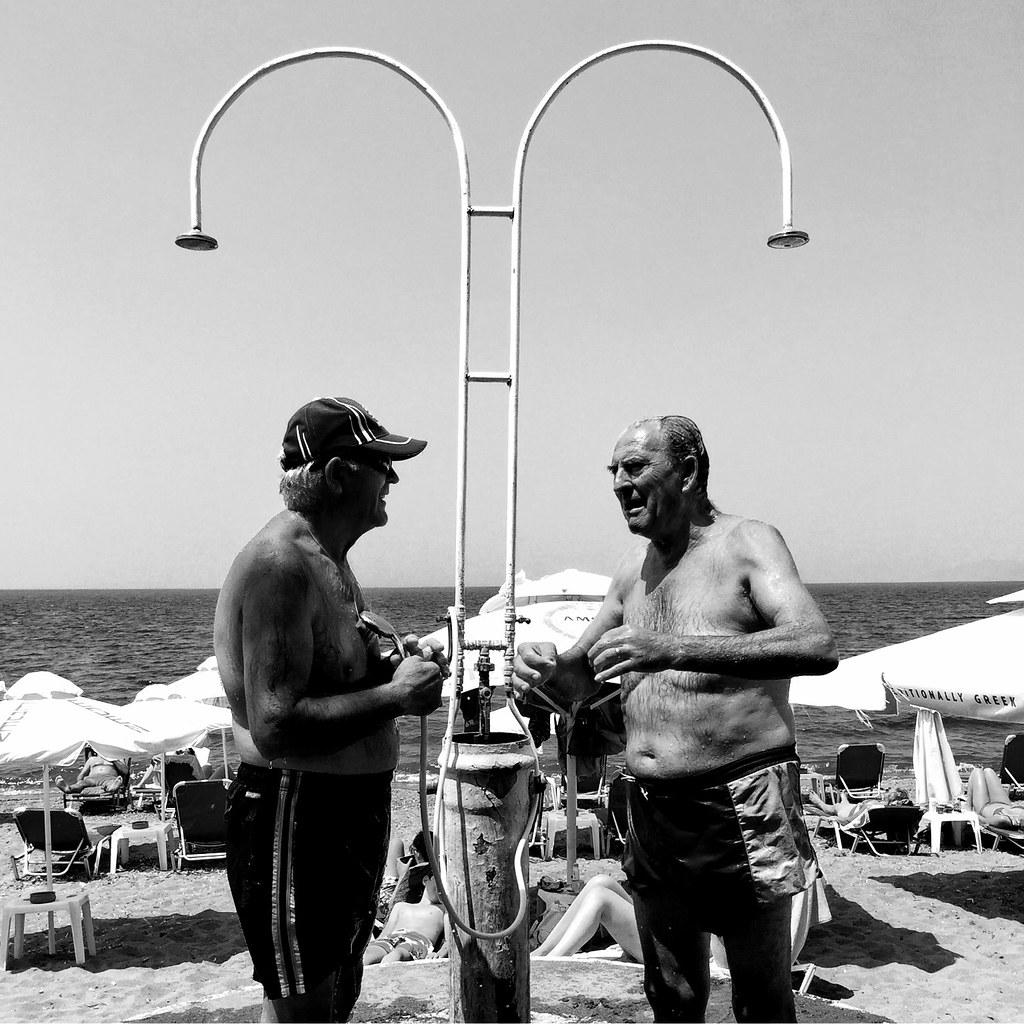 Apps used: Captured and edited on an Iphone6 with Snapseed.
Backstory: This photo was taken in Petra, a small town in Lesvos island. I was first attracted by the shape of the showers. When I saw two old friends chatting and coming through, I waited them to approach and took several shots. This was the one I like most. 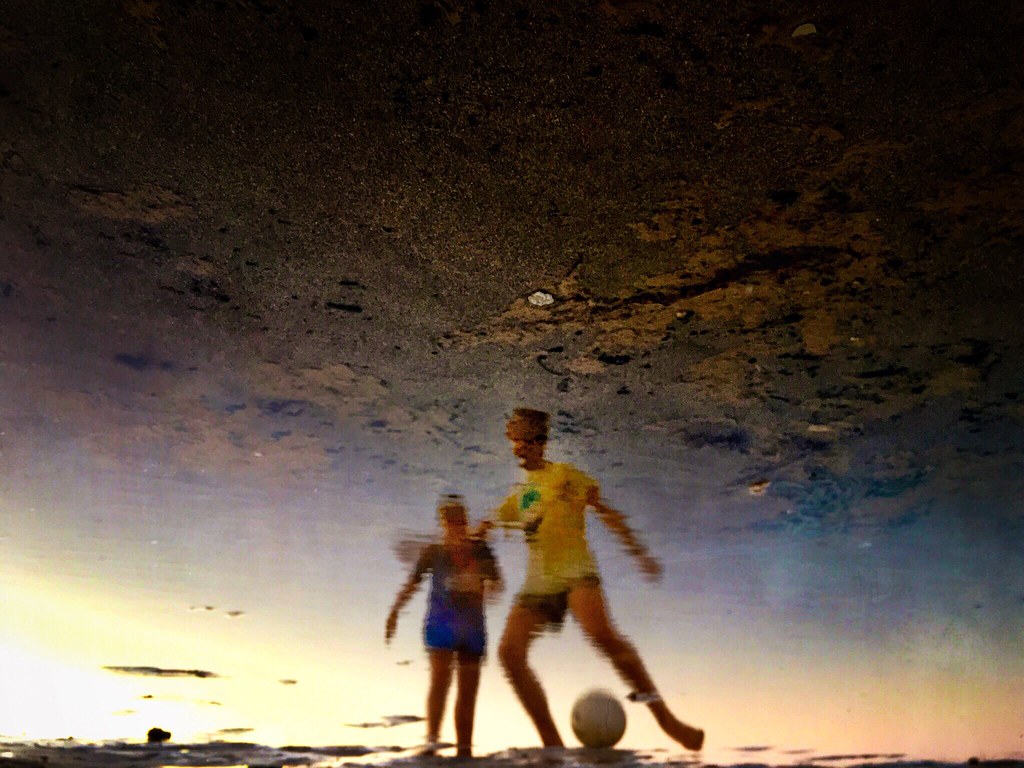 Apps used: This picture was shot on my iphone 6S Plus, and edited using Camera+ to make the upside down symmetry and clarity scene, Snapseed for general adjustments of light, contrast and ambiance, and Mextures for the final texture. Backstory: It was almost sunset on the beach, in Isla Canela, Ayamonte, in the south of Spain. I was walking along the shore, shooting pics. There was a small pool of sea water on the sand, and these kids were playing soccer on the edge of it. As I love upside down reflections, I kneeled down ando shot quite a few pictures while they were playing. This is the one I liked most.

Apps used: Taken with the native iPhone 6+ camera and edited in Snapseed.
Backstory: Portrait of my boxer dog Luka. 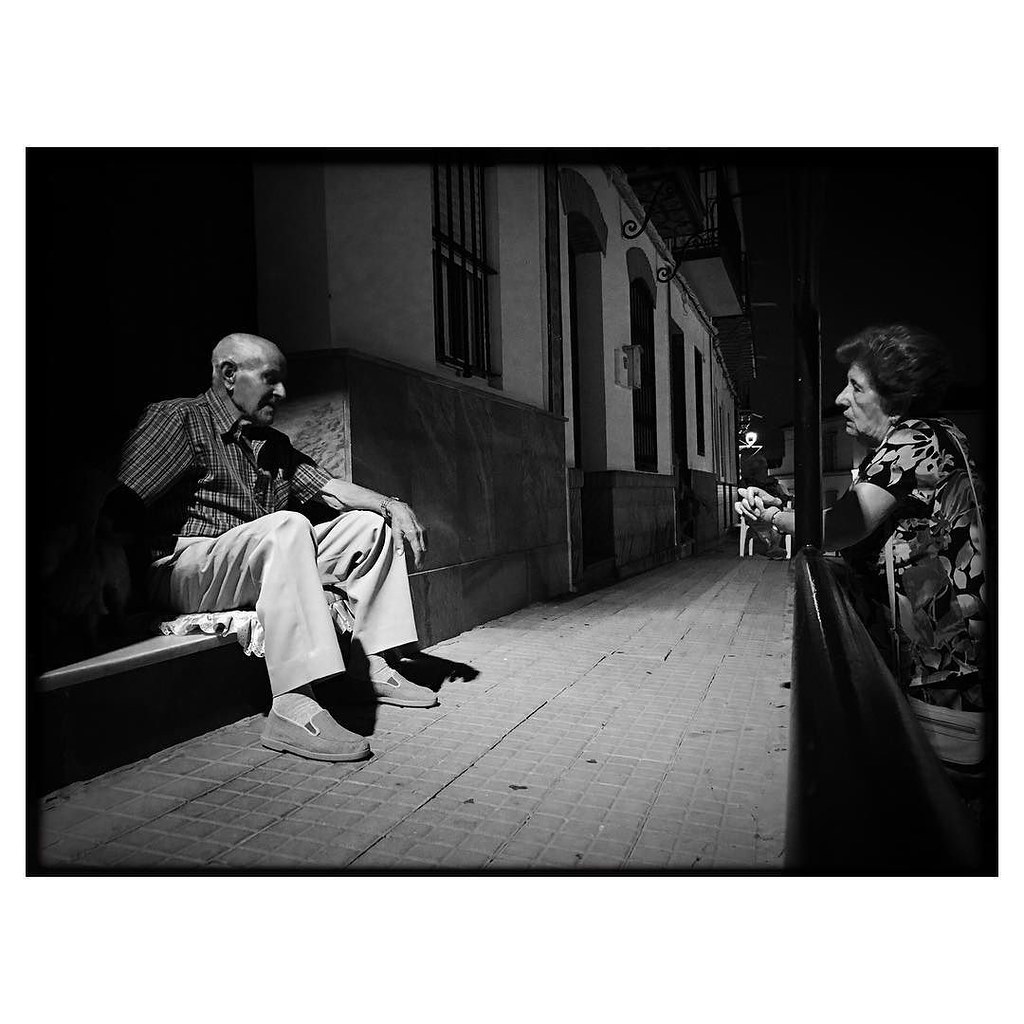 Apps used: #ShotOnIPhone6S #Hipstamatic300 (#Jane #BlacKeySuperGrain) Backstory: This picture was recently shot on my iPhone 6S Plus, using Hipstanaric (Jane lens & BlacKey SuperGrain film). No further editing done. This is a night shot in a small village near Sevilla, in the south of Spain. I was waiting to get some food when I saw these two old local people talking. I loved the scene, the man sitting on a doorjamb, lit only by a street lamp, and the woman in front of him. A very normal moment of an everyday’s life in a Spanish village, where everyone knows everyone. I approached and neither of them seemed to be aware of my presence. I shot several pics. This is the one I liked best. 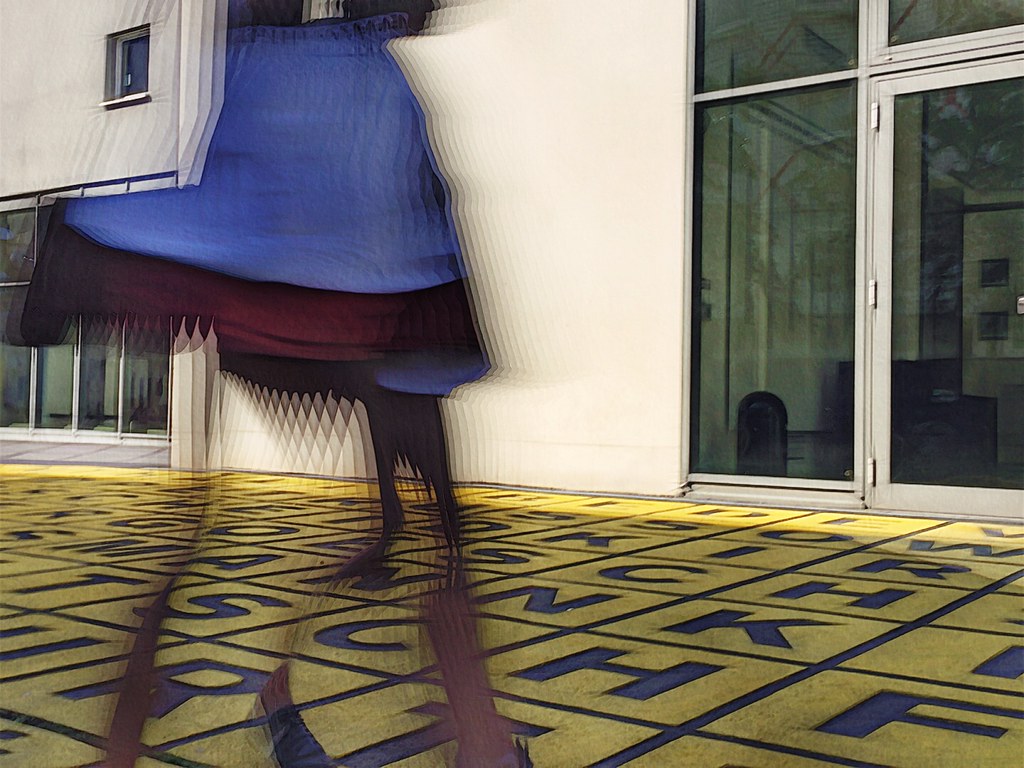 Apps used: Shot with SlowshutterCam with iPhone 6. Edited with Snapseed, iColorama and Photogene.
Backstory: I was waiting for friends to come out of the Berlinische Galerie Museum of Modern Art so I started photographing with the Slow Shutter app on iPhone6. I usually take many photos until I find the right quality of form and blur. This is a favorite place to photograph as the artwork on the ground by Kühn Malvezzi of a yellow alphabet on dark background always adds interest. I started general processing with Snapseed and then took the photo into IColorama for subtle changes using Style (coherence, lighten, water) and slight color change in Tone (LUTS). The end result is like a hyper-realistic painting with surreal overtones. I finished with the Photogene app to label and keyword, but also to make any slight changes like slightly burning part of the skirt. 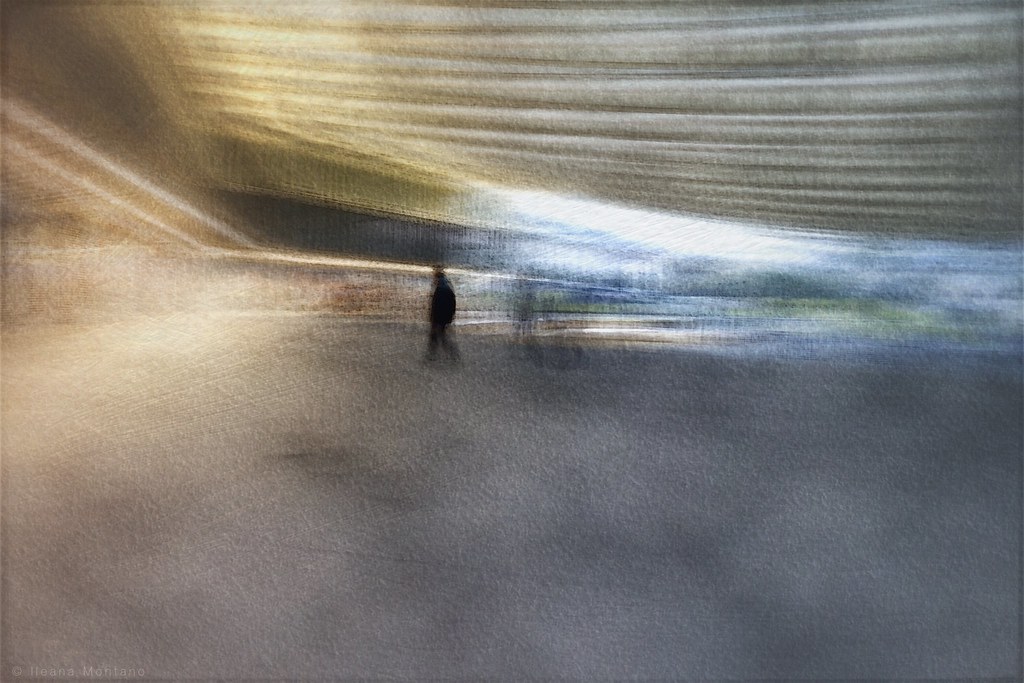 Apps used: iPhone 6 native camera, Snapseed, iColorama, Union, and Formulas.
Backstory: This is the first picture in an experimental series I am currently working on. This series focuses, as the title suggests , in the overall feeling and impression of experiencing old and new places from a different perspective, sparing the details to the maximum and enhancing the shapes, colors, movement and light. The human element is limited to only represent a presence that blends in the scene to bring spatial perspective. 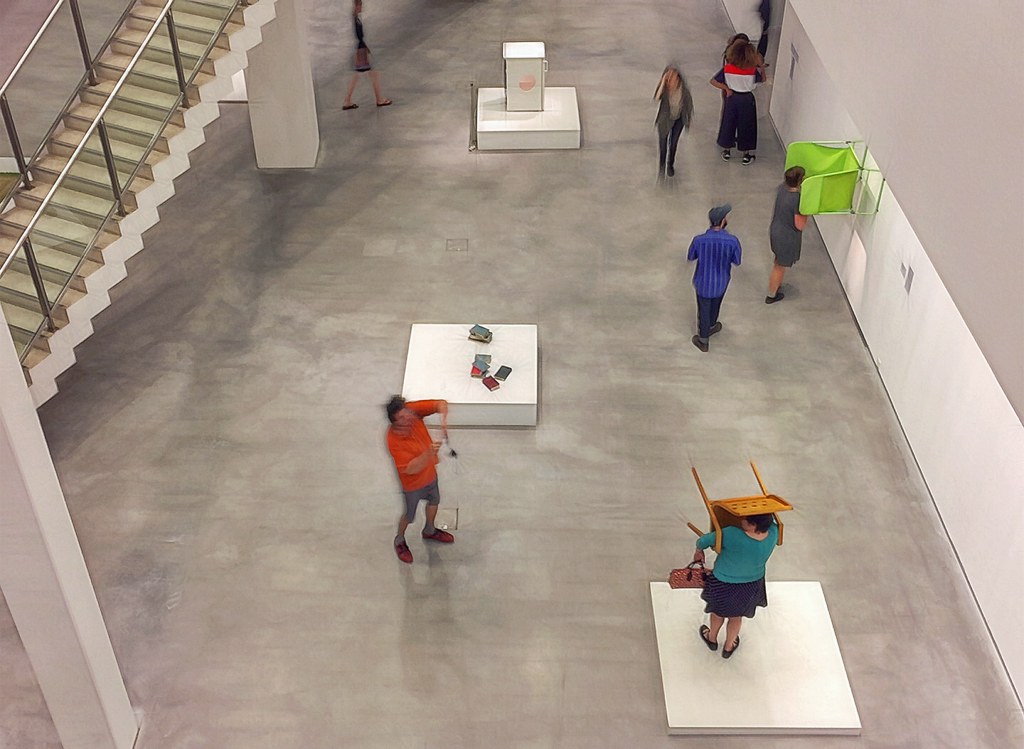 Apps used: Shot with SlowshutterCam with iPhone 6. Edited with Snapseed, iColorama and Photogene.
Backstory: This was taken at the Berlinische Galerie – Gallery for Berlin Modern art using the Slow Shutter app on iPhone6. It was a special exhibit by Erwin Wurm inviting the visitors to become “One Minute Sculptures”. I started general processing with Snapseed and finished in IColorama. I love to use IColorama for subtle post processing starting in Style (using coherence, lighten, water), and then slight color changes in Tone. The end result is something like a hyper-realistic painting which resembles a photograph. I finished with the Photogene app to label and keyword, but also to make any slight changes with curves, clarity, etc. 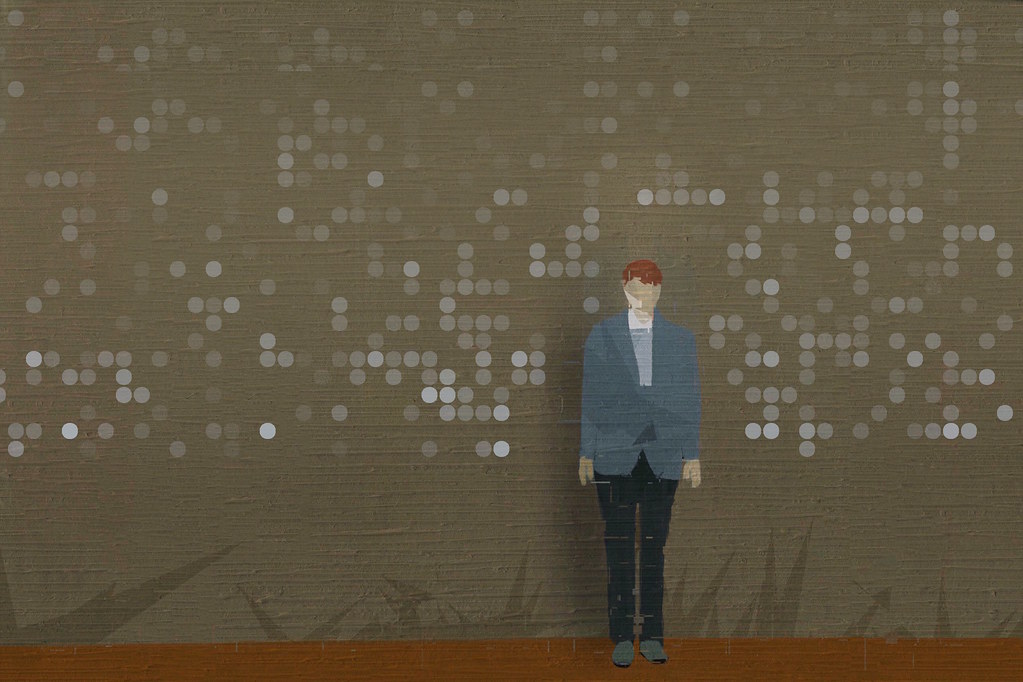 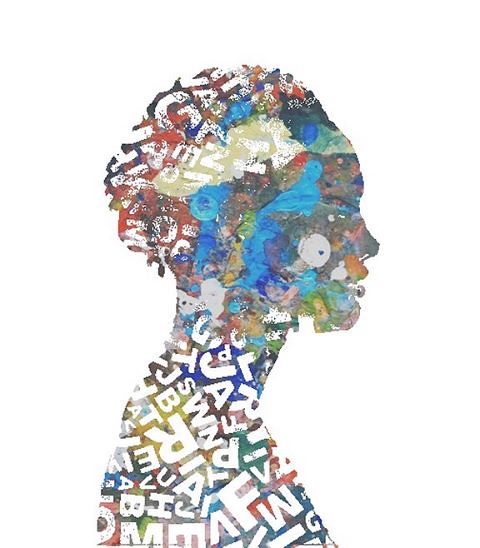 Apps used: Enlight
Backstory: Enlight is the only application I used for this piece. I haven’t used the app much, so was simply playing around with different settings and ended up with this finished work. I’ve been experimenting with Pop Art lately and trying apps I’ve purchased but rarely use. Very unusual for me to complete a piece using only one app, but this is one of those times. 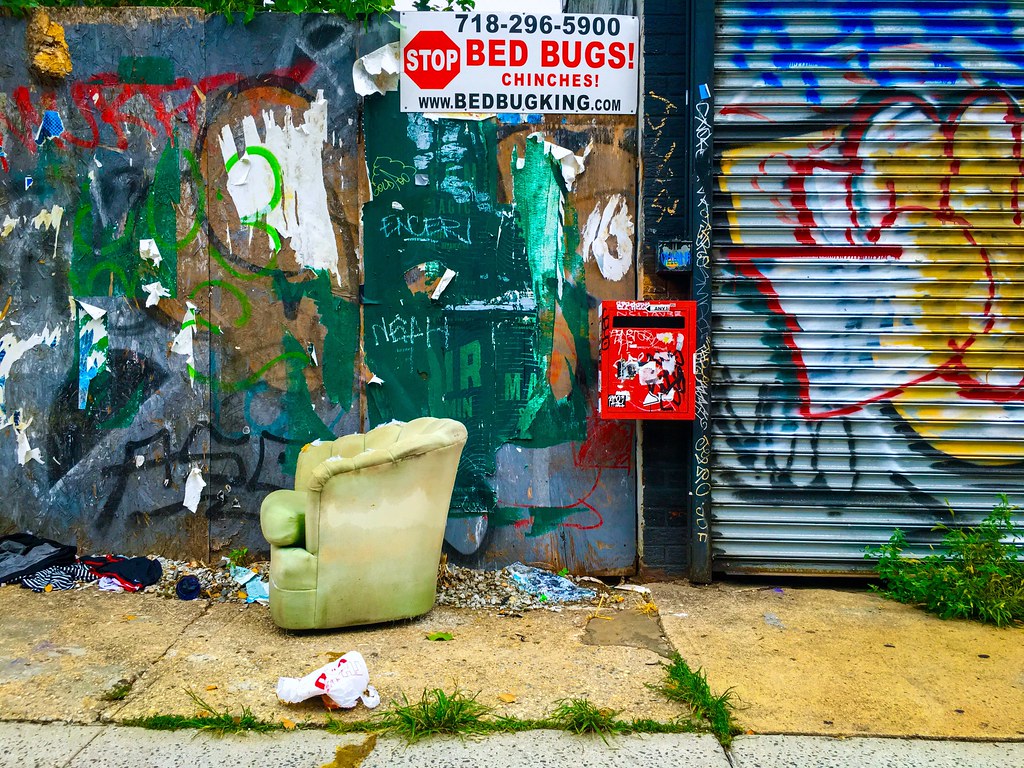 Apps used: The app I used for processing was Lightroom mobile.
Backstory: While walking down the street in Brooklyn, I saw a chair up ahead and thought there might be a photo opp. When I got to the chair and noticed the grungy yet colorful backdrop I started to frame up the shot. I took a couple [of shots] with and without the bed bug sign, and decided it somehow added to the image. 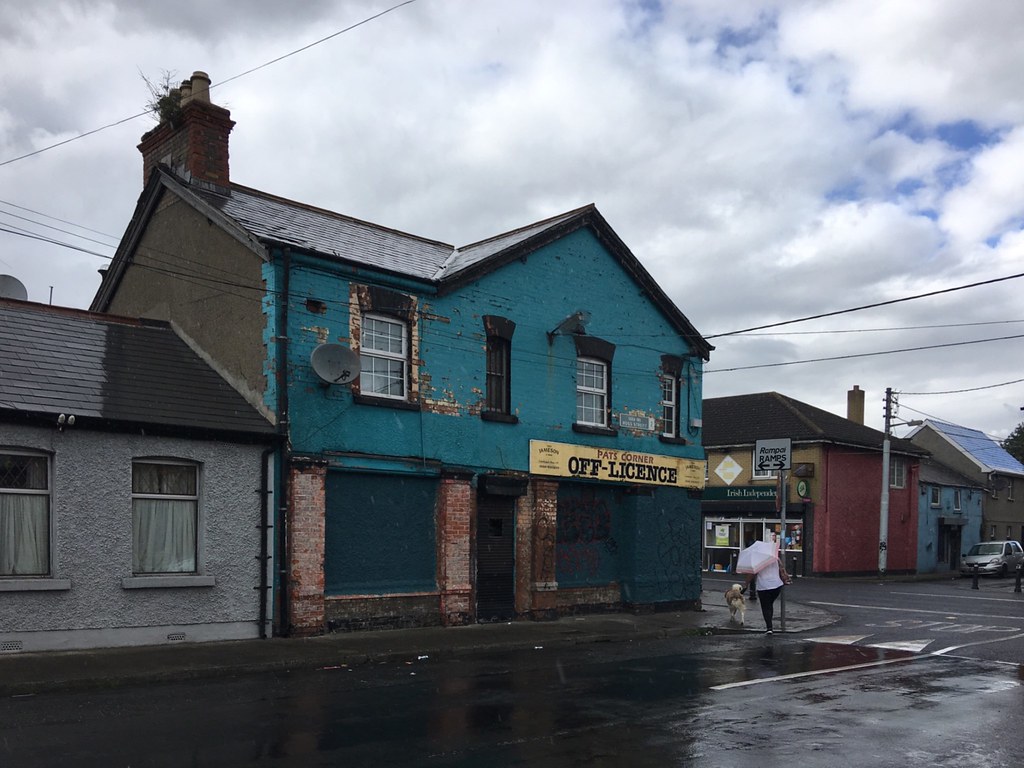 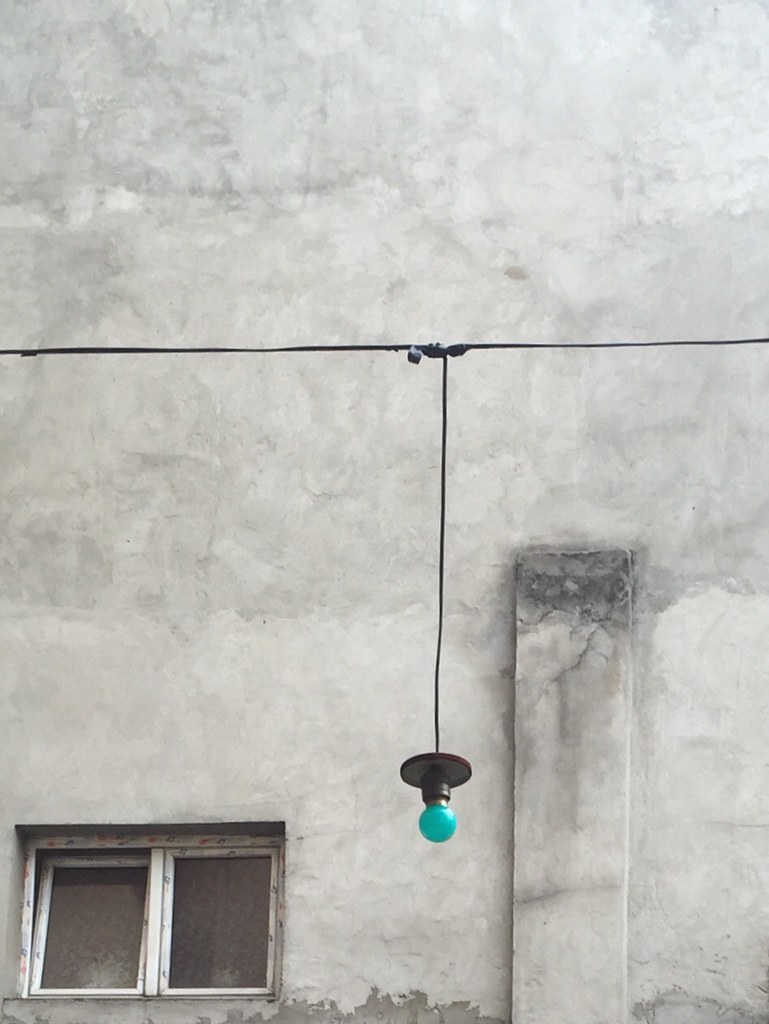 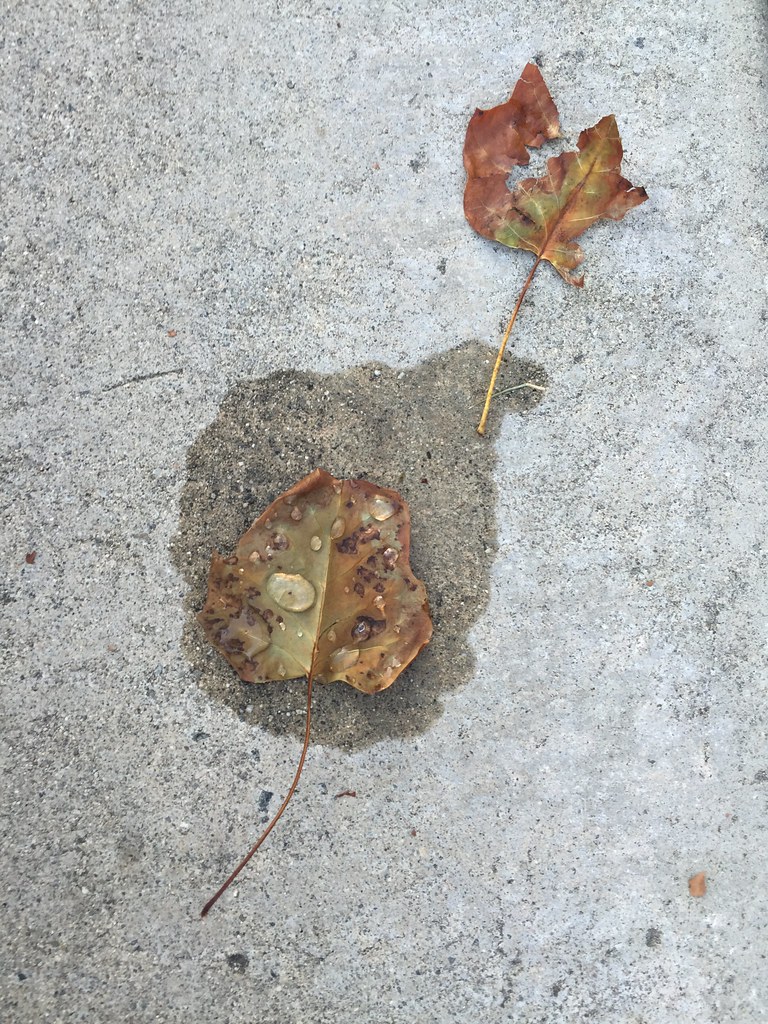 Apps used: This photo was taken with my iPhone6’s native camera, no other edits, no filters. Backstory: I happened to notice these leaves on the sidewalk one morning as I was walking to my car. At first I walked by them then I stopped and decided to get close and take a photo. Living in a concrete jungle, this photo was a reminder that we need to stop and truly appreciate nature more often. 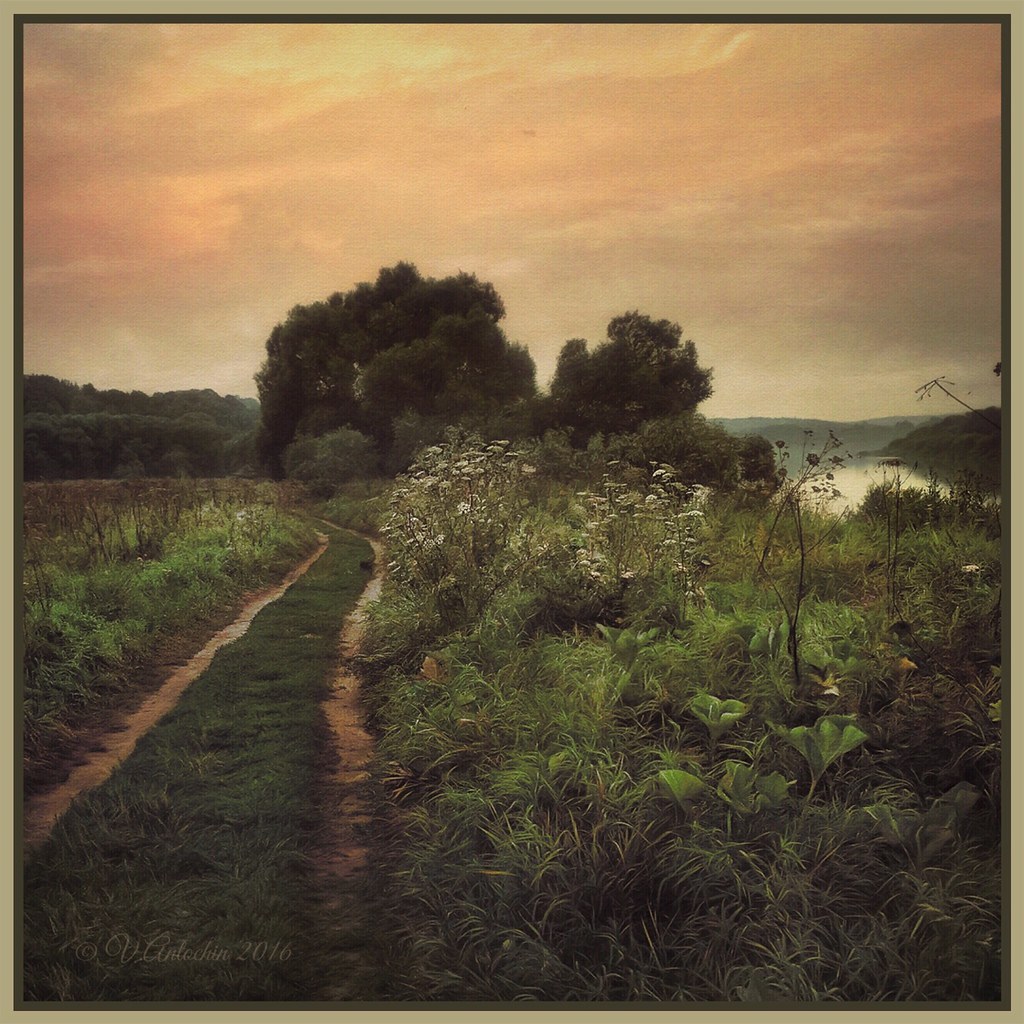 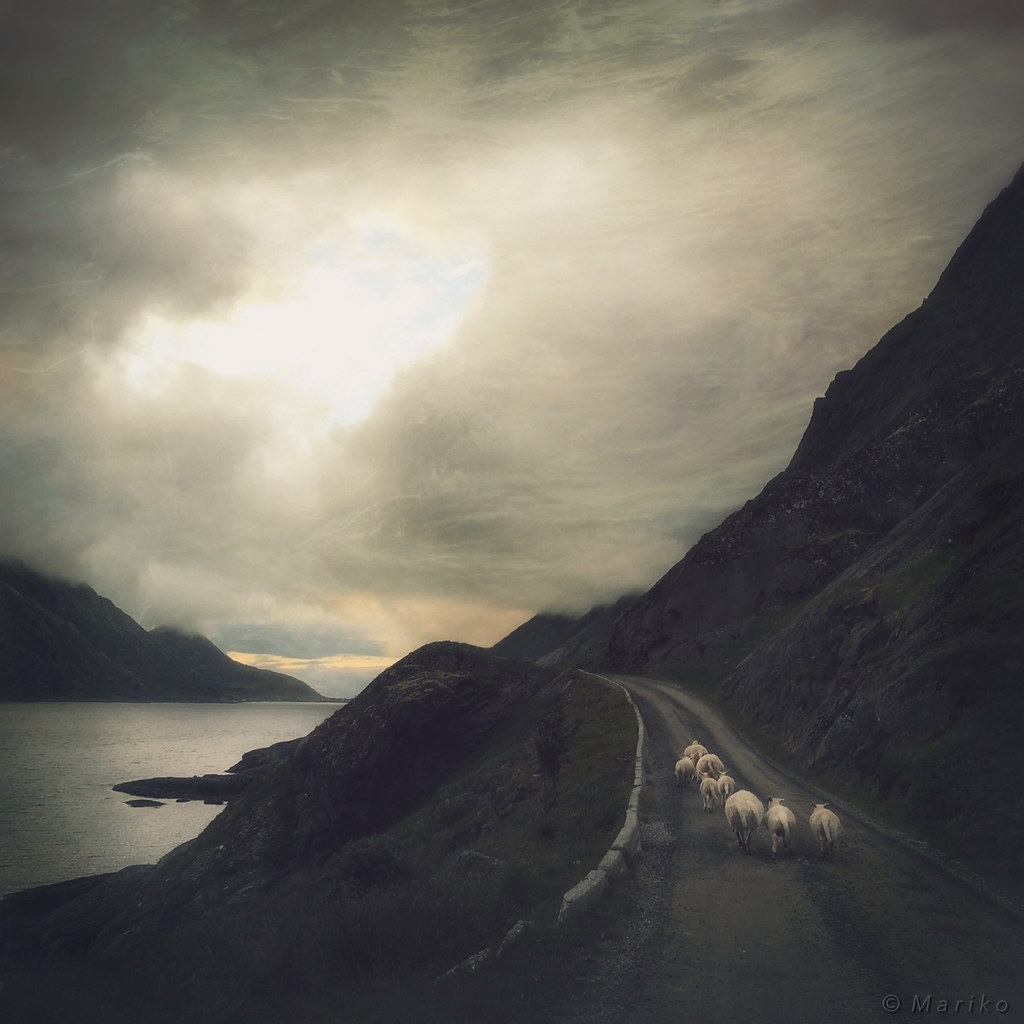 Backstory: This photo was taken on the Lofoten Islands in Norway. I was driving around when I saw these sheep resting beside the road. I stopped to take some close up photos but unfortunately, as soon as I got out of the car they began running away. Disappointed, I was watching them run up the road and took this shot. Reviewing the photo later I was quite happy how it turned out.