This week’s Apps Uncovered represents a selection of what I found to be the most compelling images for the week, across a wide range of styles and subjects – but with a bit of unifying theme.

So many great images are posted each week in our Flickr group that it is hard to limit the number to present. Sometimes, artists are “self-de-selecting” in that they don’t respond to a request for a listing of apps used (certainly their prerogative). We are still often left with the need to cull perfectly good images to leave a manageable number of what we subjectively consider to be the strongest.

Some weeks, the stand-out images just naturally seem to sort themselves into a category that’s cumulative in their impact – where the total becomes more than the sum of the parts. That’s certainly true this week, where the subject falling out of the selection process spoke about being far away from something – from a sense of self, from the world surrounding us, from the “other,” from a physical subject or an age (in years), from the very words we say, from an orientation and from a culture. Weeks like these are often especially fun, because they allow us to truly curate a selection of pieces that work well individually but also carry forward a theme and whose cumulative effect is hopefully more powerfully because of their message about the importance of community, and those moments of desired aloneness.

This week’s lead artwork, Kristie’s “There may be a great fire in our soul, yet no one ever comes to warm himself at it, and the passers-by see only a wisp of smoke. (Vincent van Gogh)” tells an eerie, even frightening story of distance from self and others. It represents a great starting point on our journey of exploration – where there are so many different kinds of “distance” – whether distance from or distance to.

There may be a great fire in our soul, yet no one ever comes to warm himself at it, and the passers-by see only a wisp of smoke. (Vincent van Gogh) by Kristie

Apps used and backstory: For this image, I used the self timer on my iPhone to shoot my portrait. First, I did the black & white edit, crop and rotation of the image in SNAPSEED. I then took the image into ICOLORAMA to create the painterly and smoke effects and I finished it off by bringing out the highlights of the light in my face and the smoke to make the image pop a bit, in PAINTFX

The Angel of the North, Gateshead, UK by Elaine Taylor

Apps used: Shot with ProCamera. Edited with TouchRetouch and Snapseed.

Backstory: The Angel of the North is a steel sculpture created by Anthony Gormley. It stands on the outskirts of Gateshead in the North East of England; the town I grew up in. Every time I go back visit family there, The Angel welcomes me home. I try stop there for a moment whenever I get the chance. I’m very fond of it. I was actually waiting to take a photo of my two boys with The Angel. As I waited for them to reach it, my eye was drawn to the silhouette of the man you see looking up at it in this image, so I took a couple of shots. He wasn’t the only person near it, but he really stood out. The editing process was relatively simple. I took the image into TouchRetouch to erase a few people to the left of the sculpture. Then I cropped the shot in Snapseed and made a few tuning adjustments. 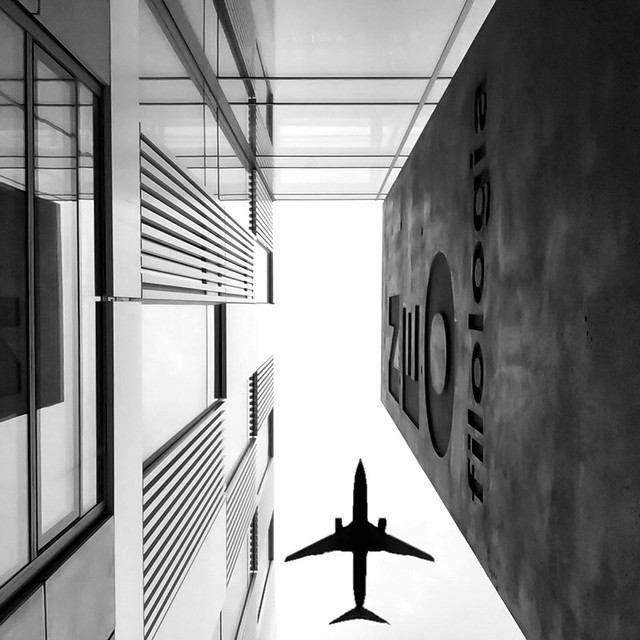 Backstory: I’m always documenting my children’s life with my Hipstamatic. My girl was taking a shower in the garden, it was a very hot day. I took some shots and I love this one very much because of the composition using the tree, its shadow and the water hose. I think it came out very well. I had the shots in my iPhone, didn’t upload any of them but one, and as I’m testing the new Hipstamatic app, I decided to play with this shot, and I loved the result. 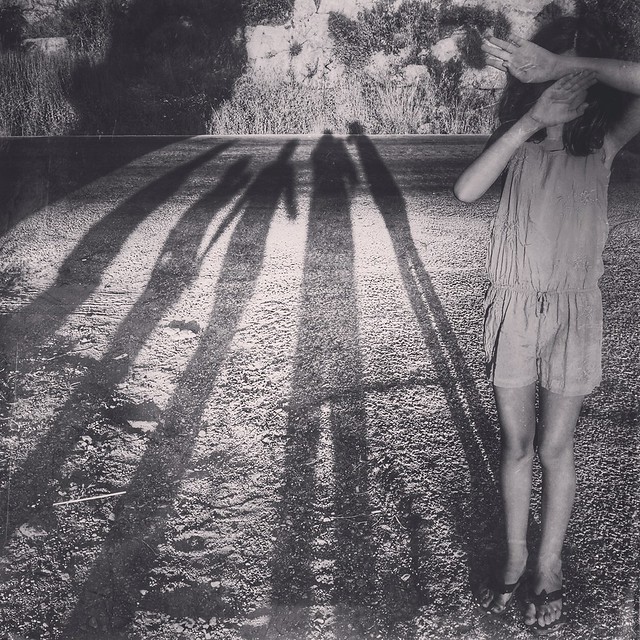 when the future haunts your past~ Lebanon by Mimo Khair

Backstory: The picture was taken at sunset in Lebanon when the sun throws very long shadows for the last 3 hours of the day. I took my daughter there so she can absorb my old home country and add it to her young memories, and perhaps the strong emotions of the place were too much to handle. 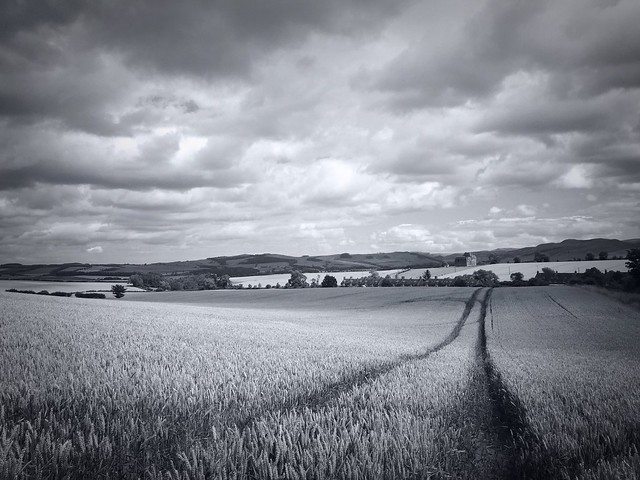 Backstory: I’d planned a trip to the Scottish Borders area (centering in the town of Kelso) in order to examine the many Historical remains of the region (Castles, Abbeys, Defensive Towers etc…) and took my first trip at the beginning of August. Whenever I plan such a trip I study small scale maps very very carefully, as they so often tip one off as to points of interest that you’d simply never come across without prior knowledge.

I found Cessford about 7 miles south of Kelso and resolved to go and study it. I made a full 360 degree reconnaissance of the structure and photographed it. As I was running low on available space (after a full day of shooting) on my iphone I transferred the Cessford files to my Leef iBridge to storage.

Upon my return home at the end of the trip I was dismayed to find that Id somehow erred and lost EVERY SINGLE FRAME of the shoot (and one other, from the same day)

I knew that I had to go back, and planned a second trip, 2 weeks later.

With the benefit of hindsight, I thought more and more about the way to present Cessford Castle. Its an interesting building in its own way, but its straight, square shape and relative lack of ‘romantic destruction’ led me to think that it would more lend itself to being presented ‘within the landscape’ – rather than being the direct and central subject of an image alone. This is a calculation I make with most Historical structures, as some are simply better seen ‘at distance’.

So, studying my maps further, consulting the beloved ‘LightTrac’ app and judging the best weather conditions and time of day to return to Cessford I finalized my plan for the location.

The weather held good, and the time of year I visited (late August) meant I had all of these wonderful ‘crop lines’ to use as leading lines. I walked far enough away from the castle until it gained a prominent position enough to show, yet distant enough to sit within its surroundings, and – to my mind – create a more interesting viewing experience for those prepared to give the picture more than a cursory glance.

Its 156 miles from Guiseley in Yorkshire (where I live) to Cessford – each way. So I travelled 624 miles to take this picture! 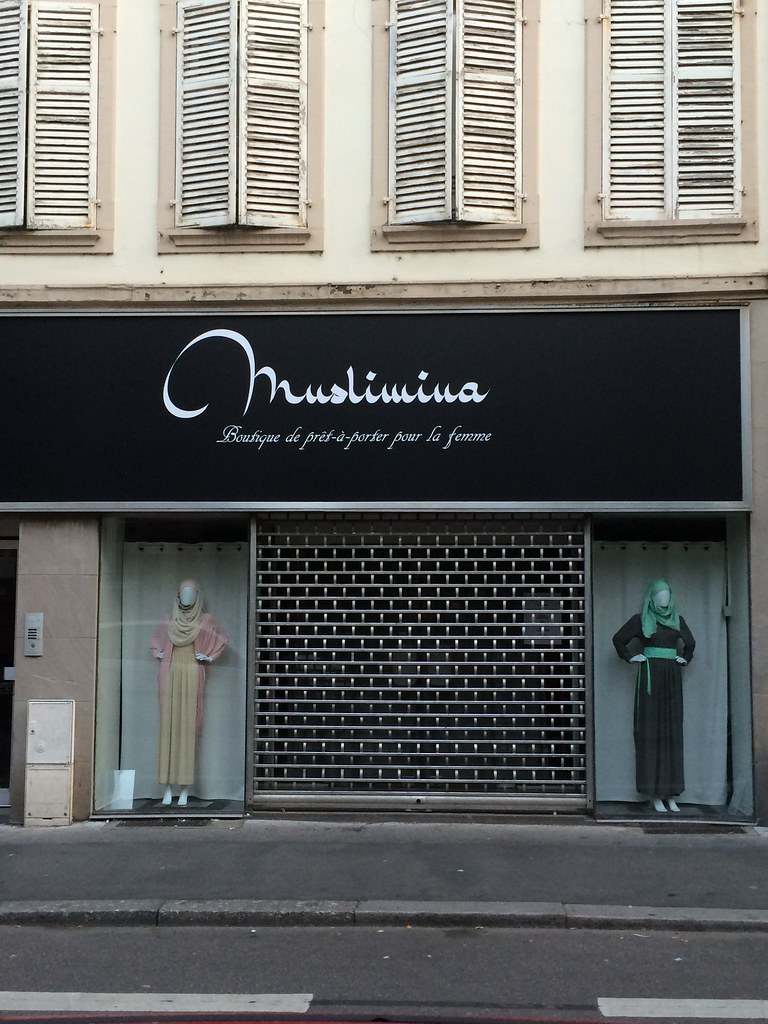 Backstory: I discovered this remarkable shop after having a really tasty indian dinner somewhere in the historic centre. It was late already and lighting conditions were baddish. 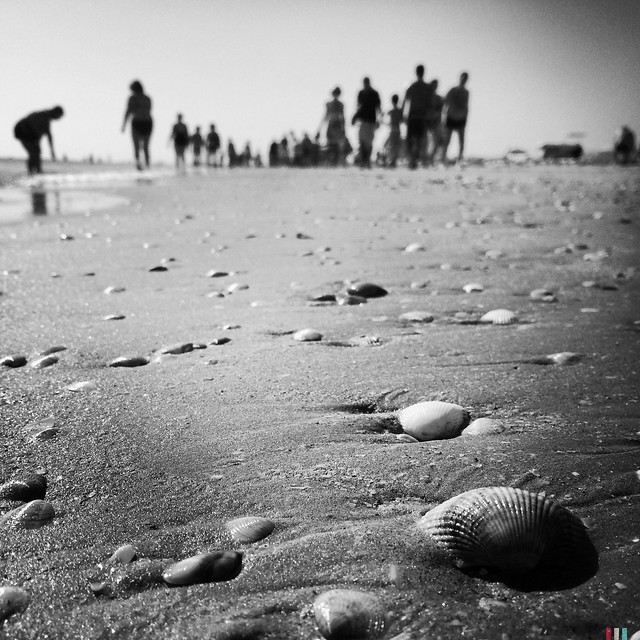 App used: Hipstamatic with Jane Lens and a custom Film i made a couple of years ago. The film is named TRI-X 400 Light Film. Basically it takes a scan of a real tri-x film and blends it with the shot.

Backstory: I was on the beach, i put the phone on the ground, taking the focus on the shell and waited for a interesting background. The shell was just a couple of inches away. The fullscreen shutter feature of Hipstamatic was very handy for this shot. 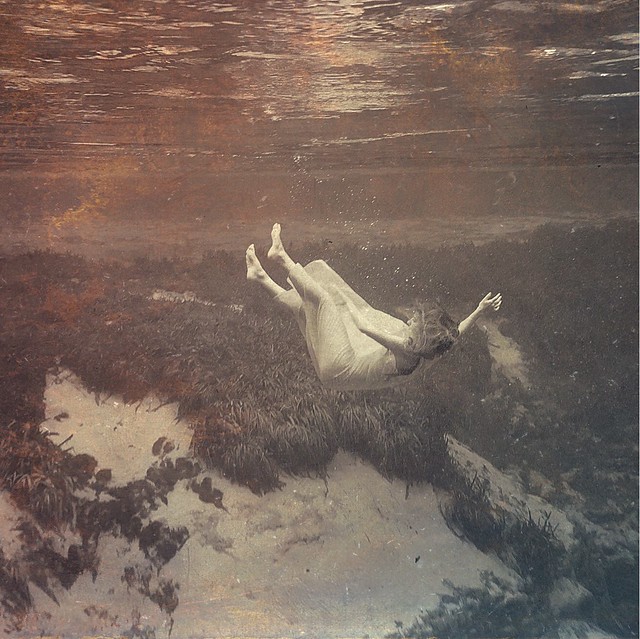 Perchance to dream by Jack Webb

Apps used and backstory: Model: Macy. This image was captured at Alexander Springs, in central Florida using a Watershot underwater housing for iPhone 6. Apple’s Camera app was used for the capture. Processing was done using FilterStorm Neue for straightening, cropping, and color adjustments. Two people were removed from the background using TouchRetouch. Texture overlays were applied in Stackables. Final adjustments were applied in FilterStorm. 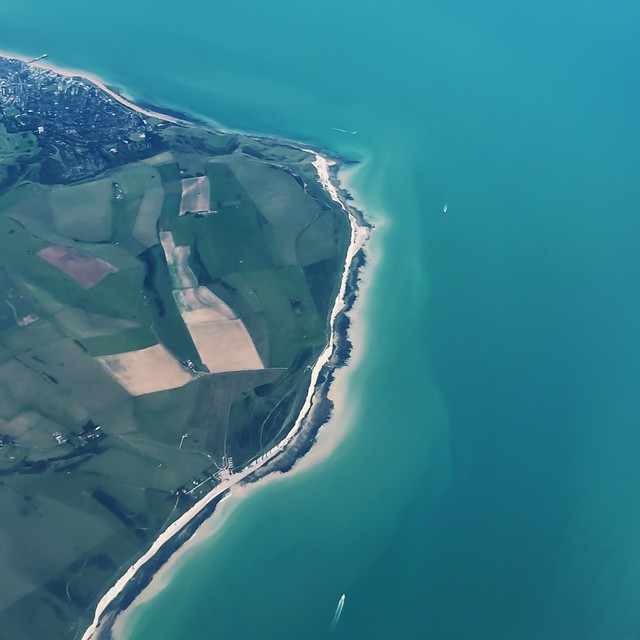 Backstory: I took this picture flying from UK to France. The weather was perfect, which is unusual, and the plane was flying pretty low. In the picture you can see Beachy Head – a chalk headland in the south coast of UK, one of the most notorious suicide spots in the world.

The White Cliffs of Dover are cliffs which form part of the English coastline facing the Strait of Dover and France. The cliffs are part of the North Downs formation. The cliff face, which reaches up to 350 feet (110 m), owes its striking façade to its composition of chalk accentuated by streaks of black flint.

The cliffs have great symbolic value in Britain because they face towards Continental Europe across the narrowest part of the English Channel, where invasions have historically threatened and against which the cliffs form a symbolic guard. Because crossing at Dover was the primary route to the continent before the advent of air travel, the white line of cliffs also formed the first or last sight of England for travellers. 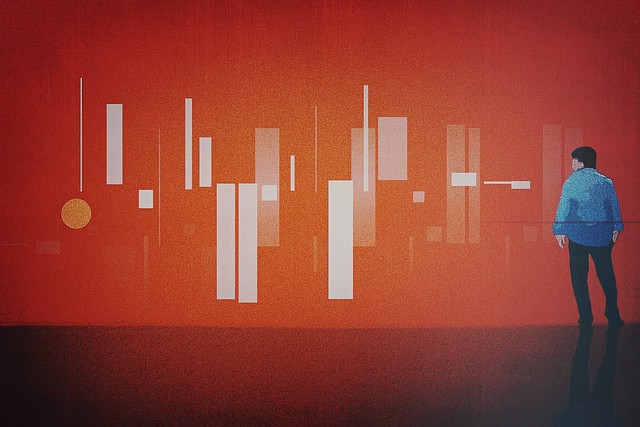 Backstory: You become a liar when you use words. Words always betray you. Words define and trivialize what you experience. Your own words and thoughts are almost a curse. Words conceal what you really feel in your heart. How are you free from it? 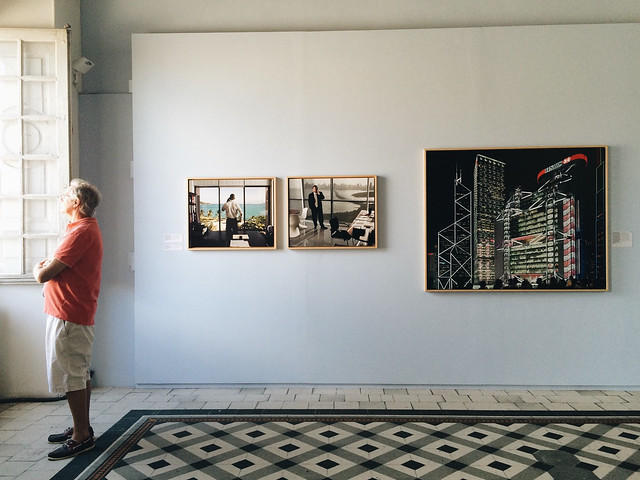 The Heavens by Occhio Privato

App used: Shot with the native iPhone 5S camera, processed with VSCOcam with A6 preset.

Backstory: The shot was taken at the “Rencontres d’Arles”, the international annual summer photography festival in Arles (www.rencontres-arles.com).
“The Heavens” is the interesting exhibition by Gabriele Galimberti and Paolo Wood (www.gabrielegalimberti.com/projects-2/the-heavens/).

I liked the connection between the business men at the windows in the pictures and the visitor looking thoughtfully out the window. 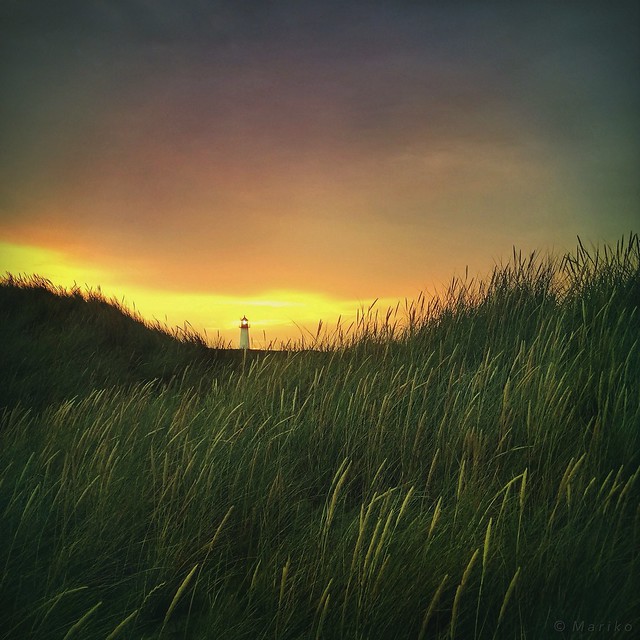 Sea of Grass by Mariko Klug

Apps used: The picture was taken with Hipastamatic (Jimmy lens/Blanko Freedom 13 film with effect flash on). With PhotoToaster I adjusted contrast, cropped it slightly, and lightened some areas of the grass in the foreground with the lighting brushes tool. In the next step I applied a filter in Mextures (Radience/Waterfront) and at last the PFX 5x filter in Picfx.

Backstory: This picture was taken on Sylt, the northernmost island of Germany. Although it was a cloudy morning I went out very early to the lighthouse in the hope to see the sunrise. And it was worth it because all of a sudden the sunlight came through a gap in the clouds and created a very special atmosphere. I called this picture ‘Sea of Grass’ because the seagrass on the hills looked like waves of the ocean. 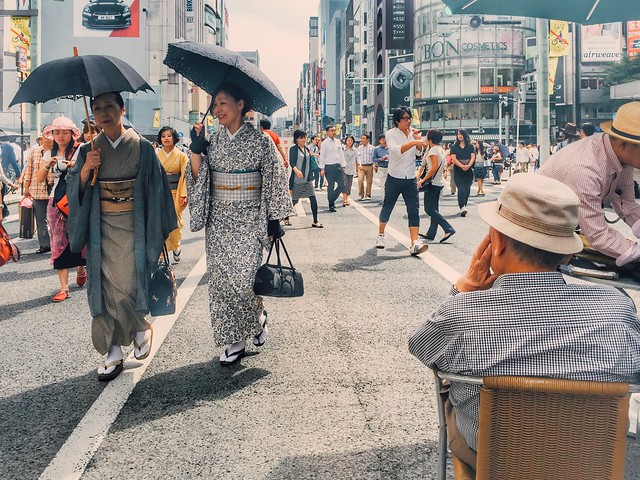 Japanese culture in Ginza by ARCH

App used: iPhone 6 and processed with VSCOcam with e4 preset

Backstory: I took this photo in the gallery of the Public Library in Porto after attending the opening of a big exhibition of artists – photography, painting, sculpture, performance, video, etc – all under 40 years old (the title of the exhibition was “Sub-40”)When I was going out I noticed two women walking in a corridor and the framework of the white floor and the darker tones of the wall and door caught my attention. I followed these women some minutes taking other photos and at the same time I imagined mysterious stories about them. All of the stories had an happy ending!