I’m the guest selector for Apps Uncovered again this week while Nicki and Bob catch up on emails, courses and sleep. It’s all gone crazy here at IPC Towers!

This week’s lead image is Waterfront by Michael M White. The composition is excellent, in particular the yellow circle which holds the composition in place. The colours are well balanced with the vibrant green attracting both the viewers and the subjects attention. Michael has clearly thought about the man’s dark shadow, without which he would be falling out of shot and the balance would be lost.

Lord Nelson by auketts is a lovely vibrant photo of a South London pub that I recognised immediately, it stands in front of a drab housing estate, auketts has used the woman and the bikes in the foreground to ground the composition and left enough of the building behind the pub to give context and balance.

I could go through all of Jun Yamaguchi’s 1900 images on Flickr and fave them all. Jun is one of my favourite artists. ‘Dummy’ is a superb image; the positioning of the dot (a feature of all Jun’s art) really holds the image together.

Finally a mention for ‘Not Your Typical Front Yard’ by Ross Mannion. Well done Ross for capturing the scary guard cows! The colour of the door tells me the cows are protecting the house, I shan’t be knocking there!

Nicki will be back curating next week’s 12 images but for now, I hope you enjoy my selection and thanks for submitting your images to iPhoneographyCentral. 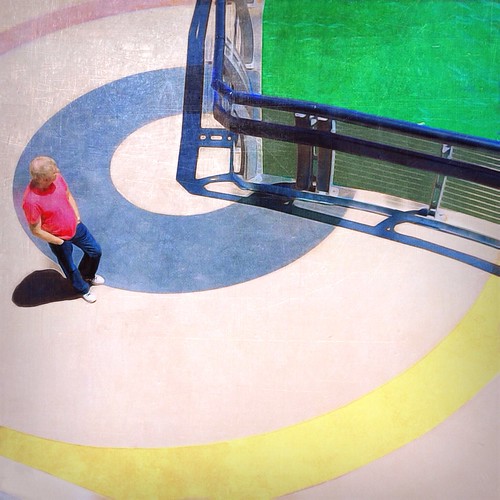 This image was a happy accident. My aim was to capture multiple pics for a panorama. The panorama was a bust, but this guy saved the day by entering camera left. Though I might have forgotten some steps, this was my main process;

– Using Palette tool, modify colours. The inner semi-circle was originally gray, the foreground arc was beige, the water in the upper right was not as green, After each single modification..
Save
Exit Brushstroke when satisfied

3. Juxtaposer
– Import most promising saved pic as Juxtaposer’s top layer and one of the saturated saves as the background layer.
– Use Soft Brush and Erase to reveal saturated colours as needed.
Save & Repeat until satisfied.

4. Import into TouchRetouch
– Clean up some distracting elements
Save

5. Import into AlienSky. Yes, AlienSky! The app has a Metal Filter I like.
Save

6. I really wanted a panorama…. 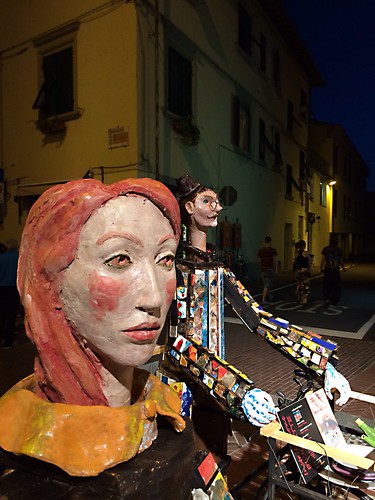 Montecupo by night by PhotoGraphic

Ceramics sculputres exhibited in the main street of the little town of montelupo, during a special weekend dedicated to the art of ceramic. Majolica has been produced in the Montelupo area since the Middle Ages. The town of Montelupo is situated on the banks of the river Arno and is rich in clay, the principal material needed to make these ceramics. 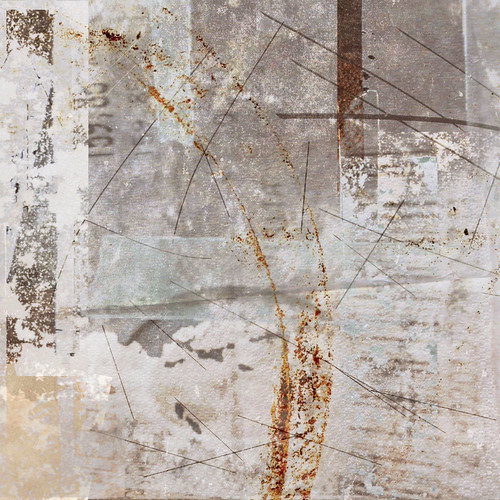 Apps Used: Camera+ – HalfTone – ArtStudio – Superimpose.
The inspiration are works of mixed media, which, along with the collage are the techniques that are most fascinating to me at this time.
For this work I photographed a receipt, electrical tape and strips of paper, a Halftone texture.
On Artstudio I tried to reproduce the scratches on two different images and with different brushes.
I switched to Superimpose for composition, layering, rotating, and dosing the transparency of the various components.
I preferred this version because there seems to be an urban landscape. 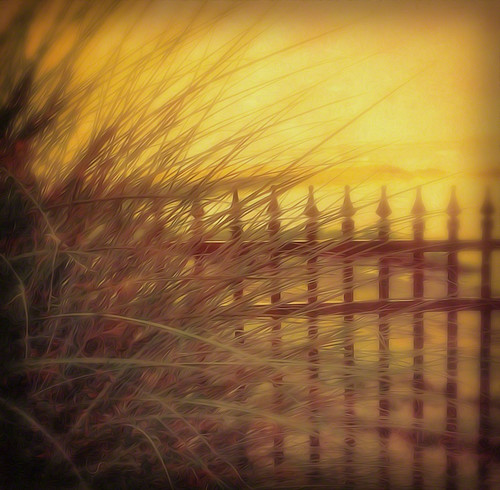 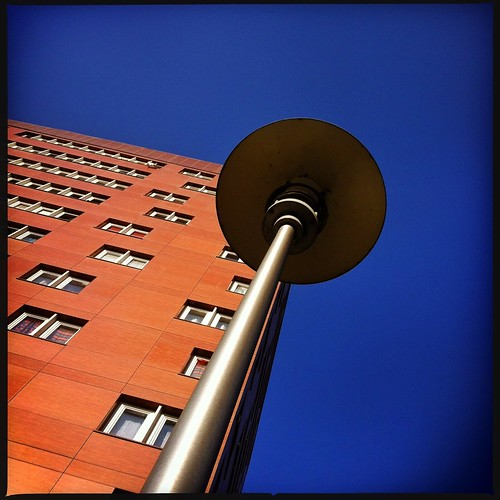 Taken while walking in the French District of St.Charles, MO.
I was intrigued by the antique store front and the female mannequin with the country dress. The scene was reminiscent of a photo by Atget. I took several standard shots. Then the wind briefly caught the folds of the dress and gave the image a surreal tone; it was as if a hint of life had been introduced amidst the emotionless stolidity of the other discards. That was the instant I wanted to complete the picture. 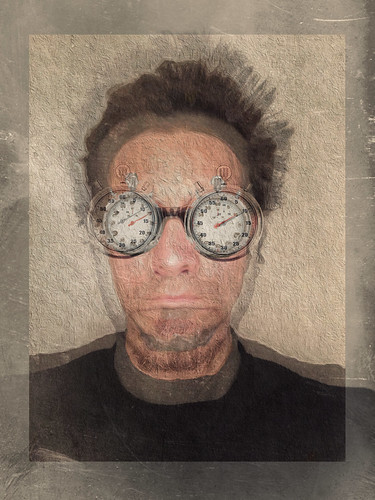 Trapped in Time by petyrc

Back Story: This image was created as a fortunate by-product of another project I’ve been working that deals with “plays on words”. I had recently taken some self portraits and thought I could incorporate along with stop watch to create an image around the homonym “watch”. I played with the portrait and the watch element but didn’t like anything. This image was originally a throw away but some people had commented on it and I decided to keep it.

Step to creating the image were pretty easy.
1. Took self portrait image and stop watch image into Superimpose and masked the stop watch over my eyes.
2. Took output of Superimpose image into MonoVu and used filter “mono #27”.
3. Took the output of the Superimpose image into Glaze and used the second filter.
4. Took the outputs from MonoVu and Glaze and took them back into Superimpose
5. Place MonoVu image as the base and superimposed the Glaze image on top with a blend mode of Overlay
6. Reduced the size of the Glaze image over the MonoVu image and lined up the stop watches on top of one another as best I could.
7. Save. 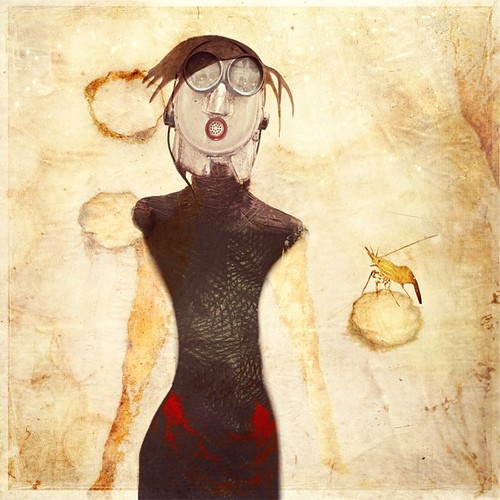 Enjoying The View by pamelaviola

Enjoying The View
Backstory: In the past month I have traveled to New York City, Vancouver, Boston and various places in Alaska. Usually when I create a composite all of the elements come from one location. Not this one. The images used represent all the aforementioned locations except Boston, though that’s where it was created and titled (by my brother-in-law).
I made these photographs with an iPhone 5s using ProCamera and Hipstamatic. The apps I use most frequently are Leonardo, iColorama, SnapSeed, Procreate, Repix, and recently, Alayer. Most of the time I start with a blank background and build my images. Here I started with a very subtle texture, the only evidence of which is the slightly lighter edges. In Leonard I placed the ochre texture with circles on top and played with the opacity and blend modes.
Next, I needed to decide who my character would be. Still in Leonardo I placed a profile image of a woman’s gown that I made in a shop in New York. I didn’t want a profile so I used the perspective controls in Leonardo to loosely pull the black fabric into my desired shape and did some masking. I realized that part of the background (the darker elongated form on the left in the image) could function as an arm. I duplicated the background layer, flipped it, changed the size and opacity slightly and masked everything except the “arm” to use on the other side of her body.
My girl needed a head. Part of a metal piece I came across in Alaska would work. Masking, duplicating and blend mode gave me the tone I was looking for. I then took the image into Procreate to add the red lips and splash on her dress, and the pale blue on the rim of her “goggles”.
Back in Leonardo, she needed a companion. After a lot of masking the little “sea monster” worked just fine. Next, something for her head, hair or a hat. A resized moose antler with some color alteration gave her an edgy, hip look.
The overall tone of the piece wasn’t quite right. Sometimes with elements from many different places, shot in different lighting conditions, you need a unifying color and/or texture treatment to bring everything together. I took the image into Alayer and experimented with different effects and textures to create a consistent overall look. The background felt slightly flat to me so I tried putting a faint skyline behind my girl’s shoulders, but felt it looked too heavy so I added some very light stars at the top in Repix instead. She is strong enough to stand on her own.
Finally, since I was visiting my sister and her husband I asked my brother-in-law what he would title it. “Enjoying the View”. Sounds good to me. 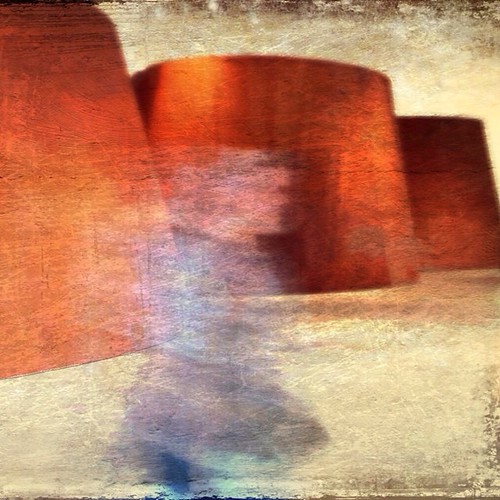 Backstory: I’ve been experimenting with slow shutter to get just the right amount of blur to indicate movement using a Joby micro tripod to keep the background in focus. This was handheld but I braced myself against a wall in the Richard Serra exhibit of Corten curved walls at the LACMA museum. I always start general processing and cropping on the iPad in Snapseed. This was followed by iColorama using the bound brush and finished off in Distressed FX using Lily and Edgy. I often use Edgy without anything else. It gives a whitish texture that helps to convey the ephemeral quality of the movement of the person. The title is a matter of interpretation–the finished work should facilitate the viewer’s imagination. 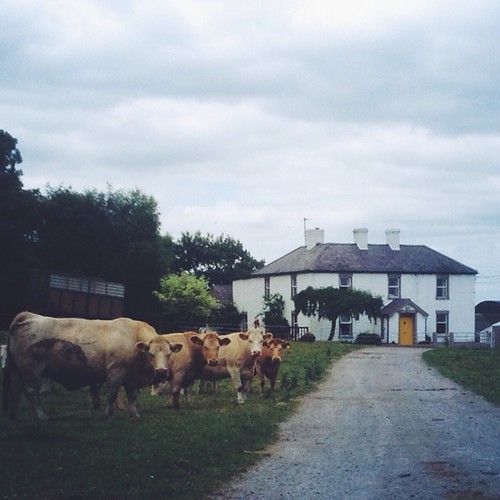 Not Your Typical Front Yard. Tullamore, Ireland by Ross Mannion

This is a farm house I pass regularly. When I saw the cows (one of my favourite things to shoot) in the front yard this day I had to stop the car. The house itself is not a strong enough subject but with the cows there was potential. As curious as cows are, once they saw me they all lifted their heads to see what was going on. The way these 4 were standing was absolutely perfect, almost like I positioned them that way. Definitely got lucky with it as this is what made the shot for me.

Apps used were Filterstorm Neue to crop and scale. I brought it into VSCO where I used the F2 filter and tinkered a little with exposure and saturation. That was pretty much it for this image. 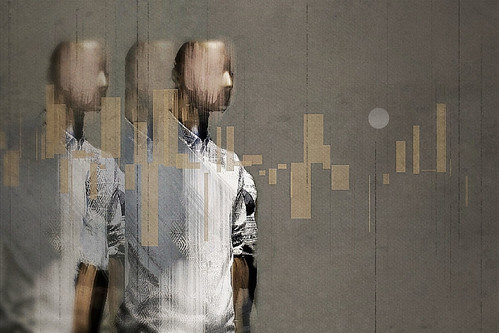 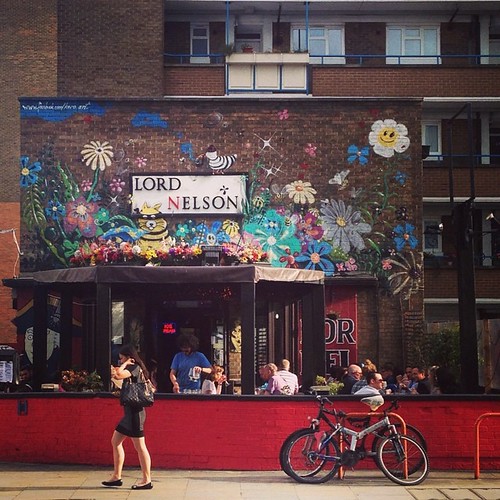