Welcome to this week’s Apps Uncovered where we feature a range of iPhoneography talent and reveal the creativity and techniques behind each of the iPhone images featured. We are making a small change which I have posted at the end of this paragraph. Please take care to read this as we think it make a really positive difference to this weekly feature. This week we have some superb macro shots with the Bearded White Flower by MometsForZen scooping the top place. We love to see the creative capabilities of our idevices and this week is no exception with more stunning close-up work from Broo_am (Andy B’s) Petal tears, a surreal portrait by Michal Koralewski and a beautiful black and white moment caught, Jennifer Bracewell’s “Balboa Park”. I hope you enjoy this week’s magnificent dozen.

This is how we will do it: We will still be shortlisting 12 artists in the usual way with a “Congratulations message” and you will be asked to supply the apps and/or a backstory by the Thursday of that week. If the Apps and/or backstory are not received by the Thursday deadline, we will pick another artist’s image where the apps and backstory have already been posted on Flickr (either in the description, tags or emailed directly to Bob Weil or Nicki FitzGerald via Flickr). Therefore it is wise to post your Apps and backstory everytime you post to iPhoneographyCentral’s Flickr group. We are sorry to have to be so strict about this but we would like Apps Uncovered to be “what it says on the tin” and get back to being not just a spectacular showcase for mobile art but including a glimpse into the creativity and techniques behind each of the images. If we are not revealing the apps and stories behind the images, then we are not being true to the point of of this particular feature. Thank you all for contributing your wonderful images and we look forward to discovering the stories and techniques behind them. If you have any questions regarding this, please email me nicki@iPhoneographyCentral.com 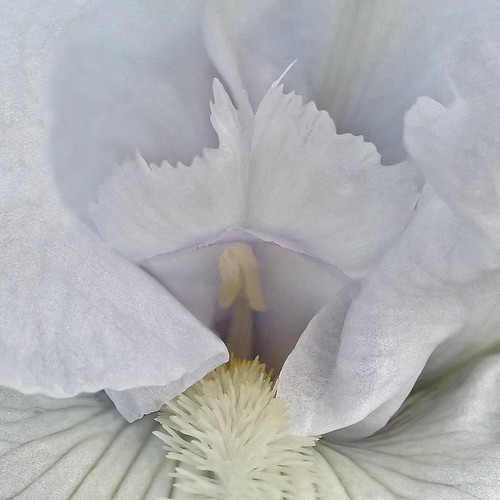 A surprising and lovely view revealed itself when I peered into the ruffles of the petals on this bearded Iris flower.

Phone 5 – Photograph taken with the camera on an iPhone 5.
Camera – The native Camera app was used without the HDR option.
Handy Photo – The retouching tool was used to paint over some small specks of dust on the petals.
Filterstorm – Used the Clone and Blur tools to finish off the job of retouching.
Snapseed – Applied a small rotation to the image.
PhotoShop Touch – Image cropped to square format and resized to 2448 x 2448 pixels.
Snapseed – Structure and Ambience filters applied. Overall lighting adjustments carried out.
PhotoShop Express – Noise reduction filter applied.
Snapseed – Sharpening filter applied.
Frontview – A trapezoidal crop was applied to alter the apparent perspective.
ExifEditor – EXIF data from the original photograph transferred to the final image. 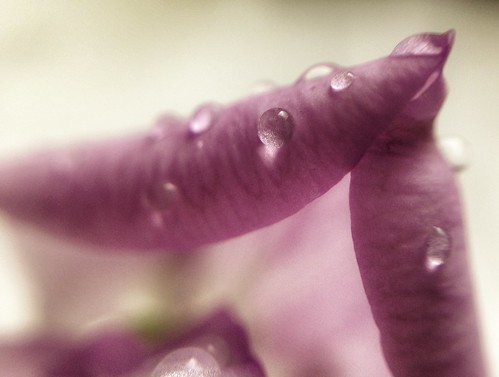 Petal tears by Broo_am (Andy B)

Backstory/Apps: iPhone macro of beautiful snap pea petal after the down pour. Bokeh on white.
Apps used: Lightbox. Taking the pic required a very steady hand. The pic is part of the petal series. 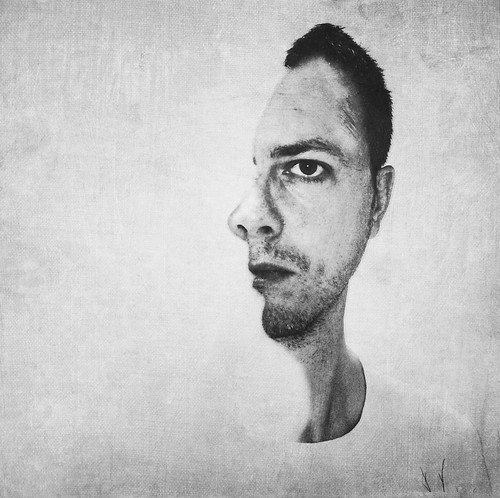 Backstory/Apps: This was taken at Balboa Park in San Diego. My sons and I were trying to decide which museums to see and I looked over and saw my little girl looking perfectly bored, sitting in an old archway. I snapped the shot with hipstamatic, lucifer lens and blackkeys xf film. I used snapseed to straighten it a bit and added tilt shift and adjusted the brightness and contrast. 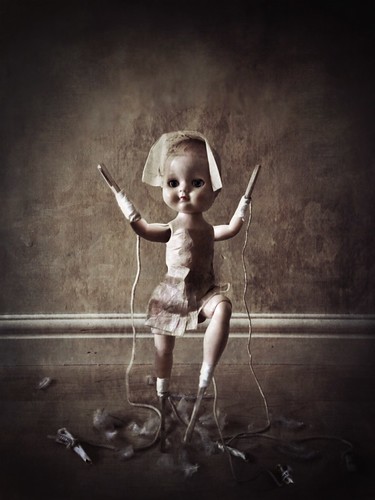 Backstory/Apps: Creating Eventyr was one of the more complex pieces I have done as the doll I based her on does not have the flexibility I wanted to portray. I therefore ended up with the piece being almost entirely composite with every part being created and added to the final image. Her clothes and bonnet were created using the paper from tea bags ( string type) and the bandages from tissue paper. The finger bones were made using chicken bones.

The image was put together using Juxtaposer using the individual images taken of all the parts, it’s for tasks like this that the stamp function in Juxtaposer really helps. I then used Snapseed ( drama filter and selective adjust) to balance out the image so it didn’t look constructed.

Iris Photo suite was the used to add aging and grunge. The piece was then put through the grunge filter in Snapseed and the outcome blended back with the raw piece using Blender. selective adjustments were made in Snapseed and Pictureshow.

Apps used: Juxtaposer, Snapseed, Pictureshow, Iris Photo Suite. Hipstamatic ( Tinto 1848 and C-Type Plate) were used for the Sketch. BlurFx, Glaze and Leonardo were also used for In Livia’s Hand. LoMob, Phonto,Labelbox and Scratchcam were used for the Typewriter remix. 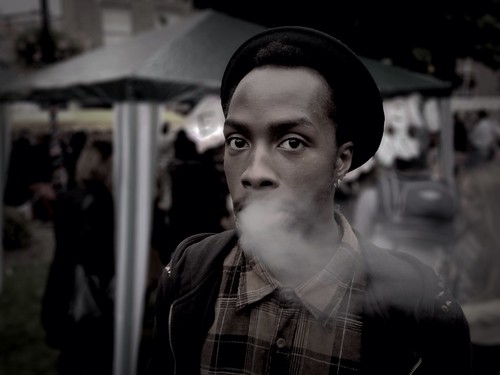 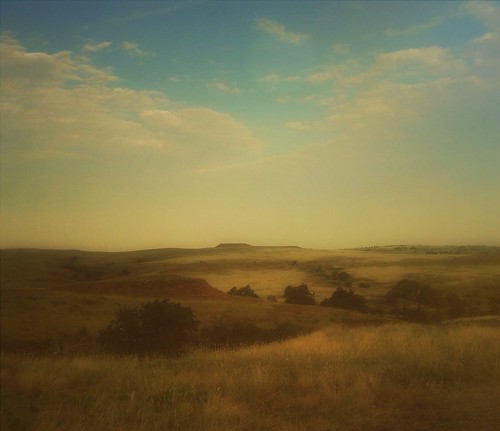 Backstory/Apps: These are the Gypsum Hills near Medicine Lodge Kansas. An unexpected and unusual landscape in an otherwise flat area. It’s mostly open range . Which means that sometimes you have to honk your horn to move cows out of the way. Apps used were Snapseed , vsco cam , Mextures and Blend 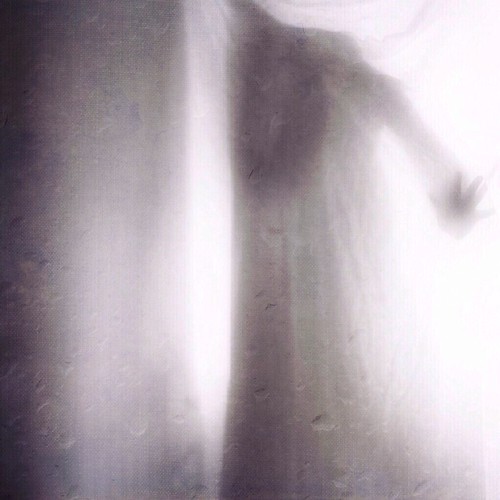 “Whispers of Souls : Form makes it tangible from the abstract by michmutters

Art is a step from what is obvious and well-known toward what is arcane and concealed.

Backstory/Apps used: The image was taken with 6×6 camera and the only apps used were DynamicLight and Snapseed.

The flower was standing in front of a colored window with a lot of backlight. The original image already possessed a very nice color and softness so I had very little to do to finish this image. 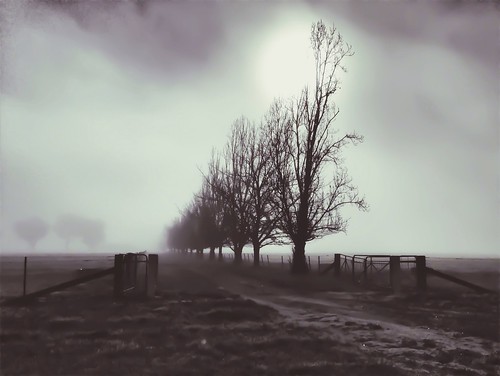 At the farm gate by Paul Lambert

I edited colour contrast and cropped in Snapseed. I also made some noise correction in PS Express. 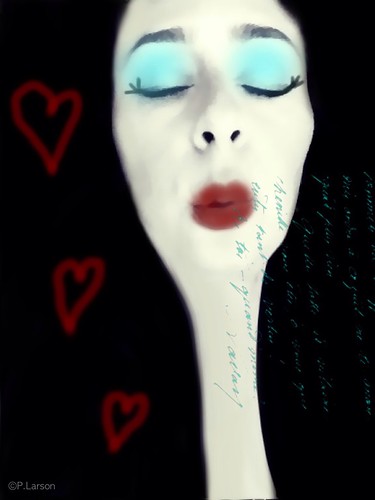 This photo is part of a series called Just Me, in this series let you see a bit of myself. I consider myself very dreamy and this is what the picture says.

Apps used: Elasticam for the neck extension, then Sketch Club to paint the image, iColorama to give the face and neck the same color and finally PicGrunger to give an overall painterly effect. 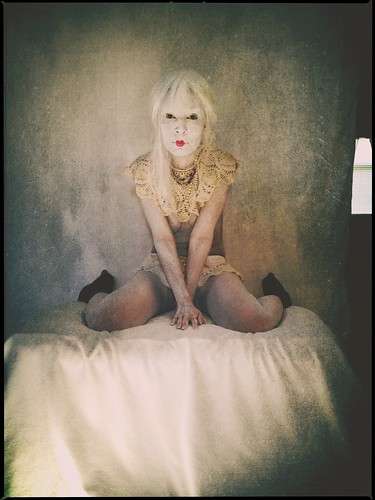