This week’s Apps Uncovered explores images that in some fashion feature curves and lines (including sight lines – the line implied by the direction of a glance) as a major thematic element or unifying force. Juta Jazz’s wonderfully evocative collage “accumulation” is the lead image for this week’s selection. 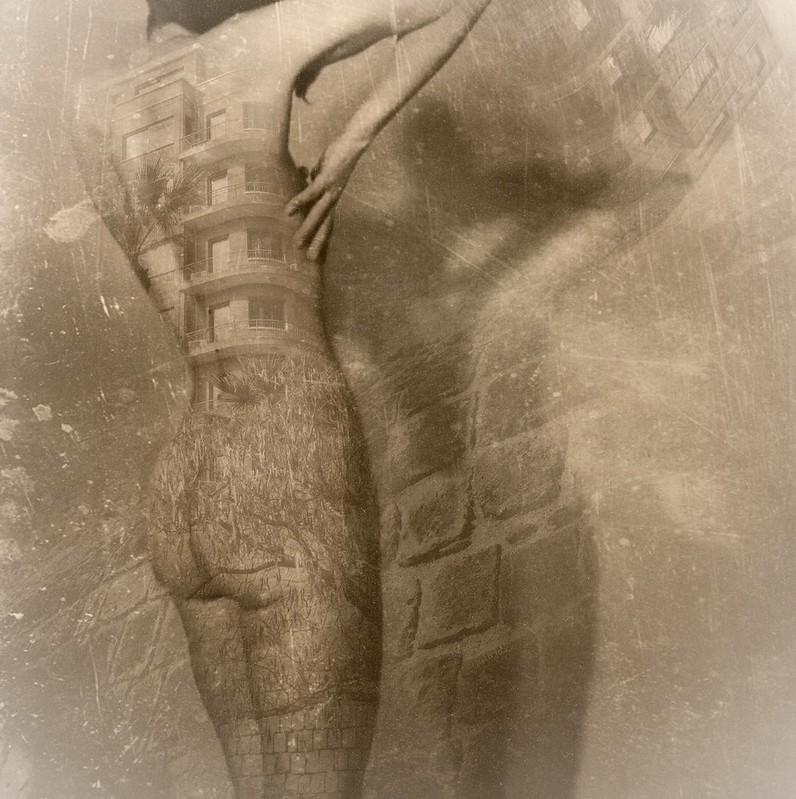 Backstory: The idea to create this image came from the suggested theme “accumulation” of Mr. Roger Quetta for the smART gallery album. Usually I like to edit more than shoot, so most of the times I use the earlier saved pictures from my library. It is self portrait and made with the iPad 4 device, the building shot I took with iPhone 4s. So for this image I use two pictures and few apps to get the results. 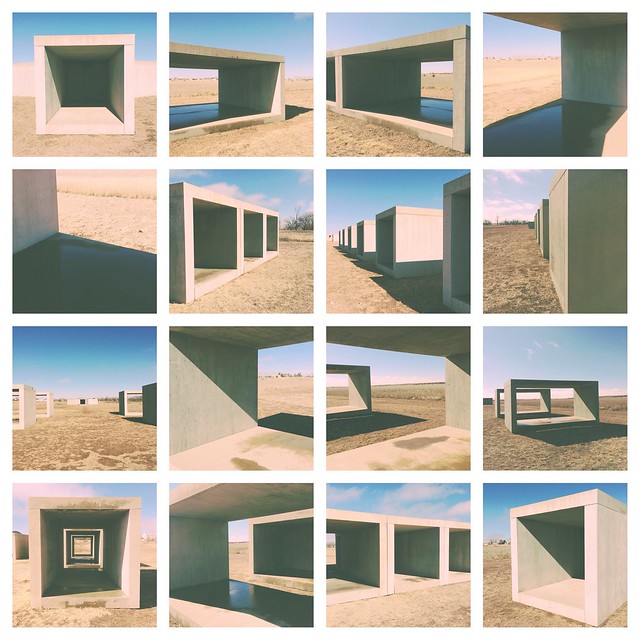 Backstory: These images were taken on a recent trip to Marfa, Texas to visit the Chinati Foundation which was set up by Donald Judd in the 1980s in an old military fort. It’s now a museum of minimalist art on a spectacular scale. These images were taken of the only work you are allowed to photograph: Donald Judd’s 15 untitled works in concrete which are placed carefully in a kilometre long field. Taken on a cold January day just as the sun came out and melted the early morning ice storm I selected a Hipstamatic combination which flattened and unified the colours. Once I saw them grouped together on my iPad I realised they were crying out to be composited and I used Pixlr to do that as it had a 4×4 grid. It all fell into place easily except the bottom left image which took a lot of choosing and was, in fact, the only image I had to edit. It just needed straightening a touch which I did in SKRWT. 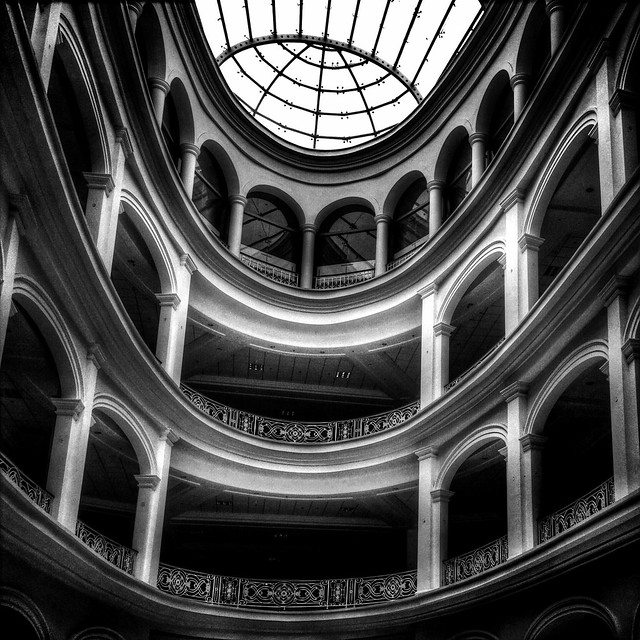 Not completely right by Tomaso Belloni

Backstory: This is an old iPhone 4s photo from 2012, the inside of a large building in Mysore, India, part of a big campus. I was attending a large conference and tried to capture the geometry of this big oval-shaped central room. I realized that a small deviation from the main axis would introduce interesting deformations to the otherwise symmetric structure, leaving the viewer disoriented.

Going through my archive a few days ago I found it and processed it with snapseed (basic adjustment) and oggl (for my favorite b/w combination: Akira lens and BlacKeys XF film).

Backstory: All my mobile photography is done with my Iphone 4s, although it seems like newer Iphones has better cameras, I appreciate the pictures with the noise and texture which emerges from using this camera.

All my pictures are captured with ProCamera and processed with Instagram, and I love working with the quadratic format this implies.

This photo was captured last week at work, where cascades of birds marked the promises of spring. The flock of birds is put in perspective of a neighboring house gable bringing a symmetry into the frame… 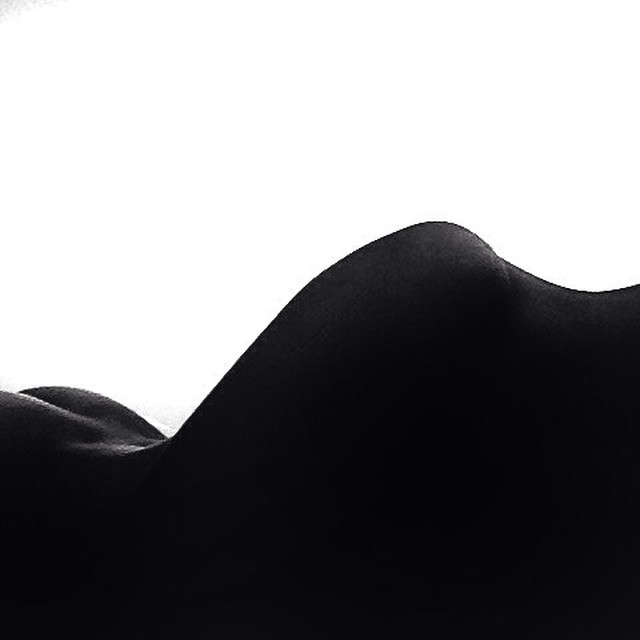 highs and lows by …storrao… 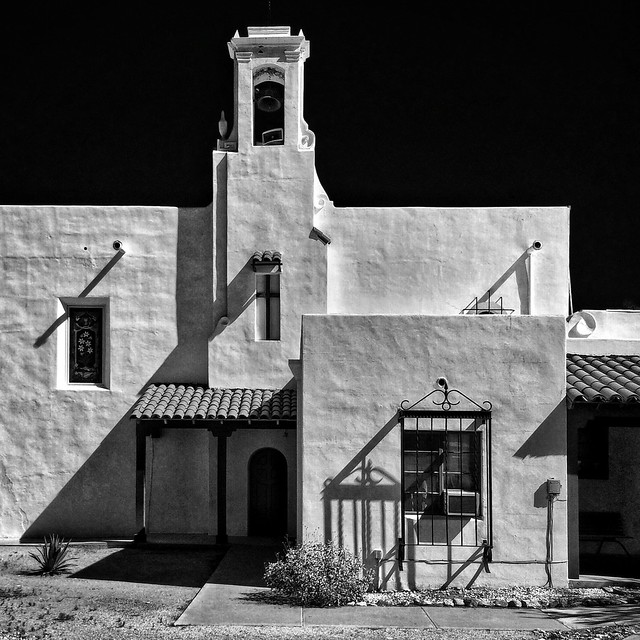 Backstory: For this scene from Ajo, Arizona, I used the PerspectiveCorrect app for some straightening, and then Snapseed for the rest.

Recently, I drove down to Organ Pipe National Monument to explore the unique desert landscape along the Arizona/Mexico border, and before driving home, I thought I’d take a detour to the old mining town of Ajo. Just off the central Spanish-style plaza (built in 1917), the mining company built two churches in the 1920’s (one Protestant, one Catholic) in mission style. This is a view of the rear of the Protestant structure. The afternoon light was perfect, picking up the texture of the whitewashed façade and creating rhythmical, crisp shadows at the perfect angle. While walking around town, I had the impression–due to the combination of desert light, classic architecture, and quiet streets–that I was walking inside a DeChirico painting. 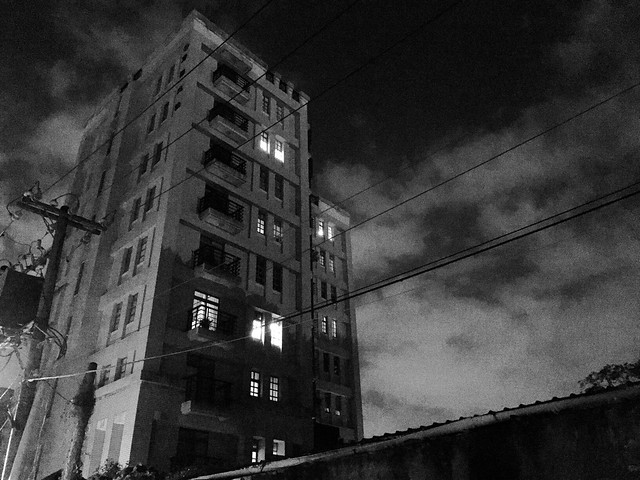 Backstory: One night in January, I walked in Shihlin, Taipei, Taiwan, searching for my motorcycle, I just forgot where I parked it！In the meantime, I raised my head noticing that clouds in the dim light was beautiful & the building also perfectly matched！（BTW, I just love to shoot the composition of sky, clouds and wires～:D～）After capturing this image, I stood on the street, spent some time editing it, tried to find better adujstments about light & colors. Finally, I thought the B&W is the best expression～! （& totally forgot I was there for searching my motorcycle. 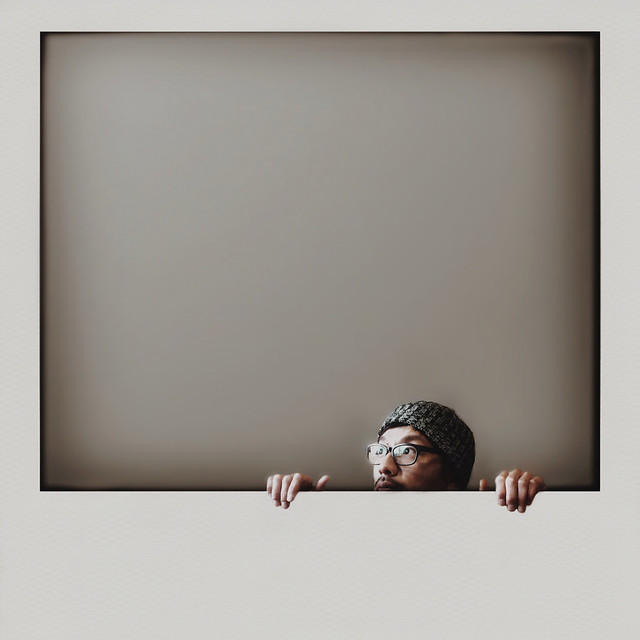 Backstory: This is my Polaroid people series #3. I’m looking at the outside world from inside of photo. 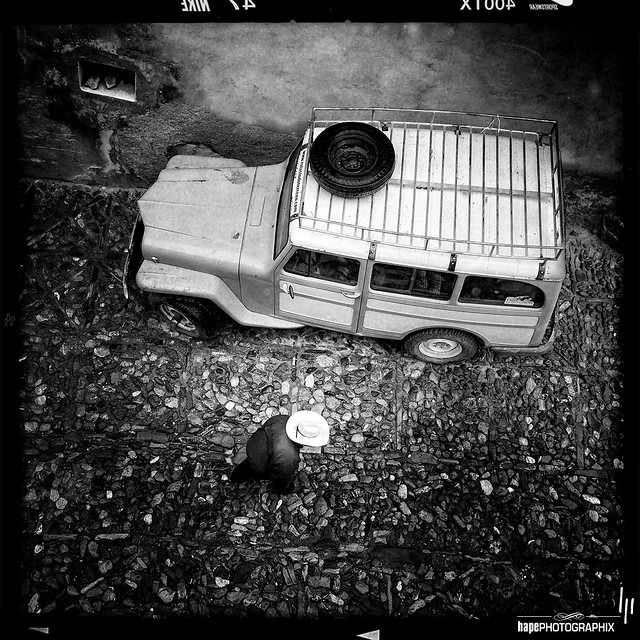 Apps used: ContrastPro in CAMERA+ and Hipstamatic processing (see below for details)

Backstory: It was on the second day of our trip to Real de Catorce, a scenic “pueblo magico” in San Luis Potosí, Mexico. Early morning I stepped out to the little balcony of the hotel room to check the weather conditions outside: cold, foggy with a little bit of rain. I was almost on my way back inside the room, when I saw the old man with his white hat walking slowly up the steep alley below the balcony. I figured out that he would make a good composition with the Willys vintage car parking below. As I was shooting the day before with the HIPSTAMATIC app in John S lens and AODLX film set up to support the ghost town scenery, I quickly decided to use the same app and set up again. So I grabbed my iPhone, waited until the man reached the car and then took the photo. 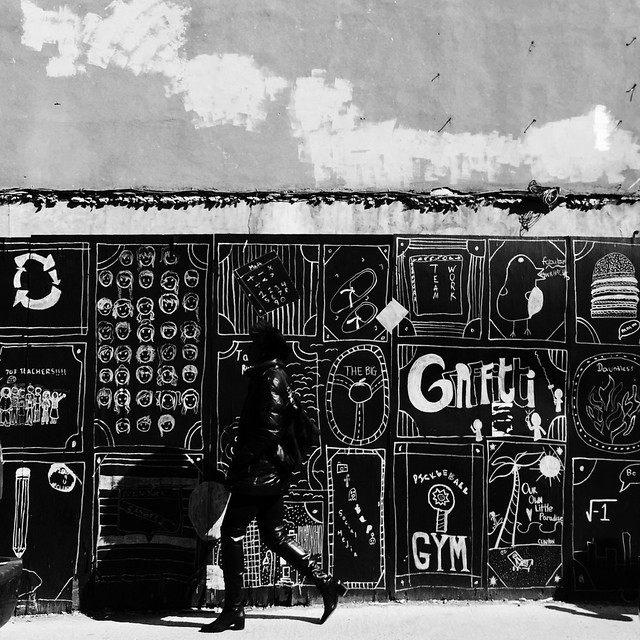 Backstory: It was a very bright day, which led to the incredibly high contrast of both the backdrop and the silhouette of the figure. I love how she stands out by disrupting the lines of the design behind her, and that the fake sky lends the image a sense of the surreal.

Should I Stay or Should I Go by Mateusz Sawicki

Backstory: This image was taken near my home town, Kędzierzyn-Koźle ( Southern Poland, Europe ). I was driving by with my mate, when I saw this beautiful, long, neverending road. I love that kind of roads, so I just had to capture it. By placing my mate in this scene I was trying to show the name of that image – Should I stay or should I go? We all have to answer that kind of questions everyday. 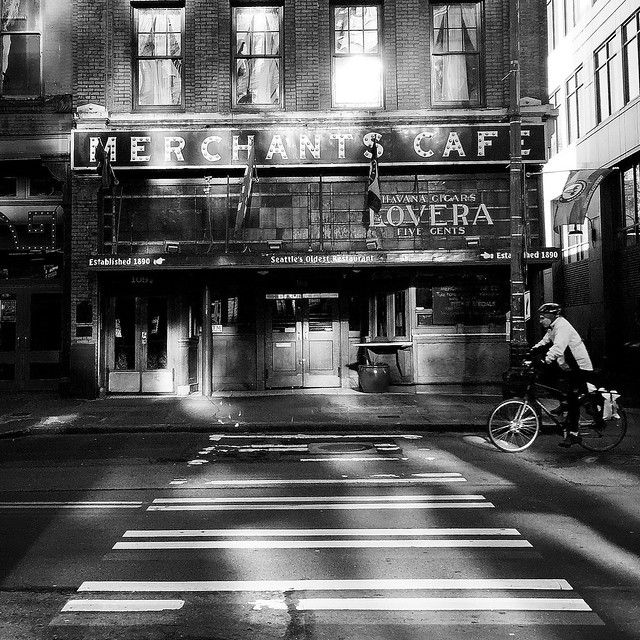 Backstory: I was walking through Pioneer Square in the morning (which seems to have created an interesting light effect with the rising sun partially obscured by the surrounding taller buildings). The Merchants Cafe is an interesting building, and I thought had a particularly historic feeling in the early morning with no one around. It was worth waiting for a person to happen by (in this case a cyclist), which added a little more interest to the scene. 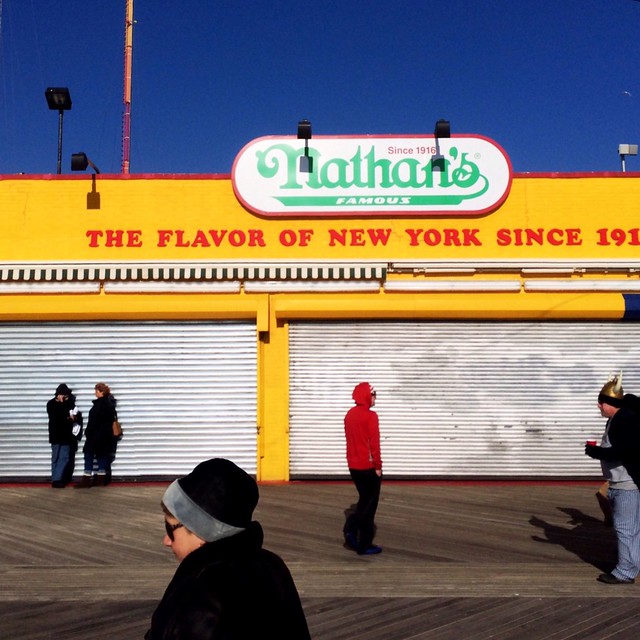 Apps used: I shot this image in Coney Island, Brooklyn with oggl, using the Lowy lens and BlankoFreedom 13 film.

Backstory: It was initially not as well-timed as it seems, so I initially dismissed the shot. I liked the planes of action, though, so came back to it and rearranged the figures slightly with juxtaposer to create the final image. It was New Year’s Day, day of the annual Polar Bear Swim in the Atlantic, which I hope explains the Viking hat.

Backstory: I made this photograph for fun while shooting a commercial assignment in Bali a couple of weeks ago. My crew and I were in the village of Munduk, on the edge of Lake Tamblingan in northern Bali, filming a scene as our main talent, Cazmir (pictured here) was shooting some stills. I was taken by the drama of the clouds behind Cazmir as a storm quickly closed in on us. I fired a few frames on my iPhone 5S and then we quickly gathered our equipment and ran for the van as the rain started to fall… I processed this image using Photoshop’s PS Express app and then tweaked it a little more using instagram’s in-app tools when posting it online.

Backstory: A portrait of Luka, my 9 year old boxer dog.