Welcome to the last Apps Uncovered of this year, 2015. It has been another amazing year for iPhoneography this year and Bob Weil and I are fortunate enough to see some of the most beautiful, thoughtful and creative mobile images in the world as we make our selections every week. Thank you to all of you who submit your images every week.

CSClarke612 steals the top spot this week with his wonderful image “Prime Seats”. As we wait for the New Year, I thought this to the perfect image to head up the rest of the great images in the group. This week, the top talent includes David DeNagel, Susan Blase, Michael Kistler, Luis, Scott Woodward, Mark Walton, Firery Broome, vadim demjianov, Lasteg Vadim and Brendan Ó Sé.

Sign up to our Newsletter.
This month saw the launch of our brand new Newsletter; an occasional newsletter that will be sent out to subscribers to let you know about the latest articles, competitions, tutorials and iPhone prizes to be won on iPC. A big thank you to the hundreds of you who have already subscribed and if you haven’t already subscribed, please click on the link below:

Thank you to everyone who submits to our weekly Flickr showcase. If you would like to be considered the weekly gallery, join our iPC Flickr group by clicking here Apps used: iPhone6 Native Camera. Snapseed.
Backstory: This was taken back in August when my wife and I were in the USA on a road trip around New England. We had spent the day in Provincetown, Cape Cod, and were on our way back to our hotel when we decided to pull over in Rock Harbor Creek and I was presented with this scene. I entered this in the prestigious TRAVEL PHOTOGRAPHER OF THE YEAR (TPOTY) competition in their new “Smart Phone Captured” category and was extremely pleased, in November, to hear that I was a shortlisted finalist. The winners were announced just last week. Unfortunately, my shot did not win. But I think it is fantastic that big competitions like this are now encouraging mobile photography entries.

Apps used: iPhone 6s Plus Camera,Faded, Snapseed
Backstory: There is a farm close to my home. The owner is good enough to allow me on his property to take pictures. This image occurred on a mild day in mid December. It was overcast and the farm animals were grazing. I shot from behind a barbed wire fence. However, what made the shot special to me was the sun, momentarily,broke thru the cloud cover and created a sort of golden mist & haze over the scene. I wanted very much to recreate this beautiful mood and atmosphere in the post processing. 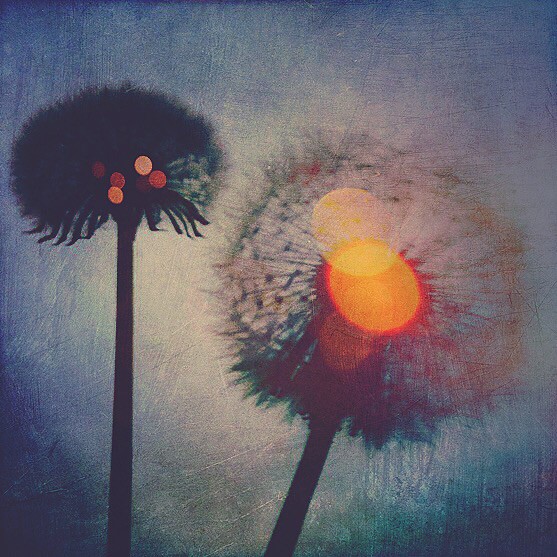 Apps Used: Hipsyamatic, Mextures and Lumie.
Backstory: First off, the photo goes way back to when I got into iPhoneography. I took it with Hipstamatic on random, when there was a fraction of combinations at my disposal as opposed to now. I also went back to using Lumie once I unearthed this old photo, an app I still love when I need to add some “magic” to a shot. That is where the “light” came from. It took me a while to get the right color and texture in Mextures, as I wanted to sort of echo my “Goodbye Butterfly” portrait. Normally these sort of creations don’t take that long but I messed with this forever it seemed! I’m happy with result. Have a lovely holiday everyone! 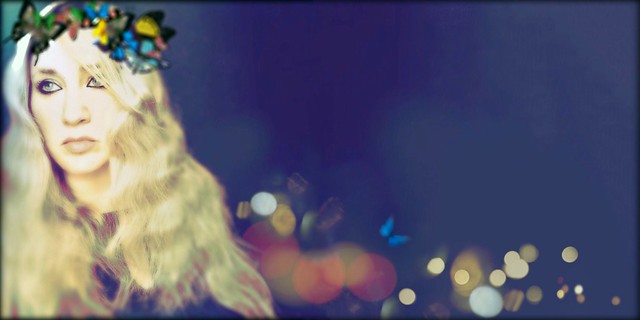 Apps Used: PicsArt and Lumie on iPhone
Backstory: This self portrait was meant to be more festive but I could not get the “stars” in my hair to look right. So I decided to go outside my comfort zone and see what I could use in PicsArt. Once I browsed for clip art, the song “Goodbye Butterfly” by Brian Jonestown Massacre came to mind. At first I pondered the usual symbolism associated with butterflies: beauty, freedom/flight, metamorphosis…

However as I listened to the song and edited the pic, I started to see two rather different sides as Anton Newcombe’s lyrics on album put me in mindframe of the butterfly. One who changes into this free, yet very delicate being who is surely aware of time and purpose. But his live versions (check out the Bataclan performance for example) made me sense the viewpoint of longing for this fragile beauty who is just out of reach from its captor. All the while questioning is it right to want to keep something that may or may not be better off free. I wanted to create a sense of movement with the bokeh and that lone butterfly after I stretched out the square snapshot using the collage feature. Result is completely different then I originally planned, however far more meaningful/personal. 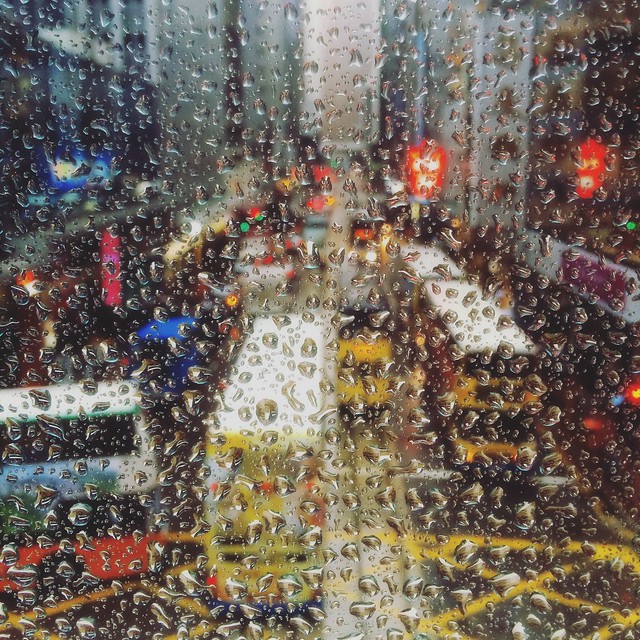 Apps used: Snapseed, cropped in Instagram
Backstory: I shot this image at one of my favorite locations in HK: an intersection in Central that I often revisit; I challenge myself to try to see and photograph it in new and different ways. On this day I really liked how the various lines, shapes and colours combined with the rain to create a watercolor effect. No special tips or tricks–I just focused on the water droplets and let everything below take shape through the filter of the glass. Minor tweaks of contrast and saturation in Snapseed and then cropped in Instagram. 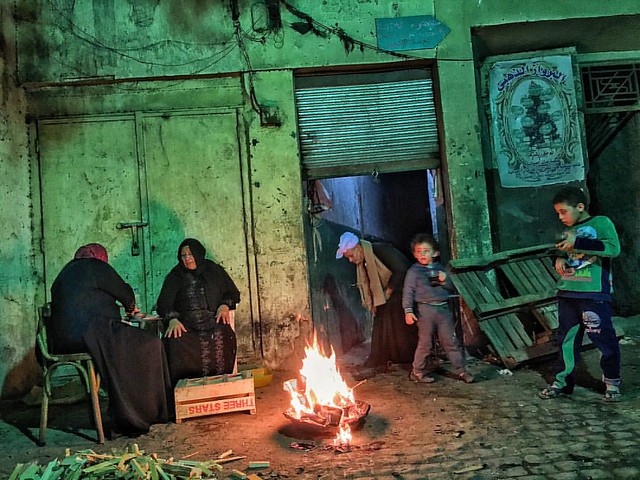 Apps used: I made this photograph at Khan el-Khalili in Cairo, Egypt using the in-camera photo app on my iPhone 6S and then processed the image using Snapseed.
Backstory: This was my first ever visit to Khan el-Khalili, a sprawling souk in the Islamic district of Cairo, and I was overwhelmed by the total and complete sensory overload I experienced; it was fantastic! There we so many photographs to make that I didn’t even know where to begin. But as I strolled down one of the bustling lanes, I noticed a family tucked into a tiny path off to the side surrounding a crackling fire. It was a beautiful little scene, and I quickly fired off three or four candid shots and then proceeded on my way through the labyrinthine cobblestone alleys.

Apps used: straight out of the iPhone 5s 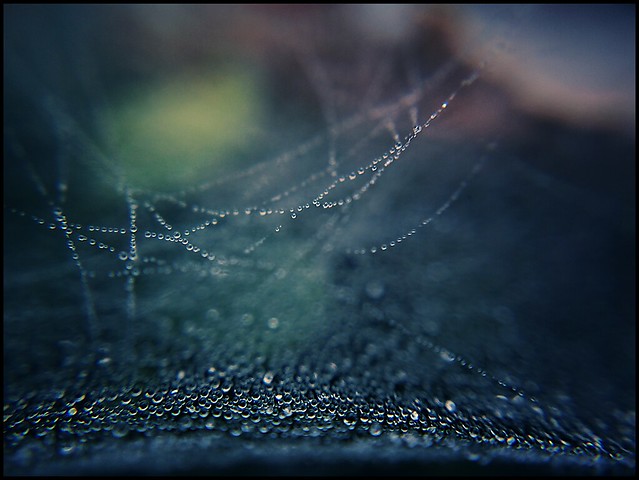 Apps used: Captured with the usual iPhone 5s and Olloclip Macro lens, edited on the iPad in Snapseed.
Backstory: Captured yesterday for 100×2015 theme for the week, Tranquil. While wandering around campus I noticed lots of spiderwebs in the evergreen shrubbery as well as some faded autumn leaves trapped in the branches. We had some light rain which trapped the little misty beads of rain like jewels of sparkling light. 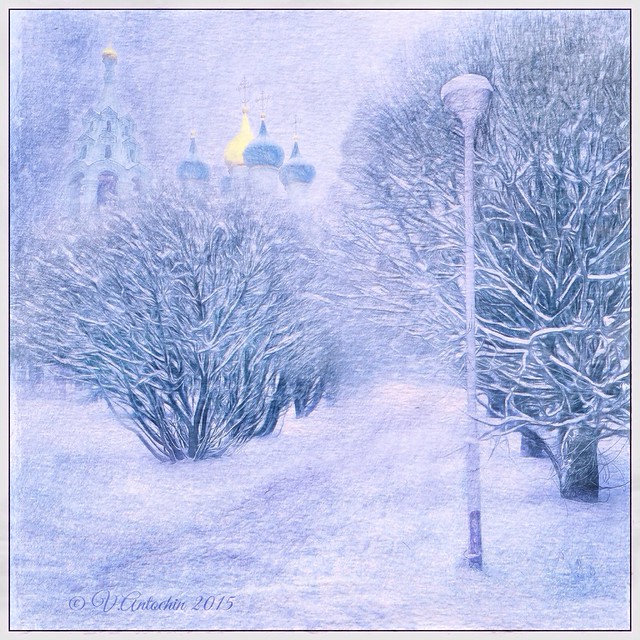 Apps used: I was fascinated by the first snow fell. I used the apps I regularly use which are Snapseed and iColorama. 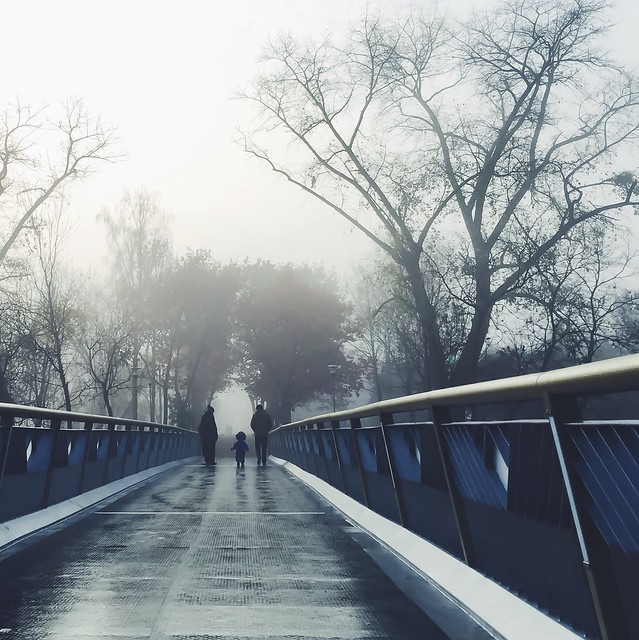 Apps used: PS Express + VSCOcam
Backstory: One day in the morning I looked into the window and was stunned by the fog. So I went down to the local park in Gomel, Belarus and have spend there like couple of hours taking pictures. Crossing one bridge I’ve noticed a family in front of me and decided that they can be a part of the picture. I’ve started to play with the angle and the picture you see was the one I’ve decided to be the best.

Apps used: This was one of the very first images I took with my new iPhone 6s.
Backstory: I was killing time waiting for my daughter while she was at music lessons. I went for a short walk looking for photo opportunities. Very often these do not appear in front of you, so don’t forget to look up. I found these birds perched on the wires of a suspension bridge, somehow unaffected by the gale force winds. I like the simplicity of the composition and the resolve of the birds.